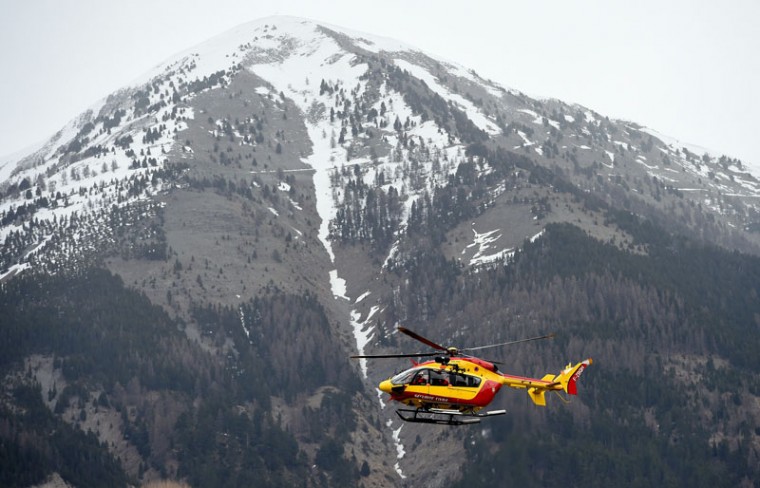 A helicopter of civil security services is seen in Seyne, south-eastern France, on Tuesday near the site where a Germanwings Airbus A320 crashed in the French Alps. A German airliner crashed near a ski resort in the French Alps on Tuesday killing all 150 people on board, in the worst plane disaster in mainland France in four decades. (CHRISTINE POUJOULAT/AFP/Getty Images) 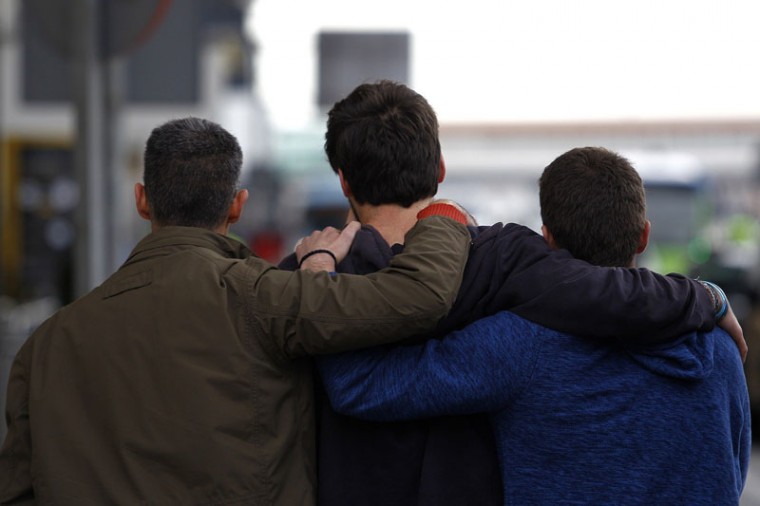 Family members of an aircrash victim embrace at Barcelona’s El Prat airport on Tuesday after a Germanwings airliner crashed near a ski resort in the French Alps with all 148 people on board feared dead, officials said. The plane, travelling from the Spanish coastal city of Barcelona to the German city of Duesseldorf, issued a distress call at 10:47 a.m., sources said. (QUIQUE GARCIA/AFP/Getty Images) 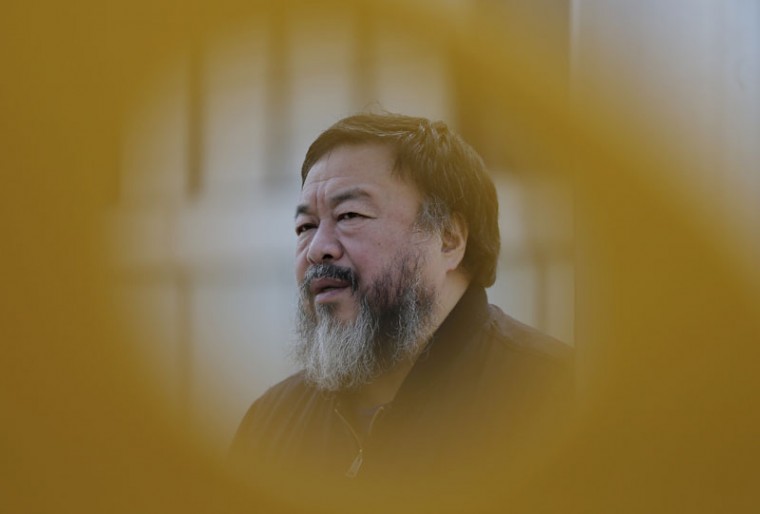 Chinese dissident artist Ai Weiwei speaks during an interview near a playground outside a shopping mall in Beijing on Tuesday. Amnesty International awarded its top honor Tuesday to Ai Weiwei, who has spent years shining light on his country’s restrictive political atmosphere, and to U.S. folk singer Joan Baez for her civil rights activism. (Andy Wong/AP) 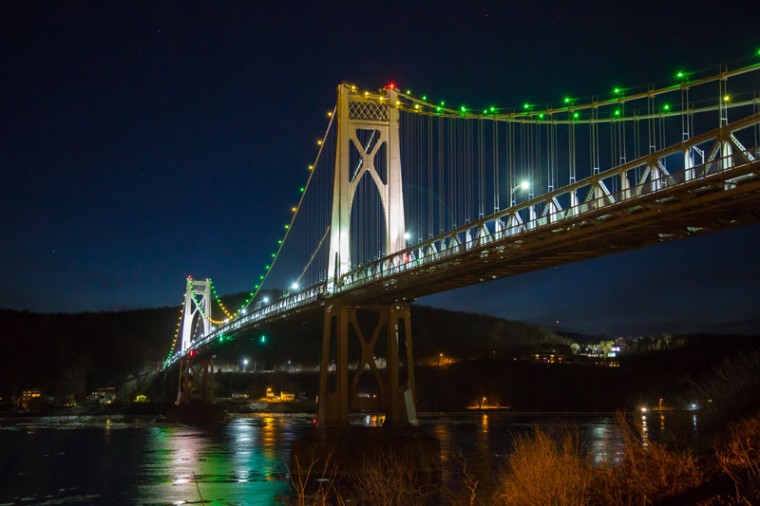 The Mid-Hudson Bridge is illuminated to shine light on the Ebola crisis and show solidarity with West Africa as part of the #TackleEbola campaign on Monday in Poughkeepsie, New York. (Kenneth Gabrielsen/Getty Images) 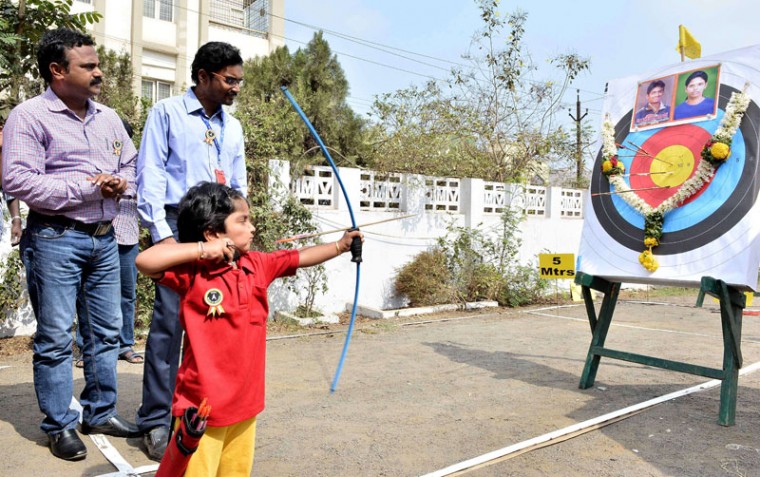 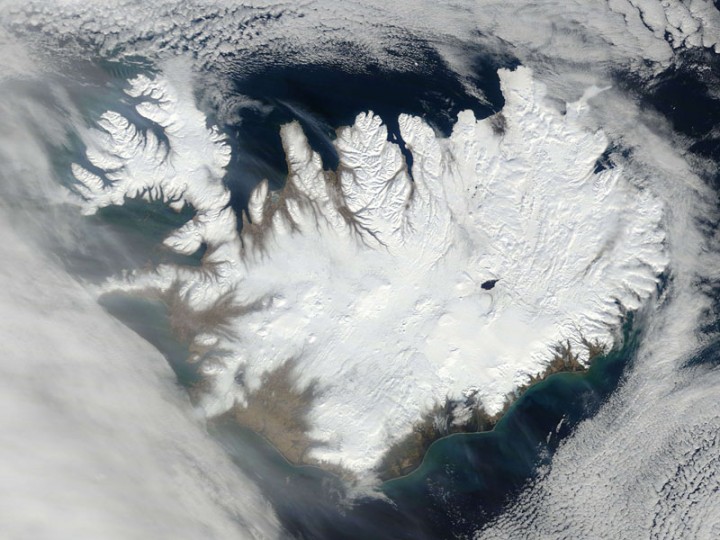 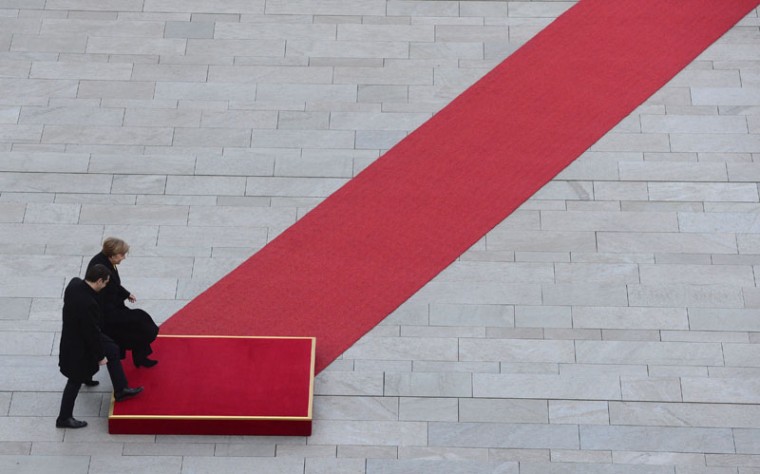 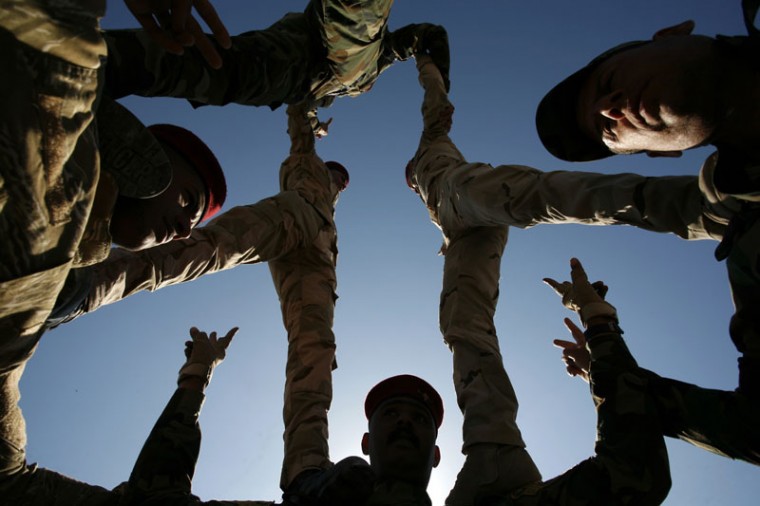 Iraqi Shiite fighters from the Popular Mobilisation units, part of the Zahraa Brigade, take part in a training exercise in the central Iraqi city of Kufa, some 100 miles south of Baghdad, on Monday. (HAIDAR HAMDANI/AFP/Getty Images) 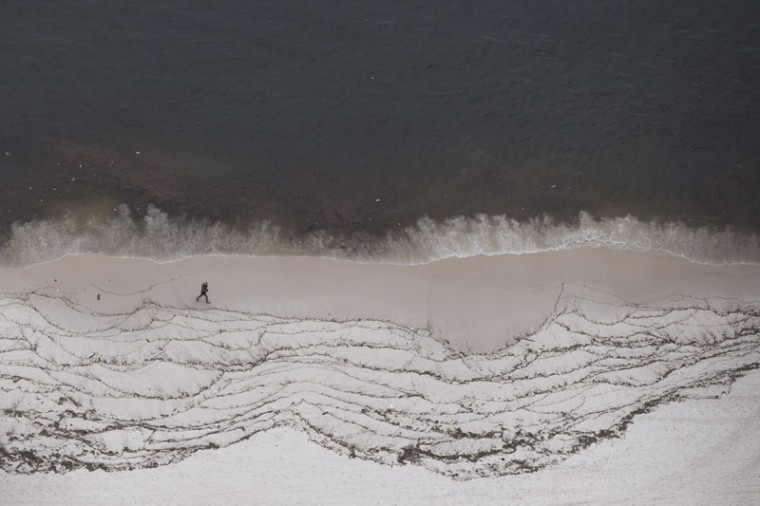 A man walks on the shore of Icarai Beach in Niteroi, across the bay from Rio de Janeiro, Brazil, on Monday. Rio de Janeiro’s mayor acknowledged in a television interview Monday that the run-up to the 2016 Olympic Games has proven a wasted opportunity to clean up the city’s blighted waterways. (Felipe Dana/AP) 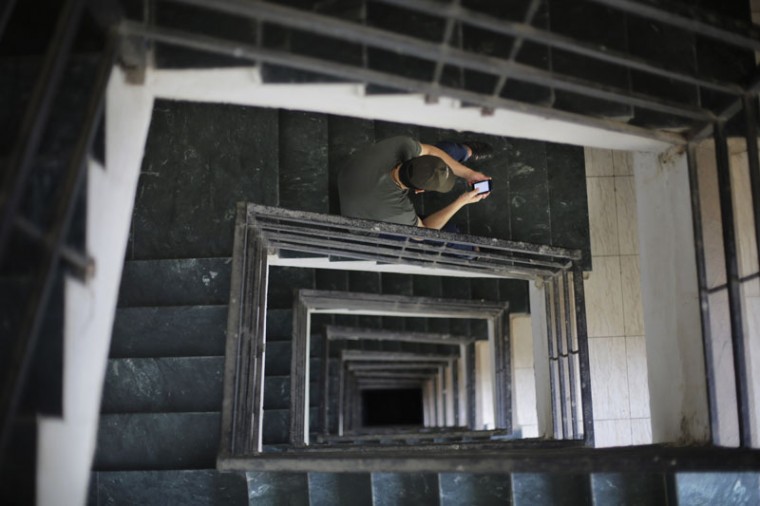 An Indian man sits on a hospital stairs and looks at his smartphone in New Delhi, India, on Tuesday. India’s top court reaffirmed people’s right to free speech in cyberspace Tuesday by striking down a provision that had called for imprisoning people who send “offensive” messages by computer or mobile phone. The provision, known as Section 66A of the 2008 Information Technology Act, says sending such messages is a crime punishable by up to three years in prison. (Altaf Qadri/AP) 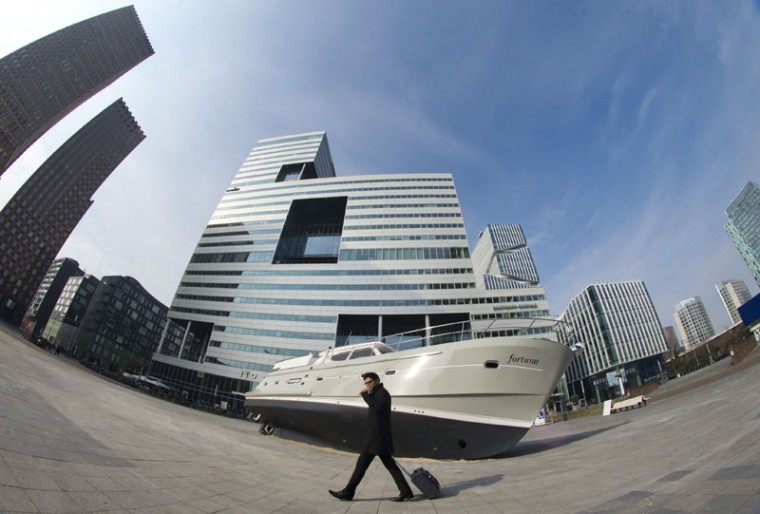 In this photo taken with a wide angle lens, a traveler passes an artwork of a boat structure called “Fortuna” by Dutch contemporary artist Leonard van Munster in Amsterdam, on Tuesday. The site-specific artwork named after the Roman goddess of chance, stands for the turbulent times in which our society finds itself, the ship on its side cannot sail, but might sail again one day. (Peter Dejong/AP) 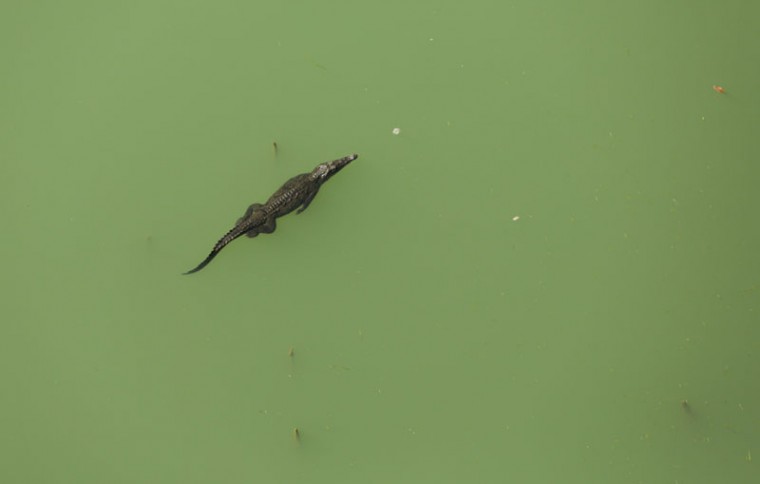 This aerial view shows an alligator swimming in the waters of the Panama Canal, near Gatun, Panama, on Monday. (Arnulfo Franco/AP) 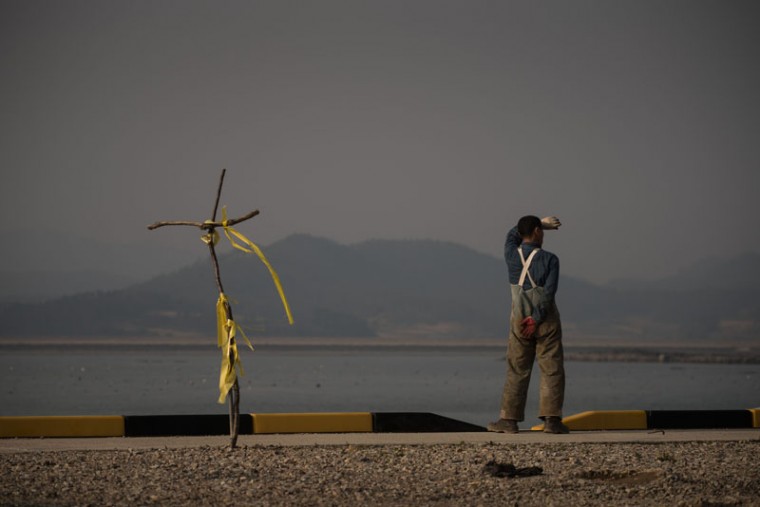 In a photo taken on Friday, a habor worker stands beside a cross adorned with yellow ribbons at Paengmok harbor, near the site of the sunken Sewol ferry, on Jindo island, on the southern tip of the South Korean peninsula. South Korea is preparing to mark the first anniversary of the April 16, 2014, Sewol ferry disaster, which was carrying 476 people when it capsized off the southern island of Jindo. Of the 304 who died, 250 were students from the same high school. The tragedy — blamed by many on regulatory failings, official incompetence and the ship’s illegal redesign — plunged the nation into a lengthy period of mourning. (ED JONES/AFP/Getty Images) 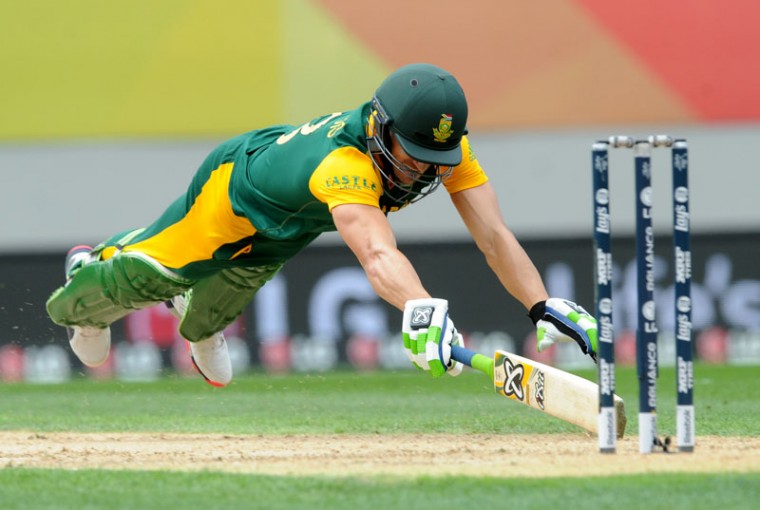 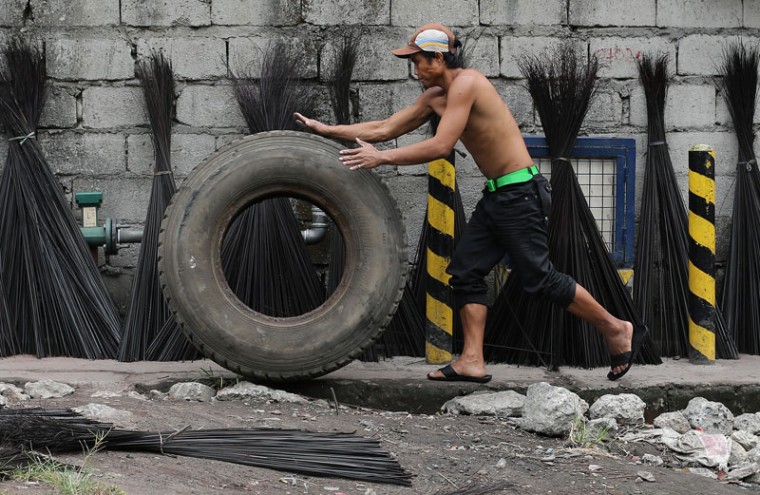 A Filipino pushes a used truck tire past handicraft materials that are being dried beside a road in Navotas city, north of Manila, Philippines on Tuesday. (Aaron Favila/AP)