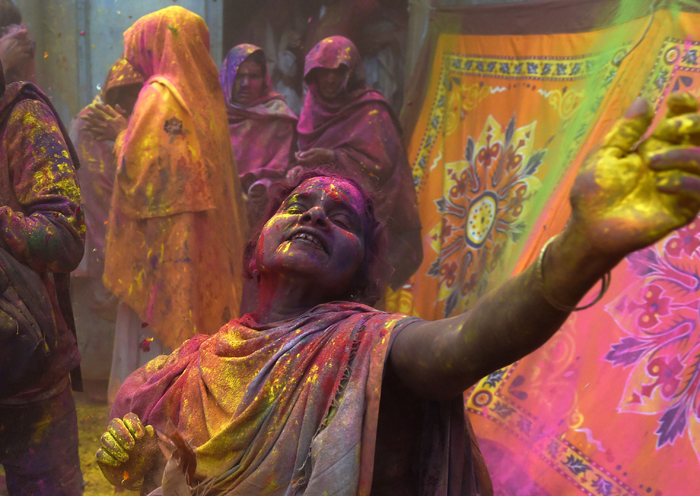 An Indian widow dances as they celebrate Holi or “festival of colors” in Vrindavan on Tuesday. Widows congregated on a small (ROBERTO SCHMIDT/AFP/Getty Images) 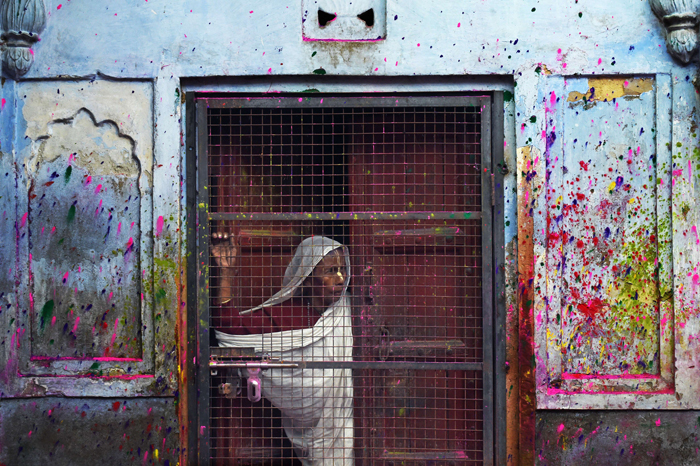 An Indian widow watches as others dance as they celebrate Holi or “festival of colors” in Vrindavan on Tuesday. Widows congregated on a small patio of the ashram in which they live and danced and played with colored powder to celebrate the occasion. The widows of this and other ashrams in this northern town are sponsored by the NGO Sulabh International, which funds most of their needs. Shunned from society when their husbands die, not for religious reasons, but because of tradition, many Indian widows have been otracized from society and no longer live with their families and are forced to beg for food. Almost 2,000 of the estimated 34 million widows currently living in India live in Vrindavan and benefit from the welfare extended by the NGO. (ROBERTO SCHMIDT/AFP/Getty Images) 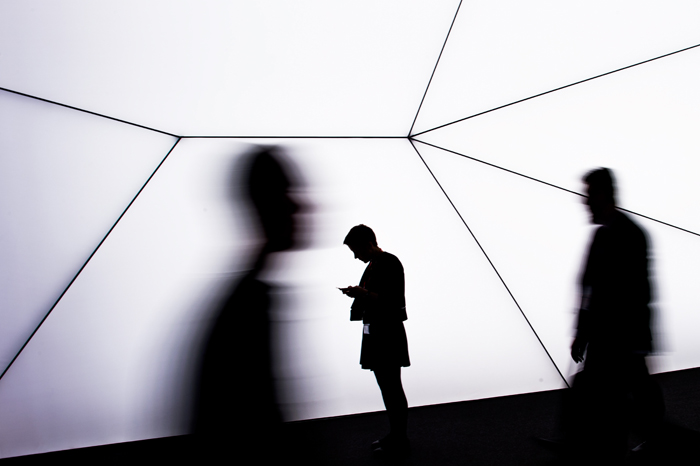 A visitor checks her phone during the second day of the Mobile World Congress 2015 at the Fira Gran Via complex on Tuesday in Barcelona, Spain. The annual Mobile World Congress hosts some of the world’s largest communication companies, with many unveiling their latest phones and wearables gadgets. (David Ramos/Getty Images) 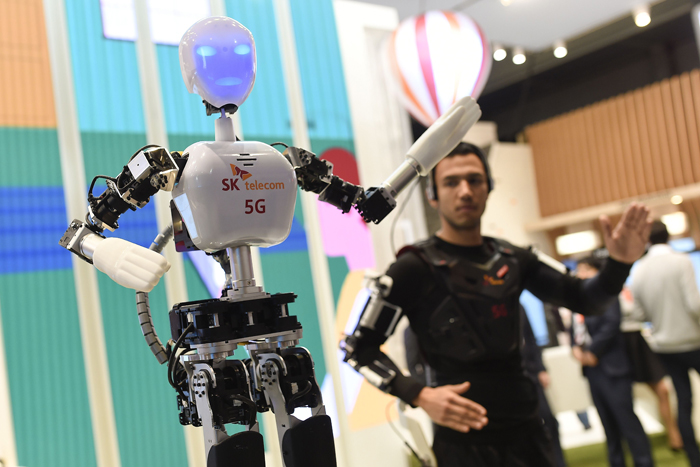 A man operates an SK telecom robot during the 2015 Mobile World Congress in Barcelona on March 3, 2015. Phone makers will seek to seduce new buyers with even smarter Internet-connected watches and other wireless gadgets as they wrestle for dominance at the world’s biggest mobile fair. (JOSEP LAGO/AFP/Getty Images) 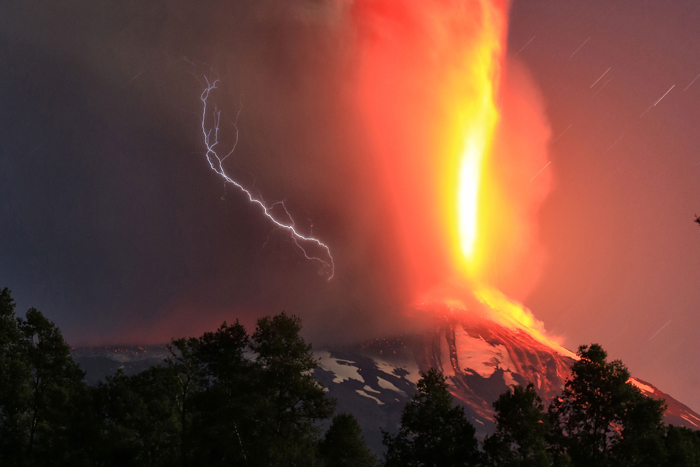 Picture released by Atonchile showing the Villarrica volcano, 1200 km from Santiago, in southern Chile, which began erupting on Tuesday, forcing the evacuation of some 3,000 people in nearby villages. The Villarrica volcano, one of Chile’s most active, began erupting around 3 a.m., prompting authorities to declare a red alert and cancel classes in schools, the National Emergency Office said. (CARLOS ROCUANT/AFP/Getty Images) 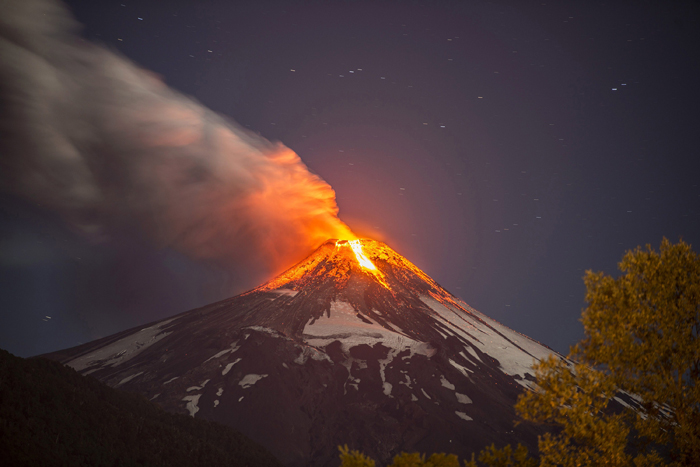 View of the Volcano Villarrica in southern Chile which began erupting on Tuesday forcing the evacuation of some 3,000 people in nearby villages, the government said. The Villarrica volcano, one of Chile’s most active, began erupting around 3 a.m., prompting authorities to declare a red alert and cancel classes in schools, the National Emergency Office said. (FRANCISCO NEGRONI/AFP/Getty Images) 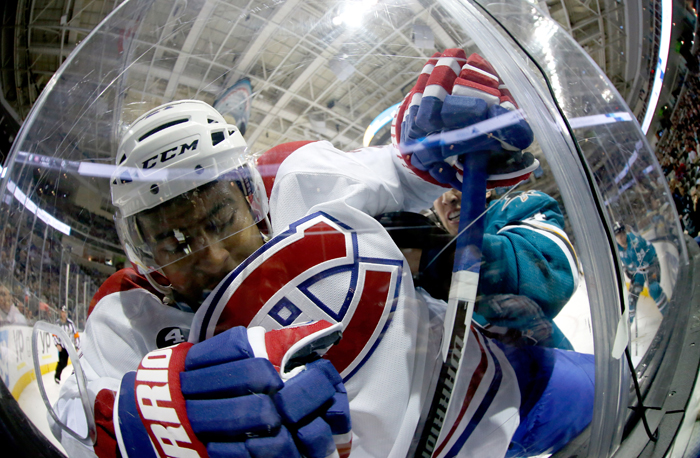 Devante Smith-Pelly of the Montreal Canadiens is checked into the glass by Brenden Dillon of the San Jose Sharks at SAP Center on Monday in San Jose, California. (Ezra Shaw/Getty Images) 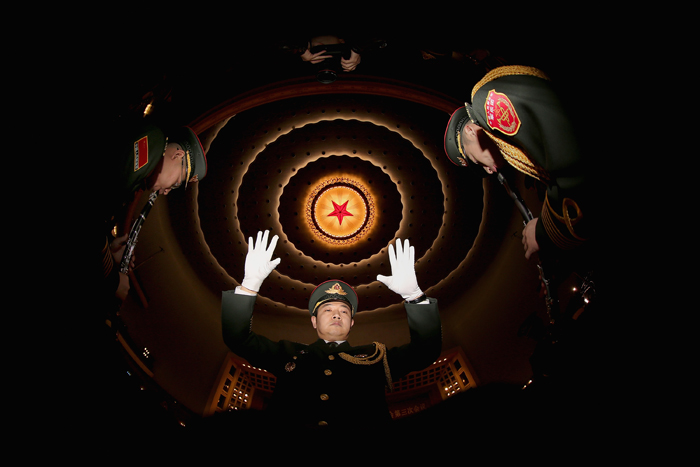 A conductor of a military band performs during a rehearsal before the opening session of the Chinese People’s Political Consultative Conference at the Great Hall of the People on Tuesday in Beijing, China. Over 2,000 members of the 12th National Committee of the Chinese People’s Political Consultative, a political advisory body, are attending the annual session, during which they will discuss the development of China. (Feng Li/Getty Images) Editor’s note: Image was created using a fisheye lens. 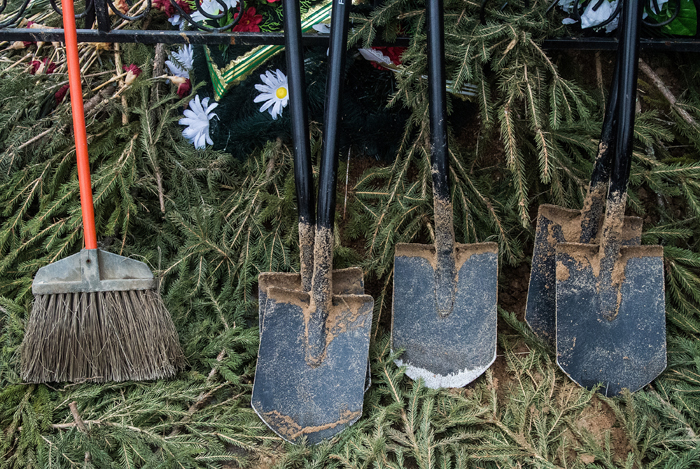 Shovels stand near the grave of Russian opposition leader Boris Nemtsov at Troyekurovskoye Cemetary on Tuesday in Moscow. Nemtsov was murdered on the Bolshoi Moskvoretsky bridge near St. Basil cathedral just few steps from the Kremlin on Feb. 27. Nemtsov, a fierce critic of President Vladimir Putin, was shot dead ahead of a major opposition rally this weekend. (Alexander Aksakov/Getty Images) 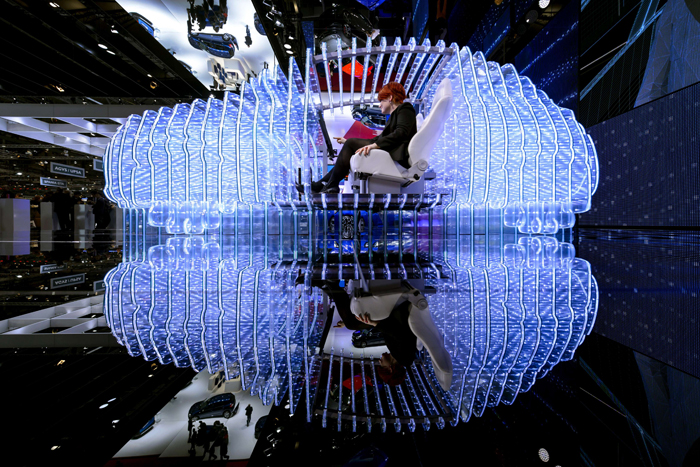 A woman poses inside the mockup of a car at the Opel booth during the press day of the Geneva Car Show on Tuesday in Geneva. The show runs through Thursday. (FABRICE COFFRINI/AFP/Getty Images) 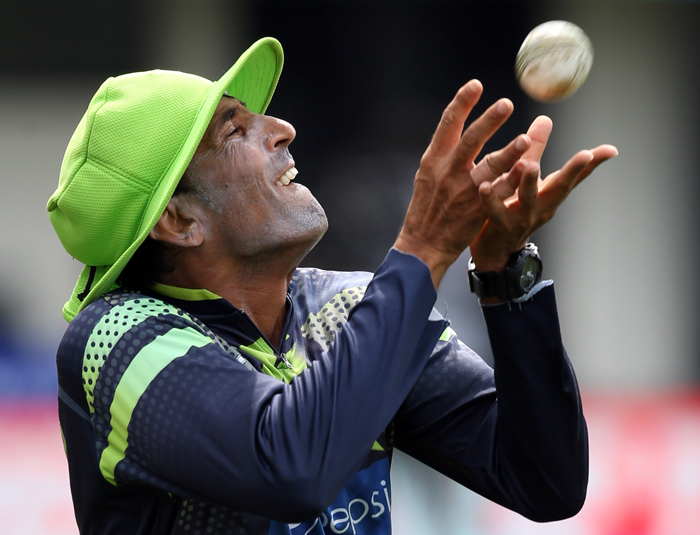 Pakistan’s Younus Khan catches the ball during a training session ahead of their 2015 Cricket World Cup Group B match against United Arab Emirates in Napier on Tuesday. (MICHAEL BRADLEY/AFP/Getty Images) 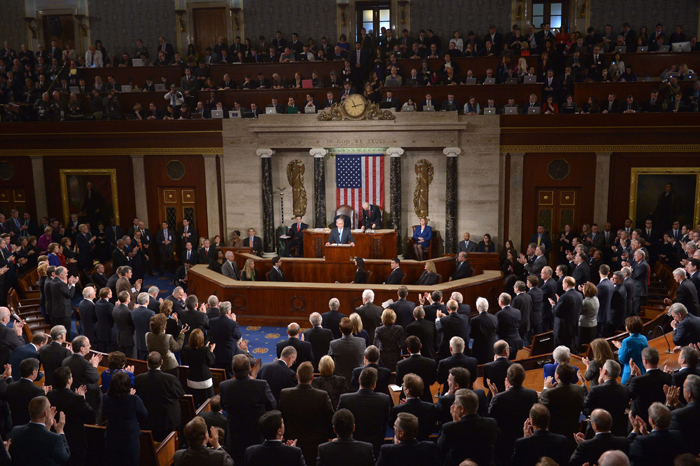 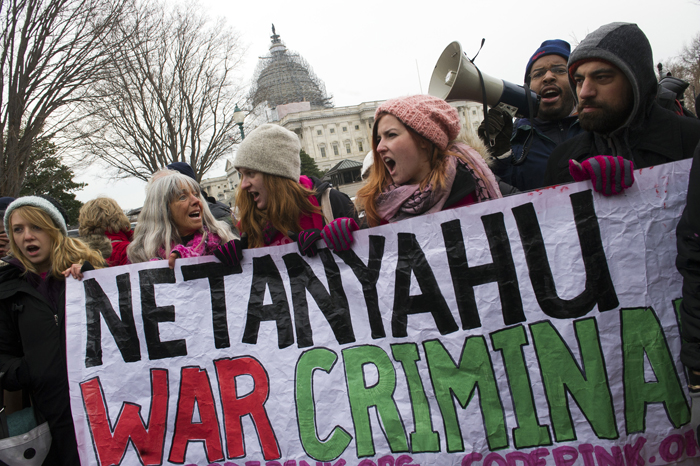 Demonstrators calling for a free Palestine march on Capitol Hill in Washington on Tuesday before Israeli Prime Minister Benjamin Netanyahu’s address to a joint meeting of Congress. (Cliff Owen/AP) 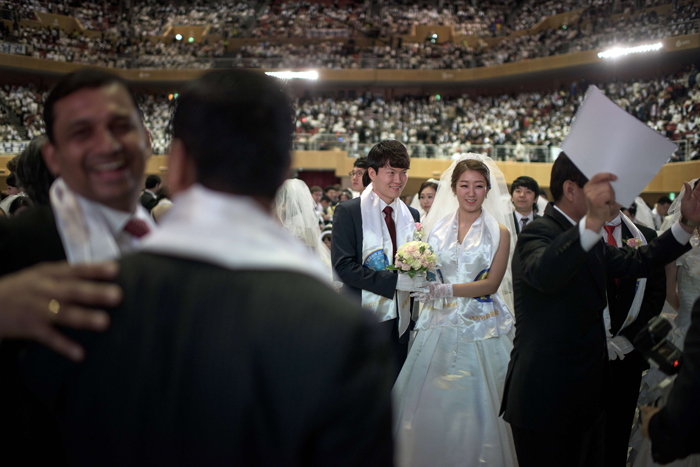 Park Hyun-Sung, 31, and his bride, Park Jeong-Min, 28, wait for the start of proceedings at their seats in the venue of their mass wedding ceremony, at the headquarters of the Unification Church in Gapyeong early on Tuesday. Some 3,800 couples participated in the ceremony in Gapyeong, east of the capital Seoul. The church’s mass weddings began in the early 1960s and at first involved just a few dozen couples, though numbers mushroomed over the years. The teachings of the Unification Church are based on the Bible but with new interpretations. The late founder Sun Myung Moon saw his role as completing the unfulfilled mission of Jesus to restore humanity to a state of “sinless” purity. (ED JONES/AFP/Getty Images) 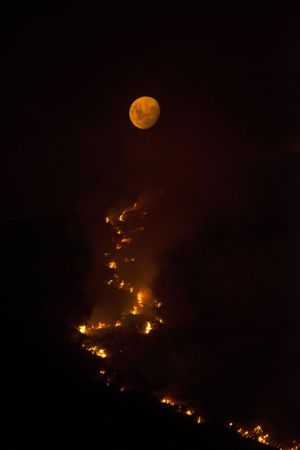 The moon rises above a fire in the mountains in Hout Bay, which was part of a larger bush fire raging in the mountains on the Cape Peninsula, on Monday, in the greater Cape Town area. (RODGER BOSCH/AFP/Getty Images) 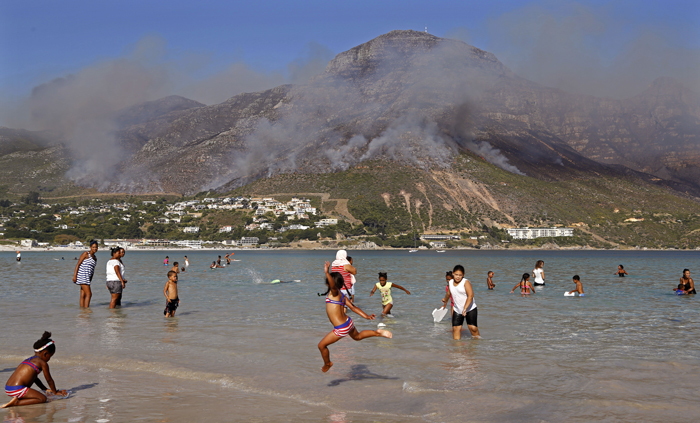 Children swim as the remainder of a fire burns at Hout Bay on the outskirts of the city of Cape Town, South Africa, on Tuesday. (Schalk van Zuydam/AP) 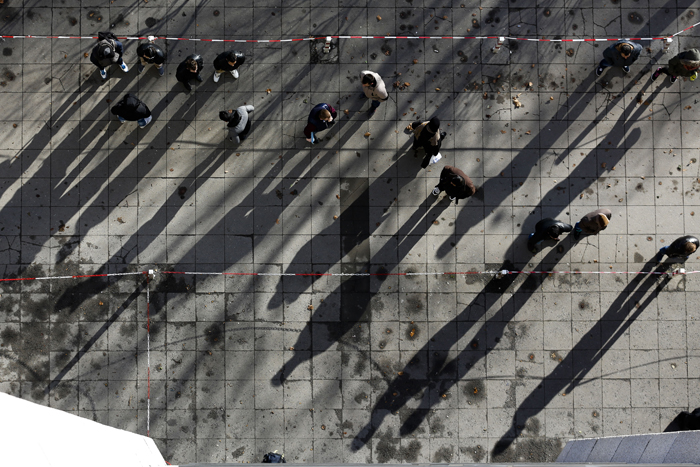 Refugees cast shadows as they are waiting in front of the central reception center for asylum seekers in Berlin on Tuesday. A growing number of refugees are expected in Germany in 2015. Most of the people who want to ask for asylum in Germany have to make the application at this center. (Markus Schreiber/AP) 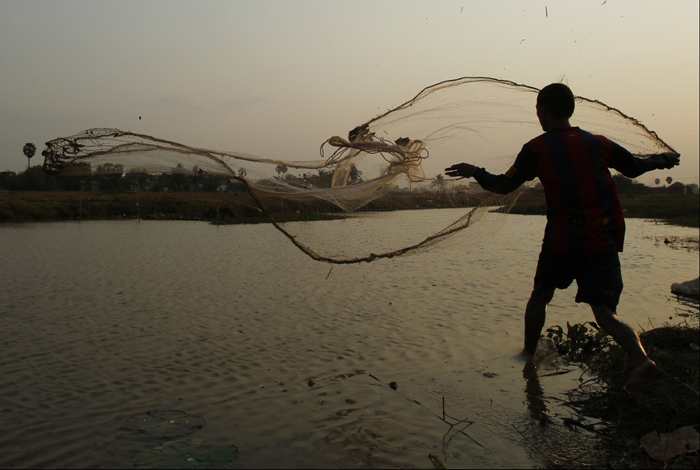 A fisherman throws his net onto a pond at Samroang Kroam village at the outskirt of Phnom Penh, Cambodia, on Tuesday. (Heng Sinith/AP)

« Wildfires in the mountains of Cape Town » Goblin shark in Australia, 18-foot oarfish and other odd fish