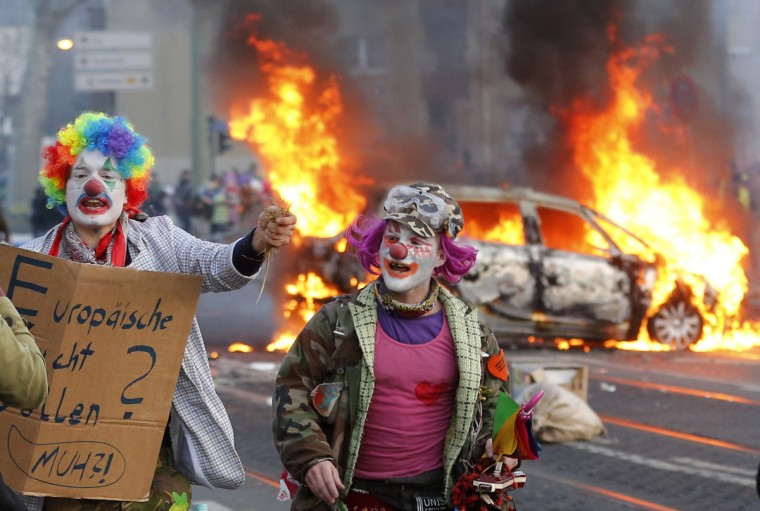 Demonstrators dressed as clowns pass by a burning police car Wednesday, March 18, 2015 in Frankfurt, Germany. Blockupy activists try to blockade the new headquarters of the ECB to protest against government austerity and capitalism. (AP Photo/Michael Probst) 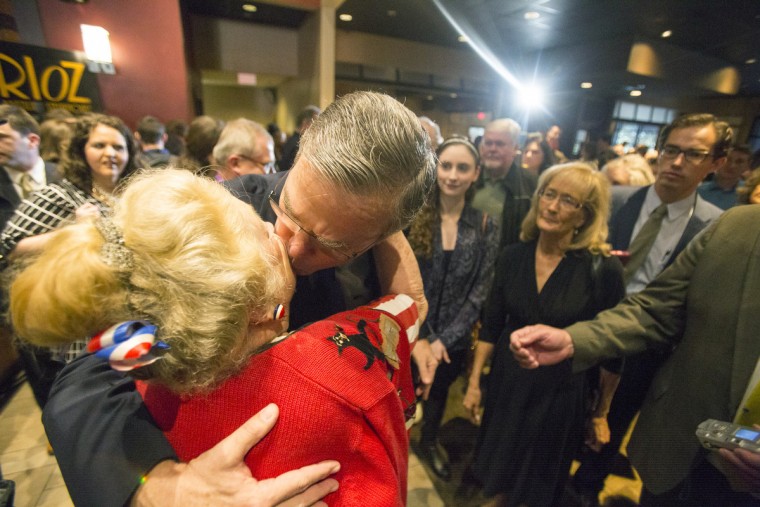 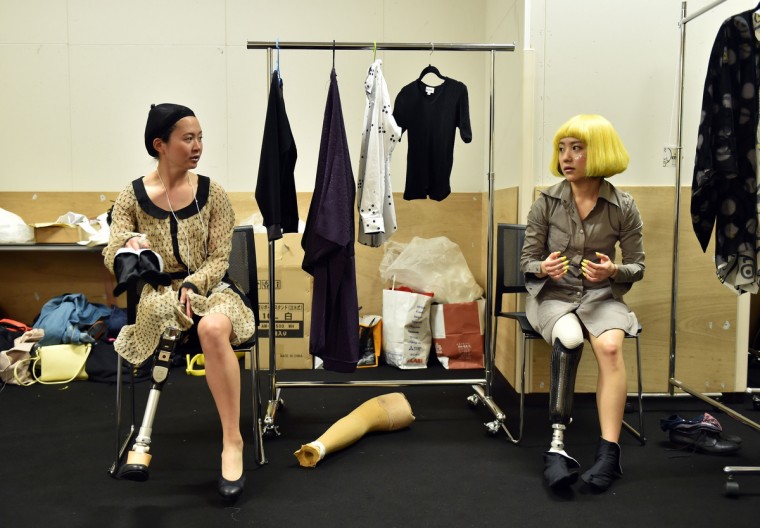 Paralympic athlete Sayaka Murakami (L) and Paralympic snowboarder Mika Abe (R) chat as they wait backstage to take part in a fashion show for the “tenbo” brand, designed by Japanese designer Takafumi Tsuruta, during the Tokyo Fashion Week’s 2015-16 autumn/winter collection in Tokyo on March 18, 2015. Tsuruta designed the line of outfits for all people, including those with disabilities, using items such as magnetic buttons for users to put and take off clothes easily. (Yoshikazu TSuno/Getty Images) 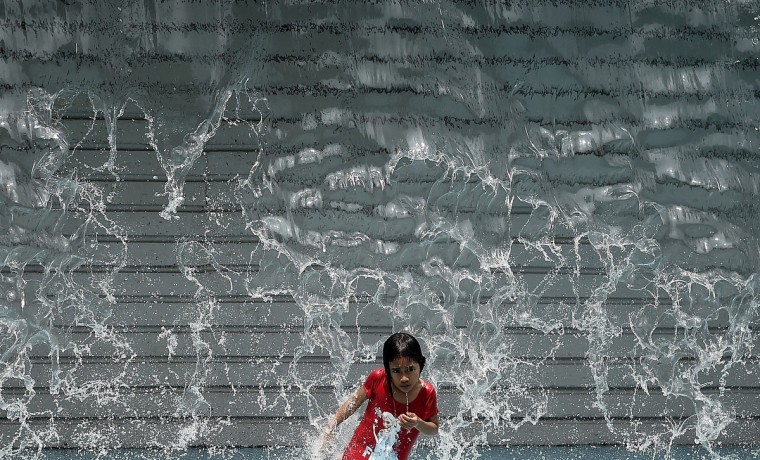 A young girl plays in an artificial waterfall on a hot day in Kuala Lumpur on March 18, 2015. Malaysia is currently experiencing a hot and dry weather spell. (Manan Vatsyayana/Getty Images) 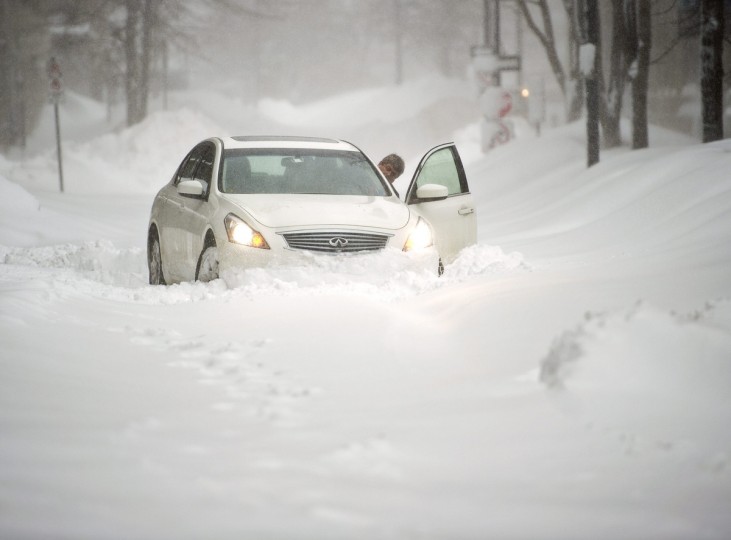 A motorist attempts to move his car in Halifax, Canada on Wednesday, March 18, 2015. Transportation has been disrupted, community events canceled and businesses closed across the Maritimes as the region is hit with another late winter storm. (AP Photo/The Canadian Press, Andrew Vaughan) 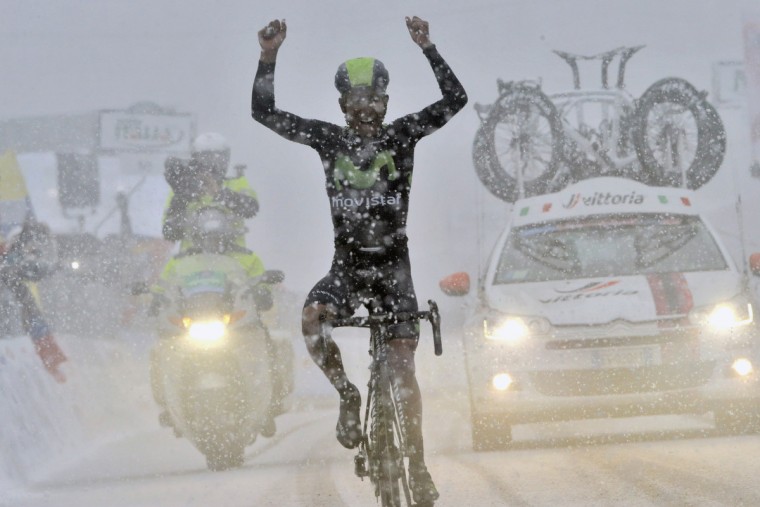 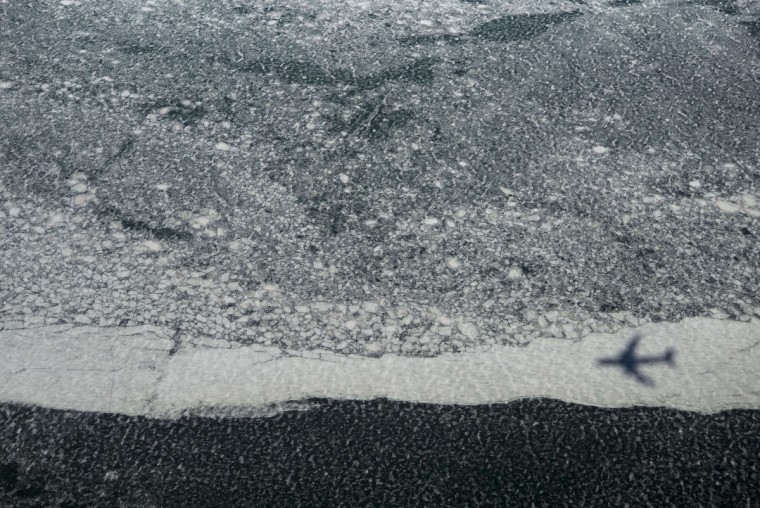 Air Force One’s shadow is seen as on a frozen Lake Erie as it transports US President Barack Obama to Cleveland-Hopkins International Airport March 18, 2015 in Cleveland, Ohio. Obama is traveling to Ohio to speak about the economy. (Brendan Smialowski/Getty Images) 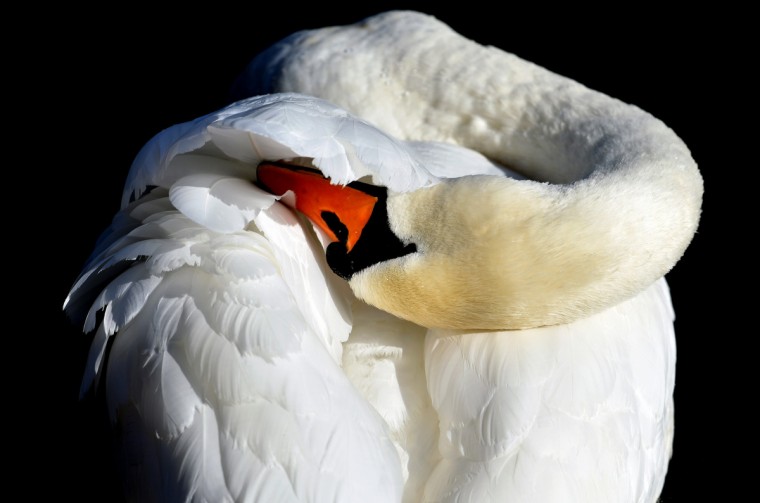 A mute swan cleans its plumage on the river Havel in Potsdam, eastern Germany, on March 18, 2015. (Ralf Hirschverger/Getty Images) 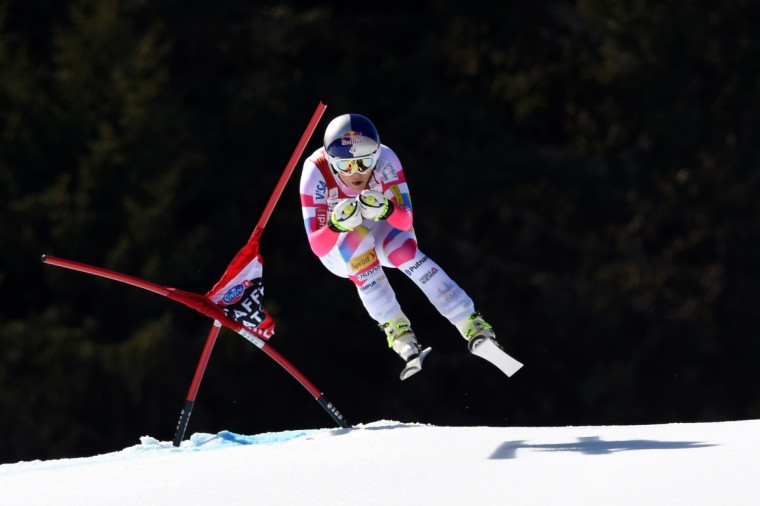 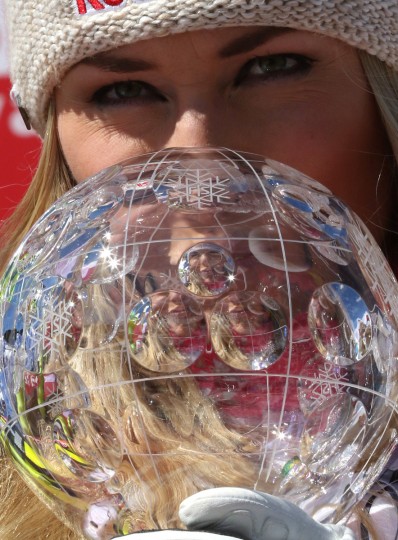 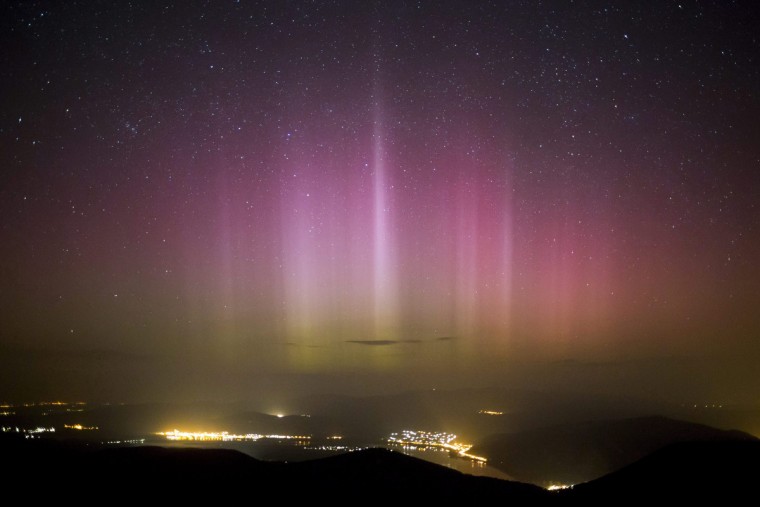 The Northern Lights (Aurora borealis) are seen on the sky above Pilisszentkereszt, 26 kms north of Budapest, Hungary, Wednesday morning, March 18, 2015. Photo was taken from the viewpoint of Dobogoko in Salgotarjan. (AP Photo/MTI,Balazs Mohai) 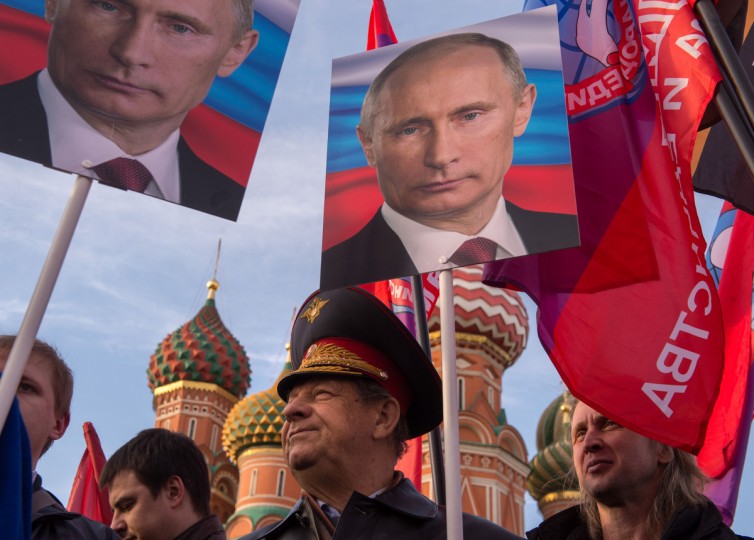 People hold placards depicting Russia’s President Vladimir Putin as they take part in a rally and a concert by the Kremlin Wall in central Moscow on March 18, 2015, to mark one year since Russia’s President Vladimir Putin signed off on the annexation of Crimea in a epochal shift that ruptured ties with Ukraine and the West. St. Basils Cathedral is seen in the background. (Alexander Utkin/Getty Images) 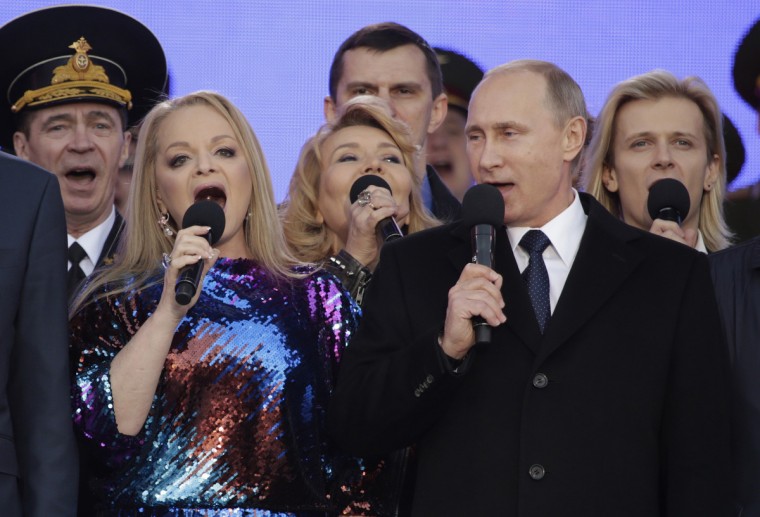 Russian President Vladimir Putin, center, sings the national anthem at a rally marking the one year anniversary of the annexation of Ukraine’s Crimea peninsula, in downtown Moscow, Russia, Wednesday, March 18, 2015. Speaking to tens of thousands of supporters just outside the Kremlin walls, Putin has described Russia’s annexation of Ukraine’s Crimean Peninsula as a move to protect ethnic Russians and regain the nation’s “historic roots.” At left is Russian singer Larisa Dolina. (AP Photo/Pavel Golovkin) 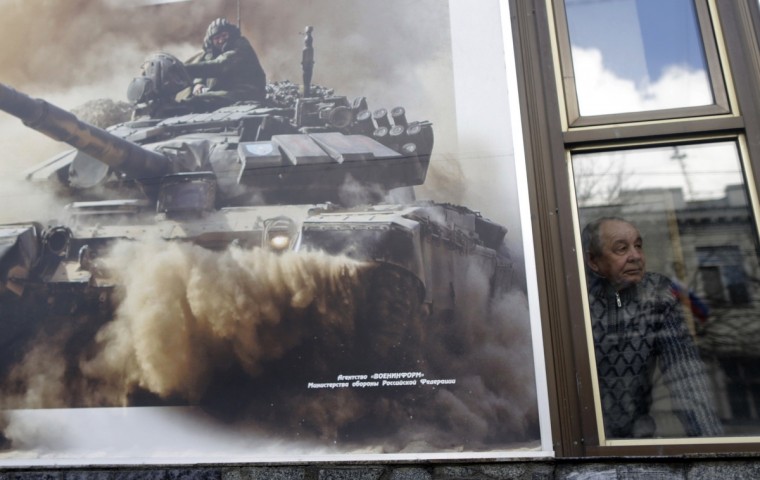 A man looks through a window of a building with a banner depicting a Russian tank on it during celebrations in Sevastopol on March 18, 2015, to mark one year since Russia’s President Vladimir Putin signed off on the annexation of Crimea in a epochal shift that ruptured ties with Ukraine and the West. (Max Vetrov/Getty Images) 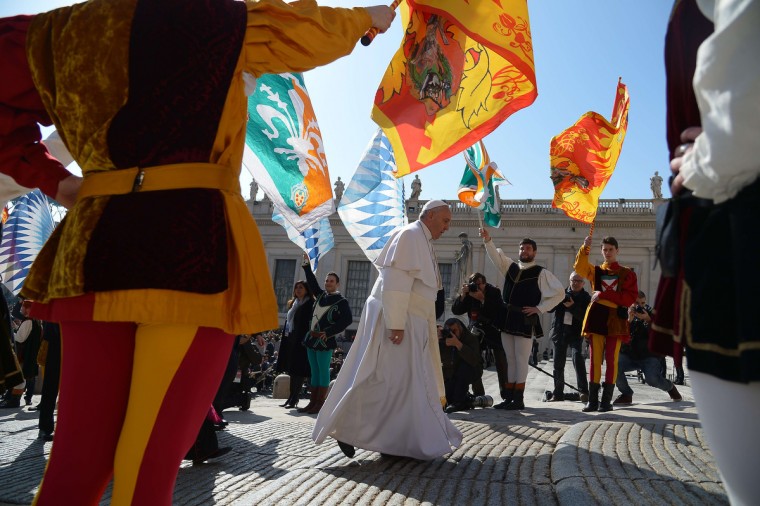 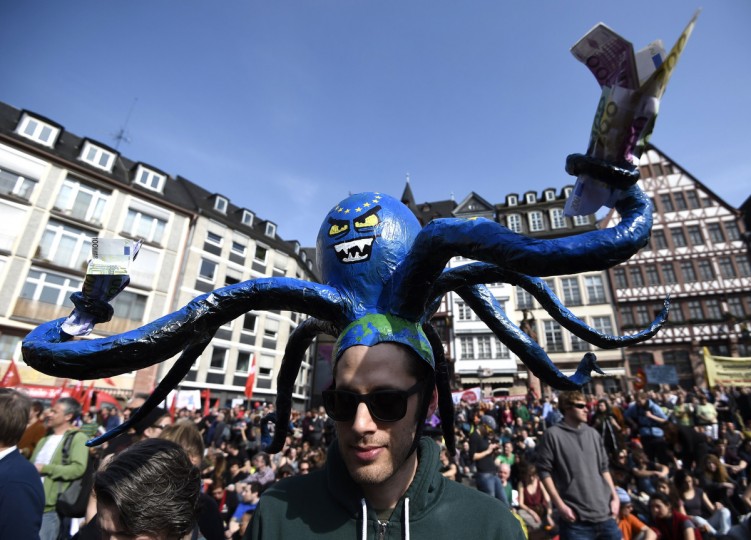 A protester wears a an octopus hat during a protest on the opening day of the European Central Bank (ECB) in Frankfurt am Main, western Germany, on March 18, 2015. Supporters of the so-called Blockupy alliance consisting of social movements, activists, workers, trade unions and parties are expected to stage large protests against austerity and the authority of the European Central Bank when the bank’s new headquarters officially will be inaugurated on March 18, 2015. (Odd Andersen/Getty Images) 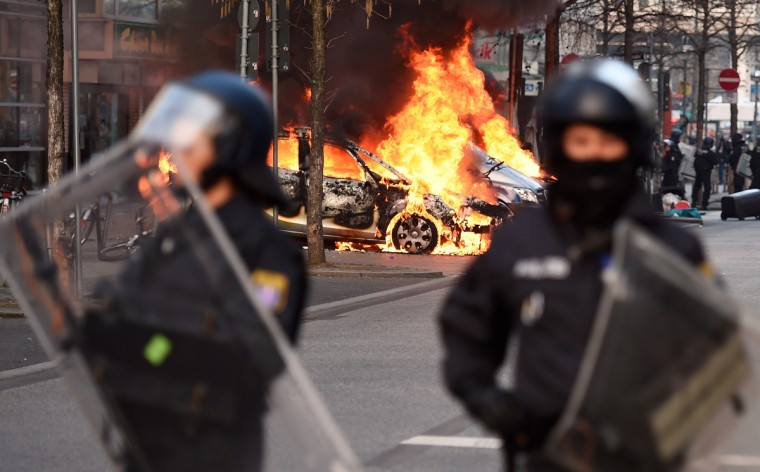 Riot Police form a cordon as a Police car burns on the opening day of the European Central Bank (ECB) in Frankfurt am Main, western Germany, on March 18, 2015. Supporters of the so-called Blockupy alliance consisting of social movements, activists, workers, trade unions and parties are expected to stage large protests against austerity and the authority of the European Central Bank when the bank’s new headquarters officially will be on March 18, 2015. (Odd Andersen/Getty Images) 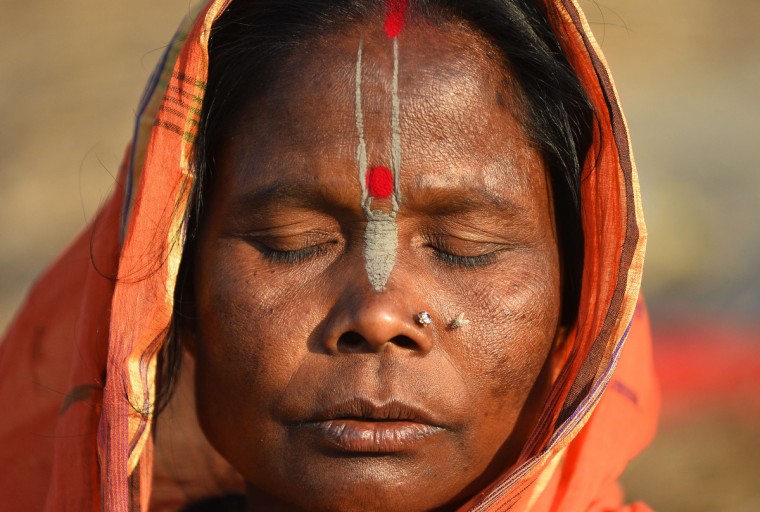 A fly sits on the cheek of an Indian Hindu devotee as she prays on the banks of the river Yamuna in New Delhi on March 18, 2015. (Chandan Khanna/Getty Images) 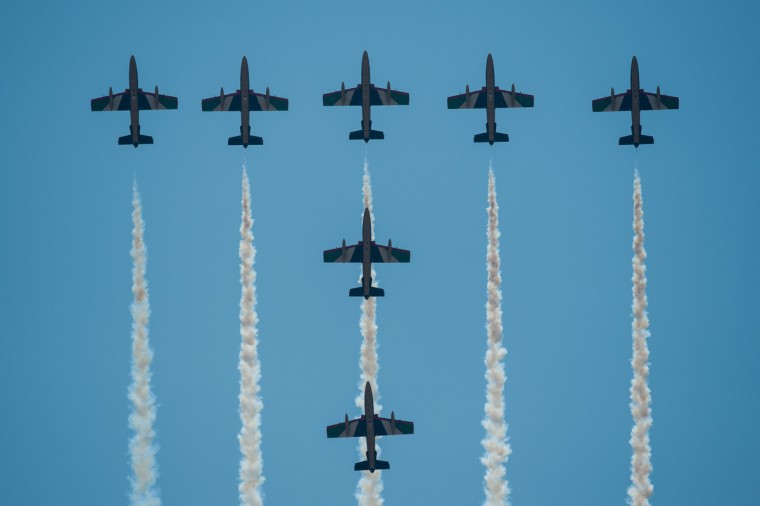 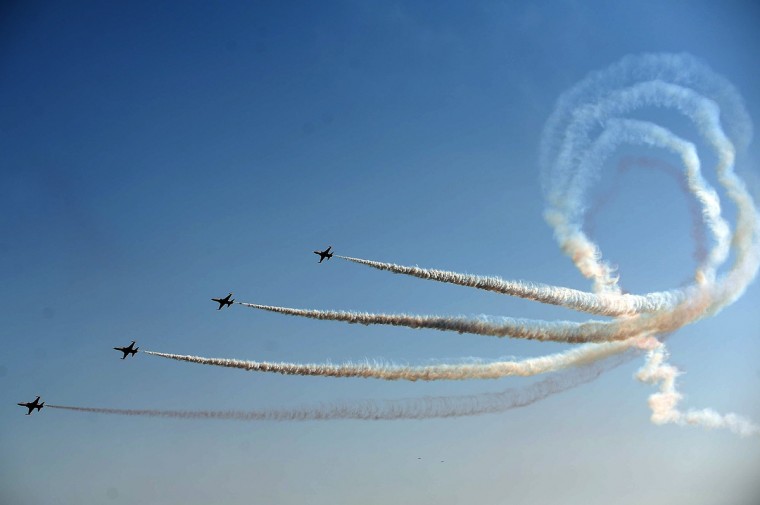 Turkish Stars aerobatic team fly their Northrop F-5 Freedom Fighters, on March 18, 2015 in the northwestern province of Canakkale, during a ceremony marking the 100th anniversary of Gallipoli Victory Day, the battle that marked a turnaround against the Allied Forces in favor of the Turks during World War I. (Ozan Kose/Getty Images) 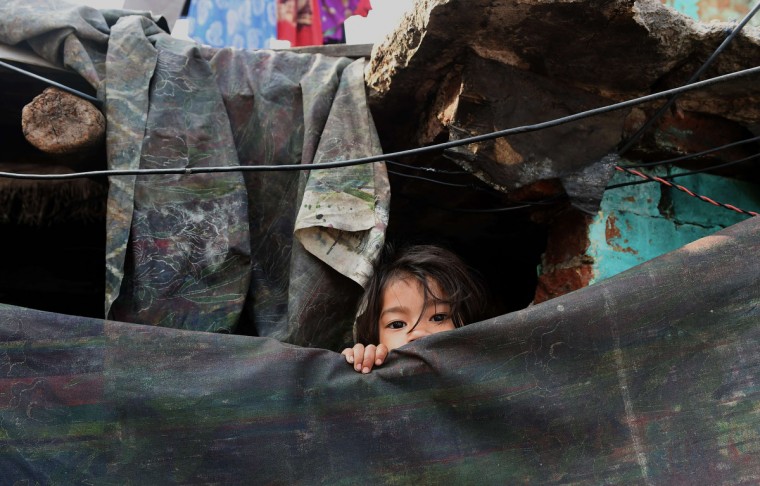 A young Indian girl peeps out from her shanty in a slum in New Delhi on March 18, 2015. (Money Sharma/Getty Images) 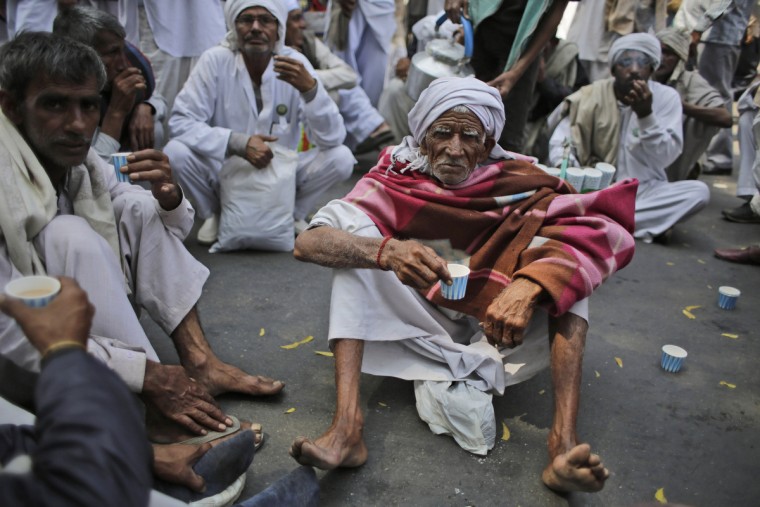 Indian farmers drink tea as they gather near the parliament for a protest against the ruling Bharatiya Janata Party’s Land Acquisition Bill in New Delhi, India, Wednesday, March 18, 2015. Opposition parties and farmers have marched in the capital and protested against the bill, calling it anti-farmer in a country where agriculture is the main livelihood for more than 60 percent of the 1.2 billion people. (AP Photo/Altaf Qadri) 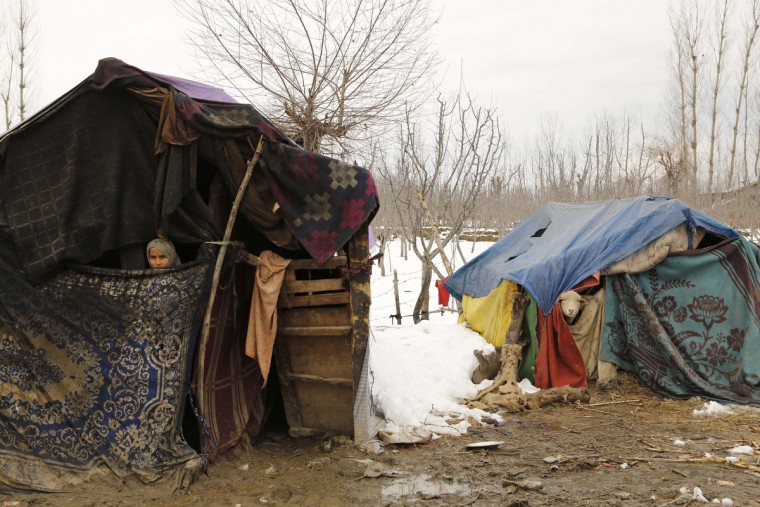 A young Kashmiri Bakarwal nomad girl looks out from inside her temporary camp, with a sheep in the adjoining tent at Haal village, some 52 Kilometers (33 miles) south of Srinagar, India, Wednesday, March 18, 2015. The Jammu-Srinagar highway, connecting the Kashmir valley to the rest of the country, remained closed for the fourth consecutive day Wednesday following heavy rain and snowfall at some places. (AP Photo/Mukhtar Khan) 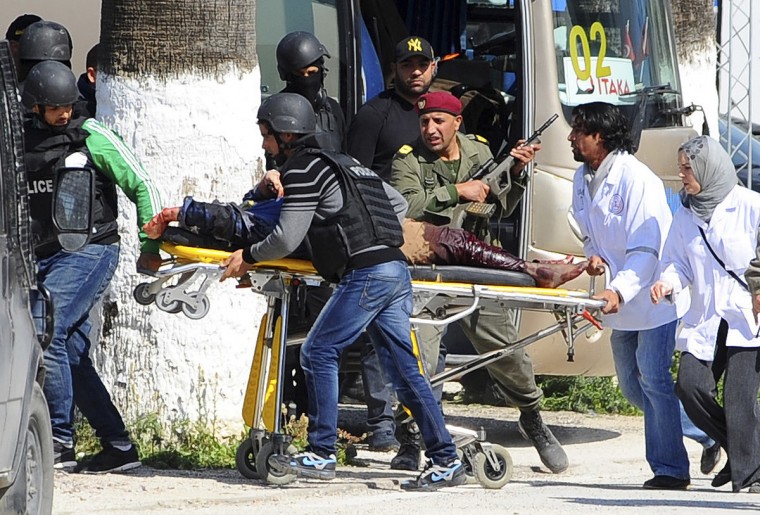 A victim is being evacuated by rescue workers outside the Bardo museum in Tunis, Wednesday, March 18, 2015 in Tunis, Tunisia. Gunmen opened fire at a leading museum in Tunisia’s capital, killing 19 people including 17 tourists, the Tunisian Prime Minister said. A later raid by security forces left two gunmen and one security officer dead but ended the standoff, Tunisian authorities said. (AP Photo/Hassene Dridi) 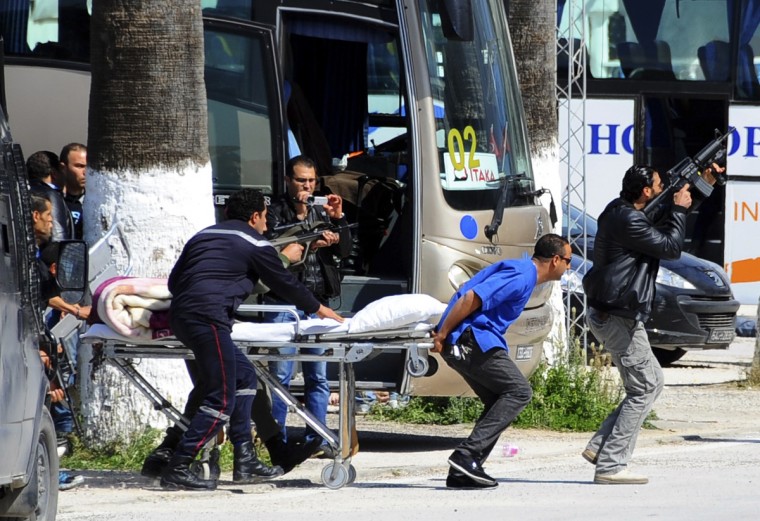 Escorted by security forces, rescue workers pull an empty stretcher outside the Bardo museum Wednesday, March 18, 2015 in Tunis, Tunisia. Authorities say scores of people are dead after an attack on a major museum in the Tunisian capital, and some of the gunmen may have escaped. (AP Photo/Salah Ben Mahmoud) 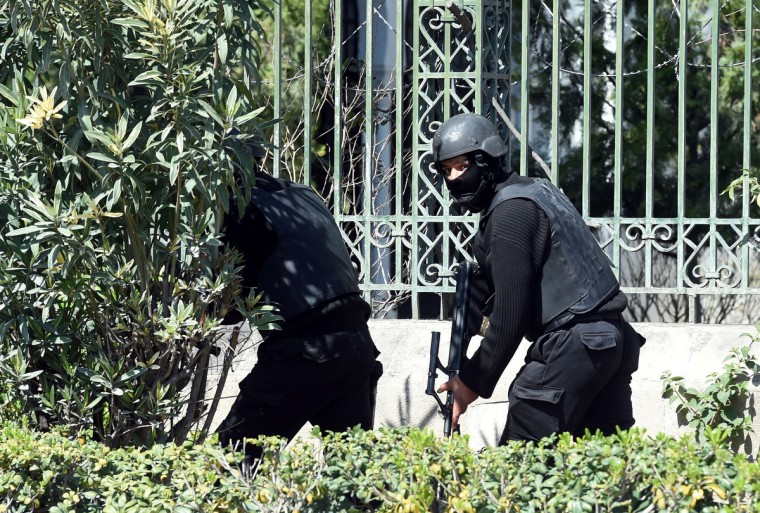 Tunisian security forces secure the area after gunmen attacked Tunis’ famed Bardo Museum on March 18, 2015. At least seven foreigners and a Tunisian were killed in an attack by two men armed with assault rifles on the museum, the interior ministry said. (Fethi Belaid/Getty Images)

« Northern lights over the Alaska Iditarod » From the Vault: 175th Anniversary of the Old Bay Line