A Grextension, rainy golf in Florida, bubbles in Brazil | Feb. 27 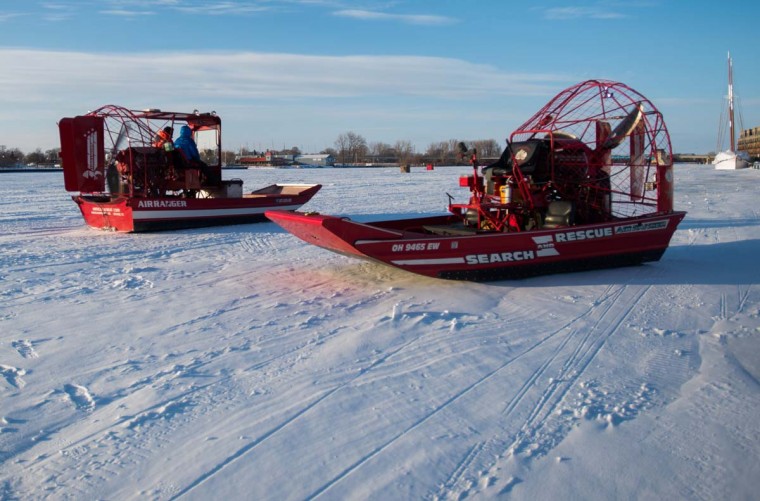 Stan Floyd, owner and president of American Airboat Corp. and Brian Edwards, ride airboats on the Saginaw River Thursday, Feb. 26, 2015 in Bay City, Mich. The demonstrations were part of the International Ice Rescue Training and Operations Meeting put on by the National Association of State Boating Law Administrators or NASBLA in conjunction with the Coast Guard. || CREDIT: THE BAY CITY TIMES, YFAT YOSSIFOR – AP PHOTO 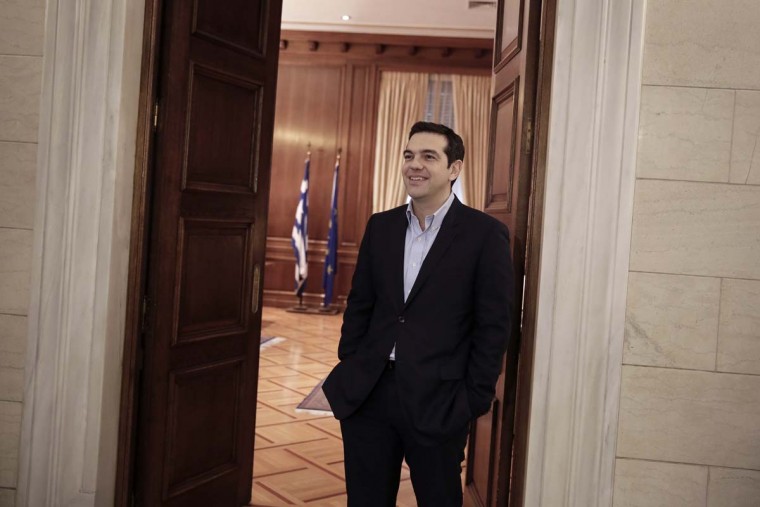 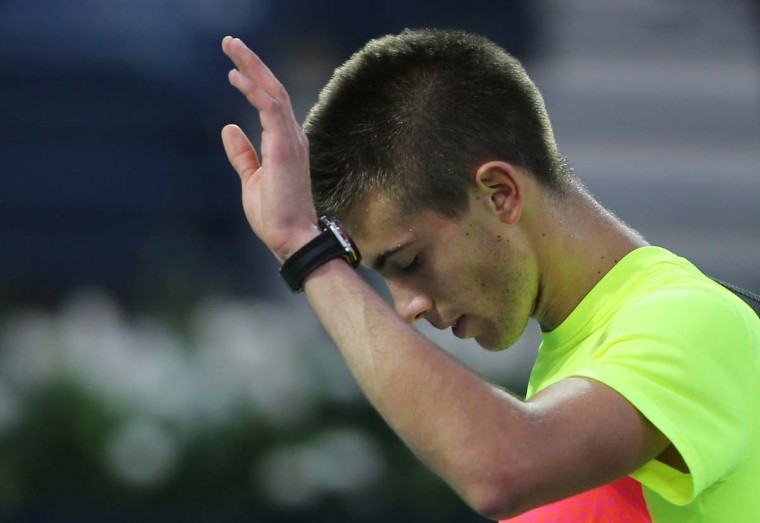 Borna Coric of Croatia leaves the court after he was defeated by Roger Federer of Switzerland during a semi final match of the Dubai Duty Free Tennis Championships in Dubai, United Arab Emirates, Friday, Feb. 27, 2015. || CREDIT: KAMRAN JEBREILI – AP PHOTO 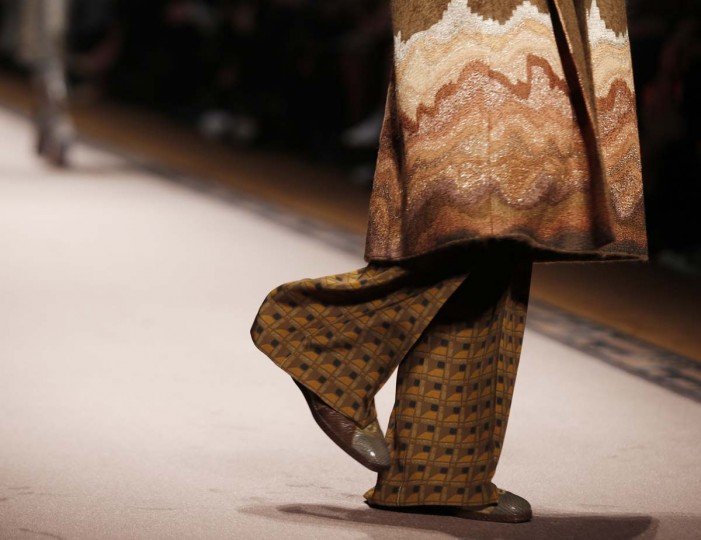 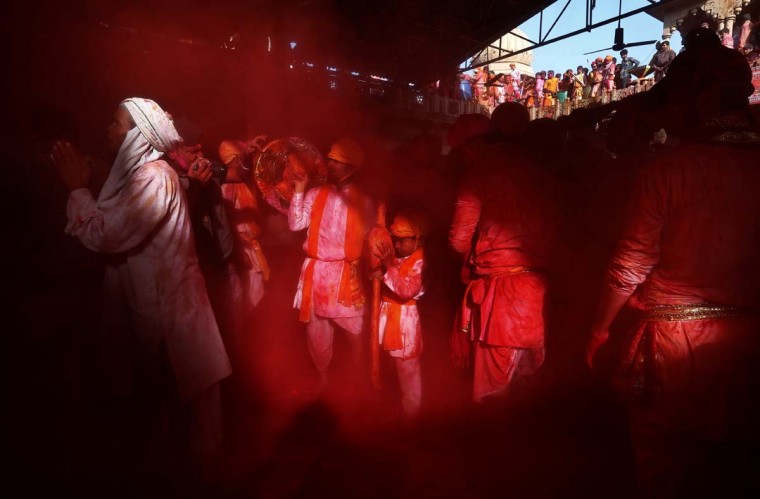 Hindu men from the village of Nandgaon pray at the Ladali or Radha temple before taking out a procession for the Lathmar Holi festival at the legendary hometown of Radha, consort of Hindu God Krishna, in Barsana, 115 kilometers (71 miles) from New Delhi, India, Friday, Feb. 27, 2015. During Lathmar Holi the women of Barsana beat the men from Nandgaon, the hometown of Krishna, with wooden sticks in response to their teasing. || CREDIT: SAURABH DAS – AP PHOTO 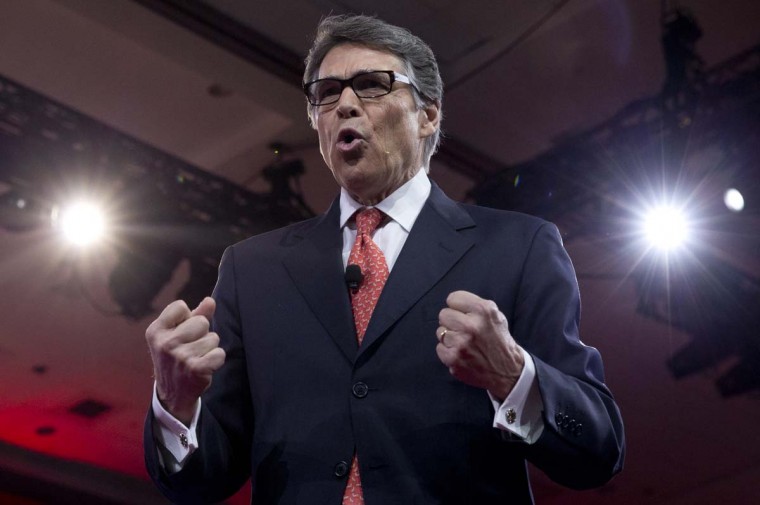 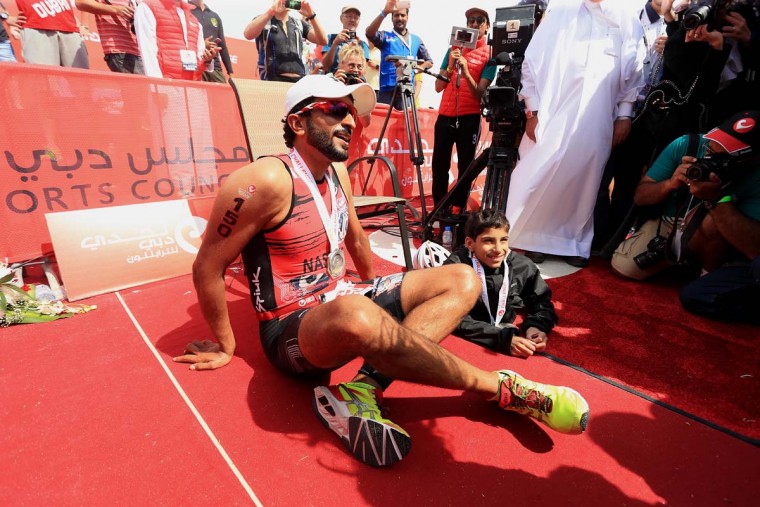 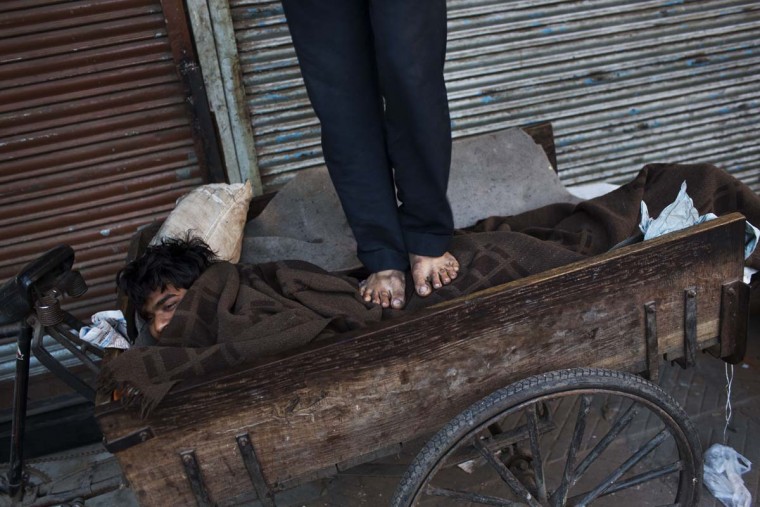 An Indian homeless man gets a massage from a friend early in the morning at the old city area of New Delhi, India, Friday, Feb. 27, 2015. Old Delhi despite being extremely crowded and dilapidated still serves as the symbolic heart of the city. || CREDIT: BERNAT ARMANGUE – AP PHOTO 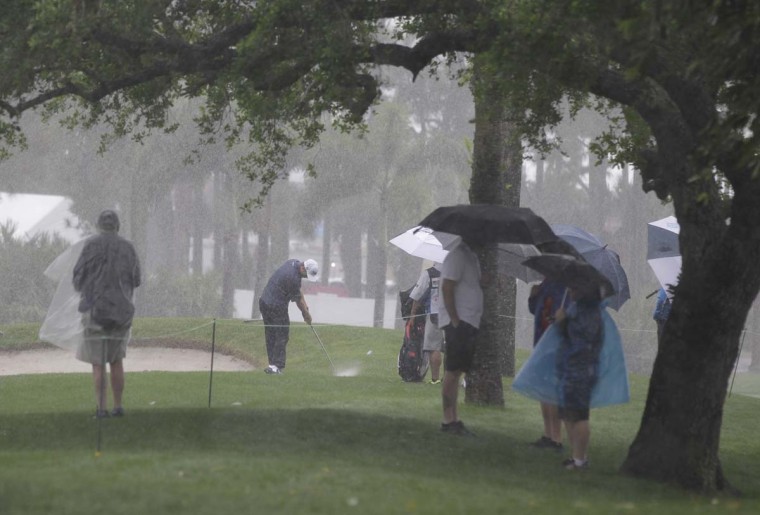 Justin Thomas, center, hits the ball on the 10th fairway as fans cover from the rain during the second round of the Honda Classic golf tournament, Friday, Feb. 27, 2015 in Palm Beach Gardens, Fla. || CREDIT: LUIS M. ALVAREZ – AP PHOTO 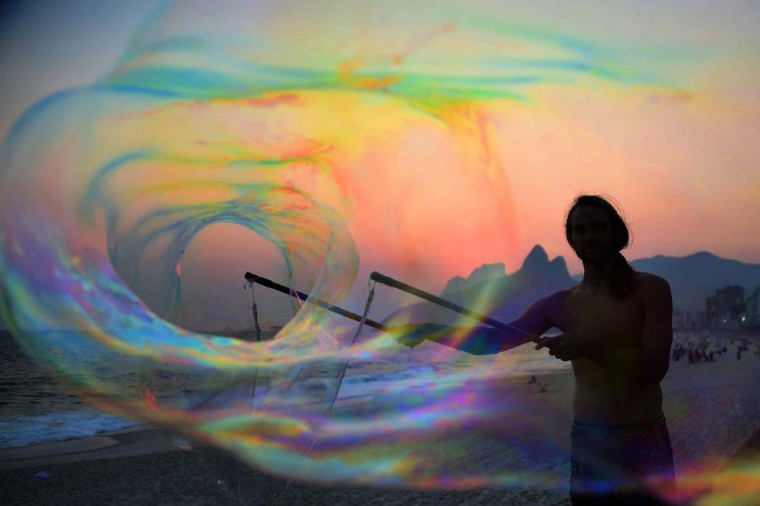 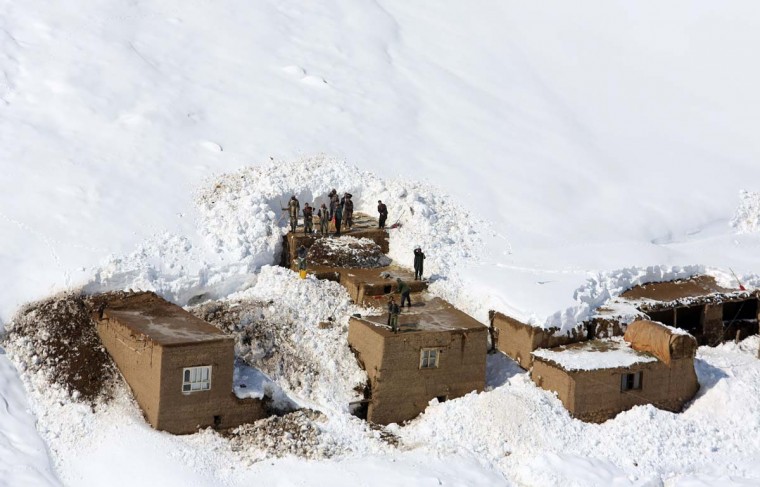 Afghans stand on the roof of a home damaged by an avalanche in the Paryan district of Panjshir province, north of Kabul, Afghanistan, Friday, Feb. 27, 2015. The death toll from severe weather that caused avalanches and flooding across much of Afghanistan has jumped to more than 200 people, and the number is expected to climb with cold weather and difficult conditions hampering rescue efforts, relief workers and U.N. officials said Friday. || CREDIT: RAHMAT GUL – AP PHOTO 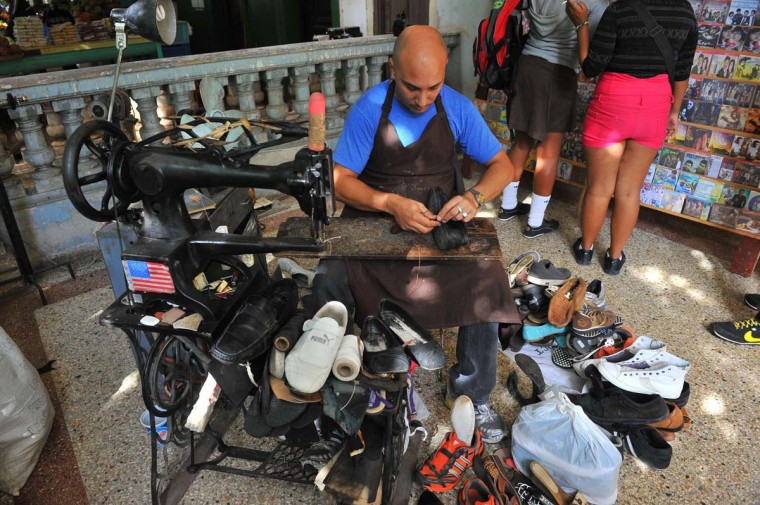 A private cobbler works in a street of Havana, on February 27, 2015. After half a century lacking basic goods, many Cubans have become experts at fixing devices and cars long past their prime. || CREDIT: YAMIL LAGE – AFP/GETTY IMAGES 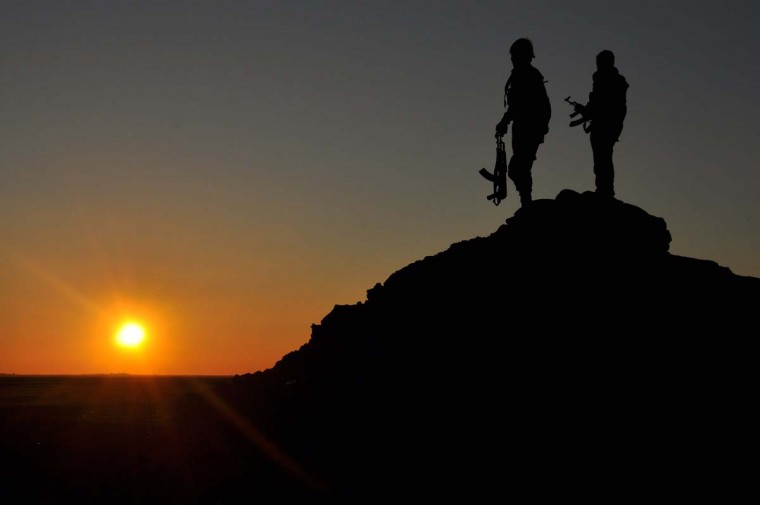 People’s Protection Units (YPG) fighters stand on top of a hill at sunset on February 26, 2015, after they retook parts of the town of Tal Hamis, southeast of the city of Qameshli, after six days of clashes with Islamic State (IS) group jihadists in Syria’s Hasakeh province. Tal Hamis has been under IS control for more than a year and according to the Syrian Observatory of Human Rights the town was “one of the most important strongholds” of the group in the region. || CREDIT: DELIL SOULEIMAN – AFP/GETTY IMAGES 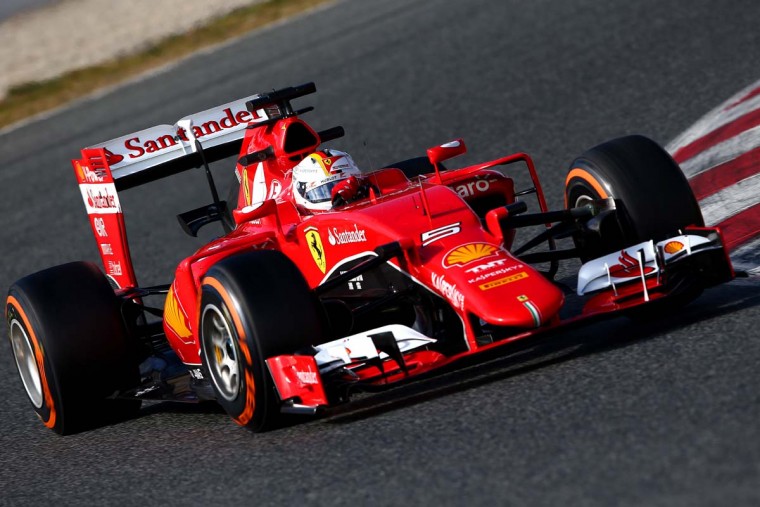 Sebastian Vettel of Germany and Ferrari drives during day two of the final Formula One Winter Testing at Circuit de Catalunya on February 27, 2015 in Montmelo, Spain. (Photo by Mark Thompson/Getty Images) 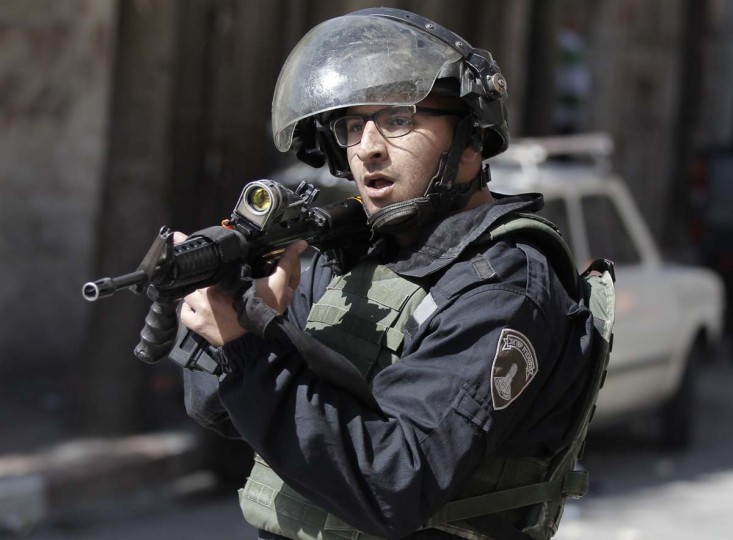 An Israeli soldier aims his gun towards Palestinian demonstrators during a protest demanding the reopening of Shuhada Street in the West Bank city of Hebron on February 27, 2015. || CREDIT: AHMAD GHARABLI – AFP/GETTY IMAGES 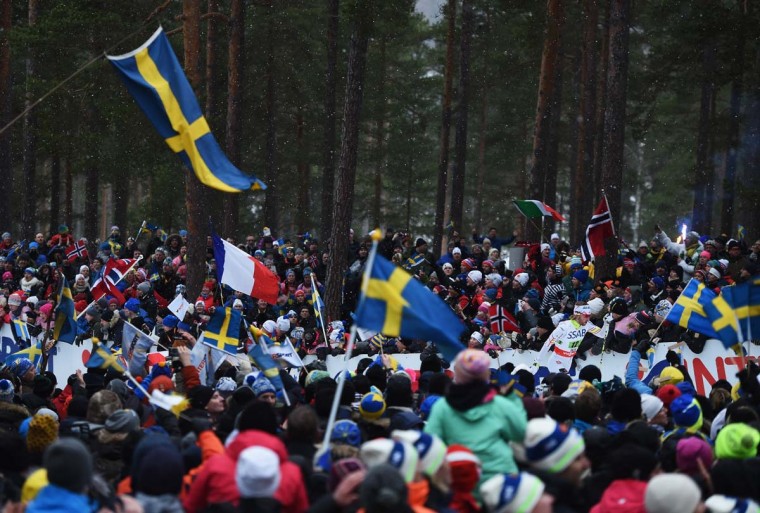 Graeme Killick of Canada is encouraged by fans during the Men’s 4 x 10km Cross-Country Relay during the FIS Nordic World Ski Championships at the Lugnet venue on February 27, 2015 in Falun, Sweden. (Photo by Matthias Hangst/Getty Images) 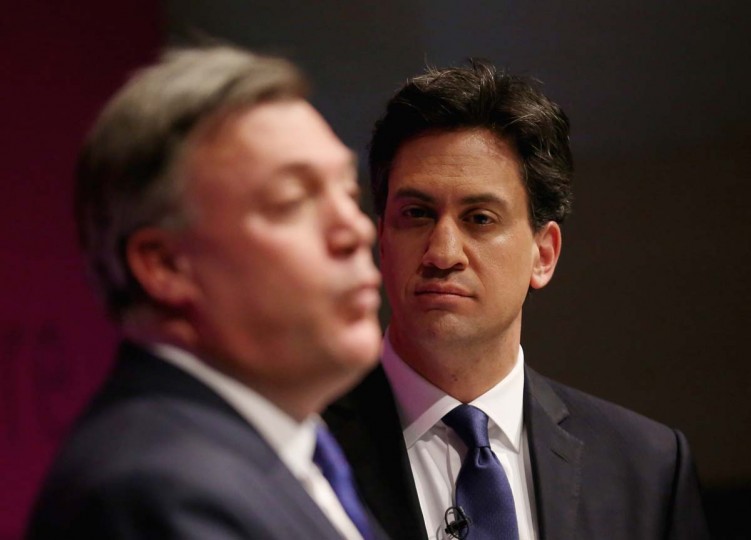 Labour leader Ed Miliband (R) listens to Shadow Chancellor Ed Balls address students at The Leeds College of Music where they pledged a reduction in university tuition fees if elected to power on February 27, 2015 in Leeds, England. As part of Labour’s election campaign, party leader Ed Miliband said he would cut university tuition fees in England to 6000 GBP beginning in autumn 2016. (Photo by Christopher Furlong/Getty Images) 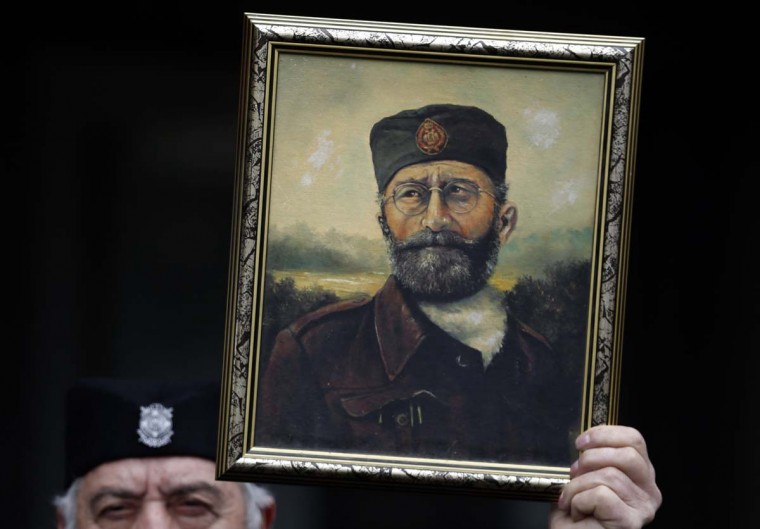 A protester holds a picture of the former ultra-nationalist Serb World War II leader Dragoljub Draza Mihailovic during protest in front of the Higher Court in Belgrade, Serbia, Friday, Feb. 27, 2015. A Belgrade court is considering quashing the treason conviction against Gen. Draza Mihailovic for his collaboration with Nazis during World War II, which would politically rehabilitate the controversial Serbian guerrilla commander almost 70 years after he was sentenced and shot to death by communists. || CREDIT: DARKO VOJINOVIC – AP PHOTO 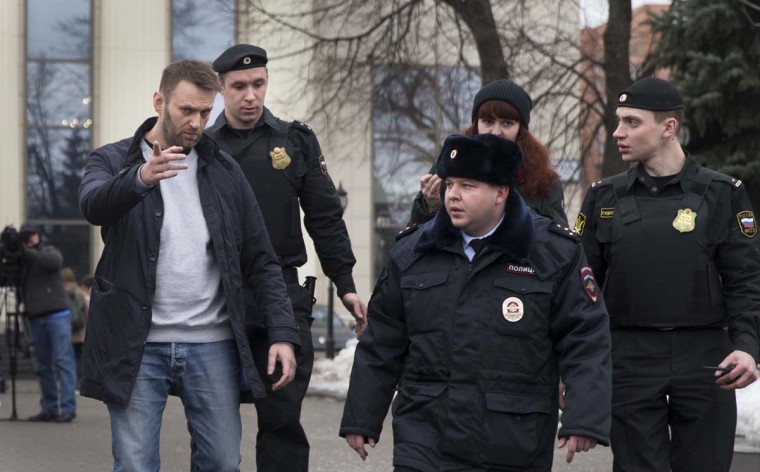 Russian opposition activist Alexei Navalny, left, surrounded by policemen leaves a court room in Moscow, Russia, Friday, Feb. 27, 2015. Navalny was detained earlier this month for 15 days for distributing leaflets for an anti-government march, which he will miss if he remains in prison. || CREDIT: PAVEL GOLOVKIN – AP PHOTO