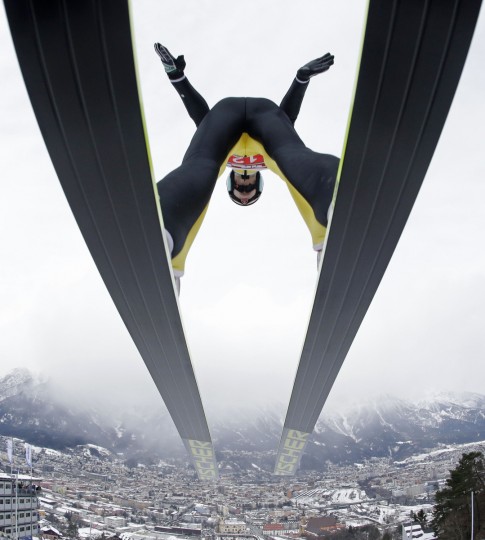 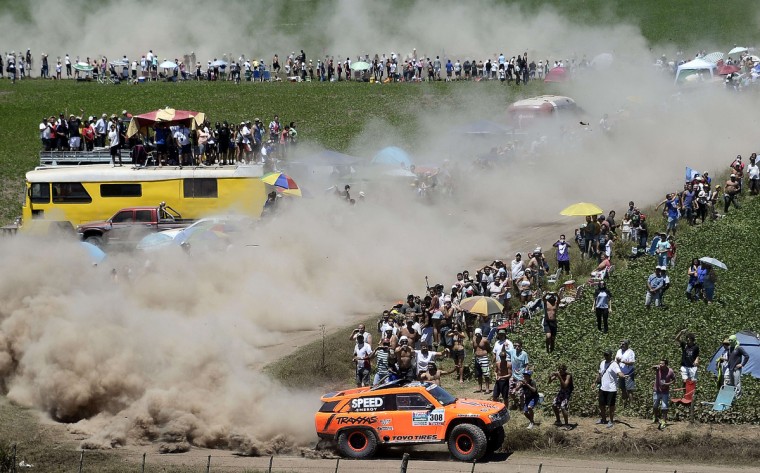 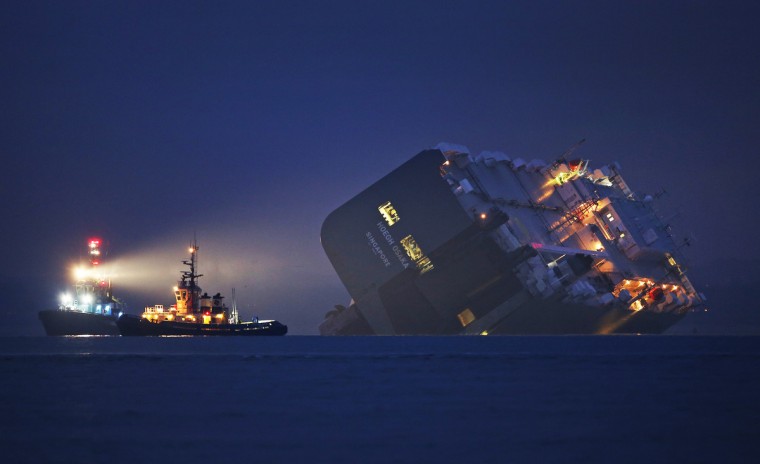 A salvage tug lights the hull of the stricken Hoegh Osaka cargo ship after it ran aground on a sand bank in the Solent on January 4, 2015 in Cowes, England. The cargo ship ran aground on Bramble Bank after leaving Southampton bound for Germany. All 25 crew members were rescued overnight. (Photo by Peter Macdiarmid/Getty Images) 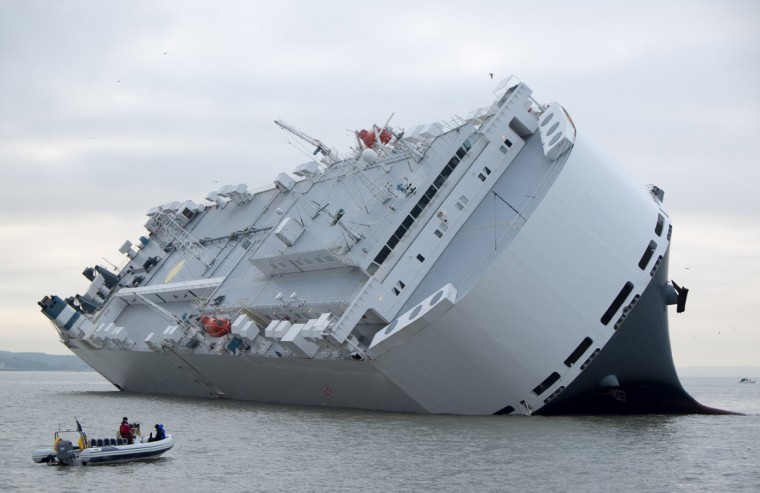 A small boat sails past the Hoegh Osaka car transporter cargo ship that ran aground in the Solent, off the Isle of Wight Sunday Jan. 4, 2015. The crew members of the Hoegh Osaka were taken to safety by a coastguard helicopter and lifeboats after it became stranded on Bramble Bank, in the Solent between Southampton and the Isle of Wight. (AP Photo/ Francis Bigg Photography) 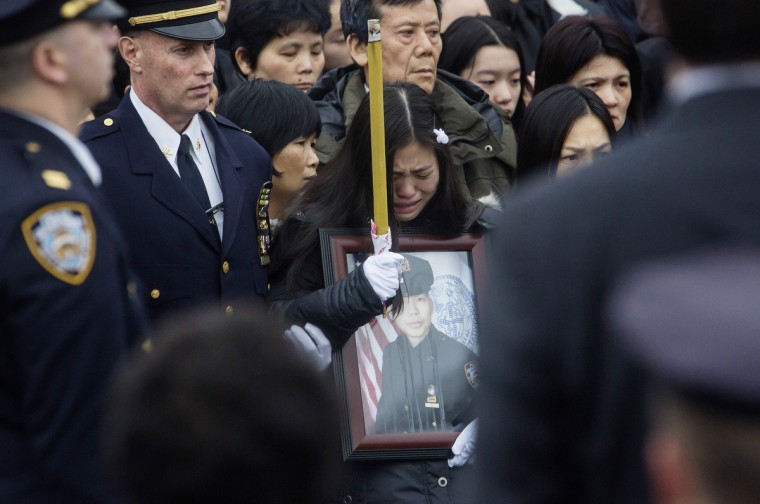 Pei Xia Chen, the widow of Police Officer Wenjian Liu, cries while holding his picture following a funeral service at Aievoli Funeral Home in the Dyker Heights neighborhood on January 4, 2015 in the Brooklyn borough of New York City. Liu was killed with his partner Rafael Ramos on December 20, when the two were shot by Ismaaiyl Brinsley while sitting in their patrol car. (Eric Thayer/Getty Images) 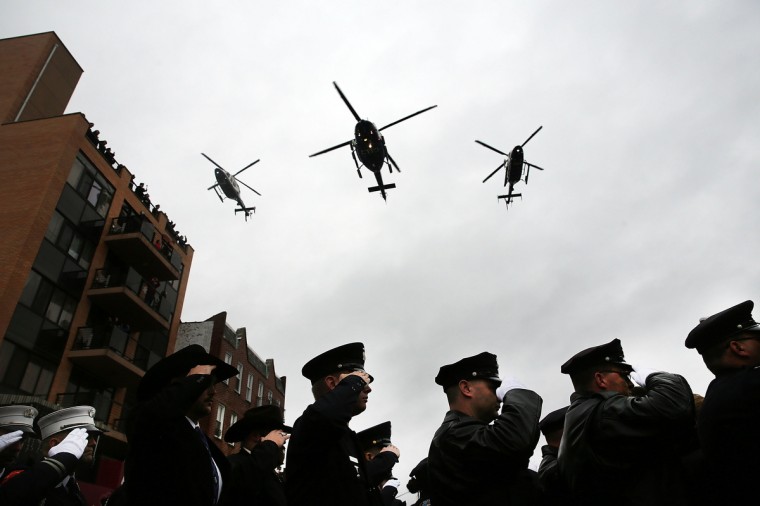 Police helicopters do a fly over at the conclusion of the funeral service for slain New York City Police Officer Wenjian Liu January 4, 2015 in New York City. Officers Wenjian Liu and Rafael Ramos were killed in an ambush while sitting in their patrol car last month on December 20. Thousands of fellow officers, family, friends and current FBI director is James Comey are expected at the Brooklyn funeral home for the service. Officer Ramos, was buried last week in Queens. (Photo by Spencer Platt/Getty Images) 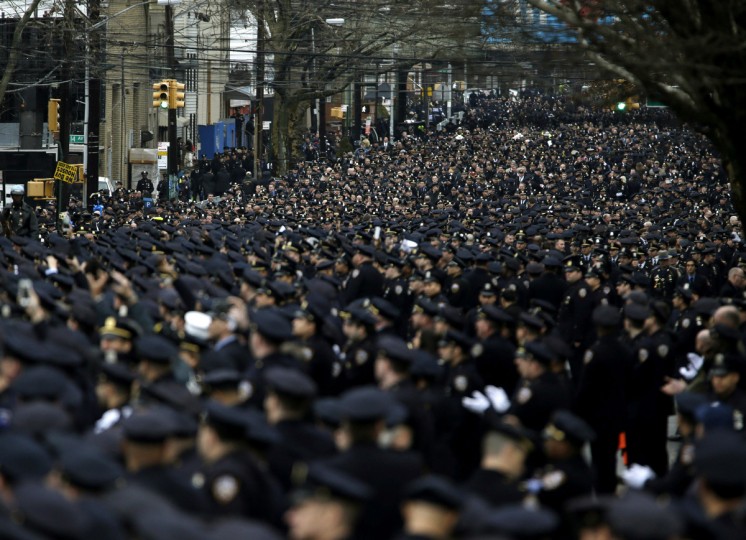 Police officers line the streets near the funeral of Officer Wenjian Liu in the Brooklyn borough of New York, Sunday, Jan. 4, 2015. Liu and his partner, officer Rafael Ramos, were killed Dec. 20 as they sat in their patrol car on a Brooklyn street. The shooter, Ismaaiyl Brinsley, later killed himself. (AP Photo/Seth Wenig) 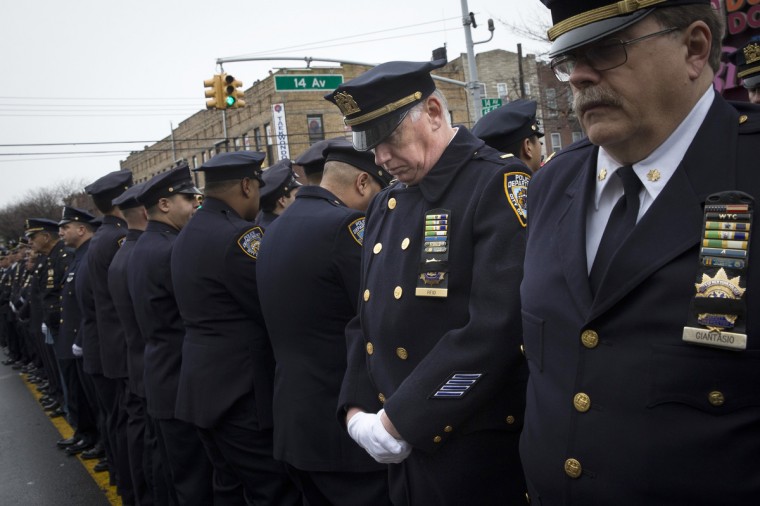 Some police officers turn their backs as Mayor Bill de Blasio speaks during the funeral of New York Police Department Officer Wenjian Liu at Aievoli Funeral Home, Sunday, Jan. 4, 2015, in the Brooklyn borough of New York. Liu and his partner, officer Rafael Ramos, were killed Dec. 20 as they sat in their patrol car on a Brooklyn street. The shooter, Ismaaiyl Brinsley, later killed himself. (AP Photo/John Minchillo) 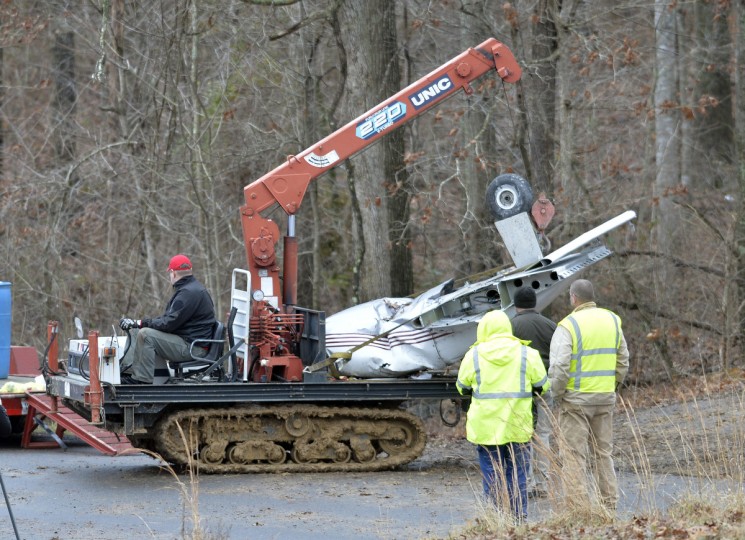 Salvage workers bring out part of a Piper PA-34’s fuselage, wing, and landing gear from a crash site Sunday, Jan. 4, 2015 in Kuttawa, Ky. Officials from the National Transportation Safety Board arrived at the crash site Sunday in Kentucky in which a 7-year-old girl survived and four of her family members were killed. Authorities said the child, dressed in a short-sleeve shirt, shorts and one sock, walked about a mile (more than a kilometer) in near-freezing temperatures through thick briar patches and woods before finding a home where she sought help. The plane went down in a deeply wooded area and required special machinery to remove. (AP Photo/Timothy D. Easley) 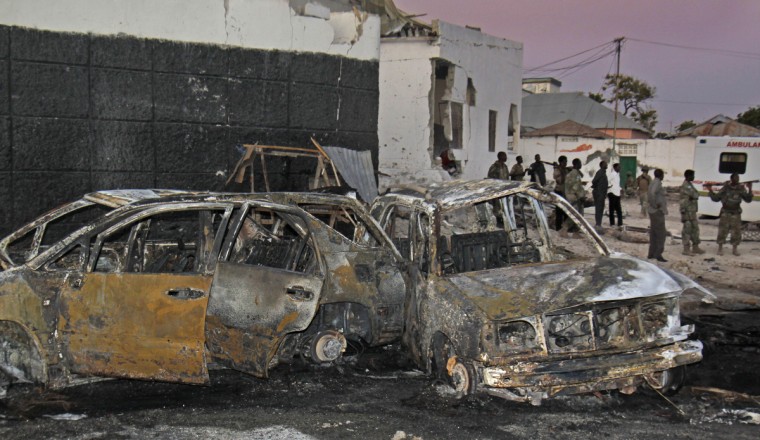 Somali soldiers stand near the wreckage at the scene of a car bomb attack that targeted a moving convoy of Somalia’s U.S.-trained elite forces, at dusk in Mogadishu, Somalia, Sunday, Jan. 4, 2015. The suicide car bomber blew himself up near the convoy of elite “Alpha Group” troops on the airport road in Mogadishu, killing at least four people, a Somali police officer said Sunday. (AP Photo/Farah Abdi Warsameh) 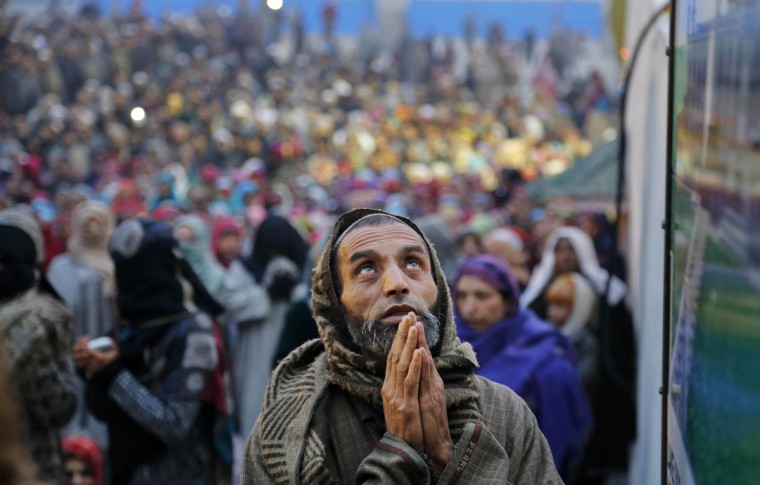 A Kashmiri devotee prays as a head priest displays a holy relic of Islams Prophet Muhammed at the Hazratbal shrine on Eid-e-Milad, the birth anniversary of the Prophet, in Srinagar, India, Sunday, Jan. 4, 2015. Thousands of Kashmiri Muslims gathered at the Hazratbal shrine which houses a relic believed to be a hair from the beard of the prophet. (AP Photo/Mukhtar Khan) 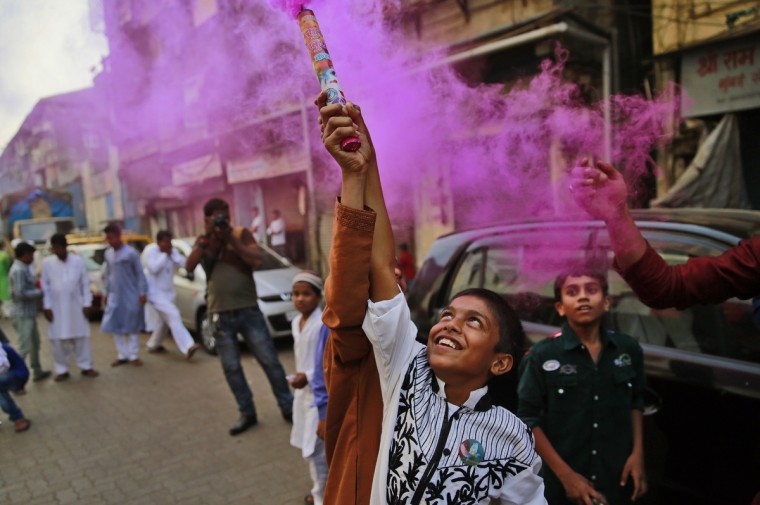 Indian Muslim boys release color during a procession of devotees in Mumbai, India, Sunday, Jan. 4, 2015. Many people gathered along the streets to chant religious slogans during the annual Eid-e-Milad festival marking the anniversary of Prophet Muhammad’s birth. (AP Photo/Rafiq Maqbool) 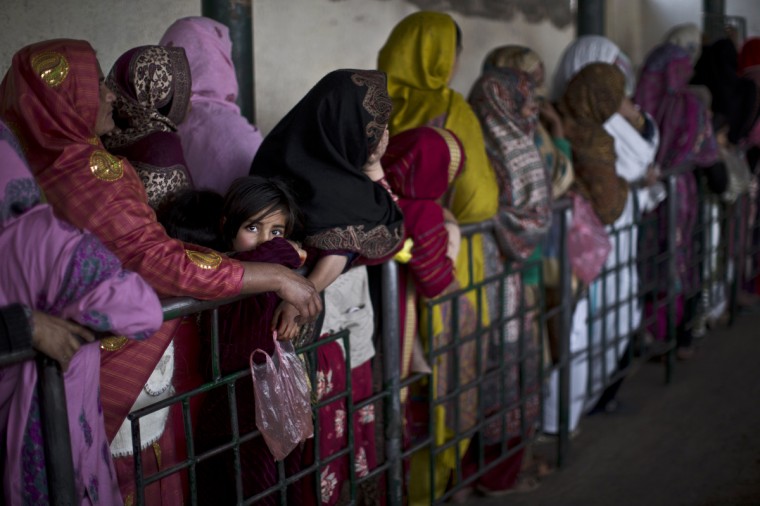 Pakistani women and children wait their turn to receive rice during a donated food distribution on the occasion of Prophet Muhammad’s birthday at a shrine in Islamabad, Pakistan, Sunday, Jan. 4, 2015. Food donations usually increase on Prophet Muhammad’s birthday, the 12th Rabi-ul-Awal month on the Islamic calendar, with traditional festivities and religious fervor. (AP Photo/Muhammed Muheisen) 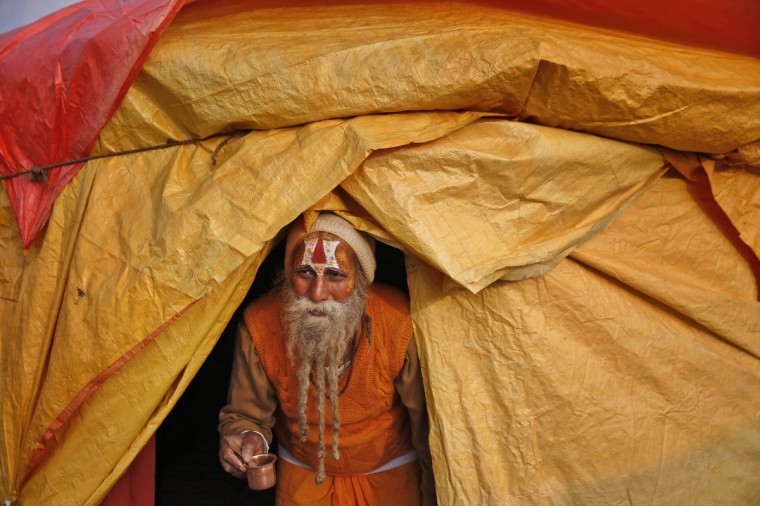 An Indian Hindu Holy man carries a glass as he walks out of his tent to perform a ritual ahead of the annual month long Hindu religious fair Magh Mela, in Allahabad, India, Sunday, Jan. 4, 2015. Hundreds of thousands of devout Hindus camp and take a bath at the confluence during the astronomically auspicious period of over 45 days that begins on Jan. 5, hoping to rid themselves of their sins and attain prosperity. (AP Photo/Rajesh Kumar Singh) 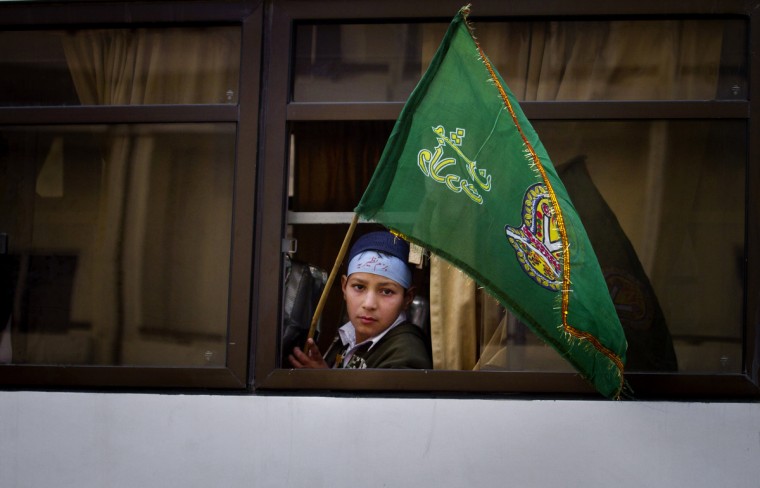 A Pakistani boy looks out the window of a bus during rally marking the birthday of Islam’s Prophet Muhammad in Islamabad, Pakistan, Sunday, Jan. 4, 2015. Thousands of Pakistani Muslims celebrated by participating in religious ceremonies and distributing free meals among the poor. (AP Photo/Anjum Naveed) 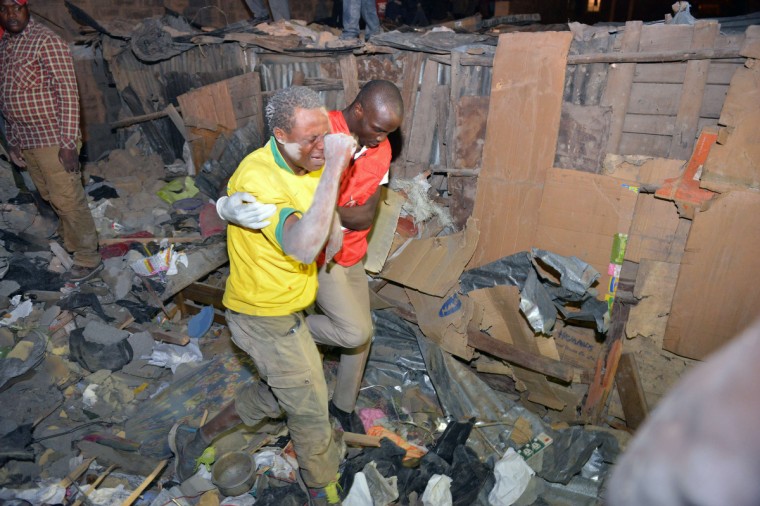 A volunteer rescuer reacts after trying to locate his wife in the rubble of a collapsed multi-story residential building, on January 04, 2014 in densely populated Huruma estate area of Kenyan capital, Nairobi. A high-rise building collapsed on January 4 leaving at least a dozen injured and an unknown number of others trapped under rubble. (Tony Karumba/Getty Images) 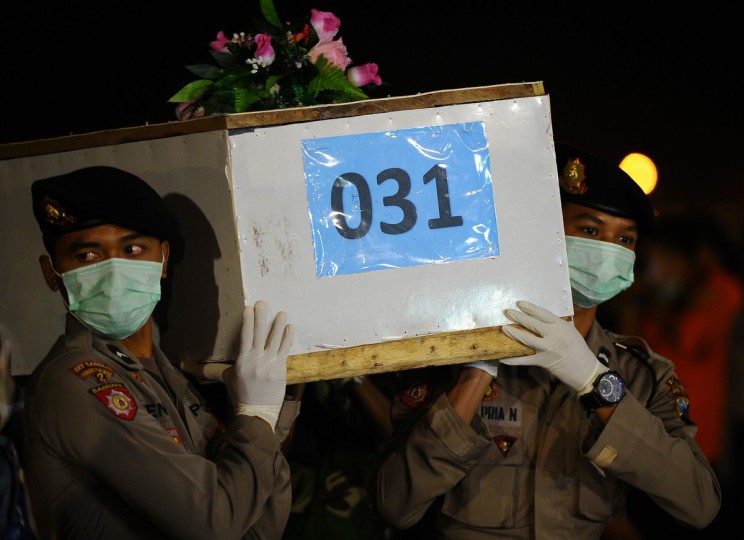 Indonesian soldiers carry a coffin containing a victim of the AirAsia flight QZ8501 crash to Bhayangkara Police Hospital for identification on January 4, 2015 in Surabaya, Indonesia. A massive recovery operation is underway in waters off Borneo to recover bodies and debris from the missing AirAsia plane. AirAsia announced that flight QZ8501 from Surabaya to Singapore, with 162 people on board, lost contact with air traffic control at 07:24 a.m. local time on December 28. (Photo by Robertus Pudyanto/Getty Images) 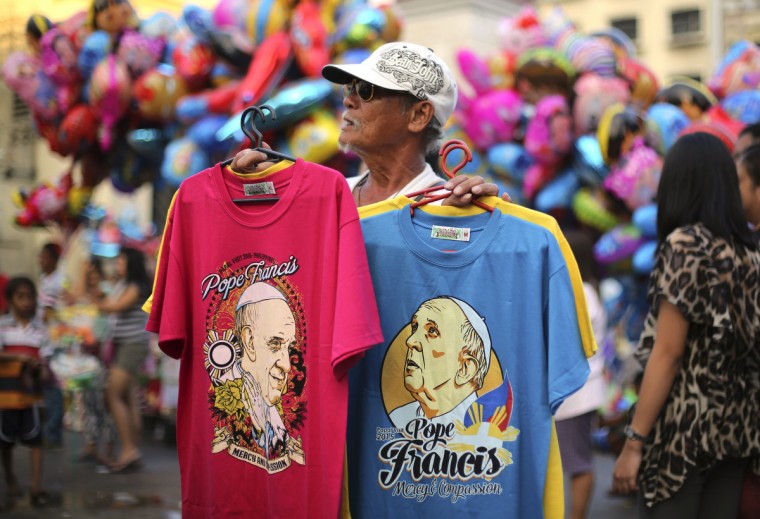 A Filipino man sells shirts with images of Pope Francis for 150 pesos each ($3) outside a church in downtown Manila, Philippines,. Pope Francis will visit this predominantly Catholic country on Jan. 15-19. (AP Photo/Aaron Favila) 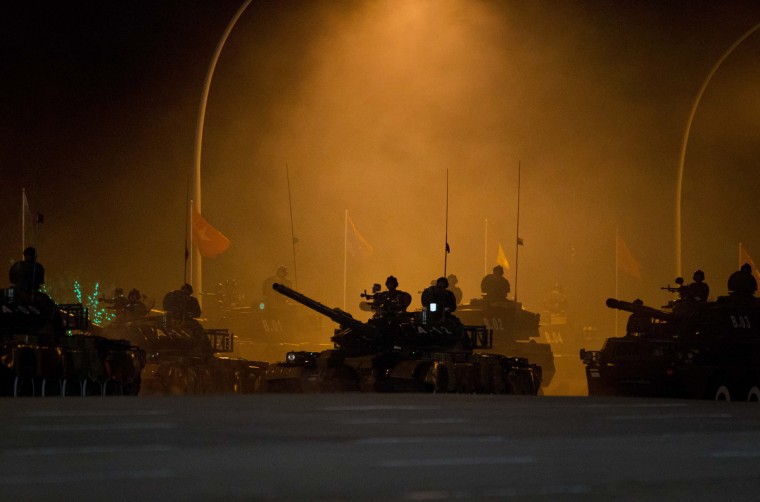 Armed-cars and tanks participate in a parade during a ceremony to mark Myanmar’s 67th anniversary of Independence Day in Naypyitaw, Myanmar, Sunday, Jan. 4, 2015. (AP Photo/Gemunu Amarasinghe) 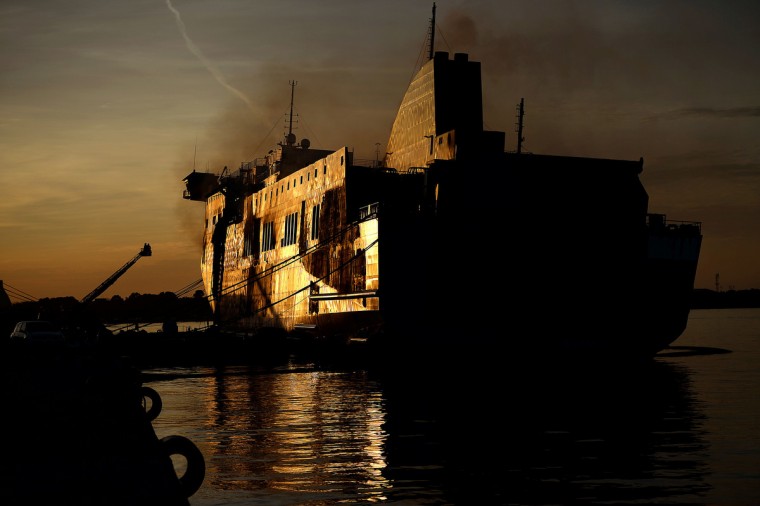 Italian firemen check the Italian-owned Norman Atlantic ferry moored at the pier of Brindisi . Bari prosecutor Giuseppe Volpe ordered the Italian-owned vessel to be towed to Brindisi so that it can be searched for corpses and for clues as to what caused the huge fire that erupted on board on December 28. The fire led to the deaths of at least 13 people and there are fears the final toll could be higher amid uncertainty over how many people were actually on board. (Filippo Monteforte/Getty Images)