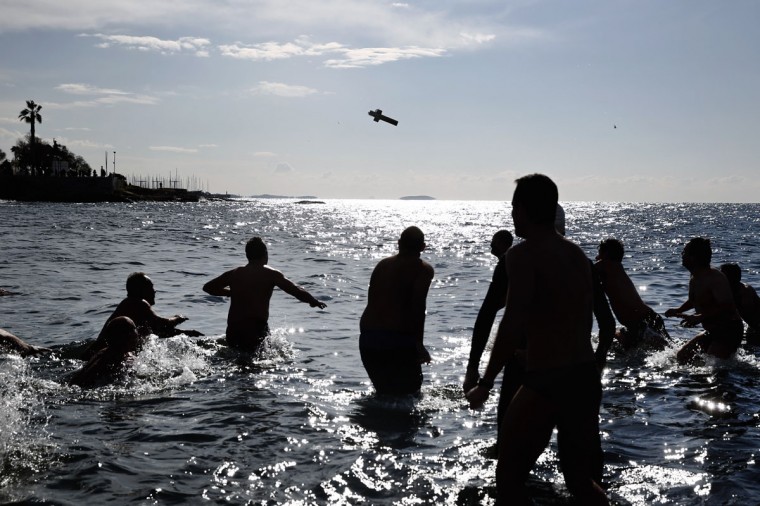 A wooden cross is seen in the air as swimmers try to retrieve it during a ceremony to bless the water in Greece’s Flisvos beach, at Paleo Faliro near Athens on Monday, Jan. 6, 2015. Similar ceremonies to mark Epiphany were held across Greece on river banks, seafronts and lakes. An Orthodox priest throws a cross into the water and swimmers race to be the first to retrieve it. (AP Photo/Petros Giannakouris) 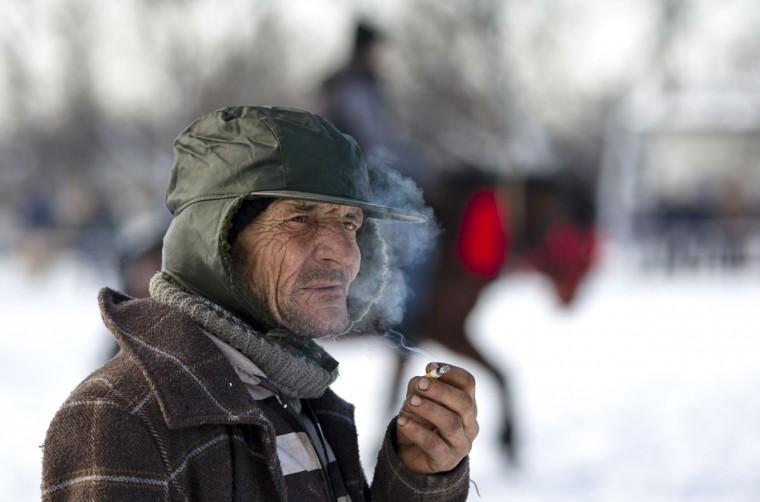 A man smokes waiting for the start of a traditional Epiphany celebration horse race in Pietrosani, Romania, Tuesday, Jan. 6, 2015. According to the local Epiphany traditions, following the religious service, villagers get their horses blessed with the Holy water then compete in a race. (AP Photo/Vadim Ghirda) 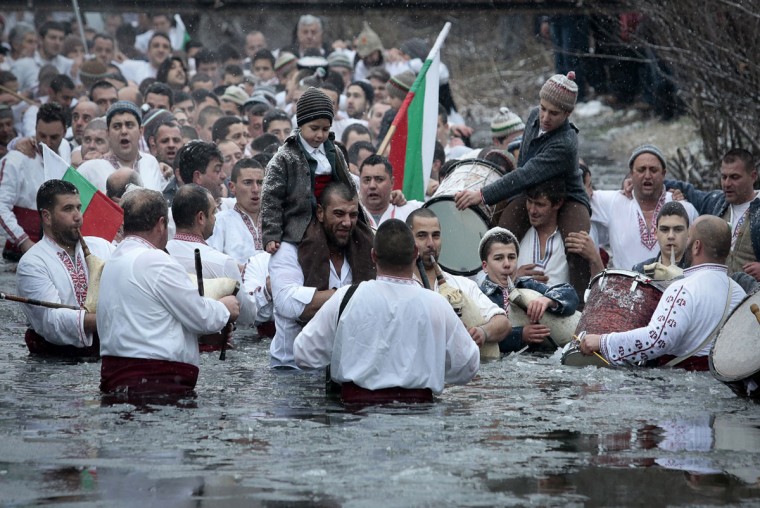 Believers sing and dance in the icy water of the river Tundzha as they celebrate Epiphany day, a Christian festival, in the town of Kalofer, Bulgaria, Tuesday, Jan. 6, 2015. Traditionally, an Eastern Orthodox priest throws a cross in the river and it is believed that the one who retrieves it will be healthy through the year. In the central Bulgarian town of Kalofer, hundreds of Christians marked Epiphany by donning national costumes and wading into the frigid waters of the Tundzha river. (AP Photo/Valentina Petrova) 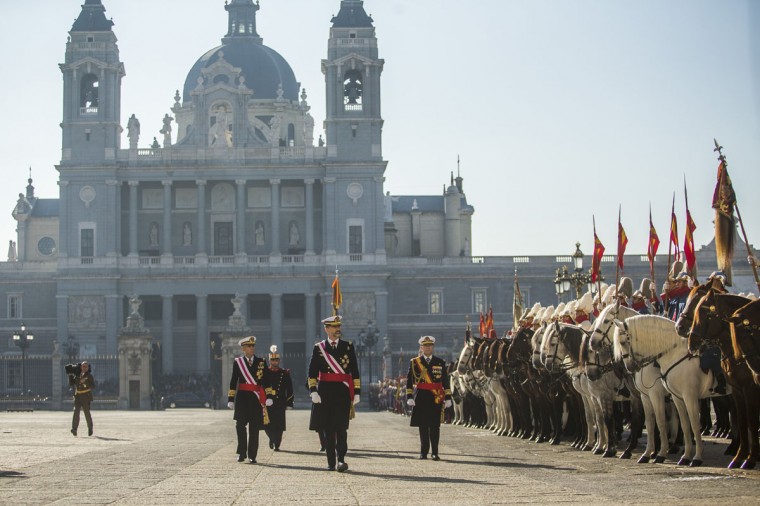 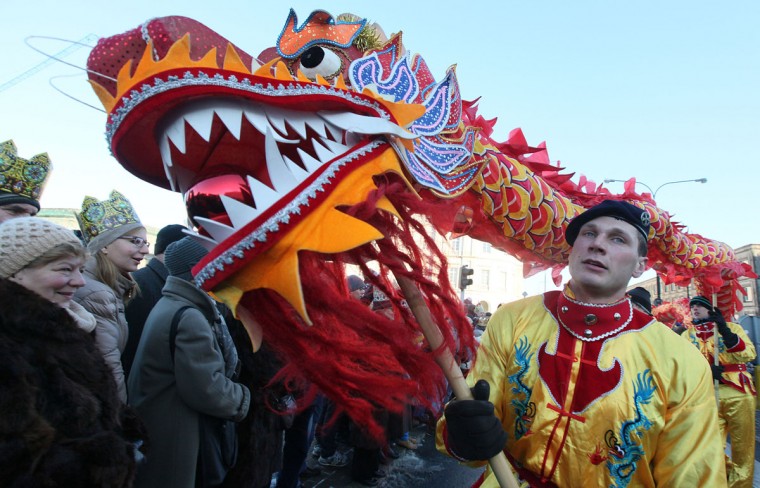 A dragon is carried during the traditional Roman Catholic Epiphany procession in the streets of Warsaw, Poland, Tuesday, Jan. 6, 2015. (AP Photo/Czarek Sokolowski) 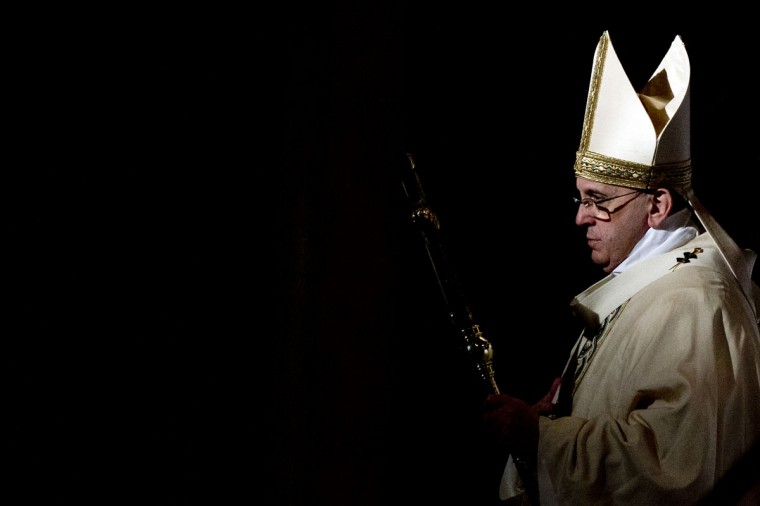 Pope Francis leaves after celebrating a Mass in St. Peter’s Basilica, at the Vatican, to mark Epiphany, Tuesday, Jan. 6, 2015. The Epiphany day is a joyous day for Catholics in which they recall the journey of the Three Kings, or Magi, to pay homage to Baby Jesus. (AP Photo/Andrew Medichini) 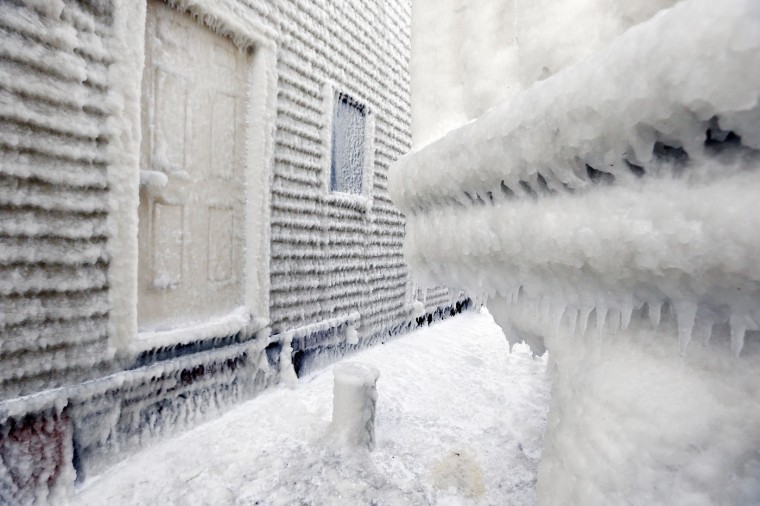 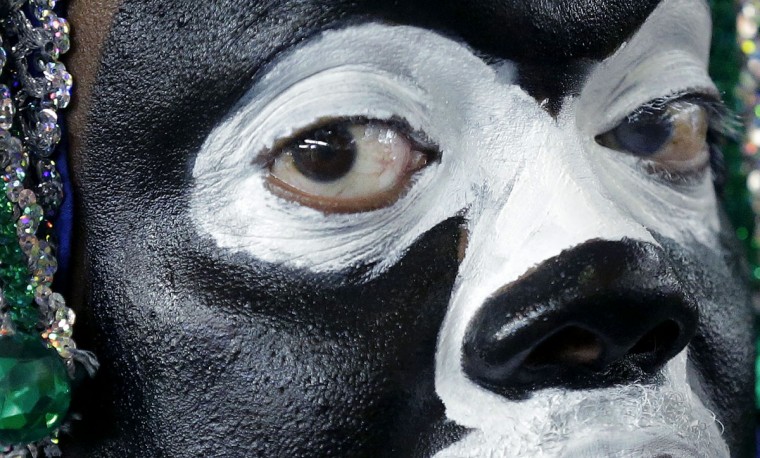 Jermain Perry, a member of ‘The Tramps,’ the oldest unit of the Zulu Social Aid and Pleasure Club, a historic New Orleans Mardi Gras krewe, participates in King’s Day festivities in New Orleans, Tuesday, Jan. 6, 2015. King’s Day is a tradition marking the 12th night after Christmas and the official start of the Mardi season. Carnival is celebrated along the Gulf Coast with parties, balls and parades culminating on Mardi Gras, or Fat Tuesday, a final day of celebration before Lent. It is a major tourist draw in New Orleans. Mardi Gras falls on Feb. 17 this year. (AP Photo/Gerald Herbert) 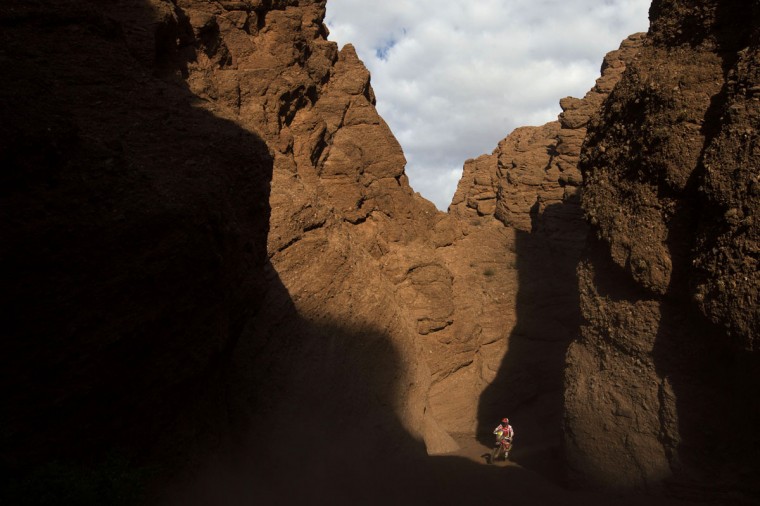 Toyota driver Giniel de Villiers of South Africa and co-pilot Dirk Von Zitzewitz of Germany, race during the third stage of the Dakar Rally 2015 between the cities of San Juan and Chilecito, Argentina, Tuesday, Jan. 6, 2015. The race will finish on Jan. 17, passing through Bolivia and Chile and returning to Argentina. (AP Photo/Felipe Dana) 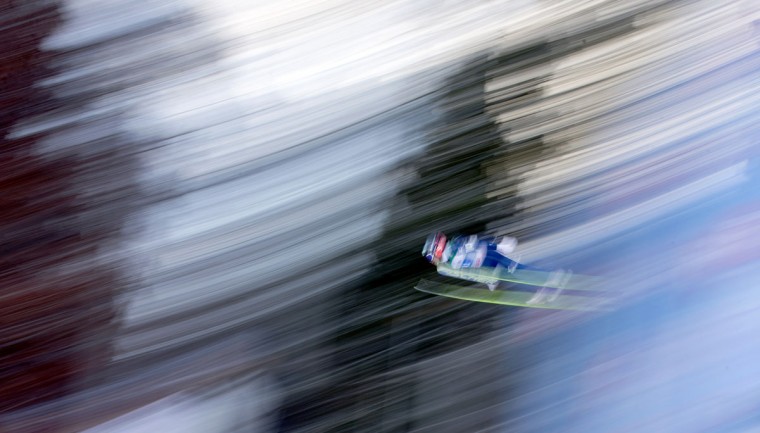 In this picture taken with a longtime exposure Japan’s Reruhi Shimizu soars during the trial jump of the fourth stage of the four hills ski jumping tournament in Bischofshofen, Austria, on Tuesday, Jan. 6, 2015. (AP Photo/Matthias Schrader) 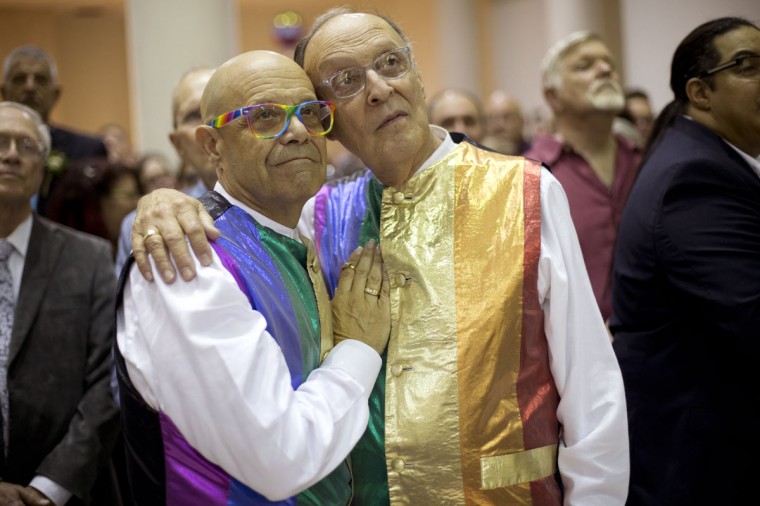 John and Shel Goldstein hug during the group wedding Tuesday, Jan. 6, 2015 in Delray Beach, Fla. About 100 couples were married in the ceremony. Florida’s ban on same-sex marriage ended statewide at the stroke of midnight Monday, Jan. 5, and court clerks in some Florida counties wasted no time, issuing marriage licenses overnight to same-sex couples. But they still were beaten to the punch by a Miami judge who found no need to wait until the statewide ban expired. (AP Photo/J Pat Carter) 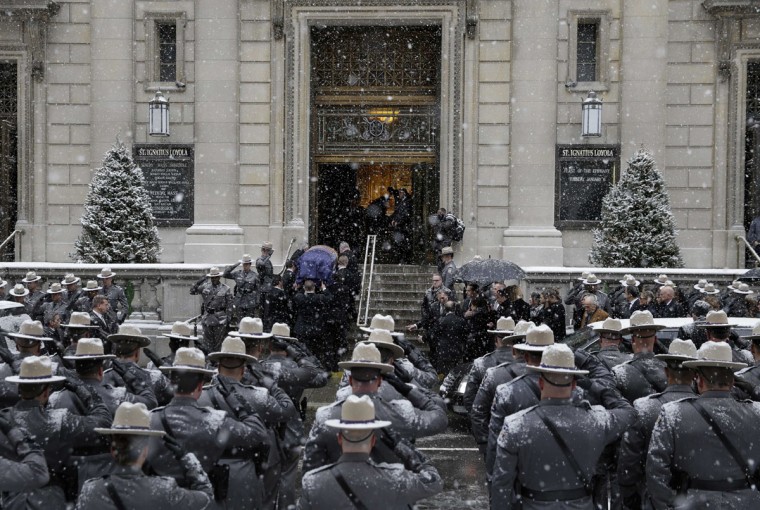 A casket containing the body of Mario Cuomo is carried into Church of St. Ignatius Loyola for his funeral in New York, Tuesday, Jan. 6, 2015. Cuomo, 82, died in his Manhattan home on Jan. 1, hours after his son Gov. Andrew Cuomo was inaugurated for a second term. (AP Photo/Seth Wenig) 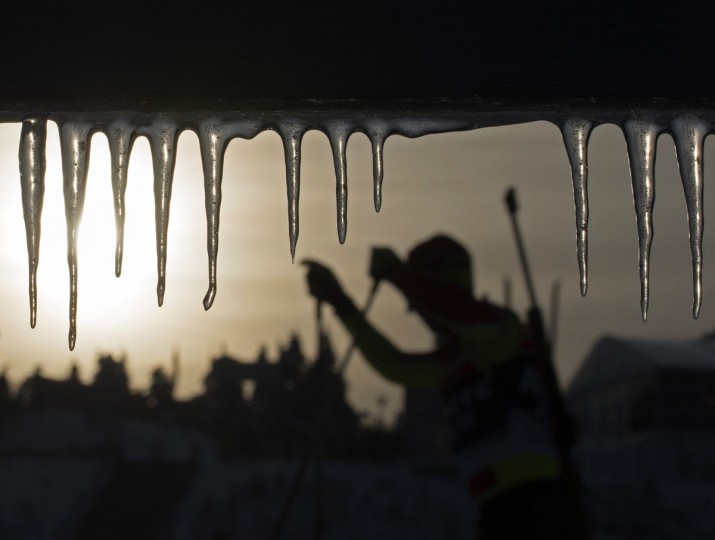 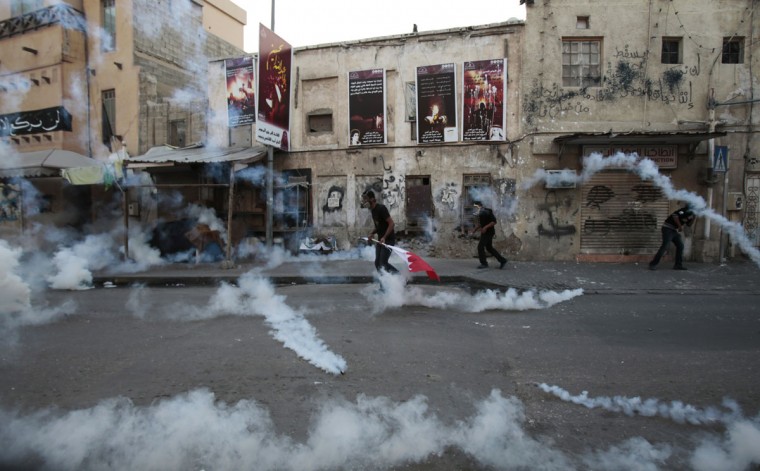 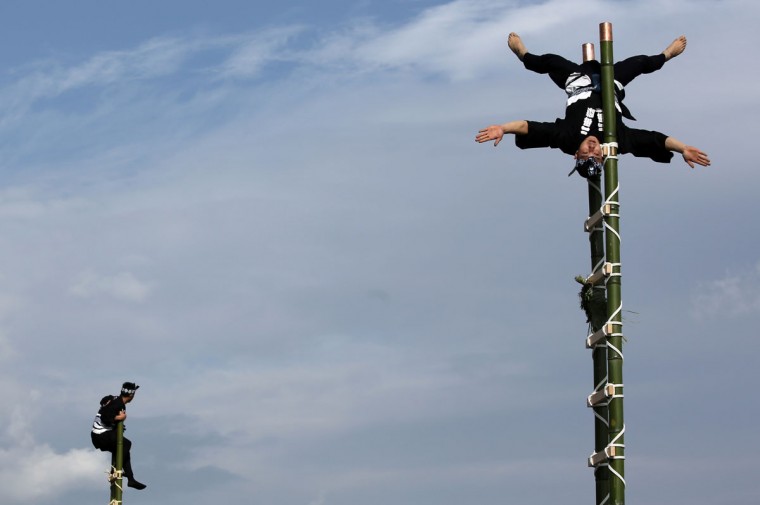 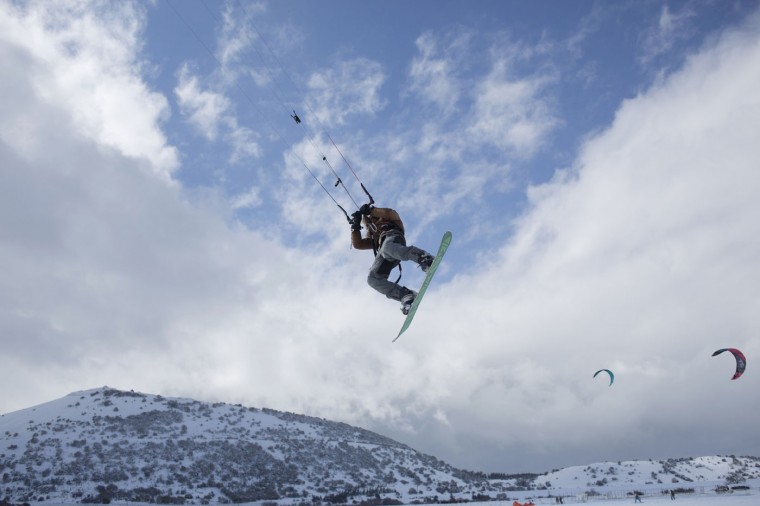 Kids play on man-made sand hill to block high waves ahead of the upcoming storm in Tel Aviv’s beach front, Israel, Tuesday, Jan. 6, 2015. Wind gusts up to 38 Knots and waves up to 9 meters, or 29 feet, hit along the coastline of Israel on Tuesday. Wintry weather is striking across the Middle East, bringing cold weather to Syrian refugees in Lebanon and a blanketing sandstorm in Cairo. (AP Photo/Oded Balilty) 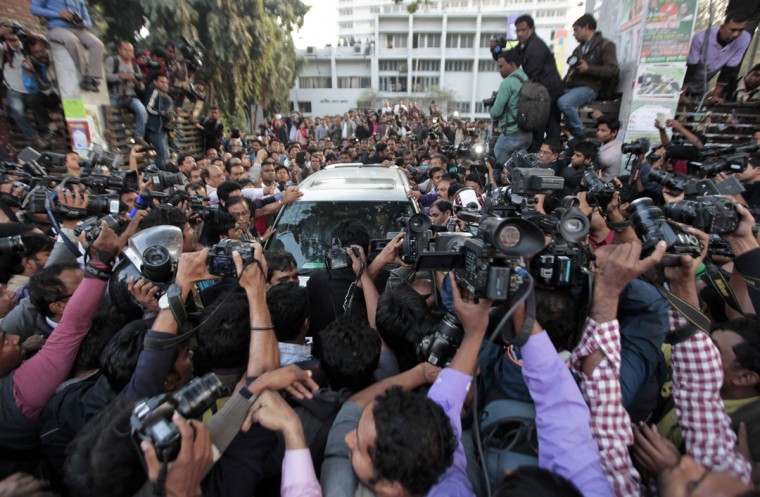 Journalists surround the car carrying Mirza Fakhrul Islam Alamgir, acting secretary general of the opposition Bangladesh Nationalist Party, after he was arrested reportedly for arson and vandalism, among other charges, from the National Press Club, in Dhaka, Bangladesh, Tuesday, Jan. 6, 2015. Clashes between police and opposition activists and a separate attack by unidentified gunmen left at least four people dead in Bangladesh on Monday amid heightened tensions on the anniversary of elections boycotted by the major opposition alliance last year. The Jan. 5 elections last year were boycotted by a major opposition alliance led by former Prime Minister Khaleda Zia. Tensions heated up recently after Prime Minister Sheikh Hasina’s Awami League party said it would hold rallies to celebrate the anniversary, while Zia, her archrival, announced that anti-government protests would take place. (AP Photo/ A.M. Ahad) 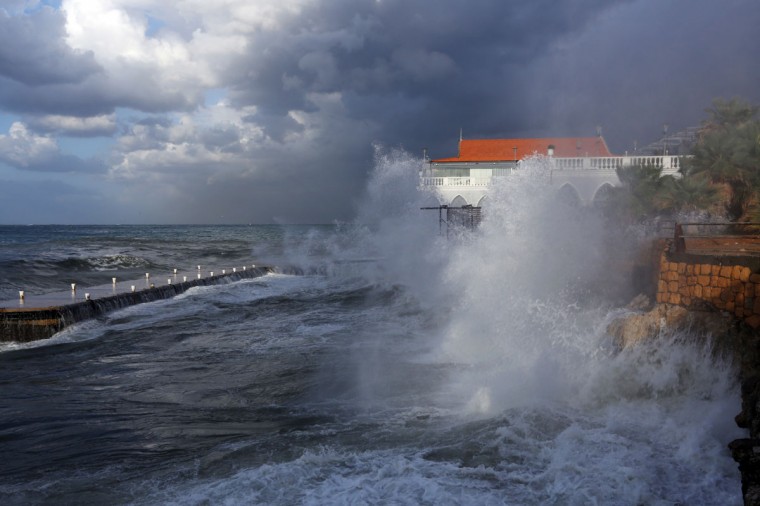 Huge waves crash on the sea defense wall of a restaurant, at the Beirut corniche, Lebanon, Tuesday, Jan. 6, 2015. Lebanon is under the effects of a blustery storm, dropped torrential rain and snow and pushed temperatures below freezing in northern Lebanon and some areas of the Bekaa Valley, which is dotted with informal Syrian refugee settlements. (AP Photo/Bilal Hussein)