In 1931, Gerald Griffin wrote for The Sun that “in slight over a year, there will be a great bustling and stirring about in the region of Calvert and Fayette streets, as a result of which Baltimoreans again will find their post office back at its old stand, but in a new building.

Baltimoreans are quite generally familiar with the fact that the old building was not torn down because it was structurally unsafe or “worn out”; for it was constructed so solidly that its existence would have approached a theoretical “forever,” but the enormous growth in the volume of mail handled in Baltimore — from 146,604,622 pieces of ordinary mail in 1890 to 733,484,969 in 1930 — made it essential that an additional room and facilities be provided, and it was decided to erect the new building on the desirable site of the old one, a choice also made logical by the fact the Federal Government owned the ground.” 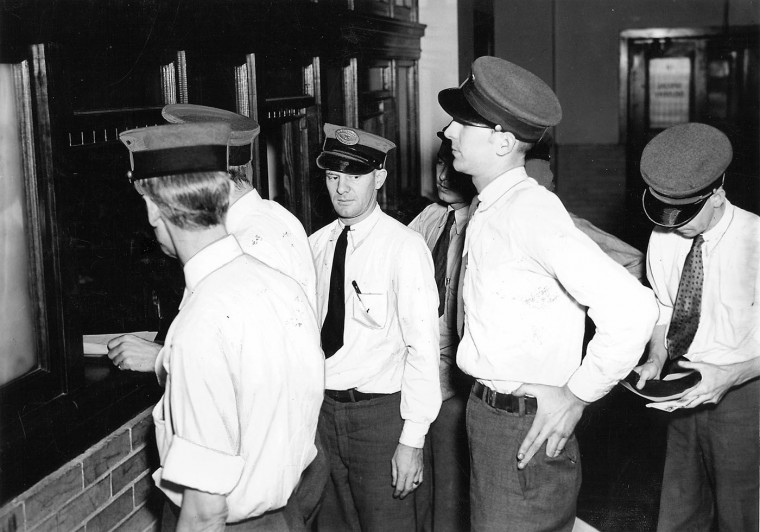 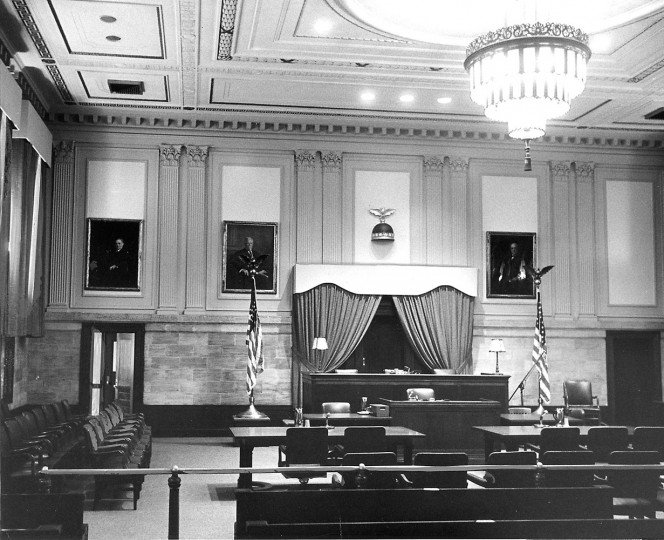 A federal courtroom in the Post Office building was found “worth preserving,” as seen on Sept. 27, 1970. 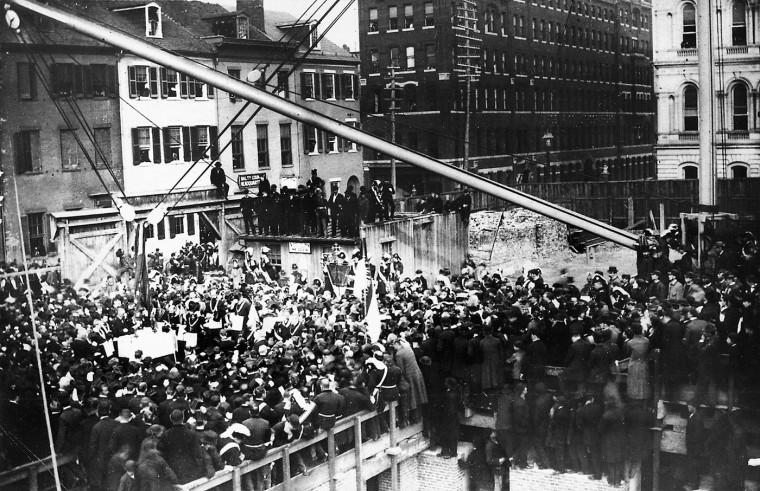 Laying the cornerstone at Calvert, Fayette on March 9, 1931. 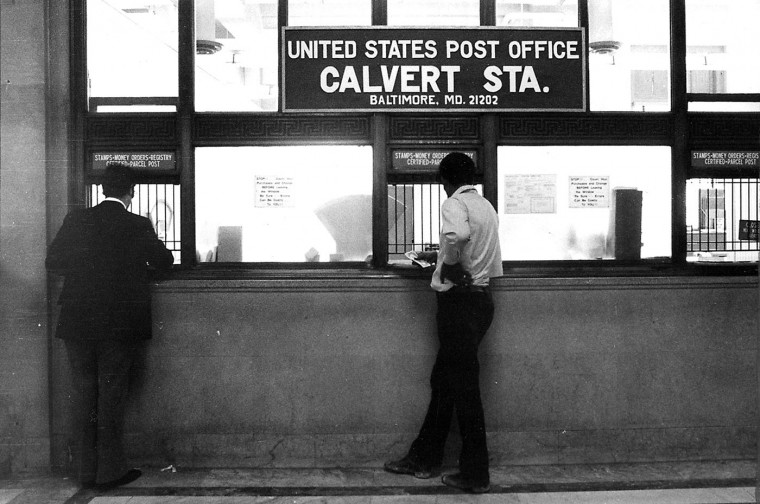 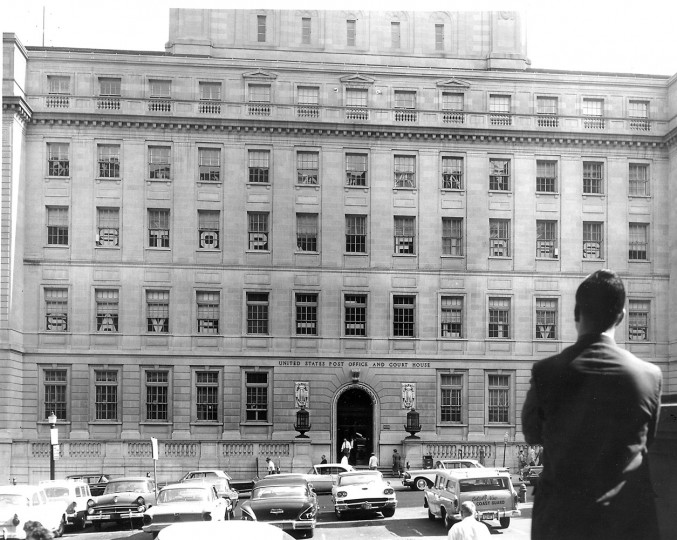 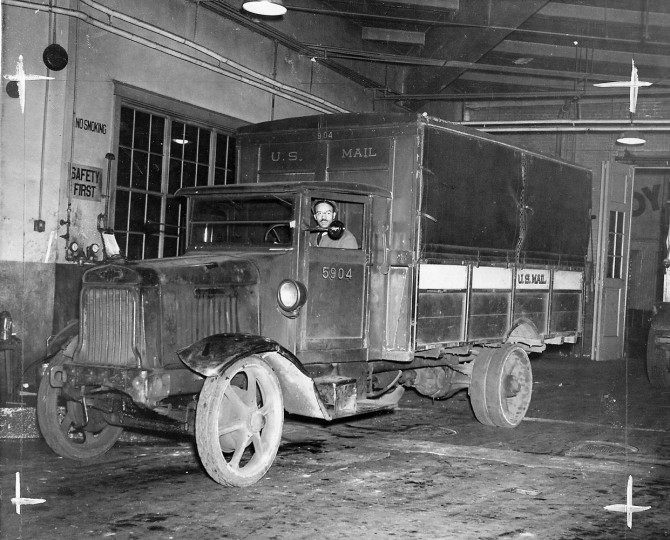 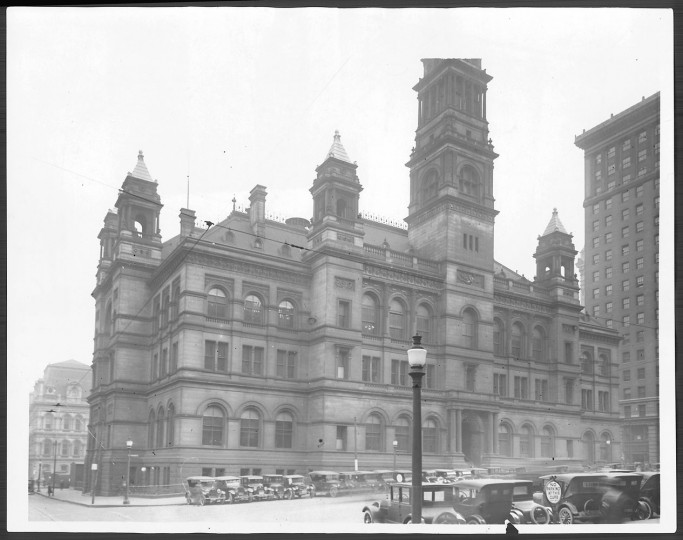 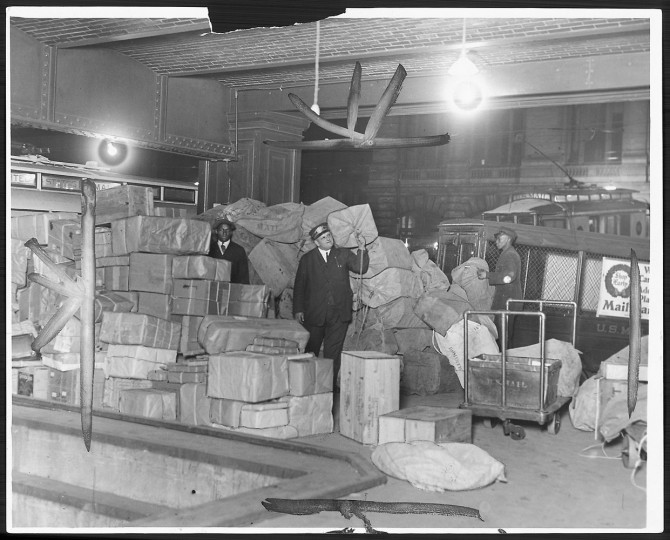 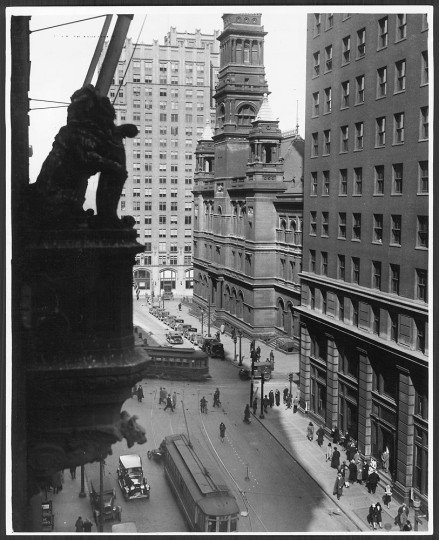 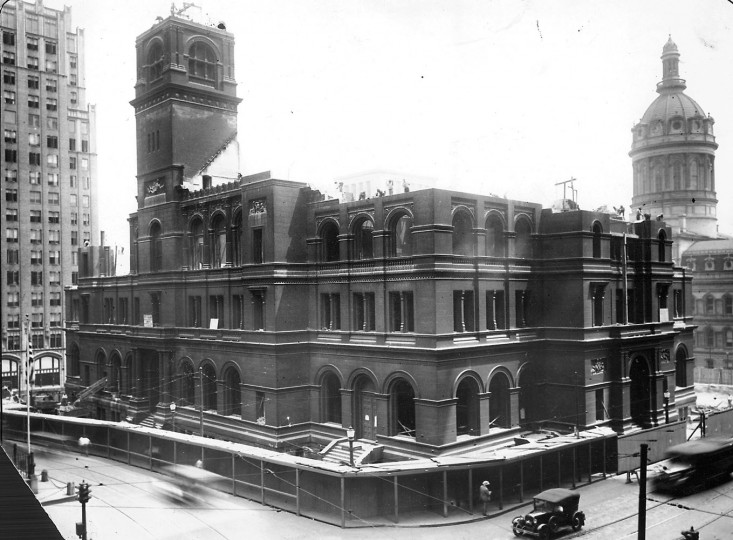 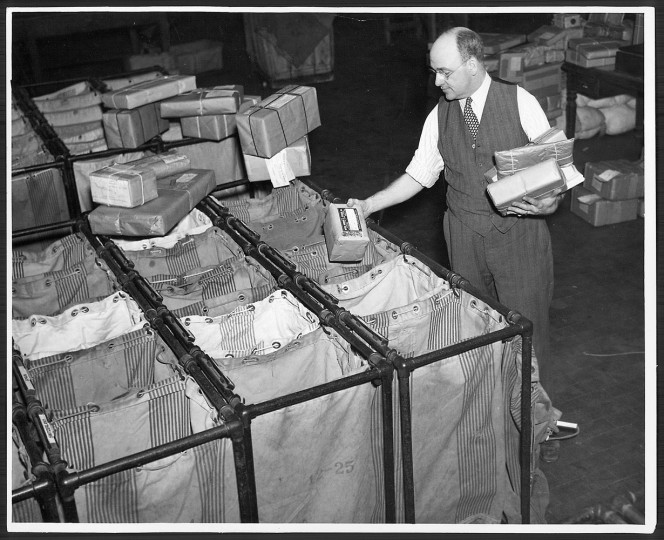 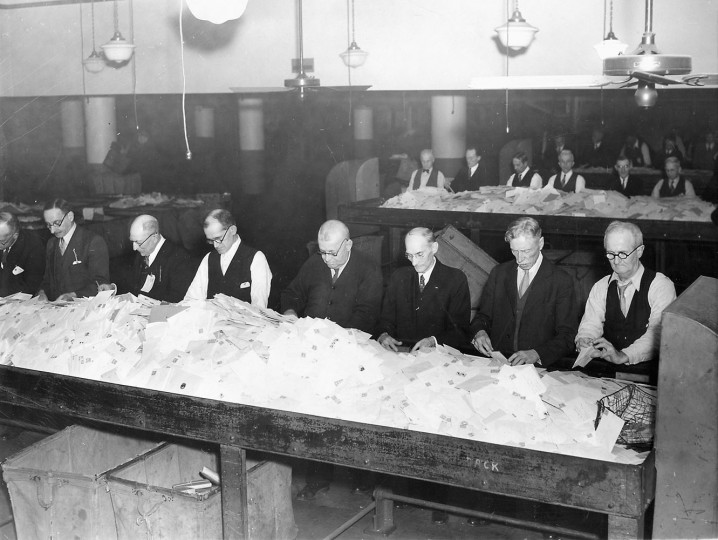 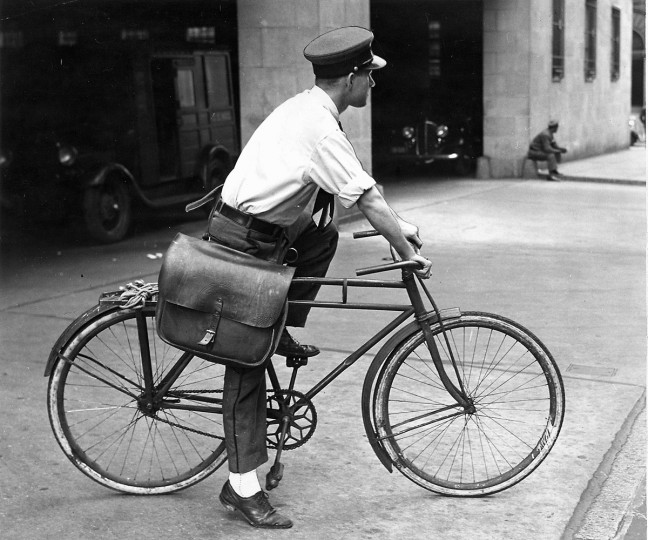 The last of the bicycle riders in the special delivery service , taken Nov. 11, 1939. 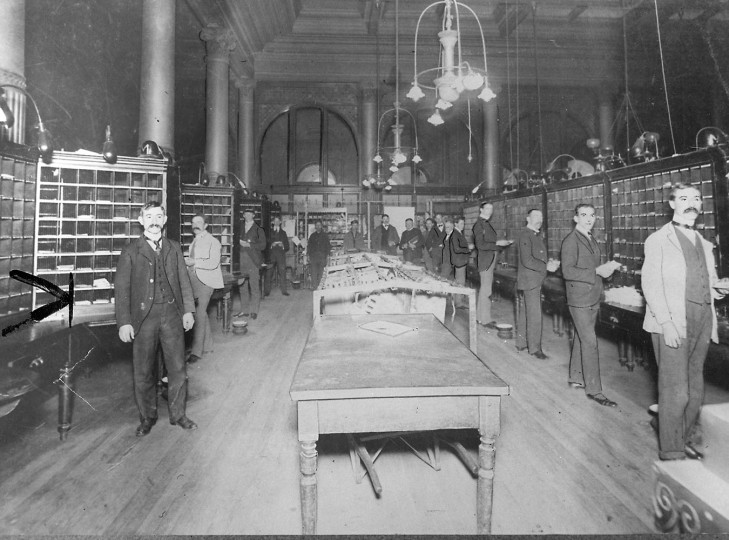 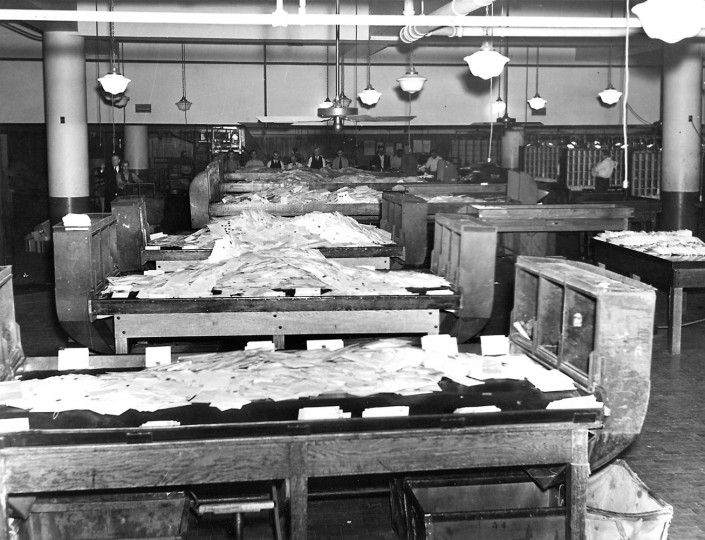 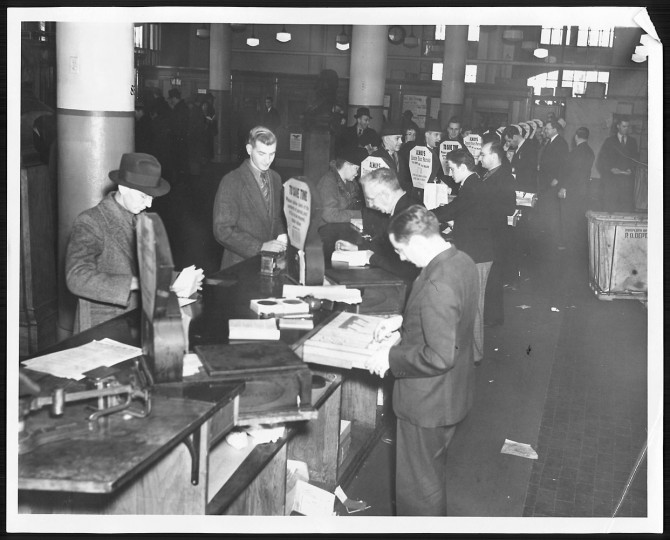 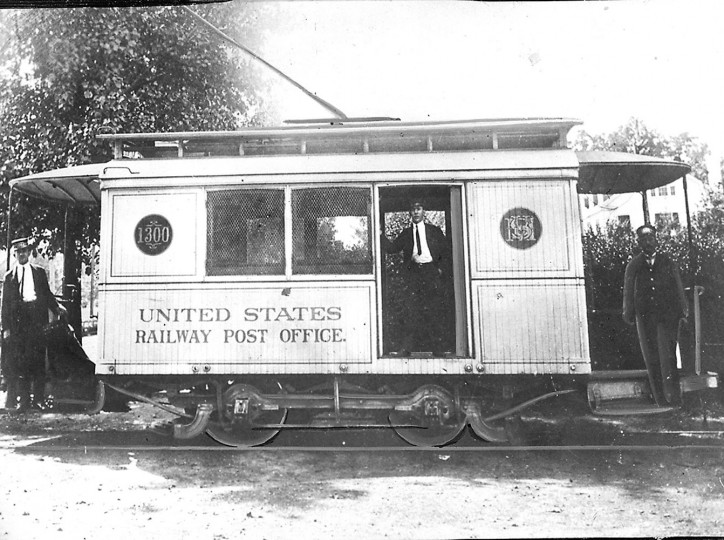 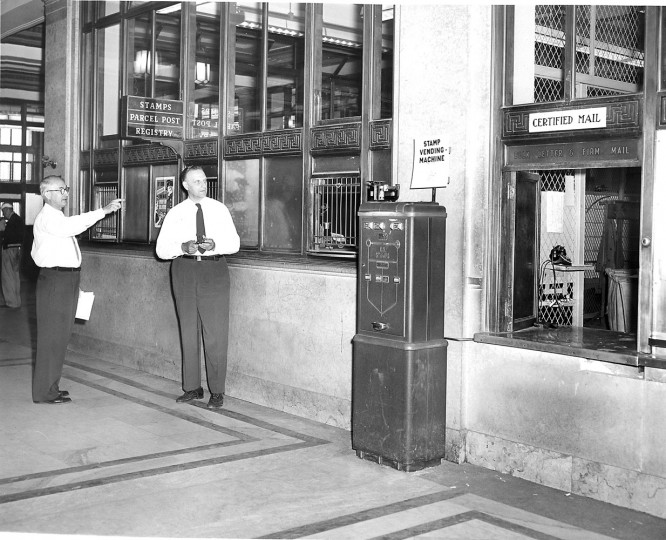 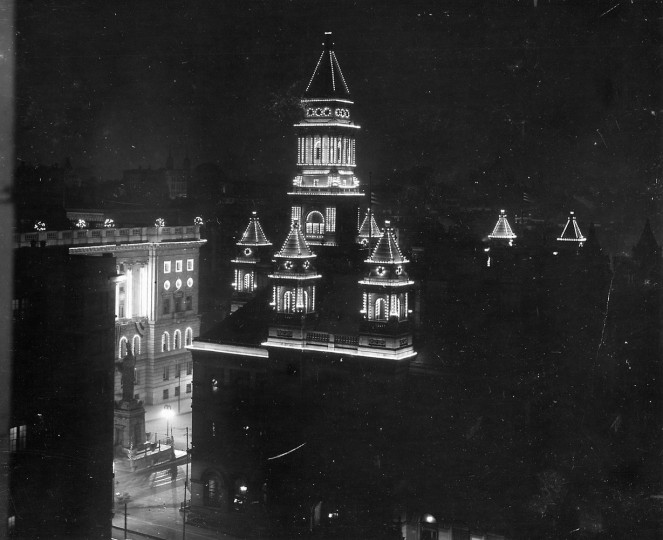 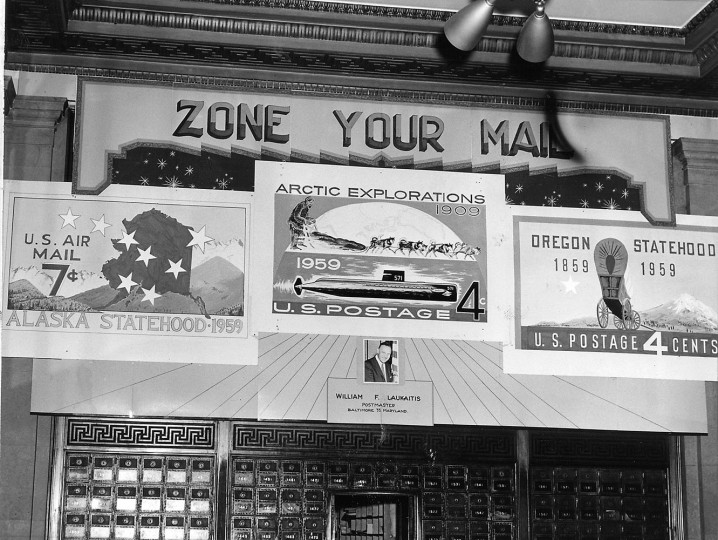 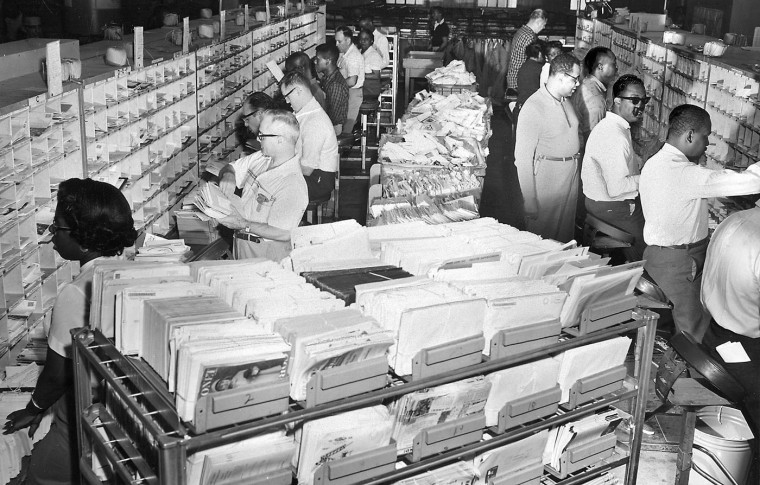 Clerks dig into the mountain of mail that descends on the city’s main post office each day. Sun file photo taken May 14, 1961. 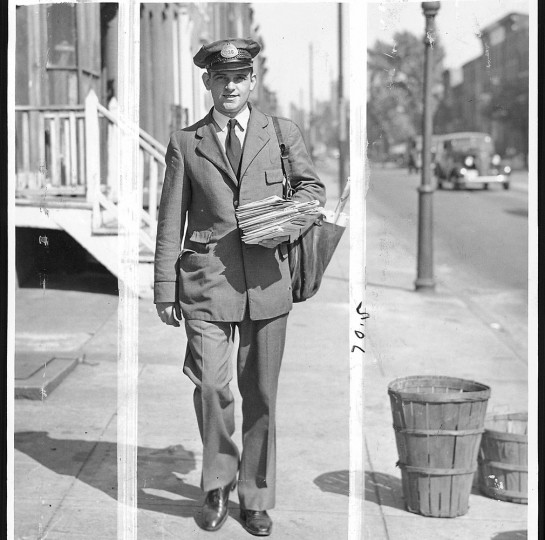 No matter the weather rain or shine, snow or sleet the postman is out delivering the mail. Sun file photo taken Sept. 21, 1937. 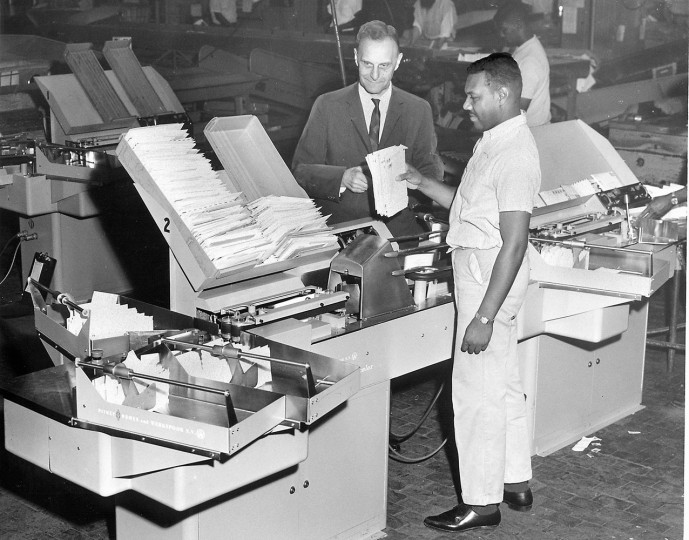 William Laukaitis and clerk Mike Tyson in 1963. Baltimore is one of more than 150 cities in the nation where the Mark II is in operation or is scheduled for installation. 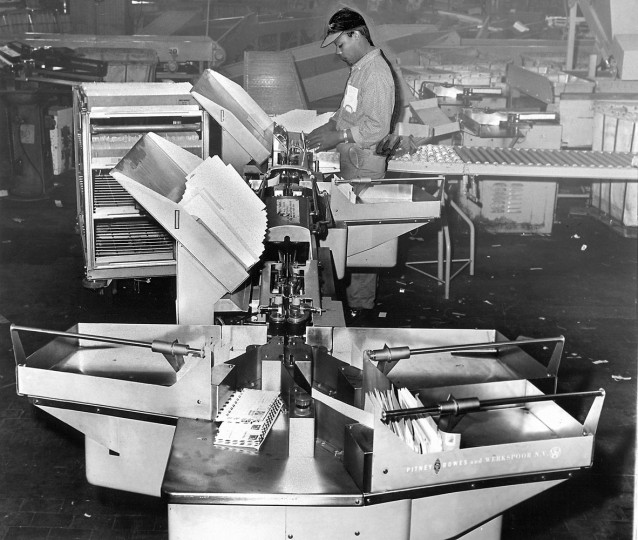 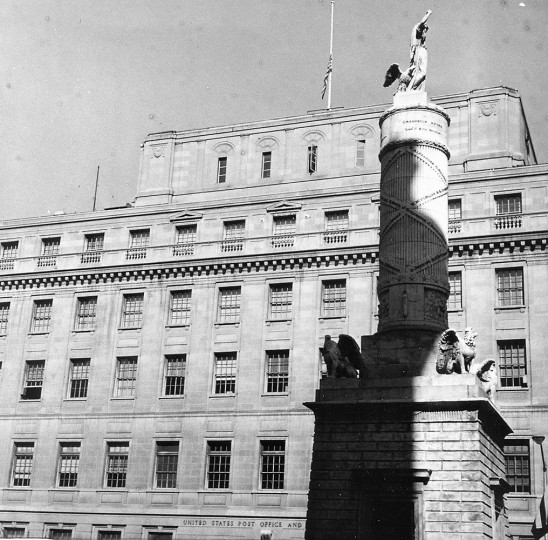 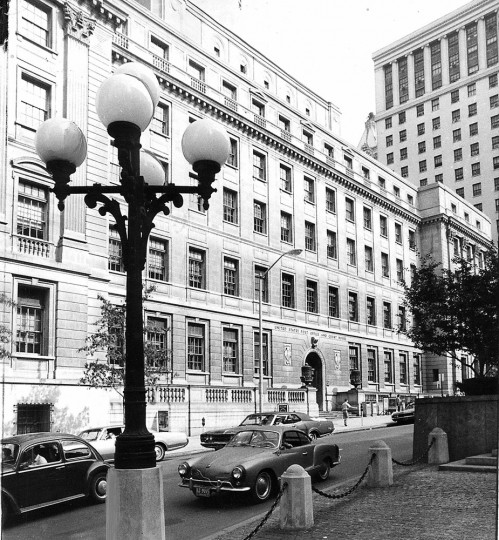 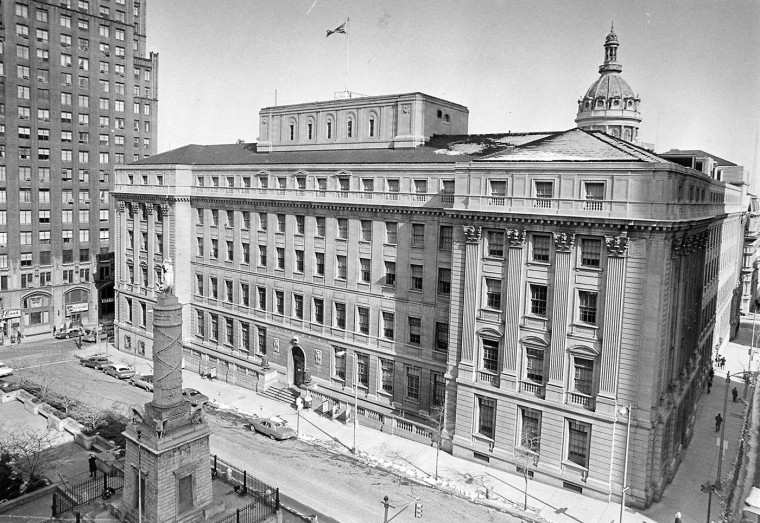 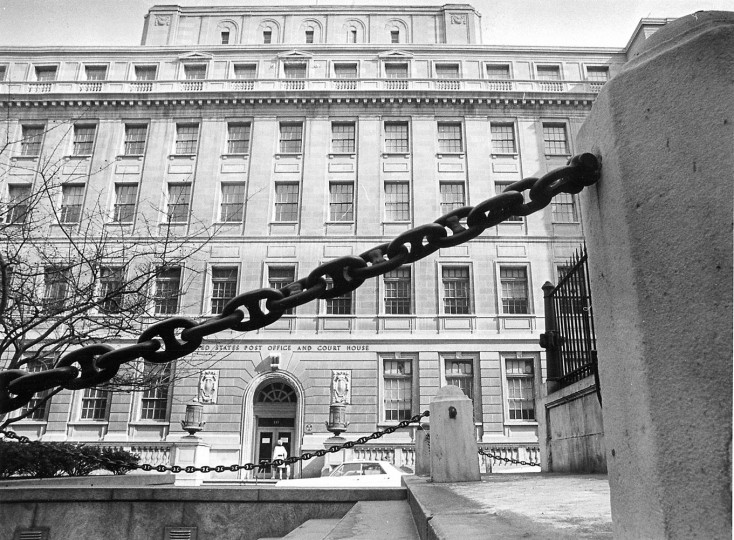 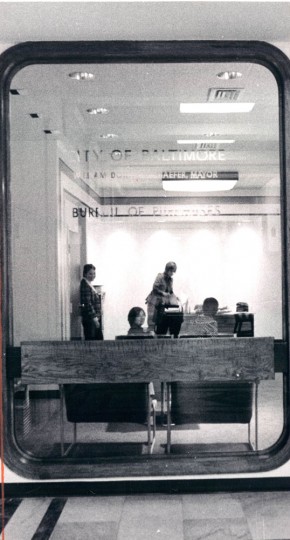 The building was also slated to have a number of features not previously found in postoffices in Baltimore, including a radio and telegraph transmission office on the sixth floor, to be used only for Federal business, and a cafeteria designed to cater to some 2,000 persons on a 24-hour basis.

A large tunnel was to run from the northwest corner of the postoffice, under Calvert and Lexington streets, to the Federal Reserve branch bank, across the way. All postoffice funds were to be removed from the building through this tunnel — heavily walled and more than 7 feet wide. The annual postal receipts in Baltimore increased from $668,912 in 1890 when the old building was first put to use, to $6,671,283 in 1930. Money-order transactions topped $33 million, up from $2.8 million.

The first floor was to be the one most familiar to the public — the headquarters for the stamp, money order, registry, general-delivery, claim and lock-box divisions, with entrances from Calvert and Fayette streets.

At first glance, from the Calvert Street side, the building appears only 5 stories high, since its mansard roof partially conceals the sixth floor. On the inner sides of the E-shaped building — designed to admit a maximum amount of light into the offices — the sixth floor becomes more apparent. The building, constructed of indiana limestone with interiors of marble and mahogany trim, was budgeted for $3.3 million in 1928.

The site was the eleventh occupied for postoffice purposes in Baltimore since the establishment of the first postoffice here shortly after 1750. Postal history in Maryland, however, dates further back; in 1683 the first post route in the American colonies, authorized by the King of England, ran from Philadelphia into Maryland and inevitably, Maryland was on the main road of the post route from Boston to Virginia.

By 1727, the general postoffice for Maryland was at Annapolis, from which point the mail went to Philadelphia, once each two weeks in the summer and once a month in the winter. Baltimore’s first post office building stood at French Street and the old Joppa road, established as a clearing-house for mail in 1751. It had no official postmaster.

Prior to 1796, mail from Philadelphia had to come by boat to New Castle, across the country to the head of the Elk river, and by boat to Baltimore. In that year, however, a chance was made and the mail came by daily stage via Wilmington and Havre de Grace.

Baltimore’s first official postmaster was not a postmaster, but a postmistress — the first in America. She was Miss Mary K. Goddard, first appointed in 1775. In all, she held the office for 22 years. WHen she was first appointed, the office was at the southeast corner of Baltimore and South streets, which later became the site of The Sun Iron Building. During those years, the office was moved about with abandon, and it was at St. Paul street and Bank Lane when Maryland’s first mail robbery and murder on any of the post routes took place. The driver was killed and the mail was stolen while he was but a few miles from Baltimore, on the Philadelphia road.

In 1835, mail coaches between Baltimore and Washington gave way to steam mail trains, which marked the beginning of the modern era of rapid mail transportation. In 1890, at the time of the completion of what was then the new postoffice building, Baltimore had a population of 434,439, and its postoffice served an area of 32 square miles.