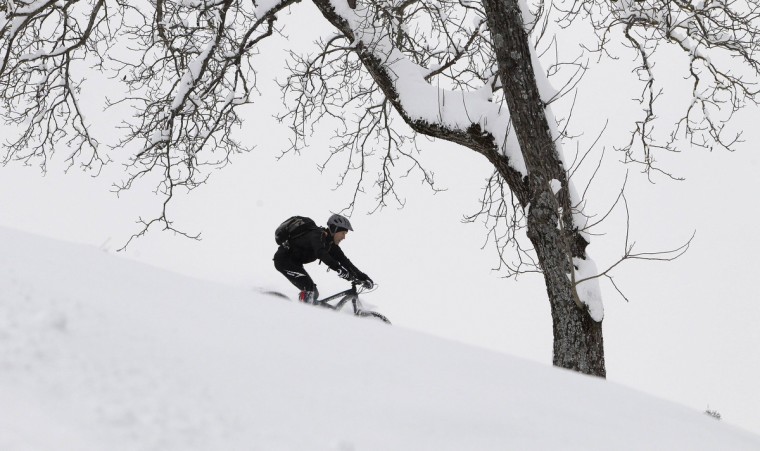 A man rides his bike through newly fallen snow in Medvode. According to local authorities, about 50 cm of snow fell overnight causing minor problems in traffic. (Srdjan Zivulovic/Reuters) 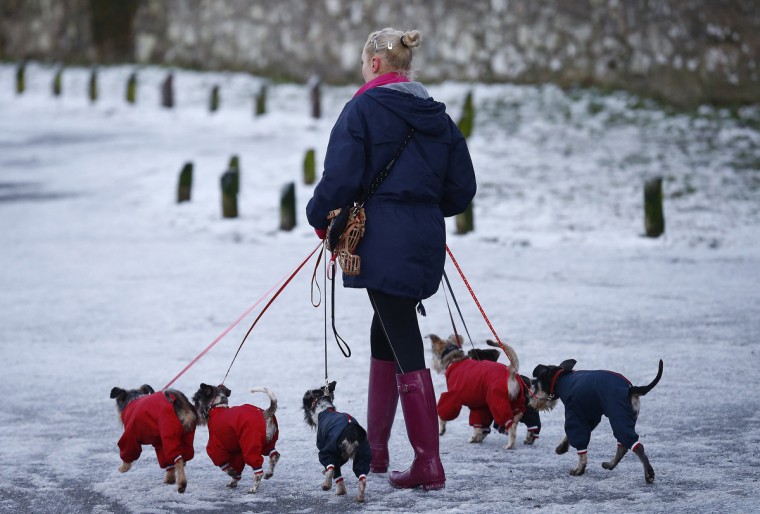 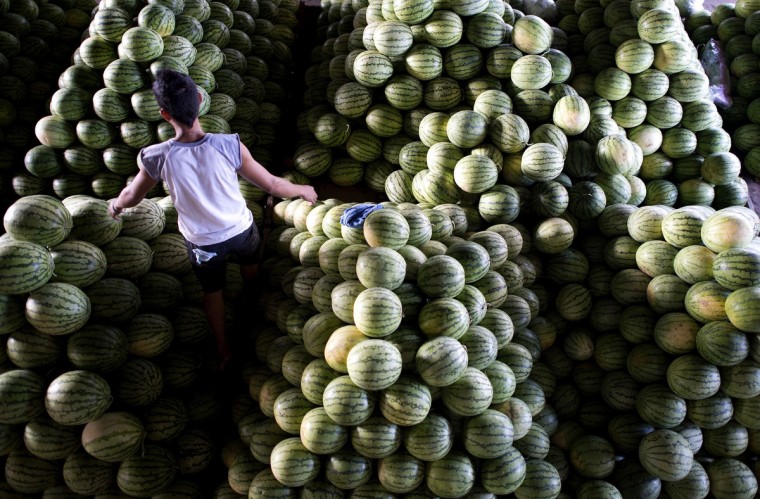 A worker (Centre L) arranges watermelons at a market in Manila. Filipinos believe that displaying 12 different round-shaped fruits – one representing each month of the year – at home before New Year’s Day welcomes prosperity. (Noel Celis/Getty Images) 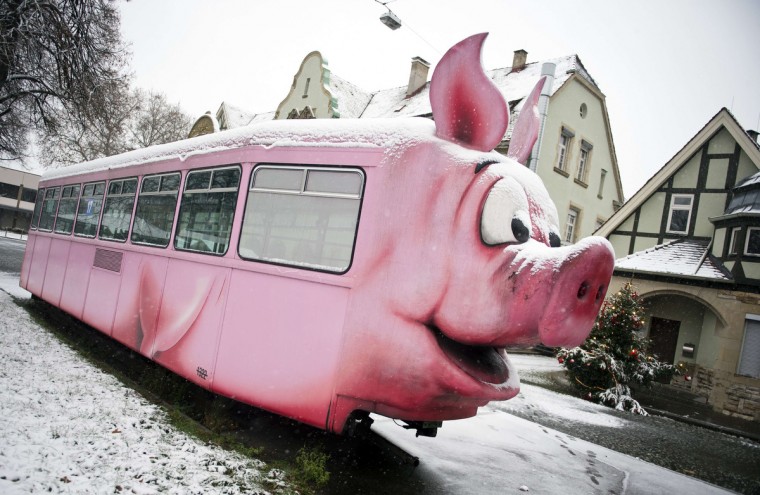 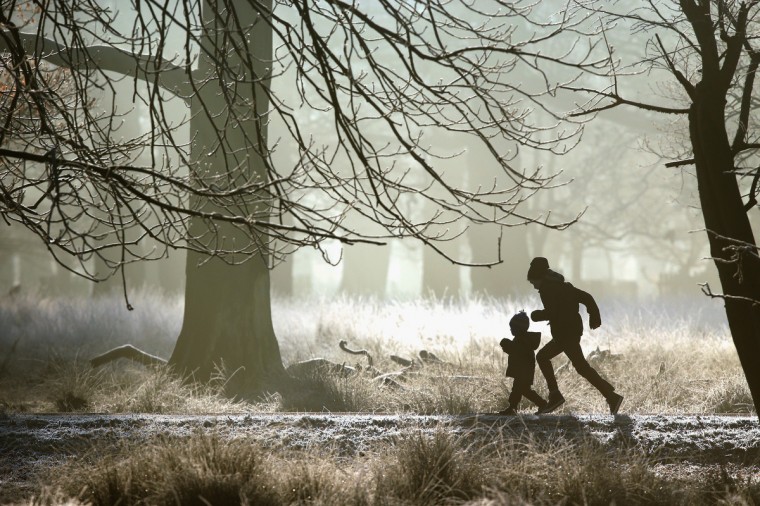 A young family enjoy a brisk early morning walk as overnight frost clings to the fauna and flora at the National Trust’s Dunham Massey Park in Altrincham, United Kingdom. Many parts of the UK have had snowfall and below freezing temperatures overnight causing traffic problems on some roads. The MET office has issued warnings of further plummeting temperatures and possible snow fall. (Christopher Furlong/Getty Images) 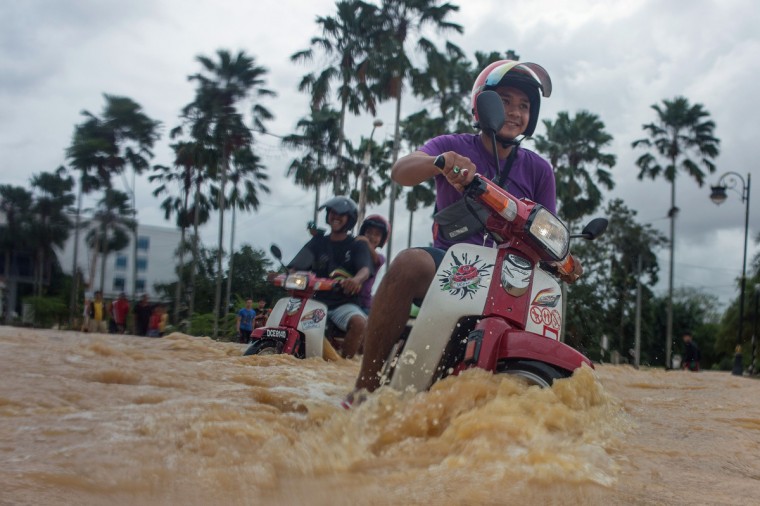 Local residents use their motorbikes to maneuver through floodwaters in Kota Bahru. Malaysia on December 28 pledged more funds to help over 160,000 people hit by the country’s worst flooding in decades, as forecasters warned fresh rain could hamper efforts to relieve thousands left stranded by the waters. (Mohd Rasfan/Getty Images) 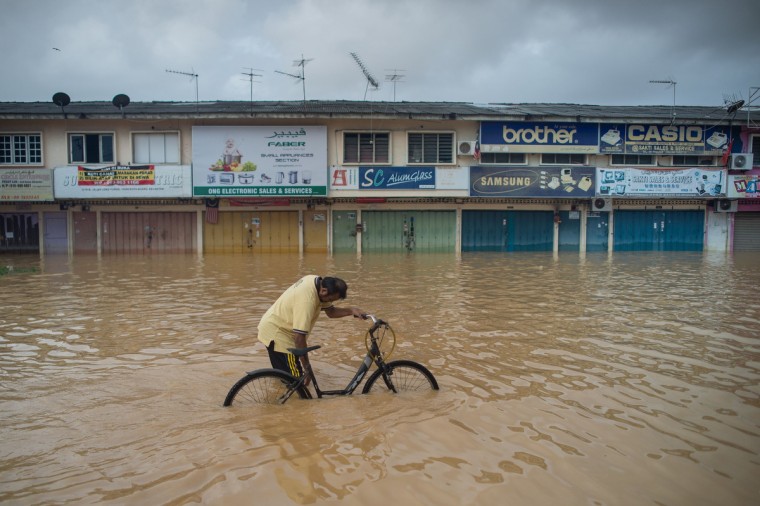 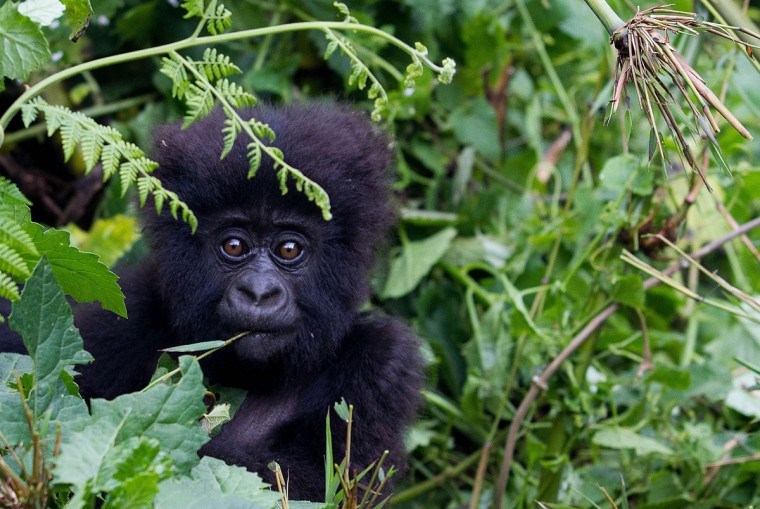 A baby mountain Gorilla, member of the Agashya family, is pictured in the Sabyinyo Mountains of Rwanda. Rwanda, well known for mountain gorillas an endangered species found only in the border areas between Rwanda, Uganda and the Democratic Republic of the Congo and hosted more than a million visitors between 2006-13, generating from the national parks alone $75m (£44m) in tourism revenue in that time; 85% of this is from trekkers who come to see some of the country’s 500 gorillas. (Ivan Lieman/Getty Images) 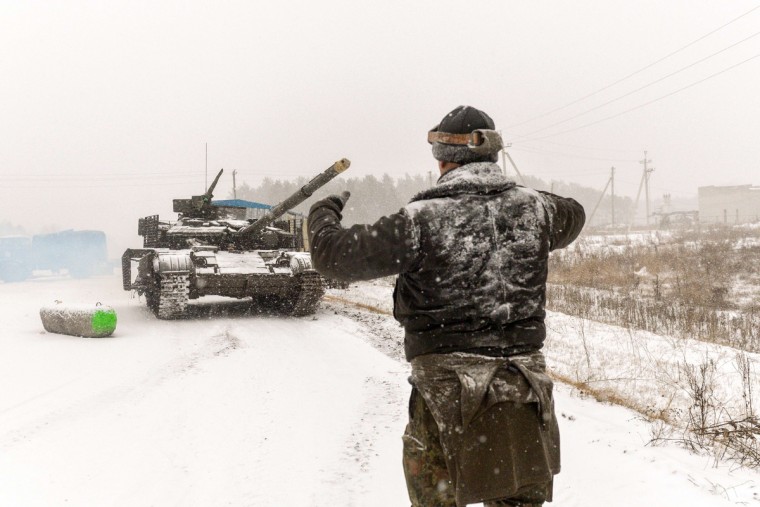 A Ukrainian serviceman corrects movement of a tank near the eastern Ukrainian city of Schastya, Lugansk region. (Sergey Bobok/Getty Images) 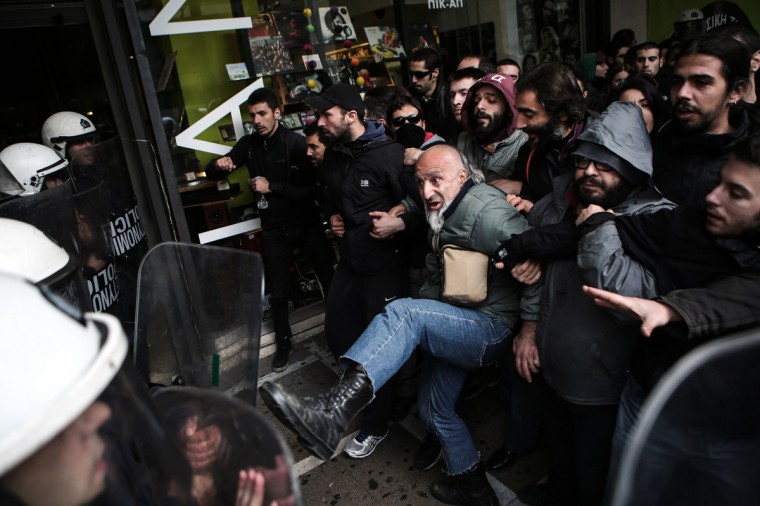 Protesters clash with riot police in front of the bookstore ”IANOS” in Athens during a demonstration against the government’s decision to allow shops to open for more than two Sundays a year. (Angelos Tzortzinis/Getty Images) 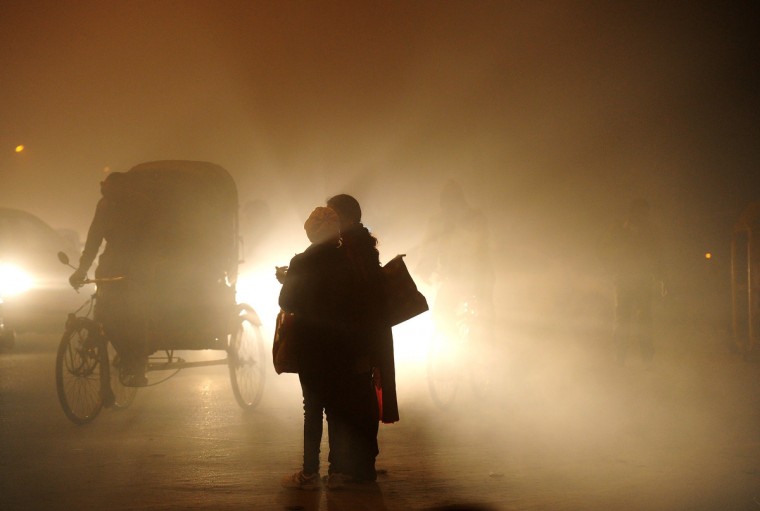 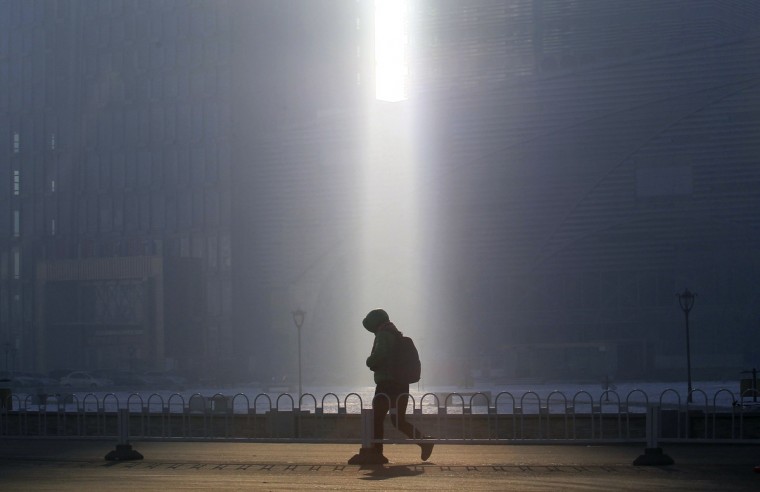 A pedestrian walks past a beam of sunlight cast through two buildings amid heavy smog in Shenyang, Liaoning province . China plans tougher pollution limits and heavier penalties in a revision of its air pollution law, state-run news agency Xinhua said, as the government battles to reduce smog that takes hundreds of thousands of lives each year. (Reuters) 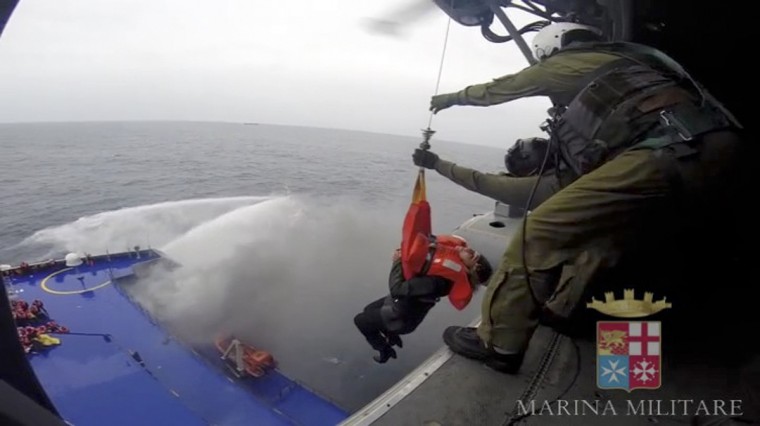 A person is lifted on an Italian Navy helicopter as the car ferry Norman Atlantic burns in waters off Greece in this handout video grab of the Italian Marina Militare. Italian and Greek helicopter crews prepared to work through the night to airlift passengers in pairs off a burning ferry adrift in the Adriatic Sea, battling darkness and bad weather that hampered rescue efforts by other ships throughout Sunday. (Marina Militare/Handout via Reuters) 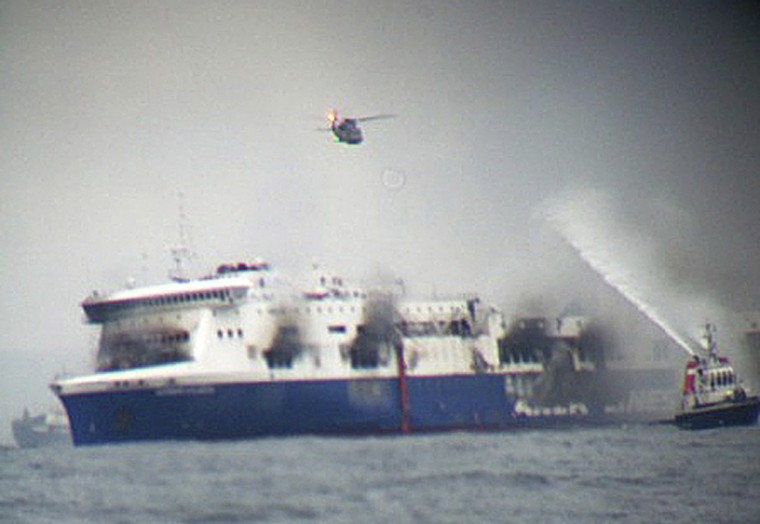 A rescue helicopter flies over the burning car ferry Norman Atlantic as a fire fighting tug boat douches the vessel in the south Adriatic sea December 28, 2014. Hundreds of passengers were trapped on the ferry off Greece on Sunday, pleading to be rescued by a flotilla of nearby ships that battled storm conditions in open water to try to reach them. The Greek coastguard said 150 people had been saved from the Italian-registered Norman Atlantic, which was carrying almost 500 passengers and crew when it sent a distress signal after fire broke out on its lower deck. (Skai TV/Reuters) 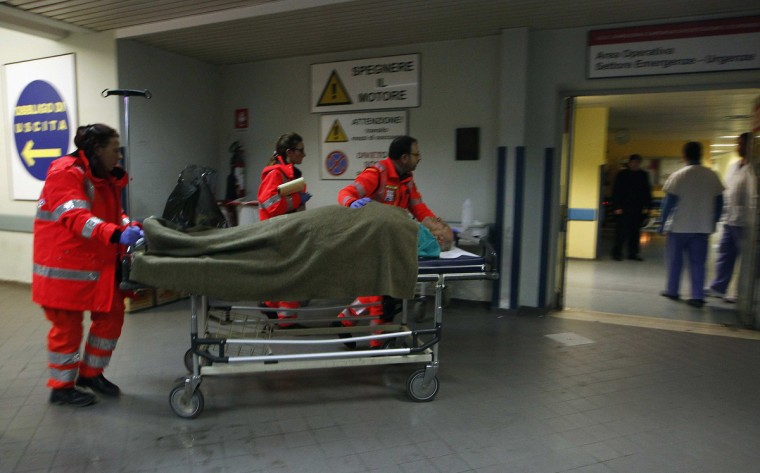 A person rescued from the Norman Atlantic vessel in the Adriatic sea is carried by medics off the ambulance as they arrive at the Antonio Perrino hospital in Brindisi. Italian and Greek helicopter crews prepared to work through the night to airlift passengers in pairs off a burning ferry adrift in the Adriatic Sea, battling darkness and bad weather that hampered rescue efforts by other ships throughout Sunday. (Ciro De Luca/Reuters) 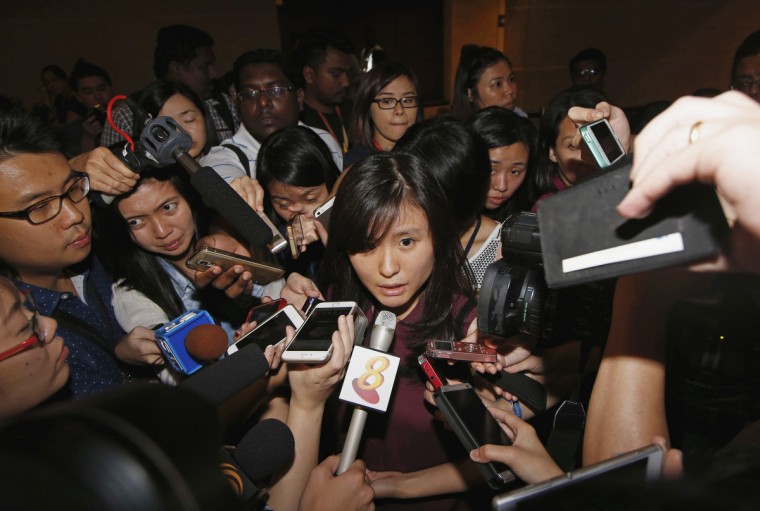 Louis Sidharta (C), a 25-year-old Indonesian whose fiance was onboard the AirAsia flight QZ8501, speaks to the media at a waiting area for next-of-kin and relatives at Changi Airport in Singapore. Indonesia’s air force was searching for the AirAsia plane carrying 162 people that went missing on Sunday after the pilots asked to change course to avoid bad weather during a flight from the Indonesian city of Surabaya to Singapore. The Airbus 320-200 lost contact with Jakarta air traffic control at 6:17 a.m. (2317 GMT), officials said. (Edgar Su/Reuters) 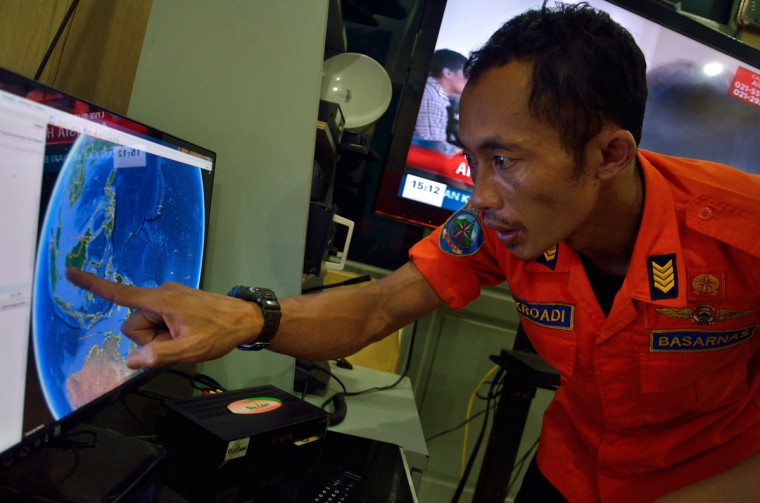 An official from Indonesia’s national search and rescue agency in Medan, North Sumatra points at his computer screen to the position where AirAsia flight QZ8501 went missing off the waters of Indonesia. The AirAsia Airbus plane with 162 people on board went missing en route from Indonesia to Singapore early on December 28, officials and the airline said, in the third major incident to affect a Malaysian carrier this year. (Sutanta Aditya/Getty Images) 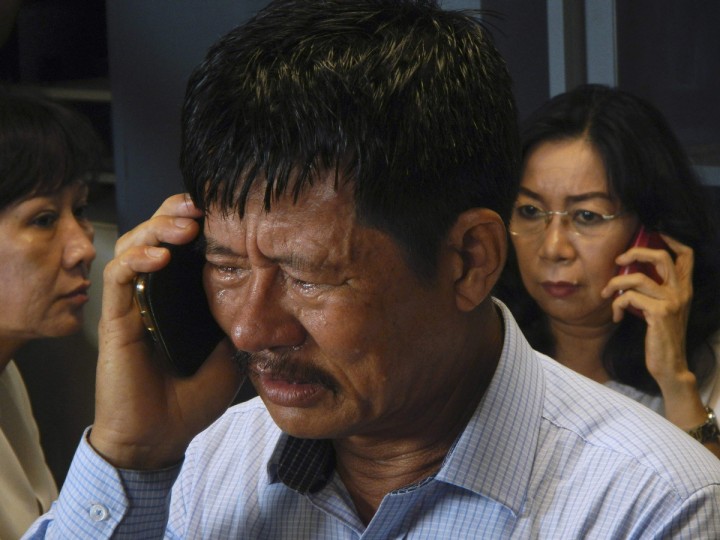 Family members of passengers on board AirAsia flight QZ 8501 talk on their phones while waiting for information inside a crisis centre at Juanda Airport in Surabaya, East Java December 28, 2014 in this photo taken by Antara Foto. An AirAsia flight with 162 people on board lost contact with air traffic control on Sunday after the pilots asked to change course to avoid bad weather during a flight from the Indonesian city of Surabaya to Singapore, Indonesian officials said. Indonesia AirAsia Flight QZ8501, an Airbus 320-200, lost contact with Jakarta air traffic control at 6:17 a.m. (11.17 p.m. BST), officials said. (Antara Foto/Suryanto/Reuters) 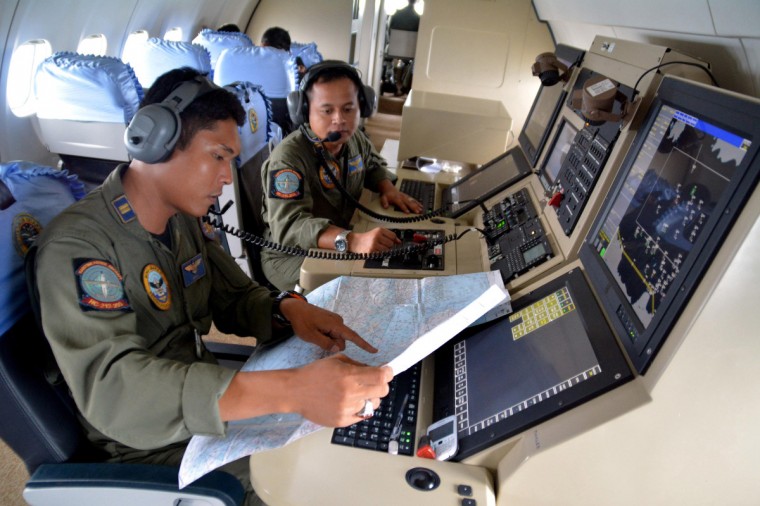 Two members of the Indonesian Navy’s Tactical Commanding Operator (TACCO) help with the search for AirAsia flight QZ 8501 on board a CN235 aircraft over Karimun Java, in the Java Sea December 28, 2014 in this photo taken by Antara Foto. The AirAsia flight with 162 people on board lost contact with air traffic control on Sunday after the pilots asked to change course to avoid bad weather during a flight from the Indonesian city of Surabaya to Singapore, Indonesian officials said. Indonesia AirAsia Flight QZ 8501, an Airbus 320-200, lost contact with the Jakarta air traffic control tower at 6:17 a.m. (2317 GMT), officials said. (Antara Foto/Eric Ireng/Reuters) 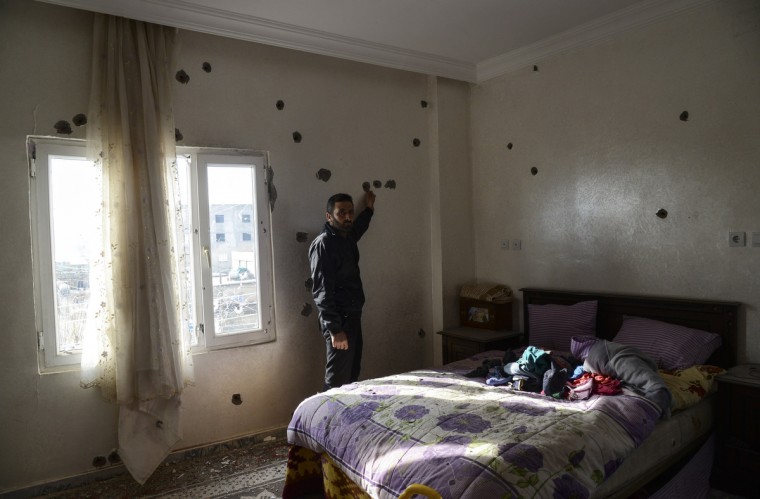 A man points out damage in his home after clashes between two rival Kurdish groups in the town of Cizre, Sirnak Province in south-eastern Turkey. Turkish Prime Minister Ahmet Davutoglu on December 28 warned that the government would take action against any further violence in the southeast after three people were killed in fresh clashes between two rival Kurdish groups. Three people were killed on December 27 in the town of Cizre in the southeast in clashes between rebels of the outlawed Kurdistan Workers’ Party (PKK) and the Sunni Muslim Huda-Par group. (Ilyas Akengin/Getty Images) 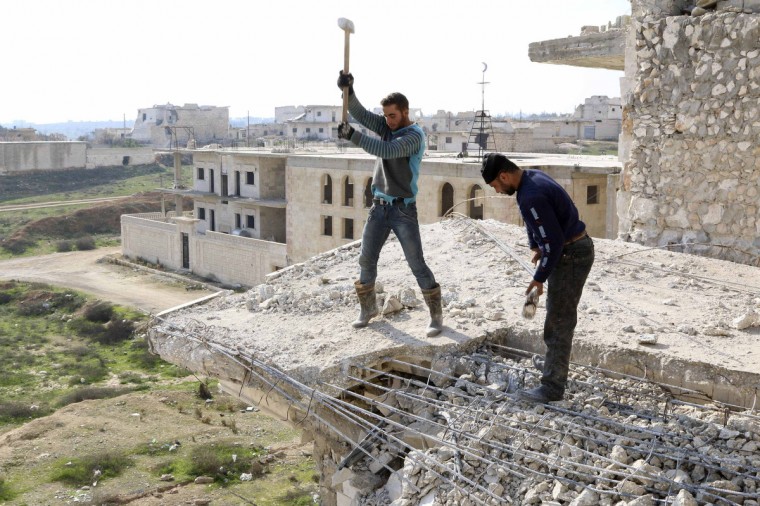 Men work on a damaged building in order to rebuild it at al-Hamidiya area, after rebel fighters took control of the area from forces loyal to Syria’s President Bashar al-Assad earlier this month in the northwestern province of Idlib. (Mahmoud Hebbo/Reuters) 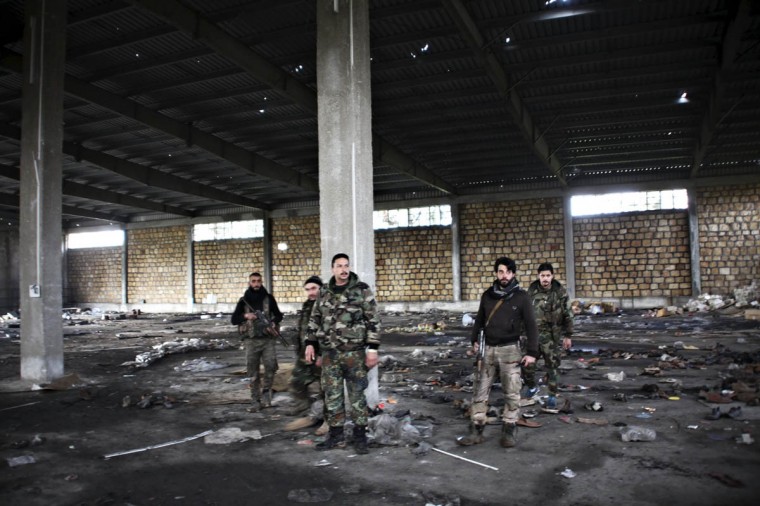 Rebel fighters rest inside a room at the old city of Aleppo near the frontline against forces loyal to Syria’s President Bashar al-Assad . (Jalal Al-Mamo/Reuters)