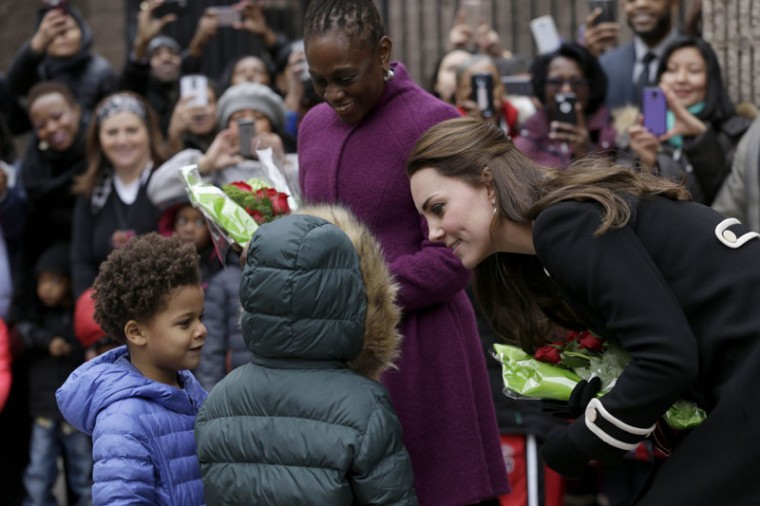 Catherine, Duchess of Cambridge right, and Chirlane McCray, the wife of the mayor of New York City, center, receive flowers from Andrew, 5, left, and Mila, 6, before leaving Northside Center for Child Development during her official two-day visit to the United States on December 8, 2014 in New York City. (Seth Wenig-Pool/Getty Images) 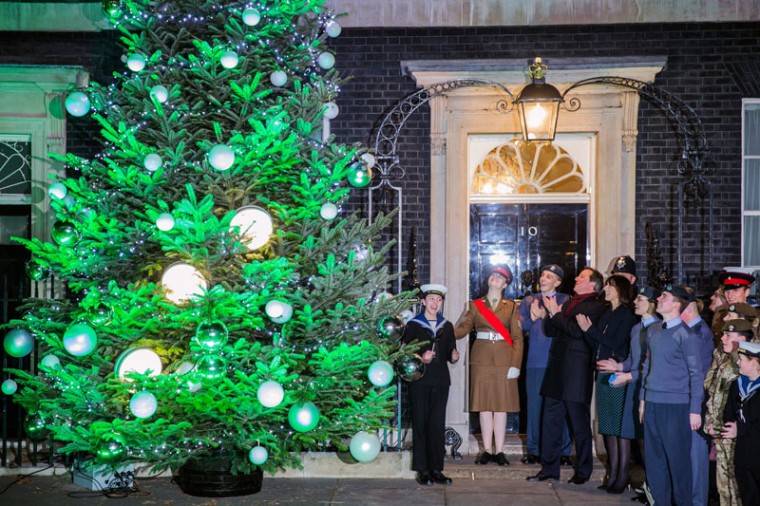 British Prime Minister David Cameron and wife Samantha Cameron join military and their families at the lighting of Downing Street’s Christmas tree at 10 Downing Street on December 8, 2014 in London, England. Oxfordshire tree Colin Griffith, from Dinmore Hill Trees at Festive Farm in Wellington, Hereford was selected to supply a pine tree to grace the steps of the prime ministers official residence in 2014. (Dan Kitwood/Getty Images) 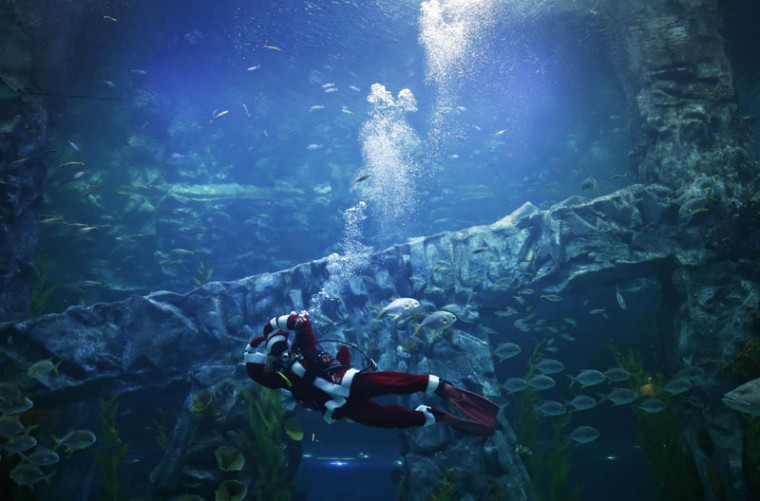 A diver dressed in a Santa Claus costume makes a heart gesture while performing during an event celebrating the upcoming Christmas holiday at Lotte World Aquarium in Seoul December 8, 2014. (Kim Hong-Ji/Reuters) 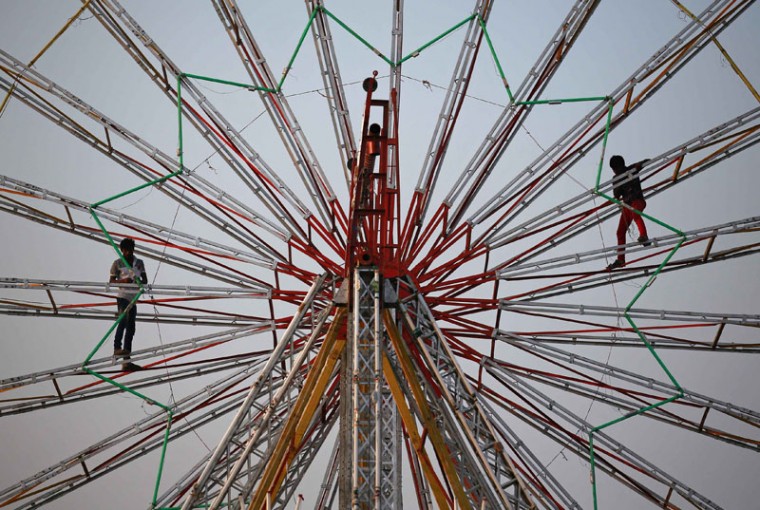 Workers install lights while standing on a ferris wheel at a fair in Mumbai December 8, 2014. (Danish Siddiqui/Reuters) 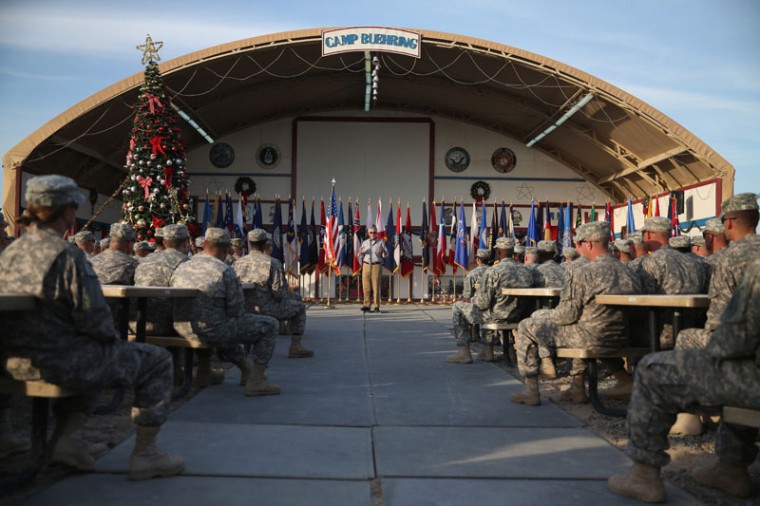 U.S. Secretary of Defense Chuck Hagel speaks to U.S. troops during a visit, December 8, 2014 at Camp Buehring, Kuwait. Secretary Hagel visited the camp which once was a staging post for troops headed to Iraq. (Mark Wilson/Getty Images) 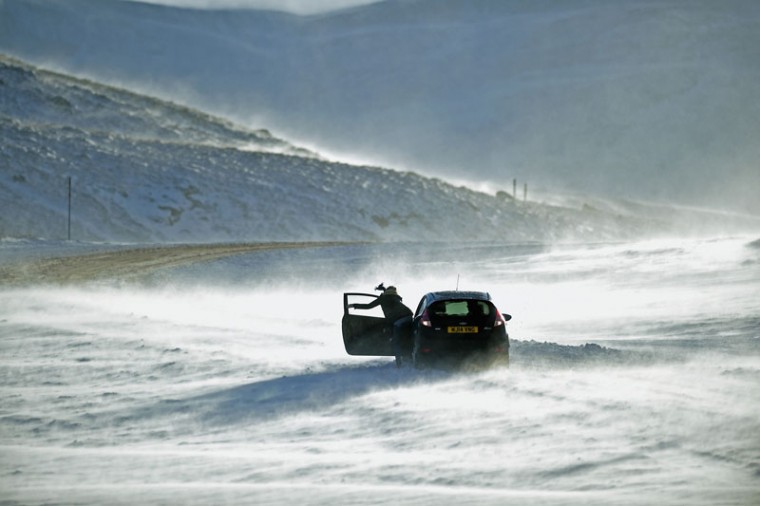 People push a car stuck on the A93 Braemar to Glenshee road as snow is forecast for much of the UK on December 8, 2014 in Glenshee, Scotland. The Met Office yellow ‘Be Aware’ warning remains in place across the country, with drivers struggling with snow fall overnight. (Jeff J Mitchell/Getty Images) 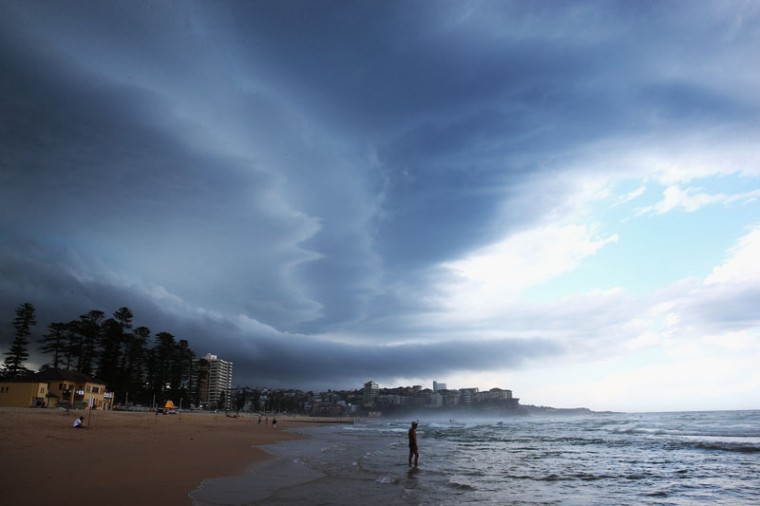 A large storm front moves over Manly Beach in Sydney, Australia. Storm conditions have hit residents of Sydney and surrounding areas over the past eight days which has brought hail, flash flooding and high winds. Meteorologists report that a stretch of consecutive severe weather for the start of summer has not been seen in the state for around a decade. (Cameron Spencer/Getty Images) 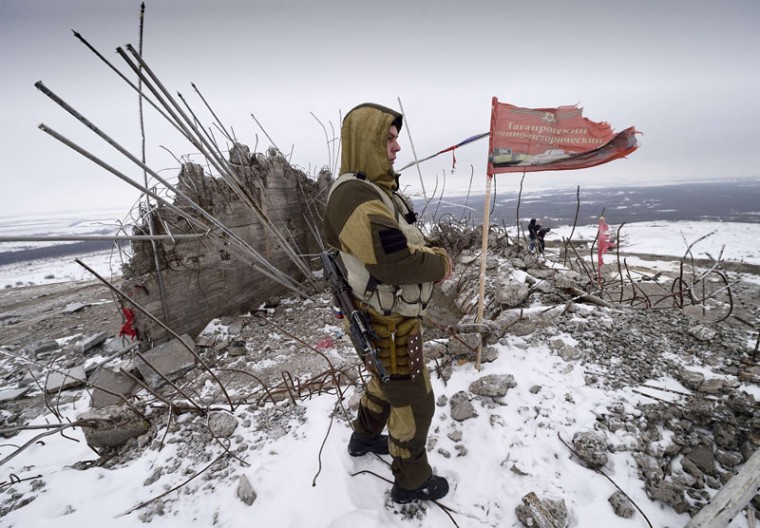 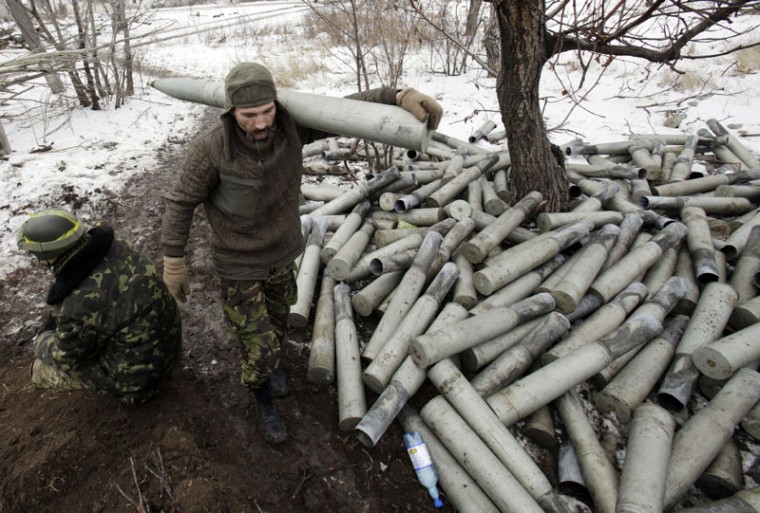 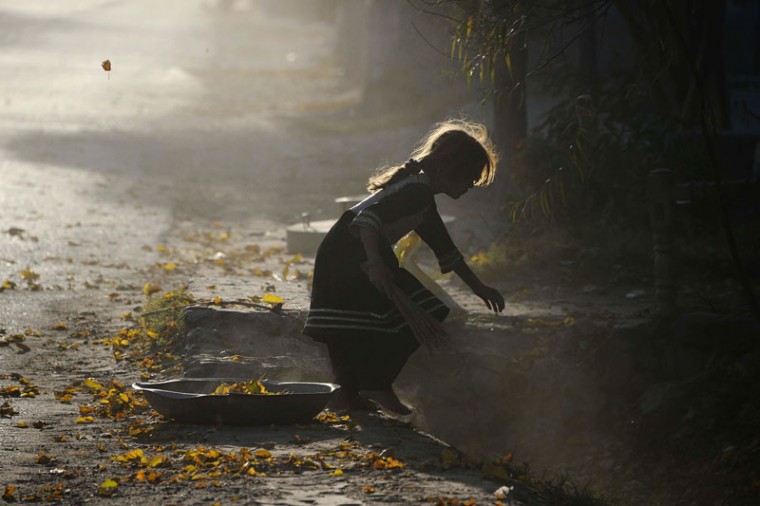 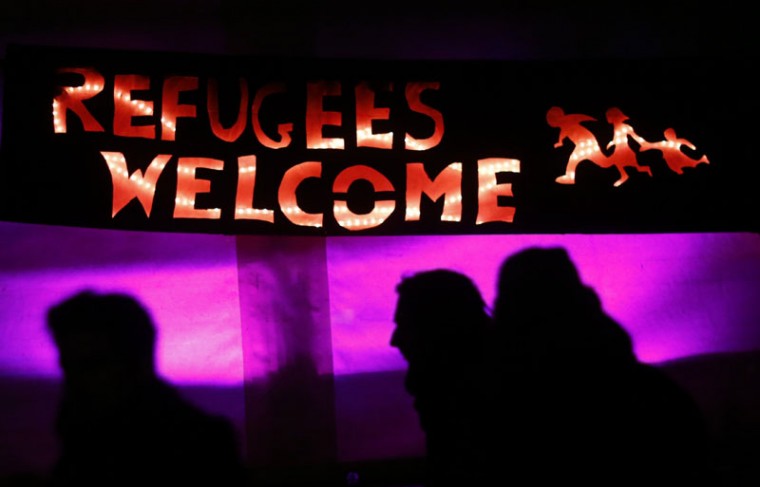 Counter protesters are silhouetted under a banner during a demonstration called by anti-immigration group PEGIDA, a German abbreviation for “Patriotic Europeans against the Islamization of the West”, in Dresden December 8, 2014. Opponents of Germany’s policy towards asylum seekers and Islam took part in the demonstration called by PEGIDA in the eastern German town on Monday. (Hannibal Hanschke/Reuters) 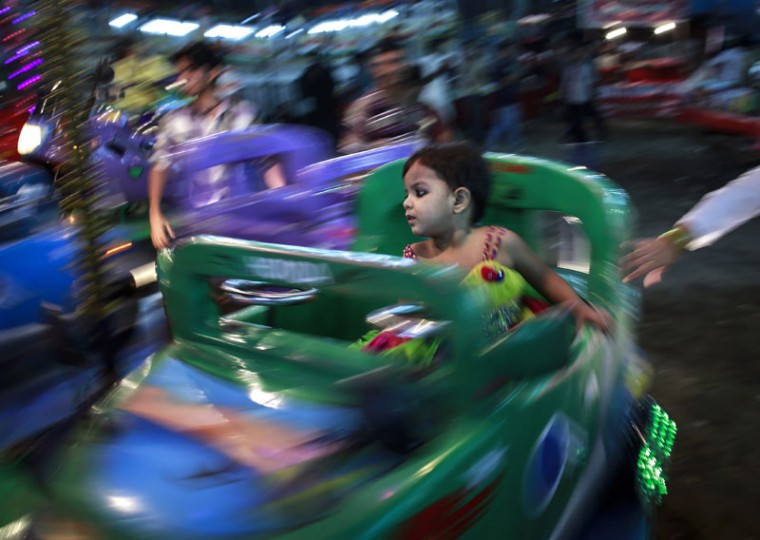 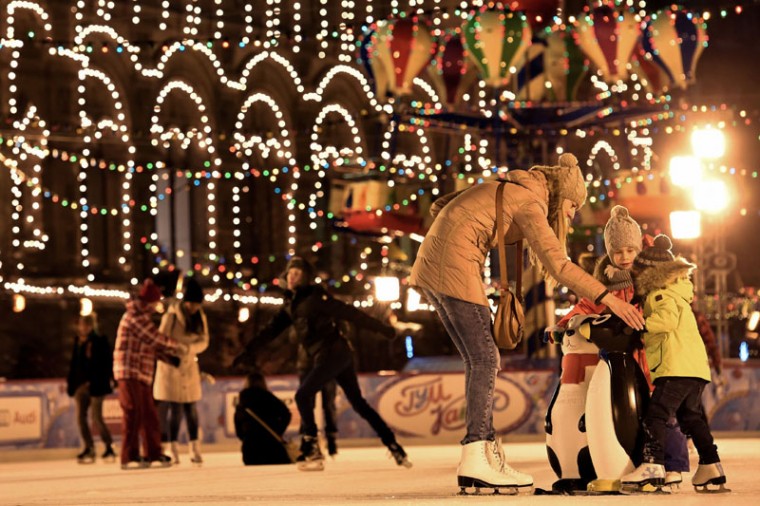 People ice skate during the annual Christmas fair on Red Square in Moscow on December 8, 2014. New Year’s is the biggest holiday of the year in Russia, followed by Orthodox Christmas celebrated on January 7. (Kirill Kudryavtsev/AFP/Getty Images) 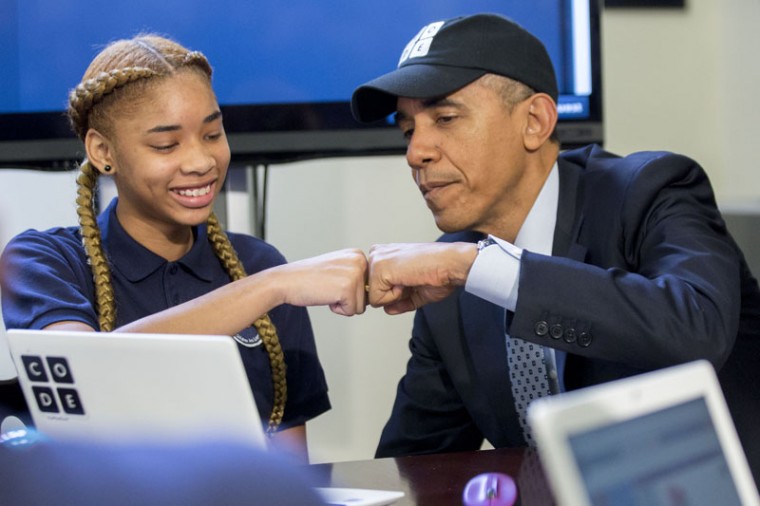 U.S. President Barack Obama fist-bumps middle-school student Adrianna Mitchell while participating in an “Hour of Code” event in the Eisenhower Executive Office Building next to the White House on December 8, 2014 in Washington, DC. The event is in honor of Computer Science Education Week. (Andrew Harrer-Pool/Getty Images) 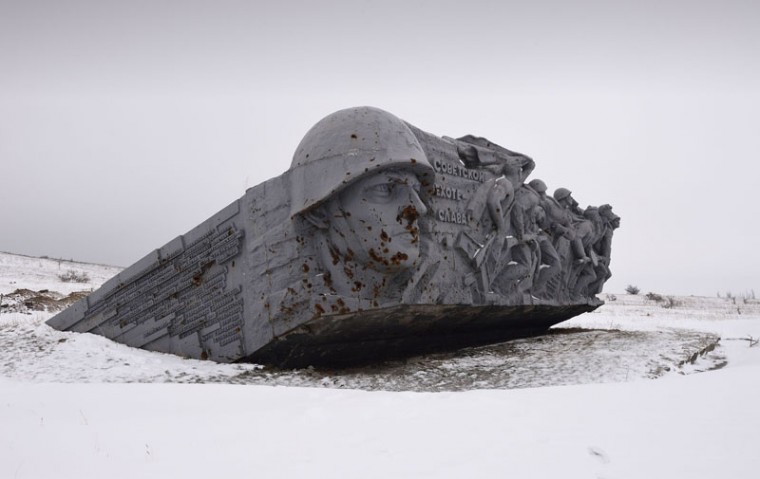 The recently damaged Savur Mogila monument to Red Army soldiers fallen during World War II near the eastern Ukrainian city of Snizhnee before a ceremony, organized by the Donestk People’s Republic (RDN), in memory of the pro-Russian rebels who have died during fighting against the Ukranian Army. (Eric Feferberg/AFP/Getty Images) 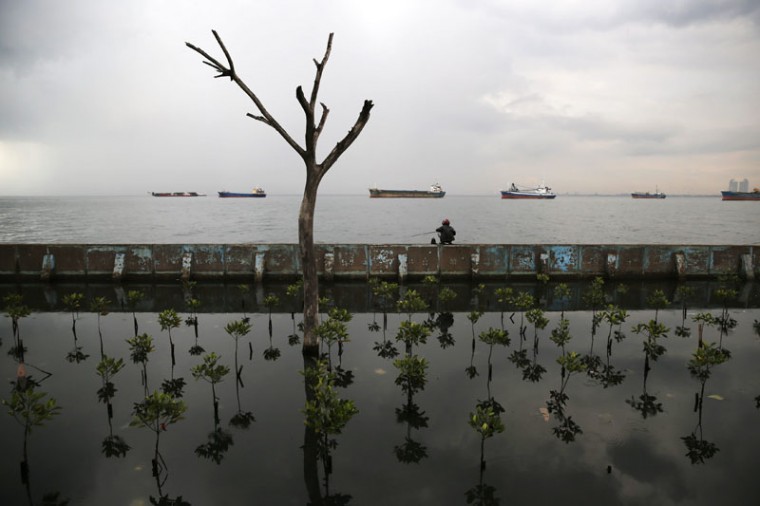 A man sits on top of a sea wall as he fishes at Muara Baru port in Jakarta, December 8, 2014. (Beawiharta/Reuters) 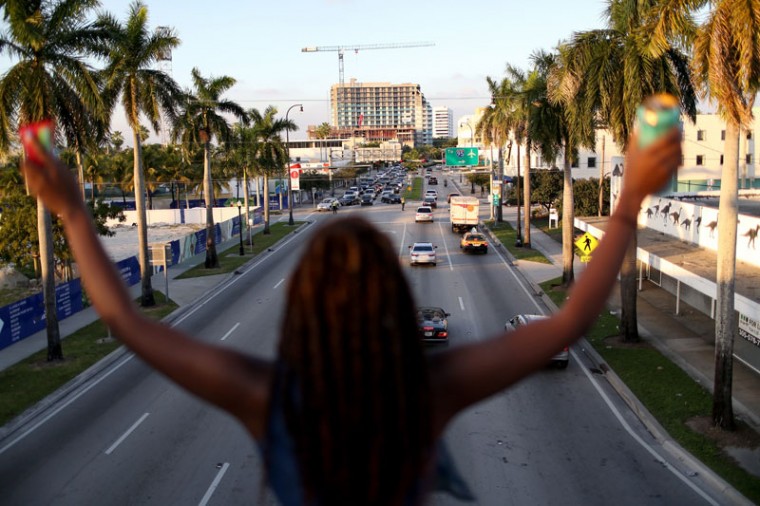 A demonstrator holds her arms up as she joins with others marching along Interstate 195 after police shut the road down on December 7, 2014 in Miami, Florida. The protest was one of many that have take place nationwide after grand juries investigating the deaths of Michael Brown in Ferguson, Missouri and Eric Garner in New York failed to indict the police officers involved in both incidents (Joe Raedle/Getty Images) 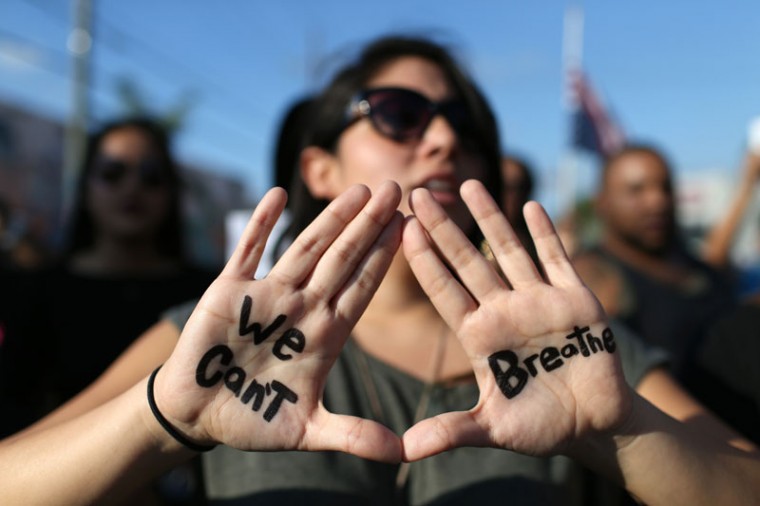 Demonstrators march through the Wynwood neighborhood to protest police abuse on December 7, 2014 in Miami, Florida. The protest was one of many that have take place nationwide after grand juries investigating the deaths of Michael Brown in Ferguson, Missouri and Eric Garner in New York failed to indict the police officers involved in both incidents (Joe Raedle/Getty Images) 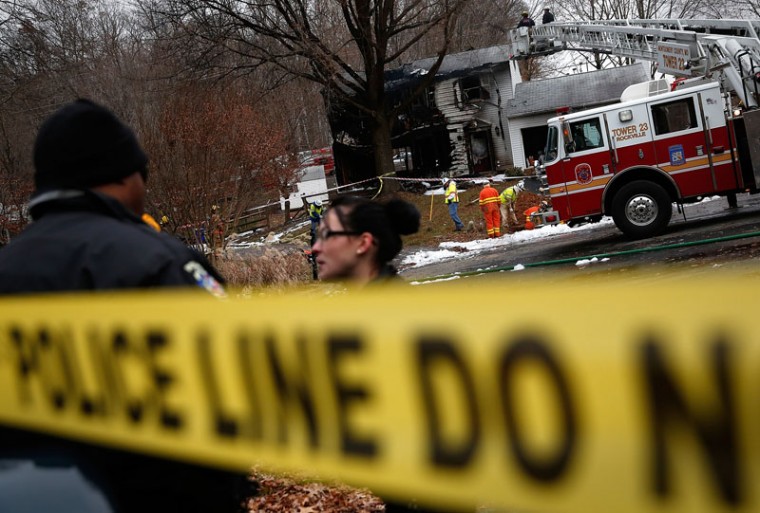 Utility workers and emergency personnel work near the site where a small plane crashed into a residential neighborhood December 8, 2014 in Gaithersburg, Maryland. The three occupants of the plane were killed in the crash, and investigators are searching for three people who are unaccounted for on the ground. (Win McNamee/Getty Images) 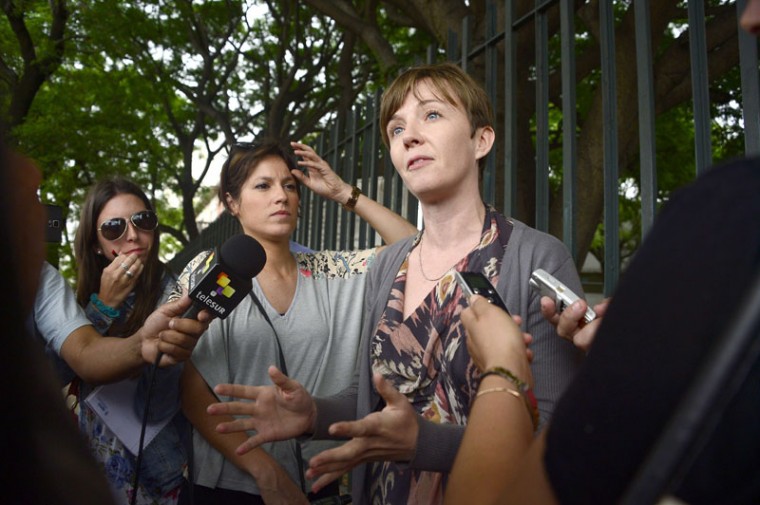 Cori Crider, lawyer of the Syrian national recently freed from Guantanamo prison Abu Wael Dhiab, speaks to the press outside of the Military Hospital in Montevideo on December 8, 2014. Six Guantanamo inmates transferred to Uruguay were to leave hospital in freedom after more than a decade in what one called the “black hole” of the US military prison. (Pablo Porciuncula/AFP/Getty Images) 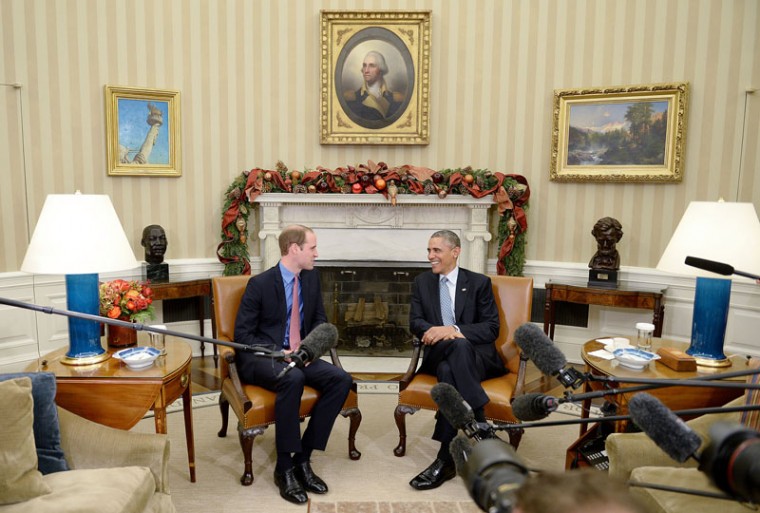 President Barack Obama meets with Prince William, the Duke of Cambridge, in the Oval Office of the White House on Dec. 8, 2014 in Washington, D.C. This is Britain’s Prince William and Princess Kate’s first official visit to the U.S. (Olivier Douliery/Abaca Press/TNS) 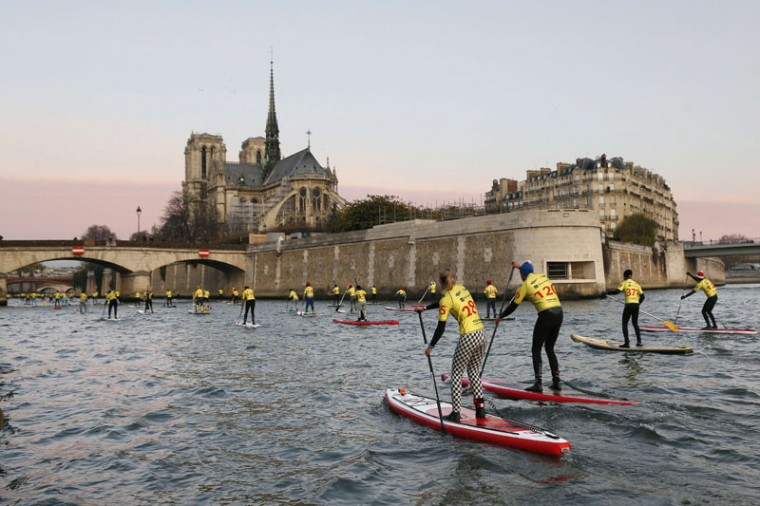 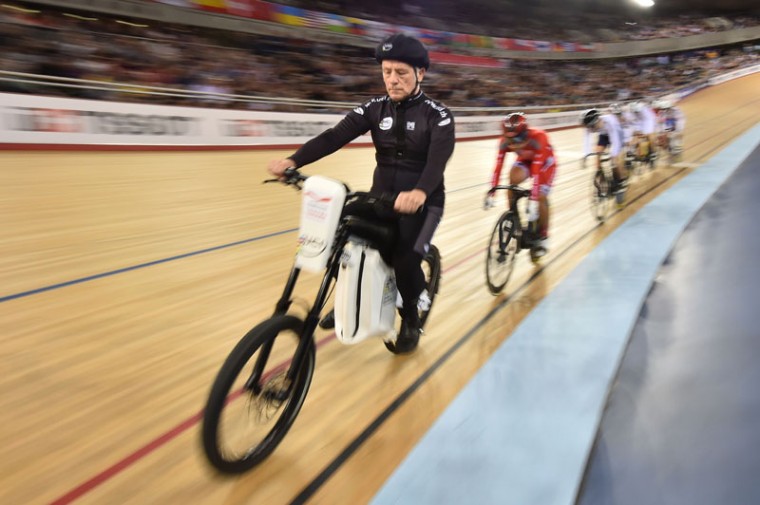 The derny bike (L) leads the pack during the women’s keirin final at the UCI Track Cycling World Cup at the Lee Valley Velopark in east London. (Ben Stansall/AFP/Getty Images) 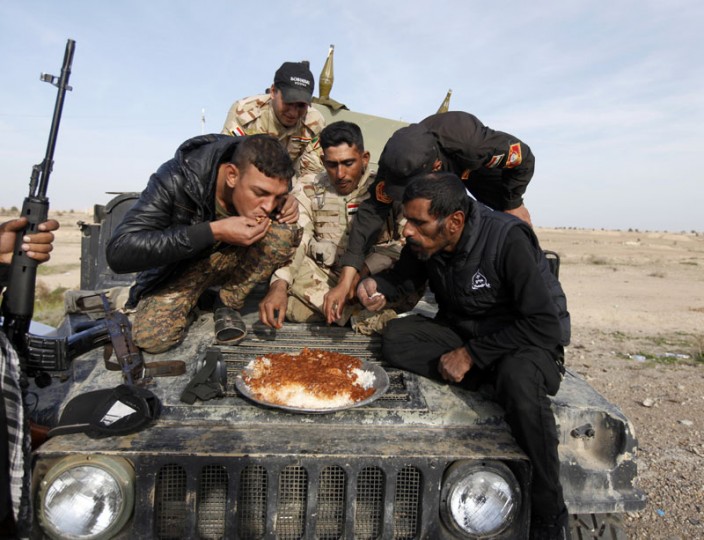 Members of Iraqi security forces and Shiite fighters eat on their vehicle on the outskirts of Baiji, north of Baghdad December 8, 2014. (Ahmed Saad/Reuters) 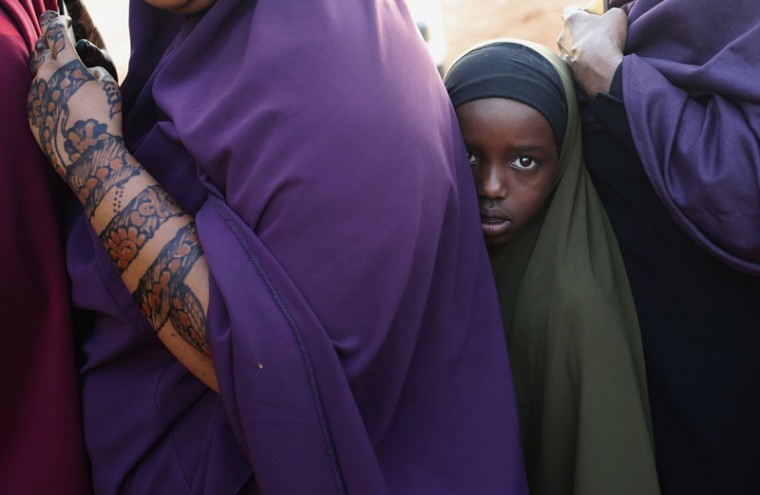 A girl stands in line in front of a bus with other passengers traveling to Nairobi, as they wait to be searched for weapons by Kenyan police, in the town of Mandera at the Kenya-Somalia border December 8, 2014. (Goran Tomasevic/Reuters) 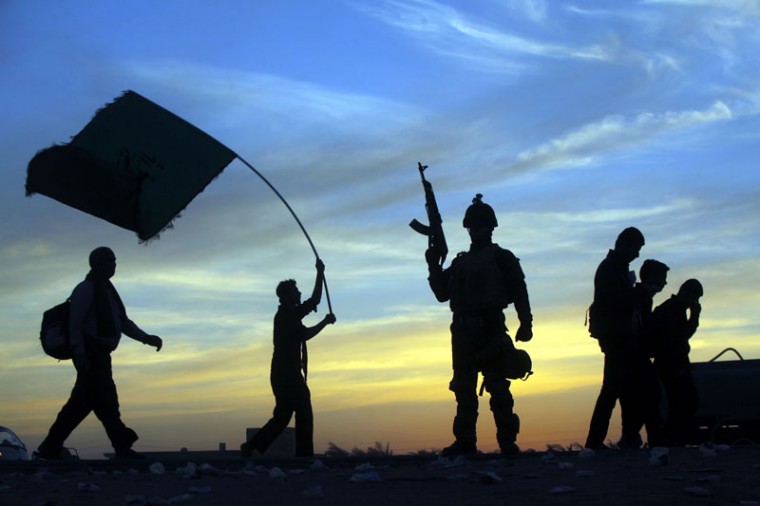 Shi’ite Muslim pilgrims walk to the holy city of Kerbala, ahead of the holy Shi’ite ritual of Arbaeen, in Najaf, December 8, 2014. Arbaeen falls 40 days after the holy day of Ashura. (Alaa Al-Marjani/Reuters) 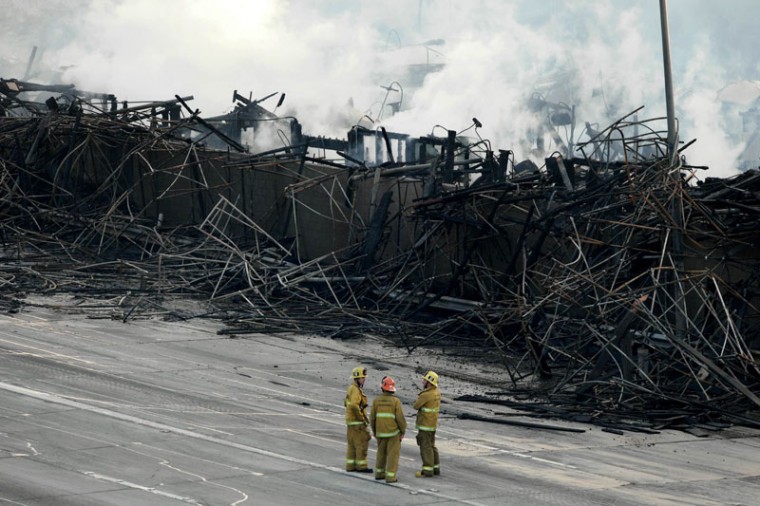 Firefighters stand on lanes of the 110 freeway near smoldering hot spots of a large fire that consumed an apartment building that was under construction in Los Angeles, California December 8, 2014. The blaze in downtown Los Angeles early on Monday shut down two major freeways, the Los Angeles Fire Department and California Highway Patrol said. The fire was extinguished, but firefighters were still on the scene monitoring hot spots. There were no reports of injuries or fatalities in the fire. (Jonathan Alcorn/Reuters) 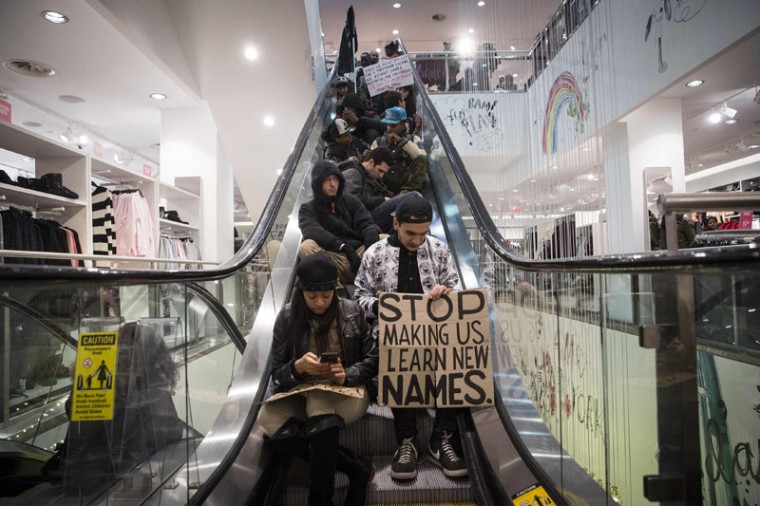 Protesters hold a sit-in on escalators in the 34th Street H&M store, during a march against police violence, in New York. Protesters in New York and other cities staged a fifth night of rallies on Sunday, denouncing use of deadly force by police against minorities. This week’s wave of angry but largely peaceful protests began Wednesday when a New York grand jury declined to bring charges against white police officer Daniel Pantaleo in the chokehold death of Garner, a black 43-year-old father of six. (Andrew Kelly/Reuters) 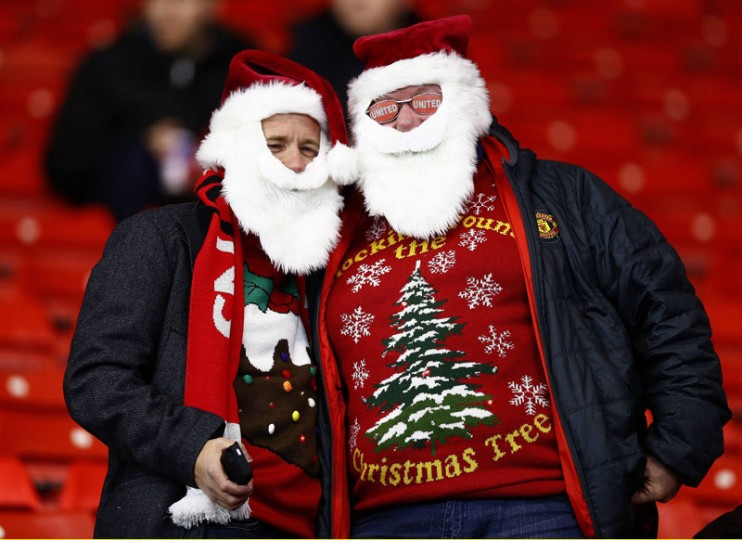