Llamas are seen in front of the Inca citadel of Machu Picchu in Cusco December 2, 2014. Machu Picchu, a UNESCO World Heritage Site, is Peru’s top tourist attraction, with the government limiting tourists to 2,500 per day due to safety reasons and concerns over the preservation of the ruins. (Enrique Castro-Mendivil/Reuters photo) 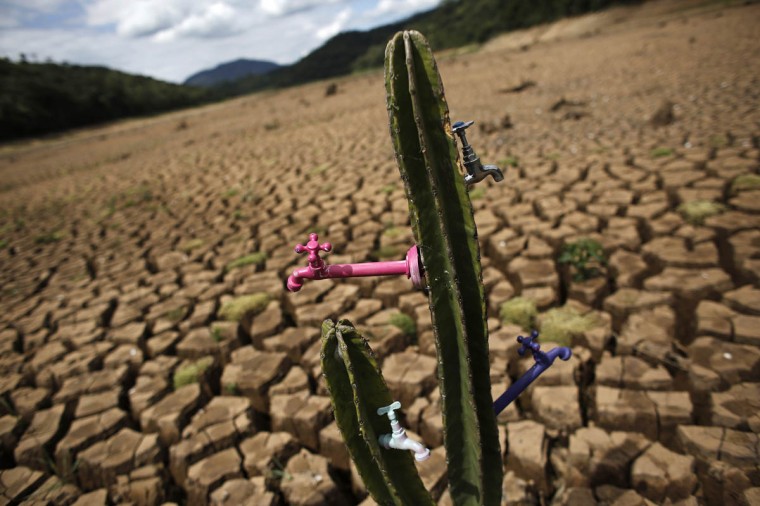 A drought-related cactus installation called “Desert of Cantareira” by Brazilian artist and activist Mundano is seen at Atibainha dam, part of the Cantareira reservoir, during a drought in Nazare Paulista, Sao Paulo December 2, 2014. Sao Paulo, Brazil’s drought-hit megacity of 20 million, has about two months of guaranteed water supply remaining as it taps into the second of three emergency reserves, officials say. (Nacho Doce/Reuters photo) 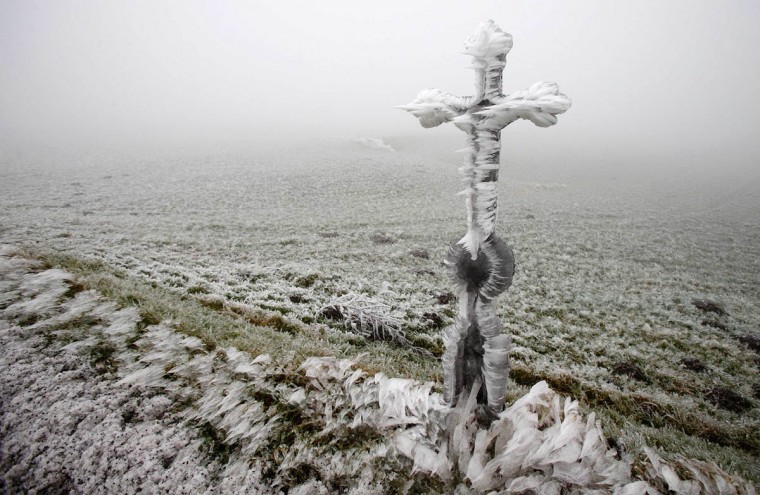 A roadside shrine is covered with ice Himberg in northern Austria, December 3, 2014. Freezing fog and rain has covered parts of the region with ice, causing blocked roads due to fallen trees and closed schools for security reasons, local media report. (Heinz-Peter Bader/Reuters photo) 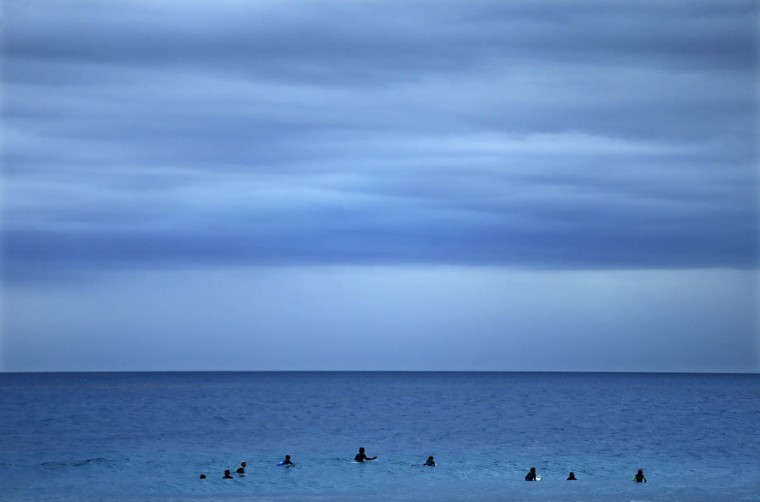 Surfers offshore in Cardiff, California wait for the swell from a storm bringing heavy rain to Southern California. A major Pacific storm hammered California on Tuesday, bringing desperately needed rain to a drought-parched state that has seen very little precipitation over the past year but also carrying the threat of flooding and mudslides. (Mike Blake/Reuters photo) 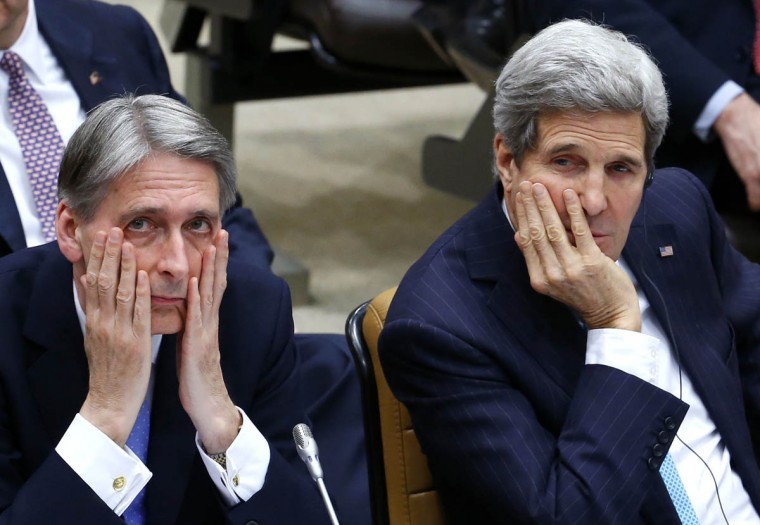 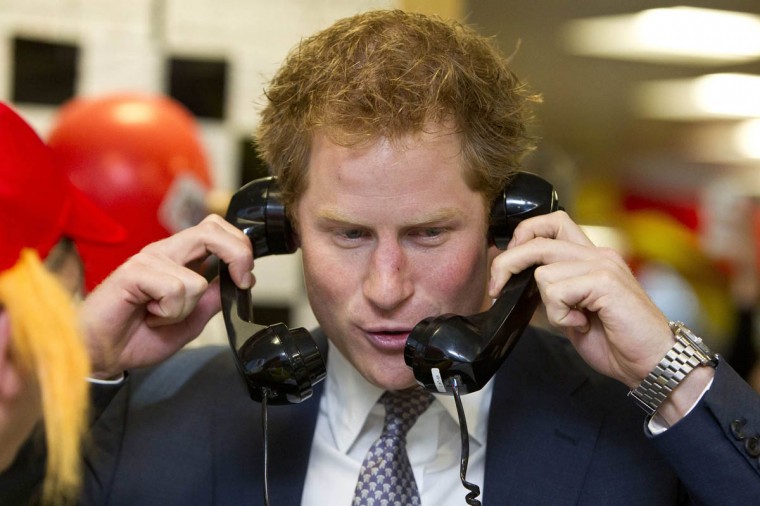 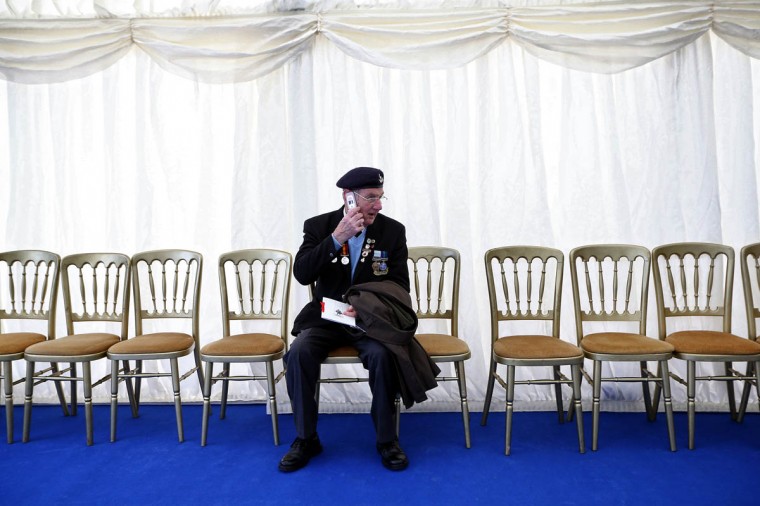 A veteran chats on his phone during the unveiling ceremony of London’s first public memorial to the Korean War on December 3, 2014 in London, England. The ceremony was attended by 300 members of the British Korean’s Veterans Association and was led by the Duke of Gloucester. (Carl Court/Getty Images) 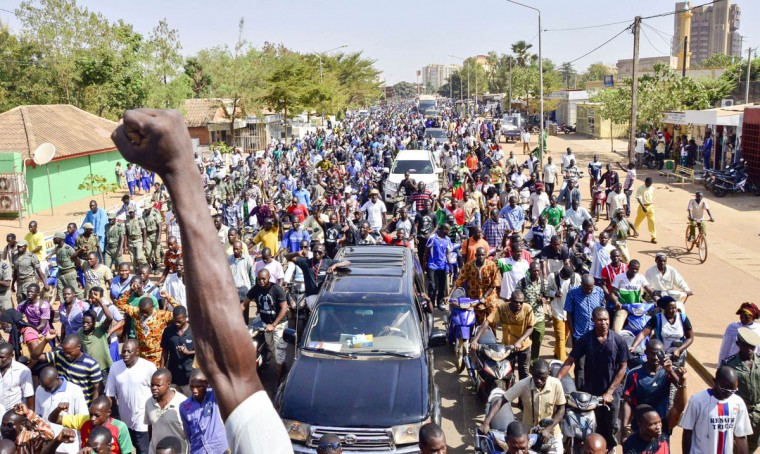 A man holds up his fist as people attend the official funeral of “martyrs” of the uprising that ousted president Blaise Compaore, at Revolution Square in Ouagadougou. Tens of thousands of people turned out in Burkina Faso’s capital where six coffins draped in the red, green and yellow of the national flag were brought for the ceremony. In all, at least 24 people were killed during demonstrations on October 30 and 31 against a bid by Compaore to extend his 27-year rule, according to an official inquiry. (Ahmed Ouoba/Getty Images) 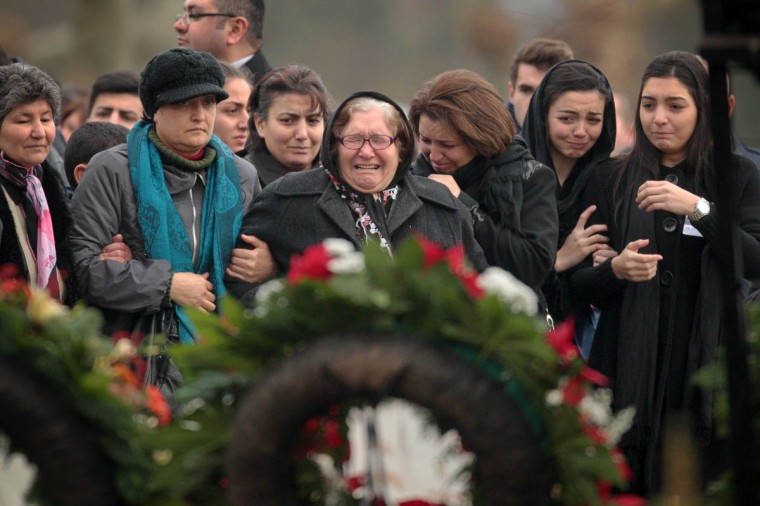 Mourners cry as they stand in front of the grave of Tugce Albayrak during her burial on December 3, 2014 at the cemetery in Bad Soden-Salmünster, western Germany. Hundreds of mourners attended the burial in Bad Soden-Salmünster and the funeral service in Waechtersbach for the young woman of Turkish origin who was attacked and later died after confronting a male group harrassing two teenage girls, sparking public outrage. (Fredrik Von Erichsen/Getty Images) 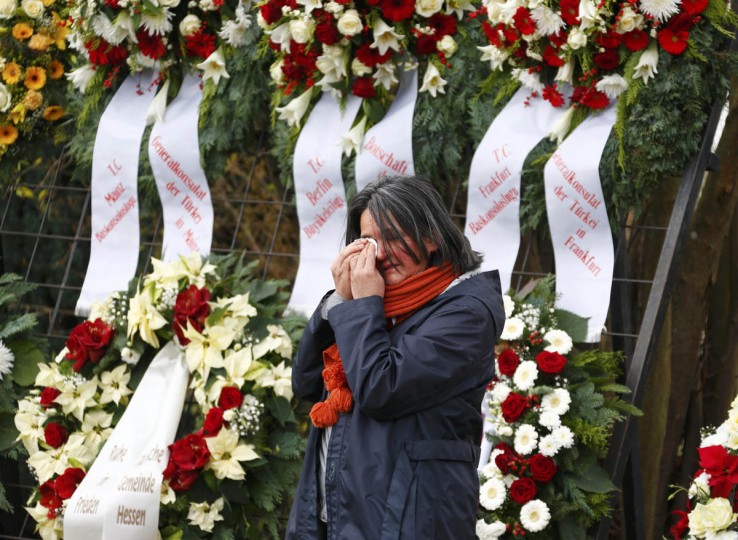 A mourner cries at the cemetry before the burial of late student Tugce Albayrak in Bad Soden-Salmuenster, December 3, 2014. Tugce Albayrak, 23, was beaten up in mid-November in front of a fast food in Offenbach near Frankfurt, as she tried to defend two girls. She was in coma since then and died on November 28 when her family allowed doctors to switch off her life support, on the day of her birthday. (Ralph Orlowski/Reuters photo) 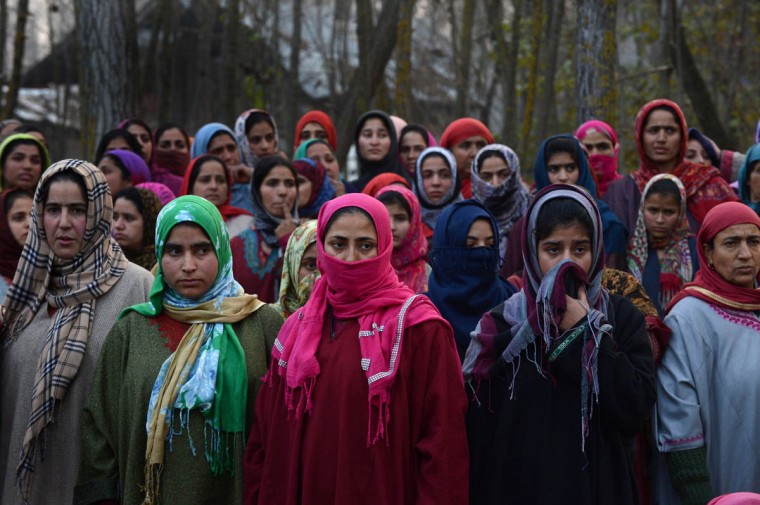 Kashmiri villagers watch during the funeral of Central Reserve Police Force (CRPF) trooper, Mohammad Shafi Bhat at Ama Buran Pattan, north of Srinagar on December 3, 2014. Shafi was among thirteen paramilitary troopers who died in a gunbattle with Maoists in a deep forest of Sukma region of Chhattisgarh. Maoist rebels killed 13 police and wounded another 12 in an ambush in a remote part of central India on December 1. The insurgency is believed to have cost tens of thousands of lives, with much action focused around the insurgent-dominated, so-called “Red Corridor” stretching through central and eastern India.(Tauseef Mustafa/Getty Images) 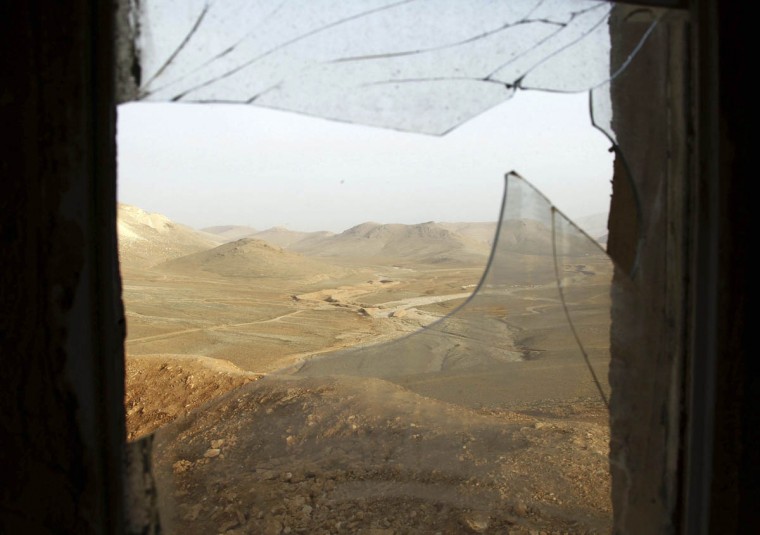 A window with broken glass overlooks the Lebanese-Syrian border as seen from a Lebanese military post, near the site of an ambush where gunmen killed at least six Lebanese soldiers, in the mountainous border town of Ras Baalbek December 3, 2014. Gunmen killed at least six Lebanese soldiers when they attacked an army patrol near the border with Syria on Tuesday, the army and a Lebanese security source said. The source said the gunmen crossed from Syria to the mountainous border town of Ras Baalbek after dark and ambushed the patrol. Clashes between gunmen and a special army unit erupted after the attack and the army was able to retrieve the bodies of six of its soldiers. Picture taken from the Lebanese side of the Lebanese-Syrian border. (Mohamed Azakir/Reuters photo) 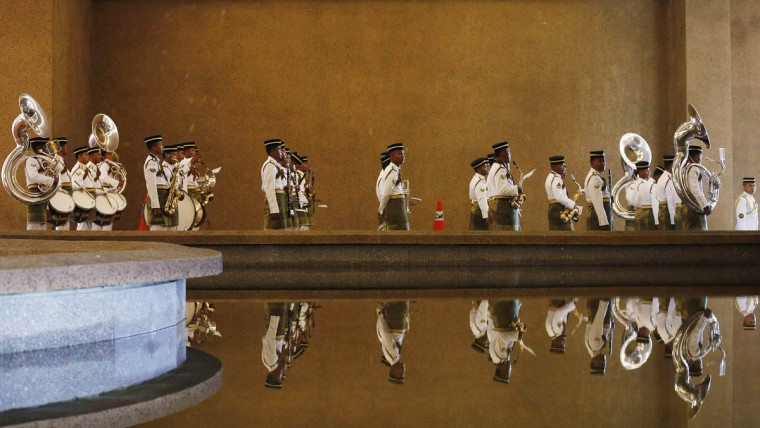 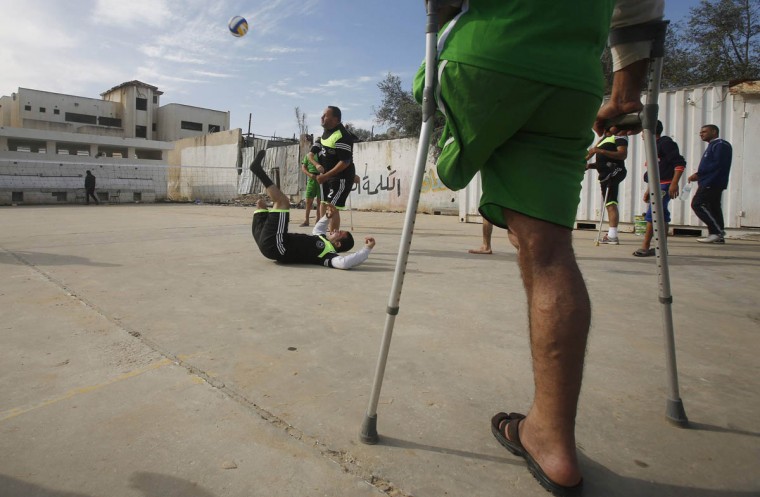 Disabled Palestinians take part in a sitting volleyball training session in the east of Gaza City, December 3, 2014. The participants mostly lost their limbs and were injured in past rounds of conflict with Israel, according to the supervisors of the event, which was organised by the General Union of Disabled Palestinians. (Suhaib Salem/Reuters photo) 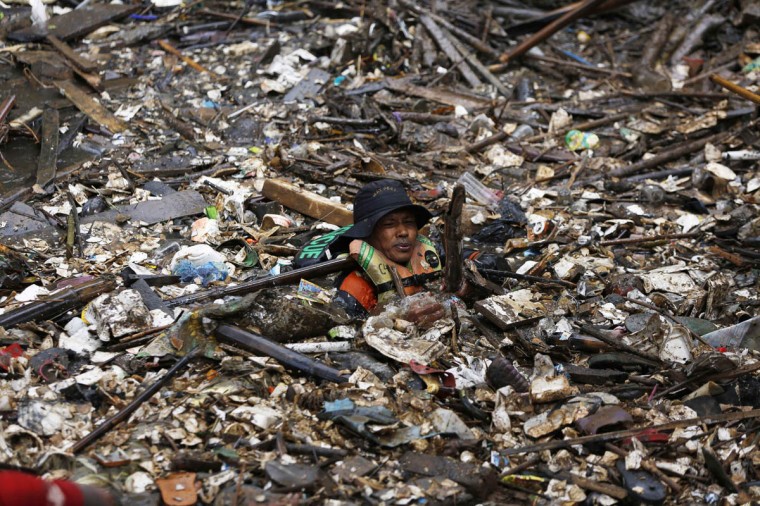 A volunteer clears rubbish from the Ciliwung River in the Jatinegara district of Jakarta, December 3, 2014. More than 1,000 soldiers and volunteers cleared 80 tons of rubbish after flooding hit parts of the capital last week, local media reported. (Beawiharta/Reuters photo) 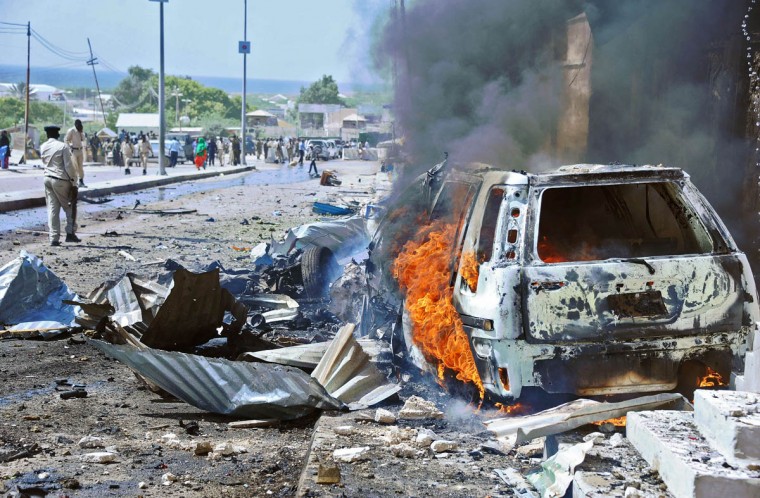 A car burns following a blast near the heavily fortified gates of the airport in Mogadishu on December 3, 2014. At least four people were killed in Somalia’s capital Mogadishu when a suicide bomber rammed a car packed with explosives into a UN convoy, police said. The convoy of armoured vehicles were reportedly ferrying staff between Mogadishu’s heavily-fortified airport and a protected UN base in the city when it was hit close to the airport gate. (Mohamed Abdiwahab/Getty Images) 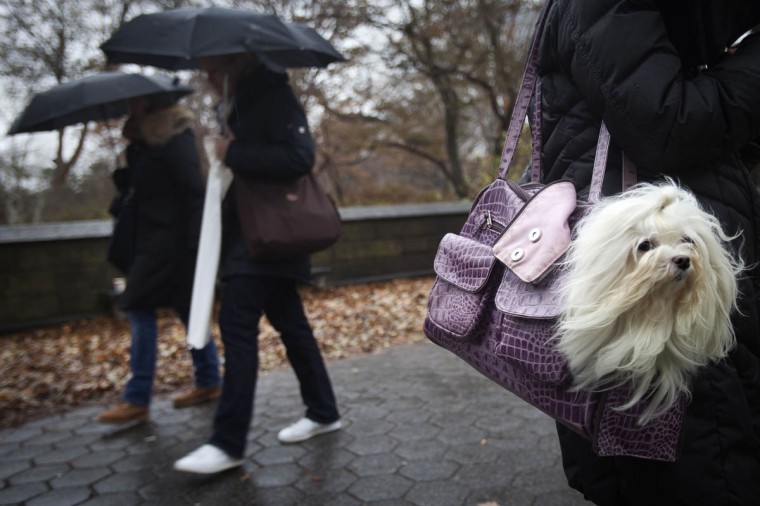 Emma the Maltese’s fur blows in the wind as she rides in her owner’s purse on 5th Avenue at Central Park in New York. (Carlo Allegri/Reuters photo) 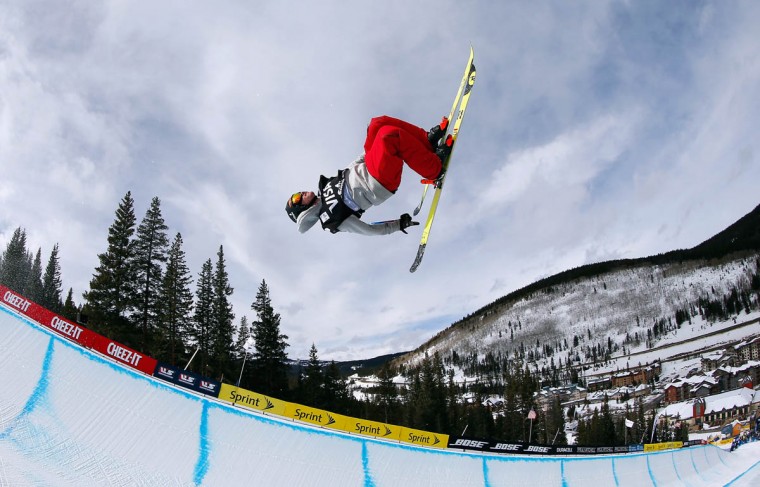 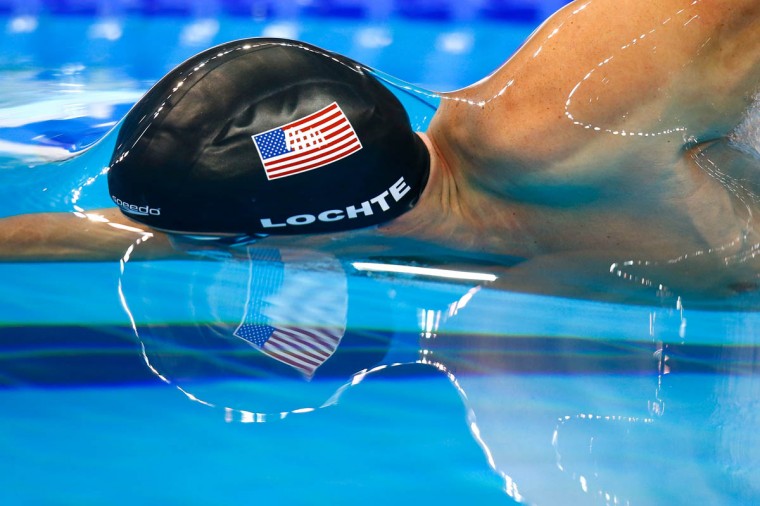 Ryan Lochte of USA competes in the Men’s 200m Freestyle Final on day one of the 12th FINA World Swimming Championships (25m) at the Hamad Aquatic Centre on December 3, 2014 in Doha, Qatar. (Clive Rose/Getty Images) 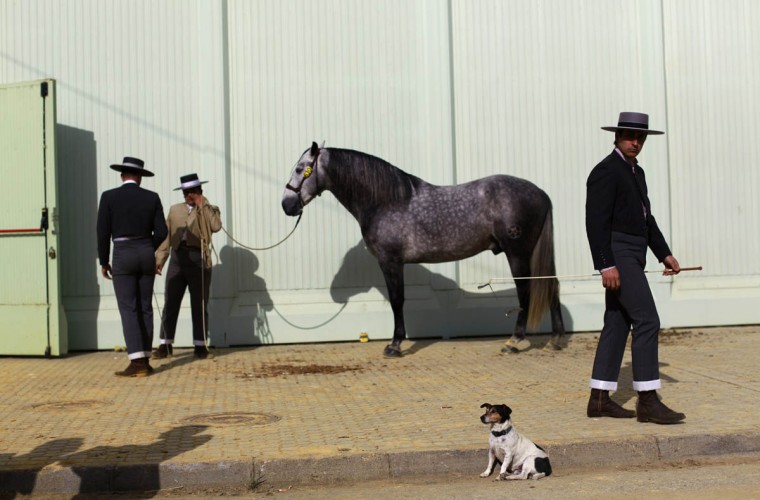 Andalusian horsemen wait before taking part in a morphological contest for colts of three years during the Sicab International Pre Horse Fair in the Andalusian capital of Seville December 3, 2014. The show runs till December 7 and is dedicated in full and exclusively to the purebred Spanish horse, to offer visitors a wide range of examples of breed versatility for their enjoyment. (Marcelo del Pozo/Reuters photo) 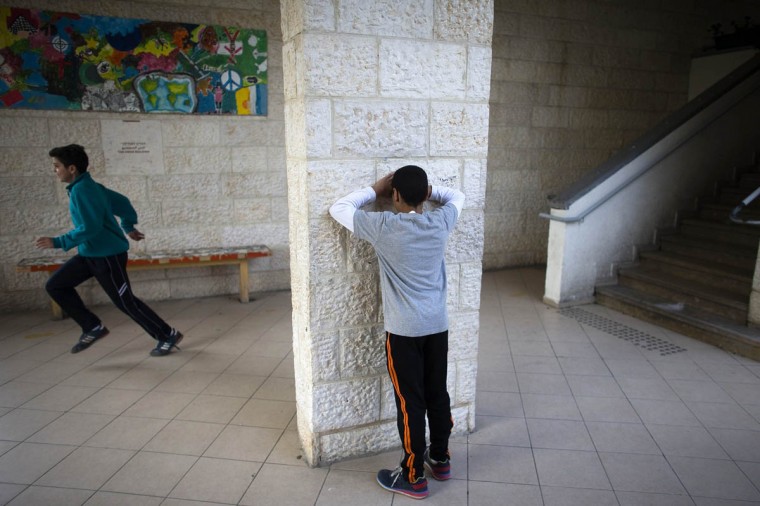 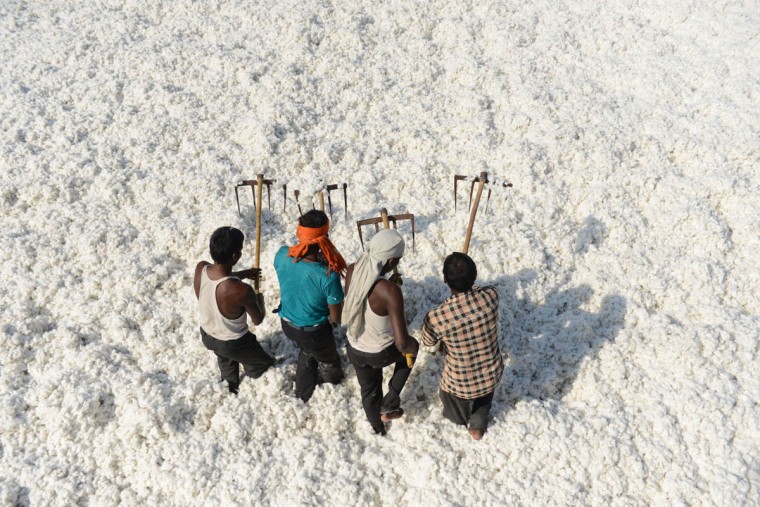 Indian labourers work at a cotton processing and packaging industry in Kadi, also known as ‘Cotton City of India’, some 50 kms from Ahmedabad on December 3, 2014. Farmers associated with cotton crops are protesting in many parts of Gujarat state demanding that the central government raise the minimum support price (MSP) to overcome the loss owing to climate change and rise in the prices of other products. (Sam Panthaky/Getty Images) 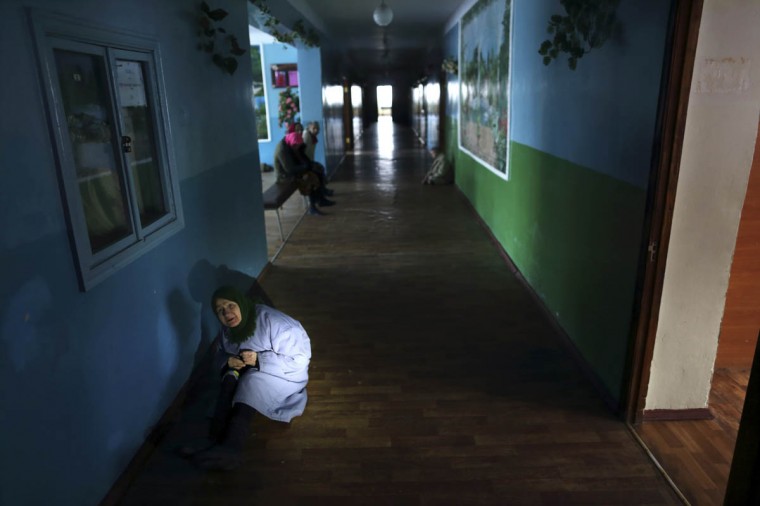 Patients are seen in a hallway at the regional psycho-neurological hospital on the outskirts of Slovyanoserbsk, in a territory controlled by “Lugansk People’s Republic” (LPR), eastern Ukraine, December 1, 2014. The Psycho-Neurological Hospital outside the village of Slovyanoserbsk is caught in the crossfire in separatist-held territory about 30 km (20 miles) northwest of the rebel stronghold of Luhansk and near the frontline. Medical workers say the head of the hospital was killed by a shell in Luhansk and about half the 180 staff have fled. There were 400 patients when fighting began, they say. (Antonio Bronic/Reuters photo) 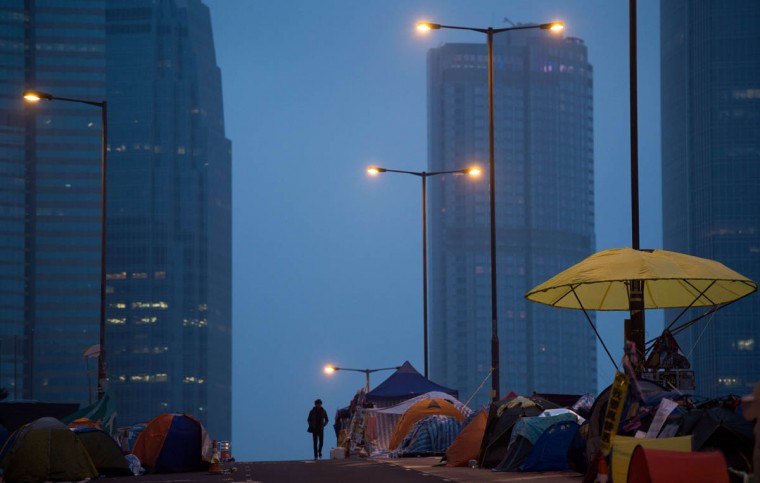 A man walks on a flyover at the pro-democracy movement’s main protest site in the Admiralty district of Hong Kong early on December 3, 2014. The original founders of Hong Kong’s pro-democracy Occupy movement tearfully announced on December 2 they would “surrender” by turning themselves in to police and urged protesters on the streets to retreat. (Johannes Eisele/Getty Images)