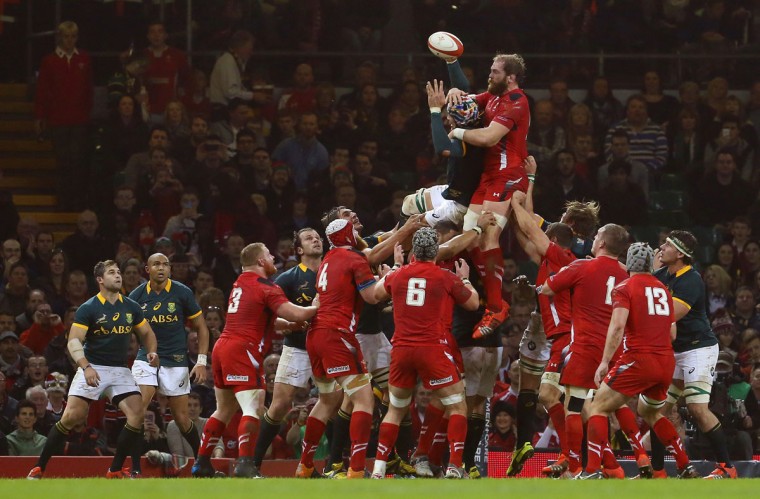 South Africa’s Victor Matfield (up left) and Wales’ Alun Wyn Jones jump for the ball in the line out during the Autumn International rugby union Test match at the Millennium Stadium in Cardiff, south Wales, on November 29, 2014. (GEOFF CADDICK/AFP/Getty Images) 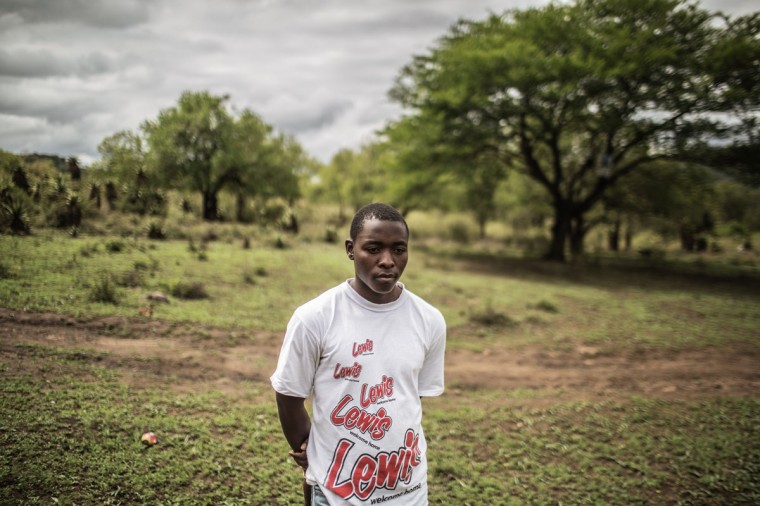 A South African boy from a rural area in the KwaZulu Natal province waits on the road to be picked up by health workers working with Doctors Without Borders (MSF) to undergo medical circumcision as a form of HIV prevention in the Mbongolwane district. (GIANLUIGI GUERCIA/AFP/Getty Images) 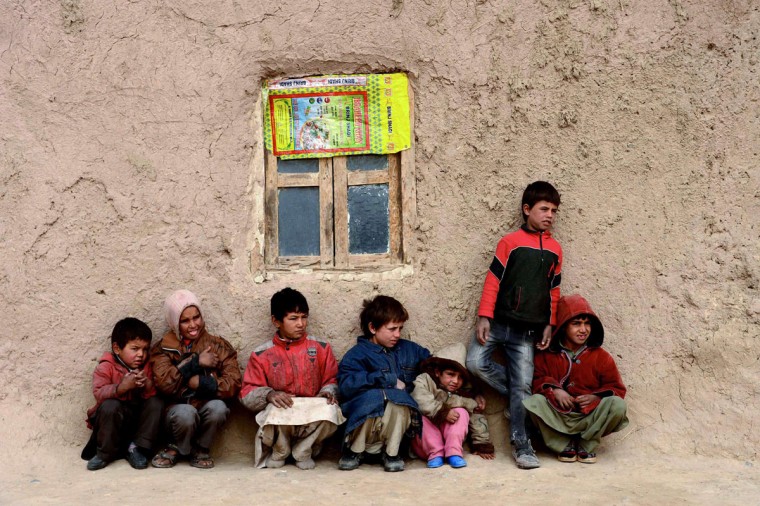 Afghan children sit near their home in Herat on November 30, 2014. As winter sets in across Central Asia, many Afghans struggle to provide adequate food and shelter for their families. (Aref Karimi/AFP/Getty Images) 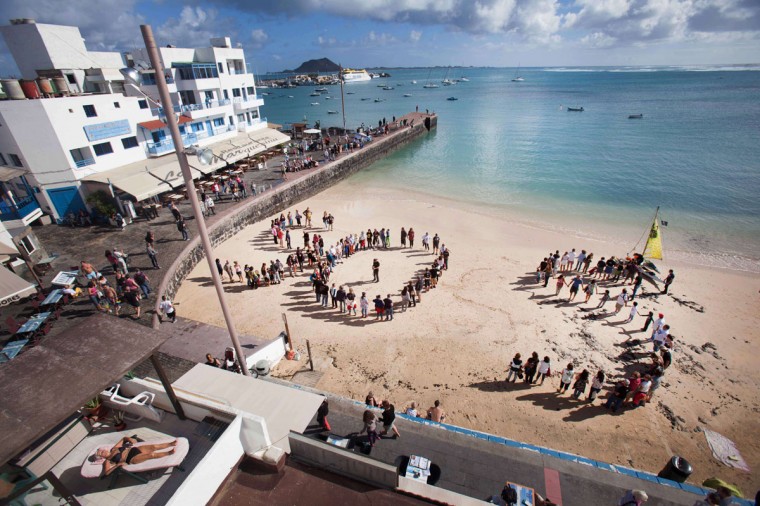 People form a giant S.O.S. on a beach as they protest against oil exploration being carried off the coast of the Canary Islands, at a beach of Corralejo, on the Spanish Canary island of Fuerteventura on November 30, 2014. (DESIREE MARTIN/AFP/Getty Images) 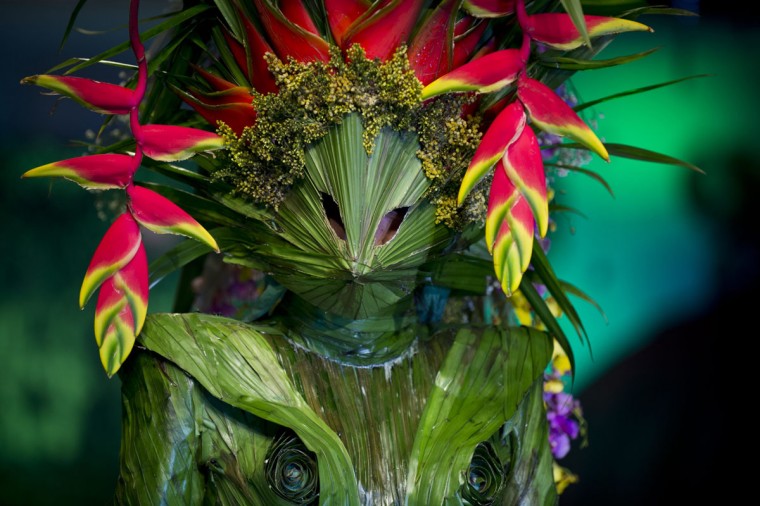 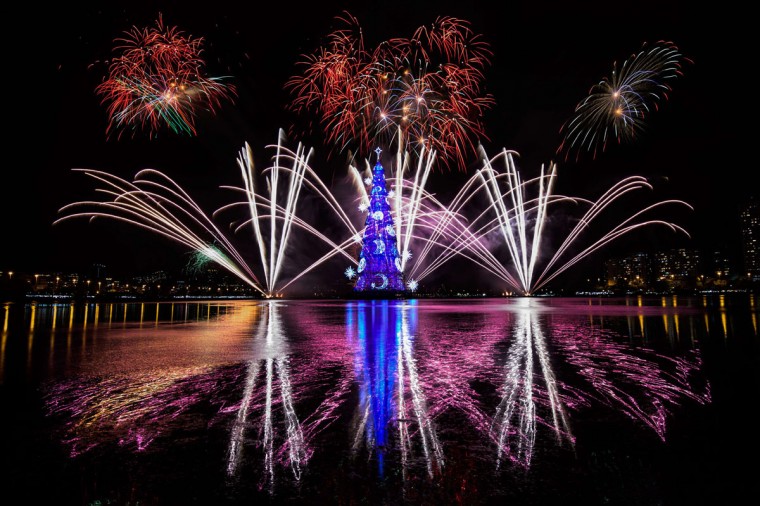 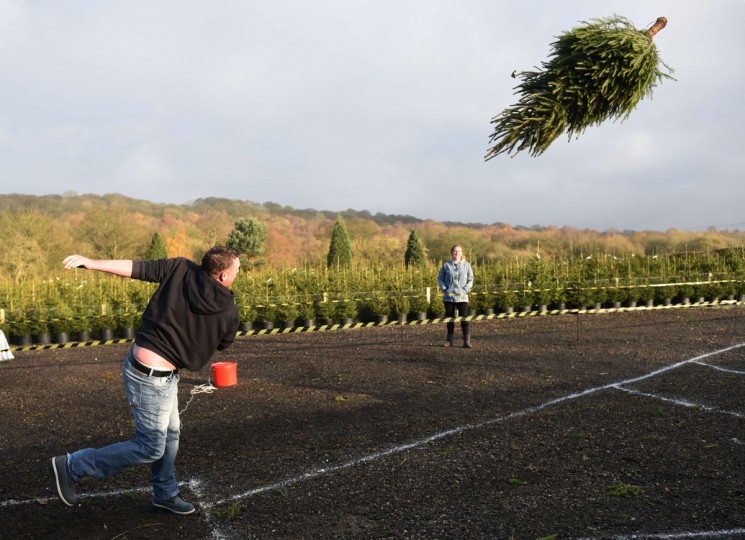 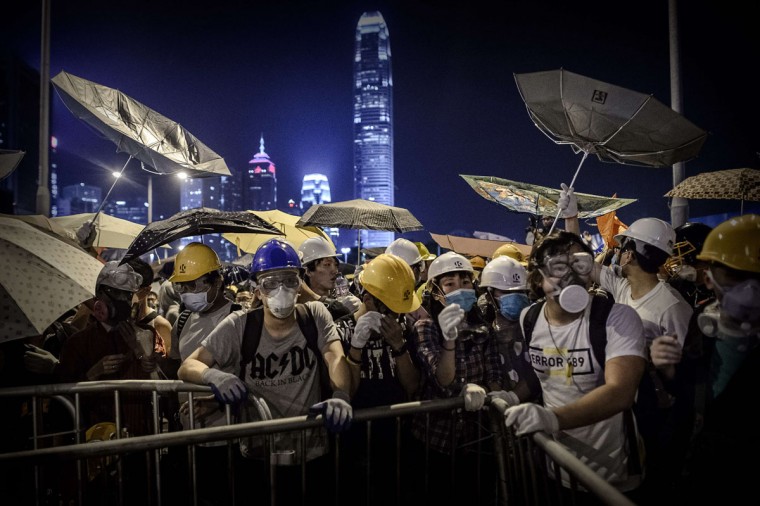 Pro-democracy protesters face police forces during clashes at a pro-democracy rally in the Admiralty district of Hong Kong on November 30, 2014. (PHILIPPE LOPEZ/AFP/Getty Images) 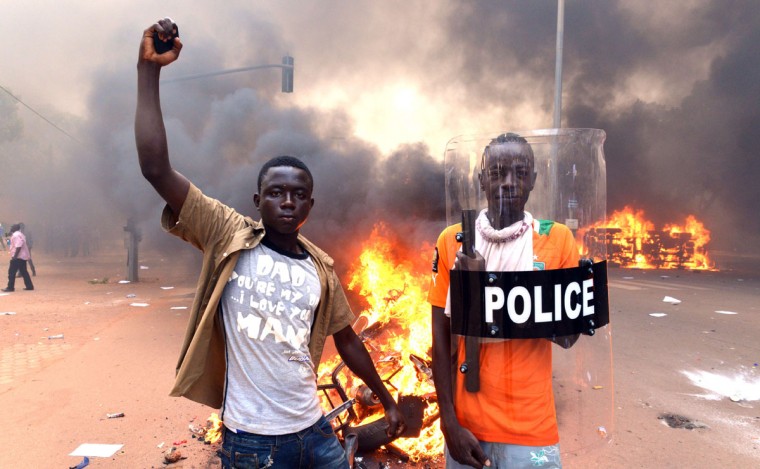 Protesters pose with a police shield outside the parliament in Ouagadougou on October 30, 2014 as cars and documents burn outside. (ISSOUF SANOGO/AFP/Getty Images) 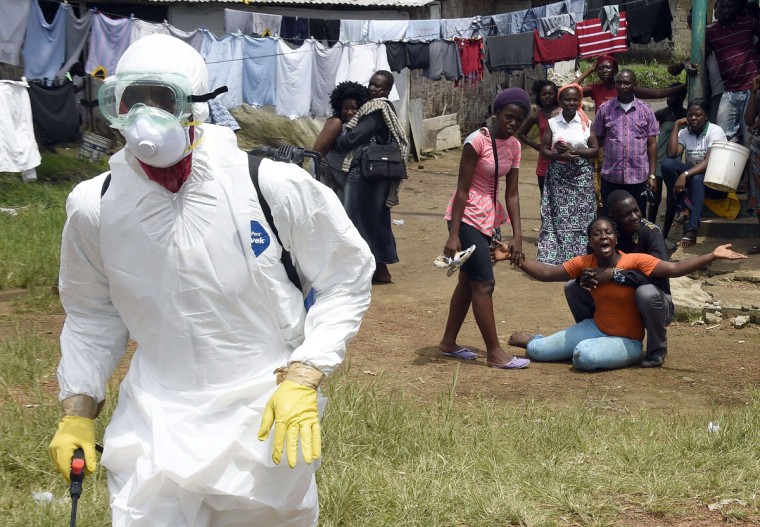 People look on as a woman reacts after her husband is suspected of dying from the Ebola virus, in the Liberian capital Monrovia, on October 4, 2014. (PASCAL GUYOT/AFP/Getty Images) 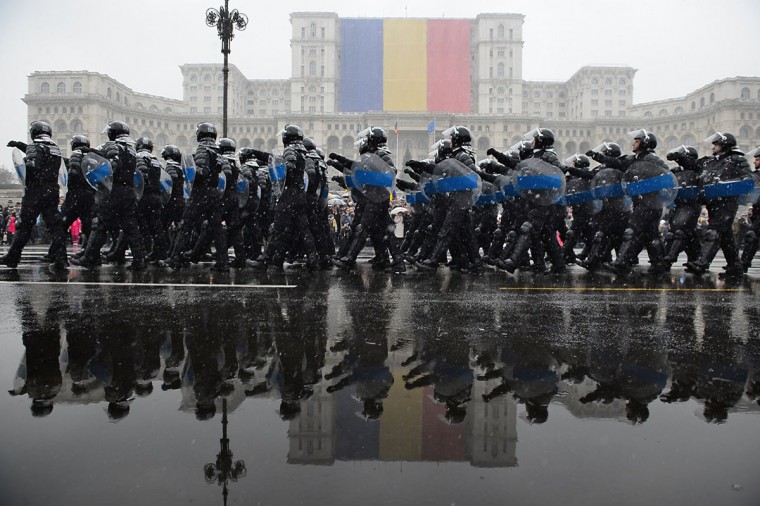 Romanian gendarmes parade in front of the Parliament building in Bucharest during festivities to celebrate the National Day of Romania on December 1, 2014. (DANIEL MIHAILESCU/AFP/Getty Images) 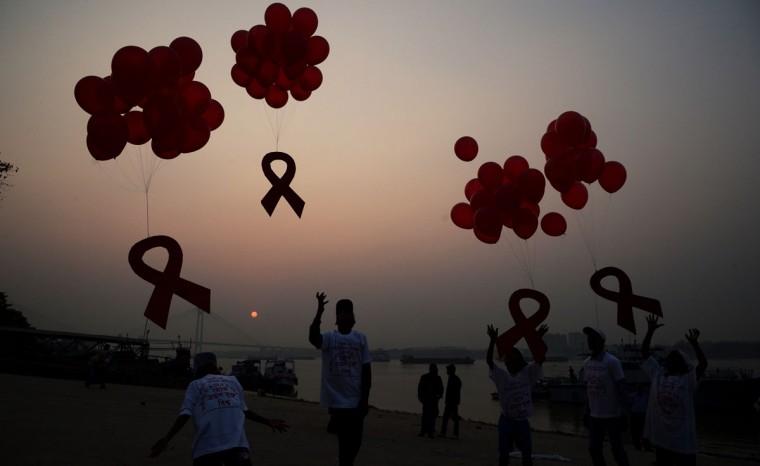 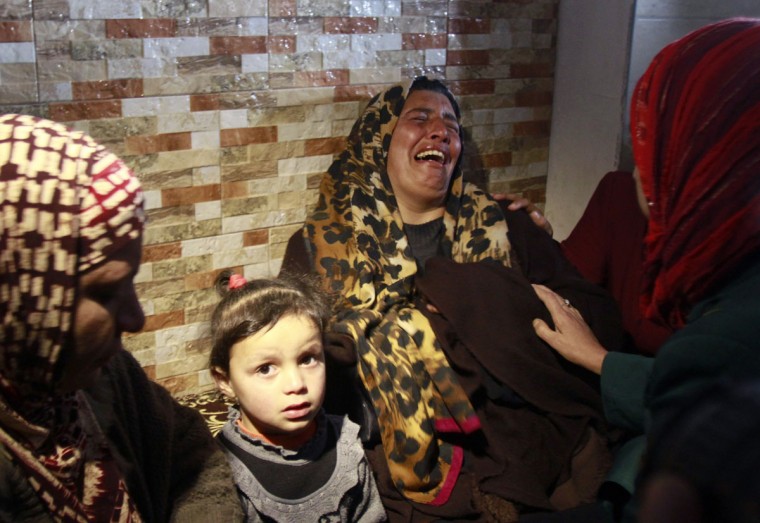 The mother of Amal Jihad Taqatqa, a Palestinian woman from Beit Fajjar near the West Bank city of Bethlehem, cries in her home on December 1, 2014, after her daughter attacked an Israeli civilian in the Gush Etzion settlement bloc, south of Bethlehem. The Israeli army shot and wounded Amal Jihad Taqatqa after she stabbed an Israeli civilian in the Jewish settlement bloc in the southern West Bank, the military said. The attack was the first by a Palestinian woman in a wave of unrest in Israel and the occupied territories, and comes as tensions run high particularly in Jerusalem and nearby areas of the West Bank. (MUSA AL-SHAER/AFP/Getty Images) 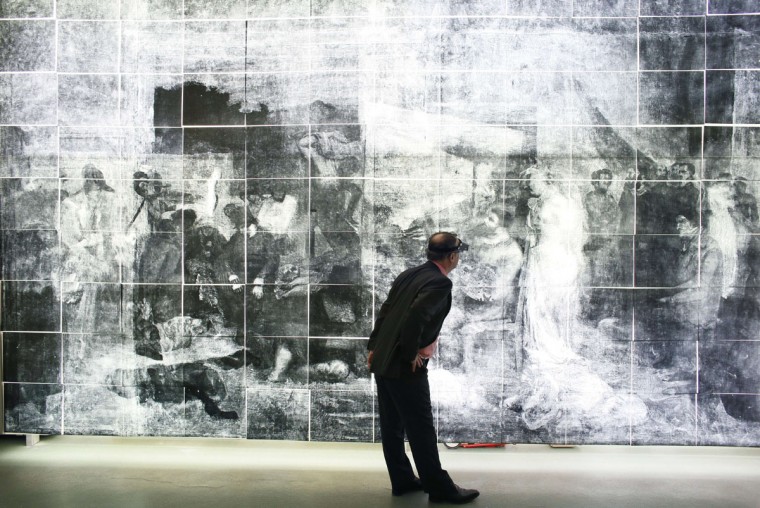 Head curator in charged of painting studies at the French Museums Research and Restoration centre (C2RMF) Bruno Mottin looks at a full-size X-ray of a painting ‘L’Atelier du Peintre’ (‘The Artist’s studio’) by late French artist Gustave Courbet prior to restore it, on December 1, 2014 at the Louvre Museum in Paris. (PATRICK KOVARIK/AFP/Getty Images) 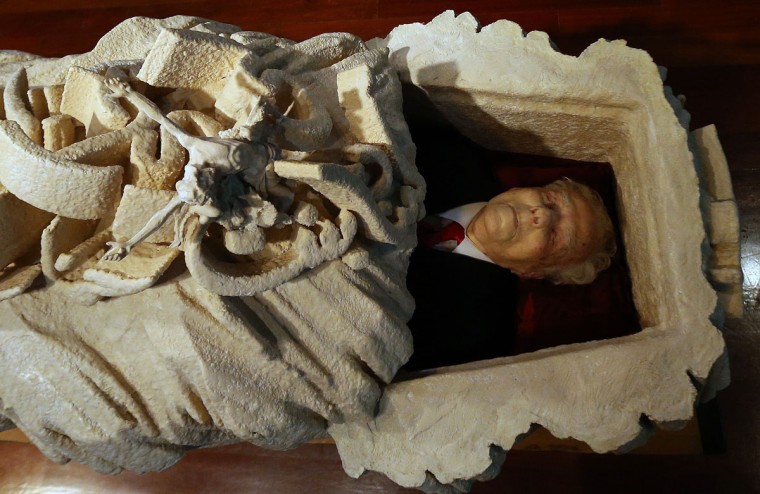 Lebanese Poet Said Akl (Aql) rests inside a cedar tree and Lebanese rock sarcophagus, designed by Lebanese sculptor and poet Rudy Rahme, at Notre Dame University NDU in Zouk Mosbeh north of Beirut on December 1, 2014. Akl passed away in Beirut on November 28, 2014 at the age of 102. (JOSEPH EID/AFP/Getty Images) 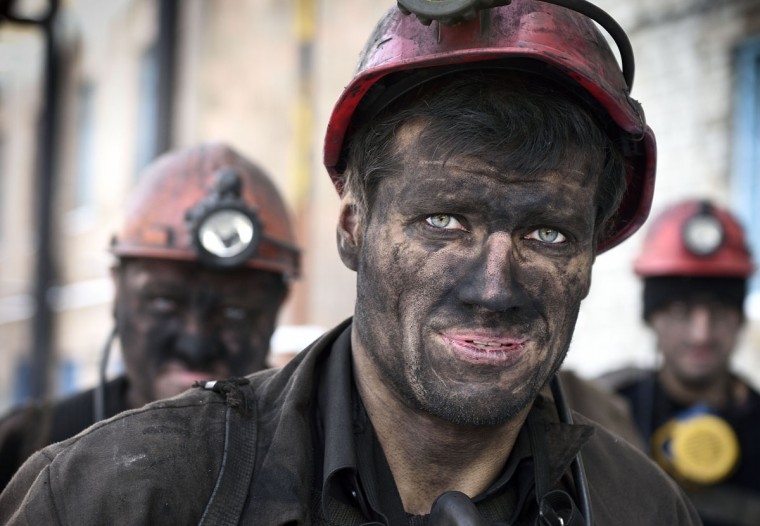 Miners return from their shift at the Kalinina coal mine in the eastern Ukrainian city of Donetsk, controlled by pro-Russian rebels on December 1, 2014. (ERIC FEFERBERG/AFP/Getty Images) 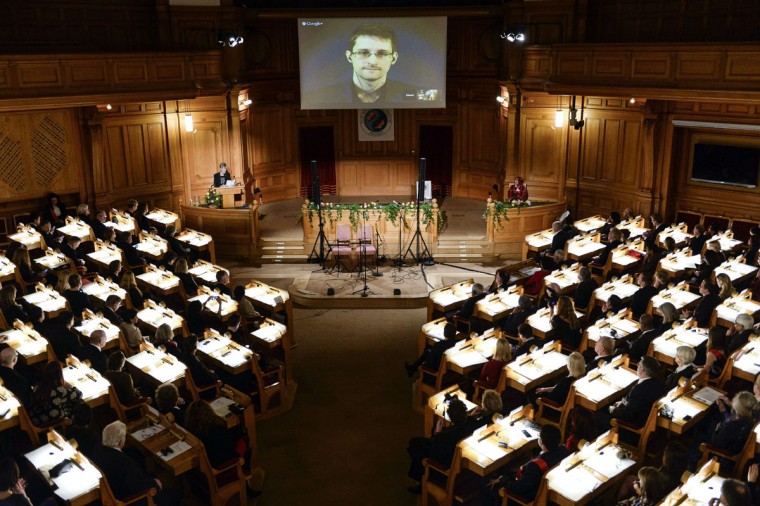 Fugitive US intelligence leaker Edward Snowden is shown on a livestream from Moscow during the Right Livelihood Award ceremony at the Swedish Parliament, in Stockholm, on December 1, 2014. Snowden was awarded the Right Livelihood Honorary Award ‘for his courage and skill in revealing the unprecedented extent of state surveillance violating basic democratic processes and constitutional rights. The Right Livelihood Award was founded by journalist and professional philatelist Jakob von Uexkull in 1980. (PONTUS LUNDAHL/AFP/Getty Images)