Hollins Market, which dates back to 1846, is the oldest of the surviving five neighborhood public markets in Baltimore. It is also the least changed. The two-story brick structure and the adjoining long shed that run along Hollins Street betweenSouth Arlington and North Carrollton Avenues were built in 1877. The old-fashioned market is a stone’s throw from H.L. Mencken’s house near Union Square. 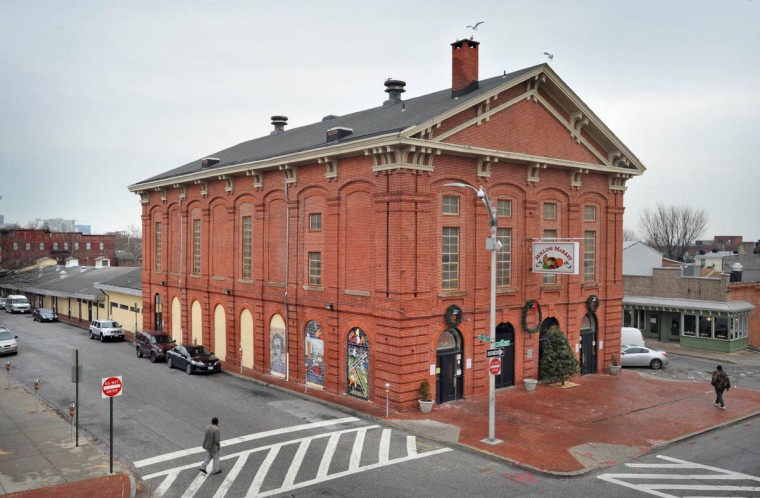 The tall brick structure west of the long shed at Hollins Market dates back to 1877. It’s the oldest of the existing neighborhood markets, and was established in 1846. (Amy Davis, Baltimore Sun) 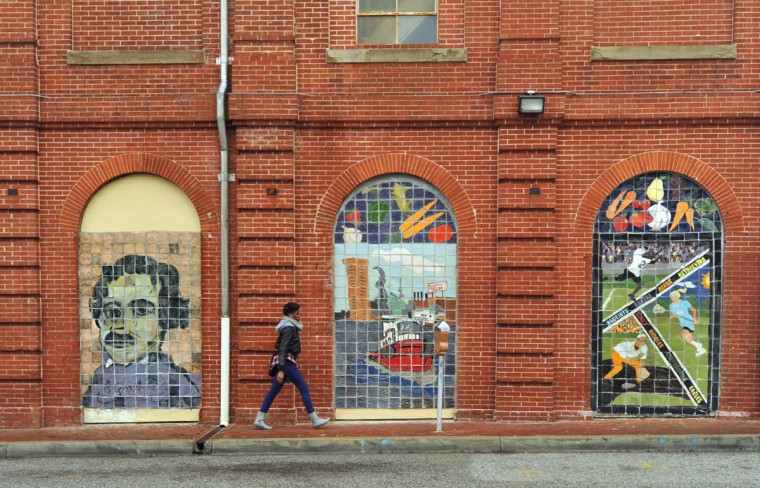 Tile murals on the north side of of Hollins Street at the Hollins Market. The Amity Street home of Edgar Allan Poe, pictured at left, is a half mile from the market. (Amy Davis, Baltimore Sun) 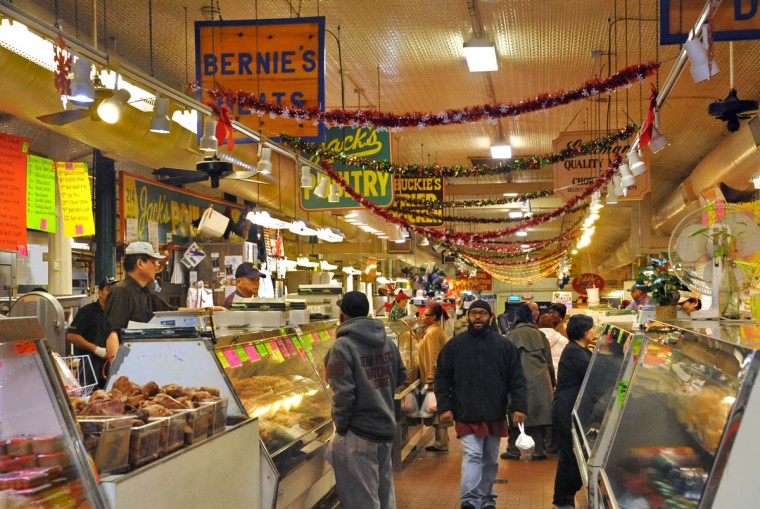 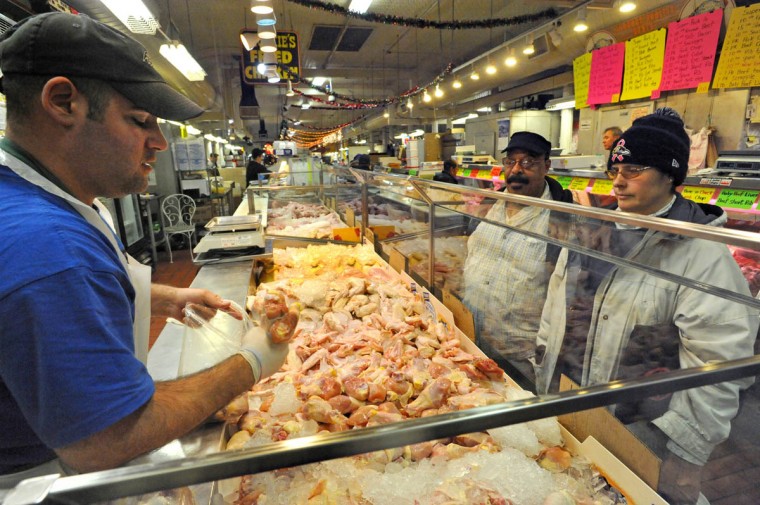 Erik Walder, nephew of the owner of Jack’s Poultry at Hollins Market, fills an order of 30 drumsticks for Fred, center, and Shannon Deaouvlt , right, a couple that comes regularly from Catonsville to this stand. (Amy Davis, Baltimore Sun) 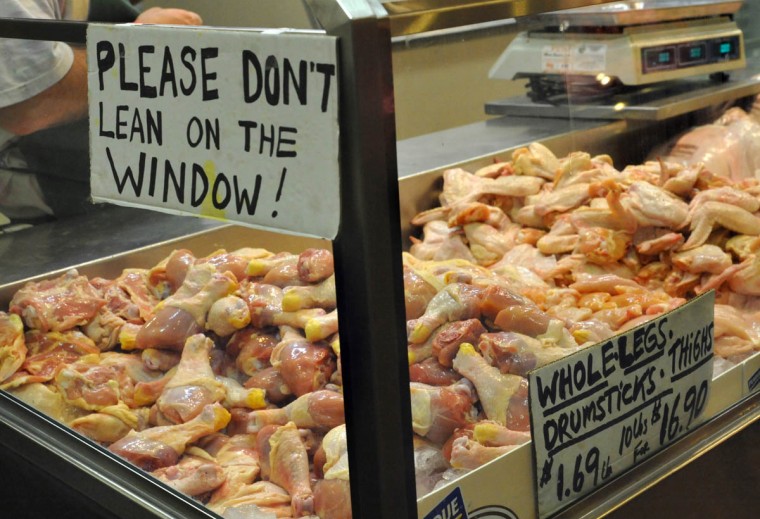 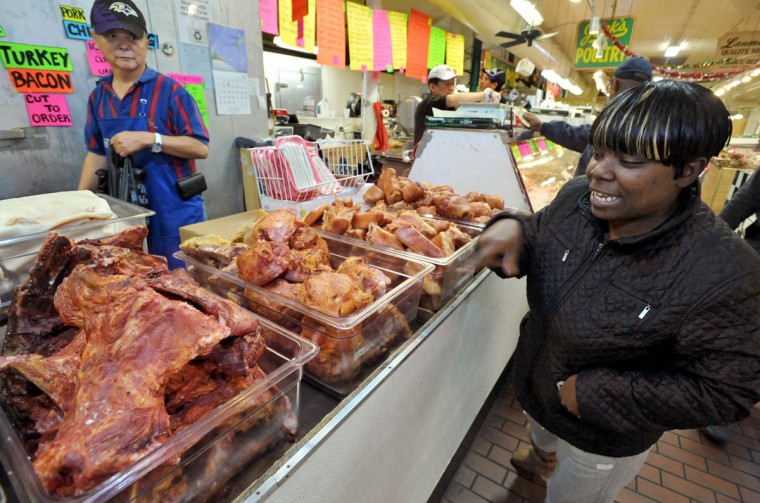 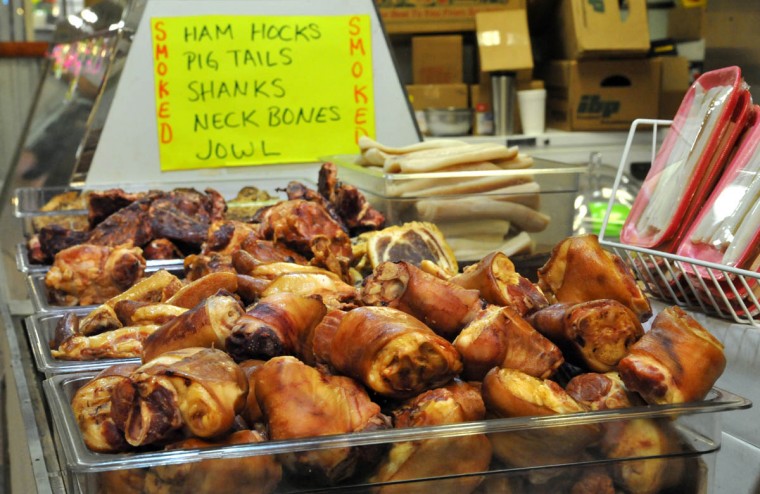 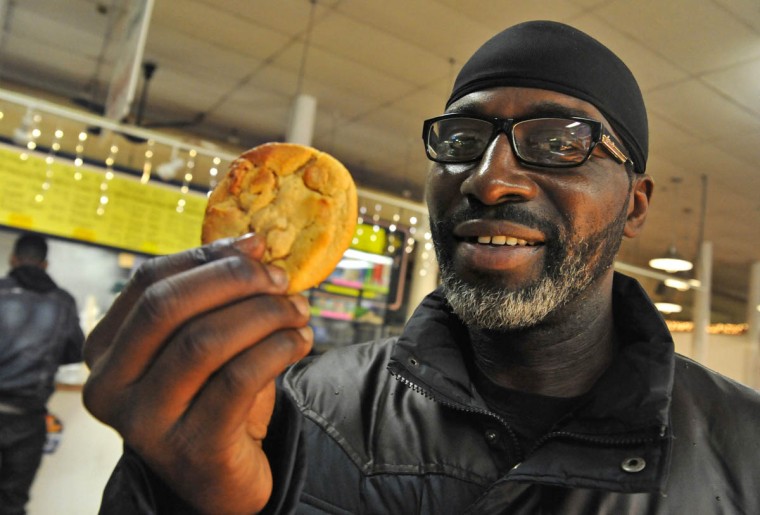 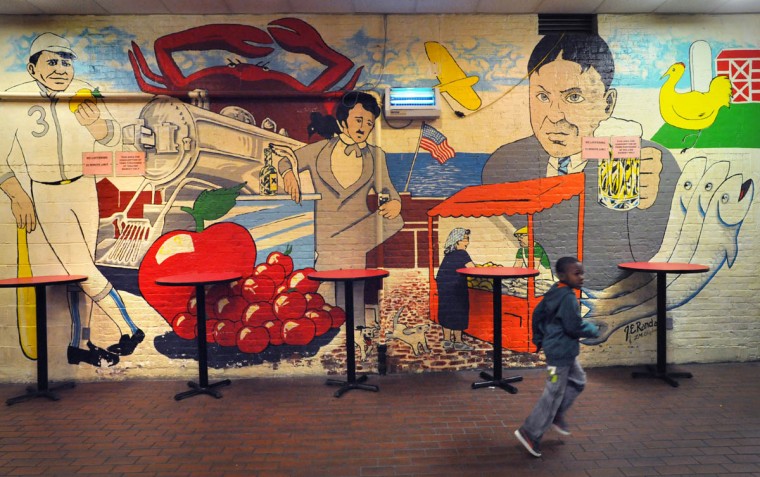 A boy runs past a mural, probably painted over thirty years ago, at the Hollins Market. Famous Baltimoreans depicted who hailed from the vicinity of the market include, from left, Babe Ruth, Edgar Allan Poe, and H.L. Mencken. (Amy Davis, Baltimore Sun) 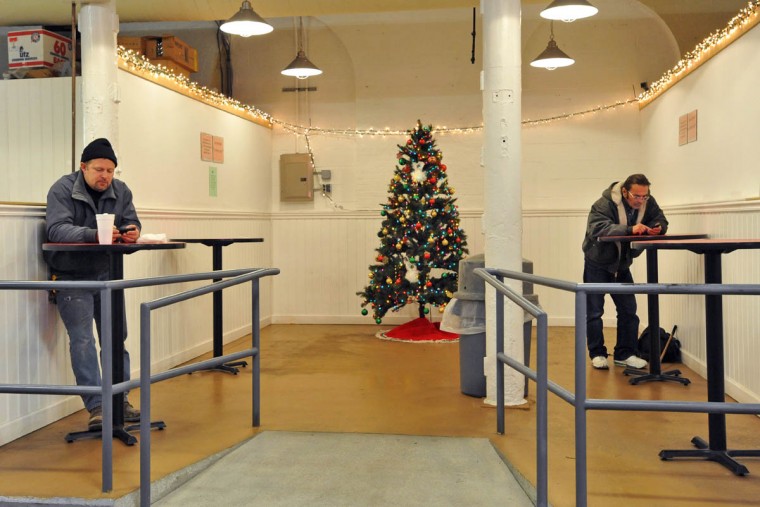 Micah Rehn of Baltimore, left, a contractor working in the area, and Dave Chatterton of Pasadena, right, visiting his brother, stop by Hollins Market at lunchtime. (Amy Davis, Baltimore Sun) 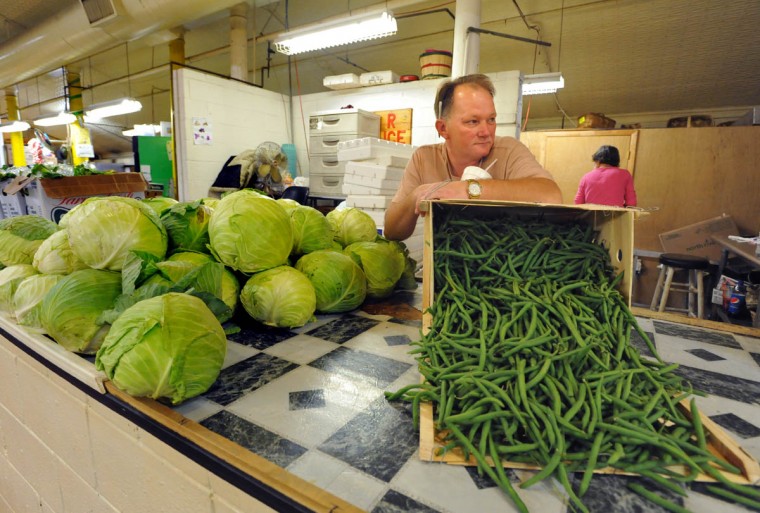 Francis Joseph Baroch, 51, whose nickname is “Lumpy,” is the owner of L&R Produce. He has worked at Hollins Market for 27 years. His grandfather, Edwin Tharle sold produce from a truck at Monroe and Lombard Streets. At one time there were three produce stands at Hollins Market: Lumpy’s, his parents’ and another vendor. Now L&R is the only one. (Amy Davis, Baltimore Sun) 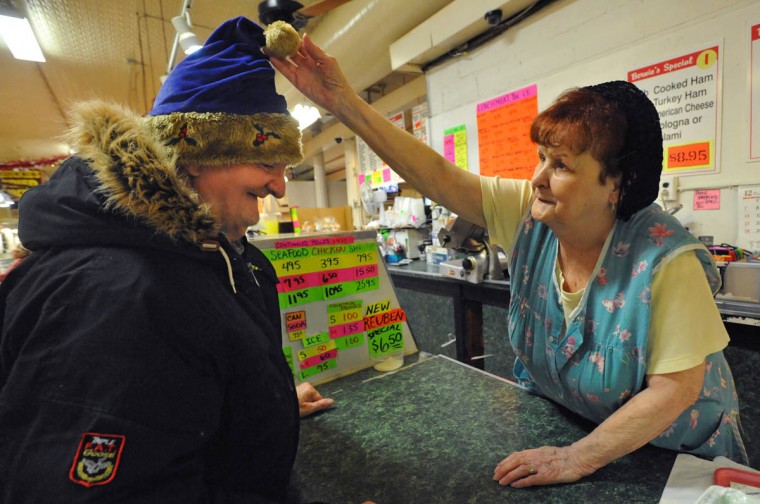 Elsie Wade, who has worked at Hollins Market for 35 years, adjusts the pom pom on Timmy Bailey’s hat. Bailey has worked at the market since he was a teenager, taking out the trash for the vendors. Wade has worked at Bernie’s Deli for 14 years. Previously she worked at Sophie’s Bakery and Mike’s Lunch. (Amy Davis, Baltimore Sun) 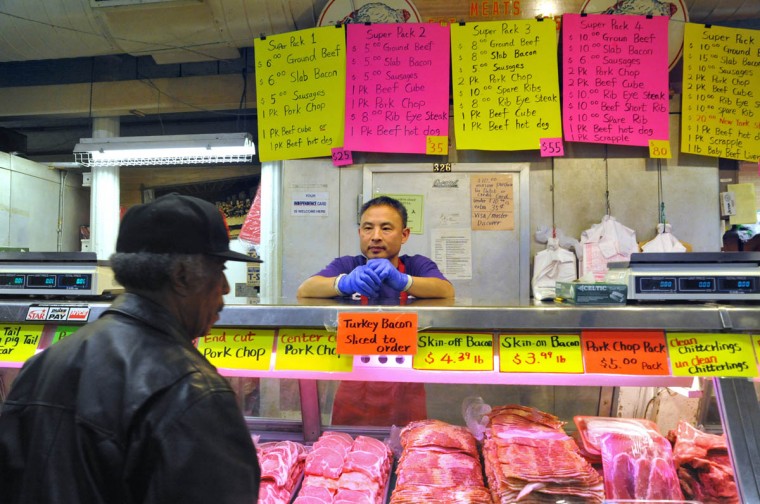 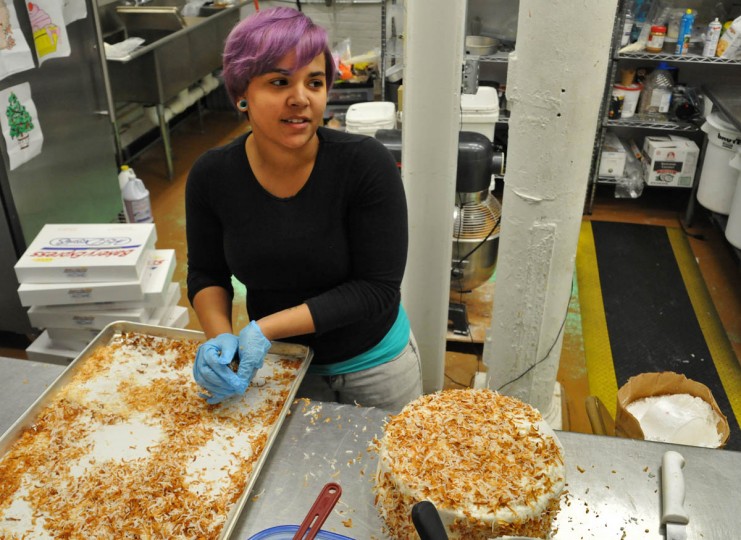 Brittani Wilson adds the finishing touches of toasted coconut to a pina colada cake that will be sold by the slice at MTD Bakery (“Making That Dough”) at Hollins Market. (Amy Davis, Baltimore Sun) 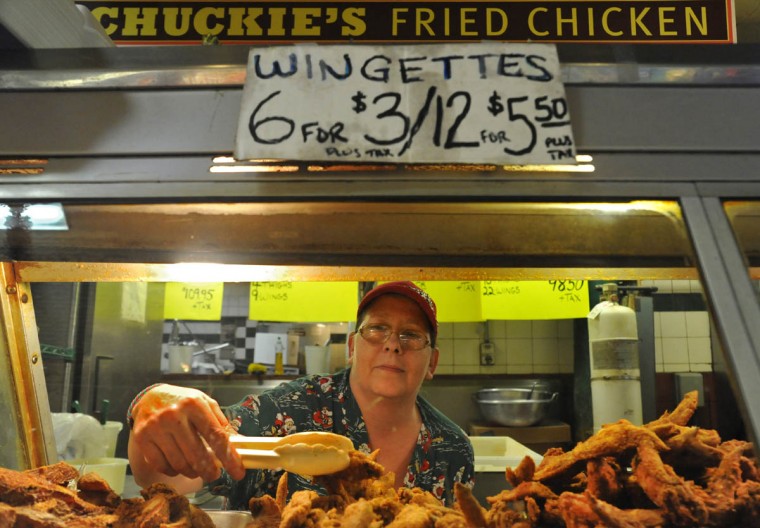 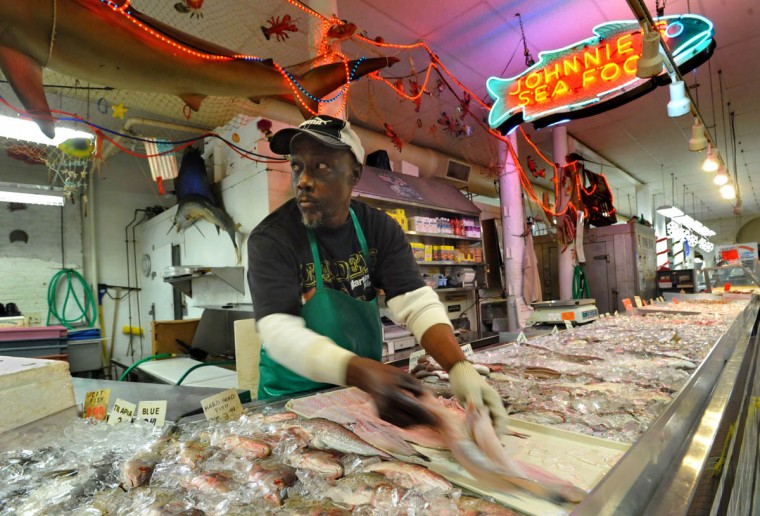 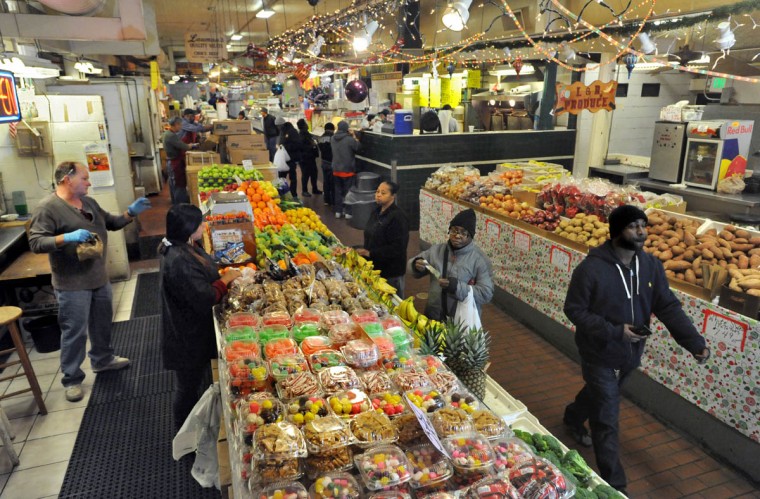 Shoppers at L &R Produce, which has displays on both sides of the aisle in the middle of the Hollins Market. Owner Francis Joseph Baroch, 51, known as “Lumpy,” is standing at left, with employee Susana Diaz. (Amy Davis, Baltimore Sun) 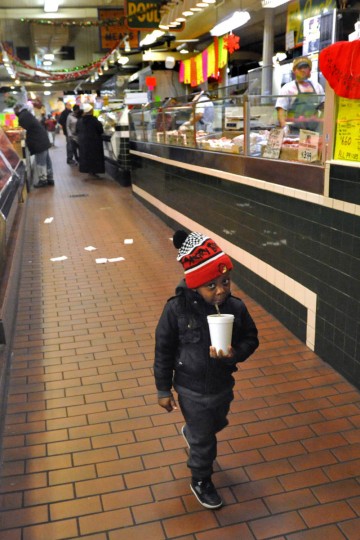 Until the late 1950’s, vendors were still selling their goods outside along Hollins Street. There are currently thirteen vendors, with only a few vacant stalls. In addition to the food offerings, there is an enclosed convenience store, plus “Quiet Time,” a stall selling inspirational gifts, plants, candles and aroma therapy. Hollins Market is operated by Baltimore Public Markets Corporation, a non-profit group.

Francis Joseph Baroch, 51, known to regulars as “Lumpy,” has run L&R Produce for 27 years. His parents once had a produce stand at the market. “Years ago,” Baroch recalled, “you couldn’t get up the aisle way, it was so crowded.” Mary Petty, another old-timer from Chuckie’s Fried Chicken, observed that, “The younger generation doesn’t want to cook.” A lot of loyal, older customers have moved away or died, but another generation of Baltimoreans still appreciates the traditional atmosphere and reasonable prices for carry-out meals, fresh meats, fish, fruit and vegetables.