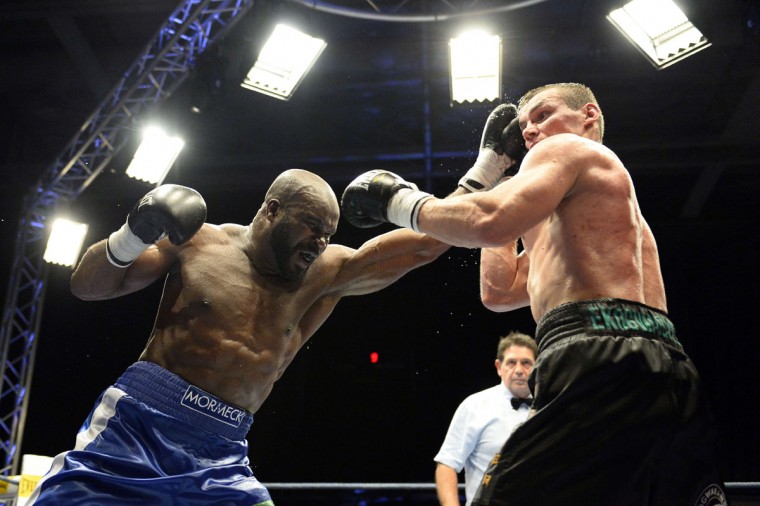 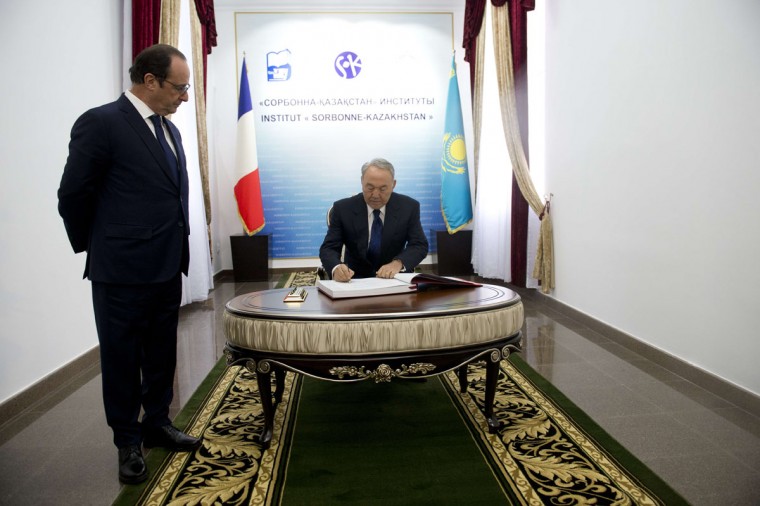 France’s President Francois Hollande (left) looks on as Kazakhstan’s President Nursultan Nazarbayev signs the guests’ book, during the inauguration of the “Sorbonne-Kazakhstan ” institute in Almaty, on December 6, 2014 as part of Hollande’s two-day visit to Kazakhstan. (ALAIN JOCARD/AFP/Getty Images) 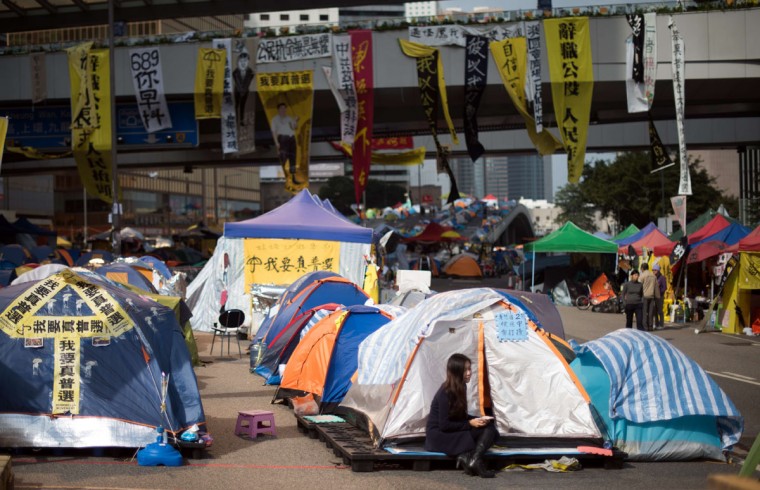 A girl sits outside a tent at the movement’s main protest site in the Admiralty district of Hong Kong on December 6, 2014. Benny Tai, a founder of Hong Kong’s pro-democracy Occupy movement branded the occupation of the city’s main roads as “high-risk” , urging protesters to turn to new methods of civil disobedience to push for electoral reform. (JOHANNES EISELE/AFP/Getty Images) 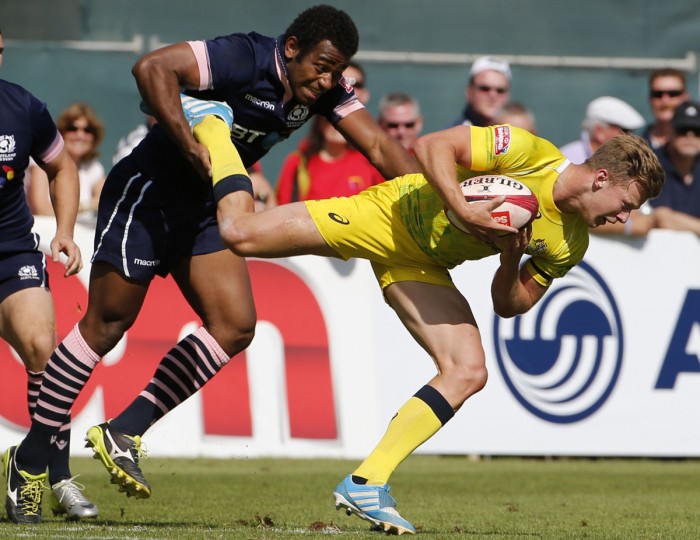 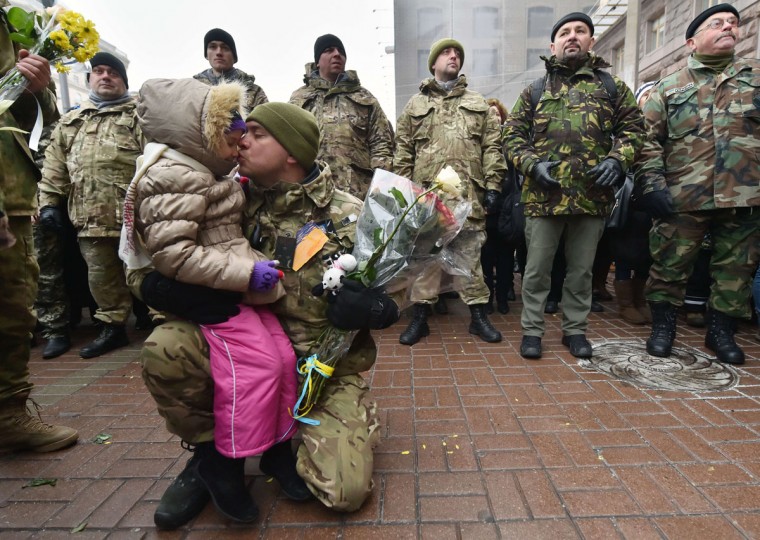 People greet to servicemen of the Ukrainian volunteer battalion “Kiev 12” who took part in anti-terrorists operation (ATO) in the east of the country and have come back for a two-week rest, during a welcoming ceremony in the center of Kiev on December 6, 2014. Ukraine’s foreign minister said Friday that his war-torn country needed a “real” ceasefire, a day after Ukraine and pro-Russian rebels agreed on a fresh truce starting on December 9. (SERGEI SUPINSKY/AFP/Getty Images) 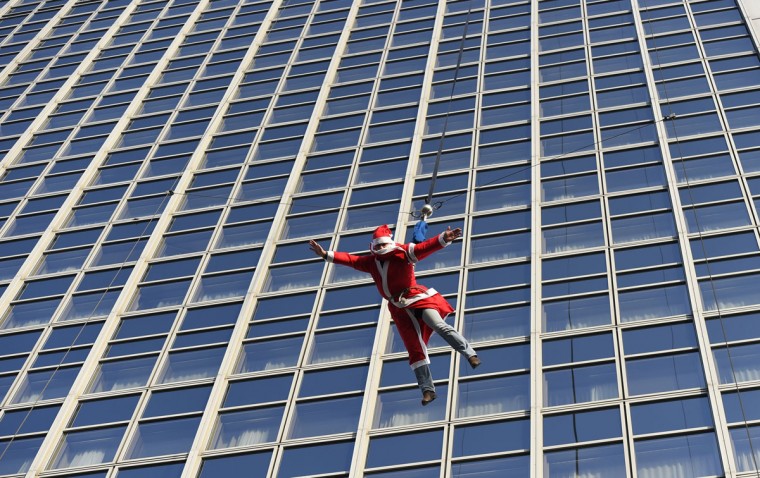 A man dressed as Father Christmas makes a base flying jump from the top of the Forum hotel in Berlin’s district December 6, 2014. (TOBIAS SCHWARZ/AFP/Getty Images) 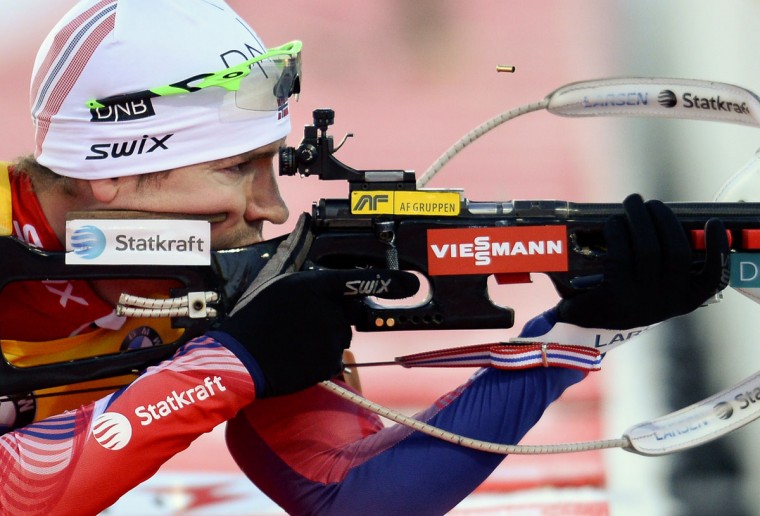 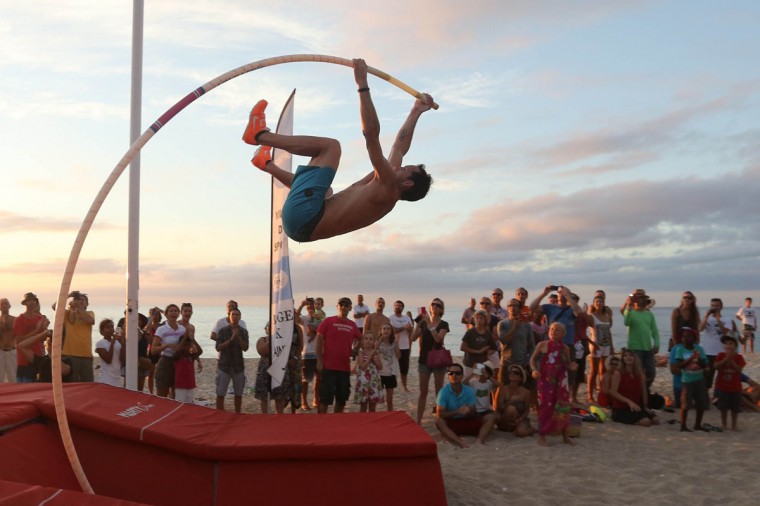 French Olympic pole vault champion and world record holder Renaud Lavillenie participates in a demonstration during “Boucan Perche” on the beach of Boucan Canot, on the west coast of the French Indian Ocean island of La Reunion on December 6, 2014. (RICHARD BOUHET/AFP/Getty Images) 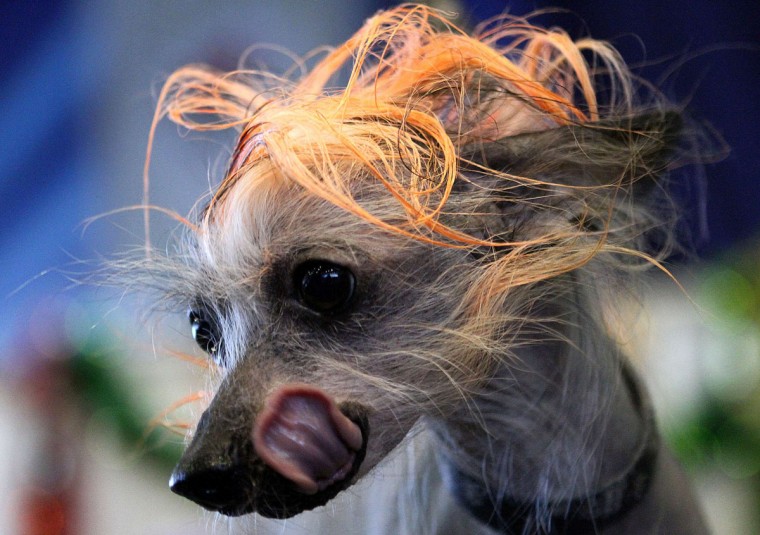 A dog is presented during a dog show in Minsk on December 6, 2014. (SERGEI GAPON/AFP/Getty Images) 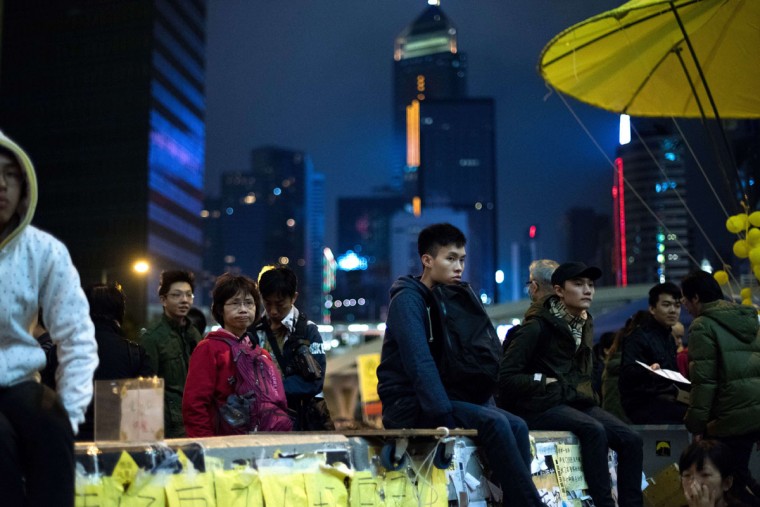 People sit on a wall as they listen to a speaker at the movement’s main protest site in the Admiralty district of Hong Kong on December 6, 2014. Joshua Wong, the teenage face of Hong Kong’s pro-democracy movement, said he has ended a four-day hunger strike designed to force the government into further talks on political reform. (JOHANNES EISELE/AFP/Getty) 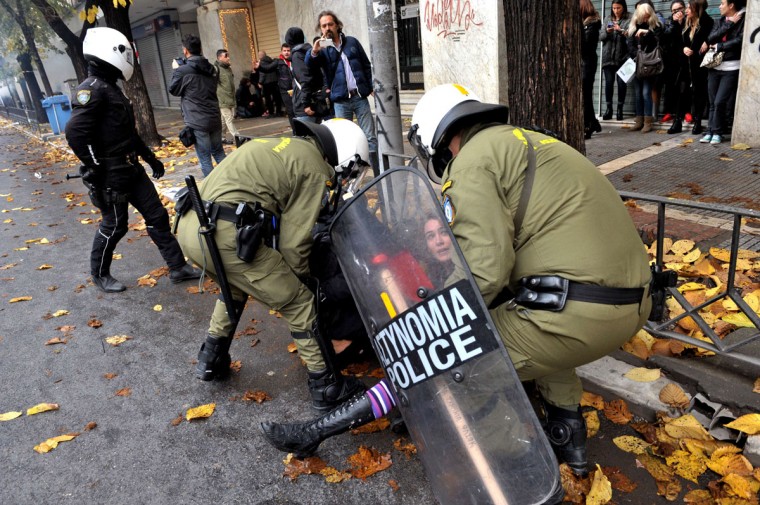 Riot police detain a demonstrator on December 6, 2014, during a protest to commemorate the six-year anniversary of the fatal shooting of teenager Alexis Grigoropoulos by a police officer, an event that plunged Greece into weeks of youth riots. The commemoration is held as a close friend of Grigoropoulos, 21-year-old anarchist Nikos Romanos, jailed for attempted bank robbery, is on the 26th day of a hunger strike. (SAKIS MITROLIDIS/AFP/Getty Images) 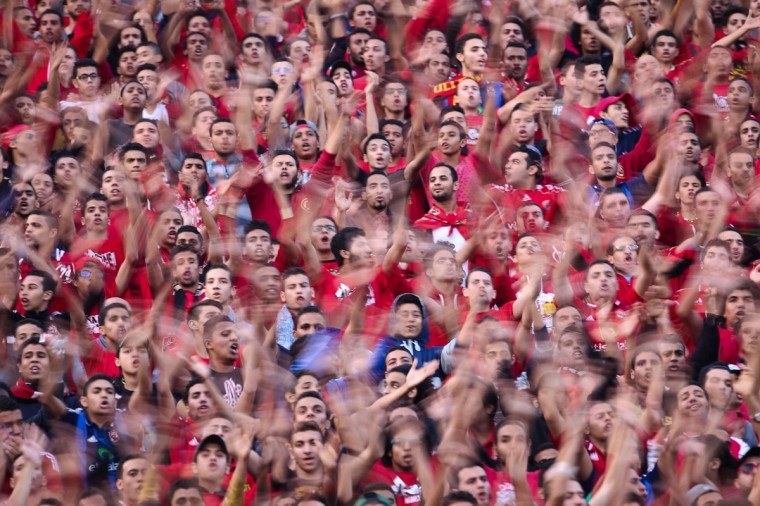 Egypt’s Al-Ahly supporters cheer for their team before the second leg of their CAF Confederation Cup final football match against Ivory Coast’s Sewe Sport at the Cairo Stadium on December 6, 2014, in the Egyptian capital. Sewe Sport won the first leg 2-1. (MOHAMED EL-SHAHED/AFP/Getty Images) 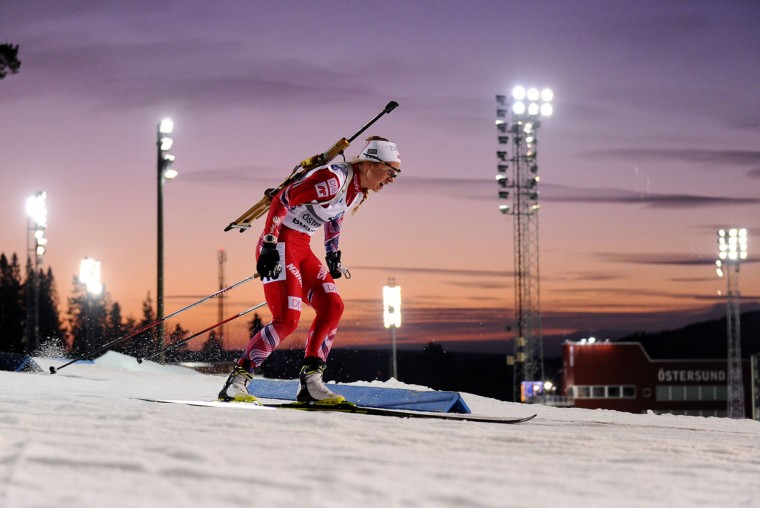 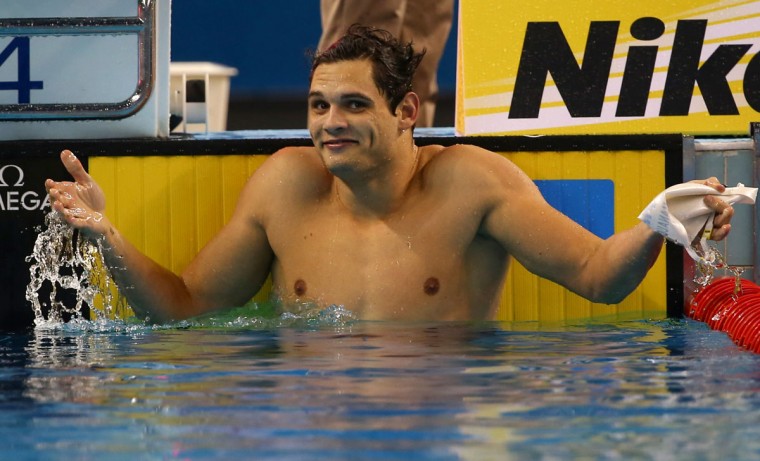 Florent Manaudou of France reacts after winning the Men’s 50m Backstroke during the 12th Fina World Swimming Championships (25m) on December 6, 2014 in the Qatari capital Doha. Manaudou set his second world record in 24 hours as he claimed the 50m backstroke title in 22.22sec. (MARWAN NAAMANI/AFP/Getty Images) 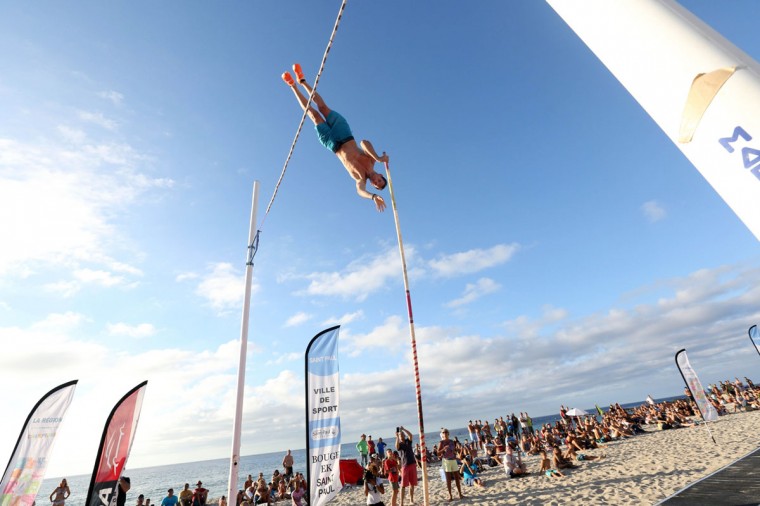 French Olympic pole vault champion and world record holder Renaud Lavillenie participates in a demonstration during “Boucan Perche” on the beach of Boucan Canot, on the west coast of the French Indian Ocean island of La Reunion on December 6, 2014. (RICHARD BOUHET/AFP/Getty Images)

« The Festival of Lights in Lyon, France » How The Sun covered Pearl Harbor