As the fall high school varsity sports season comes to a close, we take a look back at the best photographs from across the greater Baltimore region. These pictures represent the intensity of competition as well as the joy of victory. 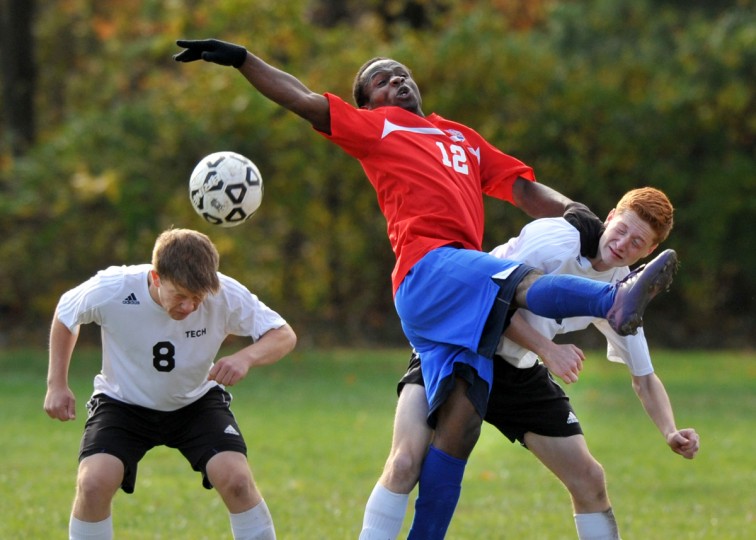 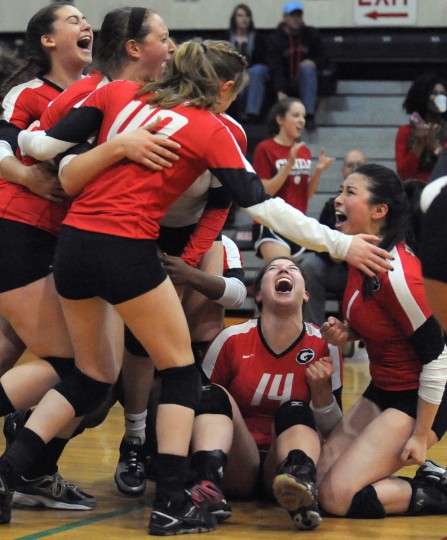 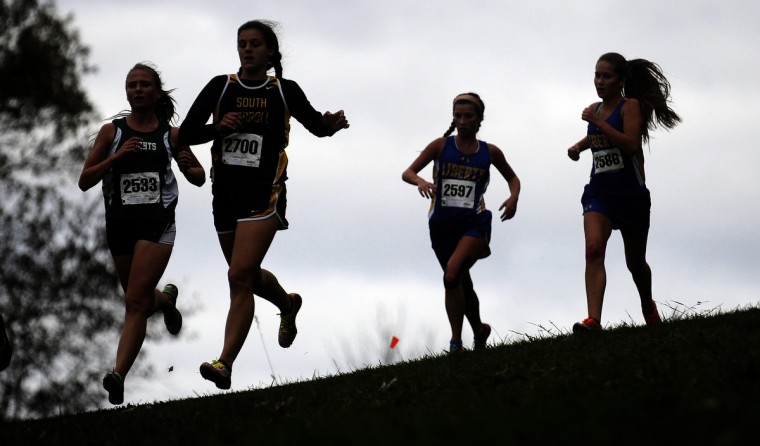 Runners are silhouetted agianst the sky as they crest a hill while competing at the Carroll County cross country championship at McDaniel College in Westminster Thursday, Oct. 23. (Dave Munch/BSMG) 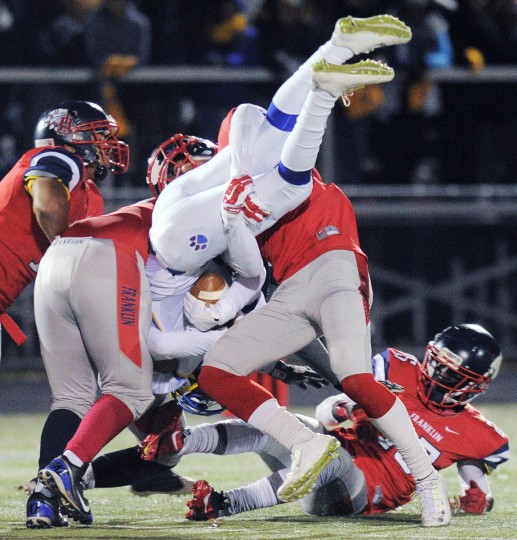 Franklin’s Juantez McRae pile drives Thomas Stone Cougars’ Taejon Gray when he picked up a punt instead of letting it roll during the MPSSAA Class 3A State Semifinals at Franklin High School. (Karl Merton Ferron/Baltimore Sun) 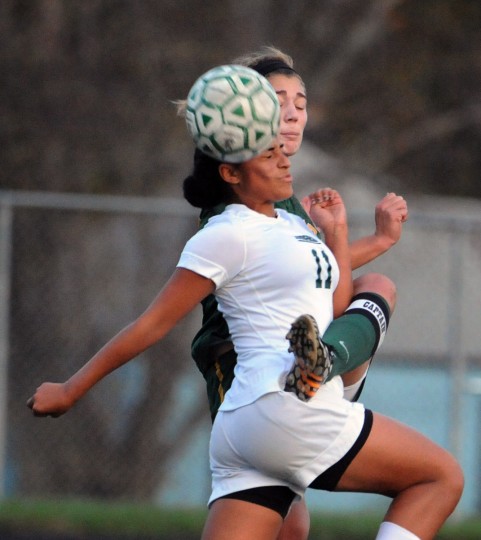 Atholton’s Ileana Thompson (#11), left, and Wilde Lake’s Rachel Lazris battle for a corner kick ball in front of Atholton’s goal in the first half. Wilde Lake defeated Atholton by score of 1 to 0 in girls soccer in first round of playoff game. (Kenneth K. Lam/Baltimore Sun) 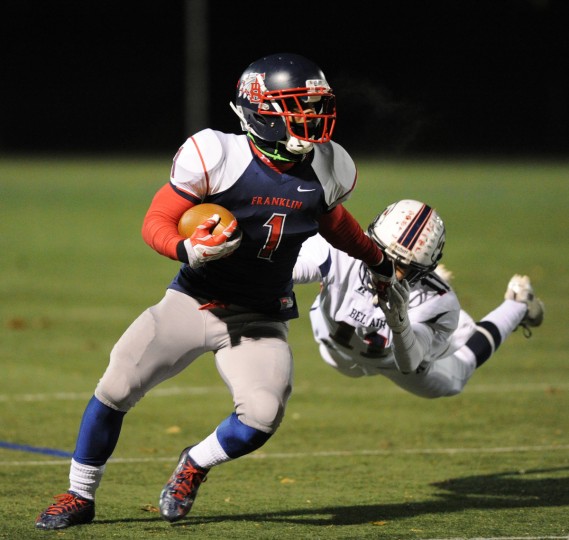 Bel Air’s Josh Huggins tries to hold on and make the tackle on Franklin’s Darius Hinton as he makes a cut on a carry in Friday night’s playoff game at Franklin. (Matt Button/BSMG) 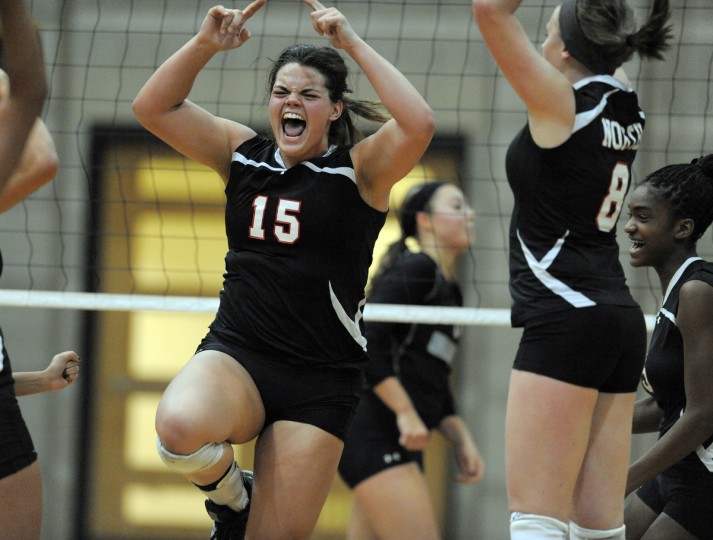 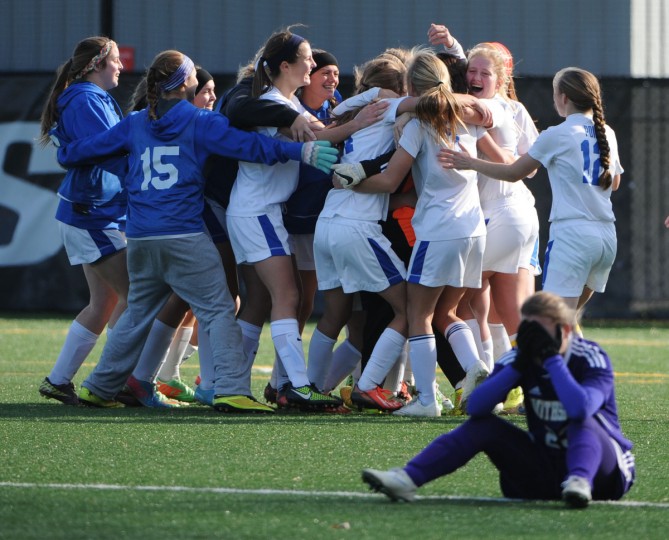 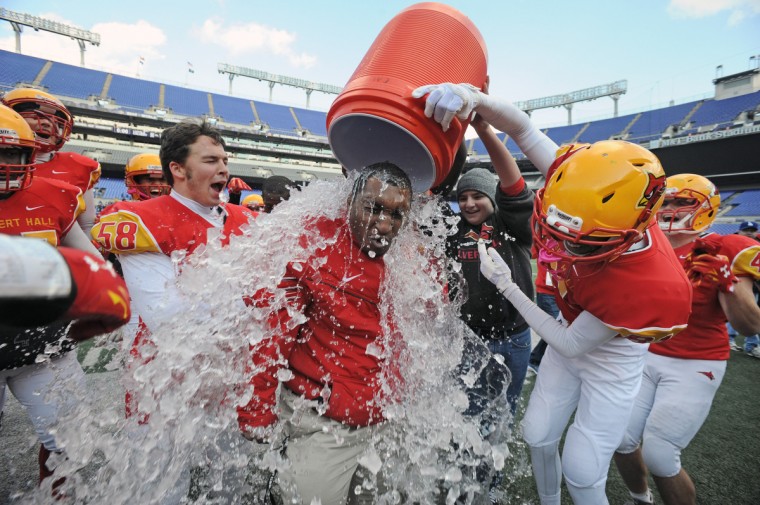 Calvert Hall head coach Donald Davis, center, is showered with a bucket of ice water by his players after defeating Loyola by score of 25 to 22 to win the 95th Turkey Bowl at M & T Bank Stadium. (Kenneth K. Lam/Baltimore Sun) 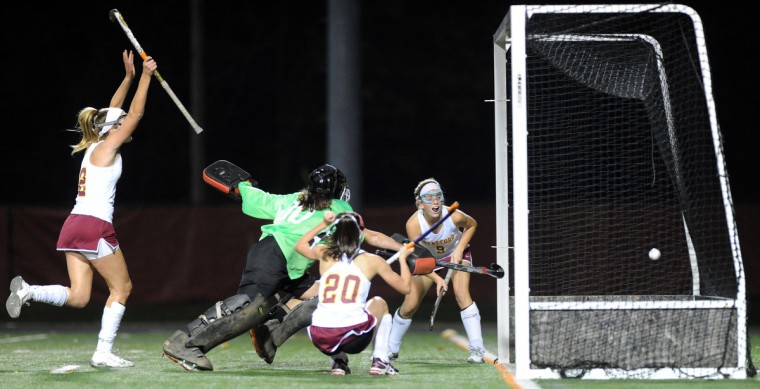 Hereford teammates, from left, Rachel Karwacki, Emma Reider and Emily Endres react as Endres deflects a pass into the net, out of the reach of Dulaney goalie Kalie Paranzino for the first score of the game during the Baltimore County field hockey championship game at Woodlawn High School. (Brian Krista/BSMG) 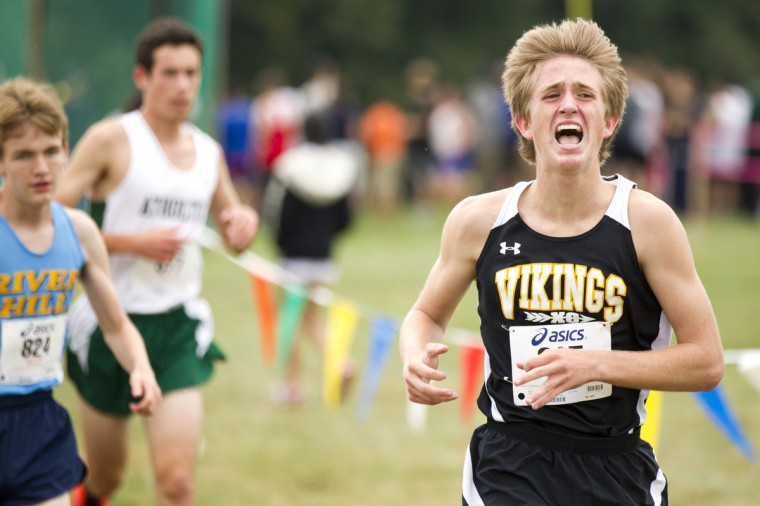 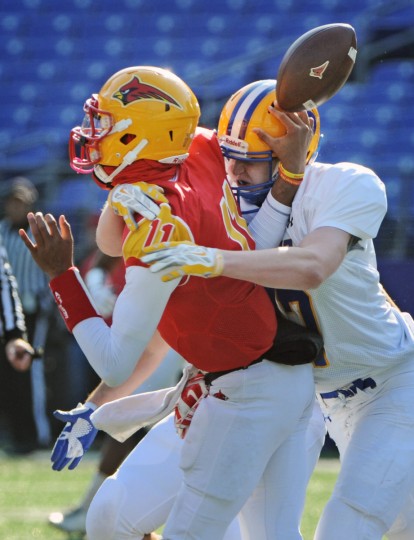 Loyola’s Dom Clark, right, caused Calvert Hall quarterback Kenji Bahar, left, to fumble the ball with a big hit in the second quarter. Calvert Hall was able to recover the fumble and finsih the drive with a field goal before half time. Calvert Hall defeated Loyola by score of 25 to 22 to win the 95th Turkey Bowl at M & T Bank Stadium. (Kenneth K. Lam/Baltimore Sun) 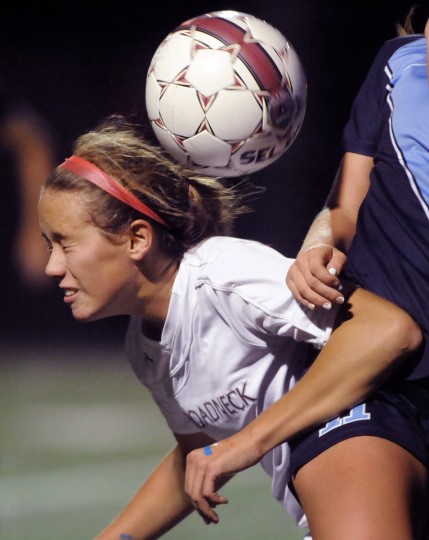 Broadneck’s Kayla Harris, who has two goals in the game, battles for the ball in against Chesapeake in the second half. Broadneck defeated Chesapeake in girls high school soccer. (Kenneth K. Lam/Baltimore Sun) 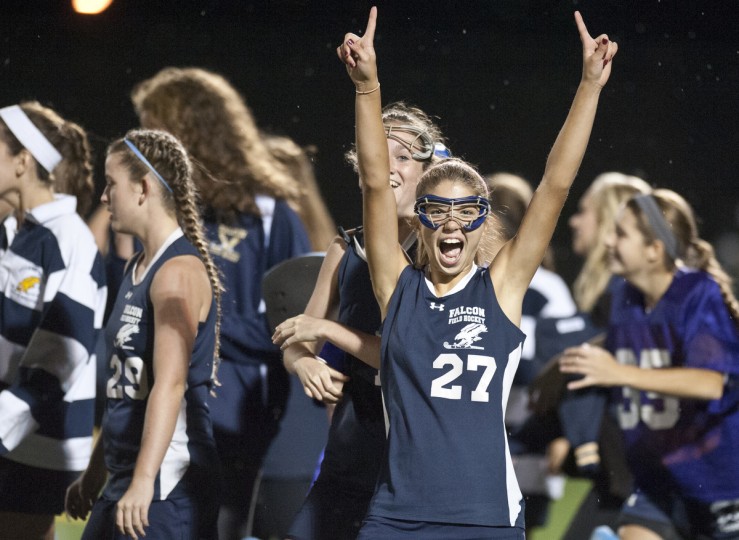 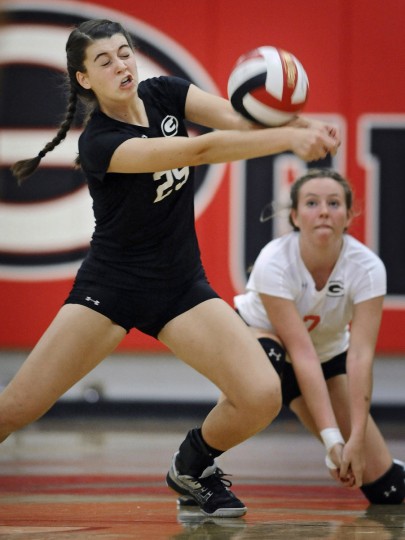 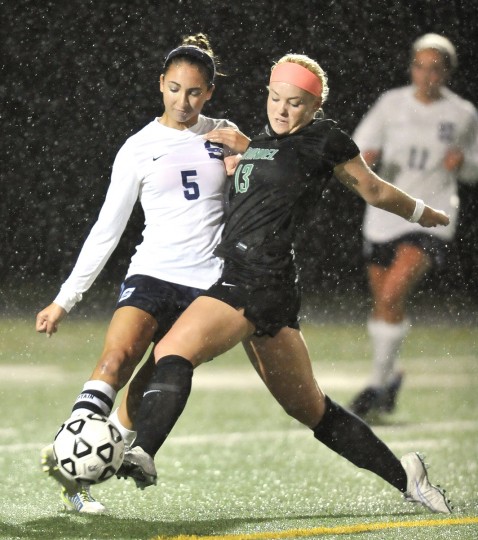 South River’s Lea Carter passes off to a teammate as Arundel’s Alysse Gapsis moves in for a tackle during Wednesday evenings championship game held at Broadneck High School in Arnold. (Matthew Cole/BSMG) 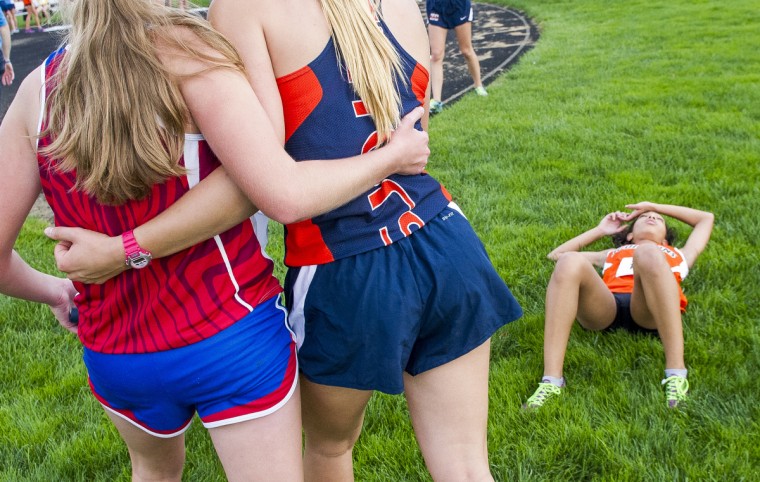 Two runners hold each other up as another collapses after the Girls A class race during the Howard County Cross Country Championships at Centennial High School in Ellicott City. (Scott Serio/for BSMG) 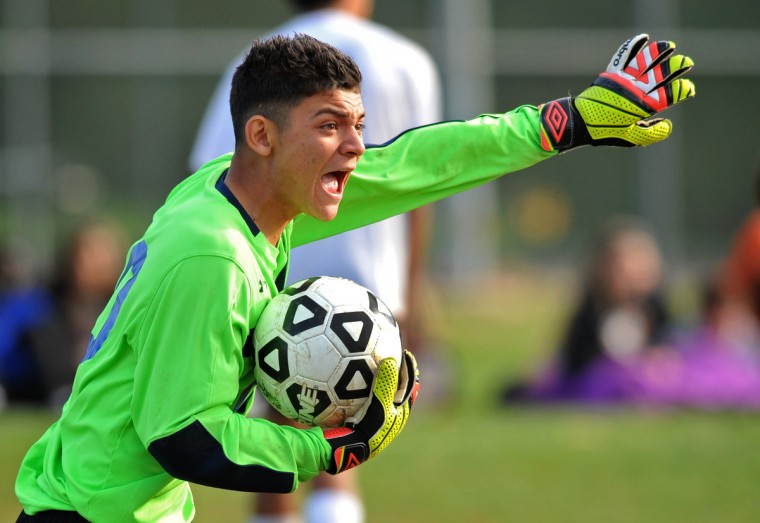 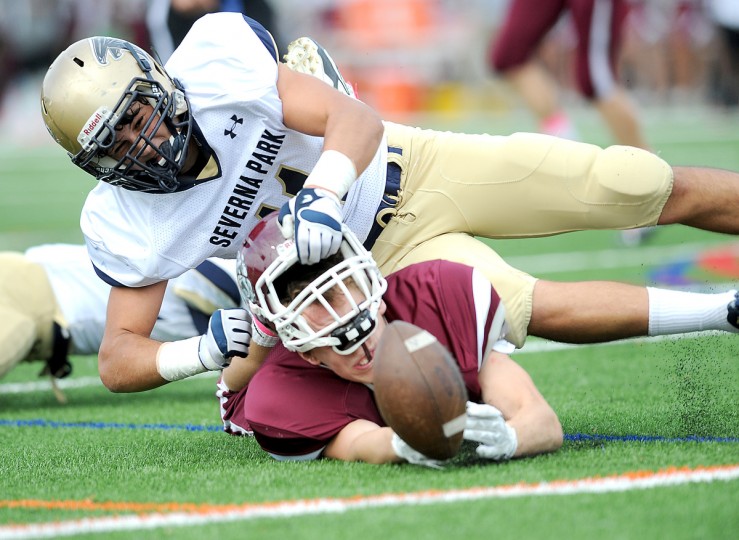 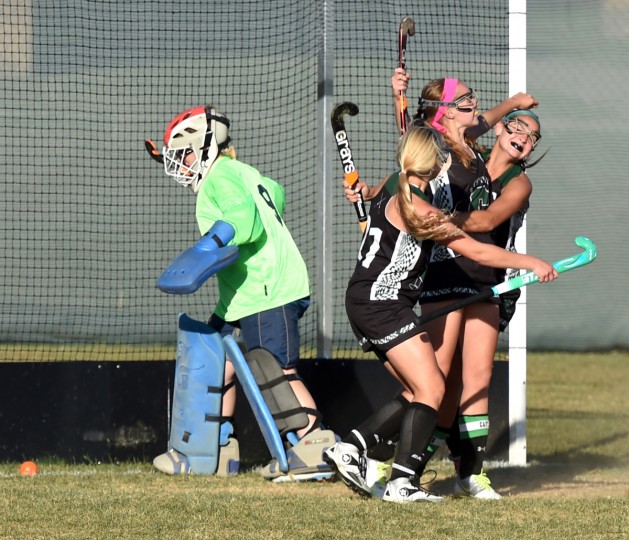 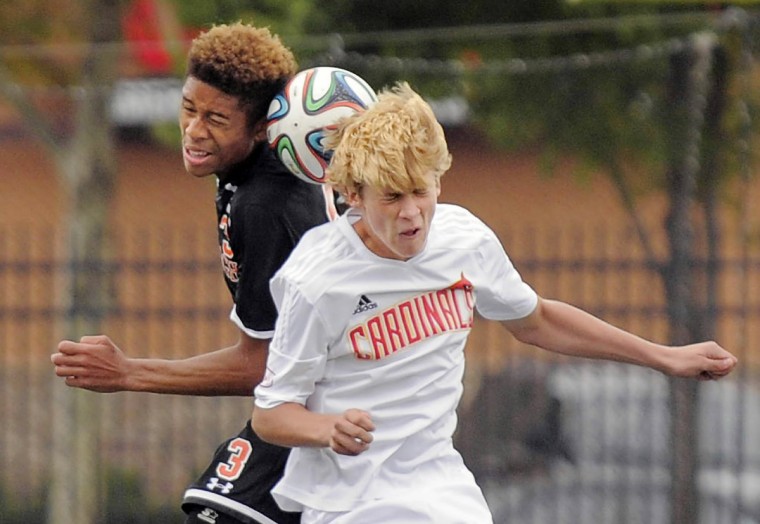 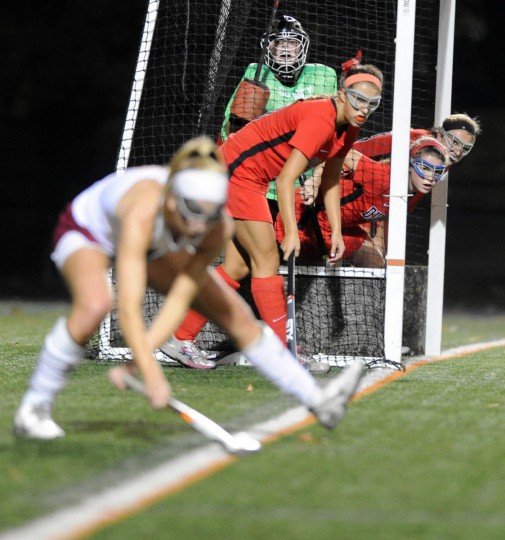 Dulaney players stand in the goal, anticipating the start of a corner by Hereford during the Baltimore County field hockey championship game at Woodlawn High School. (Brian Krista/BSMG) 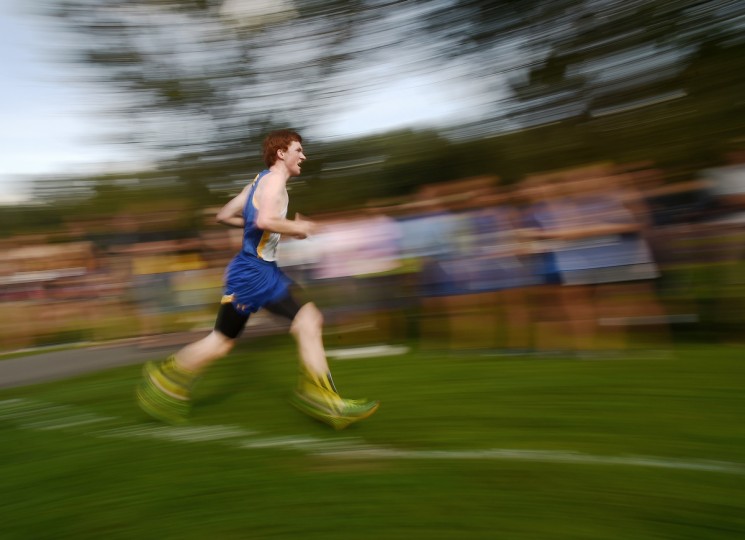 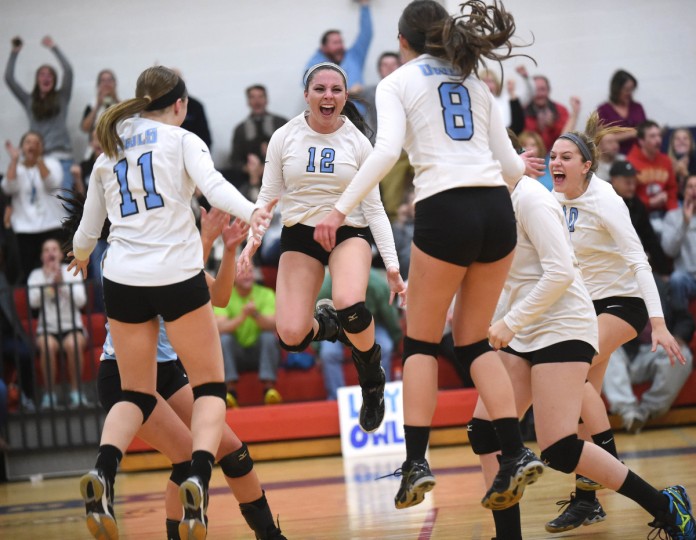 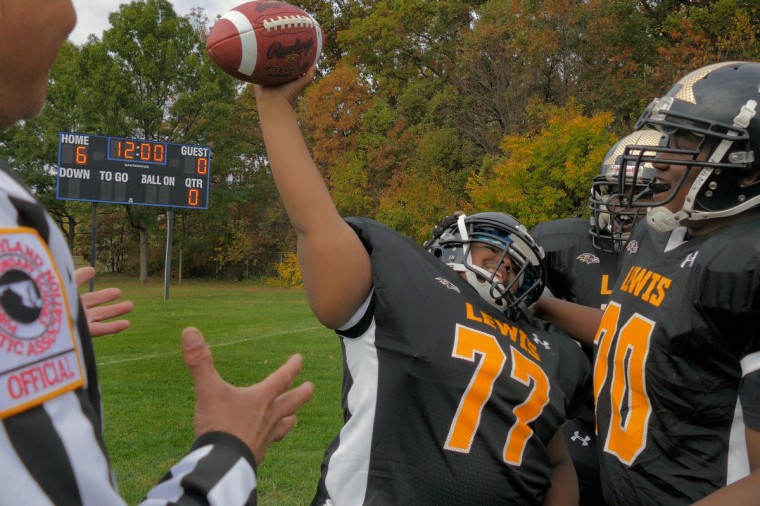 Reginald F. Lewis Falcons player-manager Michael Gardner holds up the football after scoring against the Digital Harbor RAM’s. The teams agreed to swap touchdowns in order to give Gardner an opportunity to score since he wears a prosthetic limb after losing his leg to cancer when he was eight years old. (Karl Merton Ferron/Baltimore Sun)