A promenade, orcas come out of their shells, the great date of Kiev | Nov. 21 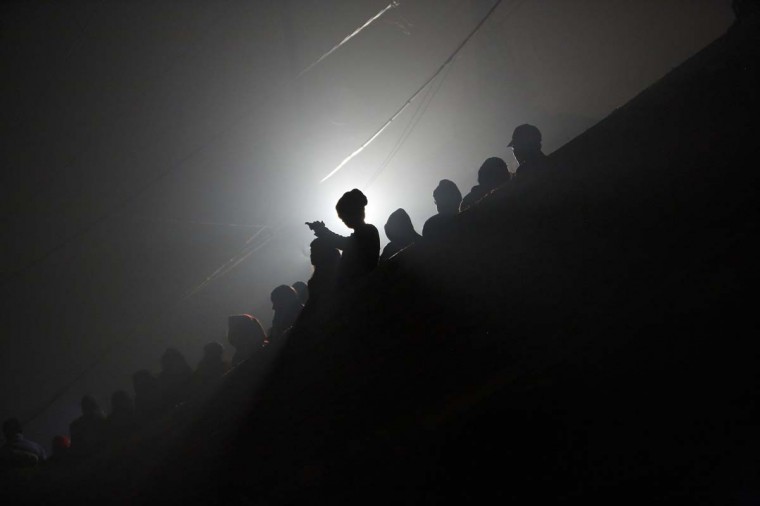 Devotees walk along the bridge at the premises of the Pashupatinath Temple, during the Bala Chaturdashi festival, in Kathmandu, November 21. The festival is celebrated by the worshippers by lighting oil lamps and scattering seven types of grains known as “sat biu” honouring the departed along a route at the temple. || PHOTO CREDIT: NAVESH CHITRAKAR – REUTERS 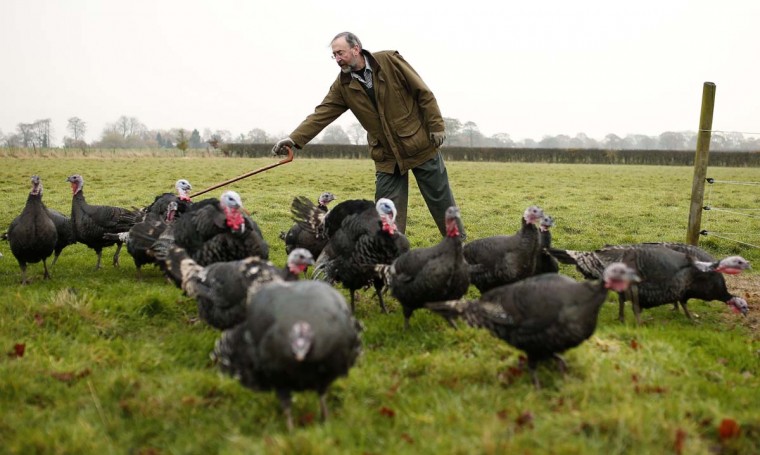 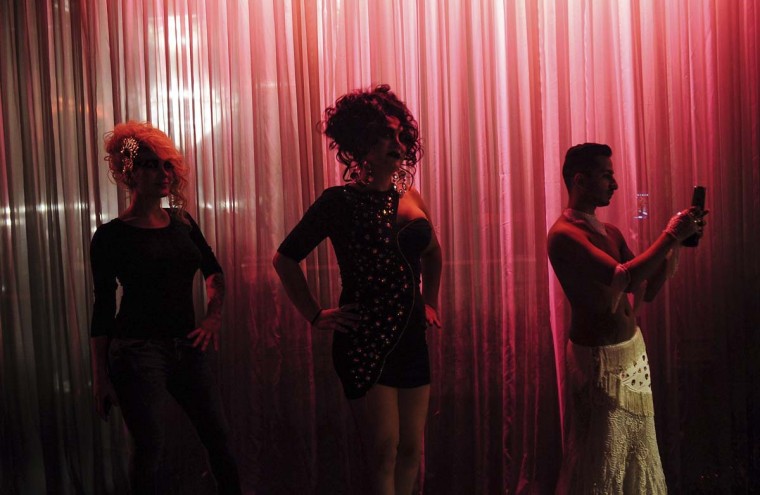 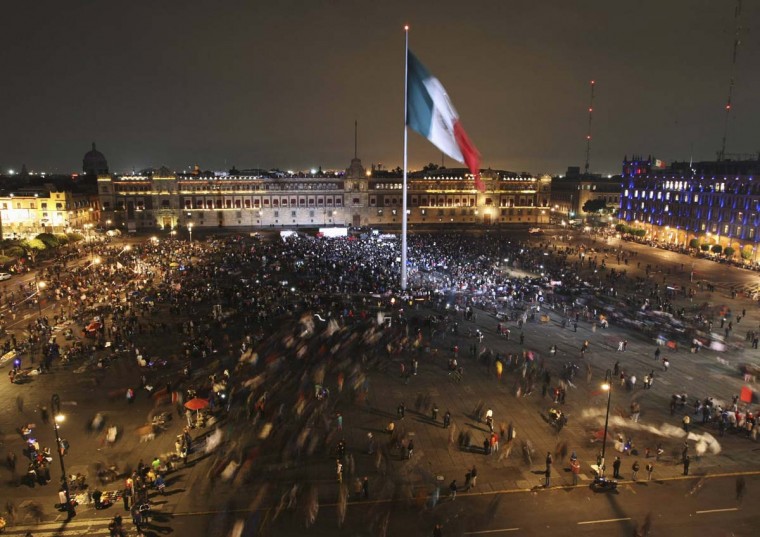 Demonstrators arrive at Zocalo Square during a protest in support of the 43 missing Ayotzinapa students in Mexico City November 20. Protesters threw Molotov cocktails and clashed with riot police outside Mexico City’s National Palace on Thursday as thousands protested against President Enrique Pena Nieto’s handling of the apparent massacre of 43 trainee school teachers. Hundreds of police in riot gear blocked access to the palace in the capital’s main square, the Zocalo, where thousands of protesters had earlier gathered for mostly peaceful protest in support of the students, apparently murdered after their abduction by corrupt police on September 26. || PHOTO CREDIT: BERNARDO MONTOYA – REUTERS 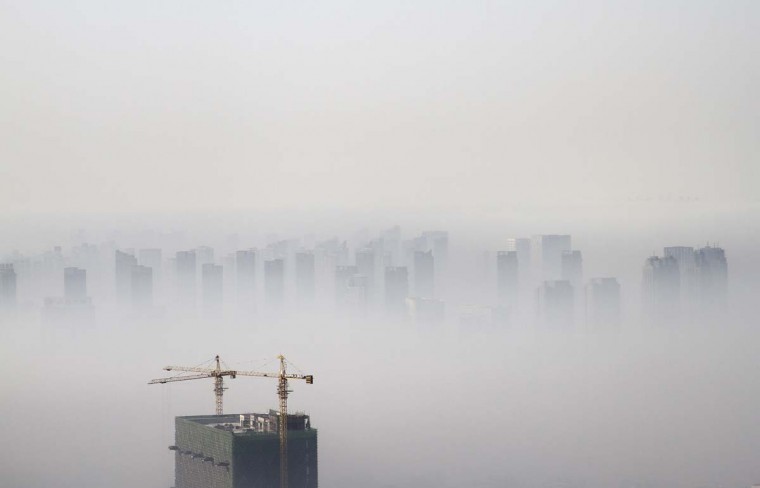 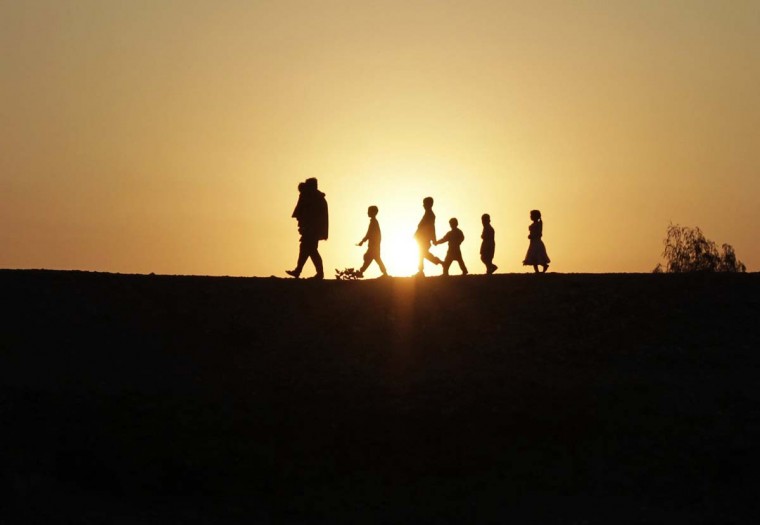 An Afghan family walks on a hilltop on their way on the outskirts of Jalalabad, November 21. || PHOTO CREDIT: PARWIZ – REUTERS 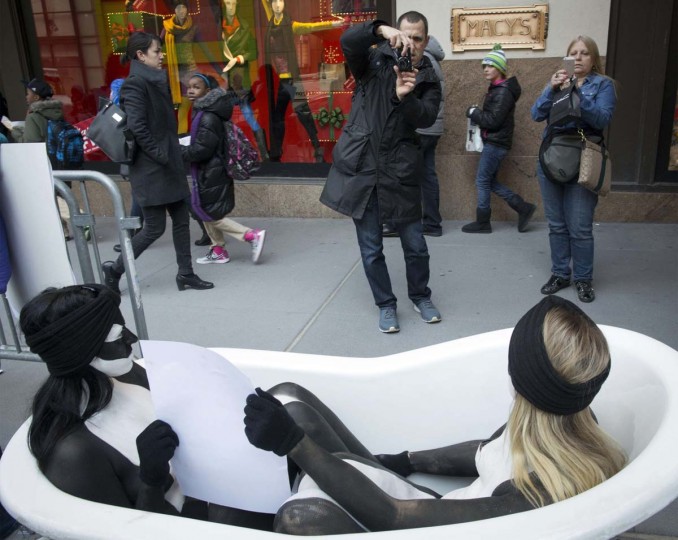 People stop to take pictures of naked women from the People for the Ethical Treatment of Animals (PETA) painted to resemble orca whales as they protest outside Macy’s department store in New York, November 20. Members of PETA demonstrated on Thursday against this year’s Macy’s Thanksgiving Day Parade that will include a SeaWorld float. || PHOTO CREDIT: BRENDAN MCDERMID – REUTERS 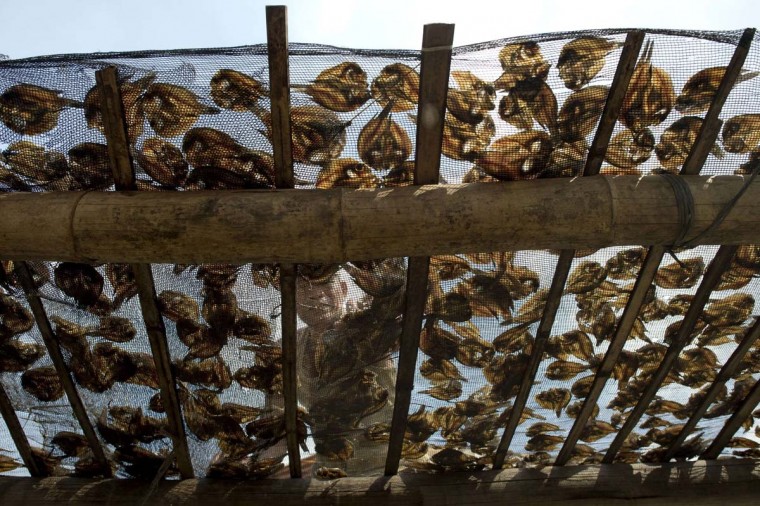 Fisherman Estelito Marijuan, 58, arranges dried fish at Manila Bay on November 21. World Fisheries Day is commemorated every November 21 and was established to draw attention to overfishing, habitat destruction and other serious threats to the sustainability of marine and freshwater resources. || CREDIT: NOEL CELIS – AFP/GETTY IMAGES 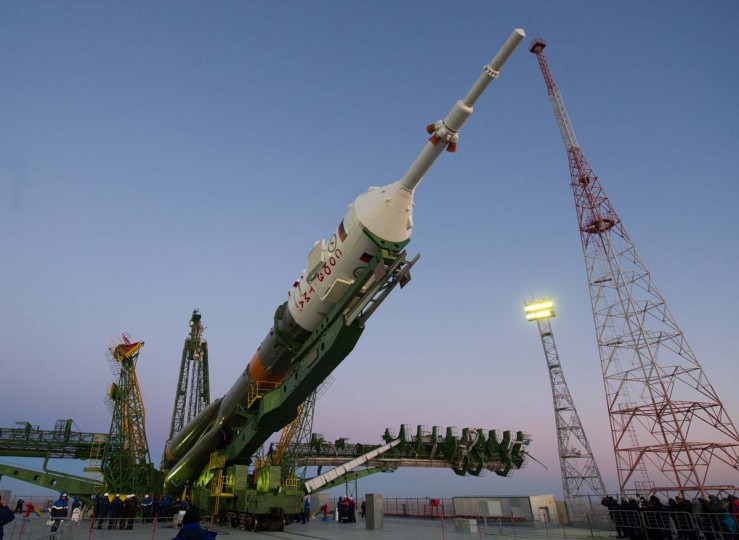 The Soyuz TMA-15M space rocket is mounted on a launch pad at the Russian-leased Baikonur cosmodrome in Kazakhstan on November 21. Members of the International space crew US astronaut Terry Virts, Russian cosmonaut Anton Shkaplerov and European Space Agency’s Italian astronaut Samantha Cristoforetti are scheduled to blast off to the International Space Station (ISS) from Baikonur on November 23. PHOTO CREDIT: AFP/GETTY IMAGES 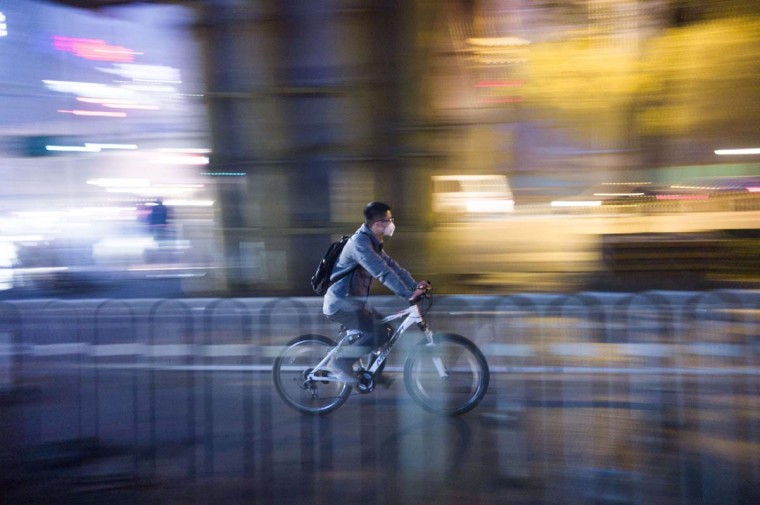 In this picture taken on November 20 a man wears a face mask as he rides a bicycle along a street as thick smog covered Beijing. Beijing on November 20 issued its first yellow pollution alert since the Apec summit ended on November 11. || CREDIT: FRED DUFOUR – AFP/GETTY IMAGES 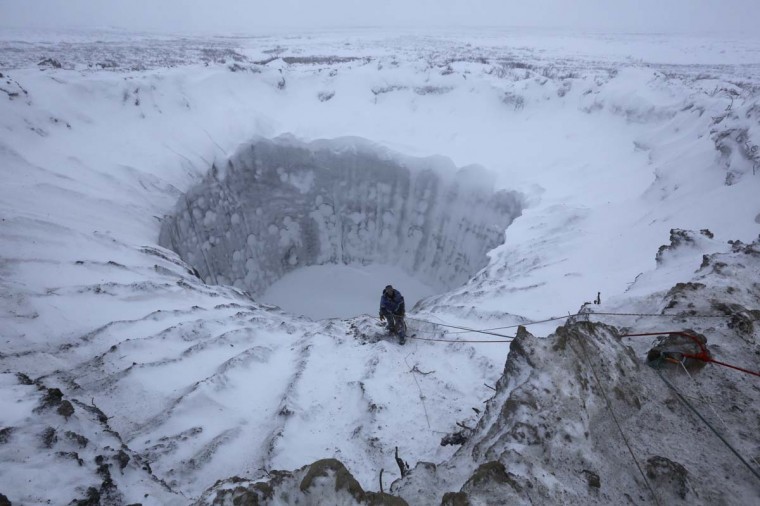 A member of an expedition group stands on the edge of a newly formed crater on the Yamal Peninsula, northern Siberia November 9. A group of scientists and discoverers in November went on an expedition initiated by the Russian Centre of Arctic Exploration to research the crater after pilots captured it on video in July 2014 which attracted the attention of world public. Participants managed to descend down to about 16 metres (52.4 feet) and reached the frozen surface of the base of the crater with a lake at least 10 metres (32.8 feet) deep below, according to Vladimir Pushkarev, head of the Russian Centre of Arctic Exploration. Experts, including geologists and historians, have not come to a consensus about the origin of the funnel yet, Russian media report. Picture taken November 9. || PHOTO CREDIT: VLADIMIR PUSHKAREV/RUSSIAN CENTRE OF ARCTIC EXPLORATION – REUTERS 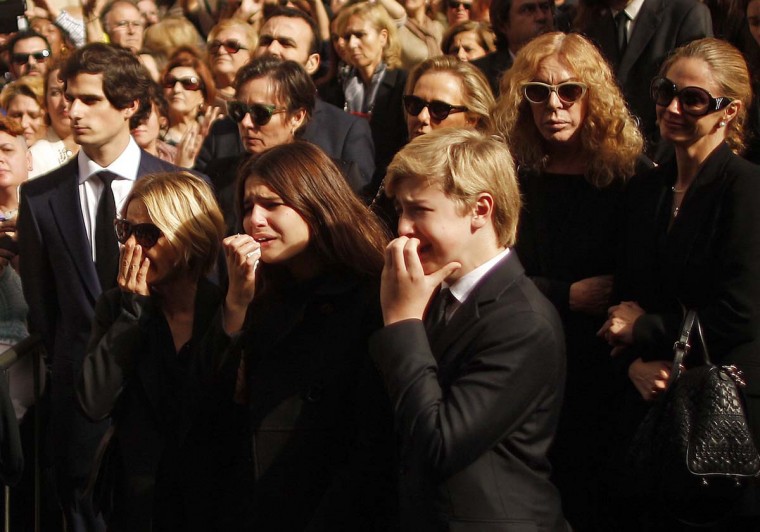 Spain’s Duchess of Alba Cayetana Fitz-James Stuart y Silva’s, daughter Maria Eugenia Martinez de Irujo (front L-R), granddaughter Cayetana, grandson Luis Martinez, and other relatives cry after her funeral outside a cathedral in the Andalusian capital of Seville November 21. Spain’s 18th Duchess of Alba, who died on Thursday aged 88, was one of Europe’s wealthiest and most titled aristocrats, the owner of fabulous palaces and priceless works of art. She died after a short illness, surrounded by family in the 14th century Palacio de Duenas in Seville. || PHOTO CREDIT: JON NAZCA – REUTERS 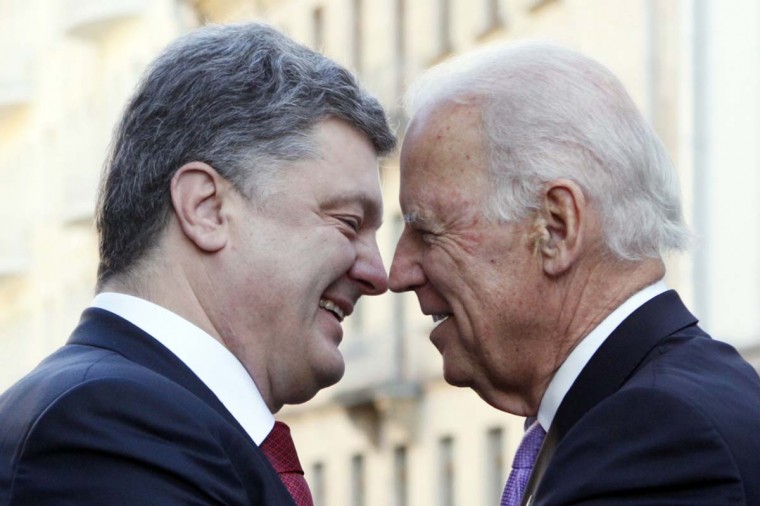 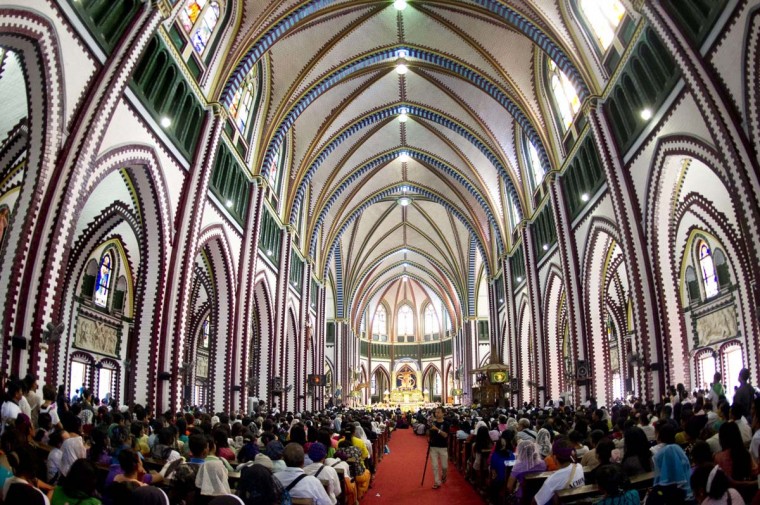 People attend the 500th Jubilee Year of the presence of Catholic Church in Myanmar in Yangon on November 21. Catholics mark 500 years of the church’s presence in the country. || CREDIT: YE AUNG THU – AFP/GETTY IMAGES