Fake foam tombstones, polyester-spun cobwebs, and elaborate “haunted” houses abound during the Halloween season, but if you want to see the real thing, head to Westminster Hall at 519 W. Fayette Street. An 18th century historic burial ground and catacombs, simultaneously macabre and serene, lies directly across North Greene Street from the looming glass tower of the Baltimore VA Medical Center. Edgar Allan Poe’s gravesite attracts the most attention, but many prominent civic and military leaders are buried here. 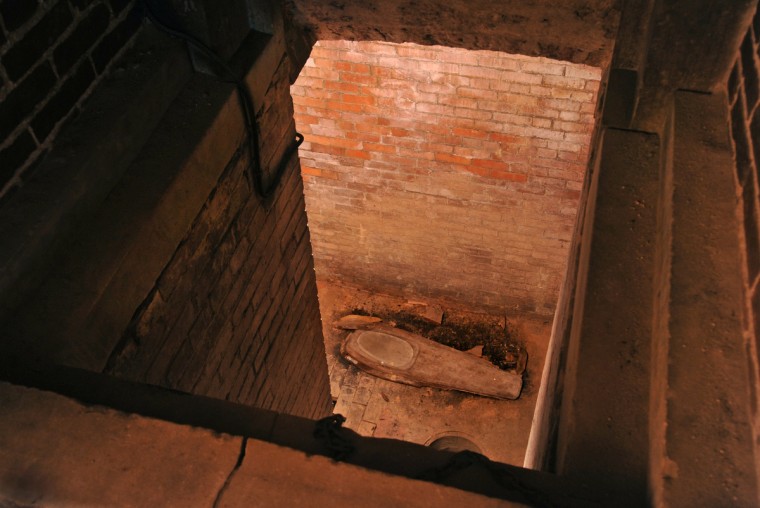 Inside the catacombs, peering down into the burial vault of the family of Joseph Williams, a Baltimore merchant, one can see a casket placed as prop. This is an unusually deep vault, and the family members were moved elsewhere, probably to the more fashionable Greenmount Cemetery. Amy Davis / Baltimore Sun 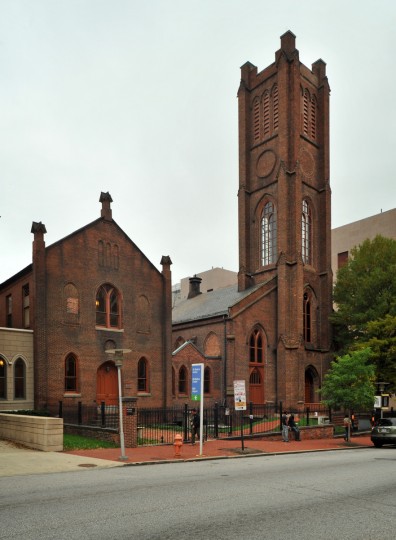 The exterior of Westminster Hall and Rectory, a Gothic Revival church completed in 1852, seen from W. Fayette Street looking southwest. The church was in use until 1977. It is now in the care of the Westminster Preservation Trust, Inc., a non-profit organization under the auspices of the University of Maryland School of Law. Amy Davis / Baltimore Sun 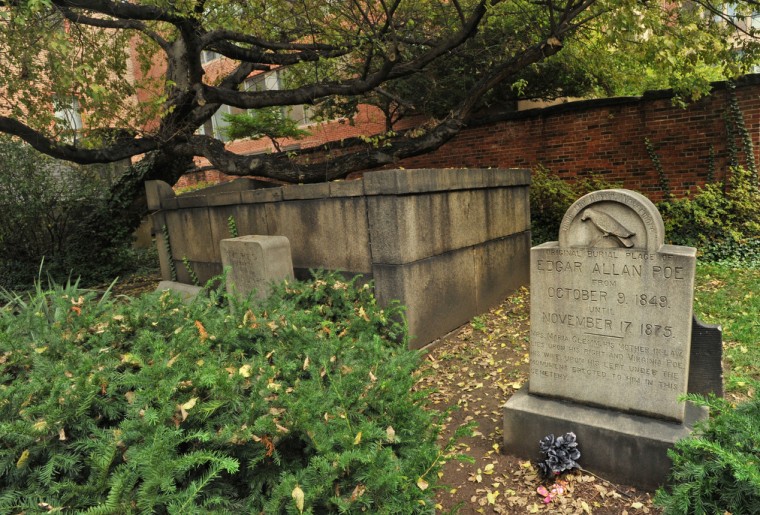 An earlier marker for Edgar Allan Poe is at the south end of the cemetery in the Poe family plot. Poe’s remains, as well as those of his wife Virginia and mother-in-law, Maria Clemm, were re-interred under the more prominent marble monument to Poe at the northwest corner of the cemetery. Amy Davis / Baltimore Sun 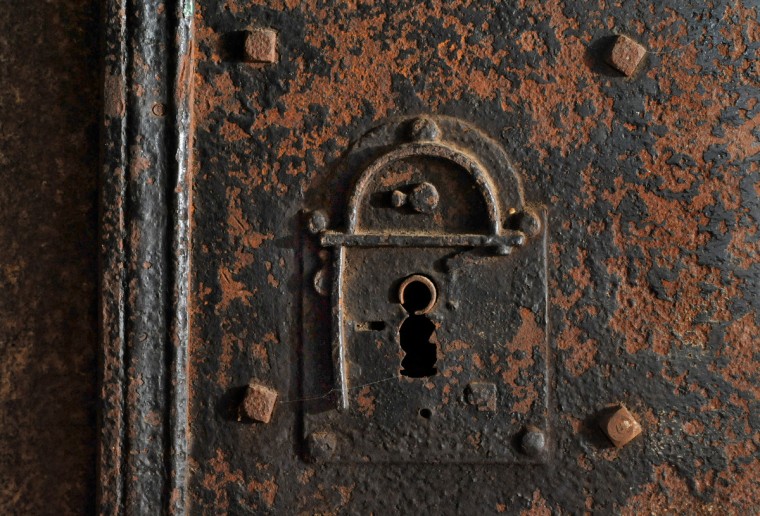 In the catacombs, a rusted lock shows the age of the McClellan vault, which contains the remains of 25 members of the McClellan, Raborg and Wagner families. Samuel McClellan was a Baltimore merchant who served on the Baltimore City Council and was a veteran of the War of 1812. Amy Davis / Baltimore Sun 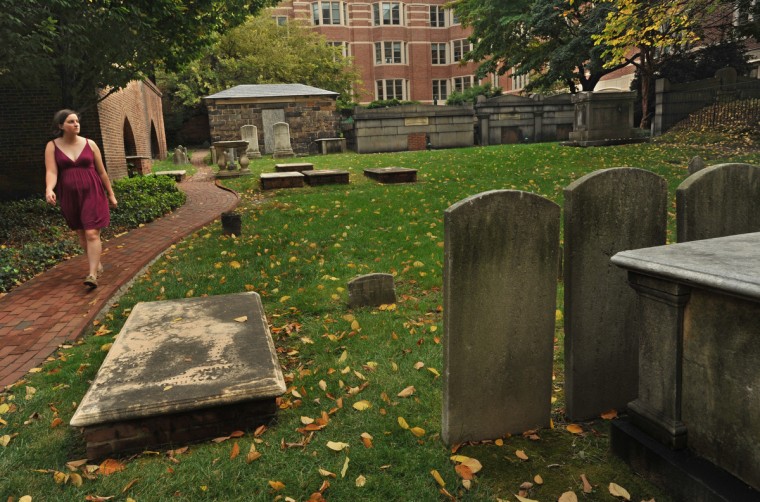 Ashley Channels of Washington, D.C., left, visits the Westminster Burying Ground. This is the south side of the cemetery. Amy Davis / Baltimore Sun 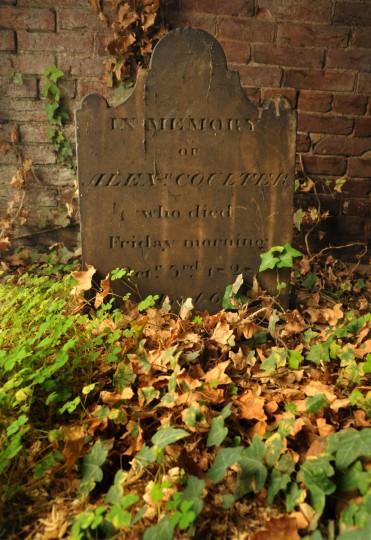 A marker for Alexander Coulter, who died in 1828, is inside the catacombs, but below the porch along the perimeter where ivy has crept in around the grave. Coulter was a saddler who died at age 68. Amy Davis / Baltimore Sun 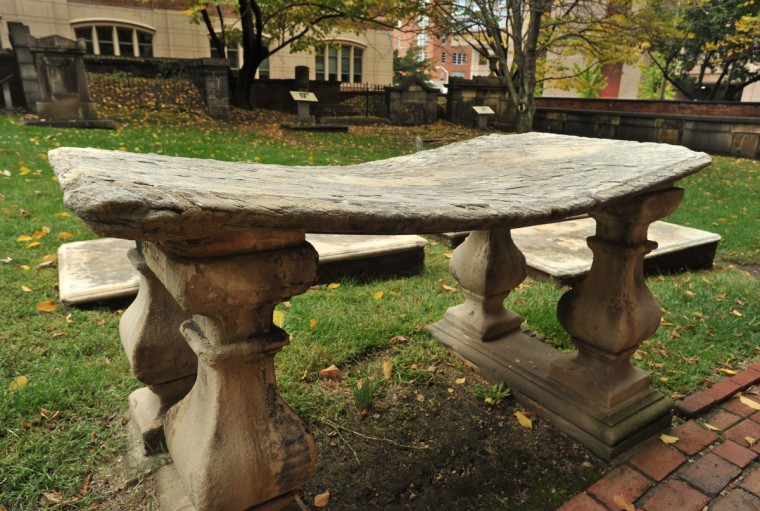 The curvature of this raised slab, originally part of a lot belonging to William Matthews, a merchant who served in the Revolutionary War, shows how the elements and pollution erode the stone tablets. Amy Davis / Baltimore Sun 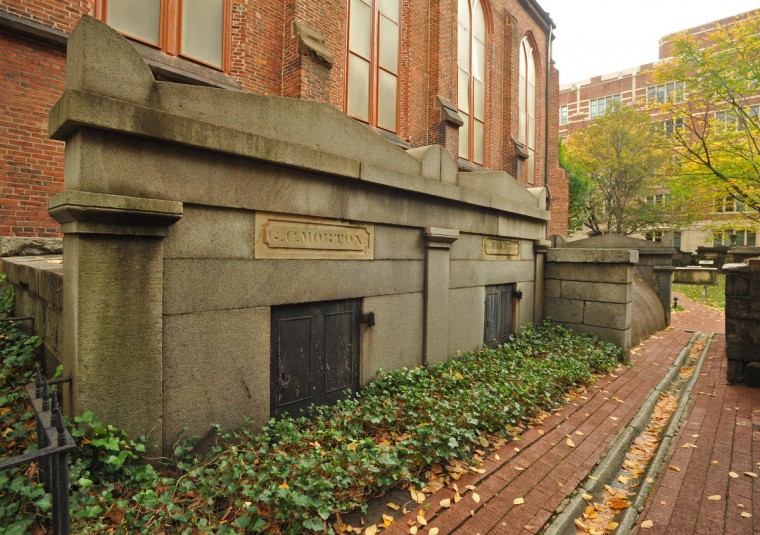 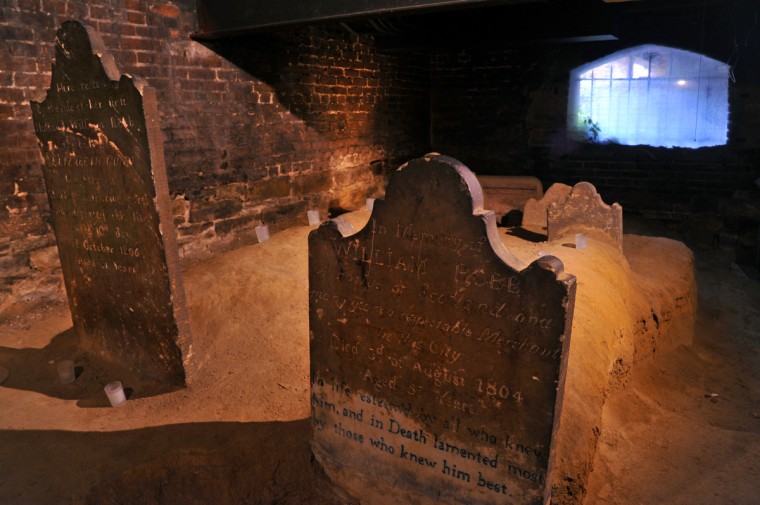 A pair of gravestones in the catacombs for Elizabeth Gunn, left, who died in 1806, and her first husband, William Robb, who died in 1804. The inscription for William Robb describes him as “a native of Scotland and many years a respectable Merchant in this city.” He died at 53. Amy Davis / Baltimore Sun 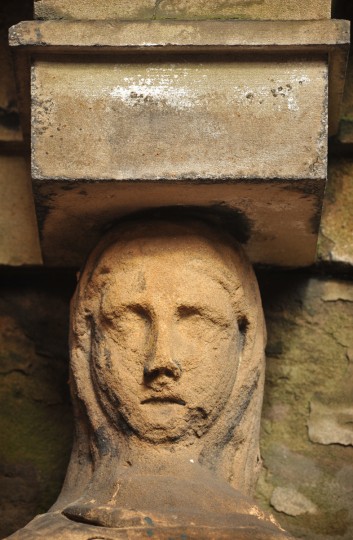 One of two worn sandstone female heads on the O’Donnell vault, atop columns supporting the entablature. Amy Davis / Baltimore Sun 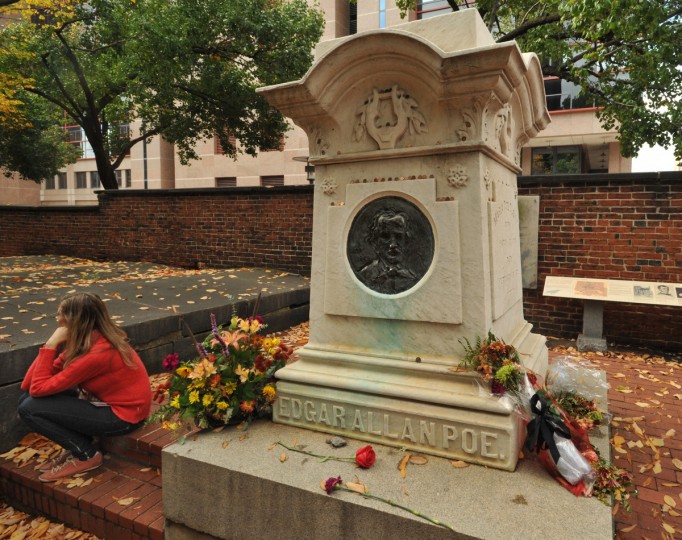 Lenka Slachtova, a researcher at the University of Maryland School of Pharmaceutical Sciences, takes a break near the Poe monument. The burial grounds that surround Westminster Hall are open to the public during daylight hours. Amy Davis / Baltimore Sun 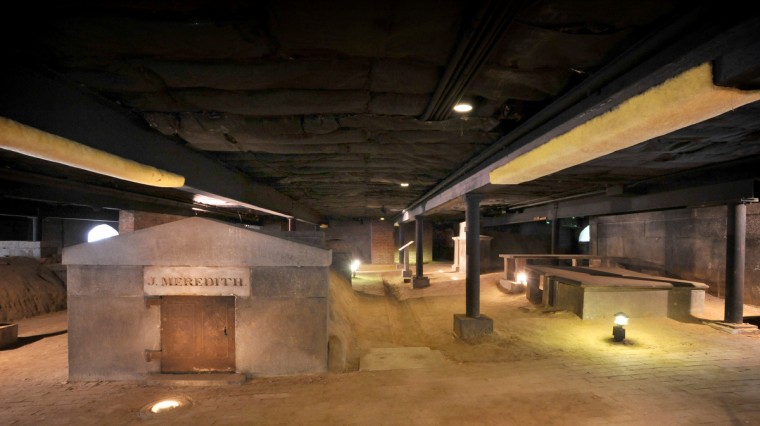 Looking north toward Fayette Street from the south end of the catacombs. At left is the burial vault for the Jonathan Meredith family. The low beams above passageways are covered with carpeting to avoid painful bumps to the head. Amy Davis / Baltimore Sun 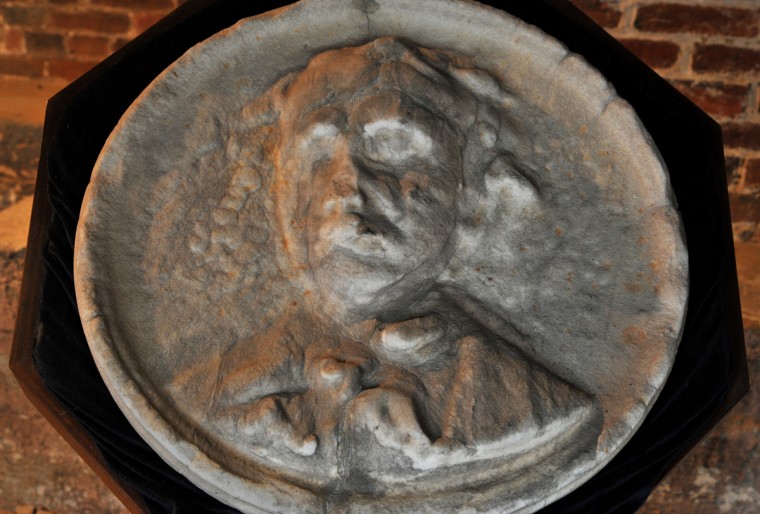 The original bas relief depicting Edgar Allan Poe that adorned his monument in the Westminster Burying Ground is now on display in the catacombs. A poor grade of marble added to the disintegration caused by the elements, acid rain and rough handling. Amy Davis / Baltimore Sun 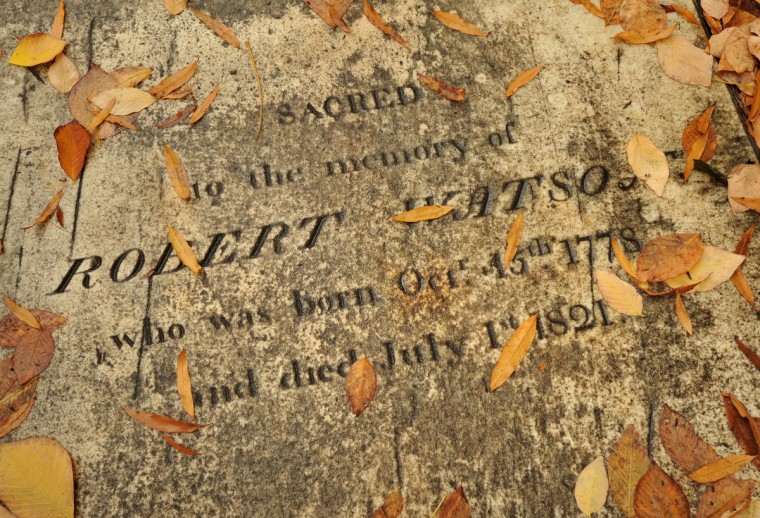 The stone slab for Robert Watson, a Baltimore merchant, is near the Poe monument. The historic Westminster Burying Ground and Catacombs, on W. Fayette Street at the corner of N. Green Street, can be seen during the annual Halloween Tour on Oct. 31, from 6 to 9 p.m. Amy Davis / Baltimore Sun 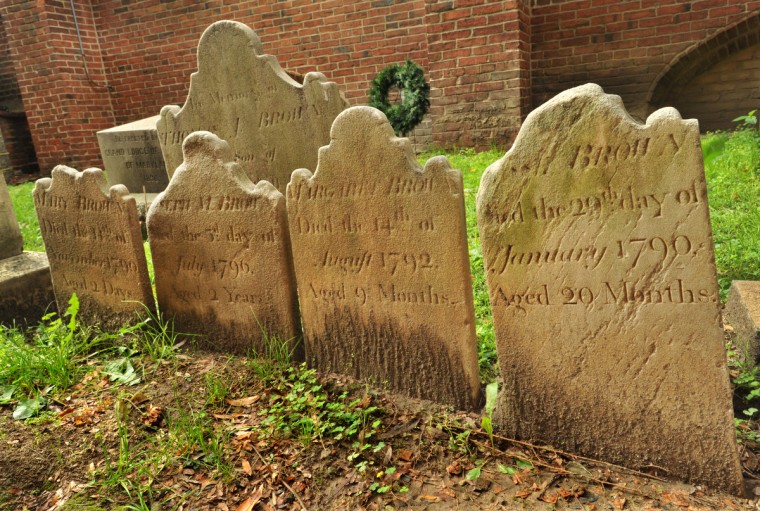 The high infant mortality rate in the 18th century is evident by the graves for four of the children of Sarah and John Brown. The inscriptions read, from left: 2 days, 2 years, 9 months and 20 months. Sarah Brown gave birth to ten children; six died young. Behind these markers is the tombstone for their father, John Brown, 1745 – 1794. Amy Davis / Baltimore Sun 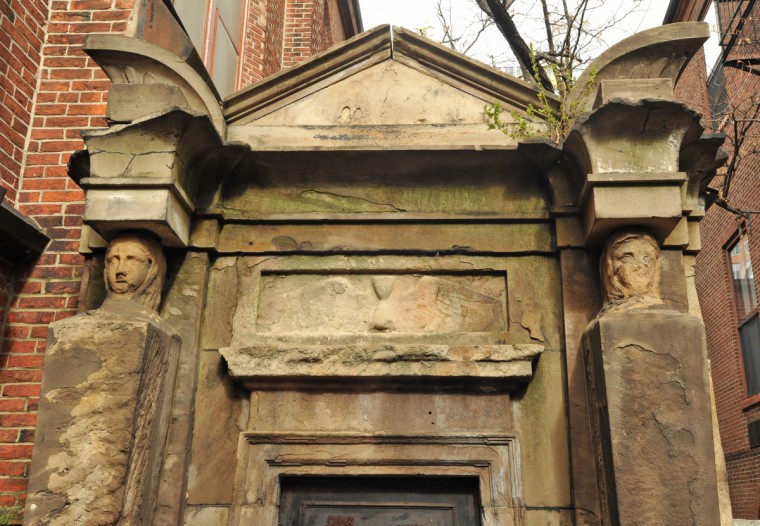 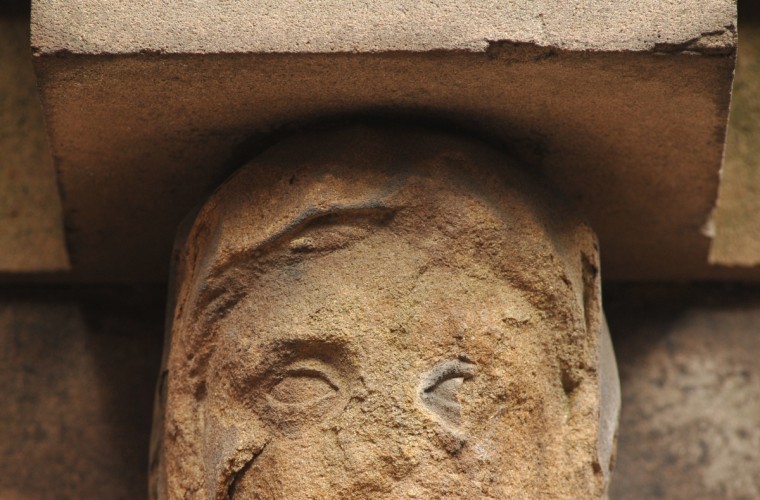 The eyes on a badly weathered sandstone head, one of two on the O’Donnell vault, still show an Egyptian influence in the design by French architect Maximilian Godefroy. Amy Davis / Baltimore Sun 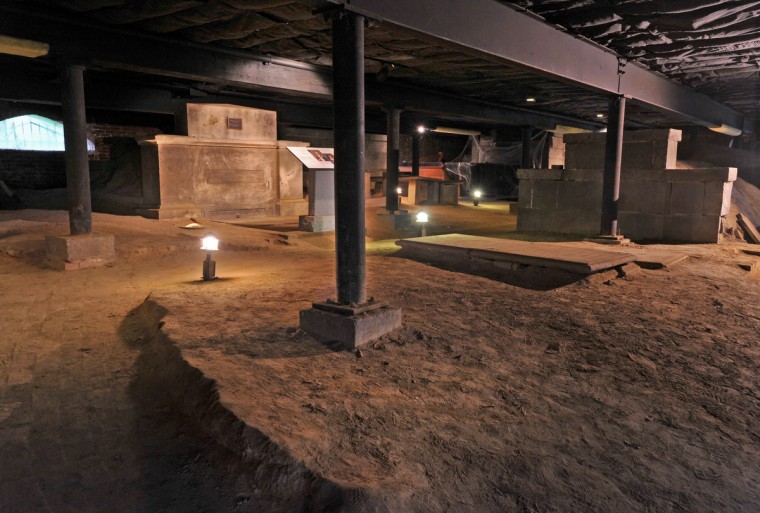 The prominent crypt of the Swan family can be seen in back at left in this view of the catacombs. Steel beams were added to the two original wooden support beams under the church structure when Westminster Hall was renovated in 1983. Amy Davis / Baltimore Sun 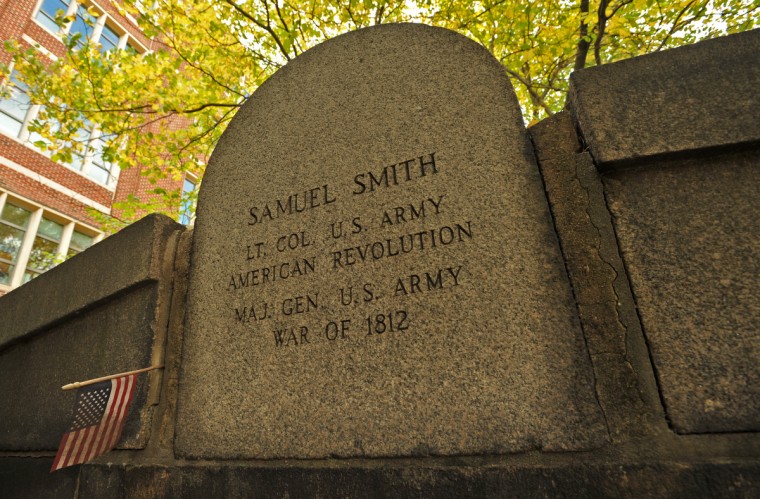 The vault for Samuel Smith, 1752-1839, is inscribed with his service in the Revolutionary War and as the Major General in charge of the defense of Baltimore in the War of 1812, but Smith was also a U.S. Congressman, Senator and a Mayor of Baltimore City. Amy Davis / Baltimore Sun 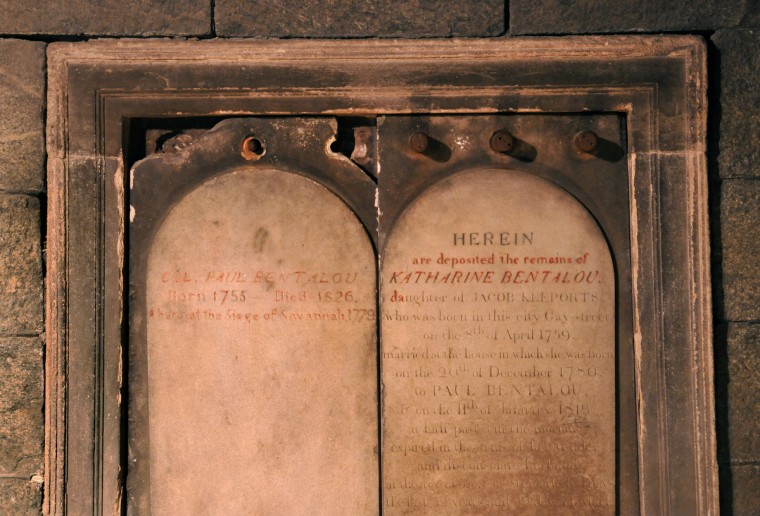 The c. 1813 crypt for Paul Bentalou and his wife Katherine has a touching inscription about her death, which reads in part, “Katherine Bentalou…expired in the arms of her tender and disconsolate husband…” Paul Bentalou was a Frenchman who came here to join the fight for independence. His tablet on the front of the burial vault, left, is simply inscribed: “A hero at the siege of Savannah 1779.” Amy Davis / Baltimore Sun 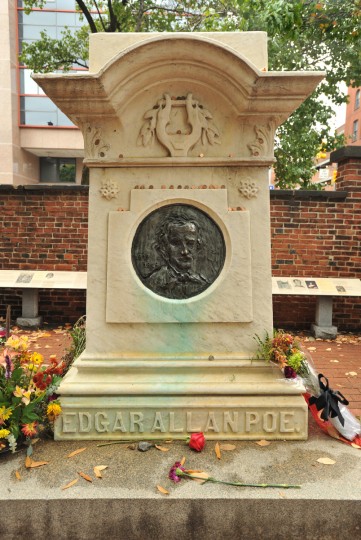 Edgar Allan Poe is buried with his wife Virginia and her mother, Maria Clemm under the marble monument carved by local stonemason Hugh Sisson. This monument at Westminster Burying Ground can be seen from the corner of W. Fayette and N. Greene Streets. Poe’s remains were moved from the Poe family plot in another part of the cemetery when money was raised by schoolchildren and others for this 1875 memorial. Amy Davis / Baltimore Sun 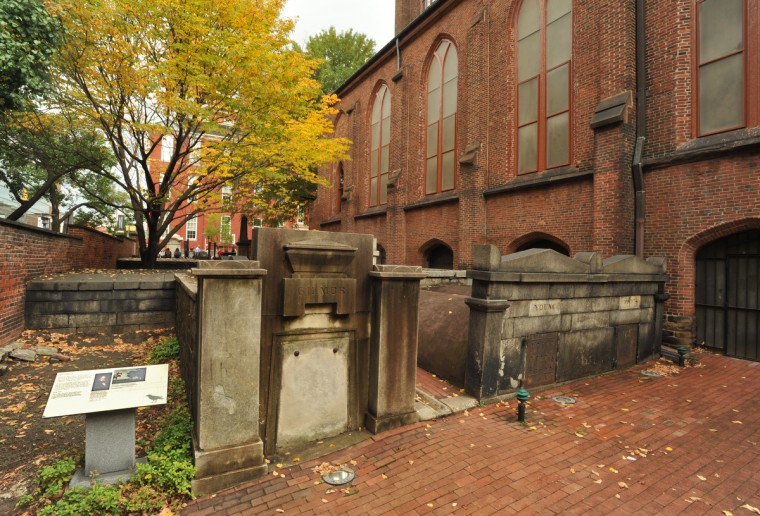 On the western side of the burial ground that runs along N. Greene Street is the Gilmor vault, c. 1812-1821. Sixteen Gilmor family members, and their family nurse, an African-American named Patience Marsh, were buried here until 1885, when their remains, including the nurse, were moved to Greenmount Cemetery. Robert Gilmor was a prominent merchant. Amy Davis / Baltimore Sun 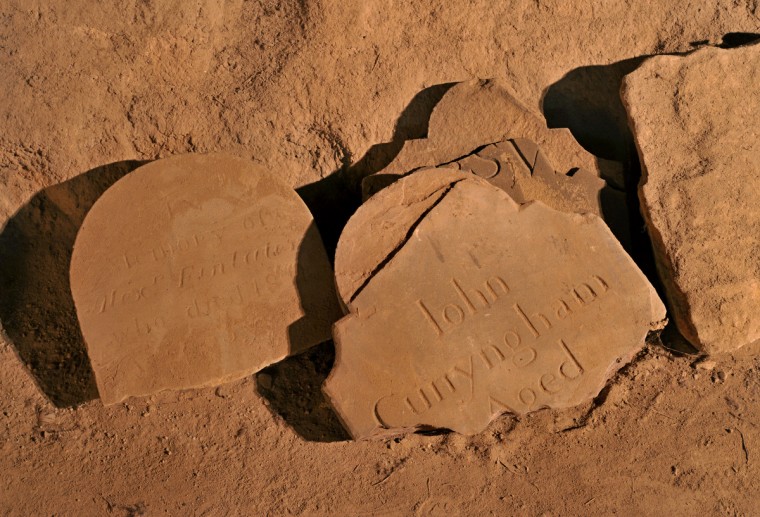 Fragments of tombstones rest on the dirt floor of the catacombs, protected from the elements that have weathered the above ground grave markers. Other tombstones for the Cunyngham family are outside. Amy Davis / Baltimore Sun

The Westminster Burying Ground and Catacombs is holding its annual Halloween Tour on October 31, from 6 to 9 p.m. Descend to the catacombs, then visit the Poe monument for readings of his classic tales. General John Stricker, an inhabitant of the graveyard, may wander by. A visiting guest artist, Count Dracula, will play eerie music on the 1882 Johnson pipe organ in Westminster Hall. The outdoor graveyard is open to the public during daylight hours. However, the catacombs can only be seen with a tour guide or during special programs, such as this Halloween event.

When the old “Western Burying Grounds” was established in 1786 by the First Presbyterian Church, its location was on the outskirts of the city. Nearby Lexington Market consisted of farmers who set up their horse-drawn wagons in fields. As the city grew, the congregation built a Gothic Revival church in 1852, constructed on brick arches over a portion of the cemetery, thus creating the catacombs. The congregation used the church until 1977. Today the church, known as Westminster Hall, is operated by the non-profit Westminster Preservation Trust, Inc., under the auspices of its neighbor, the University of Maryland Francis King Carey School of Law.

For more information on visiting Westminster Hall, call 410-706-7228 or go to westminsterhall.org

« A duke’s funeral, a rhino’s baby, a bridge from peak to peak | Oct. 24 » A Halloween surf contest, Serena Williams smashes her racquet and a costume contest for the dogs | Oct. 25