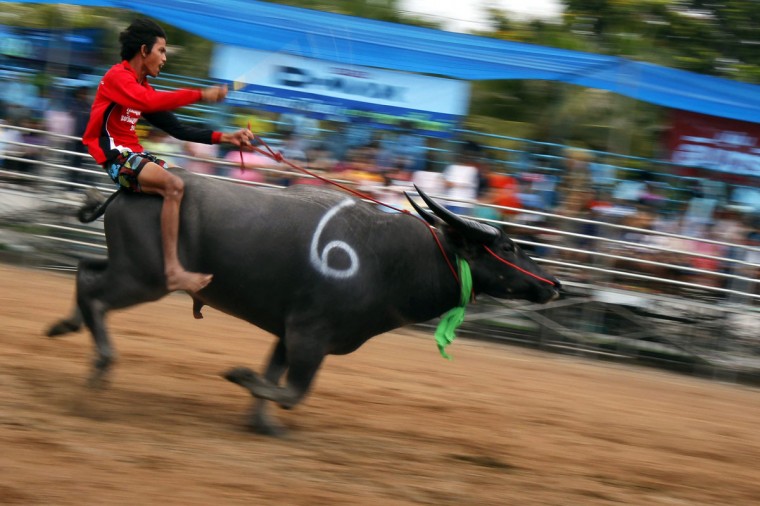 A jockey competes in Chonburi’s annual buffalo race festival, east of Bangkok, October 7, 2014. The event, which also celebrates the rice harvest, dates back to the buffalo trade in Chonburi, once the commercial centre of Thailand’s east. (REUTERS/Chaiwat Subprasom) 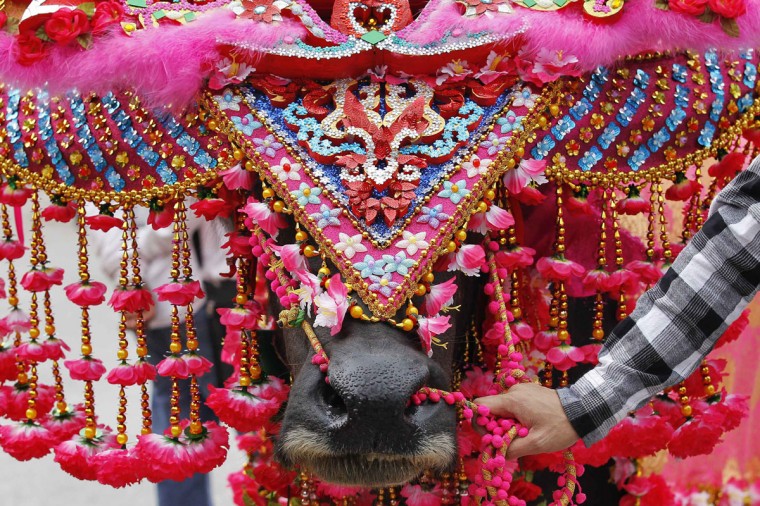 A farmer leads a decorated buffalo as he arrives for Chonburi’s annual buffalo race festival, east of Bangkok, October 7, 2014. The event, which also celebrates the rice harvest, dates back to the buffalo trade in Chonburi, once the commercial centre of Thailand’s east. (REUTERS/Chaiwat Subprasom) 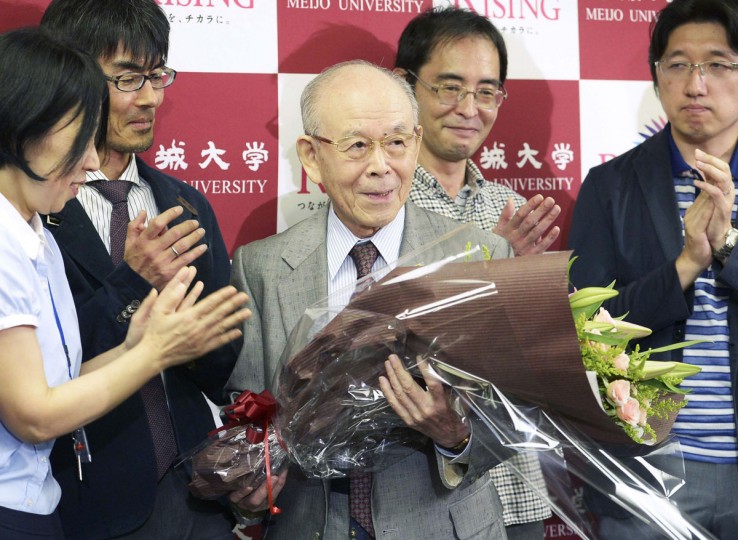 Meijo University professor Isamu Akasaki (C) is presented with a bouquet of flowers from his laboratory staff members during a news conference at Meijo University in Nagoya, central Japan, in this photo taken by Kyodo October 7, 2014. Japanese scientists Akasaki and Hiroshi Amano and American Shuji Nakamura won the 2014 Nobel prize for Physics for inventing a new energy efficient and environmentally friendly light source, the LED, the award-giving body said on Tuesday. Mandatory credit (REUTERS/Kyodo) 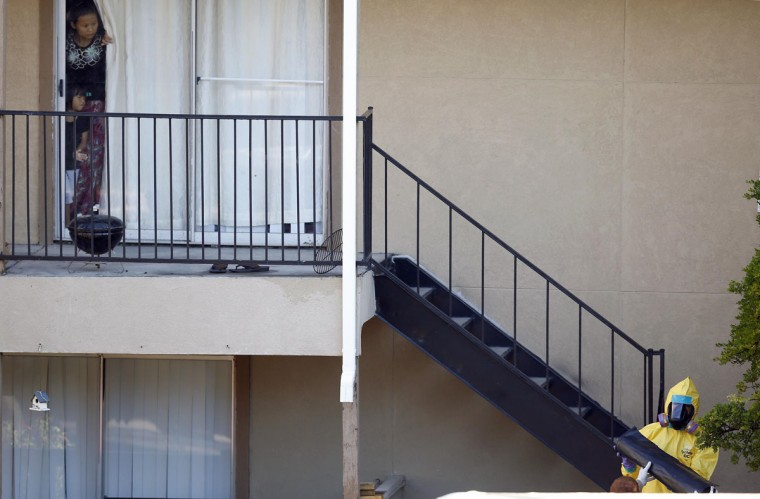 Neighboring people watch a man in a hazardous material suit work on cleaning the apartment unit where a man diagnosed with the Ebola virus was staying in Dallas, Texas, October 6, 2014. Thomas Eric Duncan, the first person to develop Ebola in the United States, was struggling to survive at a Dallas hospital heightening concerns of the worst Ebola epidemic on record and has killed more than 3,400 people. (REUTERS/Jim Young) 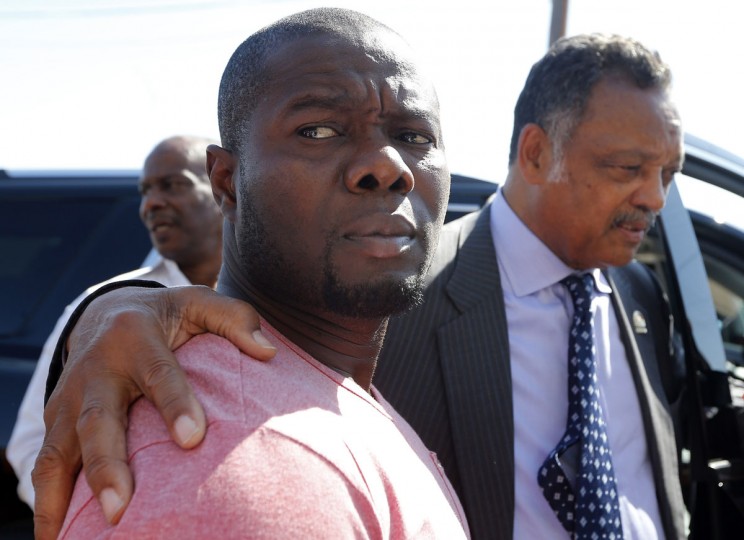 Reverend Jesse Jackson (R) puts his arm around Josephus Weeks, the nephew of Thomas Eric Duncan, the first patient diagnosed with Ebola on U.S. soil, in Dallas, Texas October 7, 2014. Duncan remains in critical condition, he is on a ventilator and receiving kidney dialysis, the Dallas hospital treating him said on Tuesday. (REUTERS/Jim Young) 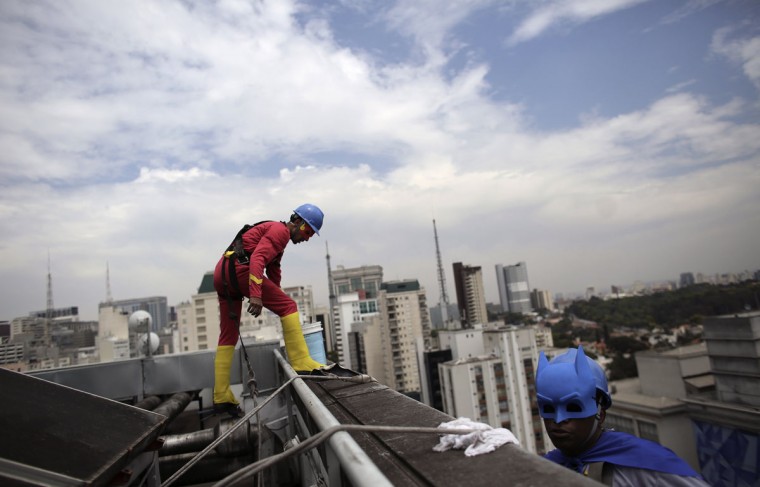 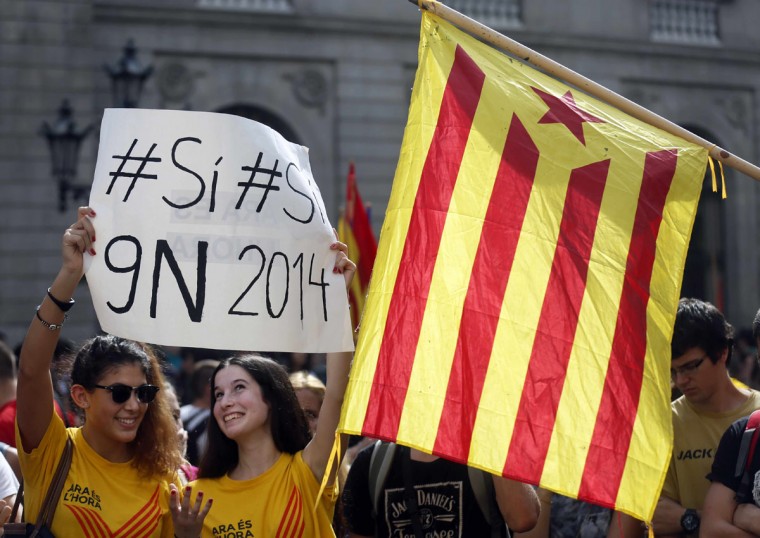 Students hold a banner reading “Yes, Yes. November 9, 2014” during a protest in support of the independence referendum at Sant Jaume square in Barcelona October 7, 2014. The government of the northeastern Spanish region of Catalonia will decide by October 15 whether to push ahead with a contested referendum on separation from the rest of Spain, a spokesman said. Catalonia, with a population of 7.5 million people, its own language and accounting for a fifth of Spain’s economy, has long sought independence and was buoyed by the close result of last month’s referendum in Scotland. (REUTERS/Albert Gea) 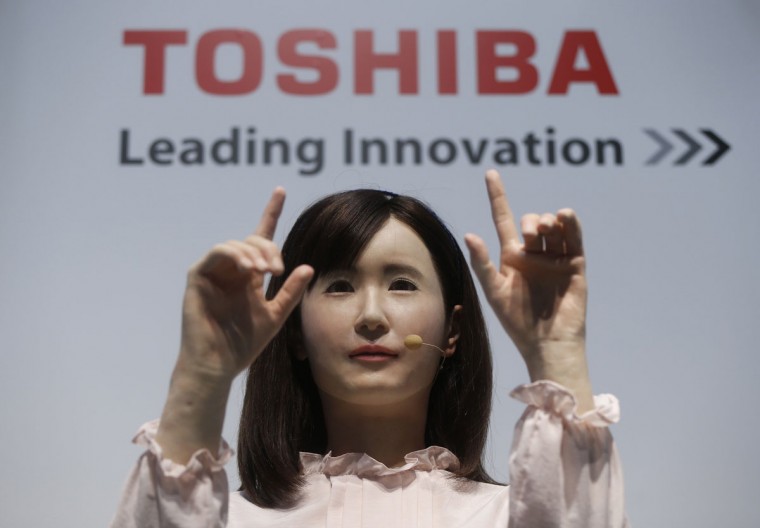 Toshiba Corp. demonstrates its communications android named Ms. Aiko Chihira that can use sign language and introduce itself, at the Combined Exhibition of Advanced Technologies (CEATEC) JAPAN 2014 in Chiba, east of Tokyo, October 7, 2014. Over 500 companies and organisations are exhibiting at CEATEC JAPAN 2014, which will be held until October 11, 2014. (REUTERS/Issei Kato) 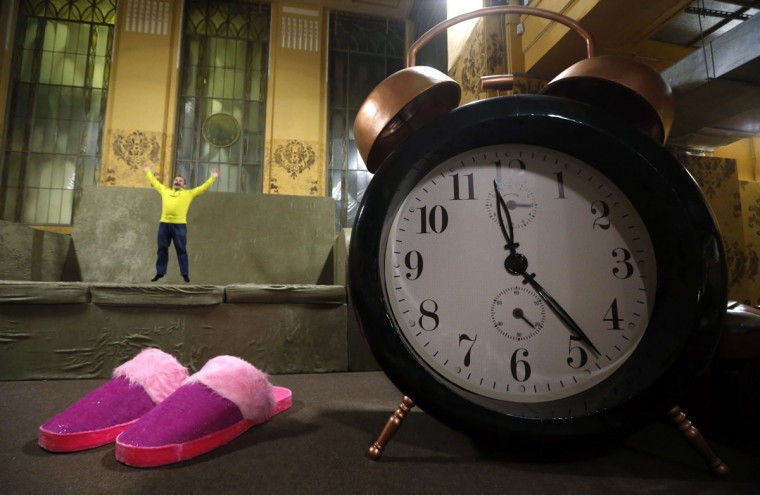 A visitor poses for a photograph at the Museum of Optical Illusions in St. Petersburg, October 7, 2014. The organisers of the museum offer their visitors a chance to become involved in their 3D installations, according to local media. (REUTERS/Alexander Demianchuk) 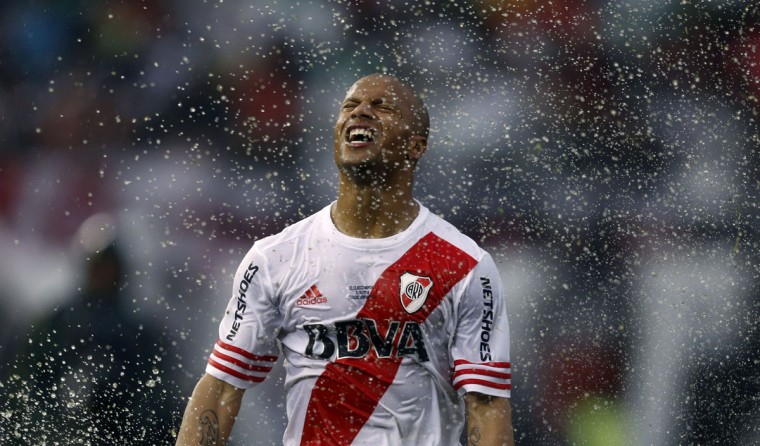 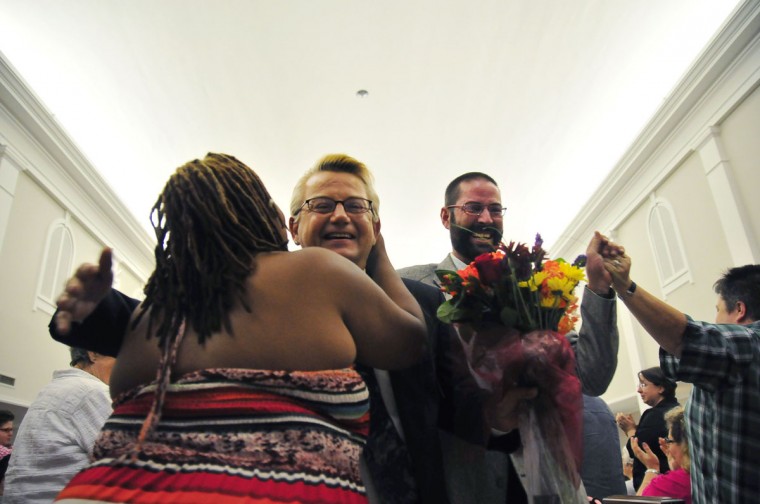 Newlyweds Bo Bass (C) and Kenny Wright embrace friends as they walk down the aisle at Mayflower Congregational Church in Oklahoma City, Oklahoma October 6, 2014. Dozens of gay and lesbian couples jumped into action on Monday in Virginia, Oklahoma, Utah, Wisconsin and Indiana after the Supreme Court rejected appeals in gay marriage cases in those five states. (REUTERS/Nick Oxford)

Students from Ayotzinapa Teacher Training College Raul Isidro Burgos hold pictures of missing students outside the General Attorney building in Chilpancingo, in Guerrero, October 7, 2014. Mexican President Enrique Pena Nieto vowed on Monday to hunt down those responsible for the apparent massacre of dozens of students in the southwest of the country that authorities say involved local security officials. The students went missing after they clashed with police in Iguala in Guerrero on Sept. 26. A mass grave was found near the town over the weekend, full of charred human remains. Guerrero’s attorney general, Inaky Blanco, said on Sunday that 28 bodies have been found at the site so far, and it is “probable” that some of the missing 43 students are among the remains found in the graves. (REUTERS/Jorge Dan Lopez) 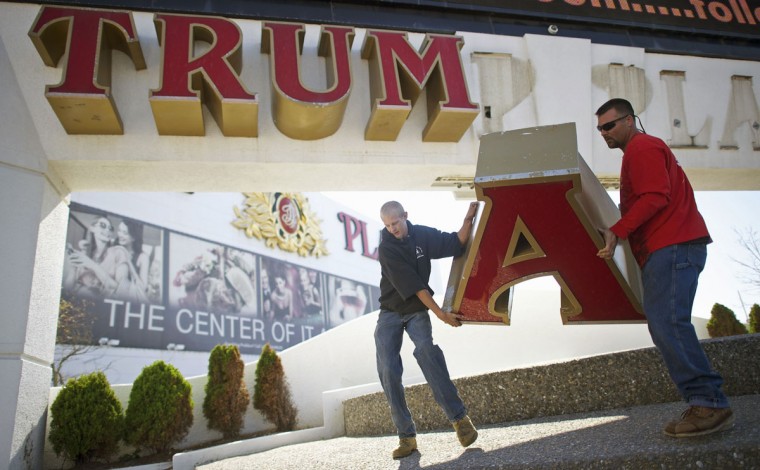 (L-R) Steven Nordaby and Tony Demidio, of Calvi Electric, remove the letter ‘A’ from the signage of Trump Plaza Casino in Atlantic City, New Jersey October 6, 2014. Workers began removing the large letters spelling out the Trump name from the shuttered Trump Plaza casino in Atlantic City on Monday after real-estate mogul Donald Trump sued to end a licensing deal that allowed the casino owners to use his name. Trump, who has emblazoned his name across properties in various U.S. cities, sued in August to have his name taken off the Trump Plaza, which closed last month, and the nearby Trump Taj Mahal, which is on the verge of closing. (REUTERS/Mark Makela) 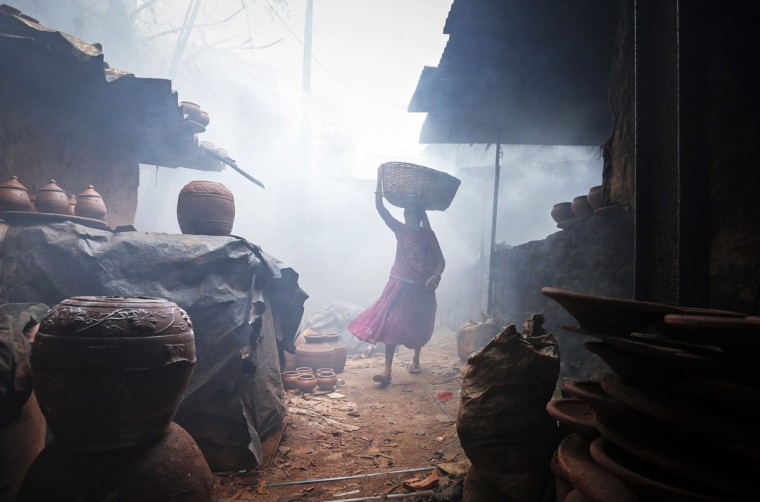 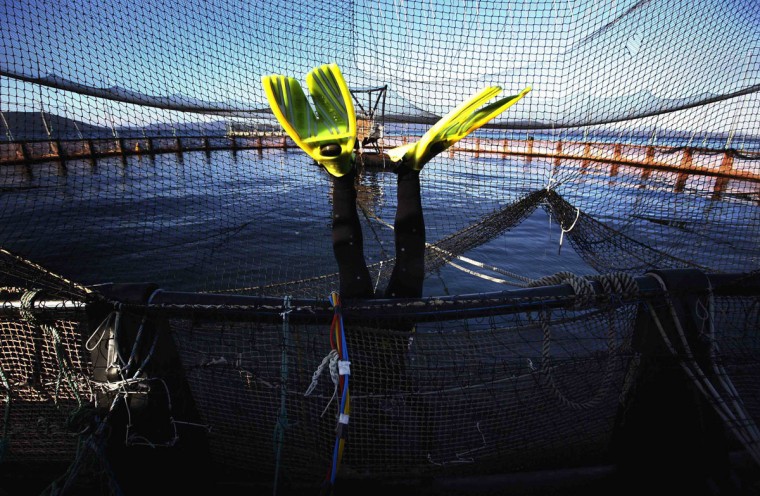 A diver leaps into a pond, which can hold up to 40,000 fish, during a daily inspection of the nets at a Tasmanian salmon farm owned by Huon Aquaculture Group Ltd located at Hideaway Bay, south of Hobart June 2, 2014. Huon Aquaculture Group Ltd, Australia’s second-largest salmon farmer, said it plans to raise A$133 million ($117 million) in a sharemarket listing in a bid to boost its share of the country’s fastest growing marine farming sector. The IPO makes Huon the southern state’s – and Australia’s – second listed salmon farmer after larger Tassal Group Ltd, which has been growing earnings since it decided to cut exports and focus on the strong domestic market. Picture taken June 2, 2014. To match story IPO-HUON/ (REUTERS/David Gray) 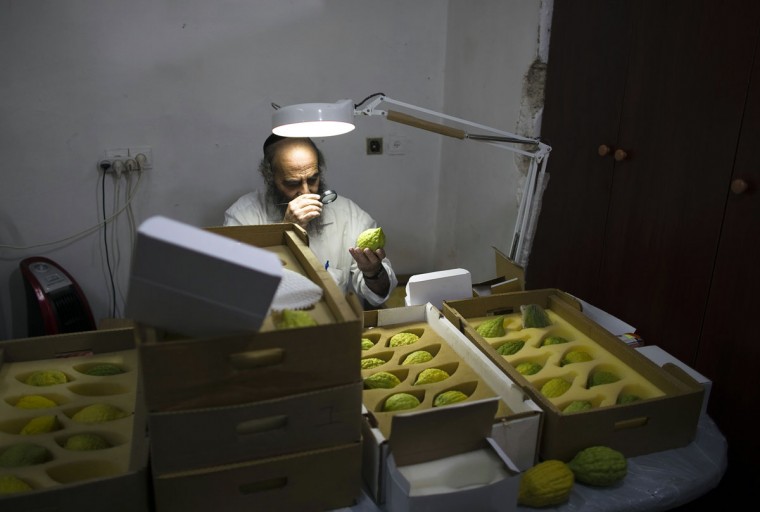 An ultra-Orthodox Jewish man checks etrogs, citrus fruits, for blemishes at a shop in Jerusalem’s Mea Shearim neighbourhood October 7, 2014. Etrogs are used in rituals during the Jewish holiday of Sukkot, which begins at sundown Wednesday. (REUTERS/Ronen Zvulun) 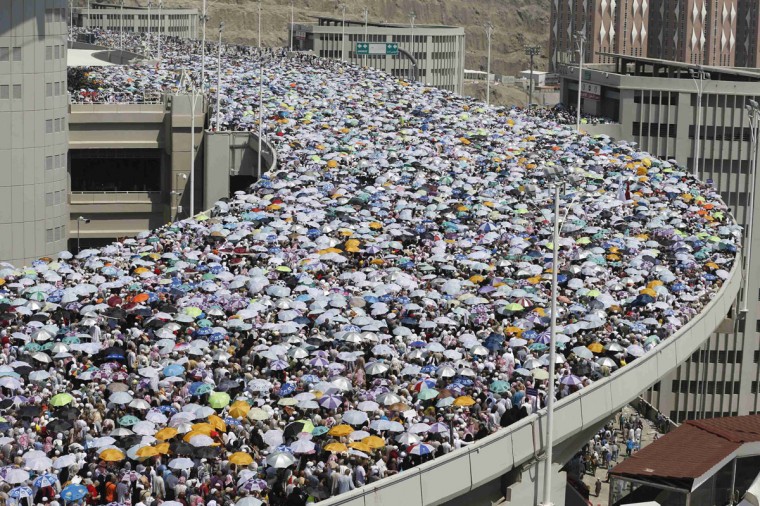 Muslim pilgrims walk on a bridge as they head to cast stones at pillars symbolizing Satan during the final day of the annual haj pilgrimage in Mina on the third day of Eid al-Adha, near the holy city of Mecca, October 6, 2014. Muslims around the world celebrate Eid al-Adha to mark the end of the haj pilgrimage by slaughtering sheep, goats, camels and cows to commemorate Prophet Abraham’s willingness to sacrifice his son, Ismail, on God’s command. (REUTERS/Muhammad Hamed) 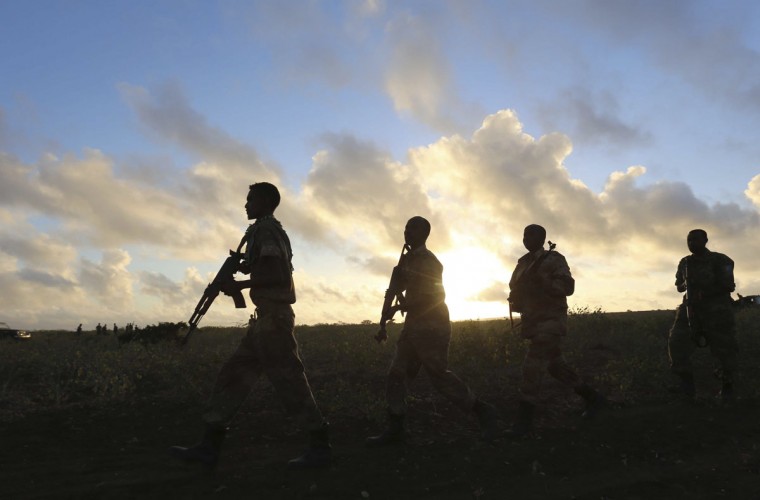 Somalia’s army soldiers make their way to the town of Barawe at dawn during the second phase of Operation Indian Ocean October 4, 2014. Somalia’s army and African troops deployed forces on Monday inside the strategic port which they retook from Islamist rebels at the weekend, promising residents they would be protected. The force of African Union peacekeepers and the Somali National Army said on Sunday they had driven out al Shabaab militants without a fight from Barawe, a stronghold used by rebels to ship in guns and generate cash from charcoal exports. Pictures taken October 4, 2014 (REUTERS/Feisal Omar)