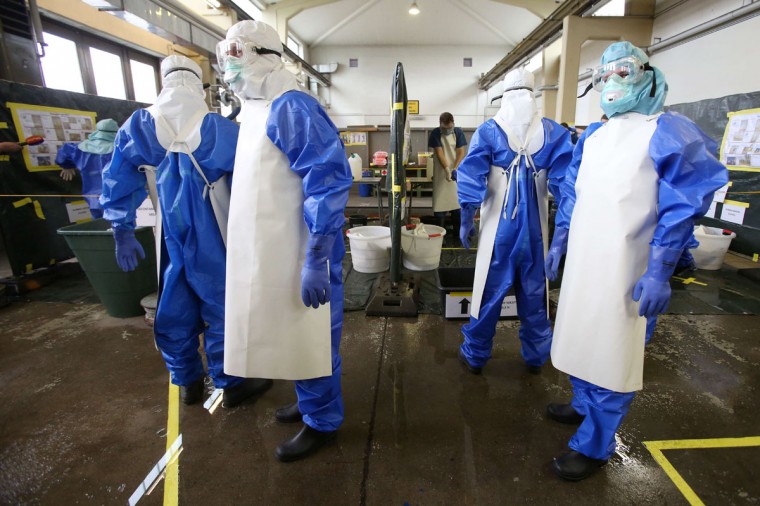 German volunteering soldiers wear protective equipment as they take part in an intensive course to prepare volunteer helpers for their deployment in Ebola-hit countries at the Marseille barracks of the German Armed Forces Bundeswehr in Appen near Pinneberg, northern Germany, on October 23, 2014. (BODO MARKS/AFP/Getty Images) 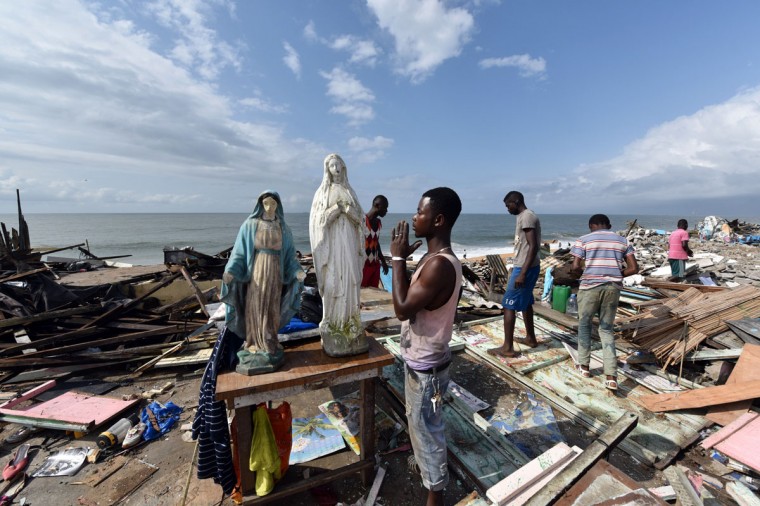 A man prays at the statue of the Virgin Mary amongst the debris of hundreds of destroyed homes, bulldozed during a clean-up operation of the coastal commune of Port Bouet, just east of Abidjan and west of Grand-Bassam, on October 23, 2014. (SIA KAMBOU/AFP/Getty Images) 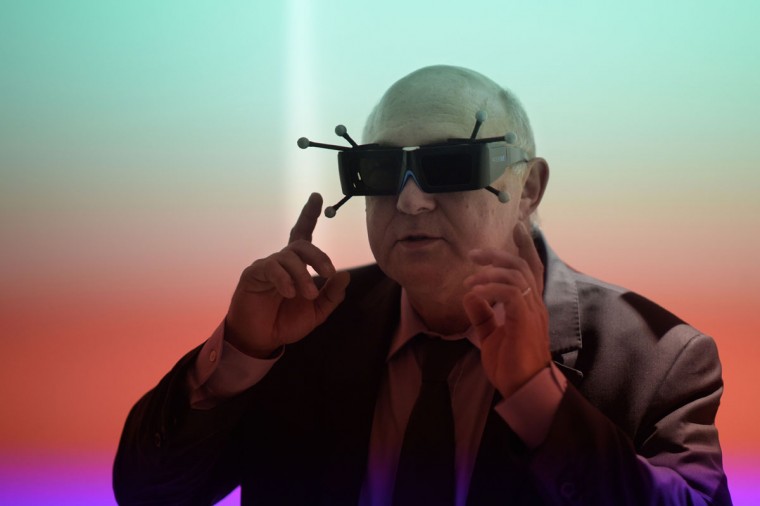 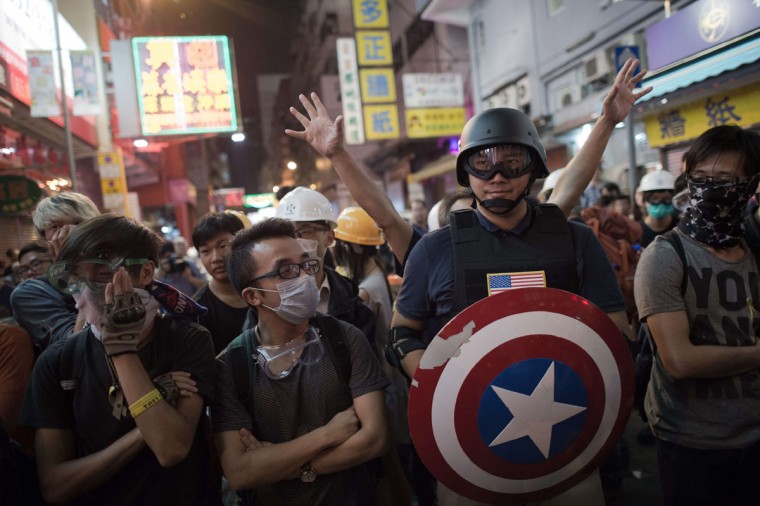 Pro-democracy protesters stand their ground on a barricaded road in the Mongkok district of Hong Kong on October 23, 2014. (NICOLAS ASFOURI/AFP/Getty Images) 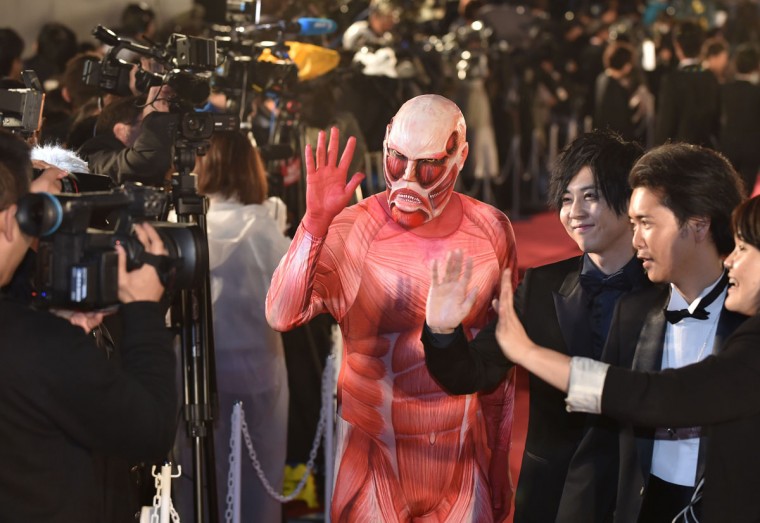 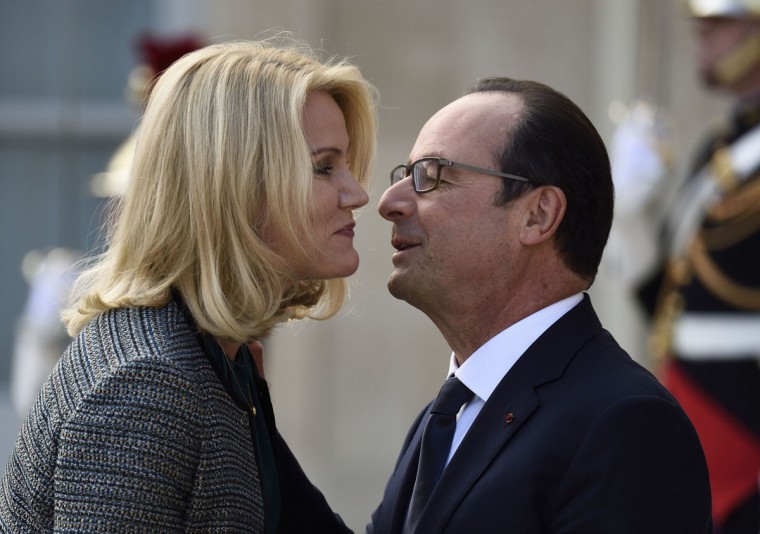 French President Francois Hollande greets Danish Prime Minister Helle Thorning-Schmidt upon her arrival for a meeting of EU Social Democrat leaders at the Elysee Palace in Paris on October 23, 2014 ahead of an EU summit in Brussels. (ERIC FEFERBERG/AFP/Getty Images) 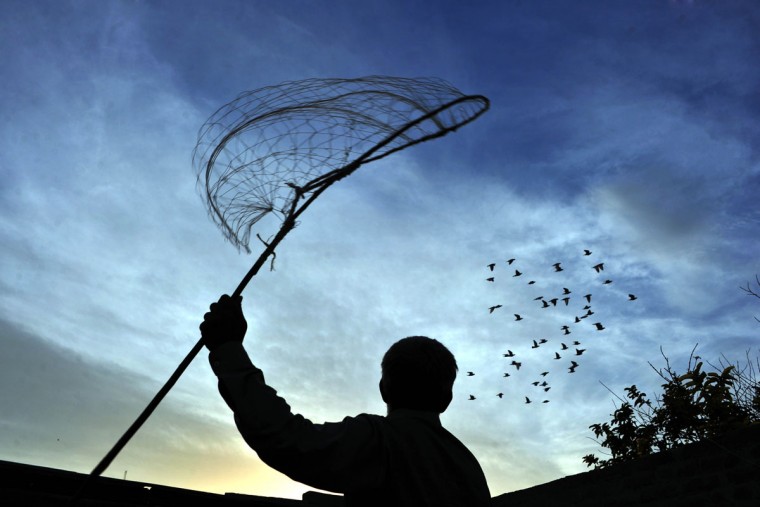 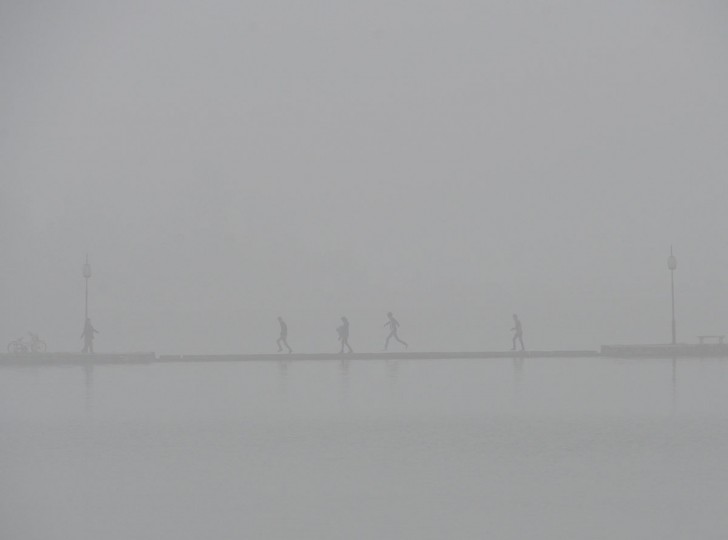 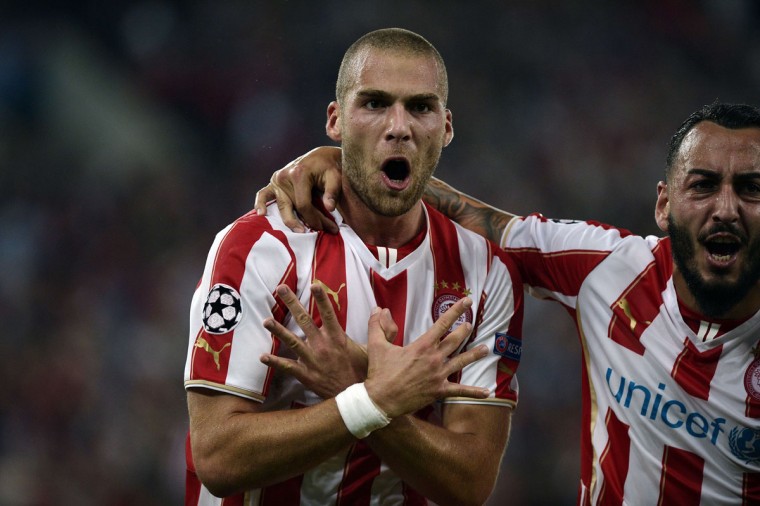 Pajtim Kasami celebrates after scoring a goal during the Group A Champions League football match Olympiacos vs. Juventus at the Karaiskaki stadium in Athens’ Piraeus district on October 22, 2014. (LOUISA GOULIAMAKI/AFP/Getty Images) 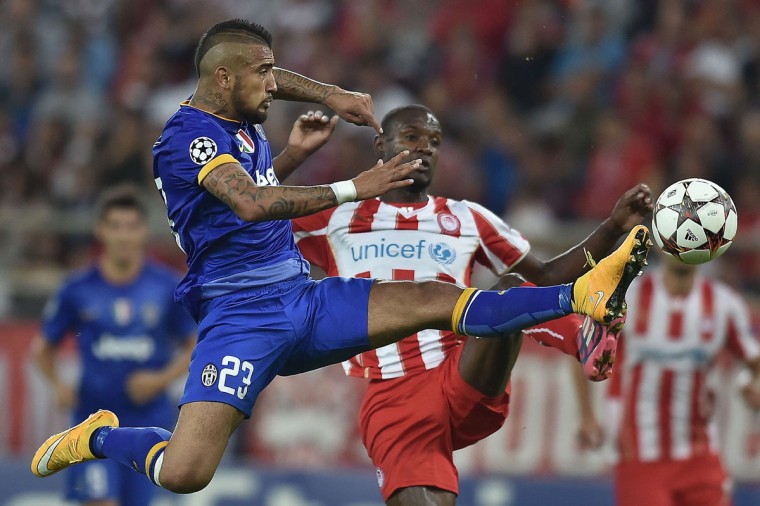 Juventus’ Arturo Vidal, left, fights for the ball with Olympiacos’ Eric Abidal during the Group A Champions League football match at the Karaiskaki stadium in Athens’ Piraeus district on October 22, 2014. (ARIS MESSINIS/AFP/Getty Images) 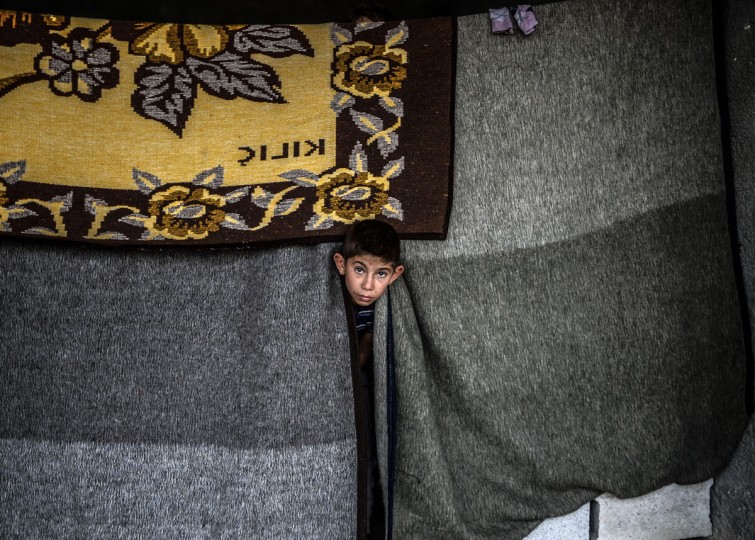 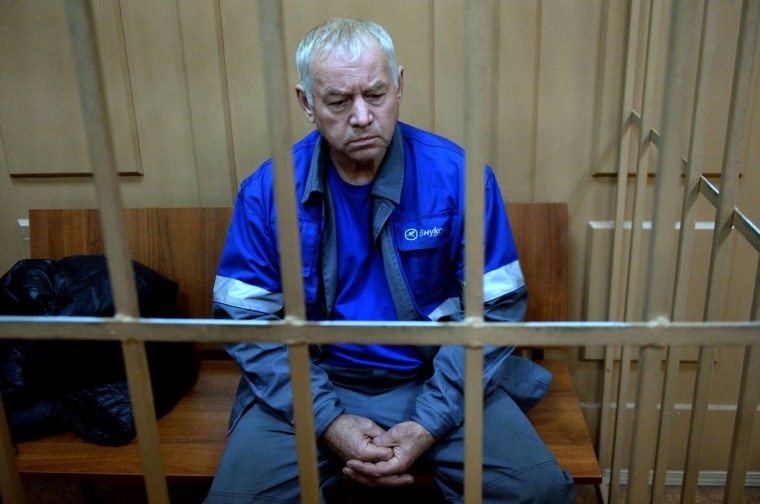 Vladimir Martynenko, the driver of a snowplough involved in the crash that killed the head of French oil giant Total, sits inside the defendant’s cage during his hearing in the Basmanny district court in Moscow on October 23, 2014. (VASILY MAXIMOV/AFP/Getty Images) 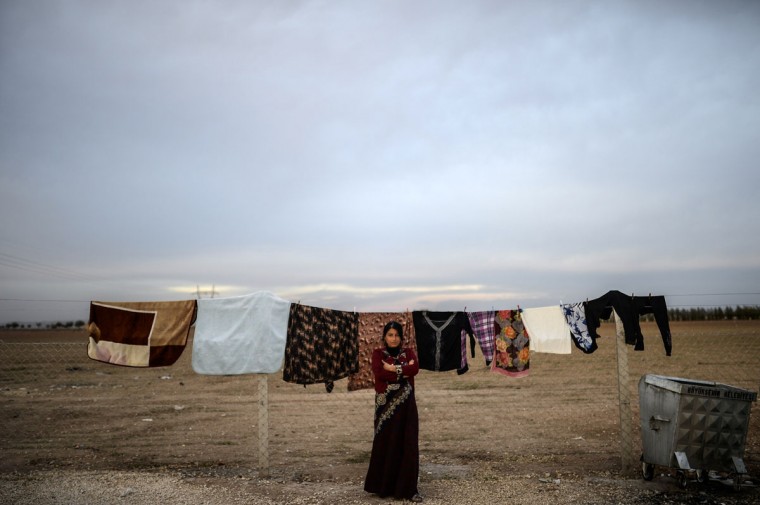 A Syrian Kurdish woman stands on October 23, 2014, in the Rojava refugee camp at Suruc in Sanliurfa province. Turkey said on October 21 that Kurdish peshmerga fighters based in Iraq have yet to cross into Syria from Turkish territory, a day after announcing it was assisting their transit to join the battle for the Syrian town of Kobane, also known as Ain al-Arab. It was seen as a major switch in policy by Turkey, which until now has refused to interfere in the over month-long battle for Kobane between Syrian Kurdish fighters and Islamic State (IS) jihadists. (BULENT KILIC/AFP/Getty Images) 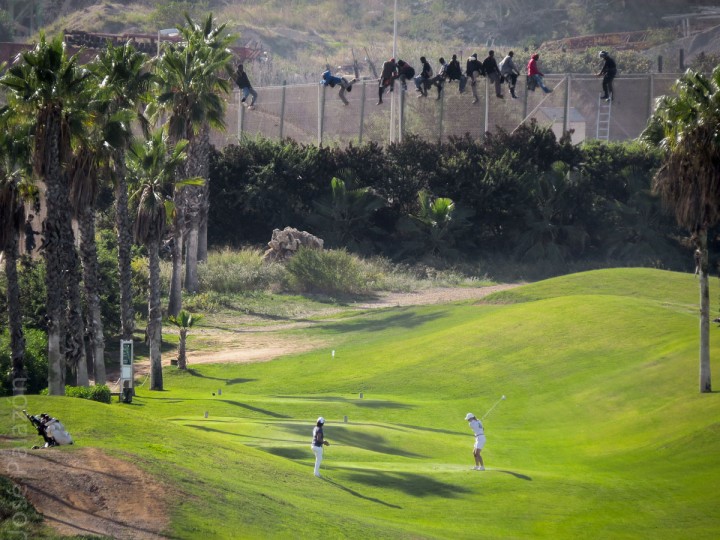 This handout picture released on October 22, 2014 by local humanitarian group Prodein shows golfers playing from a fairway back-dropped by African migrants sitting atop a border fence during an attempt to cross into the Spanish north African enclave of Melilla. (JOSE PALAZON OSMA/AFP/Getty Images) 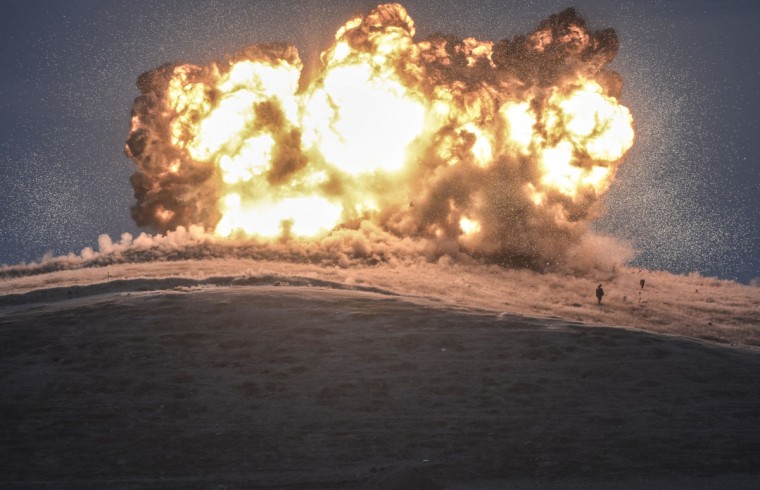 Militants of Islamic State (IS) stand just before explosion of an air strike on Tilsehir hill near Turkish border on October 23, 2014, at Yumurtalik village, in Sanliurfa province. Turkish President Recep Tayyip Erdogan that 200 Iraqi Kurd peshmerga fighters would travel through Turkey to the flashpoint Syrian border town of Kobane under assault by the Islamic State group. (BULENT KILIC/AFP/Getty Images)