An “Alien Samurai” robot, a drone invades a soccer match, migrants on the Spanish fence | Oct. 15 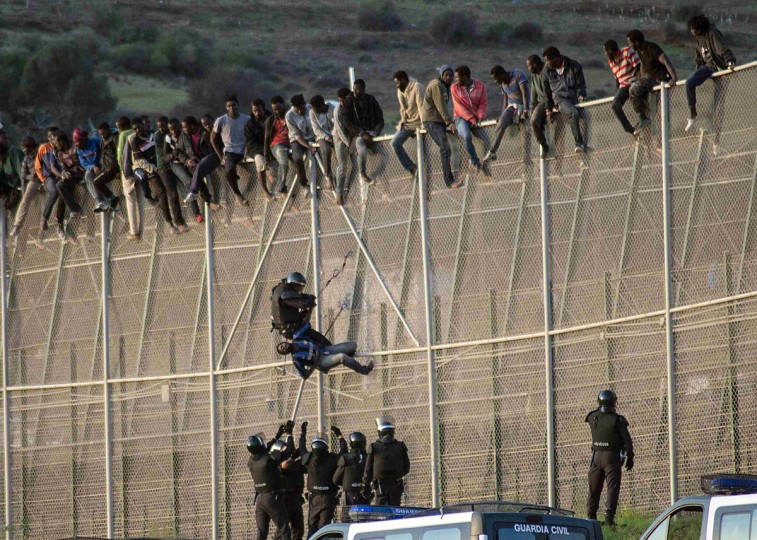 A Spanish Civil Guard pulls an African migrant from a border fence, as Spanish Civil Guard officers stand underneath, during an attempt to cross into Spanish territories, between Morocco and Spain’s north African enclave of Melilla October 15, 2014. Around 300 migrants attempted to cross the border into Spain and about 3 managed to pass the fence and are currently held at CETI, the short-stay immigrant centre, according to local authorities. (REUTERS/Jesus Blasco de Avellaneda) 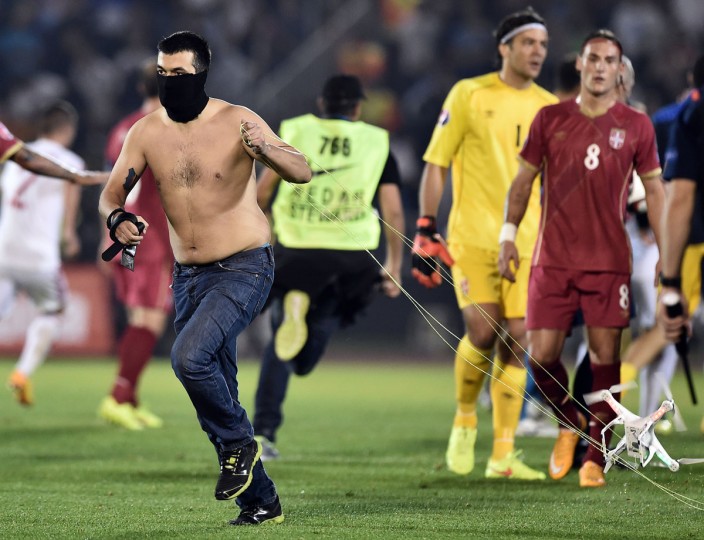 A masked Serbian supporter pulls a drone after a flag with Albanian national symbols was flown over the pitch and pulled down by Serbia’s players during the EURO 2016 group I football match between Serbia and Albania in Belgrade on October 14, 2014. (AFP PHOTO/Getty Images/Andrej Isakovic) 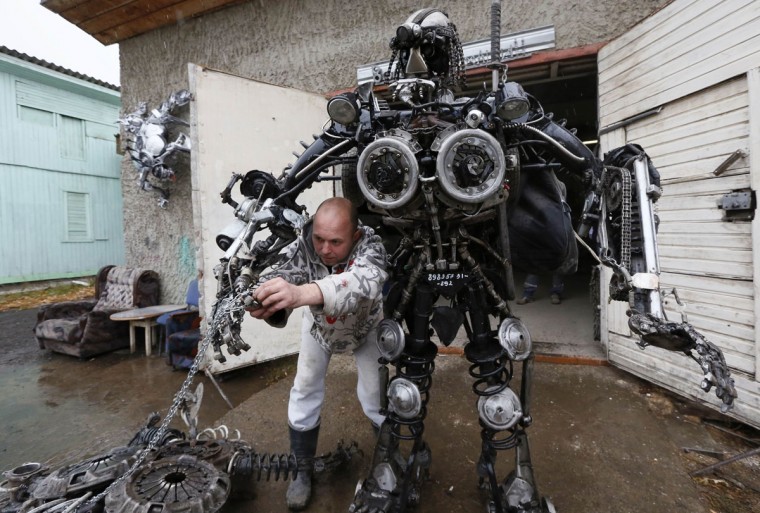 Mechanic and welder Sergei Kulagin, 32, tests the “Alien Samurai”, an electro-mechanical mobile robot made by Kulagin using car components, outside an automobile repair workshop in the town of Divnogorsk outside Krasnoyarsk, Siberia, October 15, 2014. Enthusiast Kulagin, who works as a mechanic of an automobile service station, created about twenty sculptures made of used car parts and components during his non-working hours. (REUTERS/Ilya Naymushin) 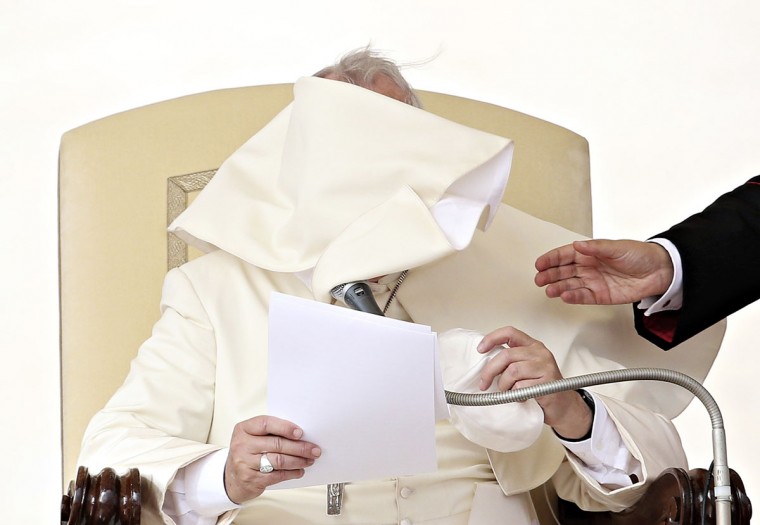 A gust of wind blows Pope Francis’ mantle as he leads his weekly audience in Saint Peter’s Square at the Vatican October 15, 2014. (REUTERS/Alessandro Bianchi) 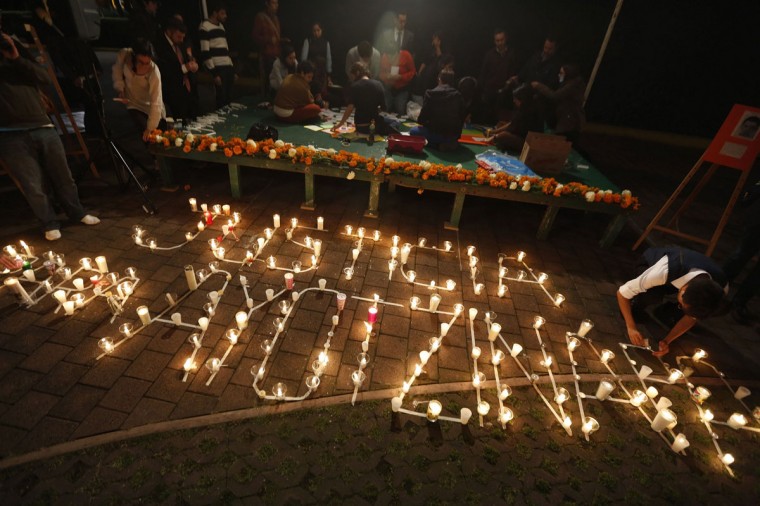 Students at the Instituto Tecnologico Autonomo de Mexico (ITAM) in Mexico City arrange candles to form the words “Justice for Ayotzinapa” during a vigil for 43 Ayotzinapa students missing after last month’s deadly clashes, October 14, 2014. On September 26, police allegedly linked to a criminal gang shot dead at least three students and abducted dozens of others during clashes in the southwestern city of Iguala. Forty-three of the students are still missing. (REUTERS/Tomas Bravo) 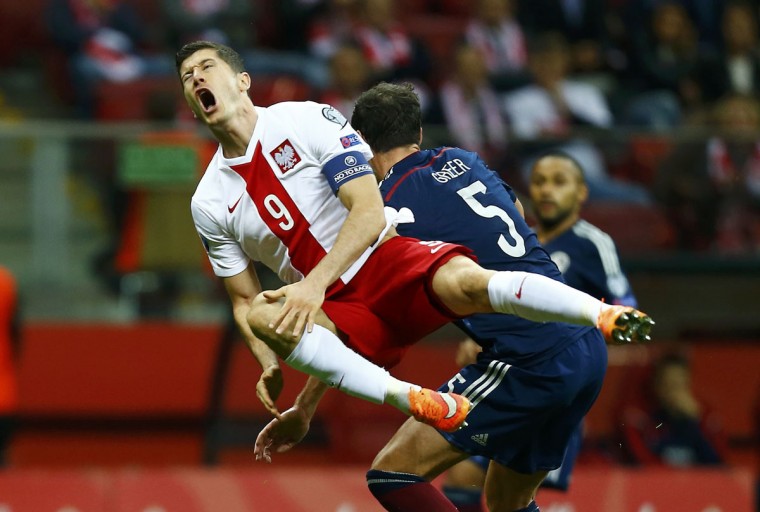 Robert Lewandowski (L) of Poland reacts after being fouled by Gordon Greer of Scotland during their Euro 2016 Group D qualifying soccer match at National Stadium in Warsaw October 14, 2014. (REUTERS/Kacper Pempel) 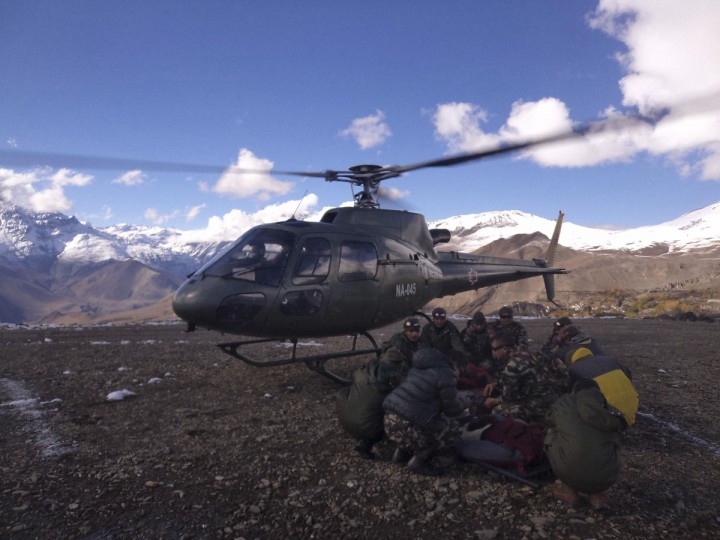 Nepalese army personnel surround a victim rescued from the avalanche as they wait for a helicopter to land at Thorang-La in Annapurna Region in this October 15, 2014 handout photo provided by Nepal Army. At least 12 people, including eight foreign hikers and a group of yak herders, were killed in Nepal by unseasonal blizzards and avalanches triggered by the tail of cyclone Hudhud, officials said on Wednesday. (REUTERS/Nepal Army) 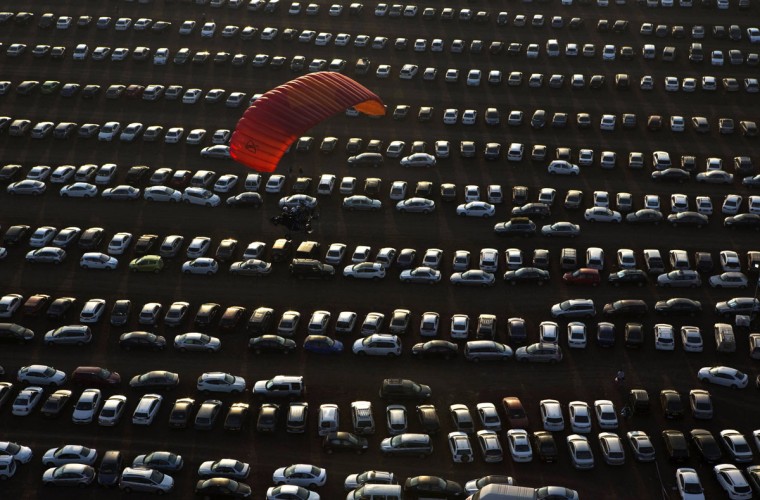 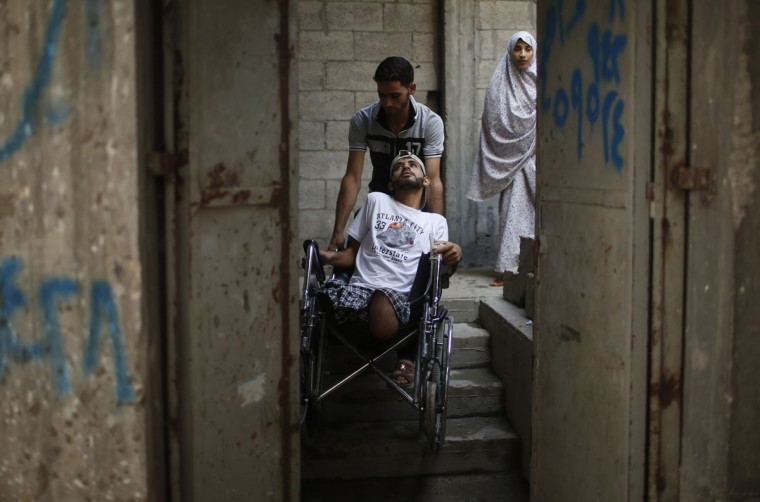 The brother of wheelchair-bound Palestinian Mohammed Abed al-Dayem, 25, pushes him as he enters his house in Beit Lahiya town in the northern Gaza Strip October 15, 2014. Medics say that Abed al-Dayem lost both of his legs when Israeli shelling hit the UN-run school where they took refuge during the most recent conflict between Israel and Hamas. His father was killed while his mother lost her right eye in the same incident. (REUTERS/Mohammed Salem) 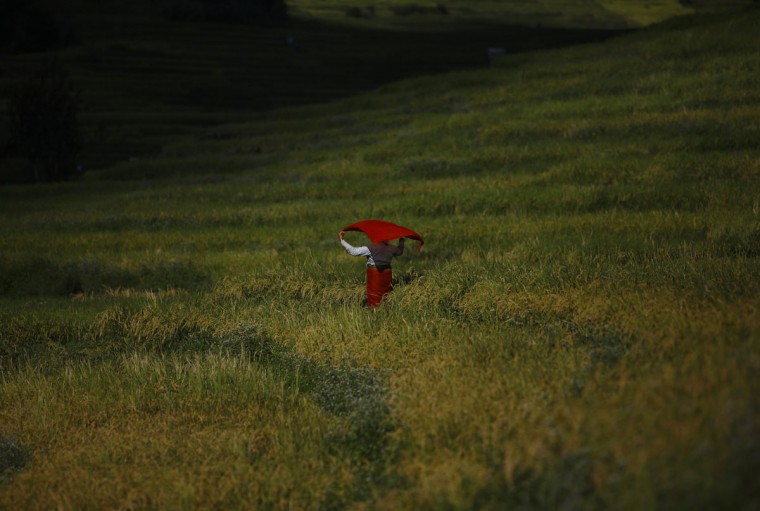 A shadow of a cloud is cast on the fields as a farmer ties a shawl on her head at Khokana in Lalitpur October 15, 2014. (REUTERS/Navesh Chitrakar) 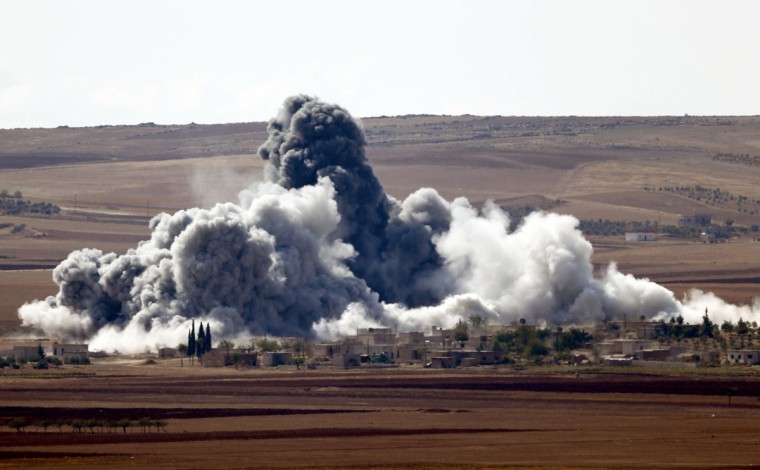 Smoke rises from a village on the outskirts of the Syrian town of Kobani, seen from near the Mursitpinar border crossing on the Turkish-Syrian border in the southeastern town of Suruc in Sanliurfa province October 15, 2014. American-led forces conducted 21 airstrikes near Kobani, Syria, in the last two days to slow the advance of Islamic State militants, the U.S. military said on Tuesday, warning the situation on the ground is fluid as militants try to gain territory. (REUTERS/Kai Pfaffenbach) 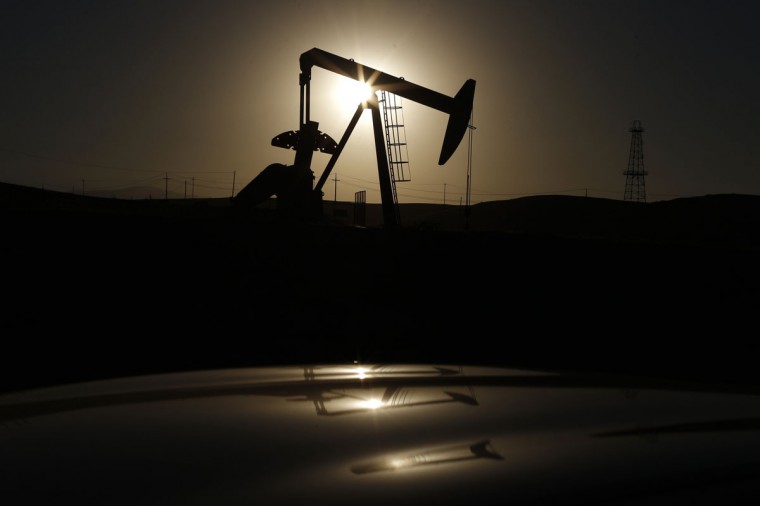 An oil derrick is seen at sunrise near Bakersfield, California October 14, 2014. Brent crude hit a new four-year low on Wednesday before recovering to just under $85 a barrel, as faltering global growth curbed demand for fuel at a time of heavy oversupply. Oil saw its biggest daily fall in more than three years on Tuesday after the West’s energy watchdog slashed its forecasts for world oil demand for this year and 2015. Picture taken October 14, 2014. (REUTERS/Lucy Nicholson)

Pro-democracy protesters block the entrance of the police headquarters at Wan Chai district in Hong Kong October 15, 2014. Hundreds of Hong Kong police used pepper spray on pro-democracy protesters in the early hours of Wednesday to clear a major road that had been barricaded with concrete slabs, heightening tensions in the financial hub. The clashes were the worst in over a week between police and largely student protesters, who late on Tuesday swarmed into a tunnel on a key four-lane thoroughfare, halting traffic and chanting for universal suffrage. (REUTERS/Carlos Barria) 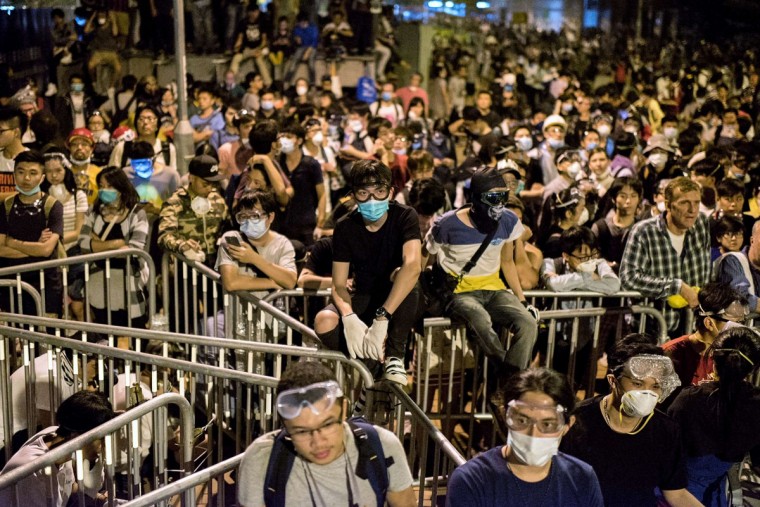 Pro-democracy protesters gather near the central government offices in Hong Kong on October 15, 2014. Hong Kong has been plunged into the worst political crisis since its 1997 handover as pro-democracy activists take over the streets following China’s refusal to grant citizens full universal suffrage. AFP PHOTO/Getty Images/Alex Ogle) 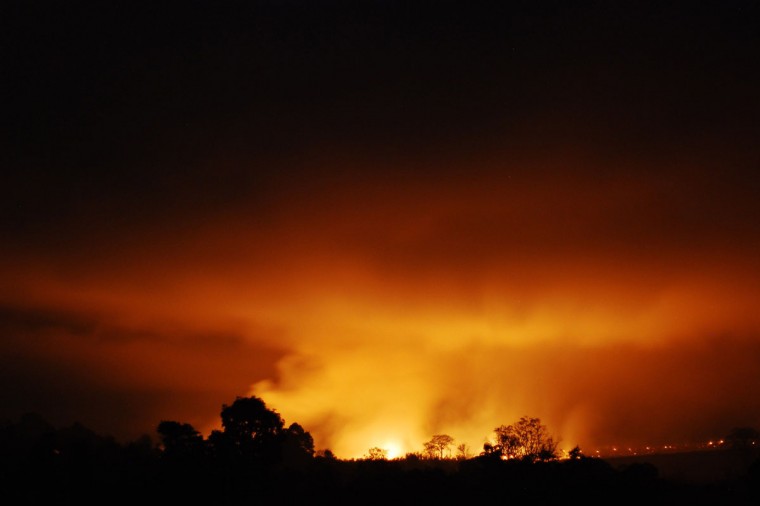 A scorching lava trail burns its surroundings near the foot of Mount Sinabung volcano forcing villagers to flee during an eruption seen from Karo district Sumatra island on October 14, 2014. In February, Sinabung’s eruption killed about 17 people and forced more than 33,000 others to flee their homes. (AFP PHOTO/Getty Images/Sutanta Aditya) 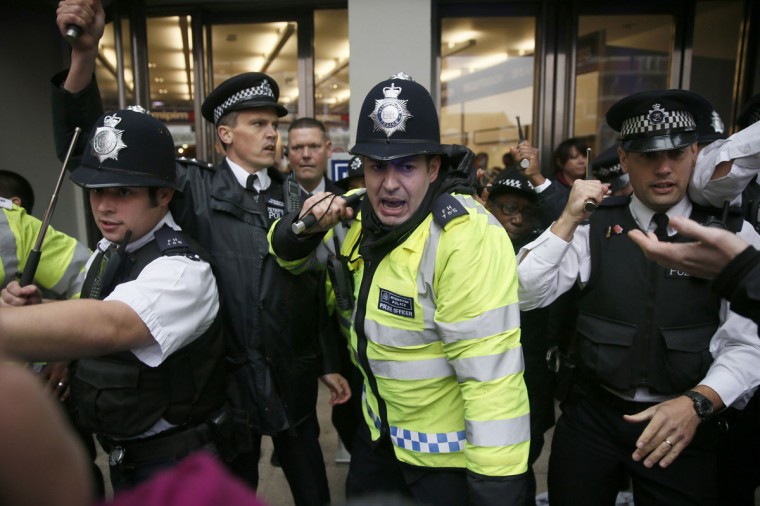 Police officers scuffle with demonstrators outside the MIPIM property fair at Olympia in London October 15, 2014. The fair, which aims to bring together participants in the international property market, was addressed by London Mayor Boris Johnson. (REUTERS/Stefan Wermuth) 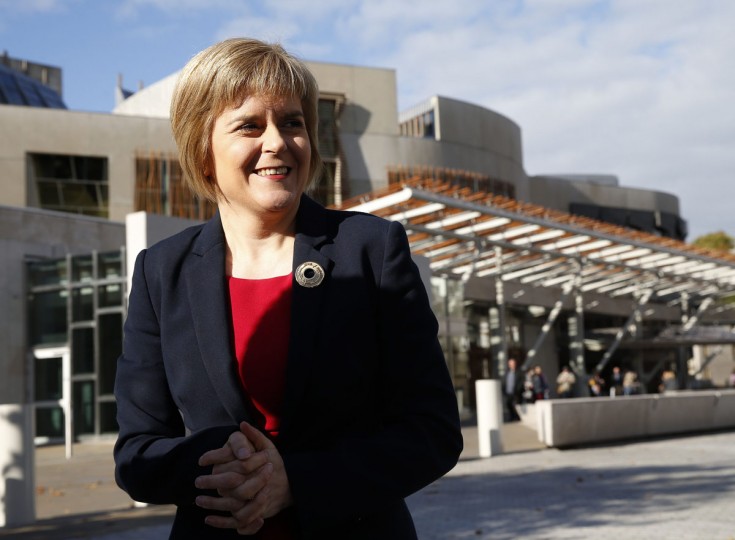 Nicola Sturgeon speaks to the media outside the Scottish Parliament in Edinburgh, Scotland October 15, 2014. Scottish nationalist Nicola Sturgeon will succeed Alex Salmond as leader, the Scottish National Party said on Wednesday after she was the only candidate nominated as party leader. (REUTERS/Russell Cheyne) 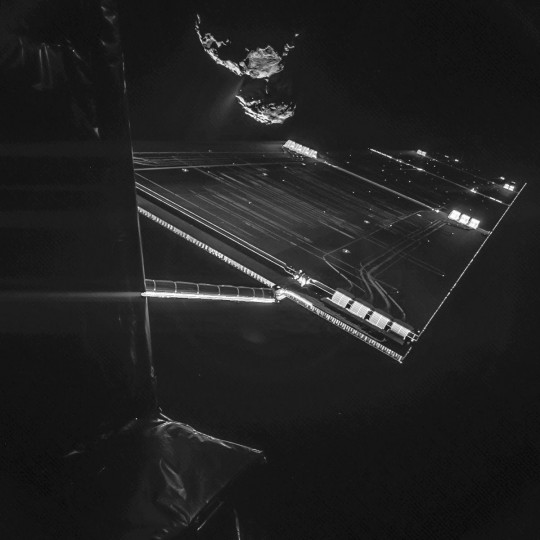 A handout photo released on October 15, 2014 by the European Space Agency shows a picture taken with the CIVA camera on Rosettas Philae lander showing comet 67P/ChuryumovGerasimenko from a distance of about 16 km from the surface of the comet. The ‘selfie’ image was taken on October 7, 2014 and captures the side of the Rosetta spacecraft and one of Rosettas 14 m-long solar wings, with the comet in the background. Two images with different exposure times were combined to bring out the faint details in this very high contrast situation. The comet’s active neck region is clearly visible, with streams of dust and gas extending away from the surface. (AFP PHOTO / ESA/Rosetta/Philae/CIVA)