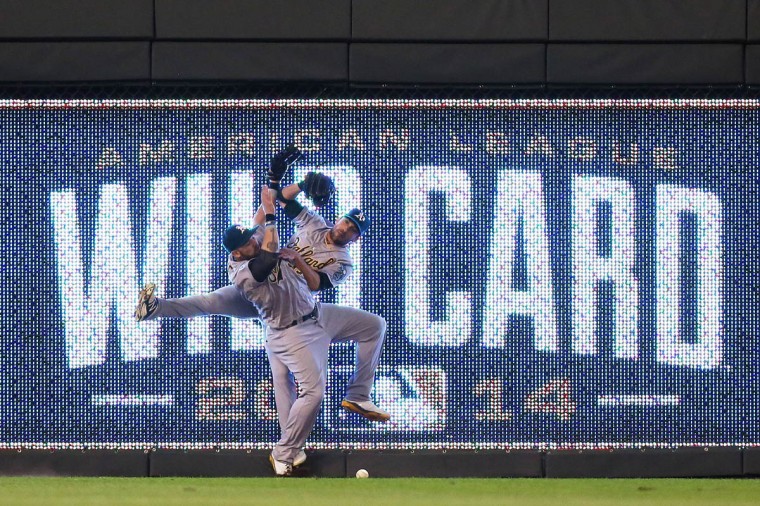 Jonny Gomes #15 and Sam Fuld #23 of the Oakland Athletics collide on a triple hit by Eric Hosmer #35 of the Kansas City Royals in the 12th inning during the American League Wild Card game at Kauffman Stadium in Kansas City, Missouri. (Ed Zurga/Getty Images) 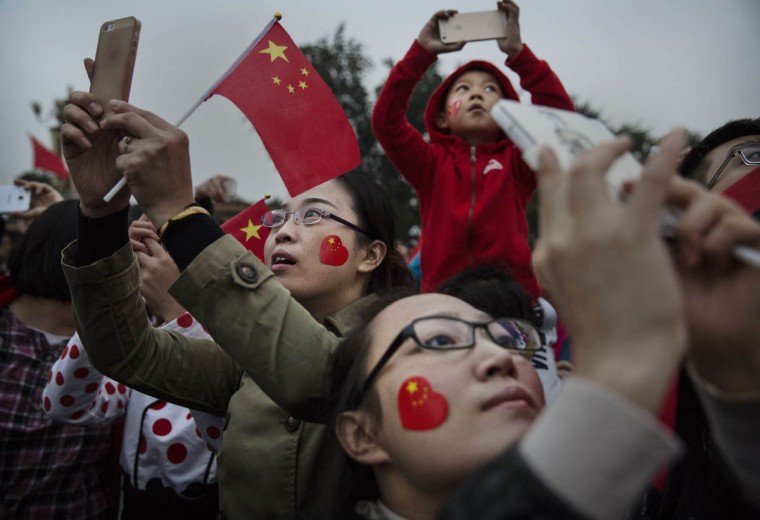 Chinese tourists take pictures near Tiananmen Square on the 65th National Day in Beijing, China. The day marks the founding of the People’s Republic of China on October 1, 1949. (Kevin Frayer/Getty Images) 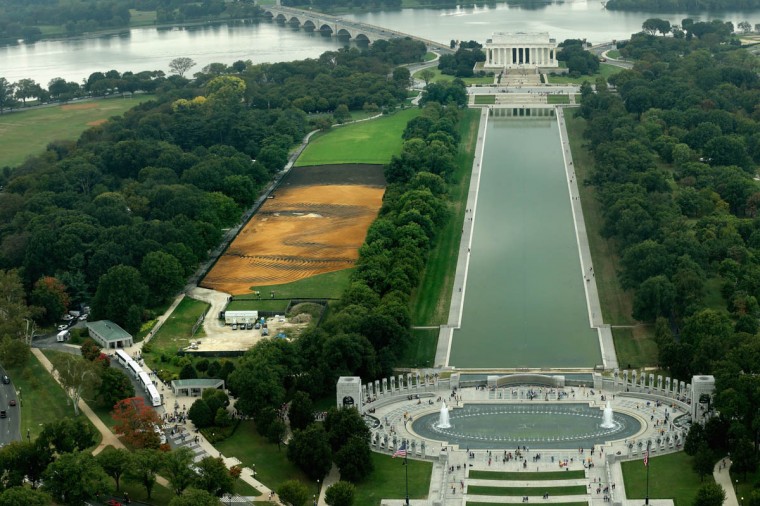 Cuban-American artist Jorge Rodriguez-Gerada’s six-acre sand and soil ‘facescape’ stretches across the JFK Hockey Field on the north side of the Reflecting Pool along the National Mall October 1, 2014 in Washington, DC. Titled ‘Out of Many, One’ and composed of 2,500 tons of sand, 800 tons of top soil and eight miles of string, the piece is the artist’s interpreative blending of 30 different men’s faces. Rodriguez-Gereda used high-precision global positioning satellites to place 10,000 wood pegs as waypoints for the giant face. The piece will be open to the public beginning October 4 and will eventually be tilled back into the earth. (Chip Somodevilla/Getty Images) 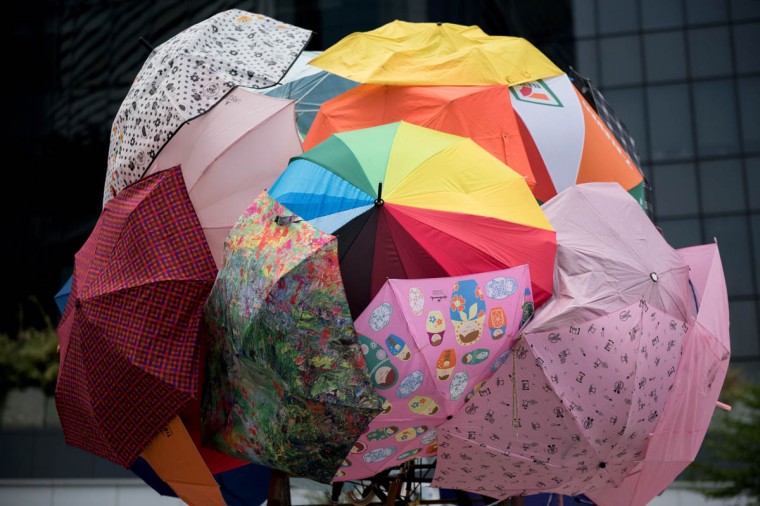 Umbrellas are set up together, symbolizing the so-called ‘umbrella revolution’ of pro-democracy protests, next to the central government offices in Hong Kong. Hong Kong has been plunged into the worst political crisis since its 1997 handover as pro-democracy activists take over the streets following China’s refusal to grant citizens full universal suffrage. (Alex Ogle/Getty Images) 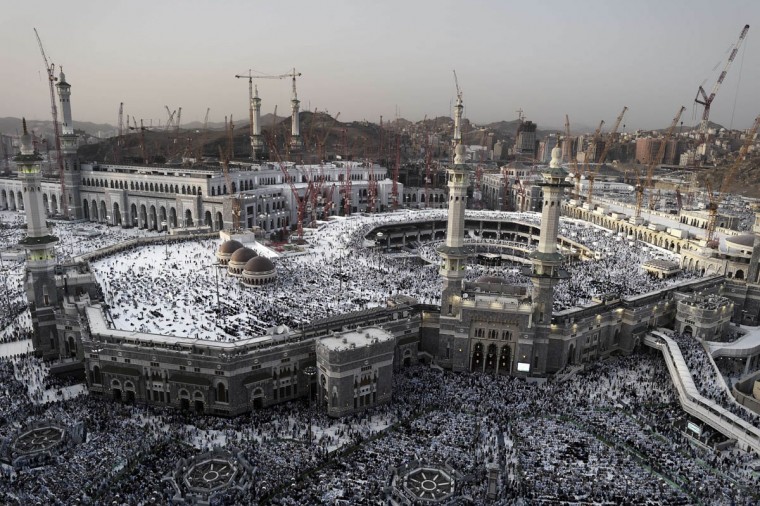 This general view shows Muslim pilgrims arriving for a prayer at Mecca’s Grand Mosque, home of the cube-shaped Kaaba or “House of God” that Muslims believe was built by Abraham 4,000 years ago. Hundreds of thousands of Muslim worshipers started pouring into the holy city for the annual Hajj pilgrimage. This year’s Hajj comes as the authorities strive to protect pilgrims from two deadly viruses, Ebola and Middle East Respiratory Syndrome coronavirus or MERS. (Mohammed Al-Shaikh/Getty Images) 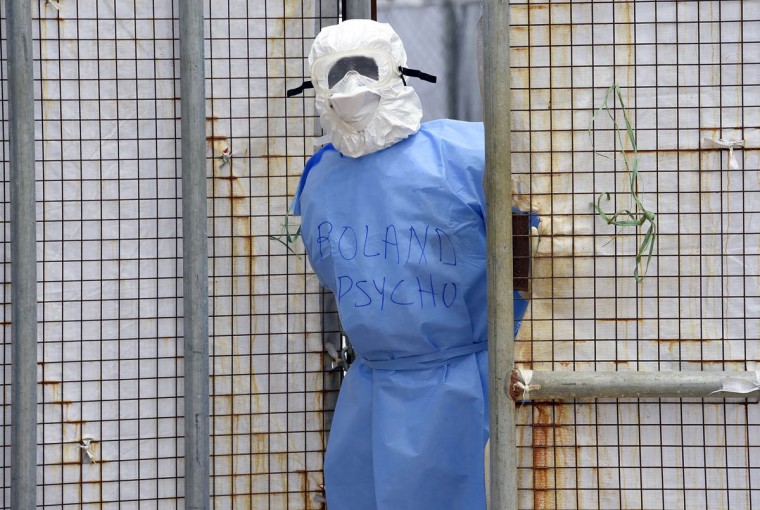 A health worker in protective suit stands at Island Hospital in Monrovia. Liberia has been hit the hardest by the worst-ever outbreak of Ebola, which has killed more than 3,000 people in west Africa. The latest UN data released Saturday said 1,830 people have died from the killer virus in Liberia so far, and 3,458 people have been infected. (Pascal Guyot/Getty Images) 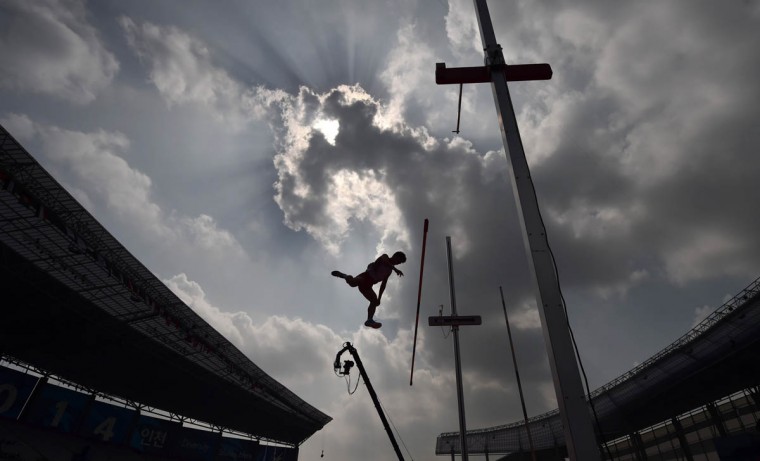 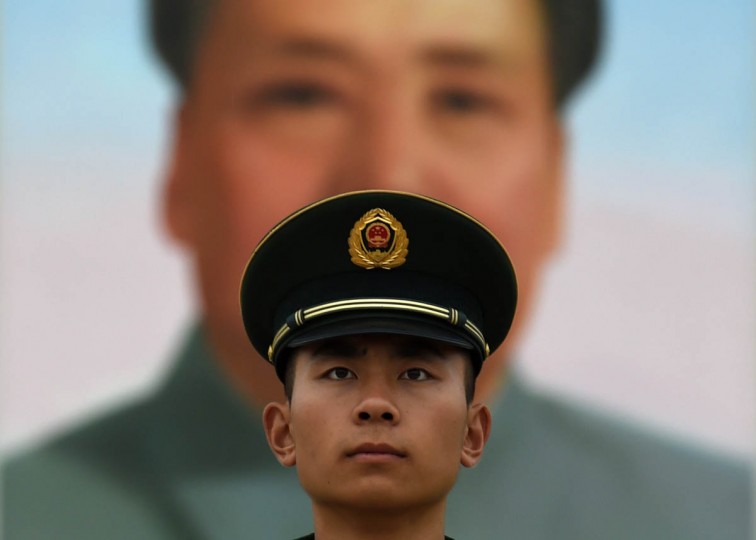 A paramilitary police officer stands guard in front of the portrait of late communist leader Mao Zedong on Tiananmen Gate in Beijing on China’s National Day. Crowds visited the square on the 65th anniversary of the founding of Communist China, by late revolutionary leader Mao Zedong. (Greg Baker/Getty Images) 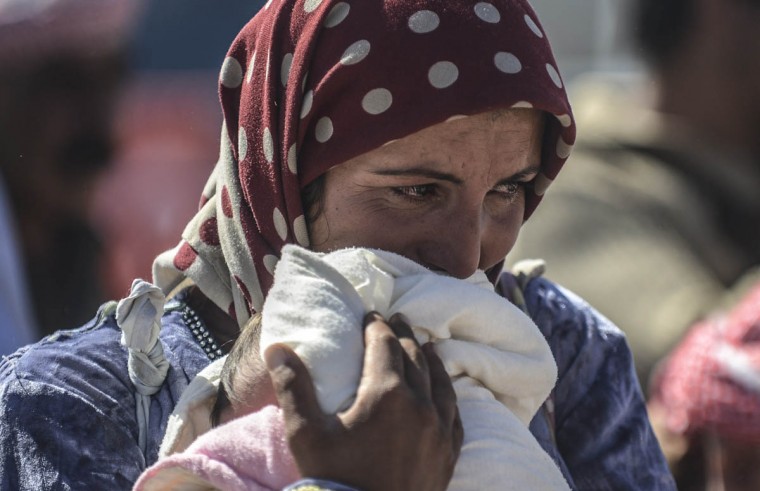 A Syrian Kurdish cries as she holds her baby in the southeastern town of Suruc in the Sanliurfa province after crossing the border between Syria and Turkey. Tens of thousands of Syrian Kurds flooded into Turkey fleeing an onslaught by the Islamic State (IS) group that prompted an appeal for international intervention. Some of the refugees now want to return to protect their homes and join the fight against IS militants. (Bulent Kilic/Getty Images) 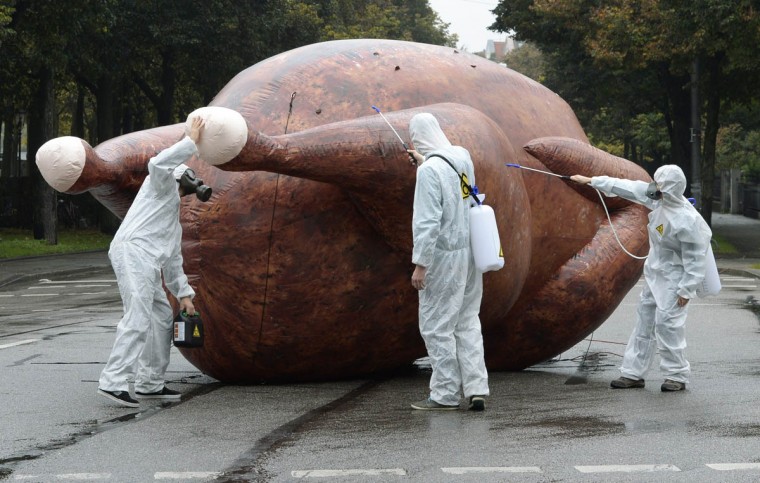 Participants of a protest action against the free trade agreements between Europe and USA (TTIP) protests with a dummy of a symbolic chlorin chicken at a street near the Bavarian beer festival Oktoberfest in Munich, southern Germany. (Christof Stache/Getty Images) 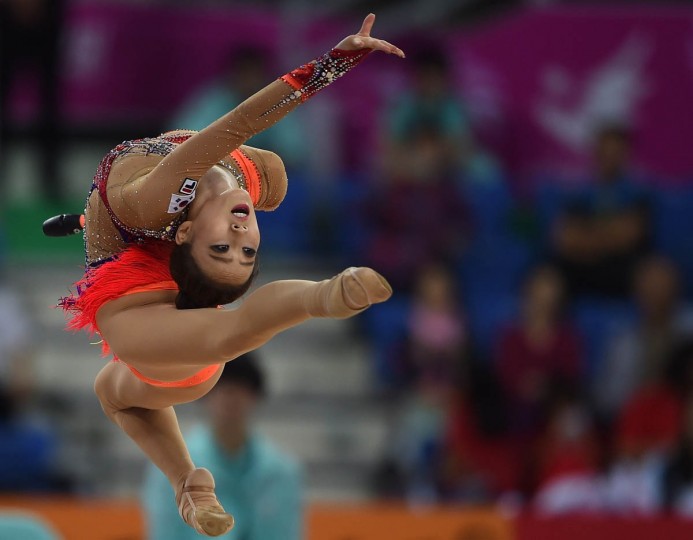 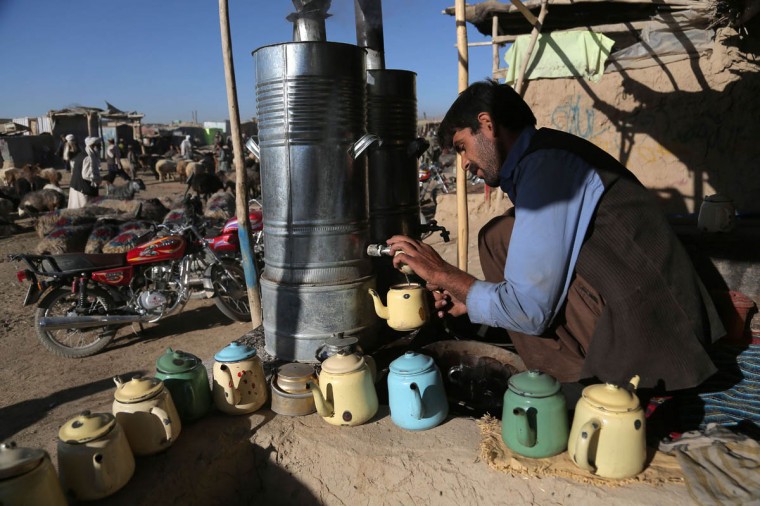 An Afghan man prepares tea for his customers at a livestock market ahead of the sacrificial Eid al-Adha festival in Ghazni. Muslims across the world are preparing to celebrate the annual festival of Eid al-Adha, or the Festival of Sacrifice, which marks the end of the Hajj pilgrimage to Mecca and commemorates Prophet Abraham’s readiness to sacrifice his son to show obedience to God. (Rahmatullah Alizadah/Getty Images) 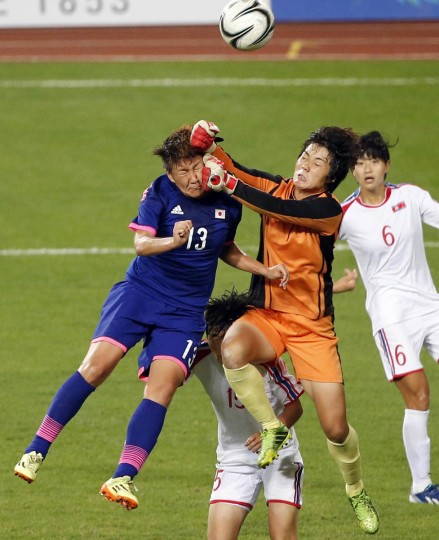 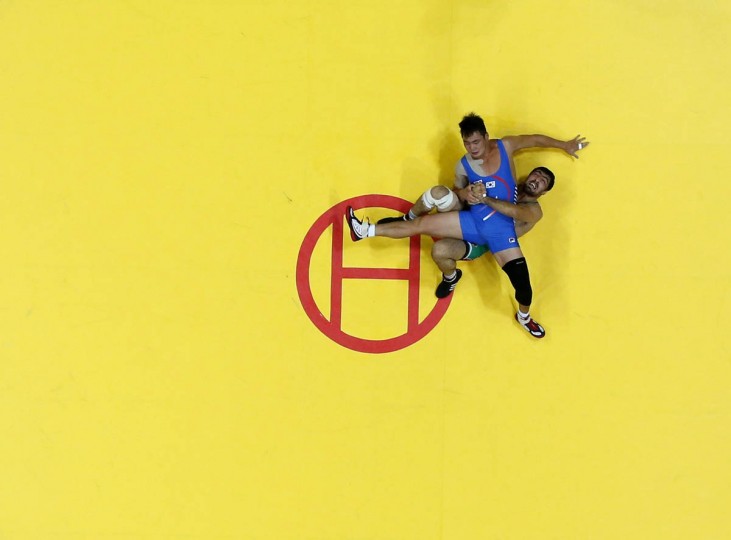 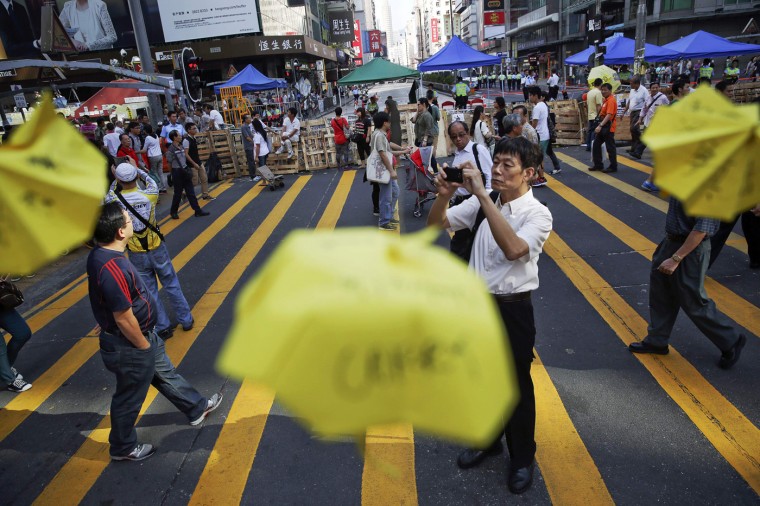 People hold candles and umbrellas during a demonstration in support of the pro-democracy protestors in Hong Kong, in Boston, Massachusetts. Thousands of pro-democracy protestors thronged the streets of Hong Kong early Wednesday, ratcheting up pressure on the pro-Beijing government that has called the action illegal, with both sides making uneasy national day celebrations. (Brian Snyder/Reuters) 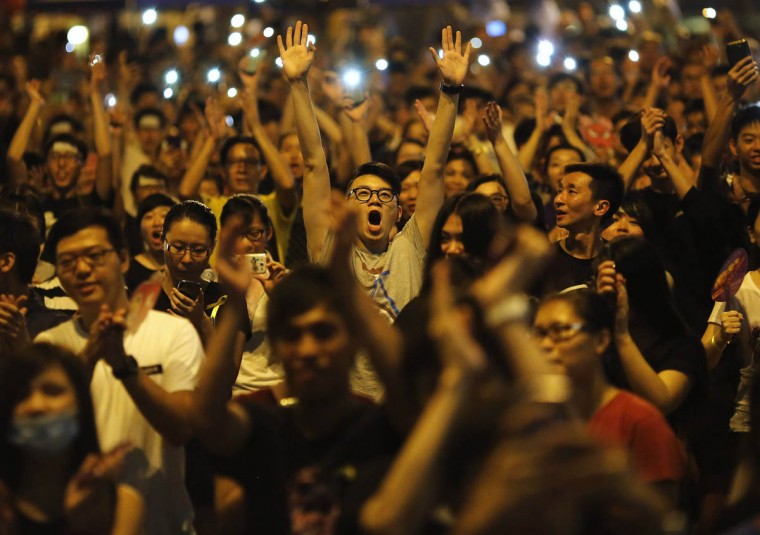 Protesters react as Joshua Wong (not pictured), leader of the student movement, speaks to the crowd outside the government headquarters building in Hong Kong. Thousands of pro-democracy protesters thronged the streets of Hong Kong on Wednesday, some of them jeering National Day celebrations, and students threatened to ramp up demonstrations if the city’s pro-Beijing leader did not step down. (Carlos Barria/Reuters) 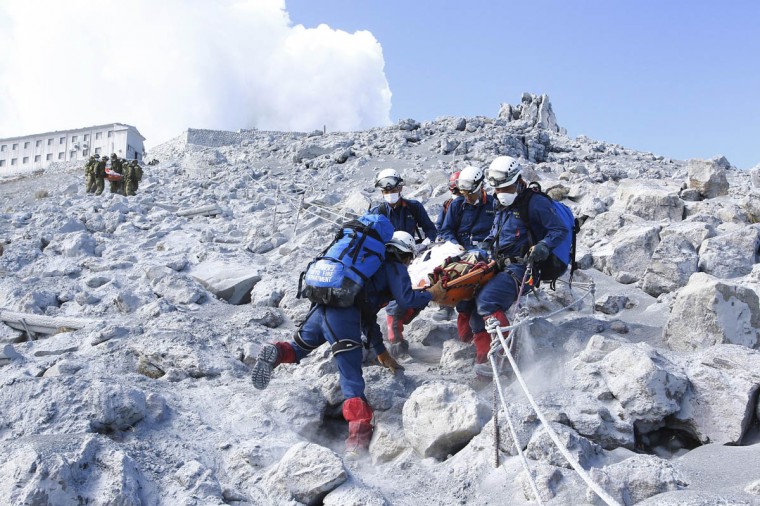 Firefighters carry a hiker during rescue operations near the peak of Mount Ontake, which straddles Nagano and Gifu prefectures, central Japan, in this handout photograph released by the Tokyo Fire Department. The death toll from a Japanese volcano eruption rose to 47 on Wednesday, the worst in 88 years, after more victims were discovered on the ash-covered mountain. (Tokyo Fire Department/Handout via Reuters) 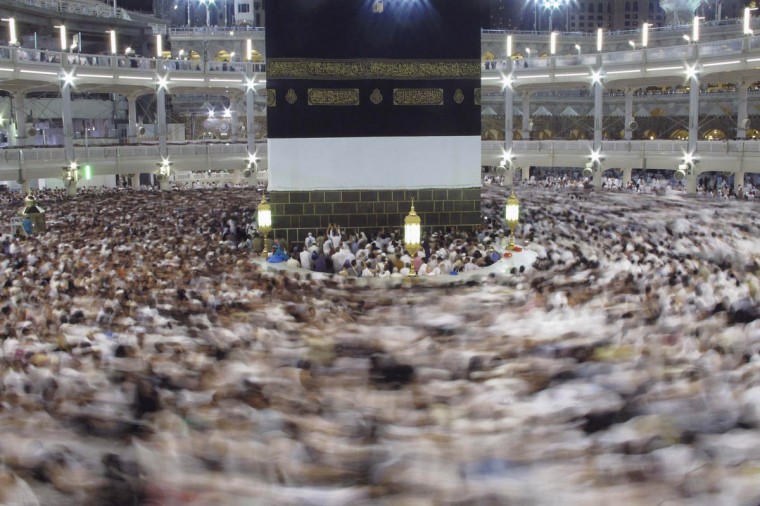 Muslim pilgrims pray around the holy Kaaba at the Grand Mosque, during the annual haj pilgrimage in Mecca. (Muhammad Hamed/Reuters) 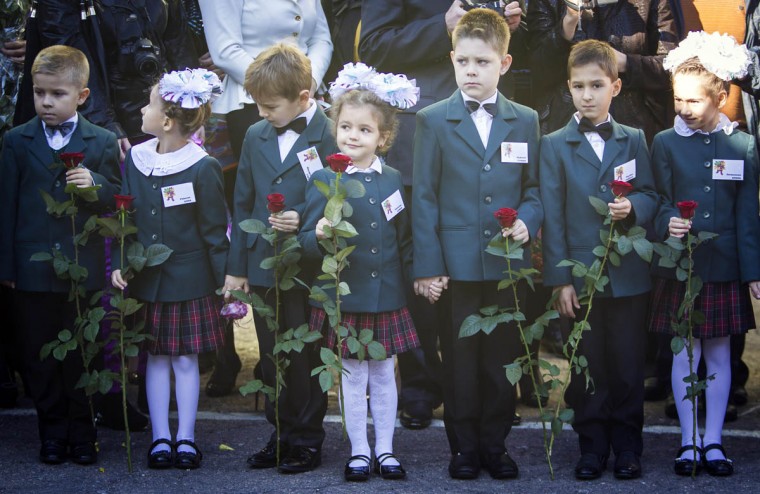 First-grade pupils attend a festive ceremony to mark the beginning of another academic year in Makiivka, eastern Ukraine. The beginning of a new school year in the self-proclaimed “Donetsk People’s Republic” (DNR) was delayed for a month due to the military conflict in the region. (Shamil Zhumatov/Reuters) 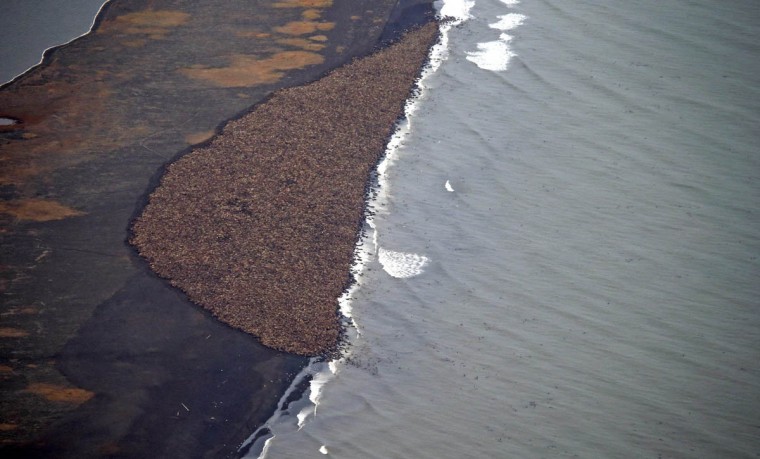 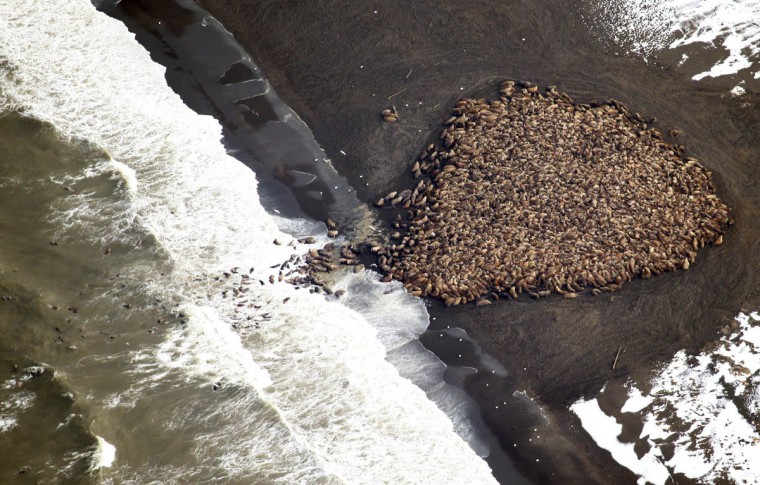