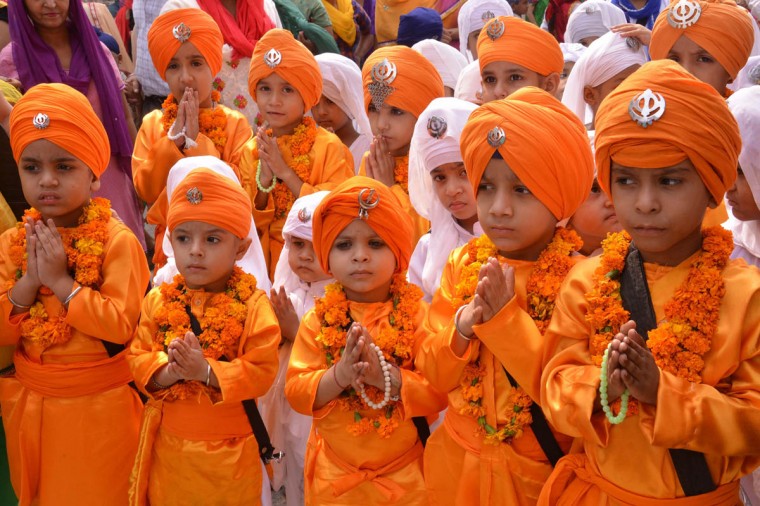 Indian Sikh school children dressed as Punj Pyara participate in a procession from the Sri Akal Takhat at the Sikh Shrine, The Golden Temple in Amritsar on October 8, 2014, on the eve of the birth anniversary of the fourth Sikh Guru Ramdass. Ramdass was born in Lahore in 1574 and is Chauthi Patshahi or the fourth Guru as well as the Guru who established the city of Amritsar. (Narinder Nanu/Getty Images) 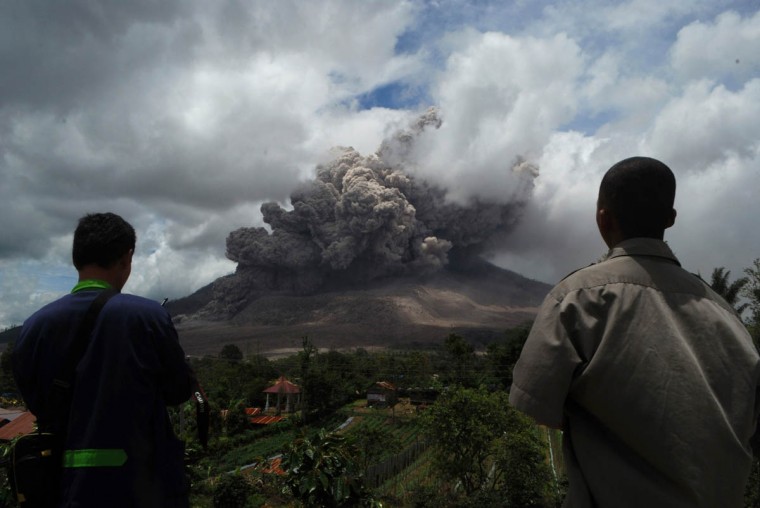 Residents watch as dark giant ash clouds rise from the crater of Mount Sinabung volcano during an eruption on October 8, 2014, as seen from Karo district located on Indonesia’s Sumatra island, following an earlier eruption on October 5, 2014. According to authorities hundreds of residents are still housed at evacuation centers as authorities maintain off limit danger zone around Mount Sinabung located in Indonesia’s Sumatra island following deadly eruption in early February that killed about 17 people. (Sutanta Aditya/Getty Images) 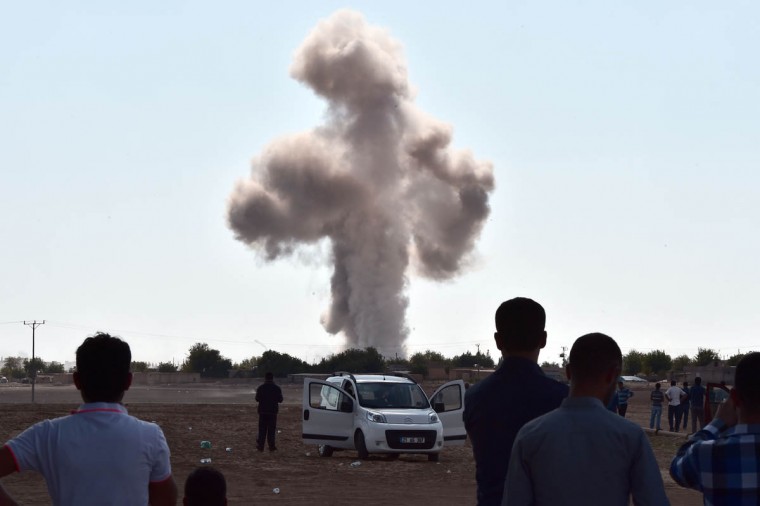 Smoke rises following an air strike on the western sector of the Syrian town of Ain al-Arab, known as Kobane by the Kurds, as seen from the Turkish-Syrian border, in the southeastern town of Suruc, Sanliurfa province, on October 8, 2014. Jihadists from the Islamic State group withdrew from some parts of the embattled Syrian town of Kobane overnight after air strikes by a US-led coalition, a monitor said. IS began its advance on Kobane, Syria’s third biggest Kurdish town, on September 16, quickly sweeping through the surrounding countryside and prompting an estimated 186,000 people to flee the region across the border into Turkey. (Aris Messinis/Getty Images) 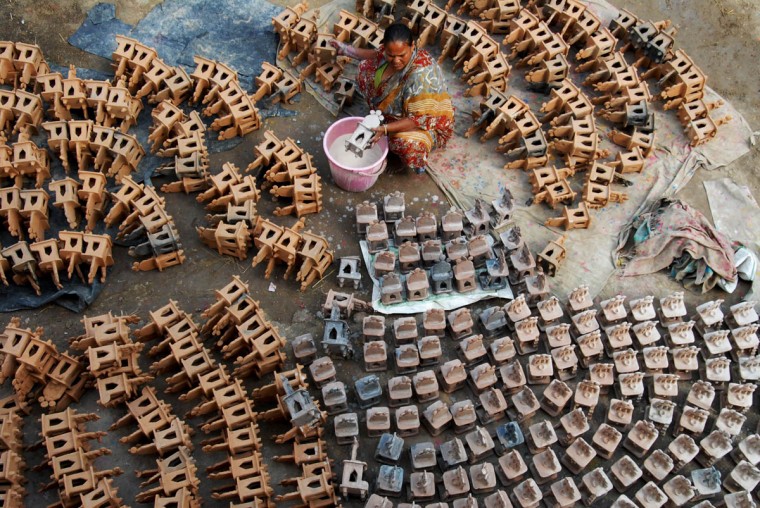 An Indian potter prepares clay lanterns used during Diwali celebrations ahead of the forthcoming Hindu festival in Jalandhar on October 8, 2014. Diwali, celebrated this year on October 23, marks the victory of good over evil and commemorates the time when the Hindu god Lord Rama achieved victory over Ravana, and returned to his kingdom of Ayodhya after 14 years exile. (Shammi Mehra /Getty Images) 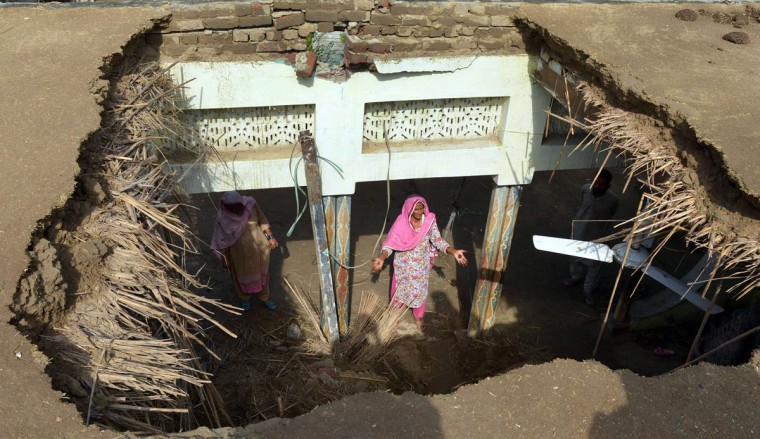 A Pakistani woman gestures beneath the damaged roof of her house, allegedly caused by shells fired by Indian troops, at the Dhamala border village near the eastern city of Sialkot in Punjab province on October 8, 2014. Pakistani officials accused Indian troops of killing four civilians including two children in cross-border firing, while mortar attacks in parts of disputed Kashmir injured one and forced the cancellation of Eid prayers. (Arif Ali/Getty Images) 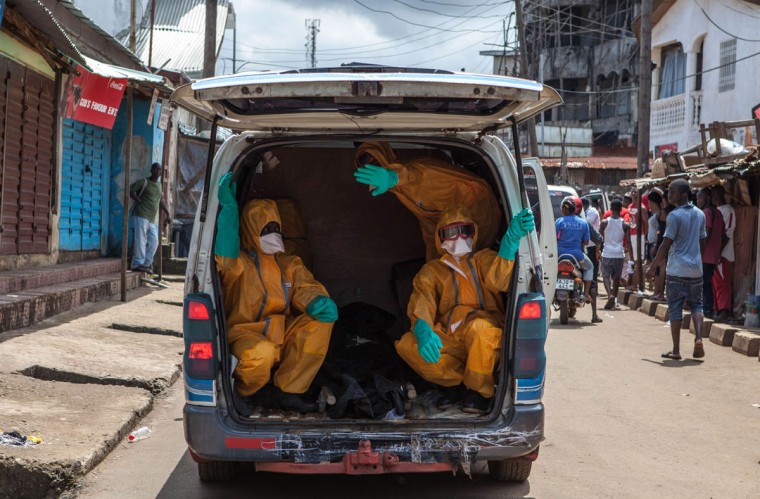 Volunteers arrive to pick up bodies of people who died of the Ebola virus, against a 100 US dollar weekly risk-taking compensation, on October 8, 2014 in Freetown. Dozens of British military personnel are due to fly to Sierra Leone next week to help build medical facilities to combat the Ebola epidemic, the defence ministry said on October 7. (Florian Plaucheur/Getty Images) 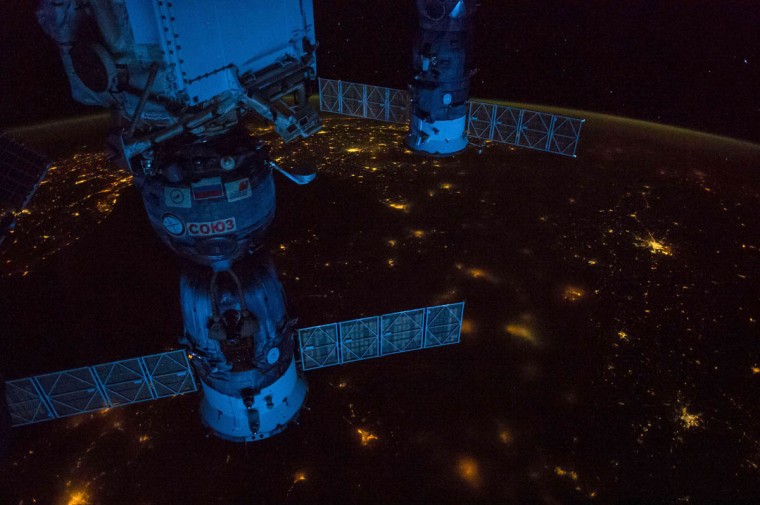 This NASA handout photo taken by Expedition 41 crew members aboard the International Space Station (ISS), flying at an altitude of 220 nautical miles, photographed this night panorama of parts of Europe. Kiev, Ukraine is seen near the right edge of the photo in the center. Lights of Constanta, Romania can be seen just below the Russian Progress 56 cargo vehicle docked to the orbital outpost at the top of the frame. The Black Sea is to the left of the Soyuz TMA-13M docked to the station on the left side of the scene. Krasnodar, Russia is in the bottom left corner. Part of Greece is in the top of the image near the solar panel of the Progress. Part of Turkey is in upper left of the land mass visible. Pre-dawn light coming through the atmosphere gives the station hardware a bluish color. (NASA /Getty Images) 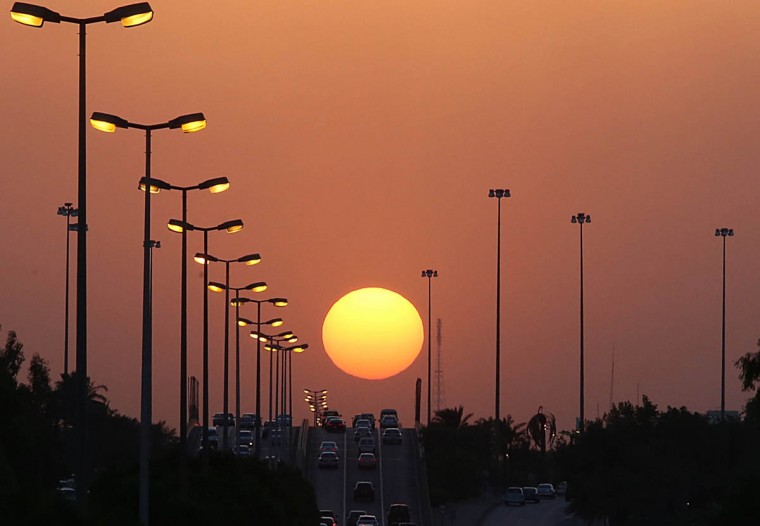 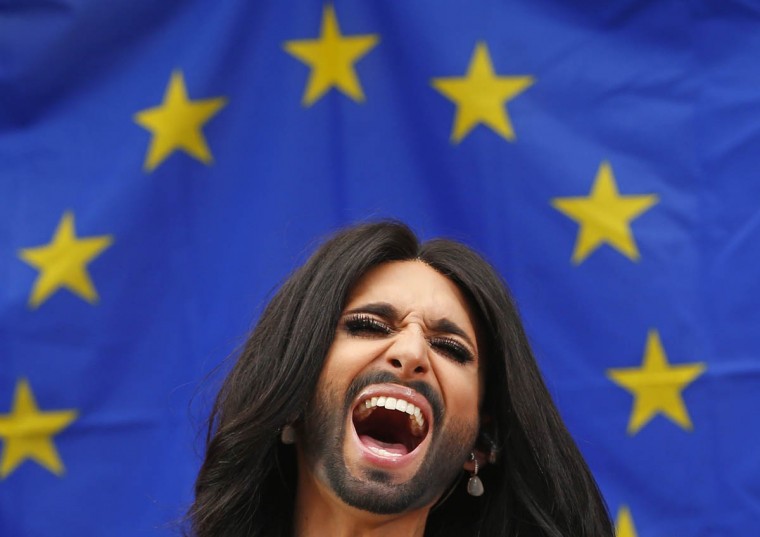 Conchita Wurst, the bearded transgender winner of the Eurovision Song Contest, performs during a concert at the European Parliament in Brussels October 8, 2014. The concert organized by members of Parliament aimed to support the adoption in February of the report against homophobia and sexual discriminations. (Yves Herman/Reuters photo) 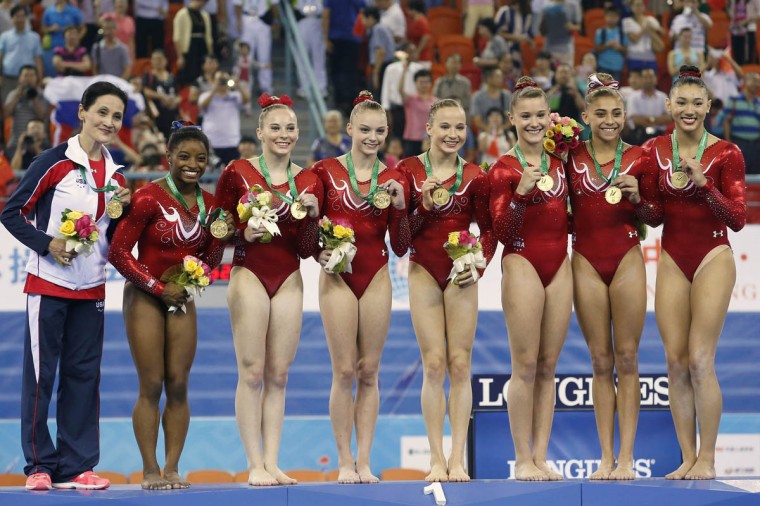 U.S. gymnasts pose with their gold medals on the podium after winning the women’s team final event at the 2014 World Artistic Gymnastics Championships in Nanning, Guangxi Zhuang Autonomous Region, October 8, 2014. The United States defended their women’s team title at the championships on Wednesday with a victory over hosts China, with Russia claiming third. (China Daily/Reuters photo)

A pro-democracy protester reads the newspaper as she blocks the main street to financial Central District outside of the government headquarters building in Hong Kong October 8, 2014. Hong Kong pro-democracy protests that brought tens of thousands on to the streets last week dwindled to a few hundred on Wednesday after activist leaders agreed to talks with the government which are all but certain to go nowhere. (Carlos Barria/Reuters photo) 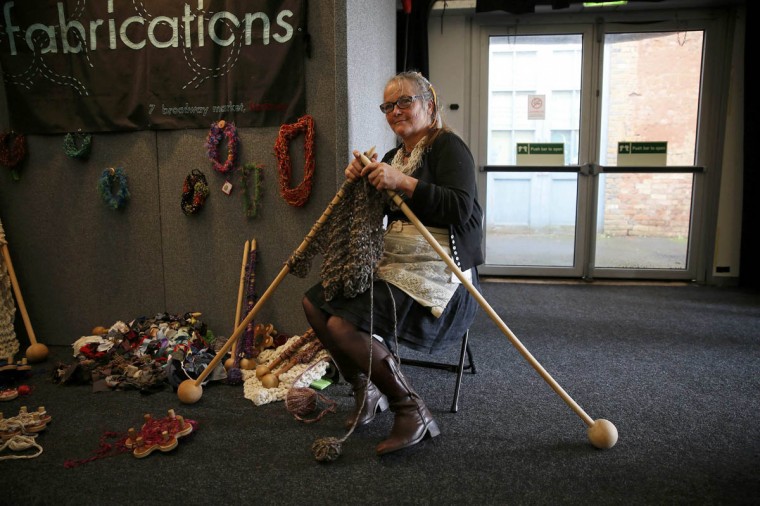 A woman knits with large knitting needles during the Knitting and Stitching show at Alexandra Palace in London, October 8, 2014. The show which includes over 600 exhibitors and 300 workshops is the largest textile and craft event in Britain. (Stefan Wermuth/Reuters photo) 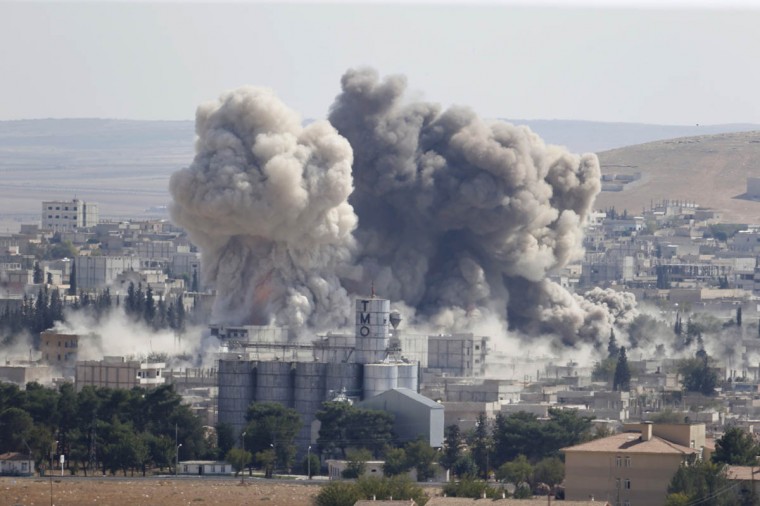 Smoke rises after an U.S.-led air strike in the Syrian town of Kobani Ocotber 8, 2014. U.S.-led air strikes on Wednesday pushed Islamic State fighters back to the edges of the Syrian Kurdish border town of Kobani, which they had appeared set to seize after a three-week assault, local officials said. The town has become the focus of international attention since the Islamists’ advance drove 180,000 of the area’s mostly Kurdish inhabitants to flee into adjoining Turkey, which has infuriated its own restive Kurdish minority– and its NATO partners in Washington — by refusing to intervene. (Umit Bektas/Reuters photo) 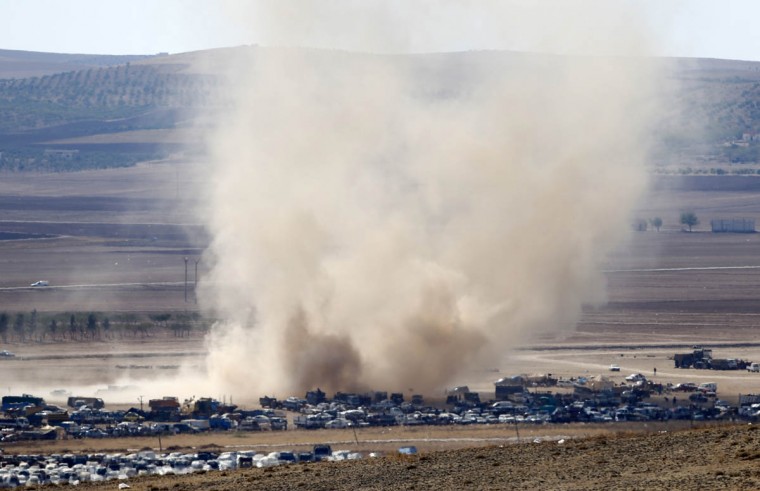 A whirlwind advances towards an area where Syrian Kurds fleeing to Turkey from Syria parked their vehicles in no man’s land on the Turkish-Syrian border in the southeastern town of Suruc in Sanliurfa province October 8, 2014. The Pentagon said on Wednesday that a Turkish proposed buffer zone was not one of the military options under consideration as a U.S.-led coalition pursues airstrikes in Syria, but acknowledged it was a subject of discussions with Ankara. (Umit Bektas/Reuters photo) 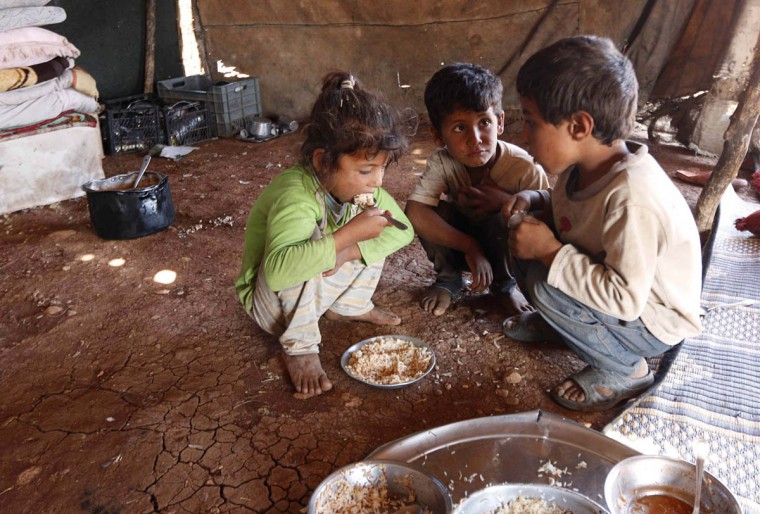 Internally displaced children, who along with their family fled the violence in Aleppo’s Handarat area, eat inside a tent in the northern countryside of Aleppo October 8, 2014. (Jalal Al-Mamo/Reuters photo) 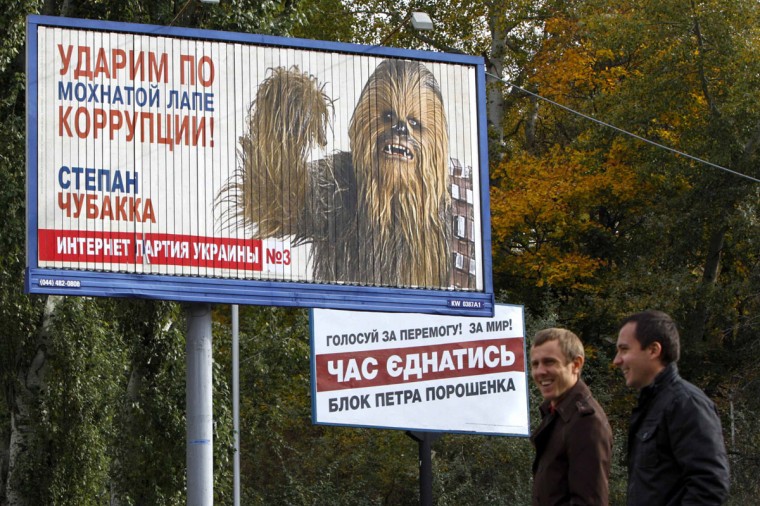 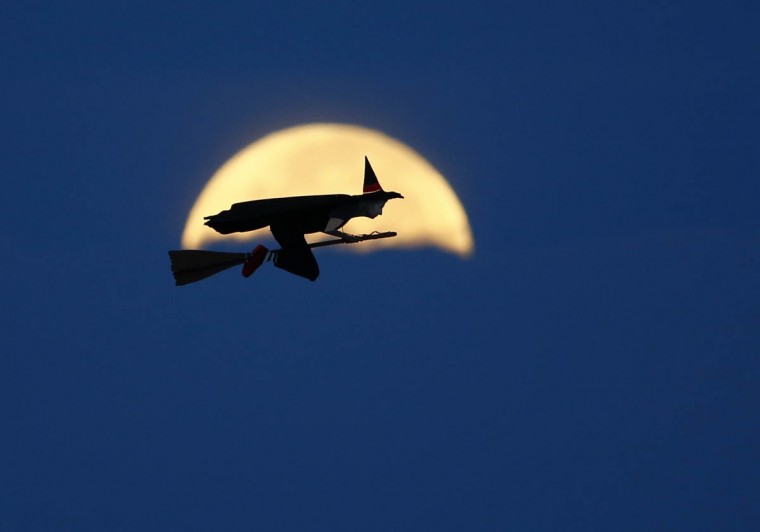 A radio-controlled flying witch makes a test flight past a moon setting into clouds along the pacific ocean in Carlsbad, California October 8, 2014. Reuters was invited to photograph the testing of the life sized device by inventor Otto Dieffenbach lll. (Mike Blake/Reuters photo) 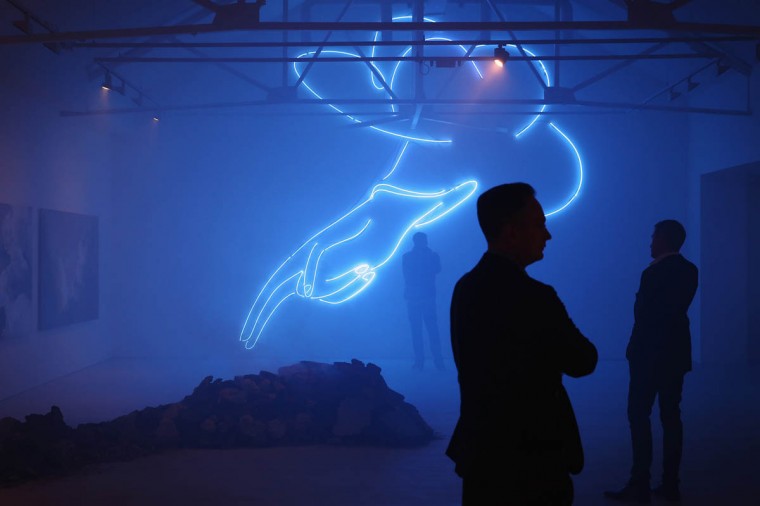 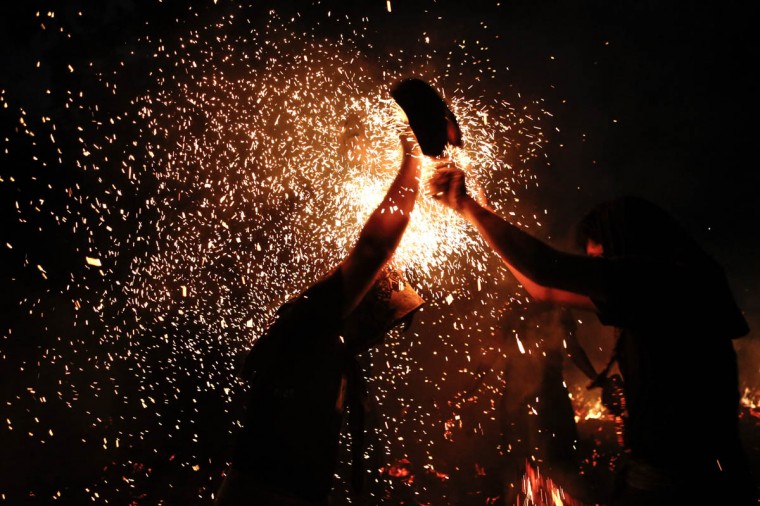 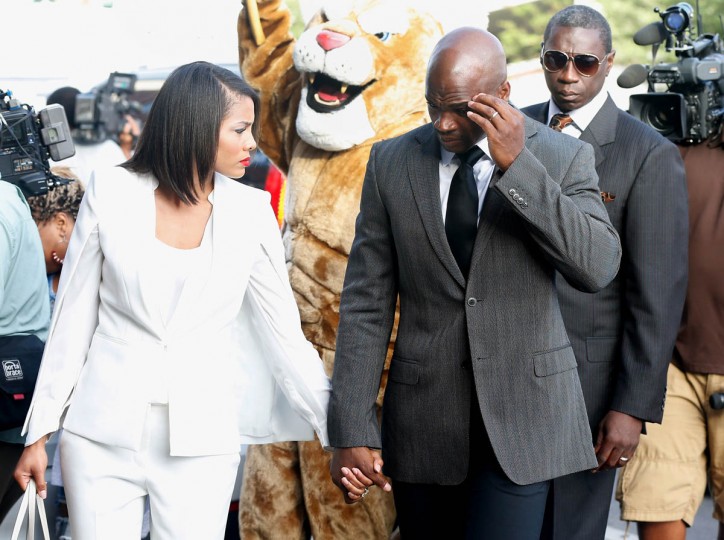 NFL player Adrian Peterson of the Minnesota Vikings walks with his wife Ashley Brown to a court appearance at the Montgomery County municipal building on October 8, 2014 in Conroe, Texas. Peterson did not enter a plea, and after about an hour in the courtroom the hearing was reset. A tentative trial date was set for Dec. 1. Petersen is facing charges of reckless or negligent injury to a child. (Scott Halleran/Getty Images) 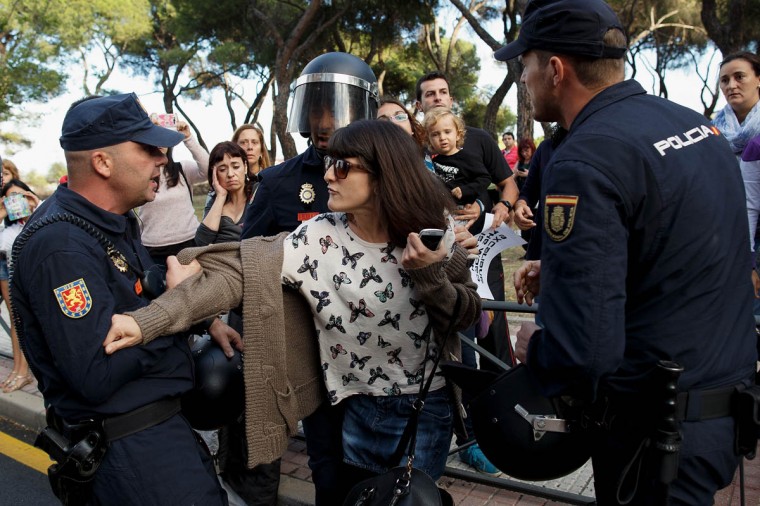 Policemen pull on an animal rights protester as a van allegedly containing the dog named Excalibur drove away from an apartment building, the private residence for Spanish nurse Teresa Romero who has tested positive for the Ebola virus on October 8, 2014 in Alcorcon, near Madrid, Spain. Teresa’s dog is thought to be at risk of being put down as health officials try to keep the virus from spreading. Spanish Health Minister Ana Mato confirmed nurse, Teresa Romero had tested positive after treating two Ebola patients who had been brought back to the country from Africa. (Pablo Blazquez Dominguez/Getty Images) 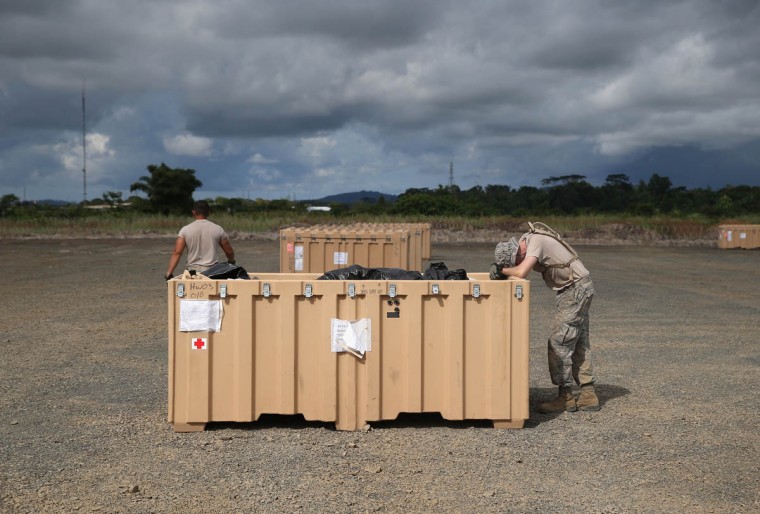 Exhausted from the tropical heat, a U.S. Air Force airmen rests after a day of setting up a 25-bed hospital to aid Liberian health workers infected with Ebola on October 8, 2014 near Monrovia, Liberia. The airmen are constructing the modular hospital, known by the military as an expeditionary medical support system (EMEDS), near the international airport outside of Monrovia. The airmen will train U.S. public health service members in using the hospital’s medical equipment, but will not be involved in treatment of Ebola patients. (John Moore/Getty Images)