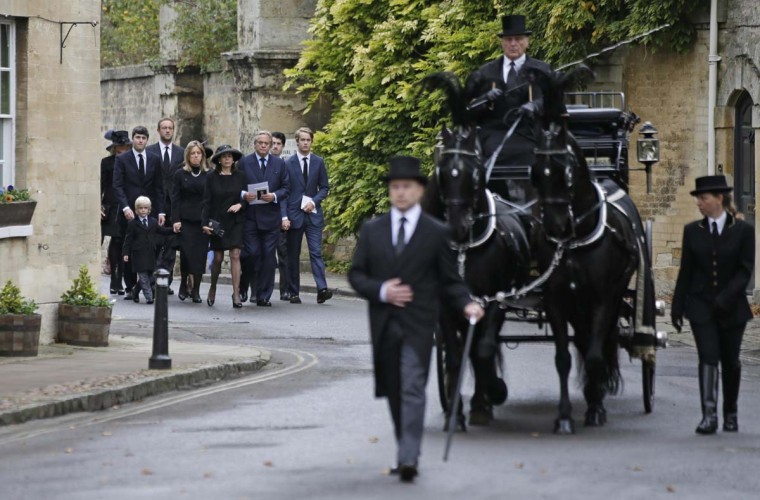 The funeral courtege of the 11th Duke of Marlborough, John Spencer-Churchill, passes along a street on the way to his funeral service at the Parish Church of St. Mary Magdalene, in Woodstock, southern England October 24. The Duke died on October 16th. His Blenheim Palace home is a Unesco World Heritage Site, and the birthplace of Winston Churchill. || PHOTO CREDIT: PETER NICHOLLS – REUTERS 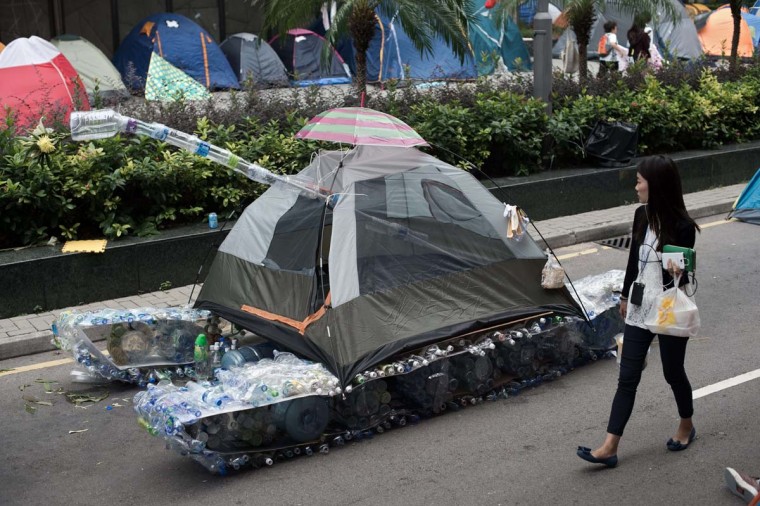 A woman walks past a tank made out of an umbrella, a tent and used plastic bottles in the Admiralty district of Hong Kong on October 24, 2014. A United Nations rights watchdog pressed Hong Kong to enact democratic reforms, saying moves so far fell short of what was needed. || CREDIT: NICOLAS ASFOURI – AFP/GETTY IMAGES 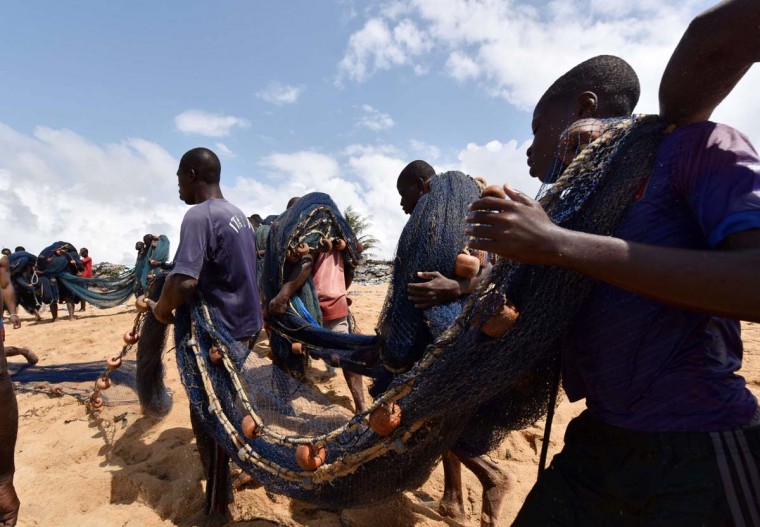 Men carry a fishing net on October 24 on a beach between Abidjan and Bassam. According to the UN Food and Agriculture Organization (FAO), fish is the primary source of animal protein for Ivorian consumers. Annual national fish consumption is estimated at between 250,000 and 300,000 tons with annual local catches averaging 80,000 tons. || CREDIT: SIA KAMBOU – AFP/GETTY IMAGES 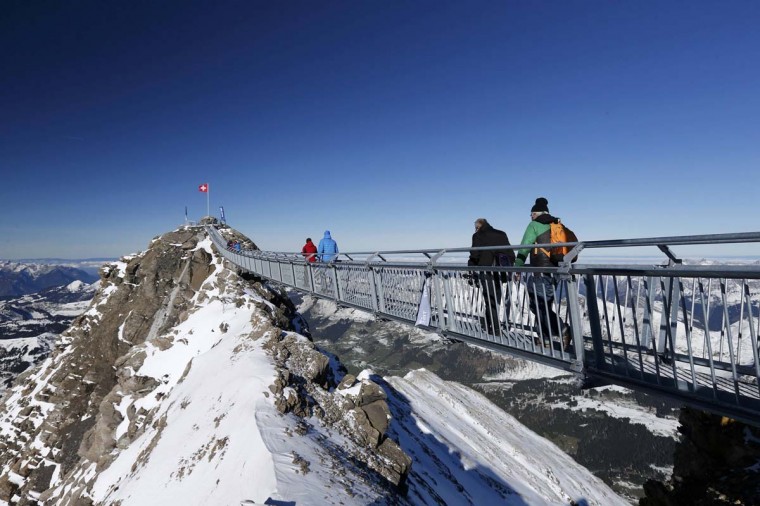 Guests walk along the ‘Peak Walk’ bridge during a media preview, at the Glacier 3000 in Les Diablerets October 24. Built between the Scex Rouge and View Point at an altitude of 3,000 metres (9,800 feet) the 107 m (351 feet) long and 80 cm (31 inches) wide hanging bridge is the first in the world to connect two peaks with one another. The Matterhorn, Mont Blanc, Eiger, Moench und Jungfrau mountains can be seen from the platform. || PHOTO CREDIT: DENIS BALIBOUSE – REUTERS 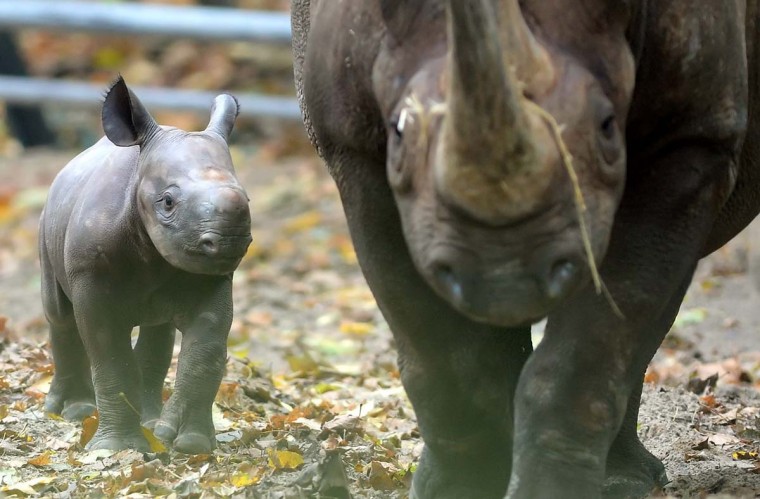 A baby rhinoceros is accompanied by its mother “Kumi” as they walk through their enclosure on October 24 at the zoo in Berlin. The animal was born on October 14, 2014 at the zoo. || PHOTO CREDIT: BRITTA PEDERSEN – AFP/GETTY IMAGES 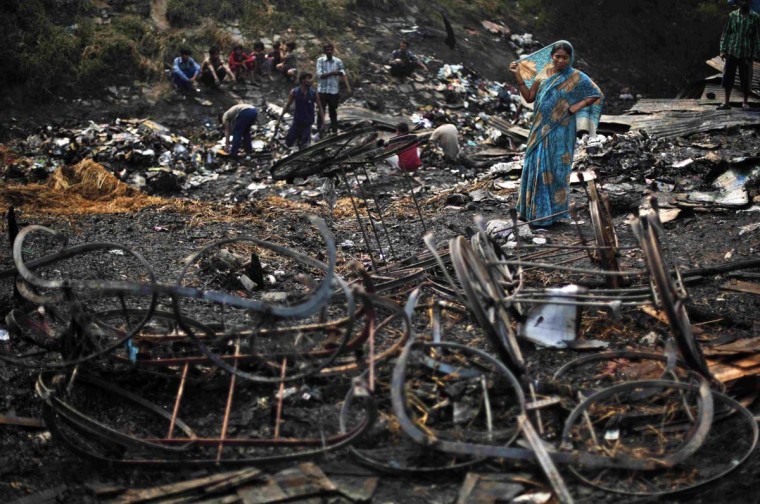 A local resident stands next to her belongings which were burnt in a fire that broke out in a slum area in New Delhi October 24. No causalities were reported and the cause of the fire is still unknown, fire officials said on Friday. || PHOTO CREDIT: ADNAN ABIDI – REUTERS 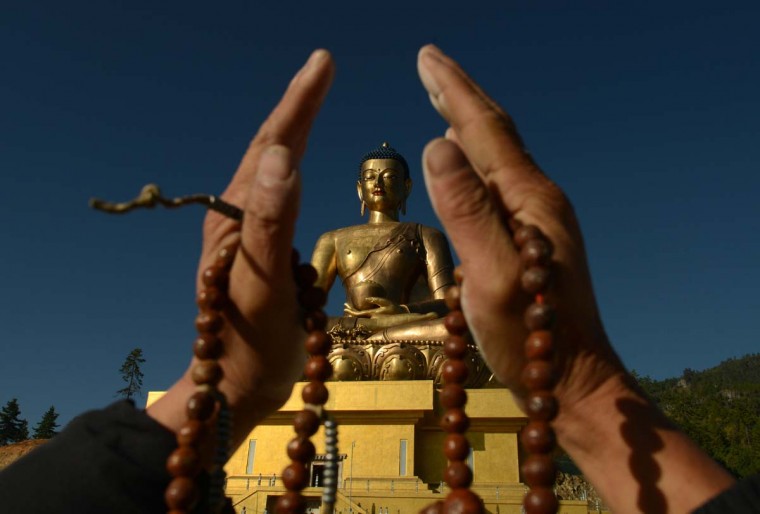 A Bhutanese Buddhist devotee poses for a photograph as he offers prayers at the Buddha Dordenma statue in Thimphu on October 23. Bhutan — nestled in the Himalayas and flanked by both India and China — is renowned for its rich Buddhist culture, and villages are still steeped in its traditions. Protecting the Buddhist culture is a key pillar of Bhutan’s unique “Gross National Happiness” development model, which aims to balance spiritual and mental well-being with economic growth. || CREDIT: PRAKASH MATHEMA – AFP/GETTY IMAGES 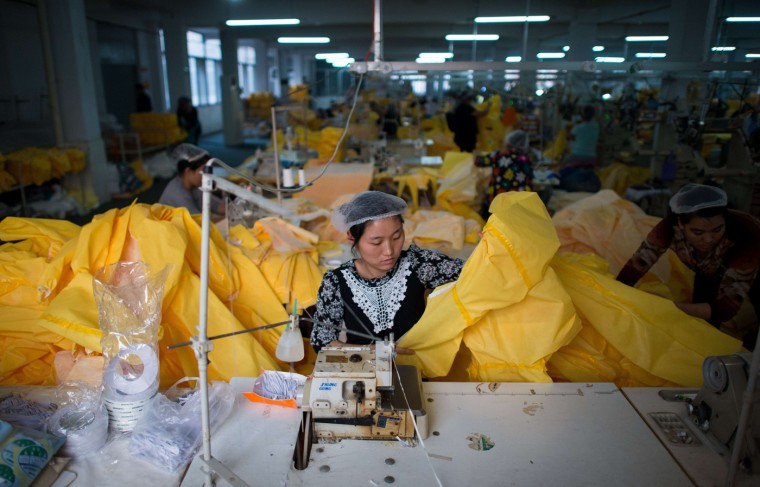 This photo taken on October 23 in Anqiu, some 500 kilometers south of Bejing, shows women working on the CT1SL428, a protective suit for use in handling people infected with the Ebola virus, in a sewing room of Lakeland Industries Inc. Lakeland, a global manufacturer of industrial protective clothing, produces suits to be worm by healthcare workers and others being exposed to Ebola. || CREDIT: JOHANNES EISELE – AFP/GETTY IMAGES 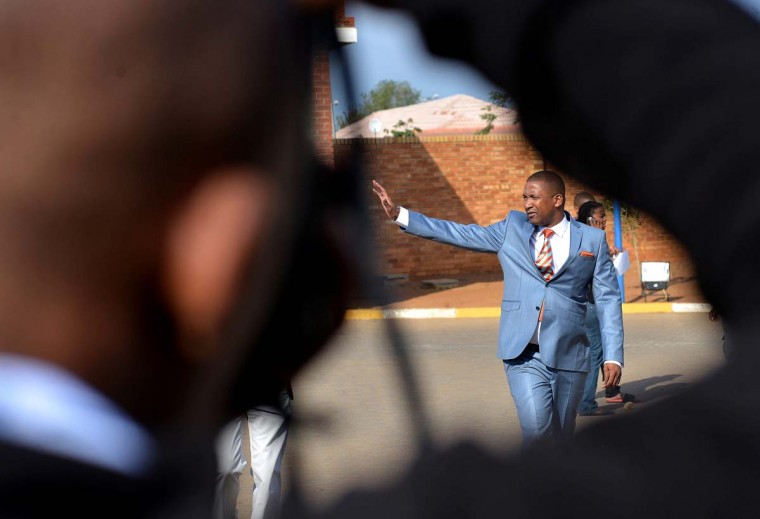 Duma Bok, President of the Umbrella for Democratic Change (UDC), Botswana’s main opposition group, greets queueing voters as he arrives to cast his vote at a polling station in Gaborone during the general elections in Botswana on October, 24. Voters went to the polls in Botswana’s general elections on October 24, with the ruling party facing an unprecedented test against an invigorated opposition in one of Africa’s most stable democracies. || CREDIT: MONIRUL BHUIYAN – AFP/GETTY IMAGES 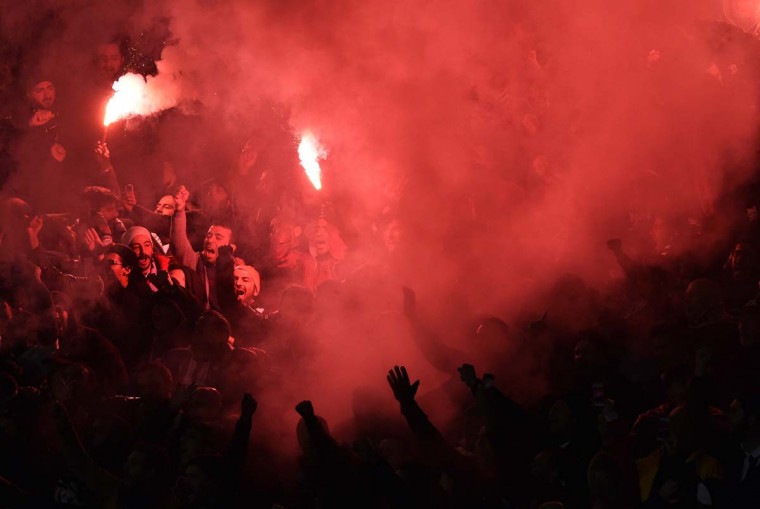 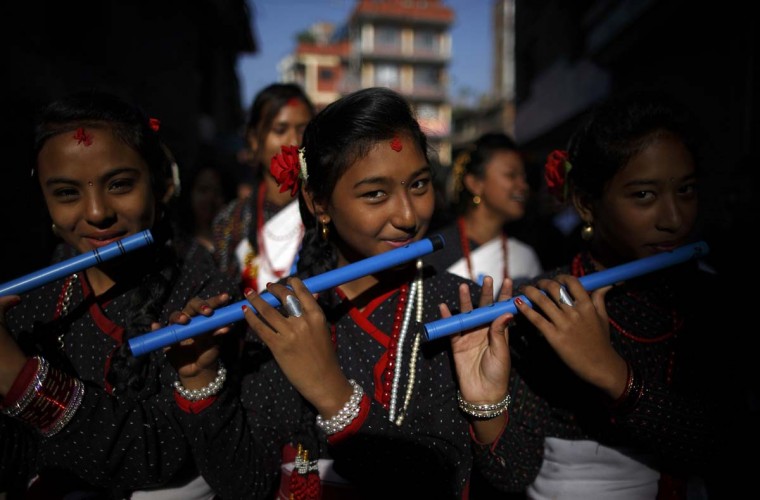 Girls play flutes as part of the Newari New Year parade that falls during the Tihar festival, also called Diwali, in Kathmandu on October 24. The Newar community observes the start of their Newari New Year 1134, in accordance with their lunar calendar, by worshipping their spiritual selves in a ritual known as “mahapuja”. || PHOTO CREDIT: NAVESH CHITRAKAR – REUTERS 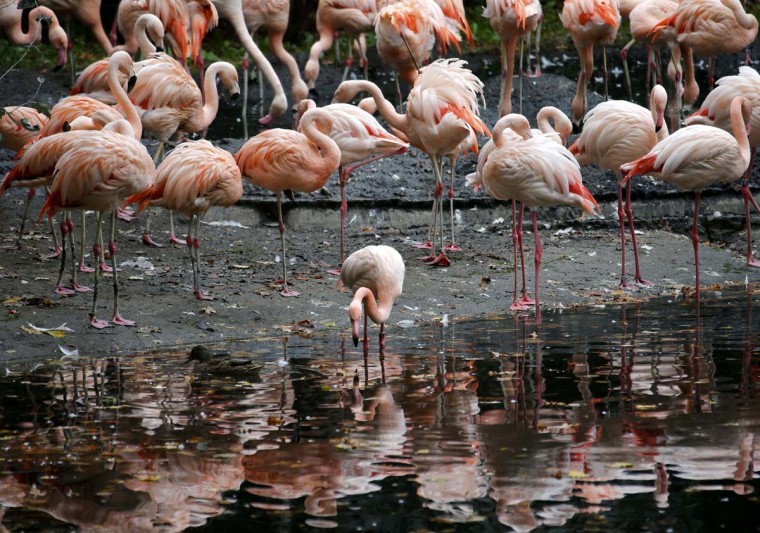 A flamboyance of flamingos stand in their enclosure at the zoo in Berlin, October 24. || PHOTO CREDIT: FABRIZIO BENSCH – REUTERS 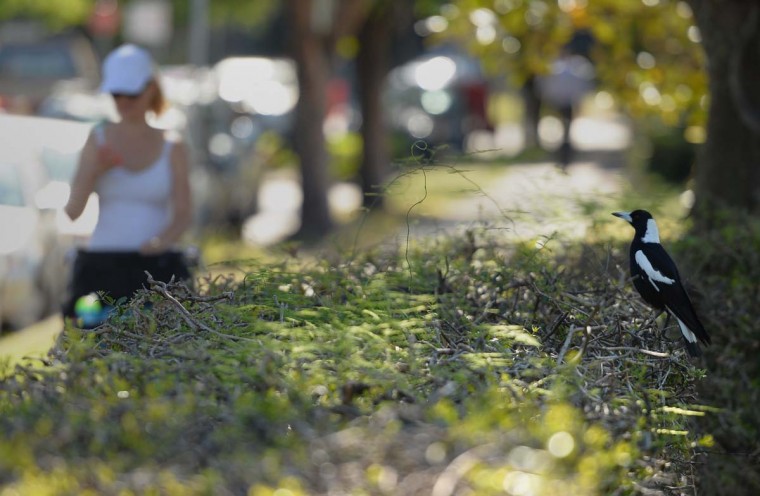 A magpie bird (R) sitting on a hedge as a woman passes by in Sydney earlier this month. Every year in spring, Australians don bicycle helmets with spikes or caps that have images of eyes on their back. This is not a fashion statement, but protection from swooping magpies, a quintessentially Australian experience. || CREDIT: PETER PARKS – AFP/GETTY IMAGES 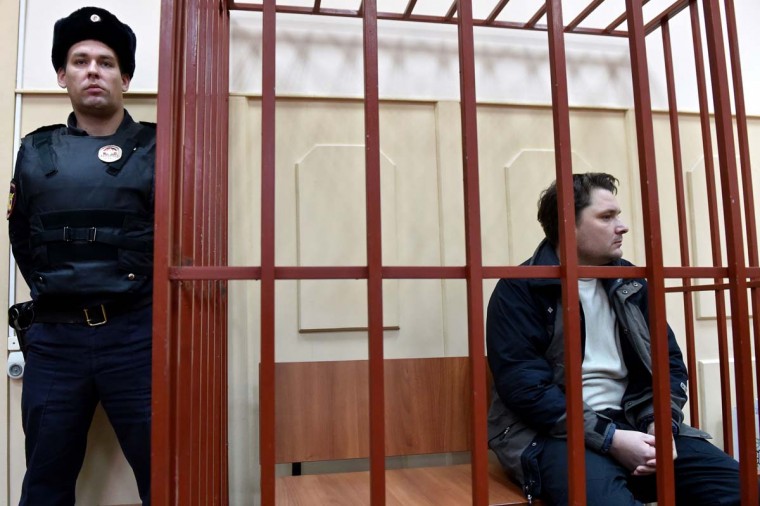