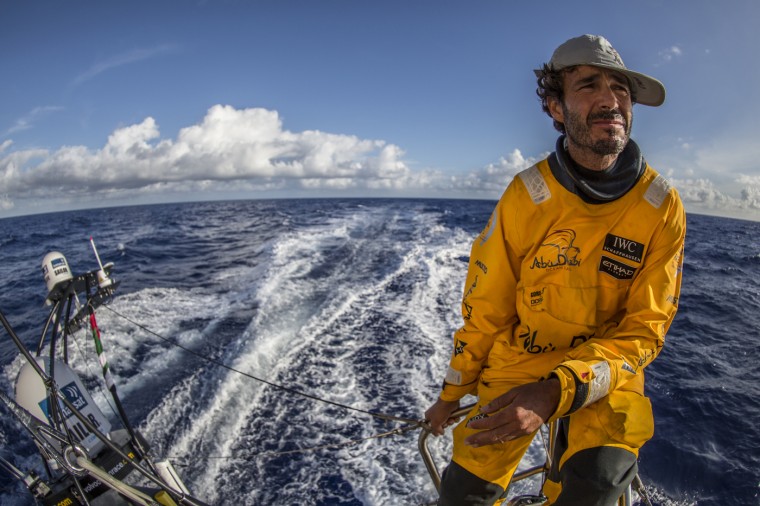 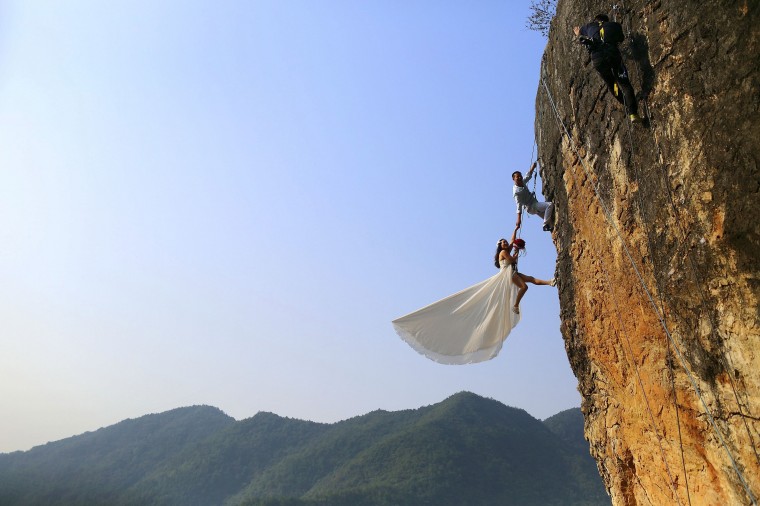 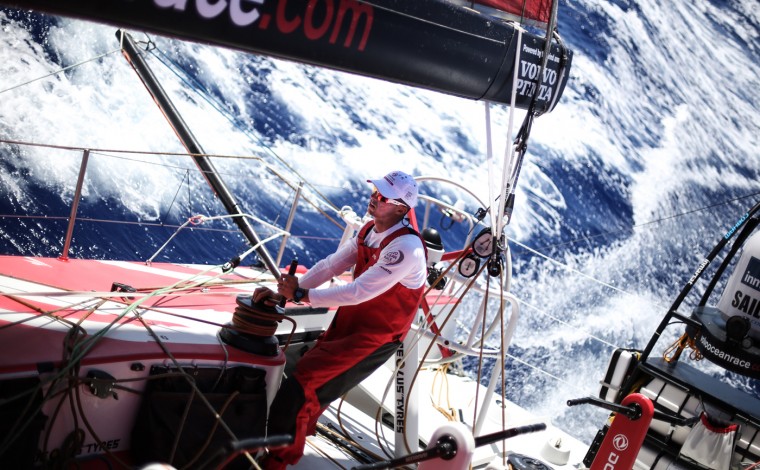 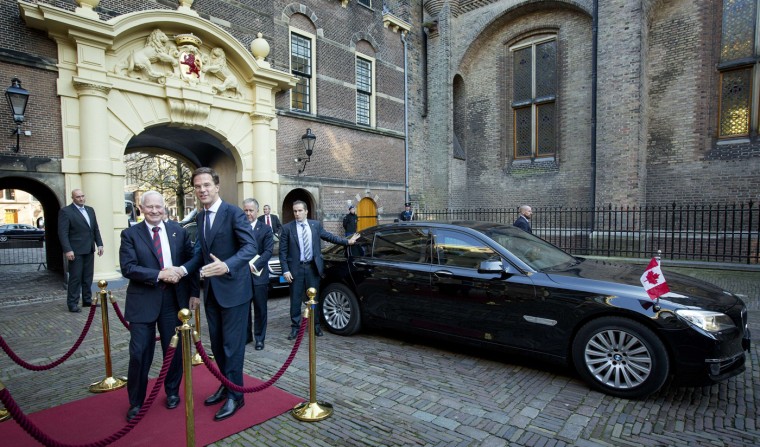 Dutch Prime Minister Mark Rutte (R) shakes hands with Canadian Governor General David Johnston (L) at the Parliament building in The Hague, on October 27, 2014. Johnston is on a two-day visit to The Netherlands. (AFP/Getty Images) 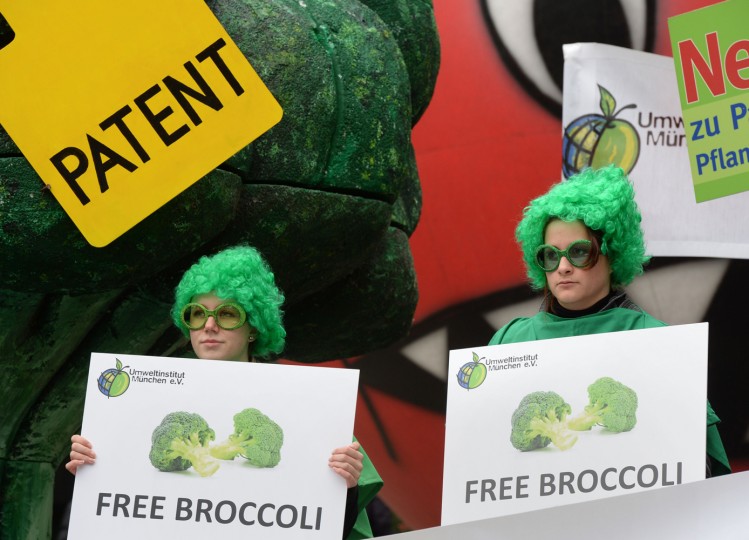 Ecological activists hold posters reading “free broccoli” as they demonstrate in front of the European Patent Office (EPO) in Munich, southern Germany, on October 27, 2014 to protest against patents on plants and animals. Oral proceedings in the socalled patenting case “Tomatoes / Broccoli II” on the breeding methods were scheduled on October 27, 2014 by EPO’s enlarged board of appeal. (Christof Stache/AFP/Getty Images) 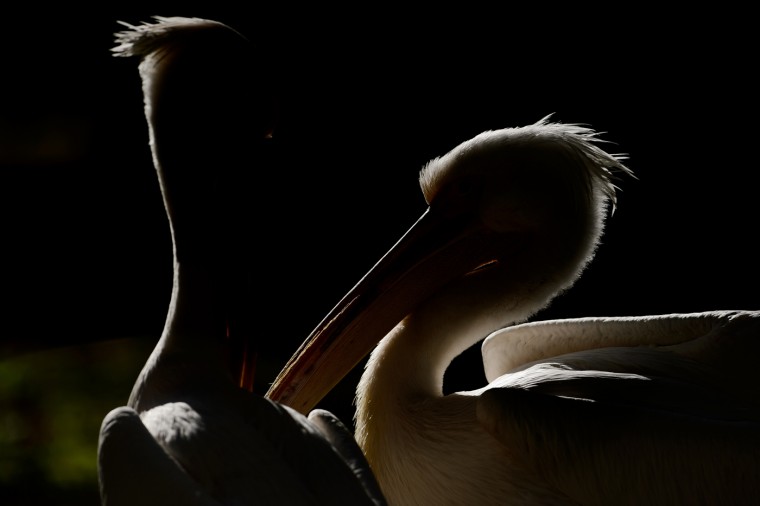 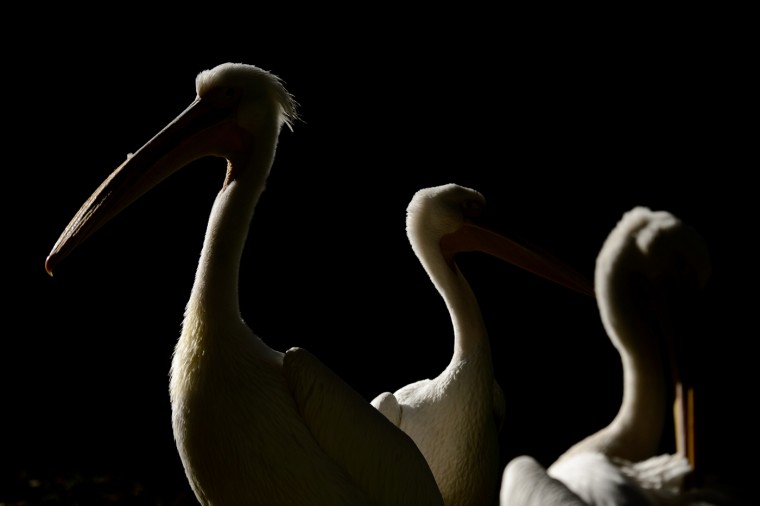 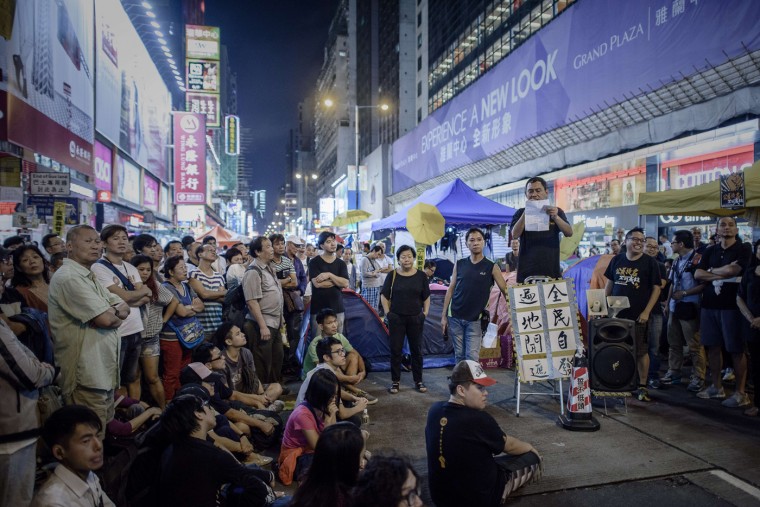 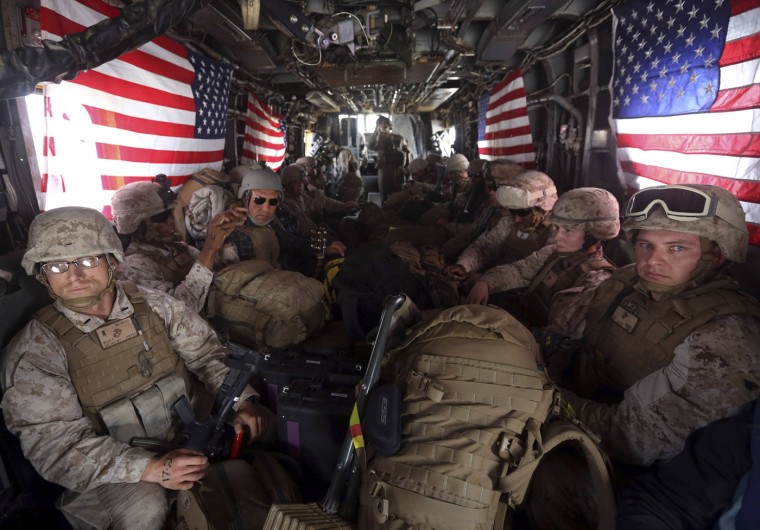 U.S. Marines are seen on board a helicopter at Kandahar air base upon the end of operations for the Marines and British combat troops in Helmand October 27, 2014. A fleet of planes and helicopters airlifted the last U.S. and British forces from a key base in southern Afghanistan on Monday, a day after the international coalition closed the massive facility and handed it over to the Afghan military. (Omar Sobhani/Reuters) 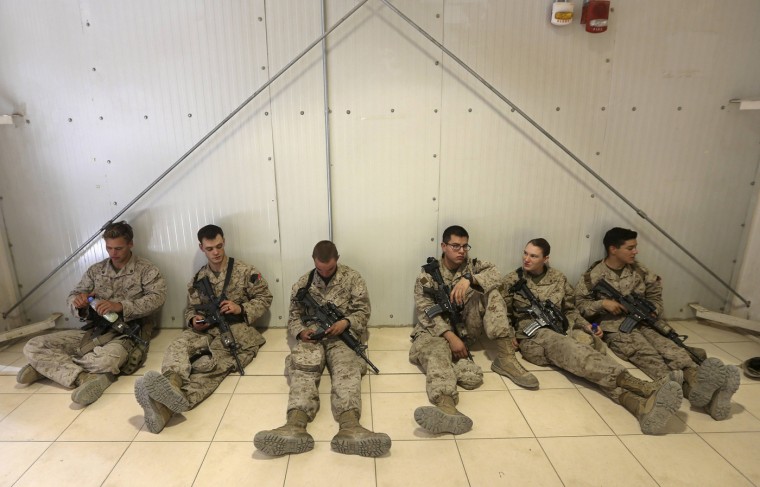 U.S. Marines rest as they prepare to depart upon end of operations for the Marines and British combat troops in Helmand October 26, 2014. British troops ended their combat operations in Afghanistan on Sunday as they and U.S. Marines handed over two huge adjacent bases to the Afghan military, 13 years after a U.S.-led invasion launched the long and costly war against the Taliban. Picture taken October 26, 2014. (Omar Sobhani/Reuters) 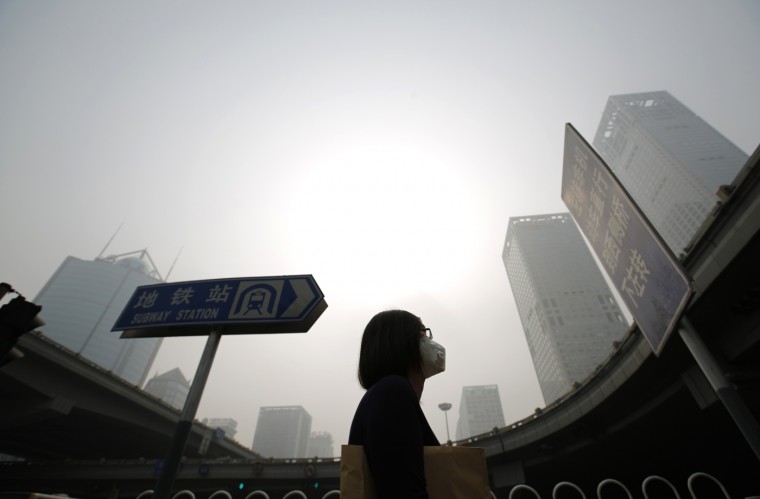 A woman wearing a mask makes her way on a street amid heavy haze and smog in Beijing, in this October 11, 2014 file picture. China’s capital is expected to face more heavy smog from October 29, 2014 as it battles to try to guarantee air quality ahead of an Asia-Pacific Economic Cooperation (APEC) summit starting on Saturday, forecasters said. Beijing and nearby regions will impose their most stringent pollution controls since the 2008 Summer Olympics as they bid to maintain air quality during the summit, which will be attended by U.S. President Barack Obama and other world leaders. (Kim Kyung-Hoon/Reuters) 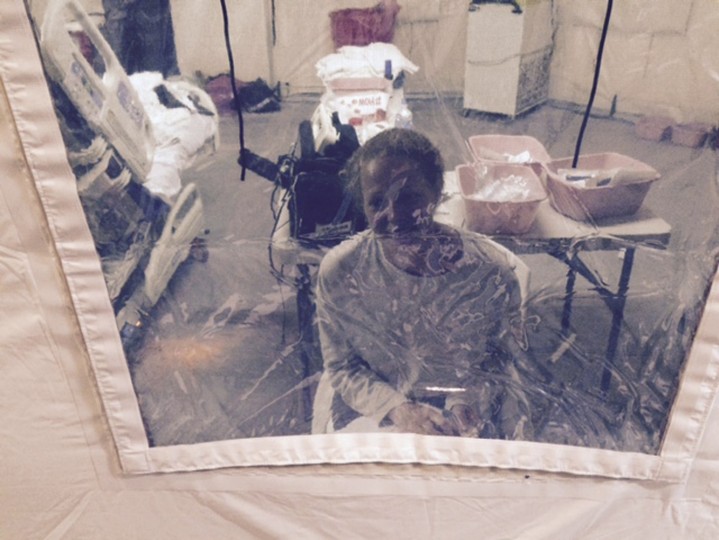 Kaci Hickox, a nurse who arrived in New Jersey on October 24 after treating Ebola patients in West Africa, speaks to her lawyer Norman Siegel from a hospital quarantine tent in Newark, New Jersey, October 26, 2014, in a photo provided by attorney Steve Hyman. Hickox will be allowed to go home, officials said on Monday. The nurse, who is held at a New Jersey hospital under the state’s Ebola quarantine policy, didn’t present any symptoms and could complete her quarantine at home, state Governor Chris Christie said on Twitter. Picture taken October 26, 2014. (Steve Hyman/Reuters)

Business people walk behind a tent left by pro-democracy protesters as they leave their building for a lunch break in a part of Hong Kong’s financial central district protesters occupy October 27, 2014. Hong Kong has been roiled by a tenacious, student-led people’s movement demanding full democracy in the former British colony that returned to Chinese rule in 1997. (Damir Sagolj/Reuters) 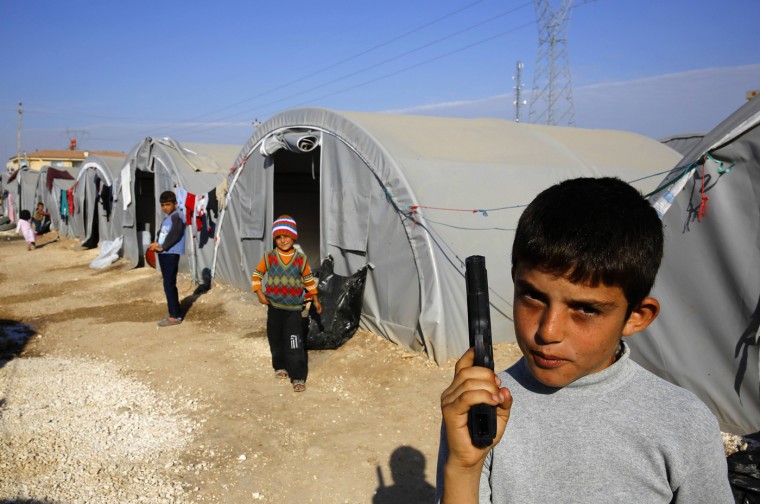 A young Kurdish refugee from Kobani holds a toy pistol at a Kurdish refugee camp in the border town of Suruc, Sanliurfa province October 27, 2014. (Yannis Behrakis/Reuters) 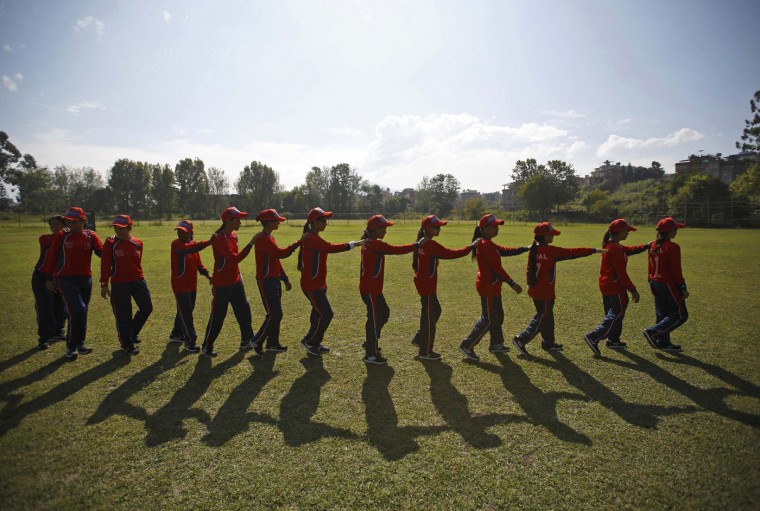 Members of the Nepalese blind cricket team walk on the field before their game at the three-day T20 International Blind Women Cricket Tournament between Nepal and Britain in Lalitpur October 26, 2014. The competition, which is the world’s first all-female blind cricket tournament and organized by the Cricket Association of the Blind, Nepal (CAB Nepal), runs from October 26 to October 28. Picture taken October 26, 2014. (Navesh Chitrakar/Reuters) 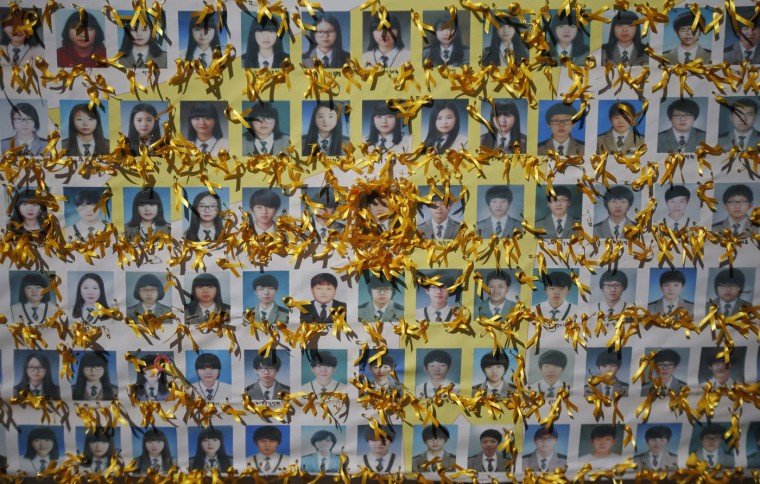 Portraits of students who died in the mid-April Sewol ferry disaster, decorated by yellow ribbons dedicated to the victims, are pictured in central Seoul October 27, 2014. South Korean prosecutors on Monday sought the death penalty for Lee Joon-seok, 68, the captain of the ferry that capsized in April, leaving 304 people dead or missing. (Kim Hong-Ji/Reuters)

« Building the New York subway system, 110 years ago » Inside the factory where Ebola protective suits are made