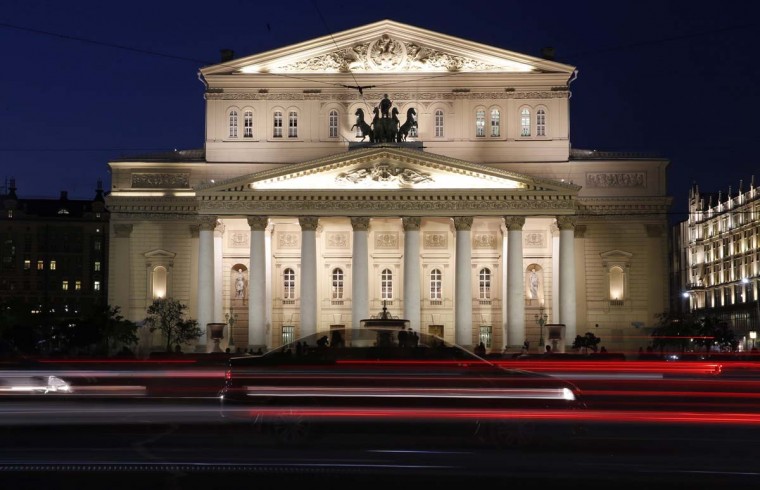 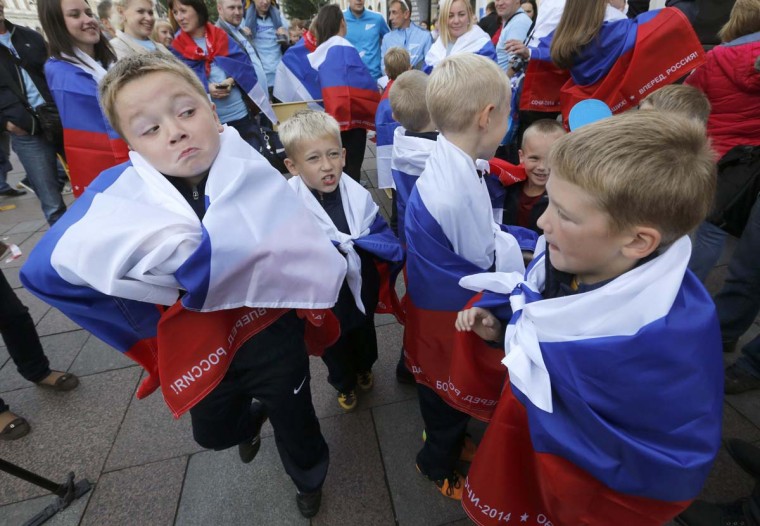 Boys wearing Russian national flags react on September 19 after St. Petersburg was announced as one of the 13 cities that will host matches at the Euro 2020 tournament to be played across the continent in St. Petersburg. Quarter-final matches will be played in Baku, Munich, Rome and St. Petersburg with last 16 ties in Copenhagen, Amsterdam, Bucharest, Dublin, Bilbao, Budapest, Brussels and Glasgow. || PHOTO CREDIT: ALEXANDER DEMIANCHUK – REUTERS 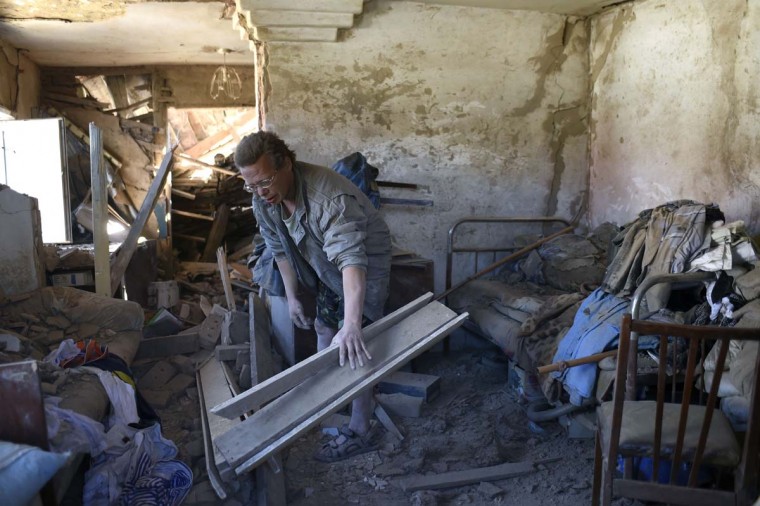 A man removes debris from a destroyed house which was hit by a rocket overnight killing one man, on September 19 in the Oktiabrskiy district of the rebel-held eastern Ukrainian city of Donetsk. At least four rockets hit three houses overnight, killing one man living in the neighborhood, next to a cement factory occupied by pro-russian militants. || CREDIT: PHILIPPE DESMAZES – AFP/GETTY IMAGES 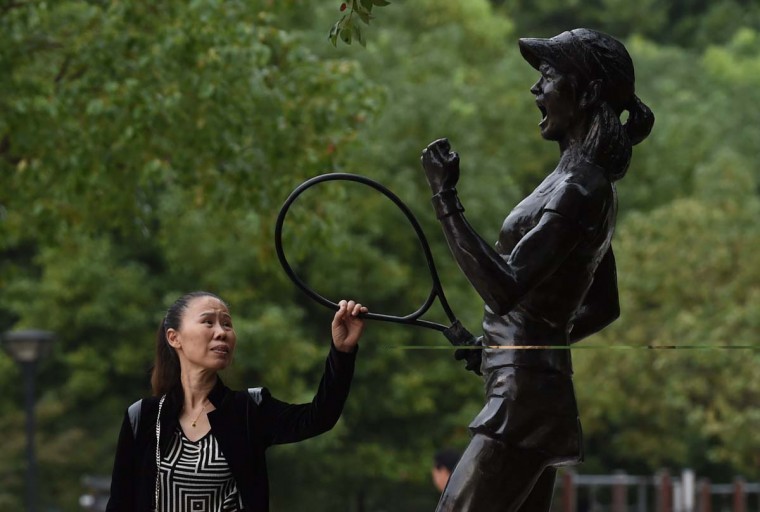 A woman reaches out to touch a statue of Chinese tennis star Li Na at a park in Wuhan, her hometown, in China’s Hubei province on September 19. Li announced her retirement September 19, saying injuries had forced her out of tennis just seven months after she won the Australian Open. || CREDIT: GREG BAKER – AFP/GETTY IMAGES 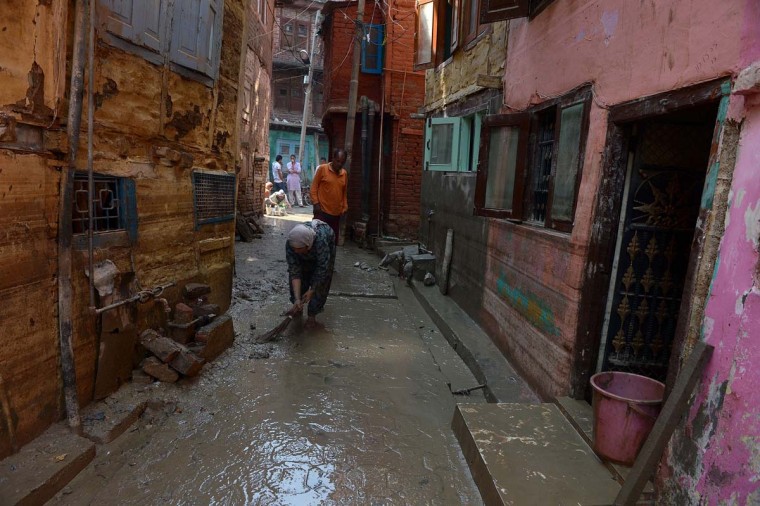 A Kashmiri woman clears mud from an alley between flood-damaged houses in central Srinagar on September 19. The main city in Indian Kashmir has “drowned completely” under floodwaters, a senior official said, with the deadly inundation now affecting about two million people in neighbouring Pakistan and threatening its all-important cotton industry. || CREDIT: TAUSEEF MUSTAFA – AFP/GETTY IMAGES 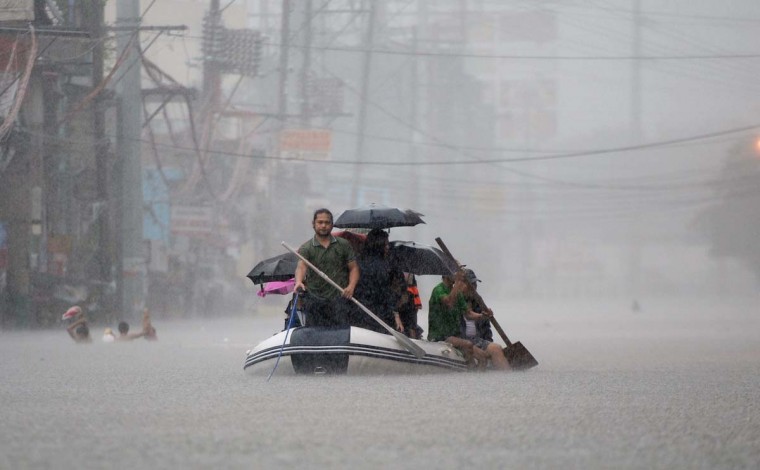 Stranded passengers are ferried through a flooded street during heavy rains brought on by tropical storm Fung-Wong in Manila on September 19. Tropical storm Fung-Wong dumped heavy rains that shut down Manila early on September 19, forcing thousands of residents to flee as the the weather disturbance approached the northern Philippines, officials said. || CREDIT: TED ALJIBE – AFP/GETTY IMAGES 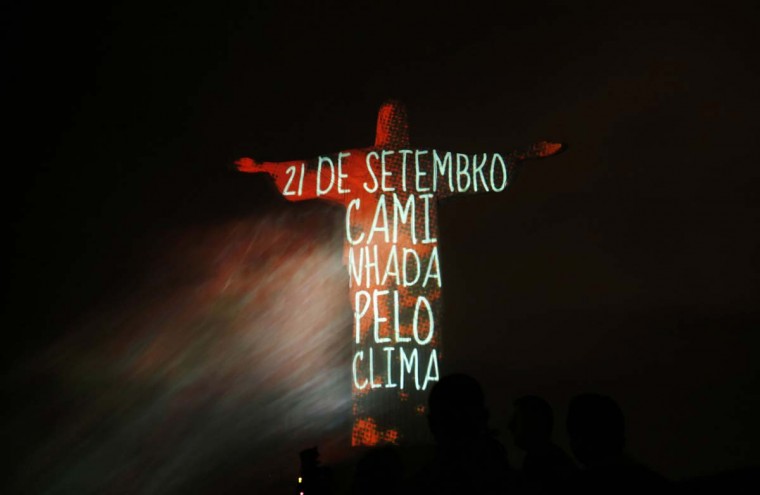 The statue of Christ the Redeemer is lit up with a message announcing a global mobilisation for climate, in Rio de Janeiro September 18. The People’s Climate march is a demonstration to raise awareness about climate change, which will be held on September 21 around the world, in advance of the United Nations Climate Summit to be held on September 23. More than 100,000 people are expected to take part in the New York portion of the protest, according to Reuters. The words read, “September 21, march for the climate.” || PHOTO CREDIT: PILAR OLIVARES – REUTERS 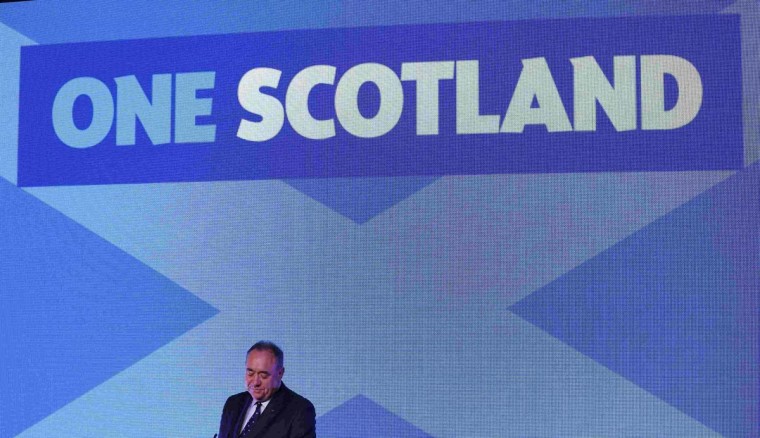 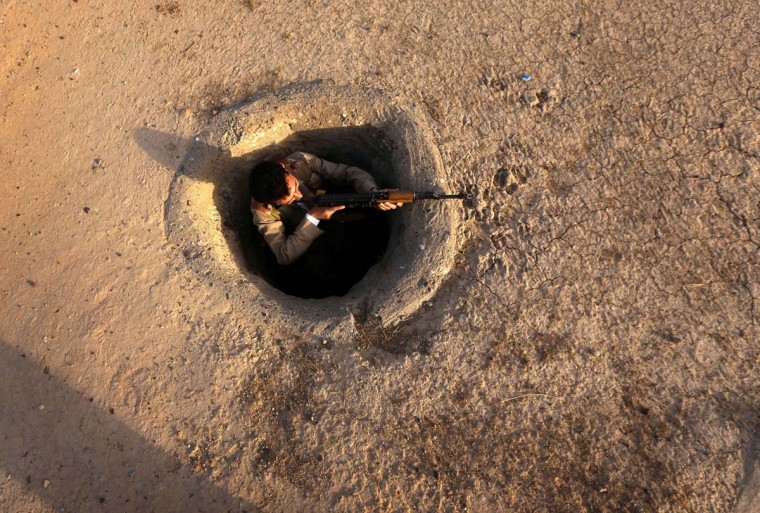 A Kurdish Peshmerga fighter holds a position on the front line in the Gwer district, 40 kilometres south of Arbil, the capital of the Kurdish autonomous region in northern Iraq, on September 18. France said that it will follow the United States in launching air strikes against the Islamic State group in Iraq, as the jihadists posted their latest video of a Western hostage. || CREDIT: SAFIN HAMED – AFP/GETTY IMAGES 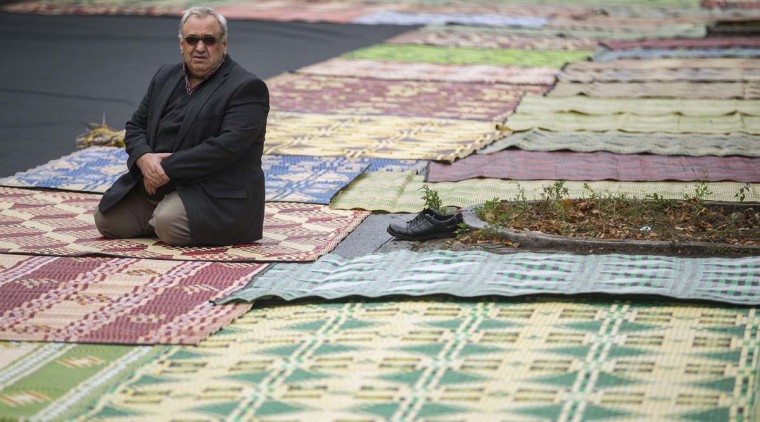 A Muslim waits to perform Friday prayers on Skalitzer Strasse (street) in Berlin September 19. More than 2,000 German mosques have invited Germans of all religions to join their Friday prayers to present a united front against the Islamic State to try to dissuade young Muslims from travelling to fight with radical Islamists in Syria and Iraq. || PHOTO CREDIT: HANNIBAL – REUTERS 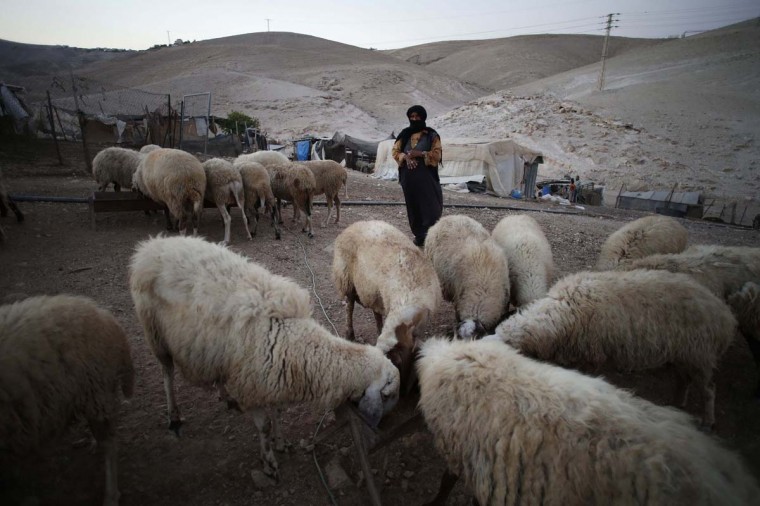 A Palestinian Bedouin woman stands next to her sheep in the West Bank village of Al-Eizariya, near east of Jerusalem September 18. As part of a plan to remove them from Area C that is under both Israel’s civilian and military aegis, the Israeli Civil Administration is expected to start evicting Bedouins in the West Bank from lands they have been living on for decades. The first measure to be taken is relocating nearly 2,400 Bedouins living in an area east of Jerusalem to expand the settlement of Ma’aleh Adumim and other settlements, according to Israeli local media. || PHOTO CREDIT: AMMAR AWAD – REUTERS 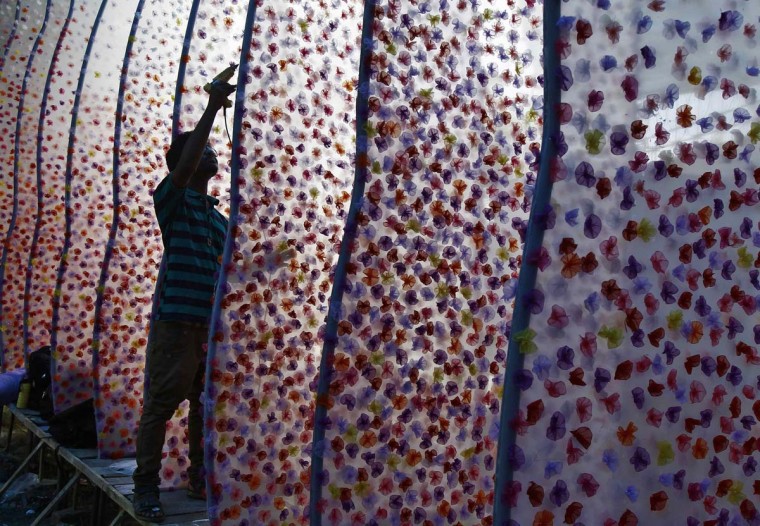 A man works on a Pandal, a temporary platform, being built for the Durga Puja festival, in Kolkata September 19. The Durga Puja festival will be celebrated from September 30 to October 3, and is the biggest religious event for Bengali Hindus. Hindus believe that the goddess Durga symbolises power and the triumph of good over evil. || PHOTO CREDIT: RUPAK DE CHOWDHURI – REUTERS 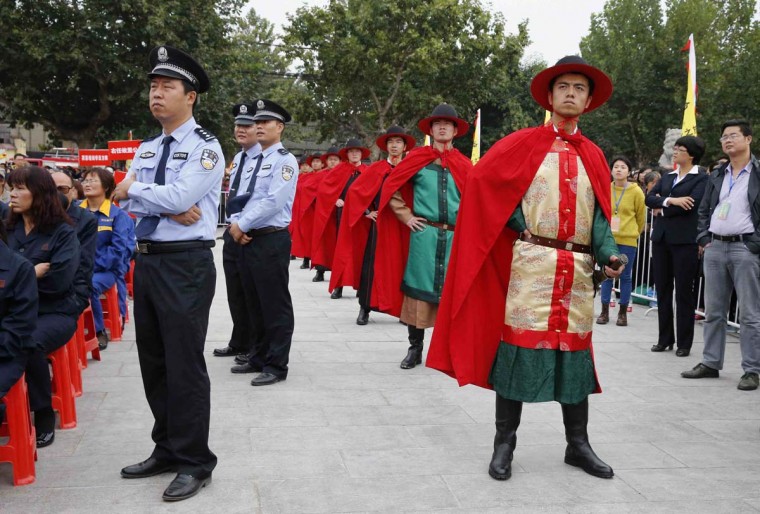 Performers dressed as security guards from ancient China stand next to police officers during an inauguration ceremony of the Silk Road Cultural Journey, in Jingyang, Shaanxi province September 19. Organized by Shaanxi government and a local tea company, the journey, started on Friday in Jingyang, Shaanxi province and was expected to finish in Kazakhstan more than a year later. A total of 136 camels, eight horse-drown carriages and more than 100 people in ancient Chinese costumes will travel an estimated 15,000 kilometers (9,321 miles) along the Silk Road with tea leaves while giving performances and promoting the tea products on the way, local media reported. || CREDIT: ROONEY CHEN – REUTERS 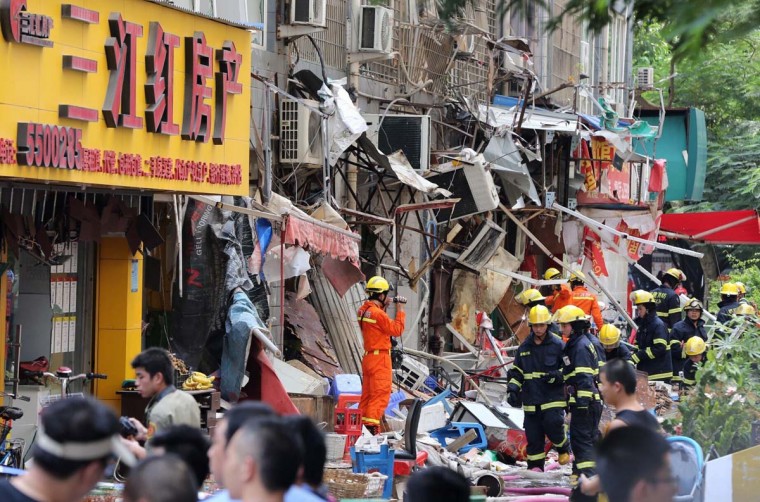 Firefighters work at the site of an explosion in Xiamen, Fujian province September 19. At least four people were killed and 10 others were in critical condition after a gas explosion in a restaurant on Friday in the eastern Chinese city of Xiamen, Xinhua News Agency reported. || PHOTO CREDIT: STRINGER – REUTERS 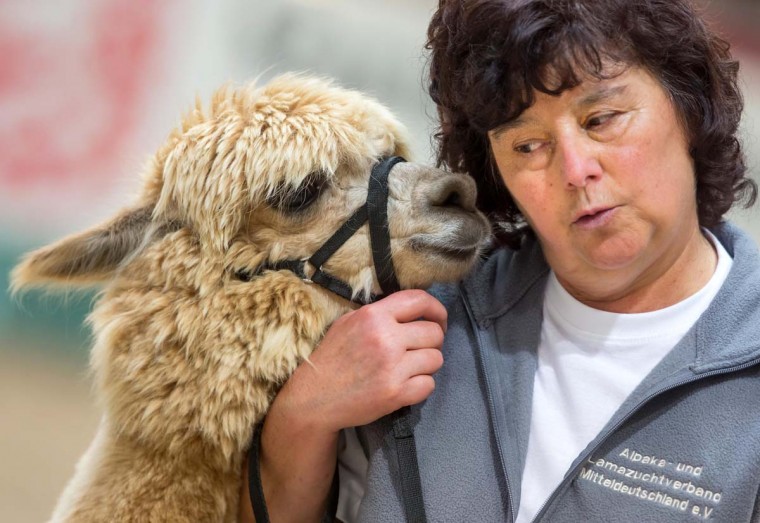 A woman holds her alpaca during the fair “Gruene Tage” (Green Days) in Erfurt, eastern Germany, on September 19. The agriculture fair runs from September 19 to 21. ||CREDIT: MICHAEL REICHEL – AFP/GETTY 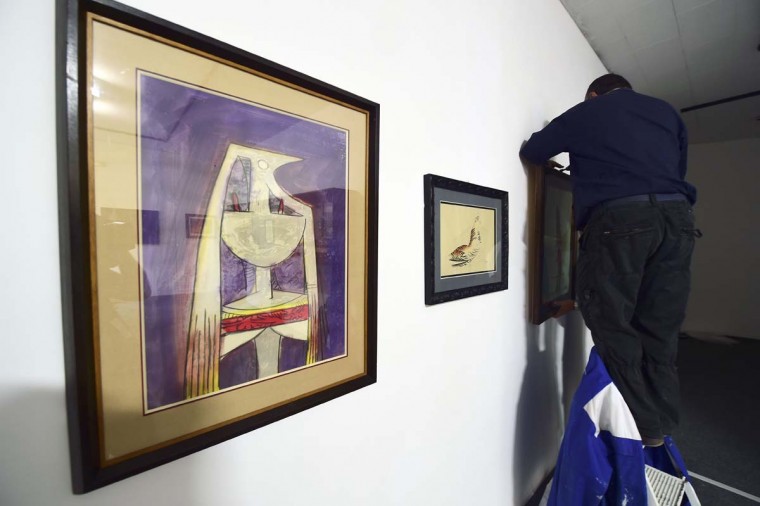 A municipal Employee installs works of art that belonged to the “pope” of surrealism, the poet and writer André Breton, on September 17, at the Henri-Martin museum in Cahors, southwestern France. The exhibition which features over 350 works and is entitled “The Glass House” (Maison de Verre) will run from September 20 to December 29, 2014. || CREDIT: ERIC CABANIS – AFP/GETTY IMAGES 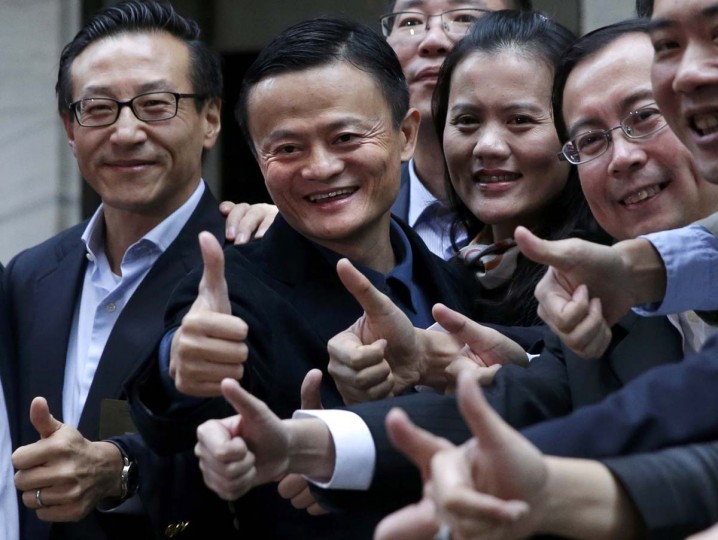 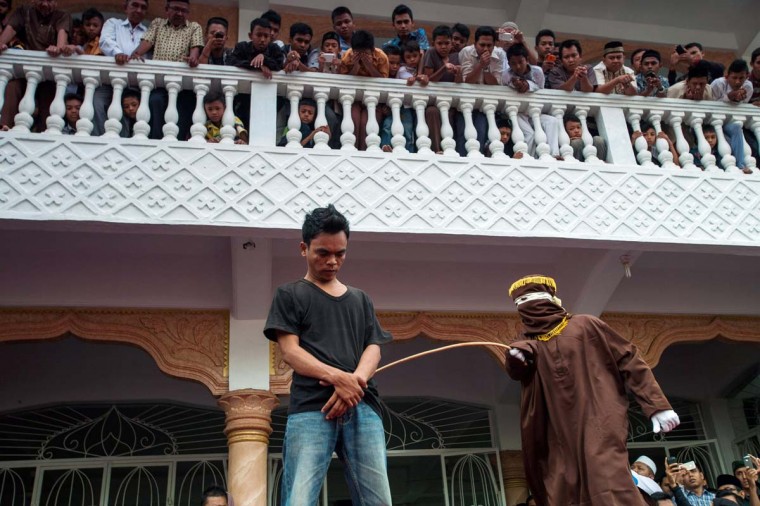 A masked and hooded official (R) canes an Acehnese man for gambling in Banda Aceh on September 19. Nine men were caned in public on September 19 in Aceh, the only province to implement sharia law, for gambling. || CREDIT: CHAIDEER MAHYUDDIN – AFP/GETTY IMAGES 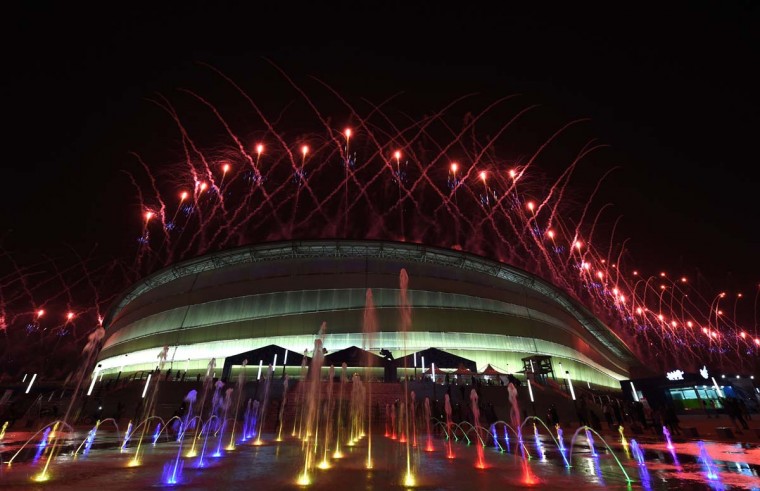 Fireworks illuminate the night sky during the opening ceremony of the 2014 Asian Games at the Incheon Asiad Main Stadium in Incheon on September 19. || CREDIT: INDRANIL MUKHERJEE – AFP/GETTY IMAGES 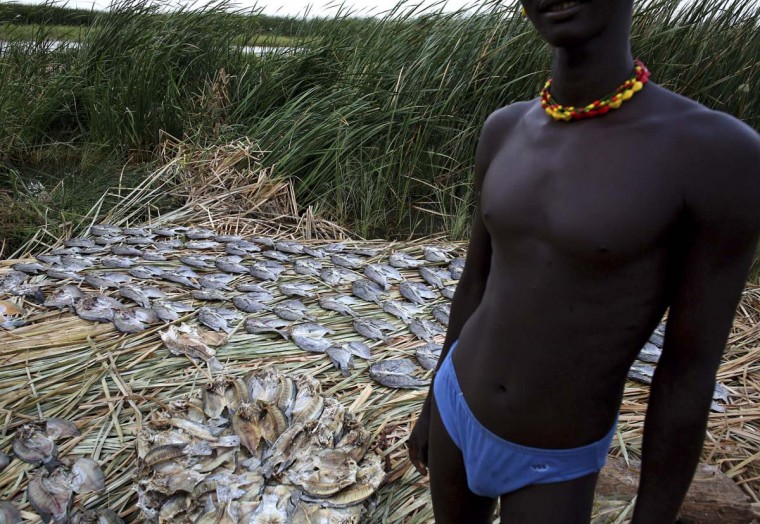 A Dassanach fisherman stands on floating reeds at a fishing camp near the Omo Delta in the north of Lake Turkana close to the town of Ileret and near the Kenyan-Ethiopian border in northern Kenya September 19. The Dassanach, an ethnic group living mainly in southern Ethiopia, have historically clashed over ethnic differences and precious resources such as fishing, pasture and fresh water with the Turkana of Kenya. || PHOTO CREDIT: GORAN TOMASEVIC – REUTERS 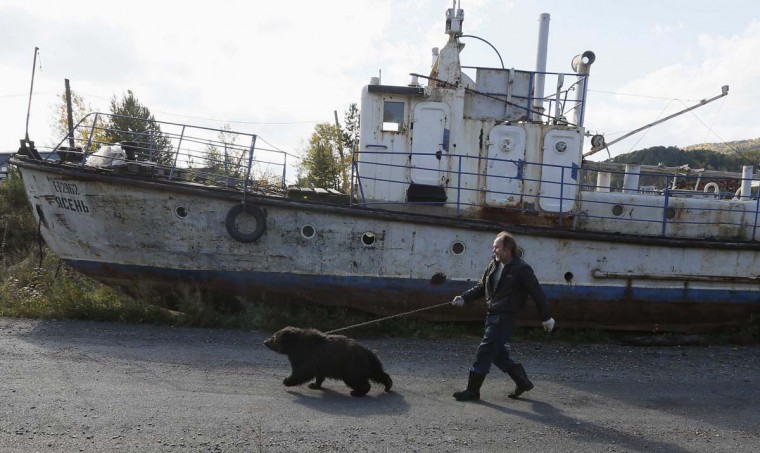 Alexander Kharatokin walks with a 9-month-old brown bear named Masha after it bathed in the Yenisei River outside Krasnoyarsk, Siberia, September 19. Kharatokin, a homeless man and a watchman of a mooring, lives in a wooden hovel near the river. Under the permission of his employer, Kharatokin adopted the orphan bear that was found this spring. He plans to continue living with the bear, whom will be moved to a new larger enclosure after it is constructed. || PHOTO CREDIT: ILYA NAYMUSHIN – REUTERS