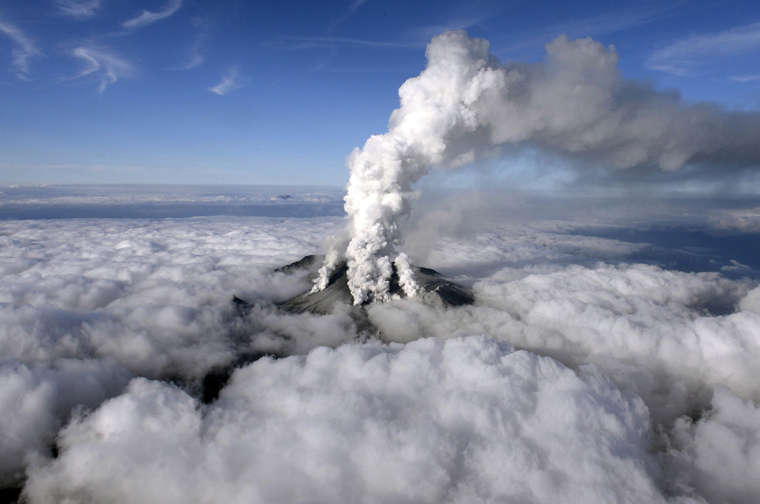 Volcanic smoke rises from Mount Ontake, which straddles Nagano and Gifu prefectures, central Japan, on Saturday in this photo taken and released by Kyodo. (REUTERS/Kyodo) 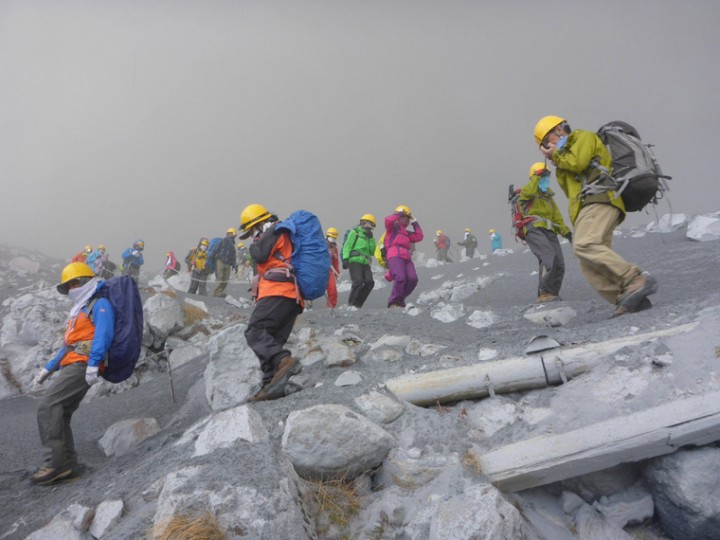 Climbers descend Mt. Ontake, which straddles Nagano and Gifu prefectures, to evacuate as volcanic ash falls at the mountain in central Japan on Saturday, in this photo taken by a climber and released by Kyodo. (REUTERS/Kyodo) 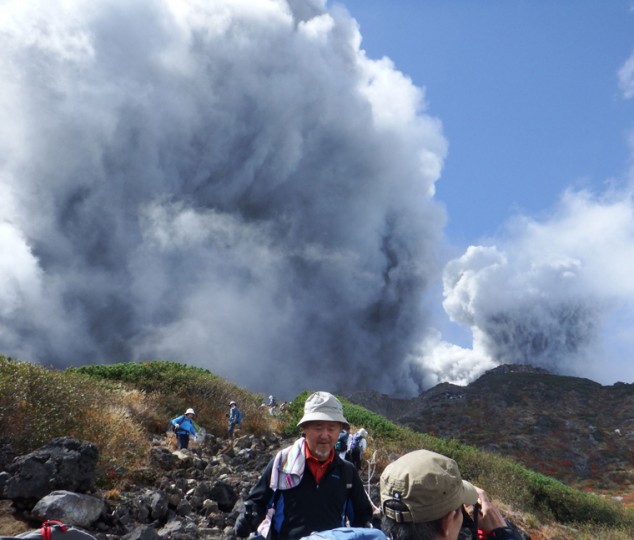 Climbers descend Mt. Ontake to evacuate as the volcano erupts in central Japan Saturday in this photo taken by a climber and released by Kyodo. (REUTERS/Kyodo) 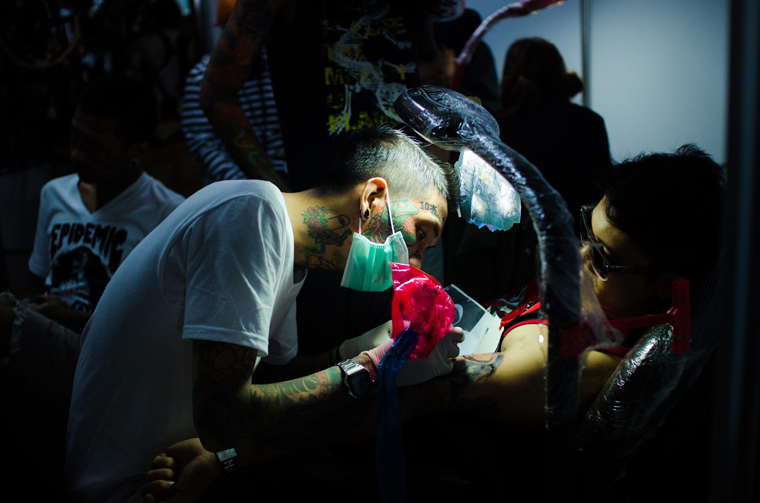 A man gets tattooed by a tattoo artist during the Dutdutan Tattoo Festival on Saturday in Manila, Philippines. The festival is the biggest tattoo exposition in Asia attracting enthusiasts from Taiwan, Malaysia, Singapore, Japan, Guam, Germany and the United States. (Dondi Tawatao/Getty Images) 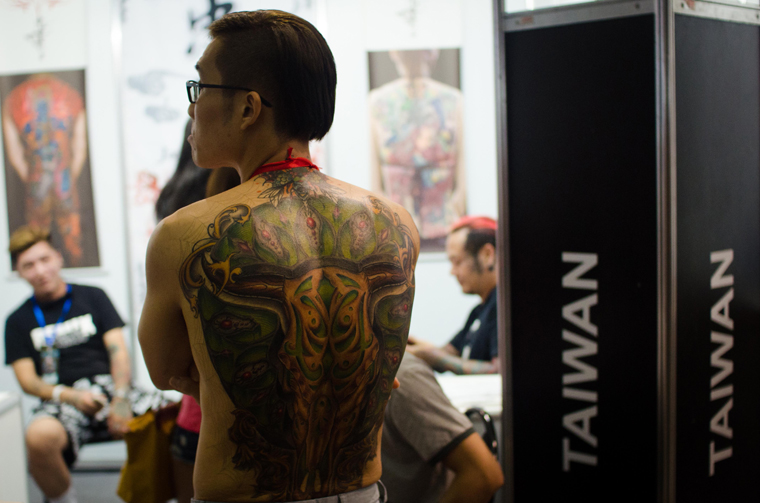 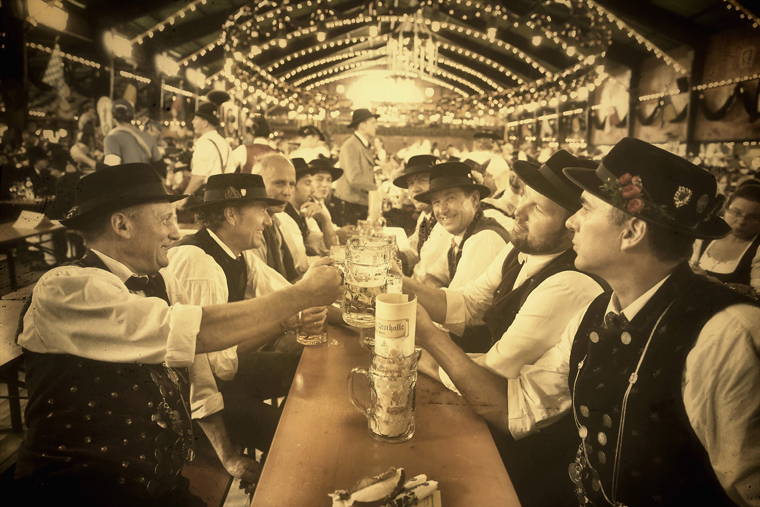 EDITOR’S NOTE: Image was processed using digital filters | Men in their traditional Bavarian clothing clink beer mugs after the Parade of Costumes and Riflemen on the second day of the 2014 Oktoberfest at Theresienhoehe on Sunday in Munich, Germany. (Alexander Hassenstein/Getty Images) 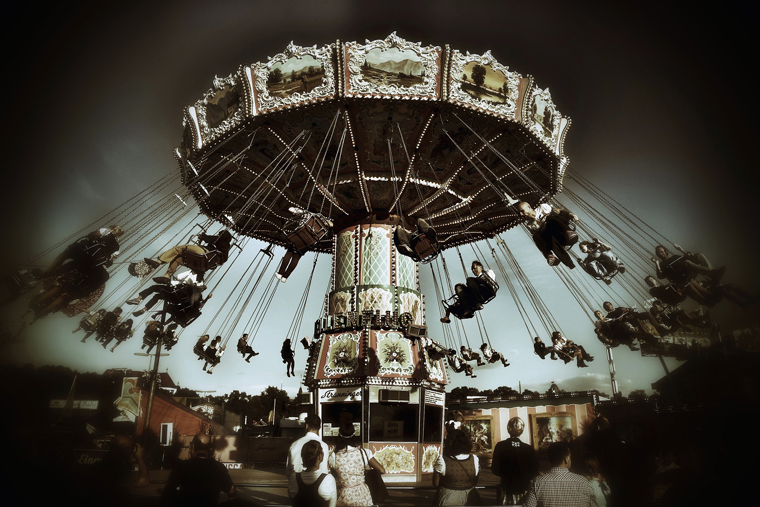 EDITOR’S NOTE: Image was processed using digital filters | Visitors dressed in traditional Bavarian clothing Dirnd and Lederhosen enjoy riding on a merry-go-round on the opening day of the 2014 Oktoberfest at Theresienwiese on Sept. 20, 2014 in Munich, Germany. (Alexander Hassenstein/Getty Images) 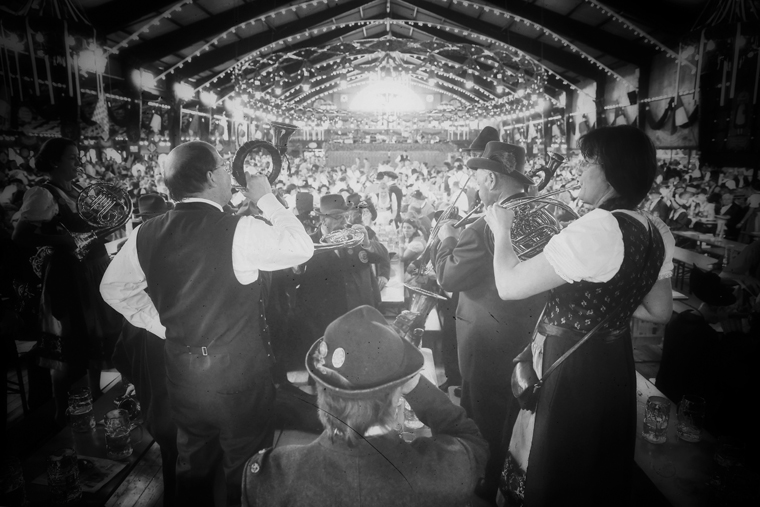 EDITOR’S NOTE: Image was processed using digital filters | Bavarian brass band in their tradiitional clothing performe at Augustiner Beer tent after the Parade of Costumes and Riflemen (Trachten- und Schuetzenzug) on the second day of the 2014 Oktoberfest at Theresienhoehe on Sunday in Munich, Germany.(Alexander Hassenstein/Getty Images) 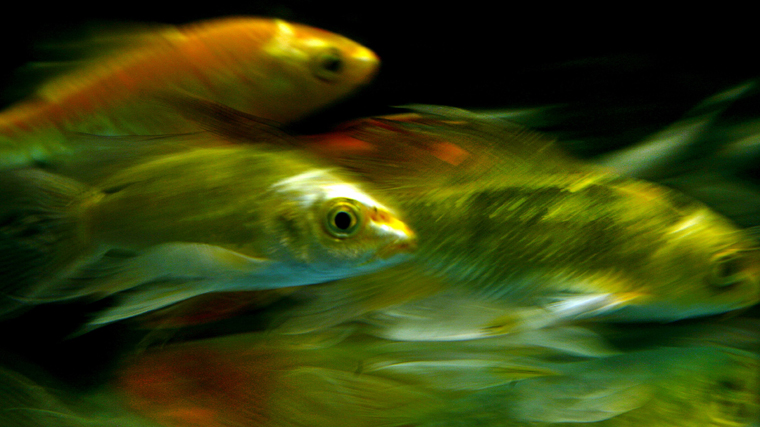 Koi carp fish are seen inside an aquarium at the exhibition “Aquaforum” in Minsk on Saturday. (SERGEI GAPONSERGEI/GAPON/AFP/Getty Images) 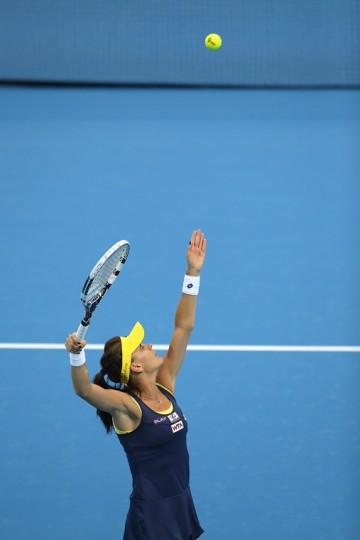 Agnieszka Radwanska of Poland serves against Coco Vandeweghe of the United States during day one of the China Open at the China National Tennis Center on Saturday in Beijing, China. (Emmanuel Wong/Getty Images) 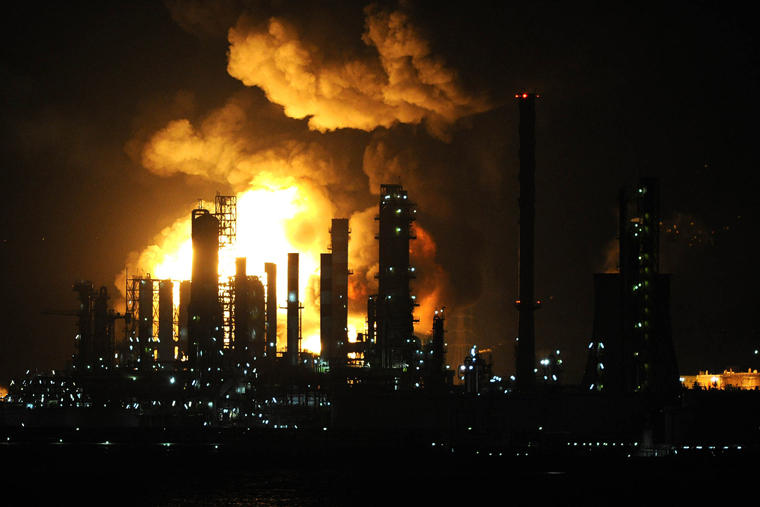 Flames arise after a fire broke out at the Mediterranean Refinery of Milazzo, one of most important in southern Italy, in Milazzo, near Messina on Sicily Island on Saturday. (GIOVANNI ISOLINOGIOVANNI ISOLINO/AFP/Getty Images) 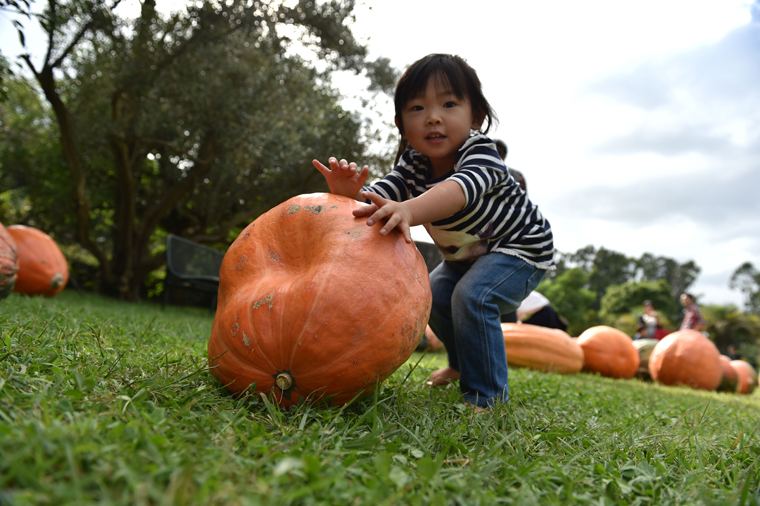 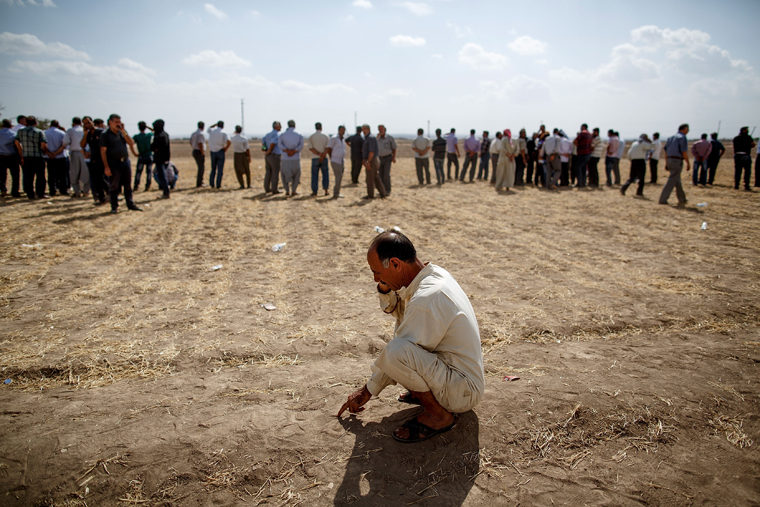 A Kurdish man telephoned as Kurdish people from the region gather next to the borderfence to see the fighting between the Islamic State fighters and the Kurdish Armee Peshmergas on Saturday in the village Mert Ismail in south of Sanliurfa, Turkey. (Carsten Koall/Getty Images) 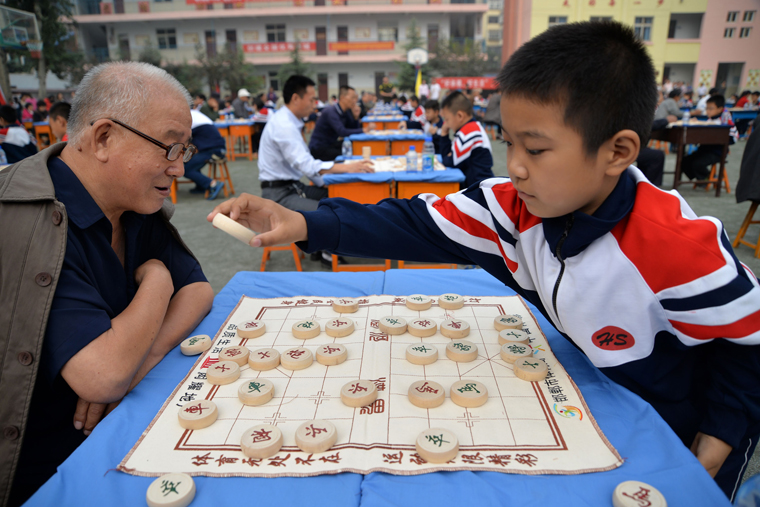 A pupil plays Chinese chess with a man to celebrate the Chung Yeung Festival on Saturday in Handan, China. (ChinaFotoPress via Getty Images) 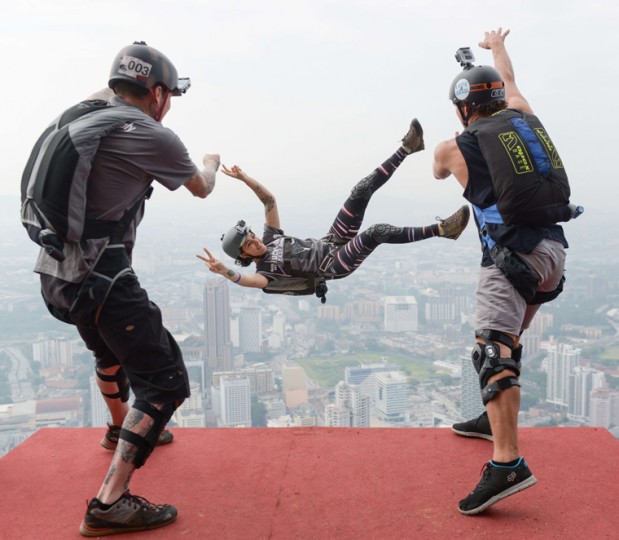 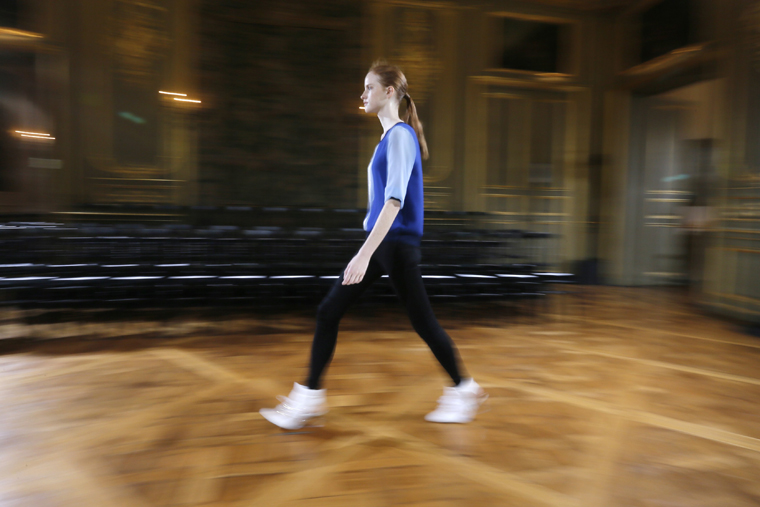 A model walks the runway during a rehearsal before the presentation of Dutch designers Viktor Horsting and Rolf Snoeren Spring/Summer 2015 women’s ready-to-wear collection for Viktor & Rolf fashion house during Paris Fashion Week on Saturday. (Gonzalo Fuentes/REUTERS) 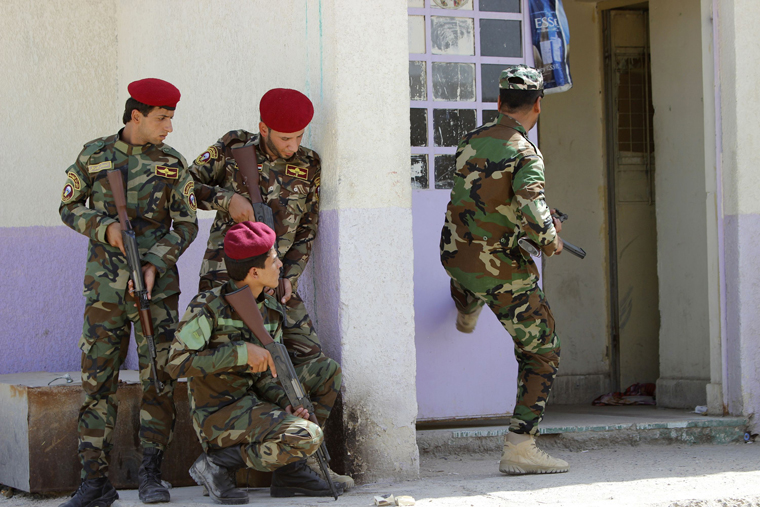 Shi’ite volunteers, who have joined the Iraqi army to fight against militants of the Islamic State, take part in a field training in Basra, southeast of Baghdad, on Saturday. (Essam Al-Sudani/REUTERS) 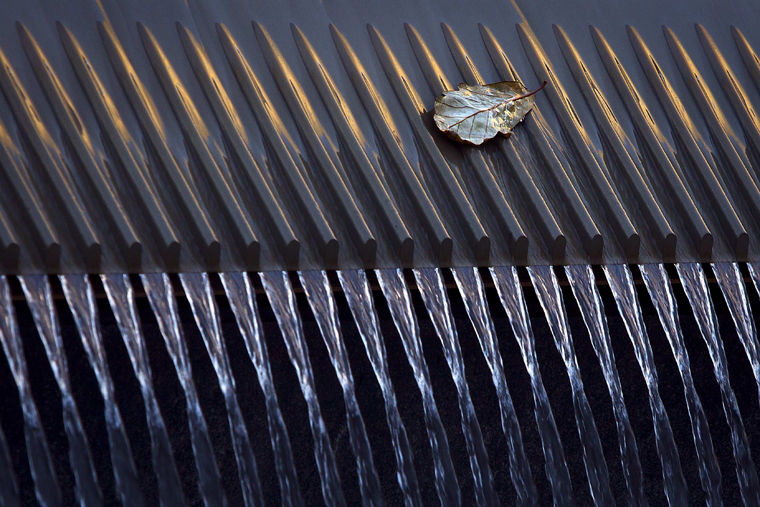 A fallen leaf is trapped at the edge of the pool at the 9/11 Memorial in the Manhattan borough of New York on Saturday. (Carlo Allegri/REUTERS) 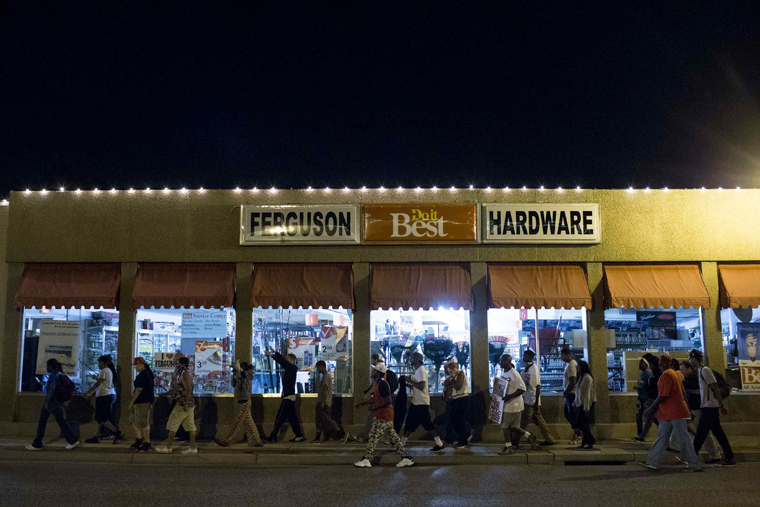 Protesters march during a rally in Ferguson, Missouri on Friday. Protests continued for a second night following Thursday’s clashes between policemen and demonstrators in Ferguson. (Whitney Curtis /REUTERS) 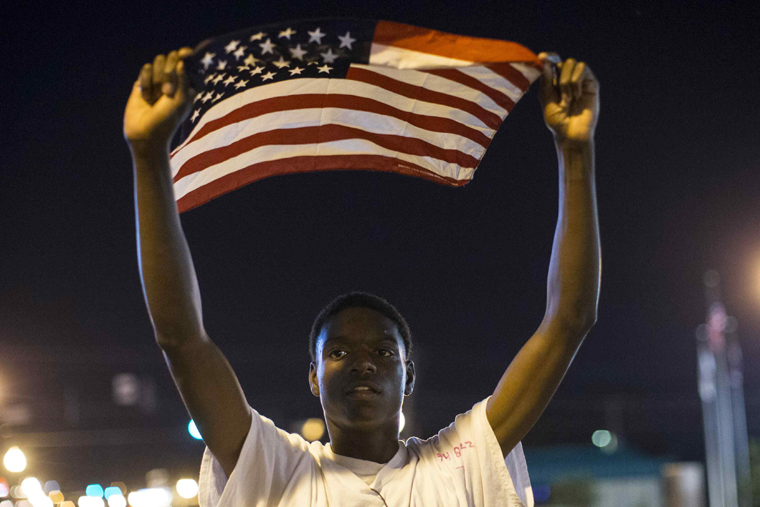 Protester Joshua Wilson marches in front of the police department during a rally in Ferguson, Missouri on Friday. (Whitney Curtis/REUTERS)