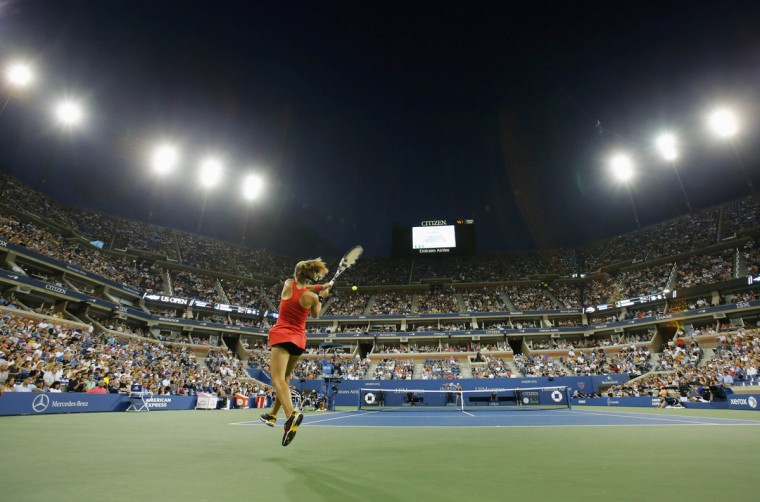 Aleksandra Krunic of Serbia returns a shot to Victoria Azarenka of Belarus during their women’s singles match at the 2014 U.S. Open tennis tournament in New York, September 1, 2014. (REUTERS/Adam Hunger) 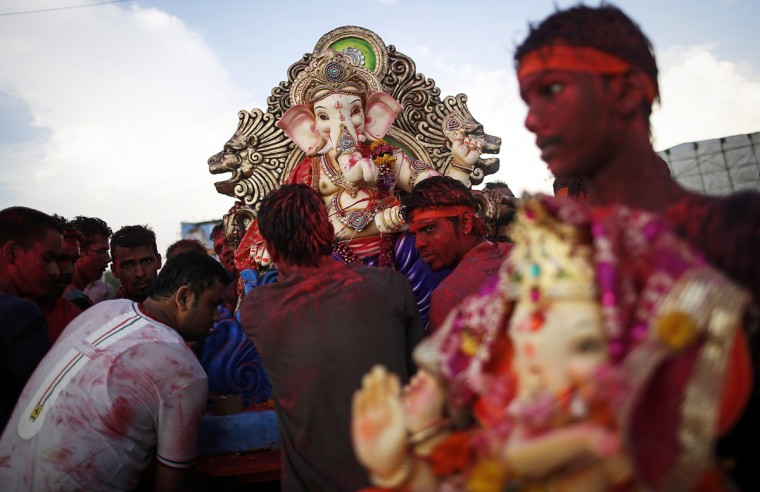 Devotees carry statues of the Hindu god Ganesh, the deity of prosperity, to be immersed into the Arabian Sea on the fifth day of the ten-day-long Ganesh Chaturthi festival in Mumbai September 2, 2014. Ganesh idols are taken through the streets in a procession accompanied by dancing and singing, and later immersed in a river or the sea, symbolising a ritual seeing-off of his journey towards his abode, taking away with him the misfortunes of all mankind. (REUTERS/Danish Siddiqui) 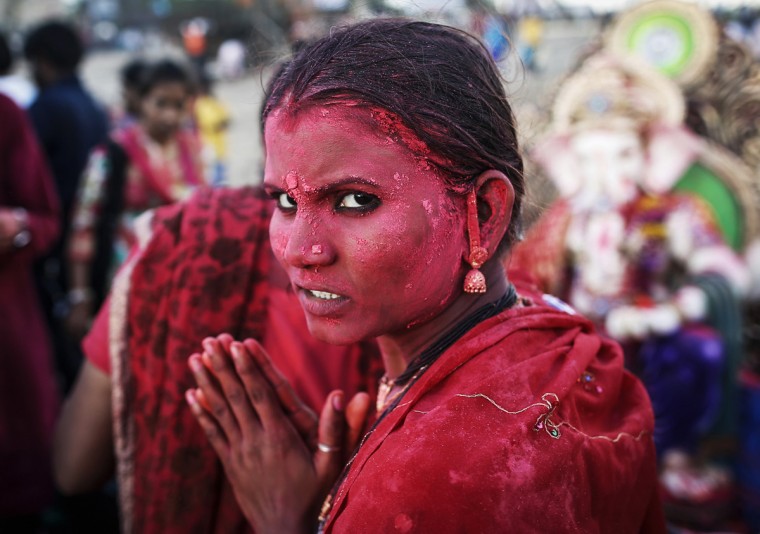 A devotee daubed in coloured powder prays as she takes part in the immersion of the idols of the Hindu god Ganesh, the deity of prosperity on the fifth day of the ten-day-long Ganesh Chaturthi festival in Mumbai September 2, 2014. Ganesh idols are taken through the streets in a procession accompanied by dancing and singing, and later immersed in a river or the sea, symbolising a ritual seeing-off of his journey towards his abode, taking away with him the misfortunes of all mankind. (REUTERS/Danish Siddiqui) 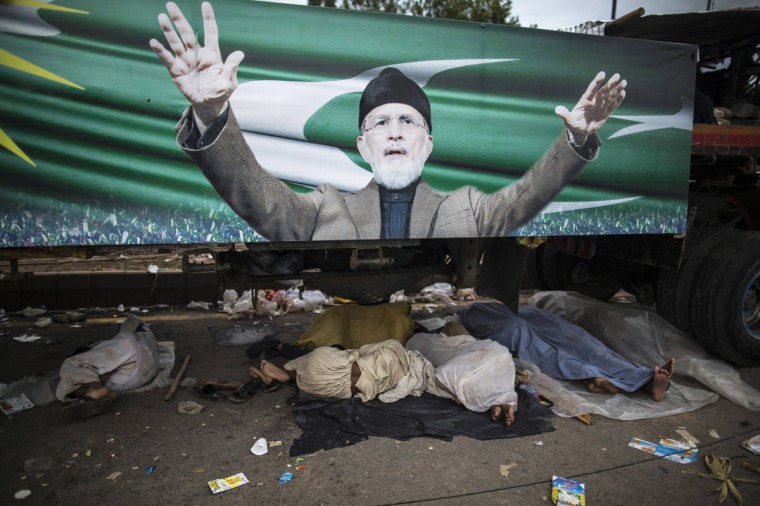 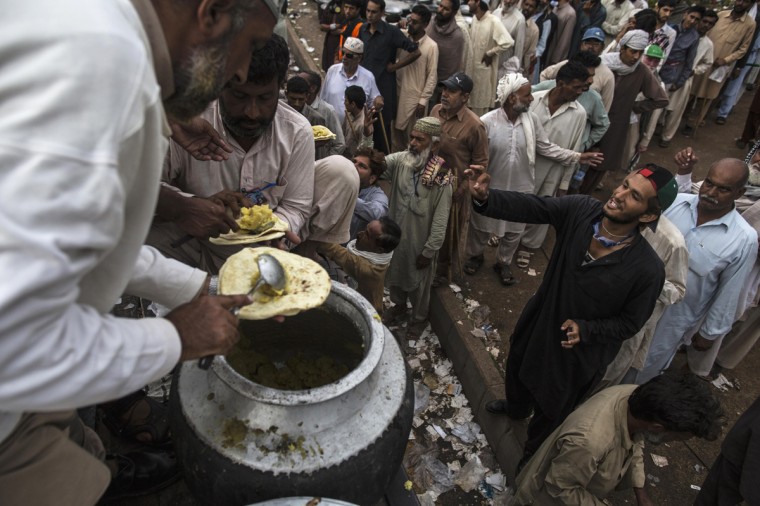 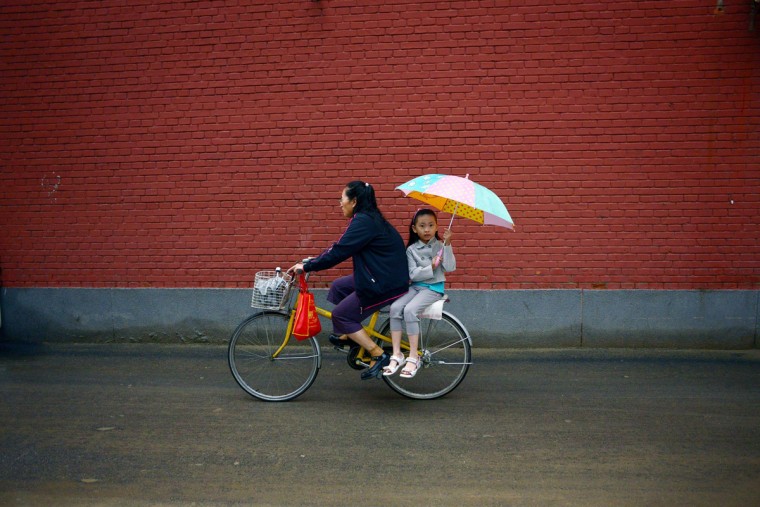 A girl holds an umbrella on the back of a bicycle along a road after school in Beijing on September 2, 2014. China tightens school security after a man stabbed three children and a teacher on September 1, state media said. (AFP PHOTO/Getty Images/Wang Zhao) 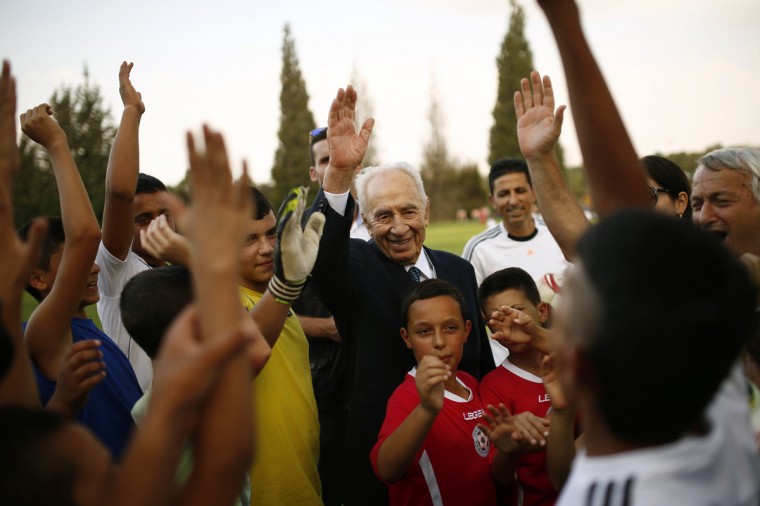 Former Israeli president Shimon Peres (C) is seen with Israeli and Palestinian children during an event opening a year of training of an Israeli-Palestinian soccer program launched by the Peres Center for Peace, in Kibbutz Dorot, outside the Gaza Strip, September 1, 2014. An open-ended ceasefire in the Gaza war has held since August 27. Some 80 children from communities near the Gaza border and from the West Bank Palestinian village of Yatta took part in the training session, the first since the ceasefire started. (REUTERS/Amir Cohen) 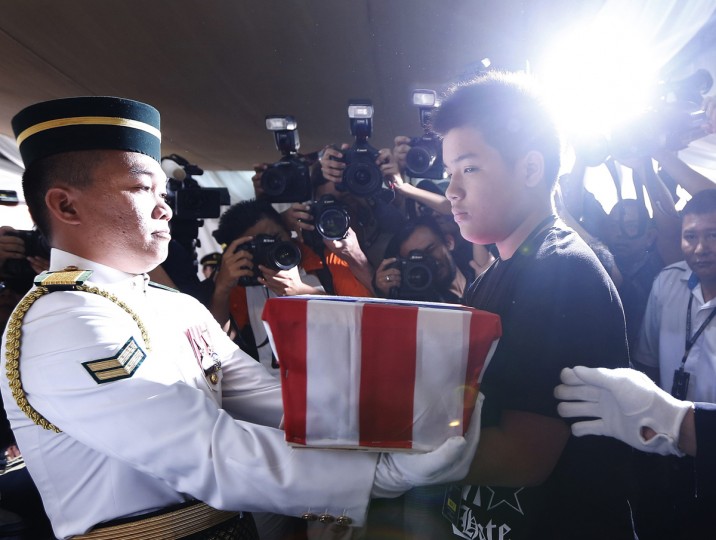 Melvic Choo, 13, takes the ashes of his father MH17 co-pilot Eugene Choo at his wake in Seremban September 2, 2014. Malaysia Airlines (MAS) Flight MH17 crashed after being shot down over war-torn Ukraine on July 17, killing all 298 people on board. (REUTERS/Olivia Harris) 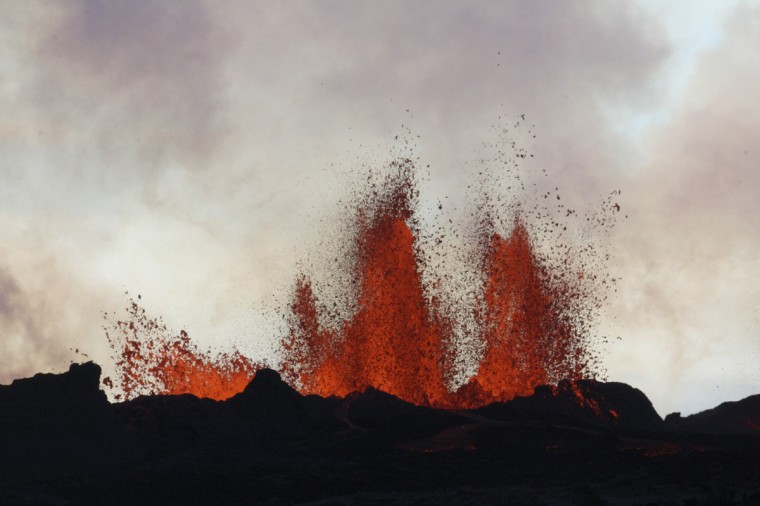 Lava fountains are pictured at the site of a fissure eruption near Iceland’s Bardarbunga volcano September 2, 2014. A fissure eruption near Iceland’s Bardarbunga volcano was still spouting lava on Monday but no ash, a day after an eruption that briefly caused the country to raise its ash alert level for aviation to its highest level. Iceland’s largest volcanic system – 190 km long and up to 25 km wide (118 miles by 15.5 miles) – has been hit by thousands of earthquakes over the last two weeks, putting scientists have been on high alert. (REUTERS/Armann Hoskuldsson) 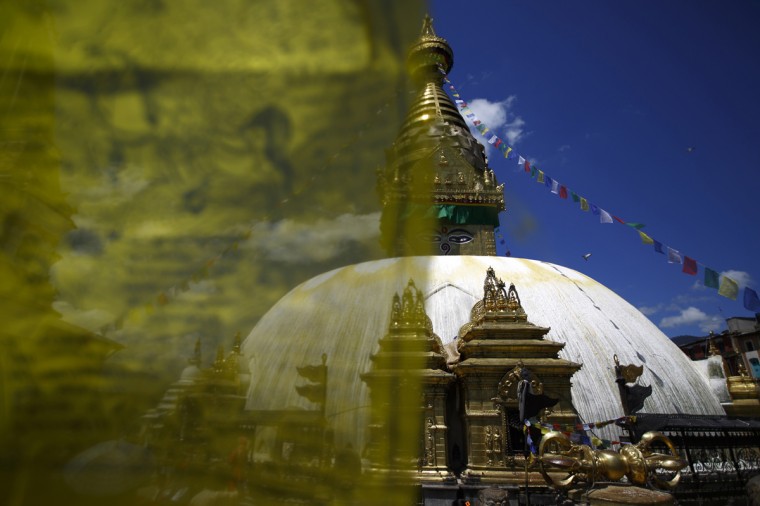 A general view of Swayambhunath Stupa is pictured behind a prayer flag in Kathmandu September 2, 2014. The Swayambhunath Stupa, which is a collection of shrines and temples located on a hilltop, is considered to be one of the holiest places for Buddhists. (REUTERS/Navesh Chitrakar) 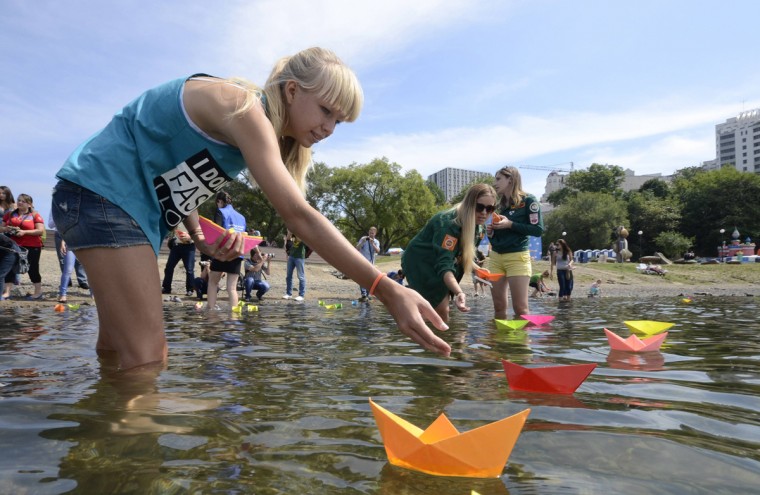 Activists launch paper boats during celebrations for the 69th anniversary of the end of World War Two in the far eastern city of Vladivostok, September 2, 2014. The holiday, marking the victory over Japan in World War II, is a Russian national memorial day, established by then President Dmitry Medvedev and approved by the Russian State Duma and the Federation Council on July 23, 2010. (REUTERS/Yuri Maltsev) 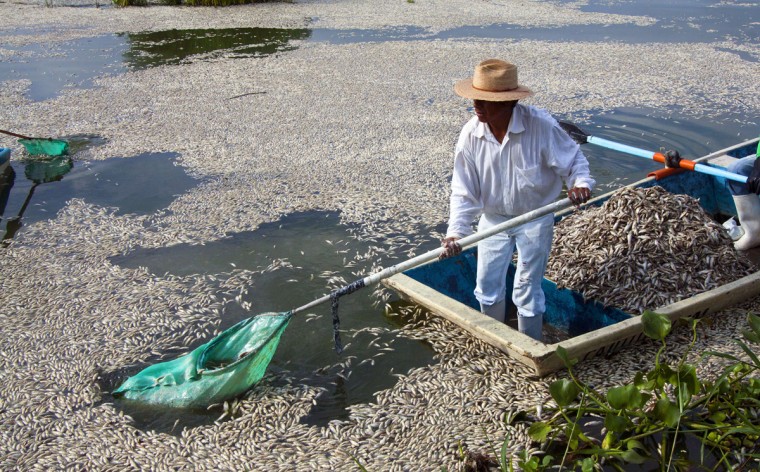 Fishermen collect dead “popocha” fish at the lagoon of Cajititlan in Tlajomulco de Zuniga, Jalisco State, Mexico, on September 1, 2014. At least 48 tonnes of fish have turned up dead in a lagoon in western Mexico and authorities are investigating whether a wastewater treatment plant is to blame. Officials in the state of Jalisco said late Sunday it was the fourth case of mass deaths at the Cajititlan lagoon this year in the town of Tlajomulco, south of Guadalajara. (AFP PHOTO/Getty Images/Hector Guerrero) 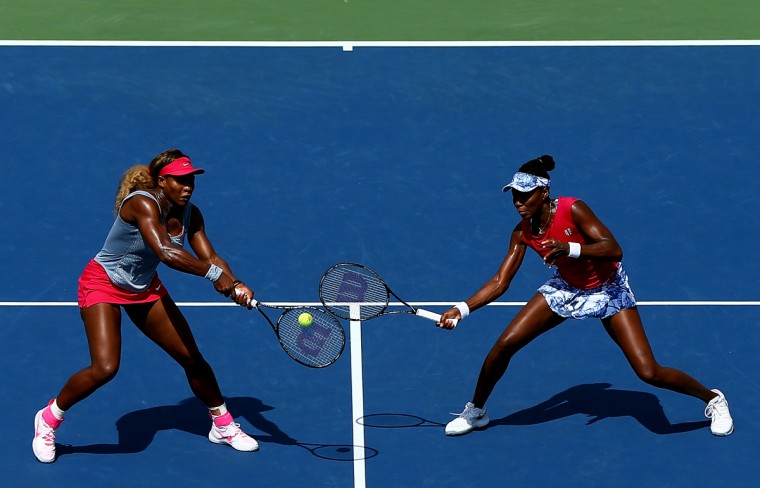 Venus Williams (R) and Serena Williams (L) of the United States return a shot against Ekaterina Makarova and Elena Vesnina of Russia during their women’s doubles quarterfinal match on Day Nine of the 2014 US Open at the USTA Billie Jean King National Tennis Center on September 2, 2014 in the Flushing neighborhood of the Queens borough of New York City. (Getty Images/Elsa) 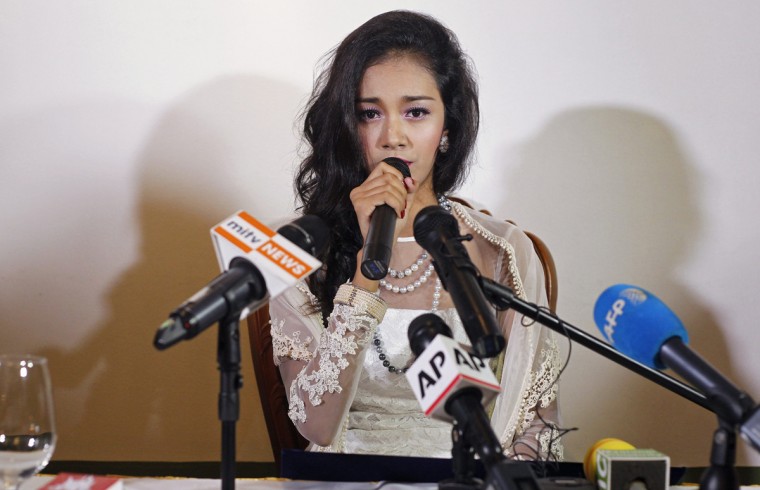 Myanmar’s former beauty queen May Myat Noe gives a news conference at a restaurant in Yangon September 2, 2014. May Myat Noe, who was crowned 2014 Miss Asia Pacific in May, disappeared with the $100,000 jewelled crown after being stripped of the title for being rude and dishonest, organisers said. May Myat Noe denied any wrongdoing and said she would not return the crown until she received an apology from the organisers, media reported. (REUTRS/Soe Zeya Tun) 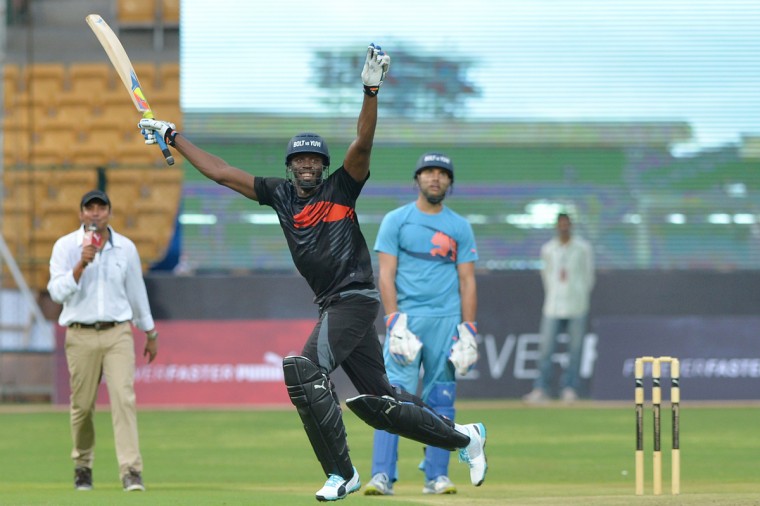 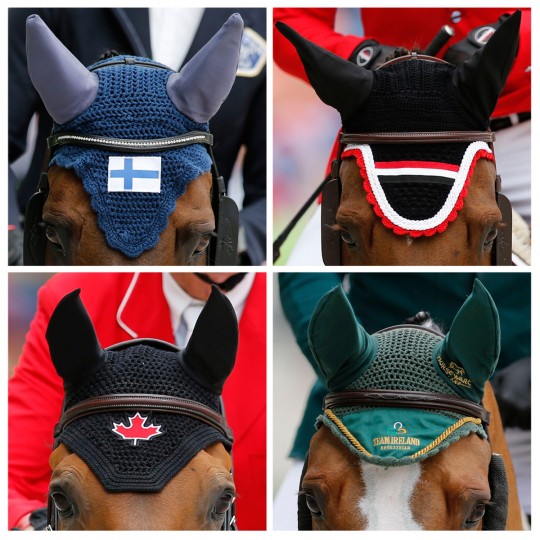 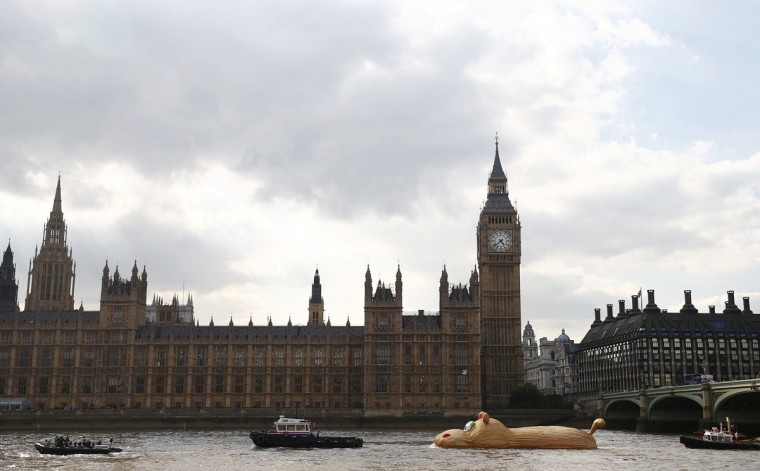 A sculpture of a giant hippopotamus, “HippopoThames”, built by artist Florentjin Hofman is towed up the Thames past the Houses of Parliament in central London, September 2, 2014. (REUTERS/Andrew Winning) 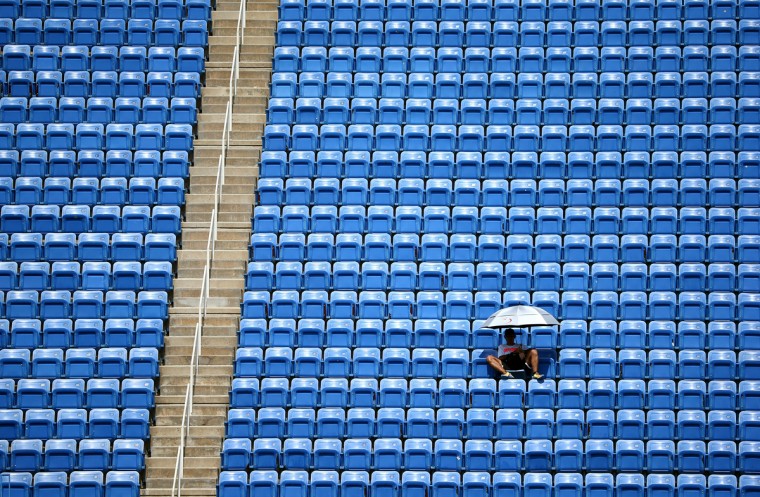 A fan attends Day Nine of the 2014 US Open at the USTA Billie Jean King National Tennis Center on September 2, 2014 in the Flushing neighborhood of the Queens borough of New York City. (Getty Images/Street Lecka) 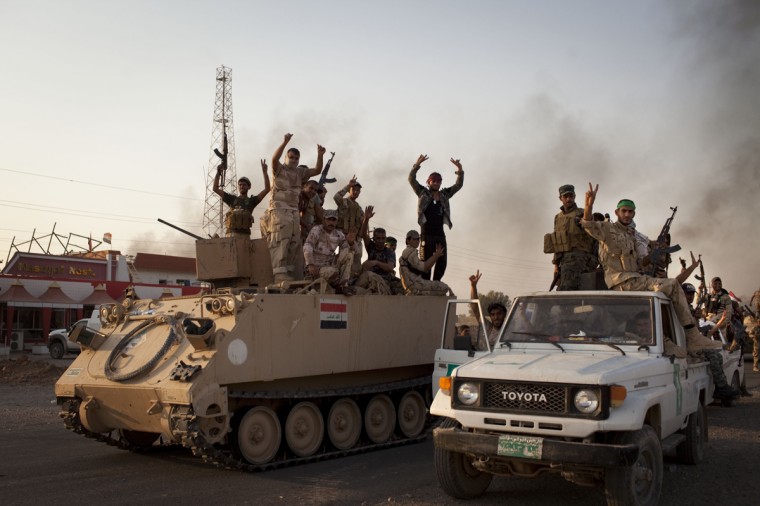 Iraqi soldiers wave to a humanitarian aid convoy en route to Amerli on September 1, 2014 after Iraqi forces broke through to the jihadist-besieged Shiite town the previous day, where thousands of people have been trapped for more than two months with dwindling food and water supplies. The mainly Shiite Turkmen residents of the town in Salaheddin province were running desperately short of food and water, and were in danger both because of their Shiite faith, which jihadists consider heresy, and their resistance to the militants, which has drawn harsh retribution elsewhere. (AFP PHOTO/Jim Lopez) 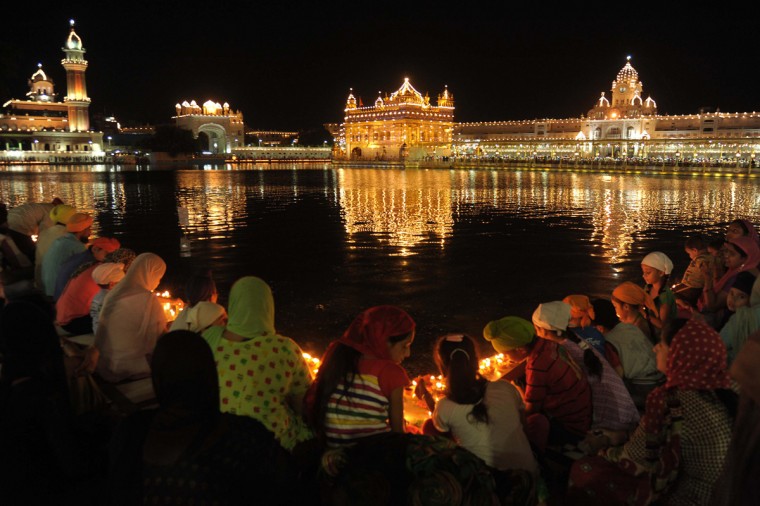 Indian Sikh devotees light candles at the illuminated Sikh shrine, The Golden Temple in Amritsar on September 1, 2014 on the occasion of the 410th anniversary of the installation of the Guru Granth Sahib, the holy book of the Sikh religion. (AFP PHOTO/Getty Images/Narinder Nanu)

« Past Labor Day celebrations around Baltimore » A. Aubrey Bodine: Along Maryland Fences