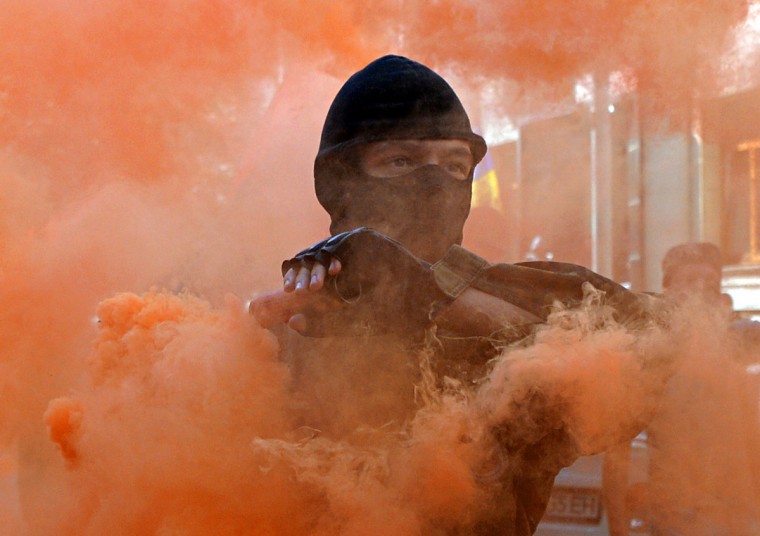 A protestor holds a smoke bomb during a demonstration outside the President Palace in Kiev. Activists from far-right nationalist movements protested against the adoption on September 16, of laws that give extra self-rule powers to some rebel-held territories in the Donetsk and Lugansk regions on eastern Ukraine. (Genya Savilov/Getty Images) 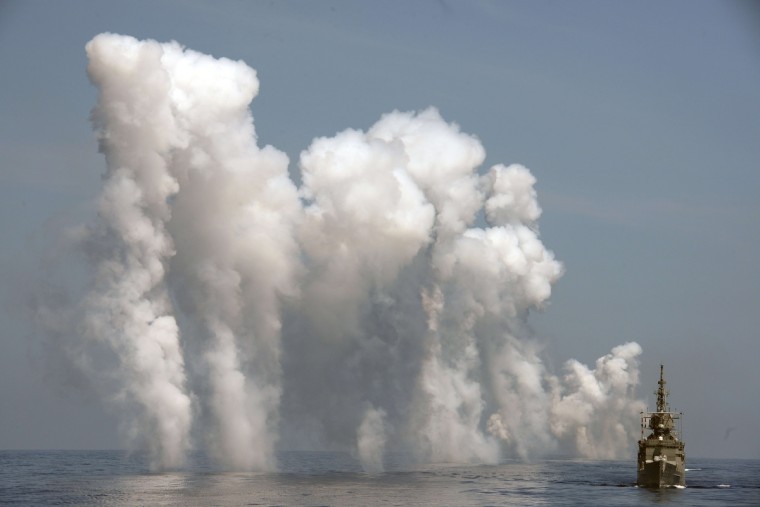 A US-made Perry-class frigate takes part in the Han Kuang drill at sea near eastern Hualien. Taiwanese navy fired rockets and guns on September 17 in a scenario simulating a Chinese invasion in the island’s biggest live-fire naval drill in 25 years. (Sam Yeh/Getty Images) 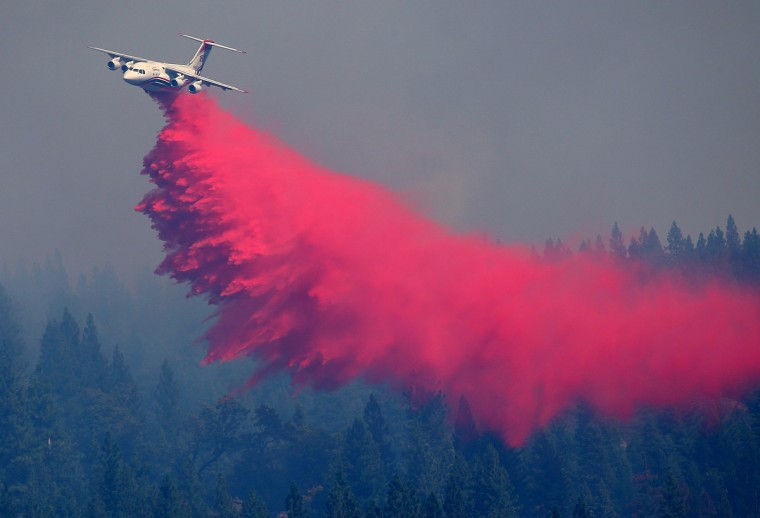 An air tanker drops Foscheck fire retardant on a hillside ahead of the King Fire in Pollock Pines, California. The King fire is threatening over 1,600 homes in the forested area about an hour east of Sacramento and has consumed over 18,544 acres. The out of control fire is 5 percent contained. (Justin Sullivan/Getty Images) 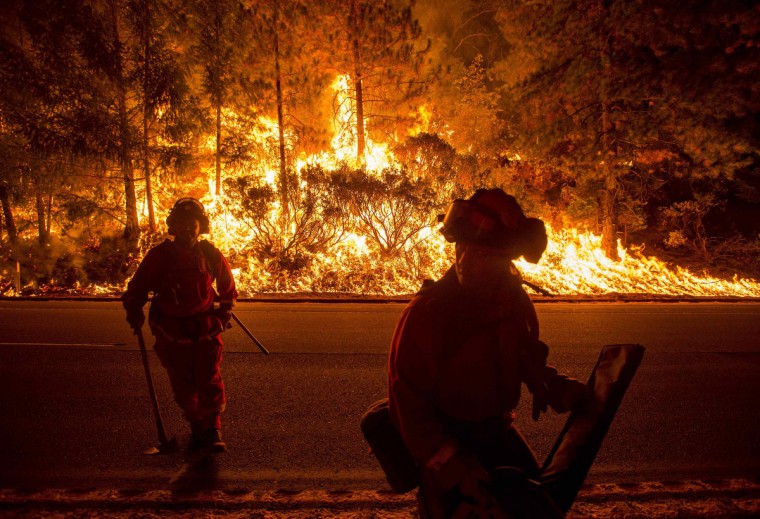 Firefighters battling the King Fire watch as a backfire burns along Highway 50 in Fresh Pond, California. The fire led officials to call on about 400 people to evacuate from areas threatened by the blaze, Cal Fire spokeswoman Alyssa Smith said. It has charred more than 11,500 acres (4,654 hectares) and was 5 percent contained on Tuesday. (Noah Berger/Reuters) 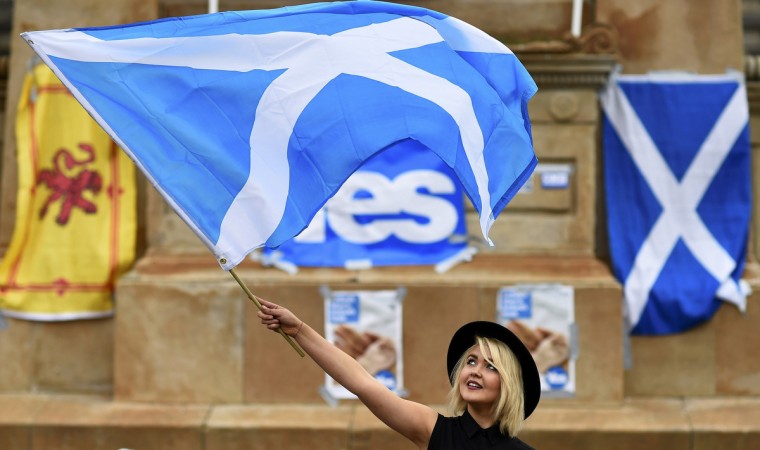 A woman waves a Scottish Saltire at a ‘Yes’ campaign rally in Glasgow, Scotland. The referendum on Scottish independence will take place, when Scotland will vote whether or not to end the 307-year-old union with the rest of the United Kingdom. (Dylan Martinez/Reuters) 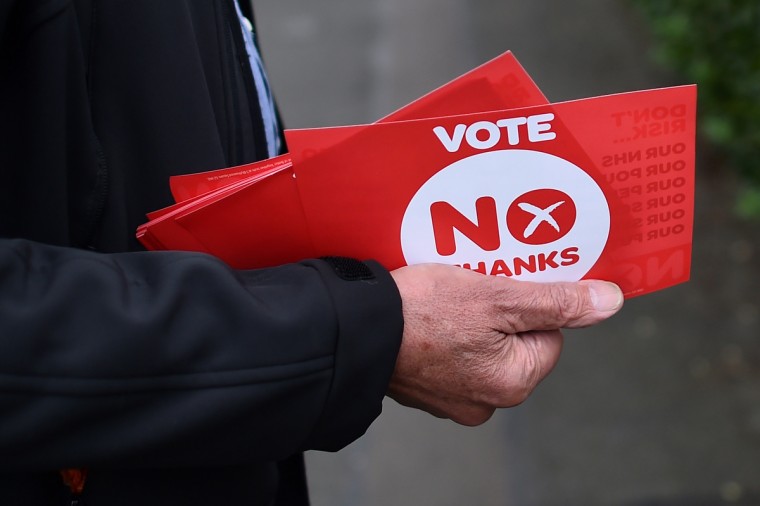 An anti-independence “Better Together” campaigner carries “No” leaflets in Edinburgh, Scotland on the eve of Scotland’s independence referendum. Campaigners for and against Scottish independence scrambled for votes on Wednesday on the eve of a knife-edge referendum that will either see Scotland break away from the United Kingdom or gain sweeping new powers with greater autonomy. (Ben Stansall/Getty Images) 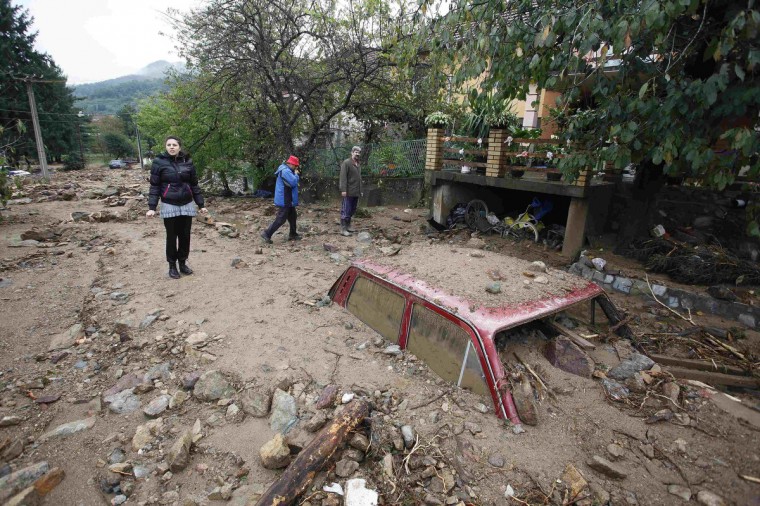 People pass by a vehicle almost completely submerged on a street covered with mud due to heavy floods in Tekija village. One person died in Serbia and authorities scrambled to evacuate hundreds of people from villages threatened by rising rivers, officials said on Tuesday, in scenes recalling the devastating May flooding that killed dozens. (Djordje Kojadinovic/Reuters) 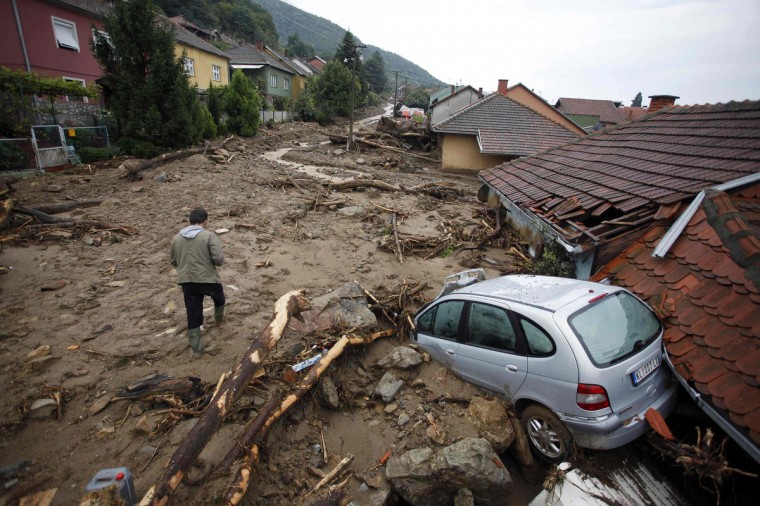 A man passes by a damaged vehicle on a street covered with mud due to heavy floods in Tekija village. One person died in Serbia and authorities scrambled to evacuate hundreds of people from villages threatened by rising rivers, officials said on Tuesday, in scenes recalling the devastating May flooding that killed dozens. (Djordje Kojadinovic/Reuters) 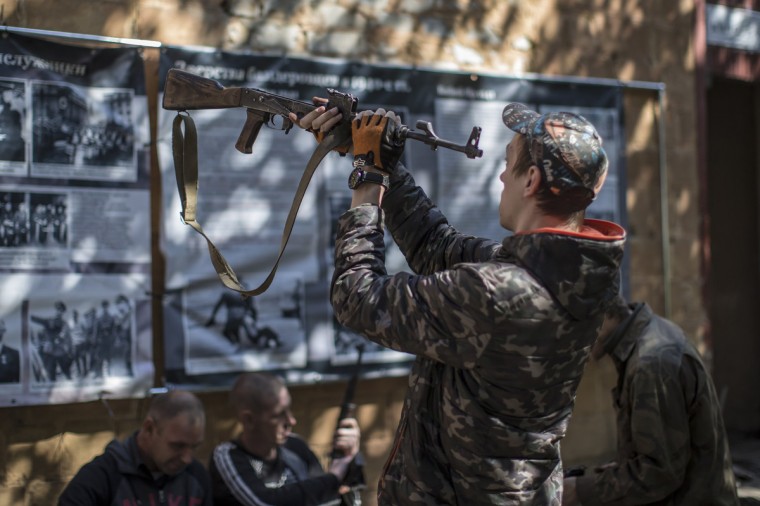 A pro-Russian rebel checks his rifle inside the Vostok (East) battalion base in Donetsk, eastern Ukraine. (Marko Djurica/Reuters) 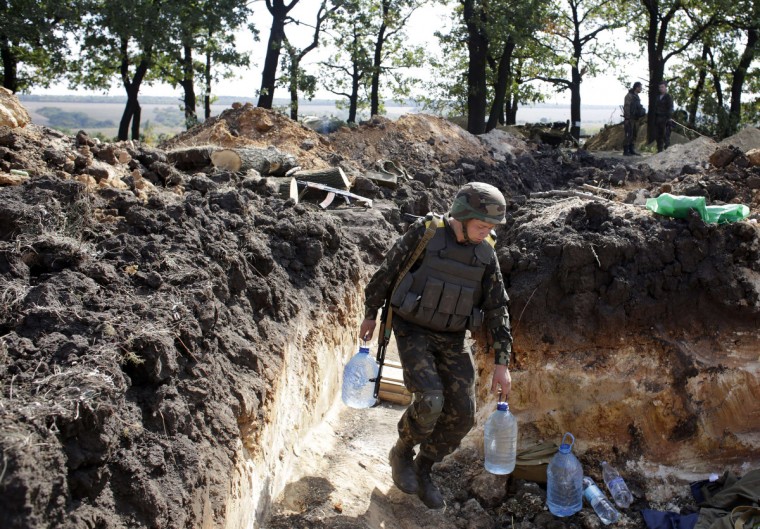 A Ukrainian serviceman carries bottles of water to a position near the eastern town of Pervomaysk in the district of Lugansk. Ukrainian leader Petro Poroshenko will cast Russia as a global menace on September 18 when he meets US President Barack Obama in the hope of winning a “special status” guaranteeing his troubled nation’s security. (Anatoli Stepanov/Getty Images) 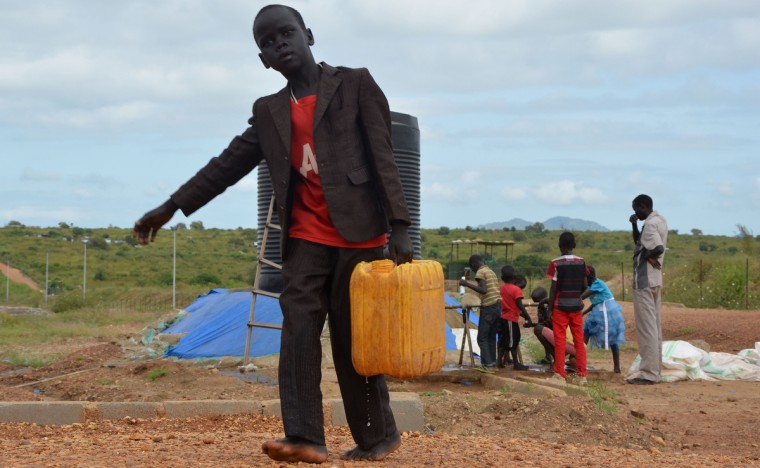 A South Sudanese boy carries a jerrican of water inside the Protection of Civilians (PoC) site located at the United Nations Missions in Sudan (UNMIS) in Juba. The government in war-torn South Sudan said today it will not be expelling any foreign workers, reversing a policy announcement made the previous day that caused a storm of protests from aid agencies and neighbouring countries. (Samir Bol/Getty Images) 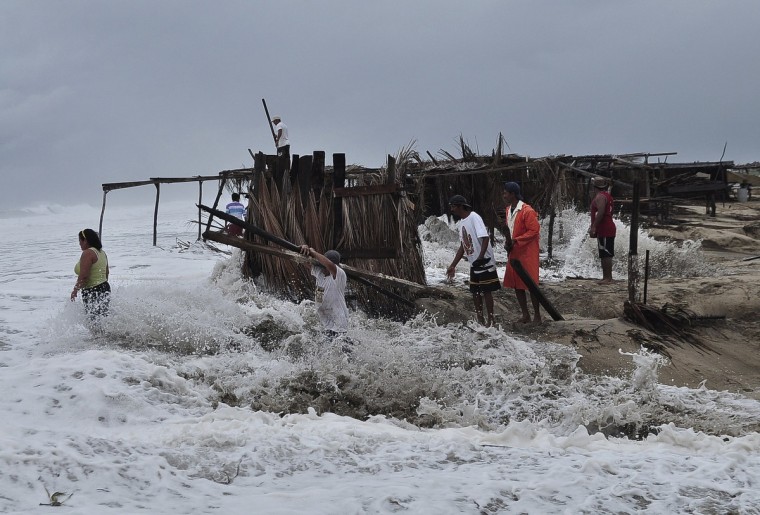 Residents recover pieces of wood after high waves dragged their beach stalls into the sea in Coyuca de Benitez, on the outskirts of Acapulco. Tropical Storm Polo is forecast to become a hurricane off Mexico’s Pacific Coast on Thursday, the U.S. National Hurricane Center (NHC) said, just days after a severe storm battered the Baja California peninsula. As of Tuesday afternoon, Polo was about 260 miles (418 km) south of Mexico’s beach resort of Acapulco and moving in a northwesterly direction at 12 miles per hour (19 km per hour), the NHC said. It added that the storm had maximum sustained winds of 45 mph, with some strengthening expected as it moves almost parallel along the southwestern coast of Mexico through Thursday. (Claudio Vargas/Reuters) 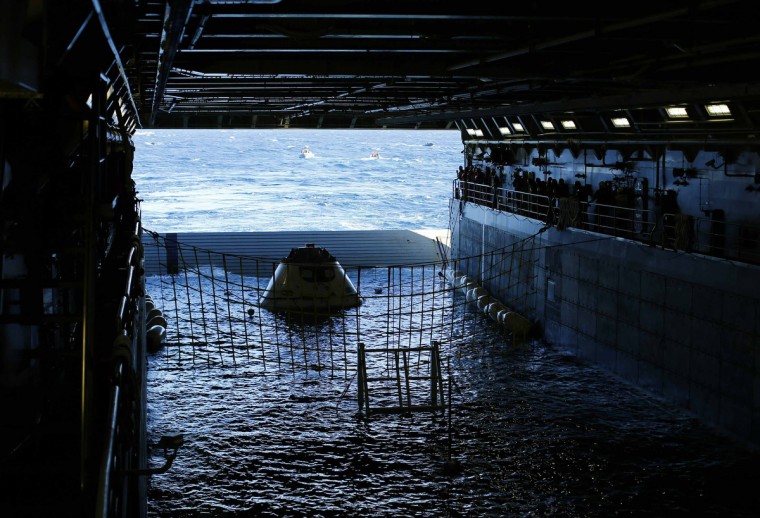 A test version of NASA’s Orion capsule floats in the rear of the USS Anchorage during a recovery drill off the coast of California. Orion is NASA’s next exploration spacecraft, designed to carry astronauts to destinations in deep space, including an asteroid and Mars. (Mike Blake/Reuters) 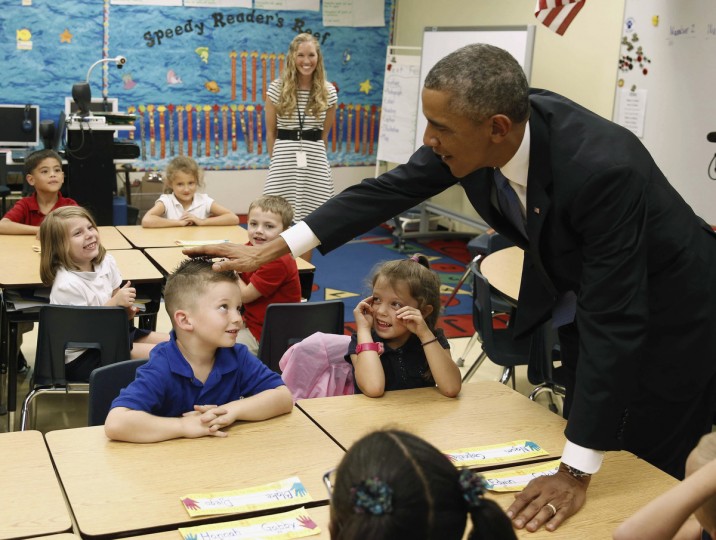 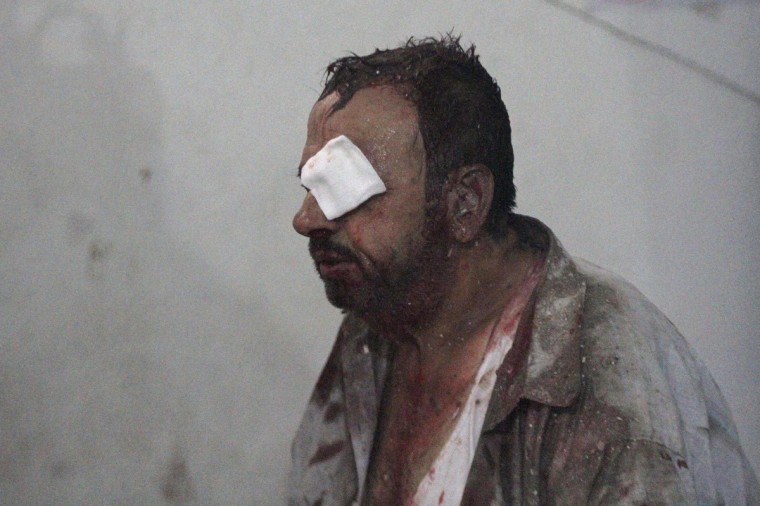 An injured man rests inside a field hospital after what activists said were two air strikes by forces of Syria’s President Bashar al-Assad on a market in central Douma, eastern al-Ghouta, near Damascus. (Badra Mamet/Reuters) 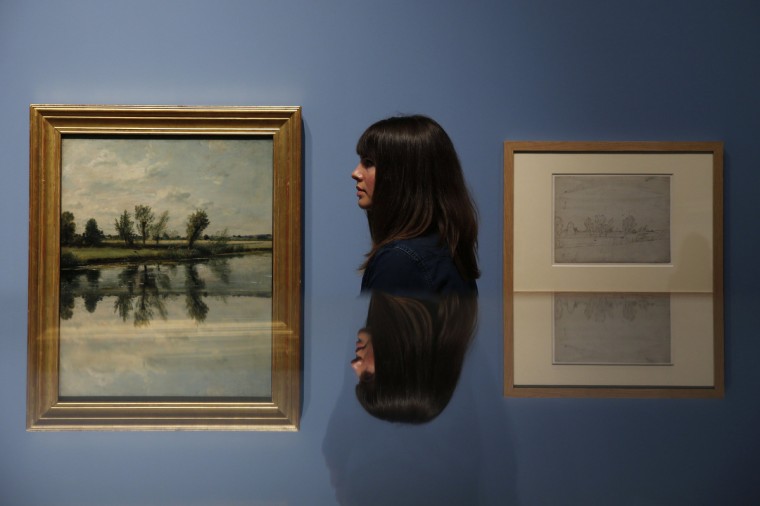 Museum assistant Emily Williamson poses next to “Watermeadows at Salisbury” (L) by John Constable, during the press view of the “Constable The Making of a Master” exhibition at the V&A museum in London. (Stefan Wermuth/Reuters) 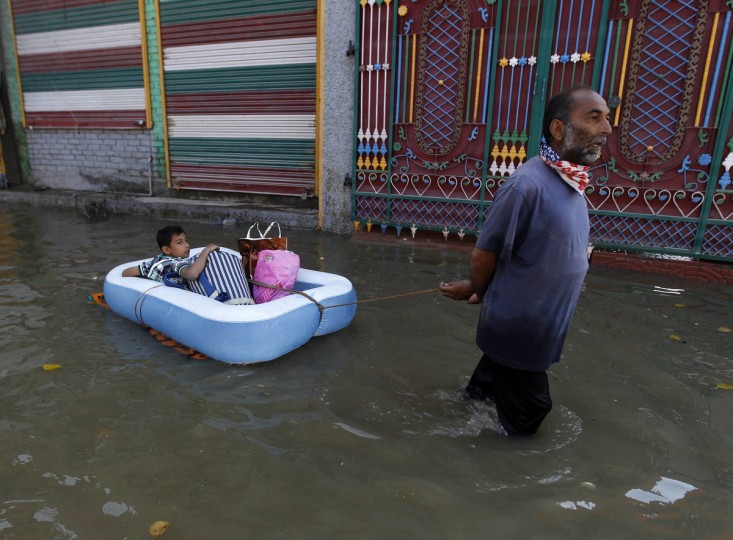 A Kashmir man pulls an inflatable raft carrying a boy through a flooded neighborhood in Srinagar. Both the Indian and Pakistani sides of the disputed Himalayan region have seen extensive flooding this month with Srinagar particularly hard hit. Hundreds of people have been killed and tens of thousands are homeless. (Danish Ismail/Reuters) 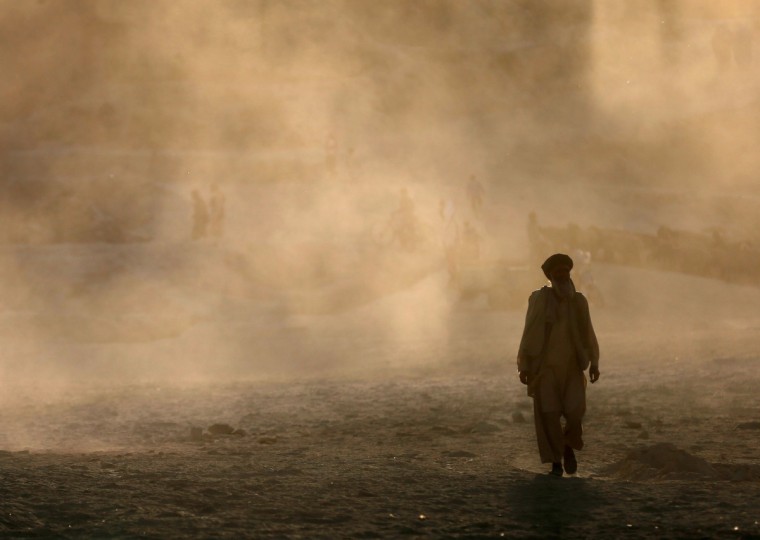 An Afghan man walks amidst a dust cloud as the sun sets in Kabul. (Mohammad Ismail/Reuters) 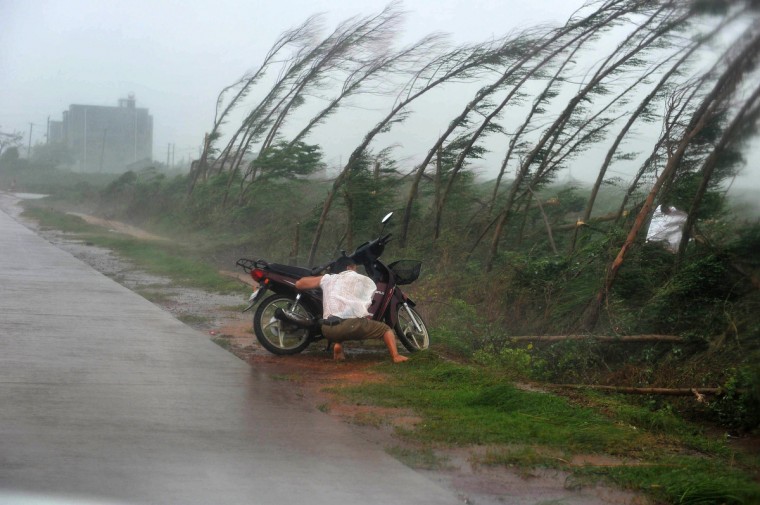 A man takes shelter amid strong rainfall alongside his motorbike in Zhanjiang, south China’s Guangdong province. A powerful typhoon slammed into China’s Hainan island after sweeping past Hong Kong where it disrupted flights and forced the closure of the stock market and container ports. (Getty Images) 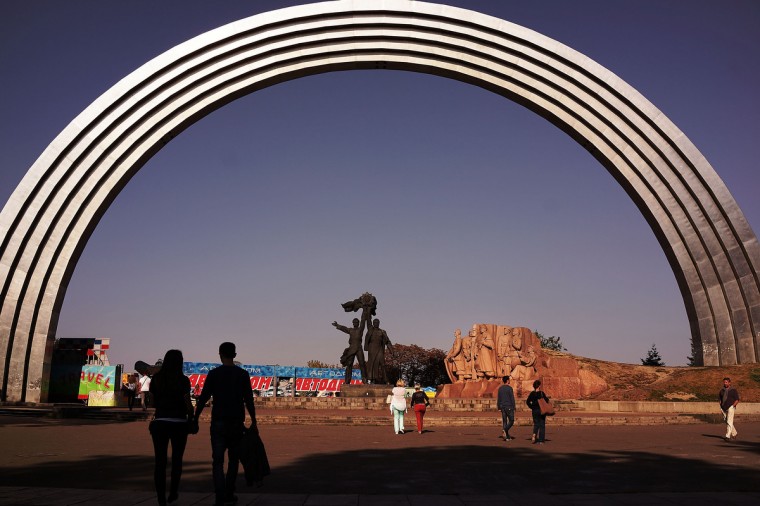 People walk under the Friendship of Nations Arch in Kiev, Ukraine. Prime Minister Arseniy Yatseniuk announced on September 17, that Ukraine will screen about one million civil servants to help root out corrupt practices from the past. (Spencer Platt/Getty Images) 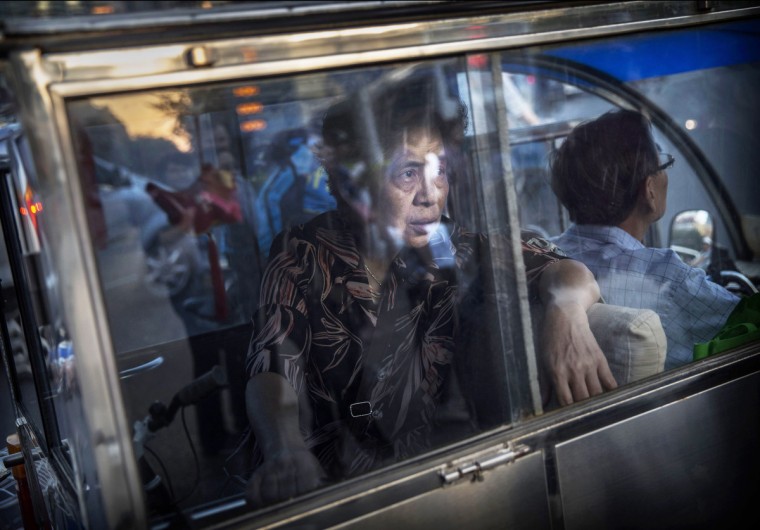 A Chinese woman waits in the back of a three-wheeled taxi while sitting in traffic during rush hour in Beijing, China. (Kevin Frayer/Getty Images) 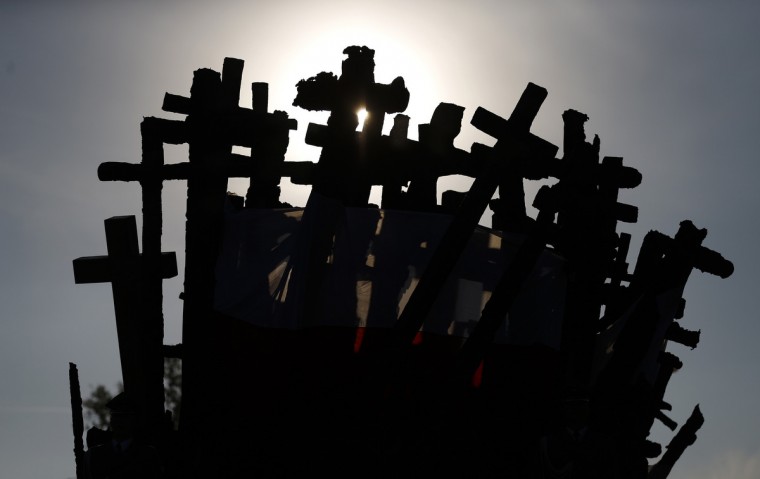 A silhouette of the Monument to the Fallen and Murdered in the East is seen during ceremonies commemorating the 75th anniversary of the Soviet Union’s invasion of the eastern part of Poland at the outbreak of World War II, in Warsaw. (Kacper Pempel/Reuters) 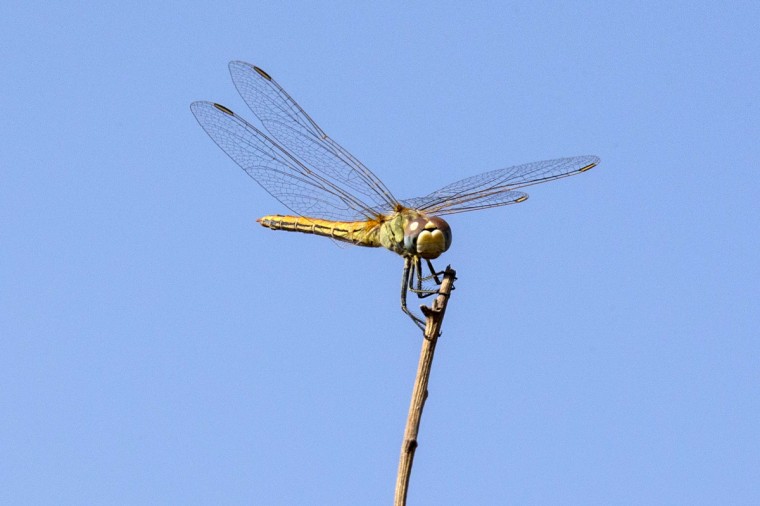 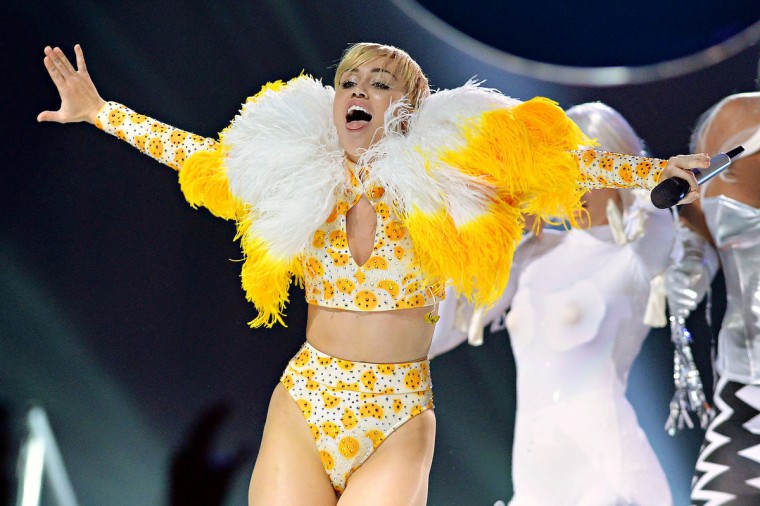 « From Sun Magazine: Graphic fashions that will put you at center stage » Slabs of the Berlin Wall become art