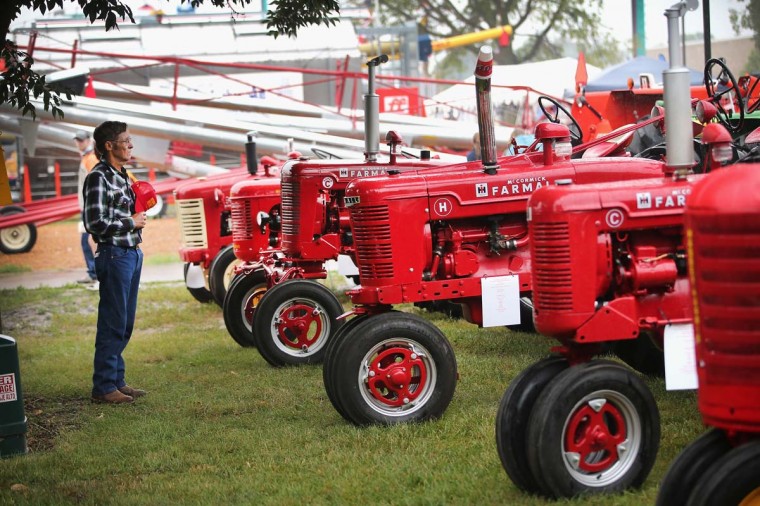 Roger Gibson pauses for the National Anthem while viewing the vintage tractor exhibit at the Iowa State Fair on August 7 in Des Moines, Iowa. The fair opened today and will run through August 17, 2014. (Photo by Scott Olson/Getty Images) 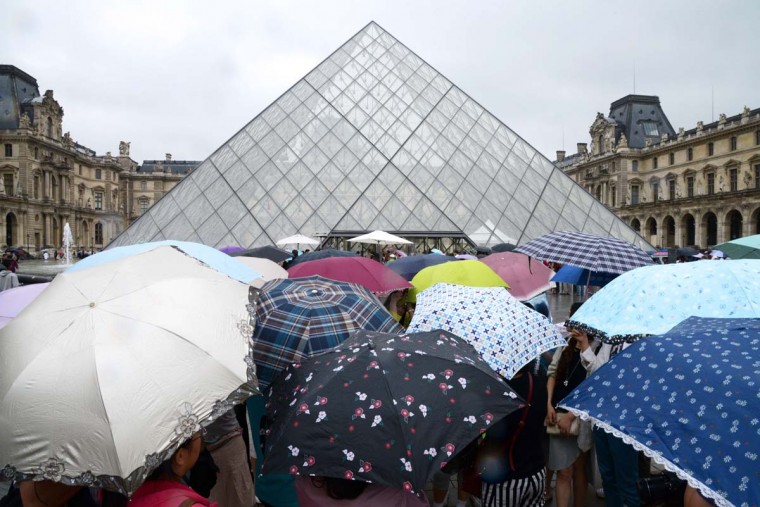 People queue under the rain to get in the Louvre Museum in Paris on August 8. || CREDIT: DOMINIQUE FAGET – AFP/GETTY IMAGES 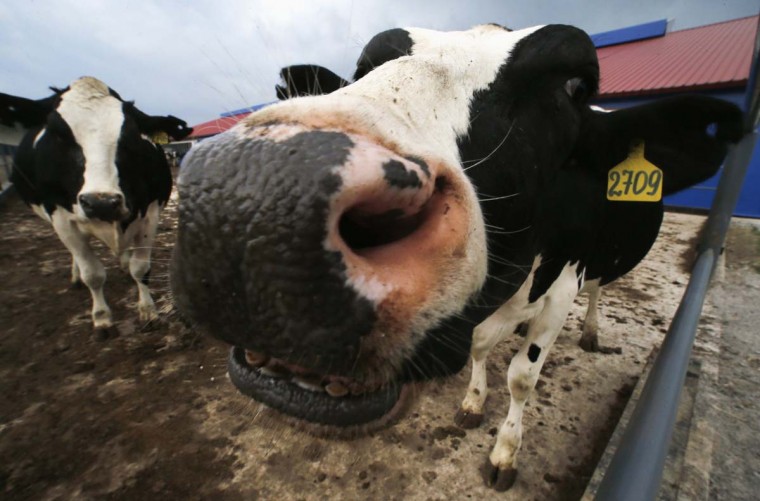 Cows are seen at a new dairy farm containing 800 animals on the day of its opening in the village of Petrovskoye in Leningrad region, some 90 km (56 miles) north of St. Petersburg, August 8. Moscow imposed a total ban on imports of many Western foods on August 7 in retaliation against sanctions over Ukraine, a stronger than expected measure that isolates Russian consumers from world trade to a degree unseen since Soviet days. || PHOTO CREDIT: ALEXANDER DEMIANCHUK – REUTERS 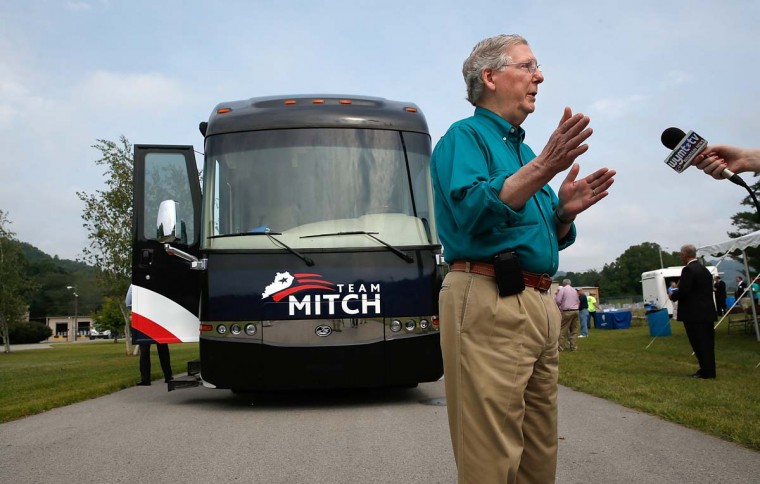 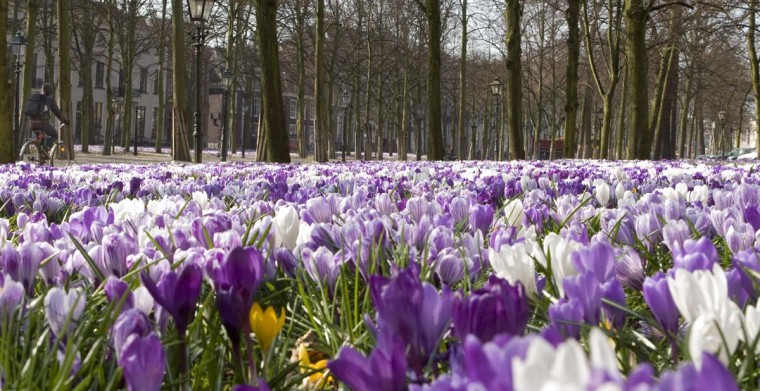 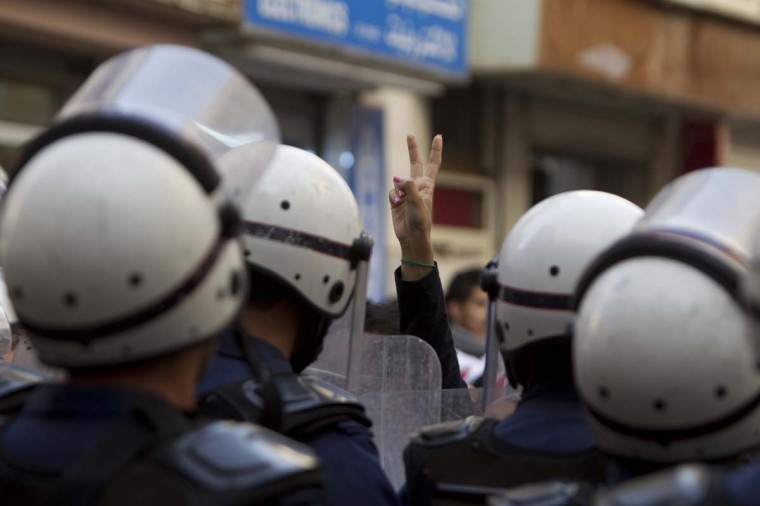 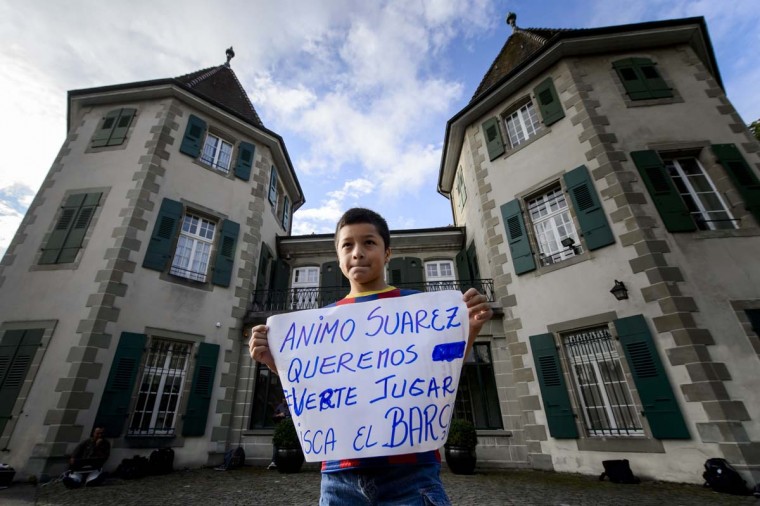 Ten years old Carlo poses with a placard reading “Come on ! Suarez, we want to see you playing at Barca” in front of the Court of Arbitration for Sport (CAS) on August 8 in Lausanne. Barcelona’s Uruguayan striker Luis Suarez who is currently serving a four-month suspension after his infamous World Cup bite of Italy’s Giorgio Chiellini arrived for his appeals before the Court of Arbitration for Sport (CAS) in Lausanne. Suarez was banned from all football-related activity for four months after biting Italy defender Giorgio Chiellini on the shoulder during a World Cup group game in the Brazilian city of Natal last month. || CREDIT: FABRICE COFFRINI – AFP/GETTY IMAGES 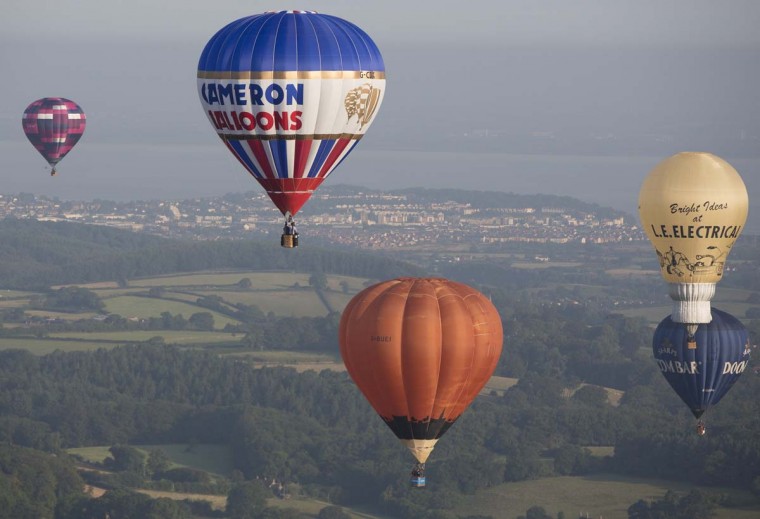 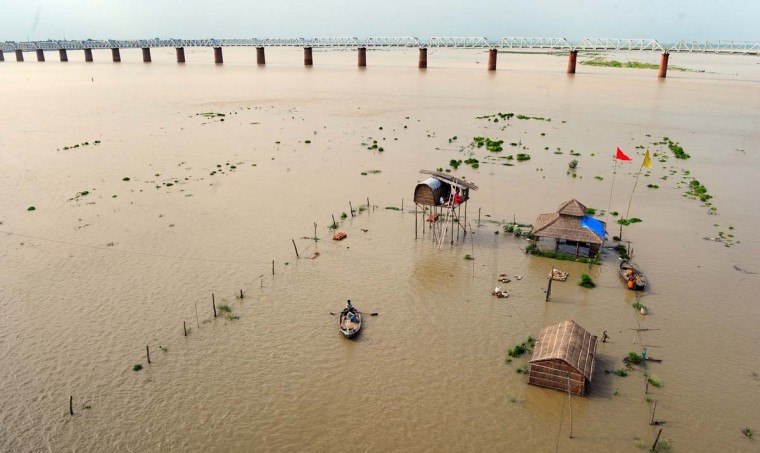 An Indian boatman rows passengers from submerged huts of ‘sadhus’ – holy men – on the flooded banks of the Ganga river after water levels rose, in Allahabad on August 8. Heavy rain in several areas of north India has caused rivers to reach the danger mark and flooding has occured in various places. || CREDIT: SANJAY KANOJIA – AFP/GETTY IMAGES 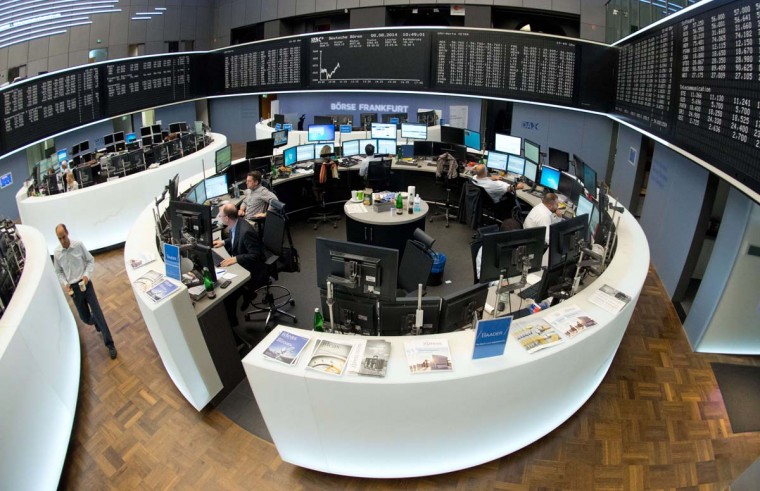 Brokers work at the stock exchange in Frankfurt am Main, western Germany on August 8. The Frankfurt Stock Exchange evolved down sharply Friday morning, falling below the symbolic threshold of 9,000 points due to geopolitical tensions. BORIS ROESSLER – AFP/Getty Images 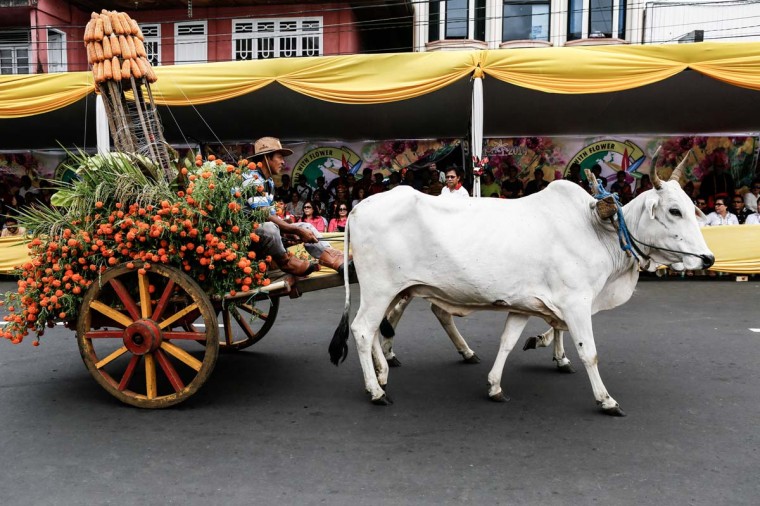 A float pulled by cows during Tomohon International Flower Festival on August 8 in Tomohon, North Sulawesi, Indonesia. The flower festival is a biannual event that has run since 2008. It was originally devised to boost tourism in the North Sulawesi region. (Photo by Putu Sayoga/Getty Images) 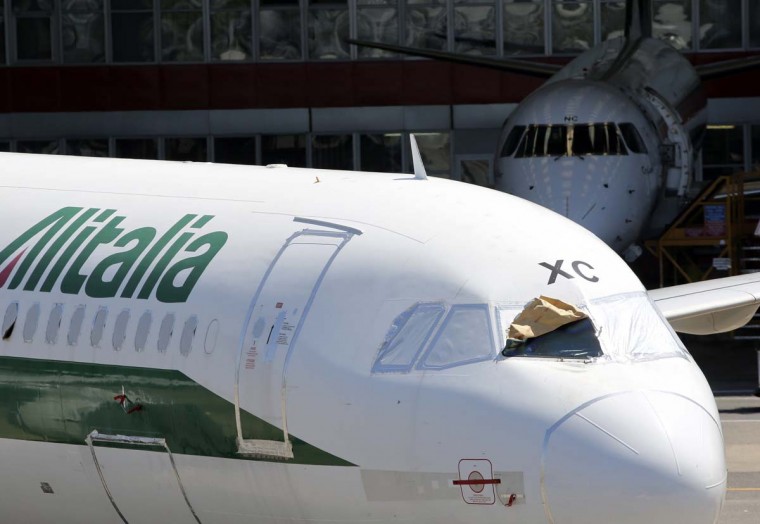 An Alitalia airplane is seen outside a hangar at Leonardo da Vinci airport in Fiumicino, August 8. Italy’s flagship carrier Alitalia said on Friday it had reached a deal with trade unions that had not originally signed up to a labour contract agreement that is a key part of a tie-up deal with Abu Dhabi-based Etihad. || PHOTO CREDIT: STEFANO RELLANDINI – REUTERS 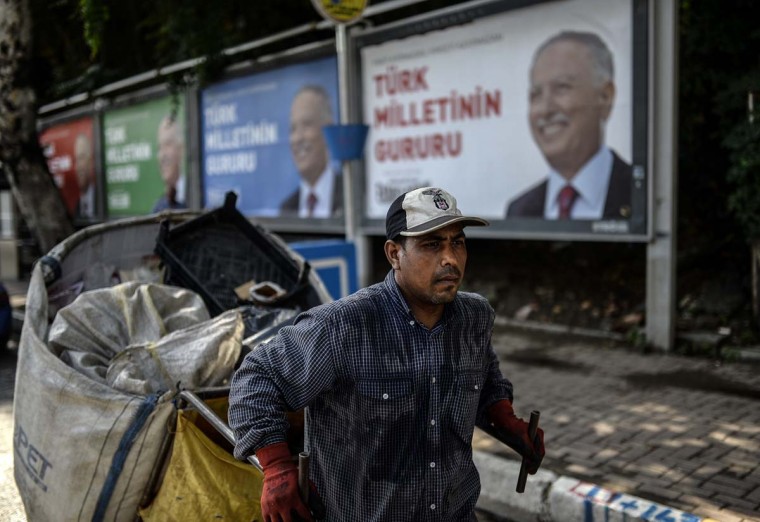 A man collecting rubbish walks past a campaign poster of Ekmeleddin Ihsanoglu, the leading opposition candidate for Turkish presidential elections, on August 8, in Istanbul. Turkish voters will directly elect their head of state for the first time in the country’s modern history in the August 10 election, with Prime Minister Recep Tayyip Erdogan the hot favourite to become president. Erdogan sparked an outcry on August 6 after using what critics said was a racist slur against Armenians in a television interview. || CREDIT: BULENT KILIC – AFP/GETTY IMAGES 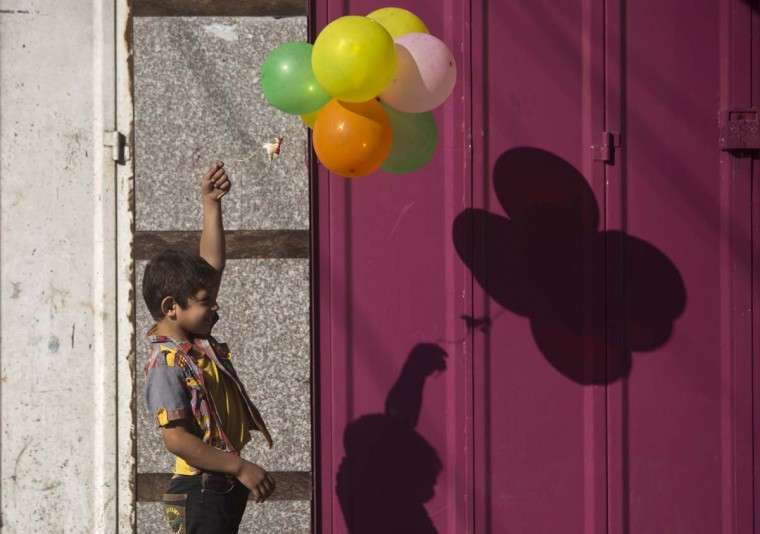 A Palestinian boy plays with ballons as families leave their homes in Gaza City’s Shejaiya neighbourhood in fear of Israeli attacks, after Palestinian factions in Gaza refused to extend the 72-hour ceasefire with Israel, on August 8. Both sides resumed fighting shortly after the cease-fire, though Israel had earlier claimed that its main goal — destruction of what it labeled “terror tunnels” — had been accomplished. The tunnels, while sometimes used for military purposes, were also regularly utilised by peaceful civilians to get around a seven-year blockade of basic supplies to Gaza. President Obama this week criticised that blockade, saying that there has to be “a recognition that Gaza cannot sustain itself permanently closed off from the world.”|| CREDIT: MAHMUD HAMS – AFP/GETTY IMAGES 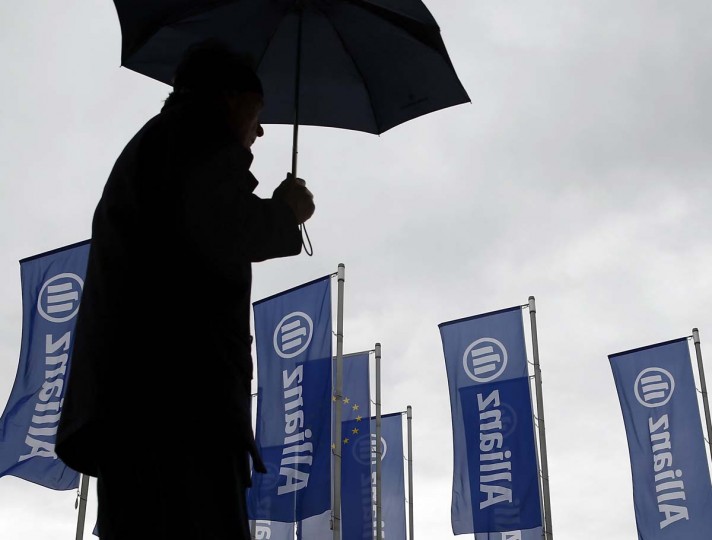 A shareholder of Europe’s biggest insurer Allianz SE arrives for the company’s annual meeting in Munich in this May file photo. Allianz posted net profit of 1.76 billion euros in the second quarter, up 10.5 percent and soundly beating expectations, as revenue surged. The company confirmed its outlook for its operating profit in 2014. || PHOTO CREDIT: MICHAEL DALDER/FILES – REUTERS 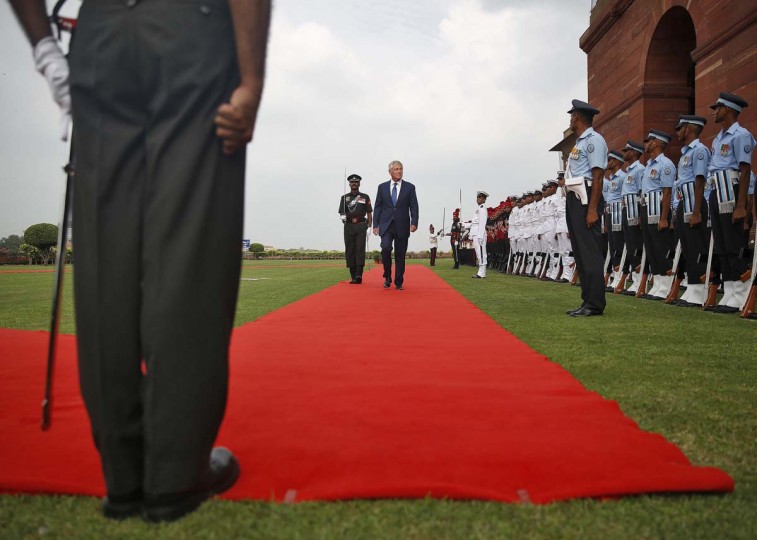 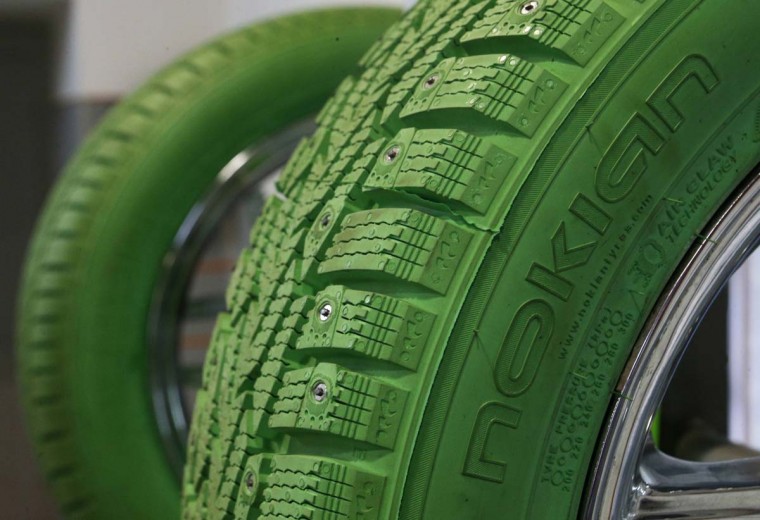 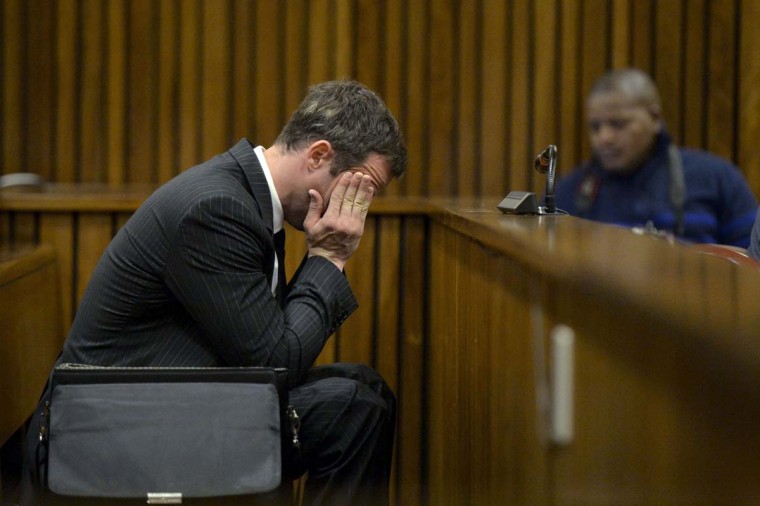 South African Olympic and Paralympic sprinter Oscar Pistorius sits in the dock during the closing defence arguments in the North Gauteng High Court in Pretoria August 8. Pistorius’ “primal instincts” kicked in when he shot dead his girlfriend Reeva Steenkamp because he was in a vulnerable and fearful state, his defence lawyer said at the athlete’s murder trial on Friday. Double amputee Pistorius, 27, once a national icon for reaching the pinnacle of sport, is accused of murdering Steenkamp, a law graduate and model, at his home in Pretoria on Valentine’s Day last year. || PHOTO CREDIT: HERMAN VERWEY/POOL – REUTERS 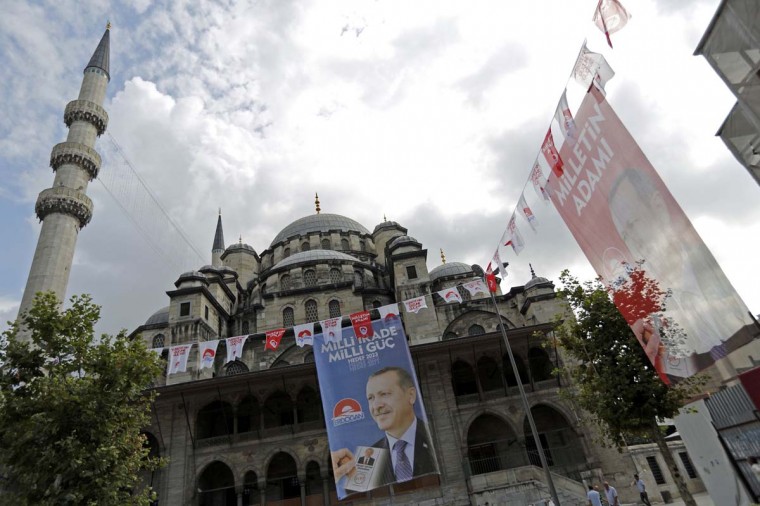 An election poster of Turkey’s Prime Minister and presidential candidate Tayyip Erdogan reading “The power of national will” (C) is seen in Istanbul August 8. Erdogan is set to secure his place in history as Turkey’s first popularly-elected president on Sunday, but his tightening grip on power has polarised the nation, worried Western allies and raised fears of creeping authoritarianism. || PHOTO CREDIT: MURAD SEZER – REUTERS 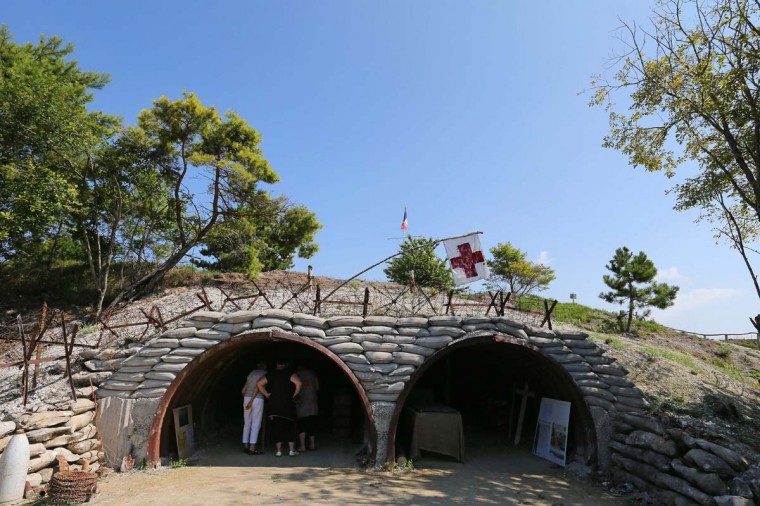 Visitors stand on August 5, 2014 at an advanced dressing station in trenches from WWI which have been restored since 2008 by eight keen volunteers, to give visitors a feeling of the horror of the trenches, on the crests of Massiges, northeastern France. FRANCOIS NASCIMBENI – AFP/Getty Images 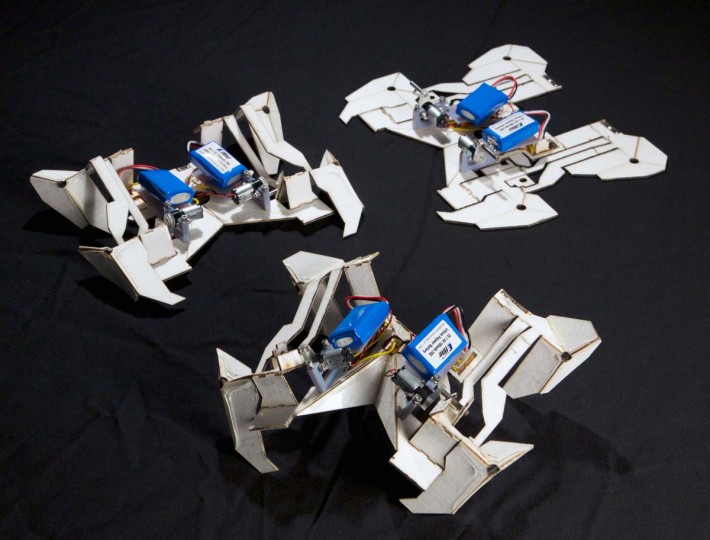 “Origami” robots fold themselves into 3-D objects that move and walk and that are much cheaper to transport than traditional robots. Photo credit: Harvardís Wyss Institute. 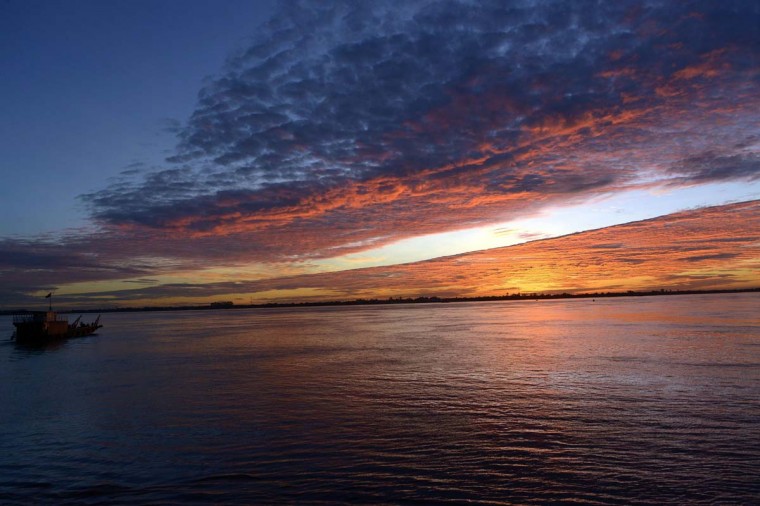