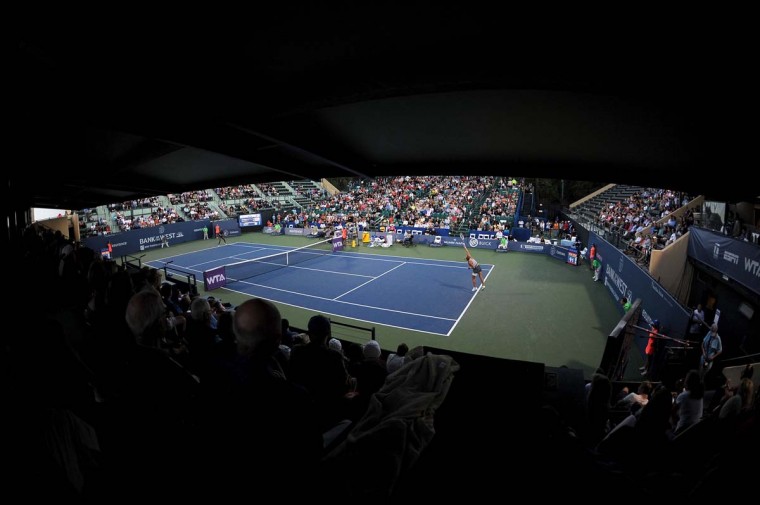 A general view as Venus Williams of the Unites States of America plays against Victoria Azarenka of Belarus during Day 4 of the Bank of the West Classic at the Taube Family Tennis Stadiumon July 31 in Stanford, California. Photo by Noah Graham/Getty Images 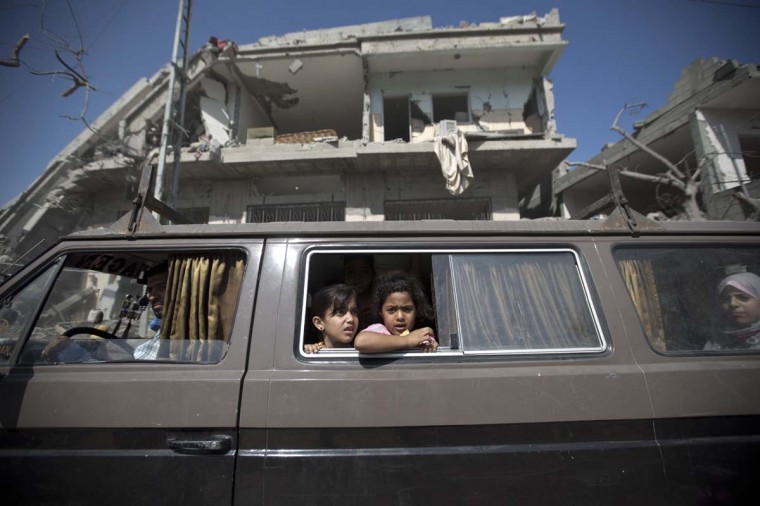 Palestinians who were displaced from their houses due fighting between Israel’s army and Hamas fighters return to check their homes in Gaza City’s Shejaiya neighbourhood, on August 1. Israeli shelling killed eight people in Gaza today just hours into a three-day truce, medics said, as a diplomatic push for a more durable end to the bloodshed gained pace. It gave a brief respite to residents of the battered strip, after 25 days of violence that killed 1,459 on the Palestinian side, mostly civilians, and 61 soldiers and three civilians on the Israeli side. || CREDIT: MAHMUD HAMS – AFP/GETTY IMAGES 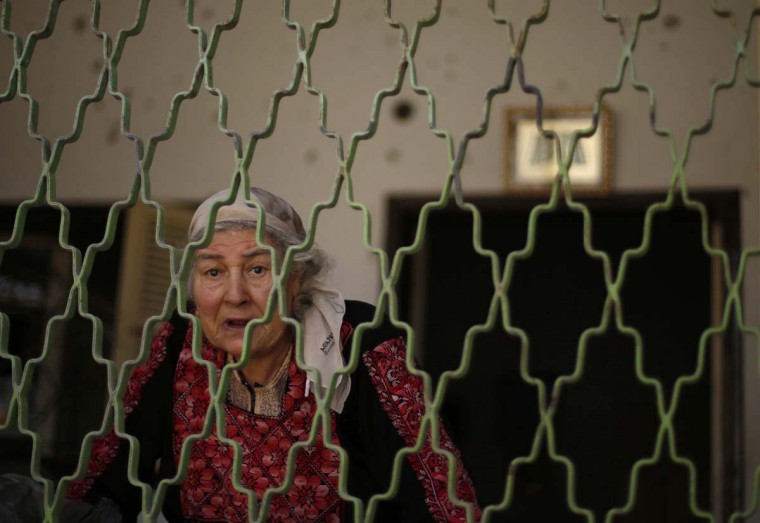 A Palestinian woman looks out from her damaged house in Beit Hanoun town, which witnesses said was heavily hit by Israeli shelling and air strikes during an Israeli offensive, in the northern Gaza Strip August 1. A three-day ceasefire between Israel and Palestinian militant groups in the Gaza Strip went into effect on Friday, with negotiators due to travel to Cairo to discuss a longer-term solution. But some two hours after the truce began, a Reuters photographer and the Gaza Interior Ministry said Israeli tanks opened fire in the southern Rafah area, and Hamas media reported four people were killed. The Israeli military had no immediate comment. || PHOTO CREDIT: SUHAIB SALEM – REUTERS 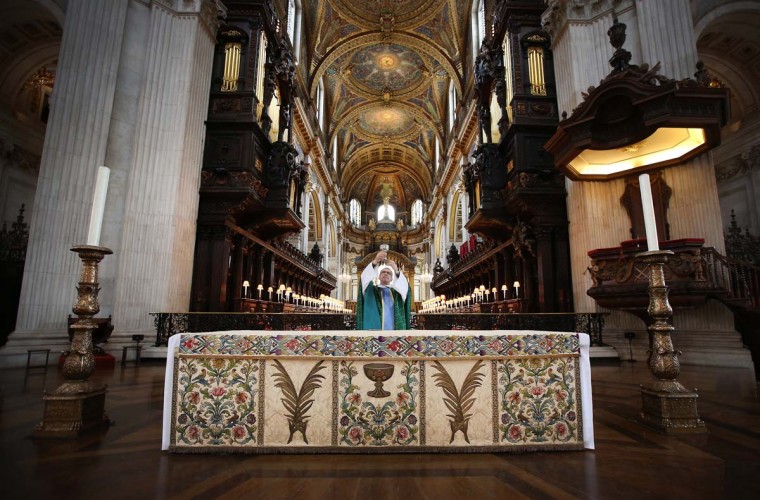 Canon Michael Hampel holds a chalice above an historic embroidered alter frontal at St Paul’s Cathedral on August 1, in London, England. The altar frontal which was made for St Pauls Cathedral by severely injured World War One servicemen is being displayed in for the first time in 70 years to mark the Centenary of the War. A special service will be held on Sunday August 3, at which the altar frontal will be used for the first time since the 1940s. Relatives of some of the men will be present, including two surviving children from the UK, and numerous members of one family from Canada. (Photo by Peter Macdiarmid/Getty Images) 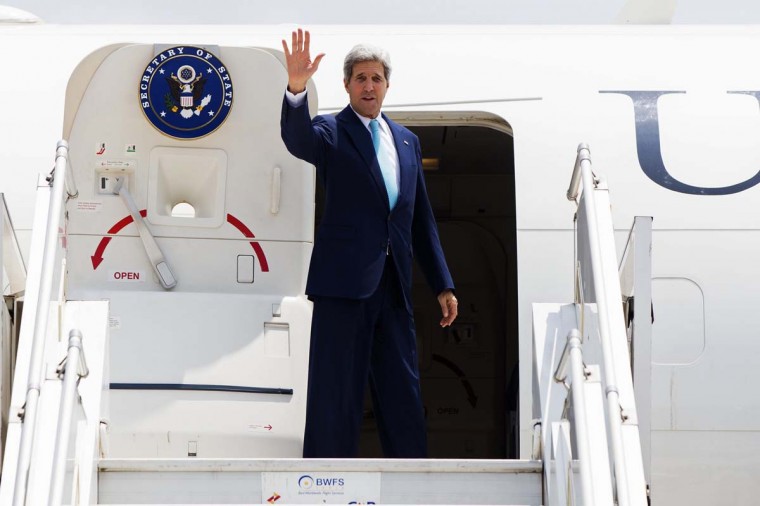 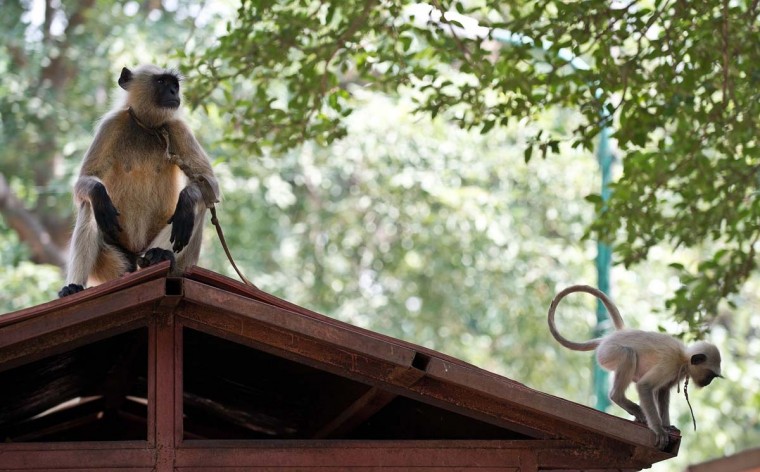 A langur monkey waits for its handler while a juvenile plays on the roof of a cabin at Parliament house in New Delhi on August 1. The presence of the old world monkeys, taken care of by hired handlers, are used as a method to scare off feral monkeys and dogs in the compounds of Parliament House. || CREDIT: PRAKASH SINGH – AFP/GETTY IMAGES 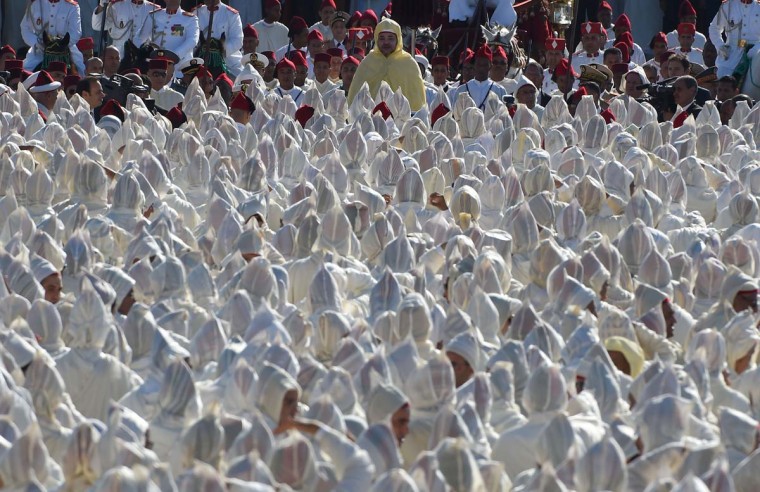 Moroccan King Mohammed VI greets the crowd as he stands in a limousine during a ceremony of allegiance, at the King’s palace in Rabat, on July 31, to mark the 15th anniversary of Mohammed VI ‘s accession to the throne. || CREDIT: FADEL SENNA – AFP/GETTY IMAGES 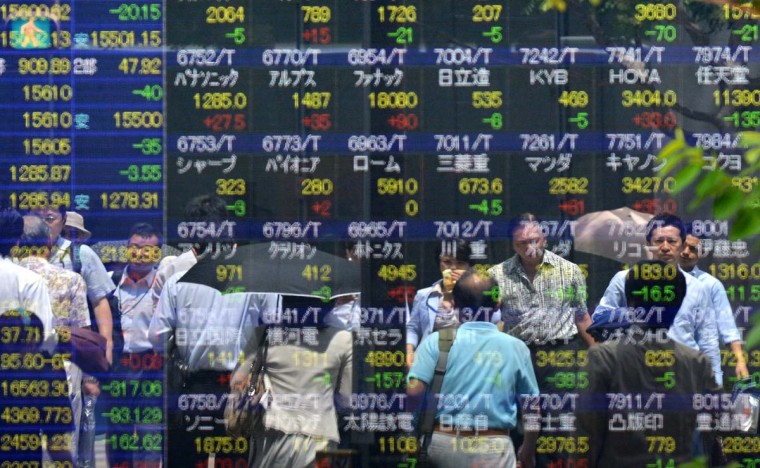 Pedestrians in reflection walk past a share prices board of the Tokyo Stock Exchange in Tokyo on August 1. Tokyo stocks opened 0.70 percent lower on August 1, following a sell-off on Wall Street on weak eurozone data, the Argentine debt default and other negative news. || CREDIT: KAZUHIRO NOGI – AFP/GETTY IMAGES 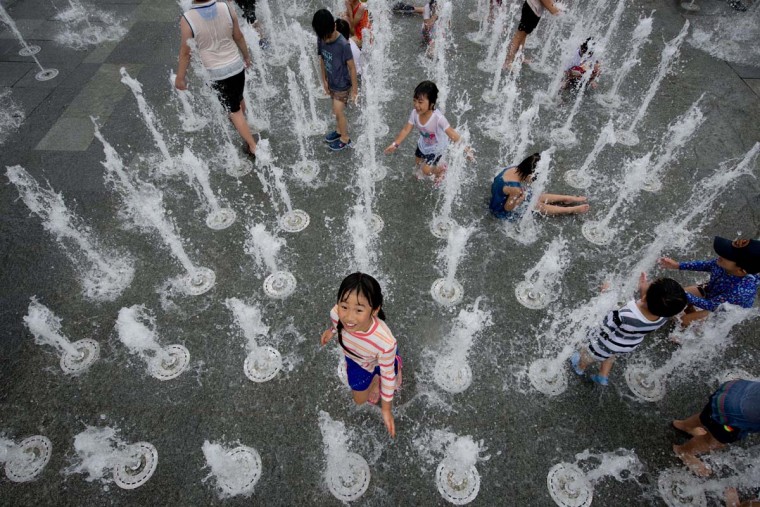 Children play in a fountain to cool off in central Seoul on August 1. South Korea’s state weather agency issued a heat wave warning for Seoul for the first time this year, advising people to stay indoors. Heat wave warnings are issued when the daytime high is expected to stay above 35 C (95F) for two or more consecutive days, according to state media. || CREDIT: ED JONES – AFP/GETTY IMAGES 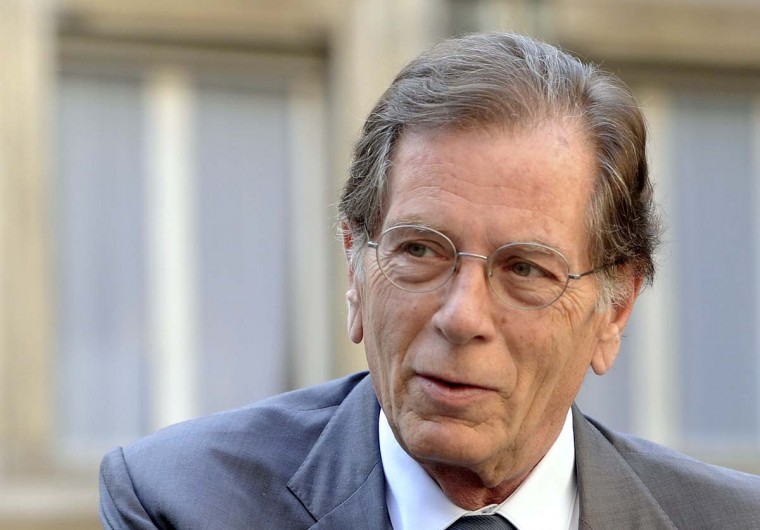 Ambassador and chief of the Palestinian mission to France Hael al Fahoum arrives at the Interior ministry before a meeting with French Interior Minister on August 1 in Paris. || CREDIT: DOMINIQUE FAGET – AFP/GETTY IMAGES 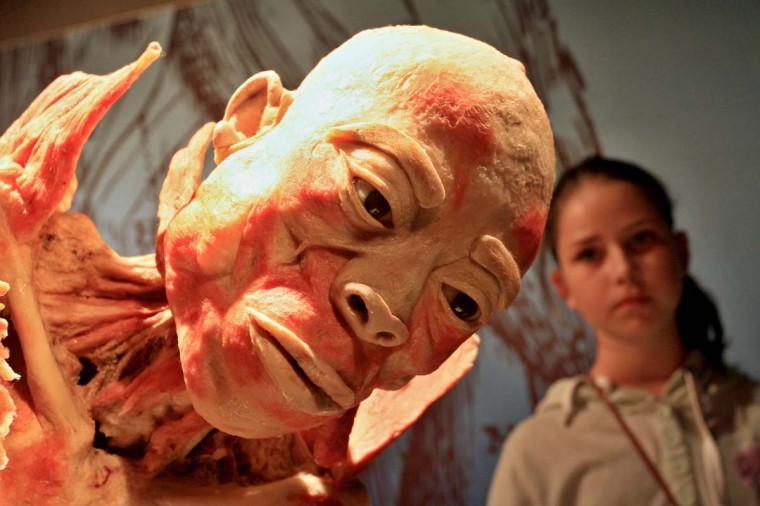 A girl looks at an exhibit at the show “Bodies Revealed” after it opened on August 1 in Brno, Czech Republic. The exhibition presenting human bodies that have been preserved through a polymer preservation process is running until November 30, 2014. || CREDIT: RADEK MICA – AFP/GETTY IMAGES 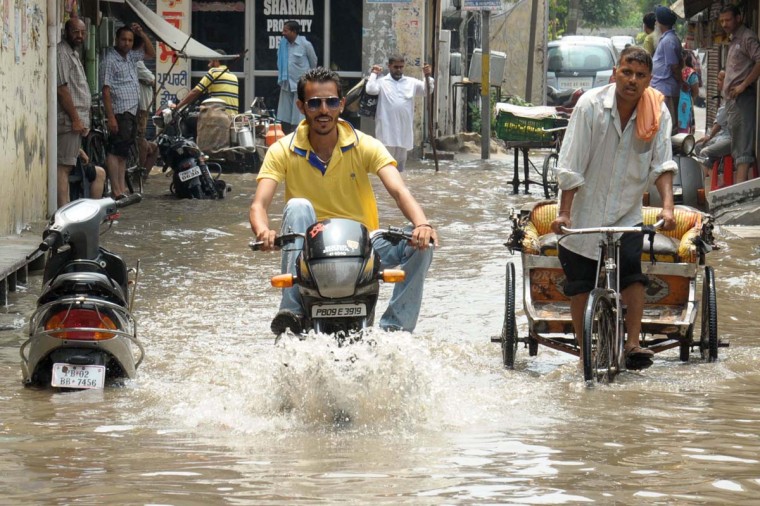 Indian commuters make their way along a flooded street after a heavy downpour in Amritsar on August 1. The northern Punjab state has witnessed about 55 per cent deficiency in rainfall in July, an official of the Punjab Agriculture department said. || CREDIT: NARINDER NANU – AFP/GETTY IMAGES 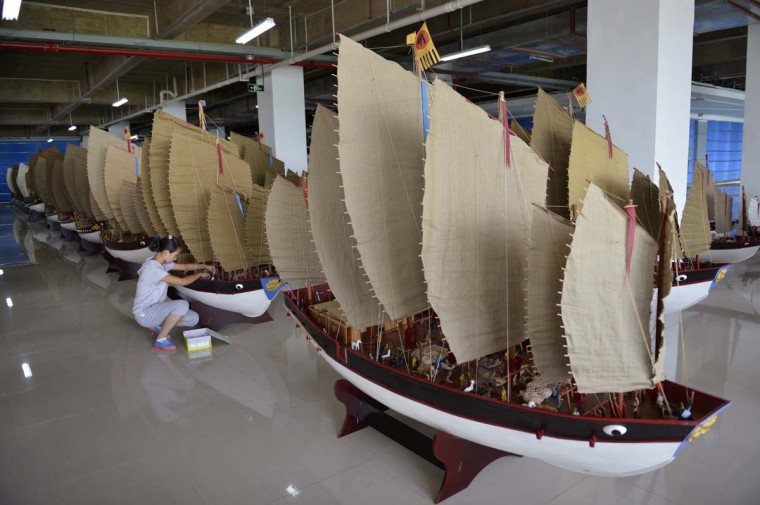 A woman polishes models of the full fleet led by Ming Dynasty eunuch explorer Cheng Ho, also known as Zheng He, in Kunming, Yunnan province, July 11. Cheng completed seven voyages between 1405 and 1433 that took him as far as the mouth of the Red Sea and the east coast of Africa. He led a huge fleet of more than 100 ships and 25,000 men to 30 countries. As an admirer of Cheng, Jin, with the help of craftsmen, spent several million yuan in building the models in the past three years. Picture taken July 11, 2014. || PHOTO CREDIT: STRINGER – REUTERS 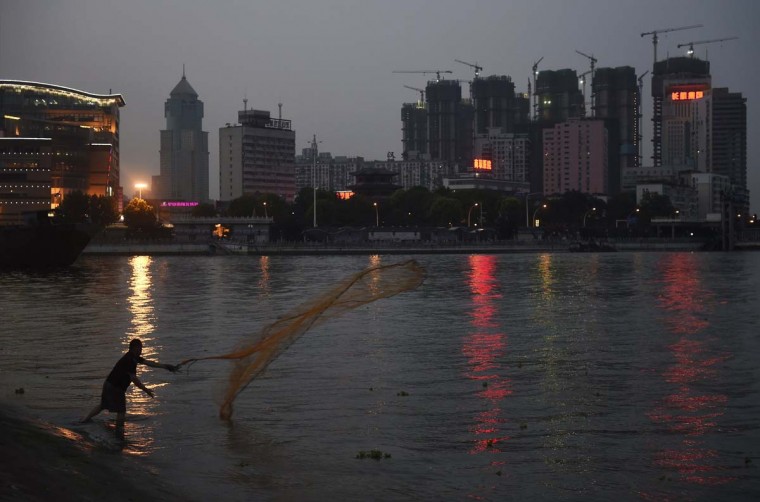 A man casts a net by the side of a river next to a construction site of new residential buildings in Wuhan, Hubei province, July 31. Activity in China’s vast factory sector expanded at the fastest pace in 27 months in July on stronger demand, a government survey showed, adding to evidence that the economy is regaining momentum after a burst of government stimulus measures. Picture taken July 31, 2014. || PHOTO CREDIT: STRINGER – REUTERS 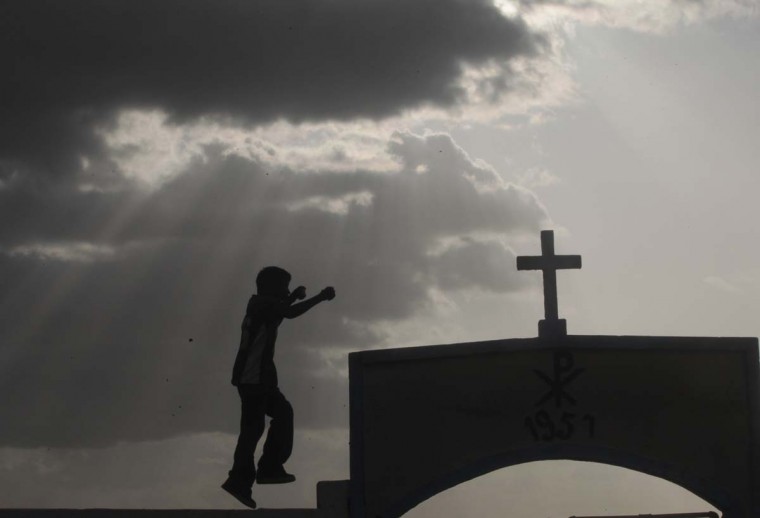 A boy jumps near a cross during a celebration of the patron saint of Managua, Santo Domingo de Guzman, in Managua July 31. || PHOTO CREDIT: OSWALDO RIVAS – REUTERS 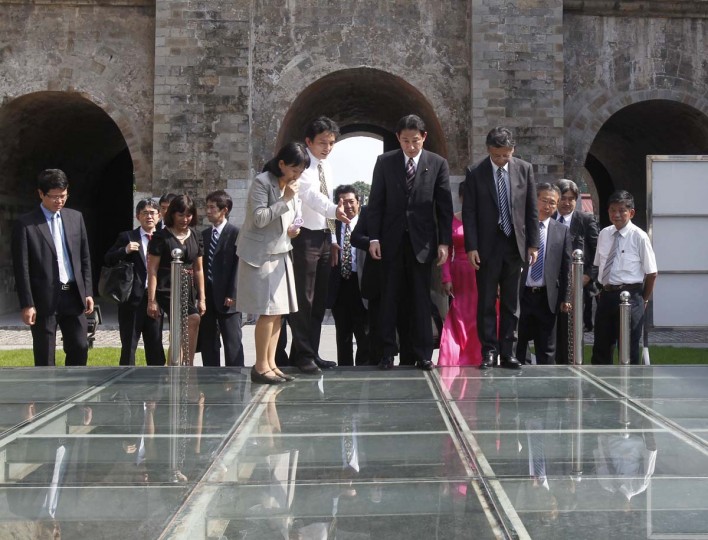 Japan’s Foreign Minister Fumio Kishida (front 2nd R) is guided as he visits Thang Long citadel, a former royal palace from the 11th century, in Hanoi August 1. Kishida is in Hanoi on a three-day visit to Vietnam from July 31 to August 2. || PHOTO CREDIT: KHAM – REUTERS 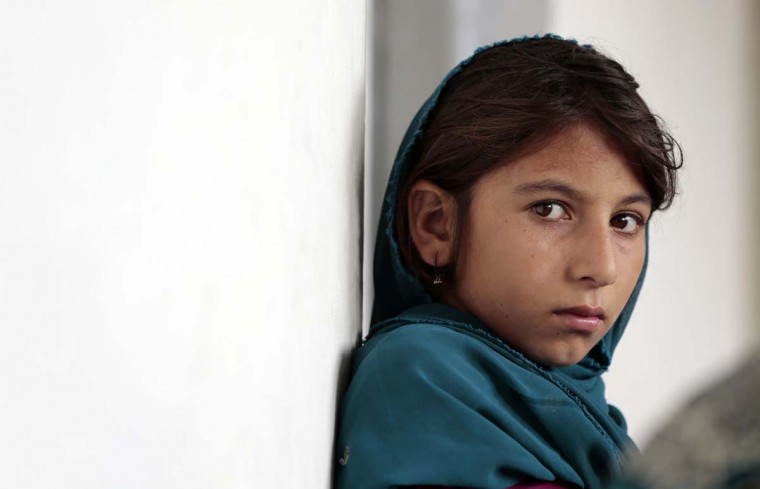 An internally displaced woman from North Waziristan living temporarily at a school watches as a Reuters correspondent interviews refugees in Bannu, in northwest Pakistan July 25. Thousands of women displaced by fighting in Pakistan are struggling to get food and other aid because they lack identity cards and conservative Muslim elders have forbidden them from going to distribution centres. To match Feature PAKISTAN-WOMEN/AID Picture taken July 25, 2014. || PHOTO CREDIT: CAREN FIROUZ – REUTERS