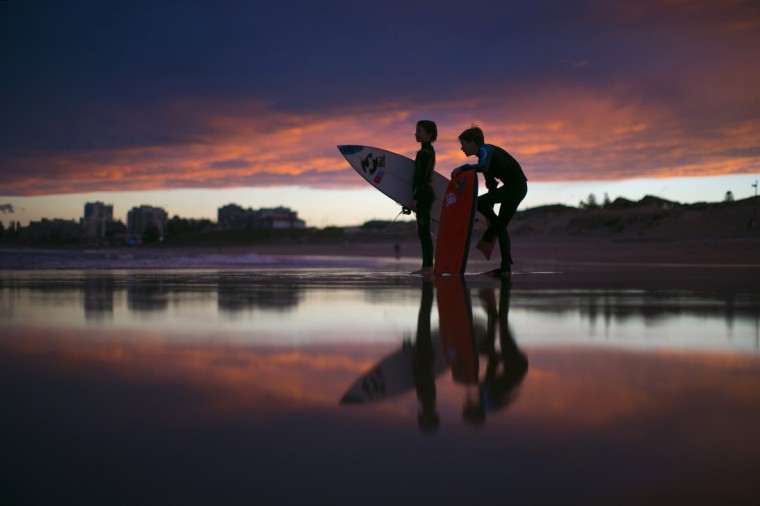 Young surfers, nicknamed ‘grommets’ in local surfing parlance, wait for their friends to finish a post-sunset session on the waves off Wanda Beach in Sydney. Many of Sydney’s famed beaches remain popular with surfers during the southern hemisphere winter months despite early sunsets and cooler ocean temperatures. (Jason Reed/Reuters) 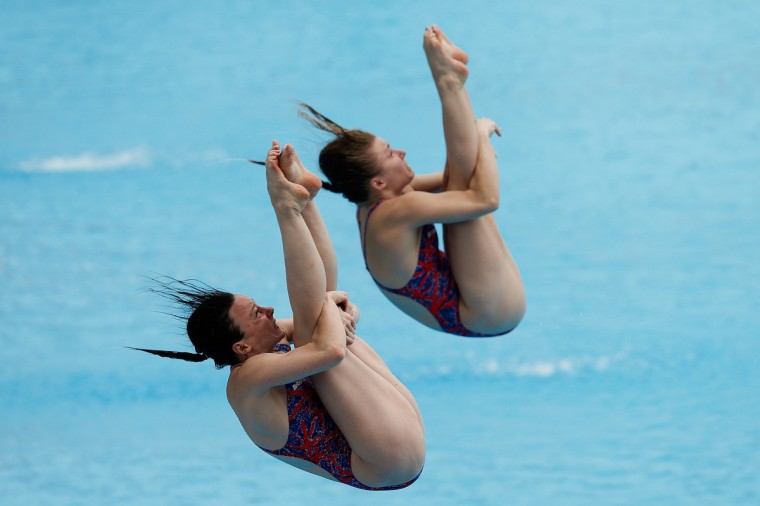 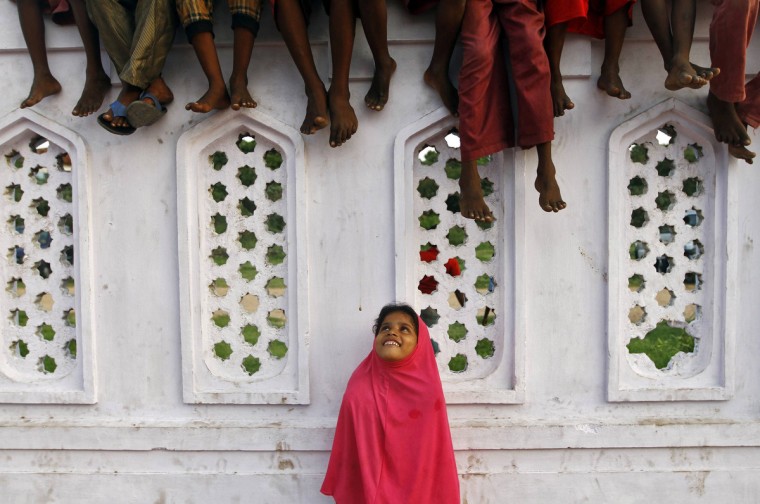 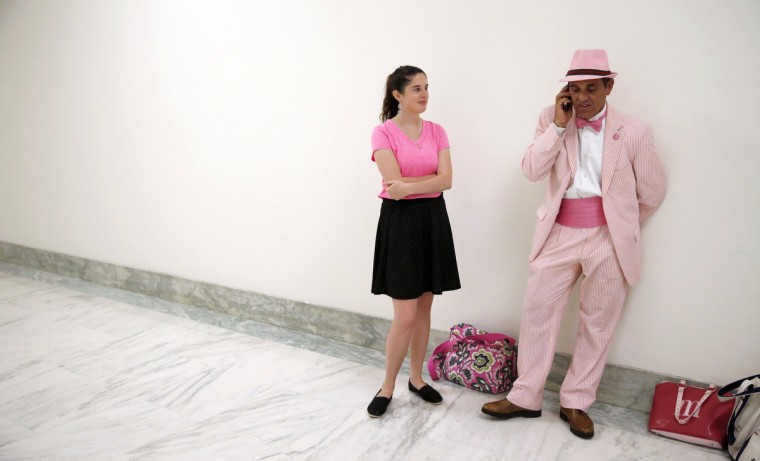 Code Pink anti-war protesters stand in the hallway as they await to attend a House Armed Services Committee hearing on Capitol Hill in Washington. (Kevin Lamarque/Reuters) 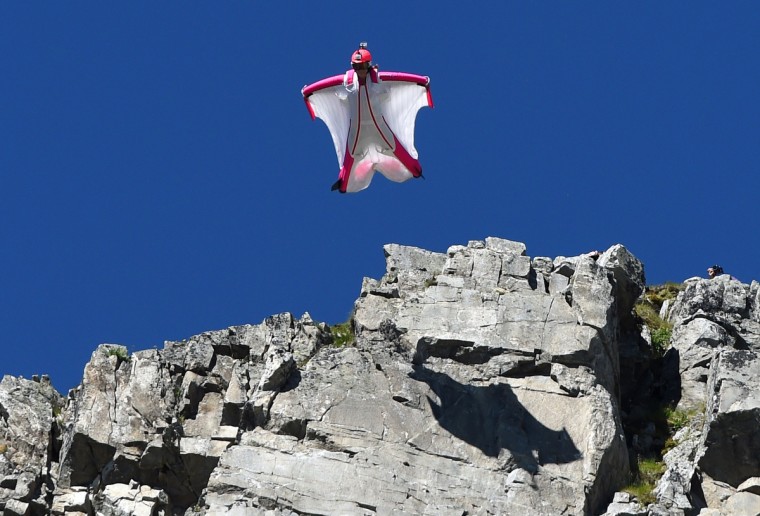 Switzerland’s Geraldine Fasnacht jumps from the top of the Brevent mountain to fly in wingsuit over the French ski resort of Chamonix. (Phillippe Desmazes/Getty Images) 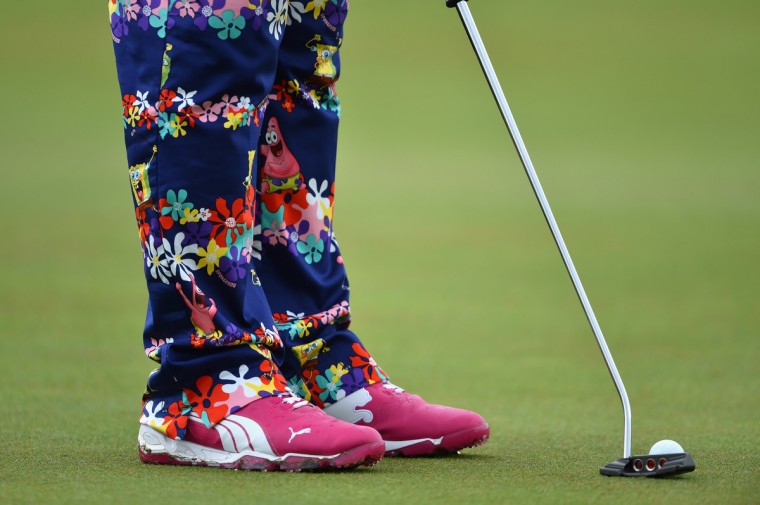 Detail of John Daly of the United States’ outfit during a practice round prior to the start of The 143rd Open Championship at Royal Liverpool in Hoylake, England. (Stuart Franklin/Getty Images) 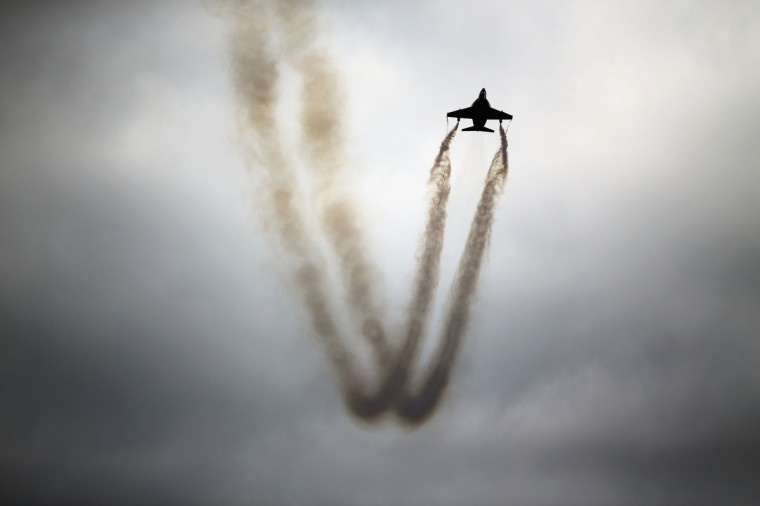 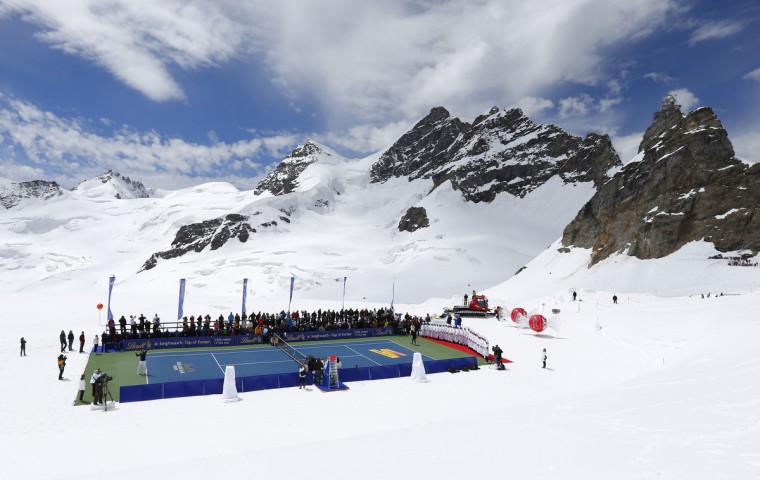 Swiss tennis player Roger Federer (L) serves a ball to U.S. skier Lindsey Vonn during a promotional tennis event on the Aletsch glacier at the Jungfraujoch. The world number three and the Alpine skiing champion played on a specially prepared tennis court on a glacier at an altitude of 3475 m (11401 feet). (Denis Balibouse/Reuters) 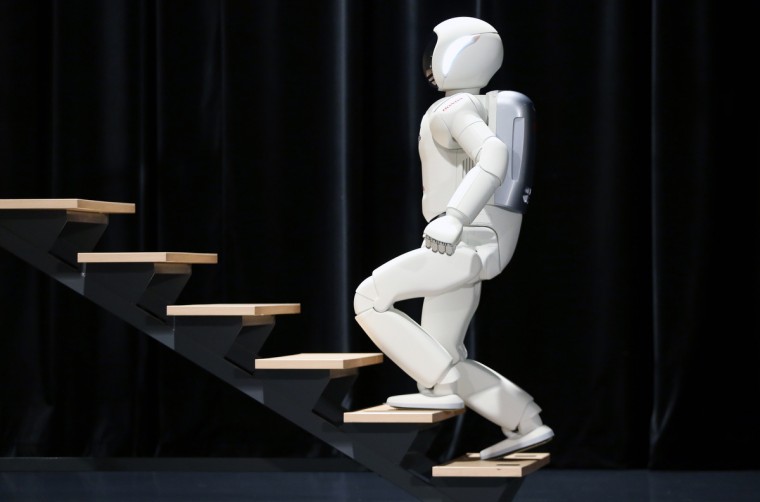 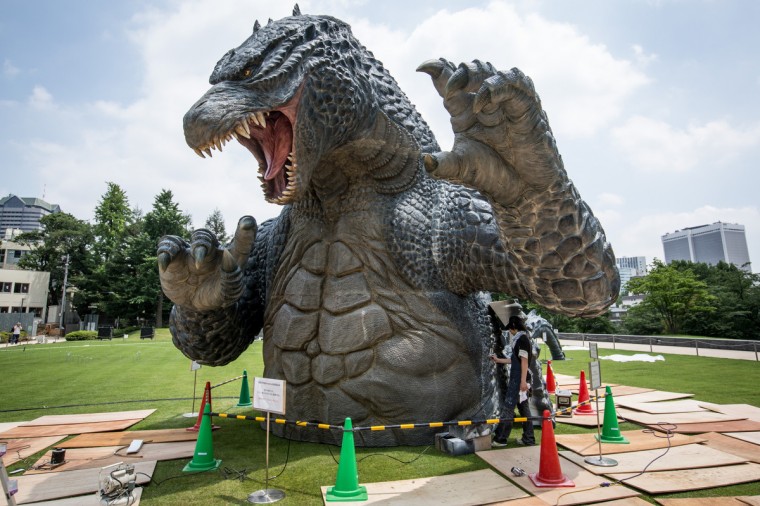 Crewmember Tetsuo Hayashi airbrushes the final touches to a 6.6 meter replica of the famous Godzilla at Tokyo Midtownin Tokyo, Japan. The “MIDTOWN Meets GODZILLA” project is in collaboration with the Japan release of the Hollywood film version of “Godzilla” The Godzilla built on the lawns of Tokyo Midtown will host a light show every night complete with mist, audio and fire rays. (Chris McGrath/Getty Images) 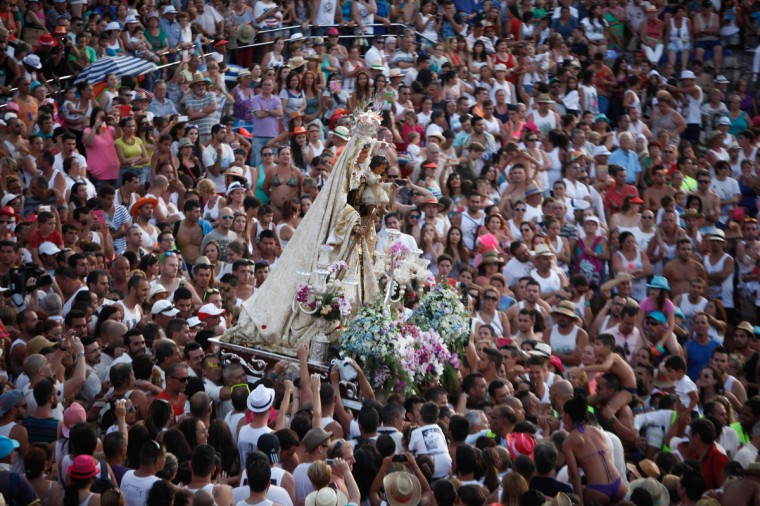 Penitents carry a statue of the Virgen del Carmen, the patron saint of fishermen, as thousands of people attend the procession at the Puerto de la Cruz on the Spanish Canary island of Tenerife. Every year, local residents of the resort carry the statue of the Virgin from its chapel to a small beach in the fishing habor. Once at the beach, the fishermen put the statue on board a decorated boat and the statue sails along the coast. (Desiree Martin/Getty Images) 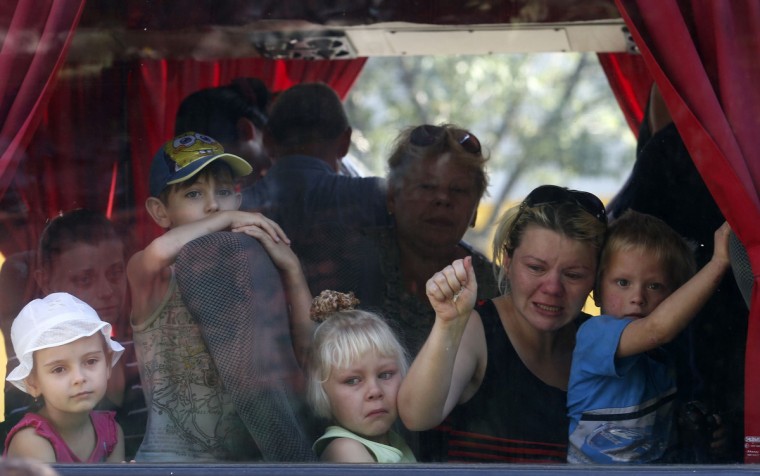 Residents of the eastern Ukrainian region of Donetsk look out of a bus window as they prepare to depart for Russia to escape the fighting between the Ukrainian army and pro-Russian rebels at a collection point in Donetsk. (Maxim Zmeyev/Reuters) 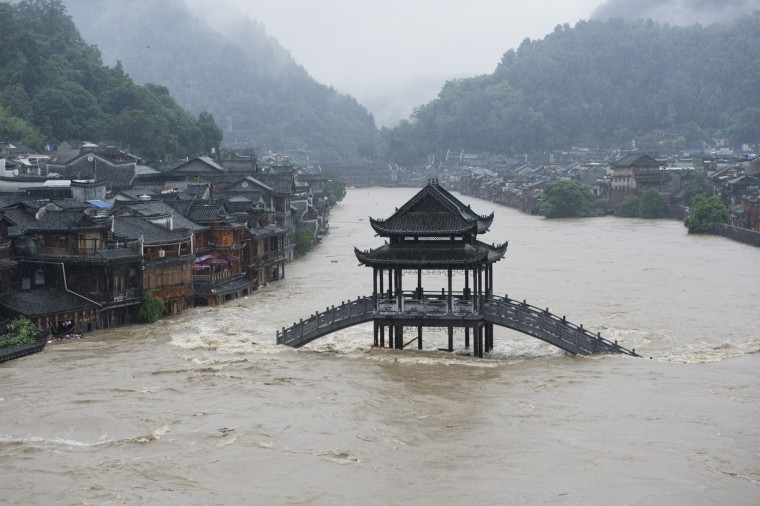 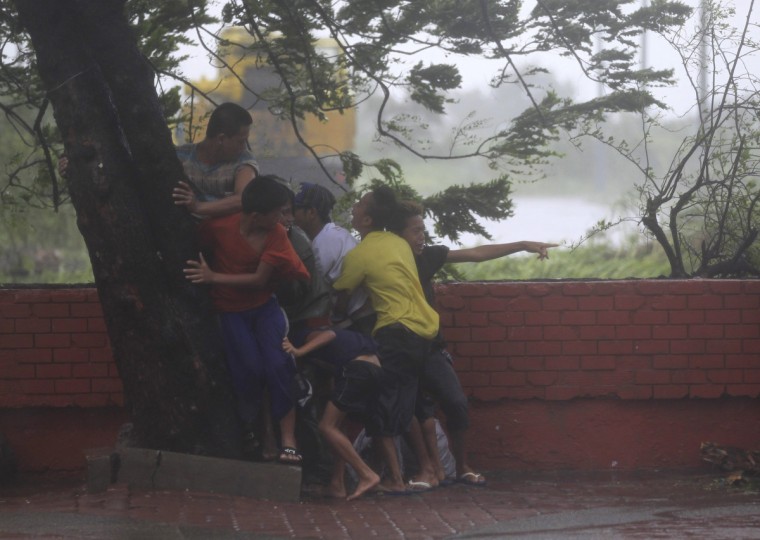 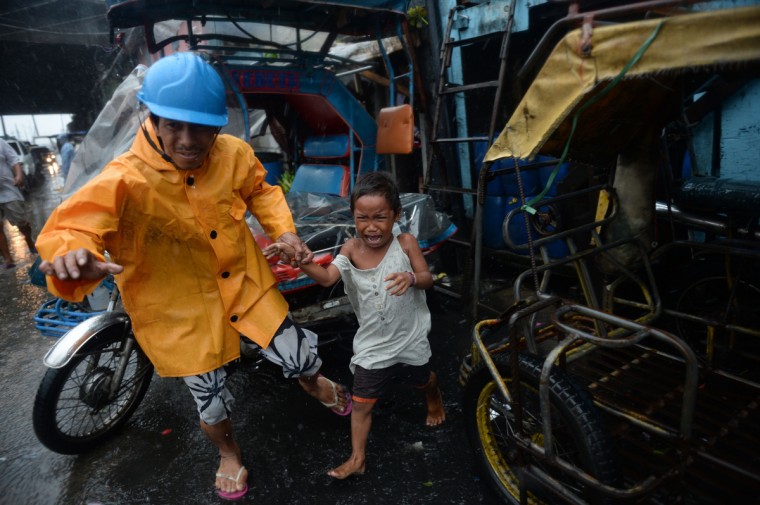 A village official leads a child as he is evacuated from their house at an informal settlers’ area as Typhoon Rammasun barrels across Manila on. Typhoon Rammasun shut down the Philippine capital on July 16 as authorities said the first major storm of the country’s brutal rainy season claimed at least one life and forced hundreds of thousands to evacuate. (Ted Aljibe/Getty Images) 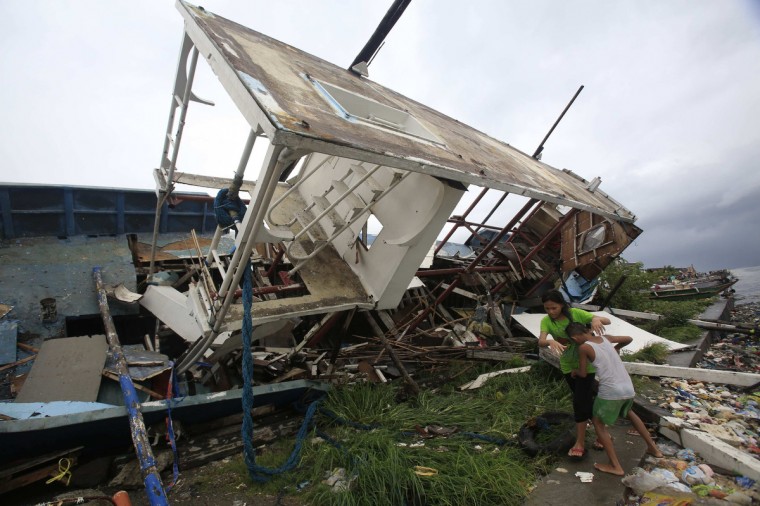 Residents walk beside a boat destroyed by strong winds brought by Typhoon Rammasun that battered the coastal bay of Baseco compound, metro Manila. Typhoon Rammasun killed at least 10 people as it churned across the Philippines and hit the capital, prompting the evacuation of almost more than 370,000 people and shutting financial markets, offices and schools, rescue officials said on Wednesday. (Romeo Ranoco/Reuters) 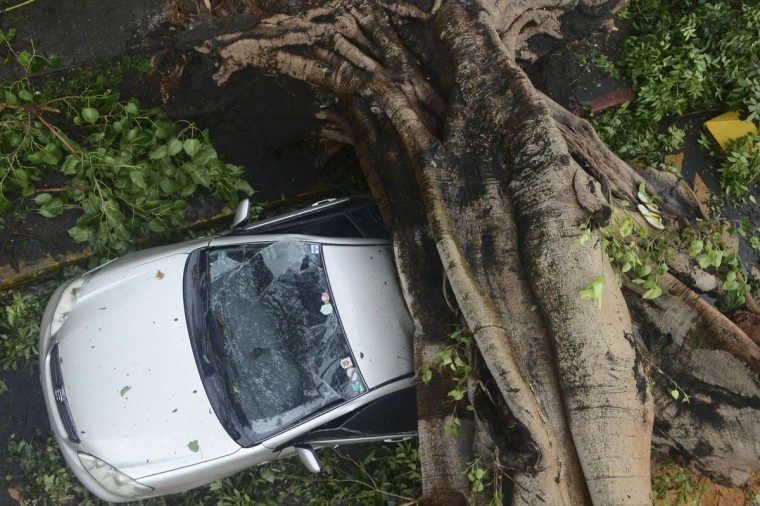 A huge tree crushes a car during the onslaught of Typhoon Rammasun, (locally named Glenda) that hit Makati city in Manila. The typhoon killed at least 10 people as it churned across the Philippines and shut down the capital, cutting power and prompting the evacuation of almost more than 370,000 people, rescue officials said on Wednesday. (Mark DeMayo/Reuters) 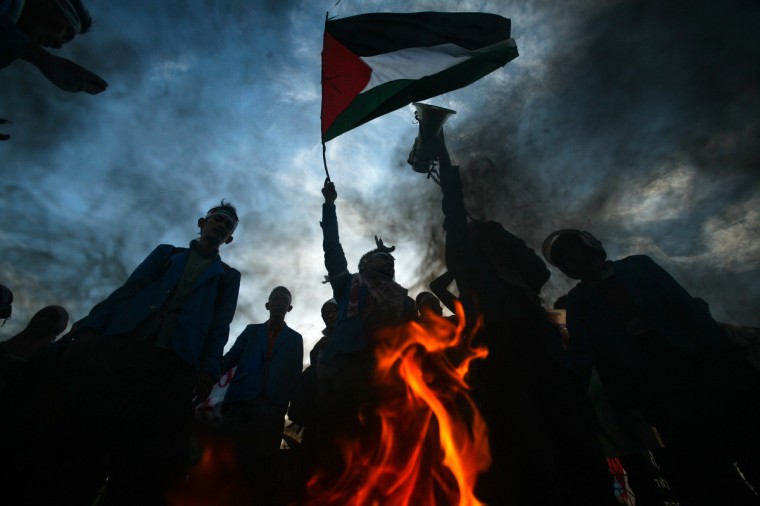 Indonesian demonstrators raise the Palestinian flag while they burn an Israeli and US flag during a demonstration in Banda Aceh, on Sumatra island on, condemning Israel’s offensive in Gaza. Israel urged 100,000 Gazans to flee their homes on July 16, but the warning was largely ignored despite an intensification of the military’s nine-day campaign after Hamas snubbed a ceasefire effort. Indonesia with a population of about 220 million is the world’s most populous Muslim-majority country. (Chaideer Mahyuddin/Getty Images) 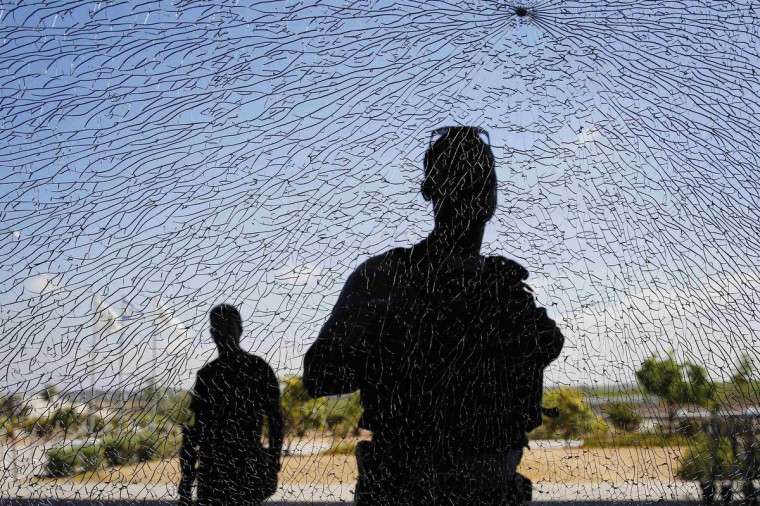 Israeli security personnel look at a window damaged by shrapnel after a short-range rocket landed on Tuesday near the Erez crossing. An Israeli civilian was killed by the rocket fired from the Gaza Strip on Tuesday, the military said, the first Israeli fatality in more than a week of fighting with Palestinian militants. The Islamist group Hamas that rules Gaza claimed responsibility for launching the short-range rocket that struck an area along the border with Gaza. (Finbarr O’Reilly/Reuters) 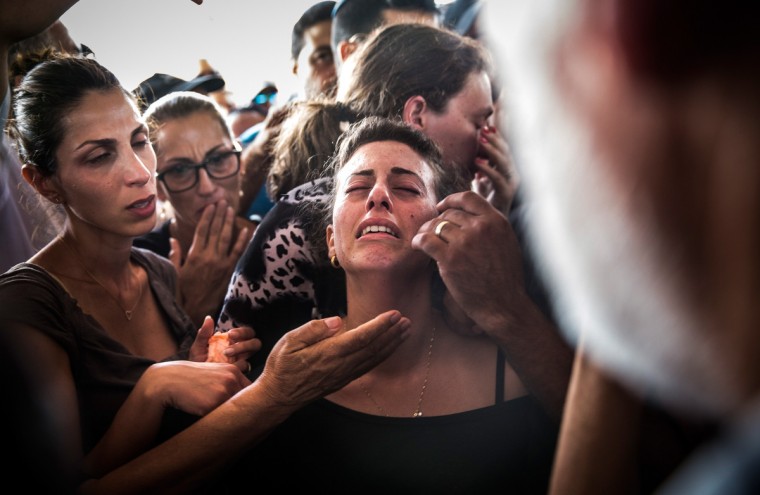 People mourn during the funeral of Dror Khenin at a cemetery in Yahud Monoson, Israel. Yesterday Khenin was the first Israeli to be killed by a Hamas motar as he offered food to Israeli soldiers working near the Erez border crossing between Israel and Gaza. As Operation “Decisive Edge” enters its ninth day, over 200 Palestinians have been killed in Israeli missile strikes. (Andrew Burton/Getty Images) 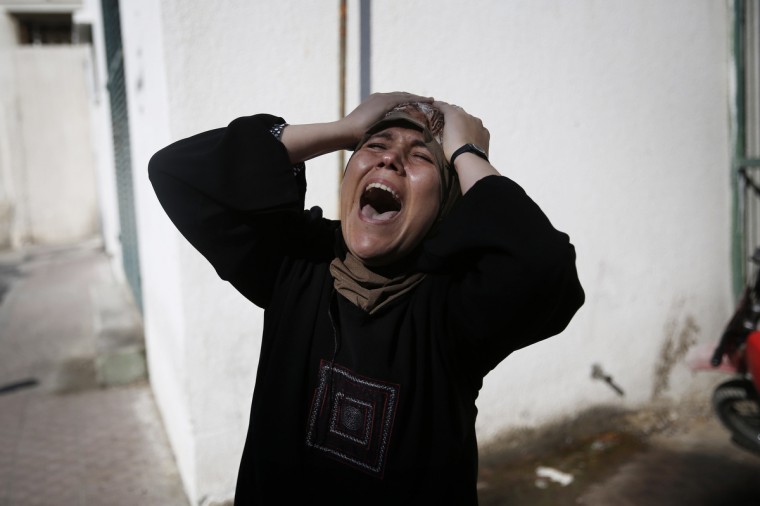 The mother of one of the four Palestinian children from the Baker family, whom medics said were killed by a shell fired by an Israeli naval gunboat, grieves outside the morgue in Gaza City. The four Palestinian children were killed and another child was critically wounded on a Gaza beach on Wednesday by the shell fired by the Israeli naval gunboat, a Palestinian health official said. Asked about the incident, an Israeli military spokesman in Tel Aviv said he was checking the report. Gaza health officials said 207 Palestinians, most of them civilians, had been killed in air and naval barrages, in the worst flareup of Israeli-Palestinian violence in two years. One Israeli has been killed by shelling from Gaza that has made a race to shelter a daily routine for hundreds of thousands in Israel. (Finbarr O’Reilly/Reuters) 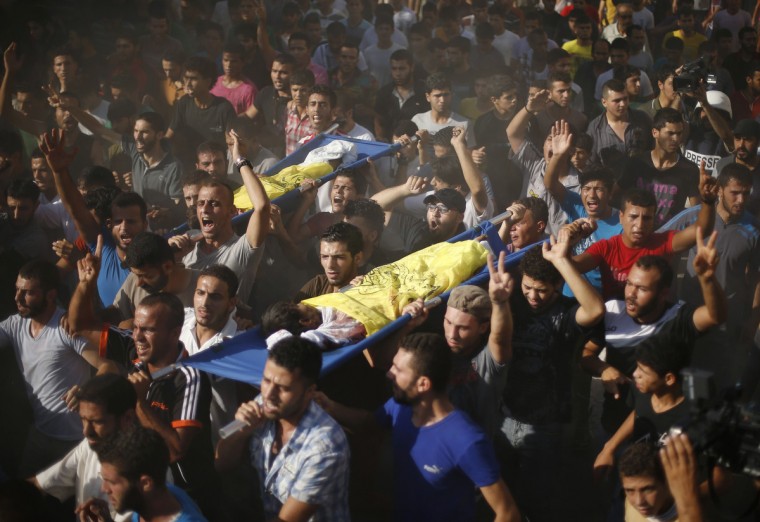 Palestinians carry the bodies of two boys from the Baker family, whom medics said were killed with other two children from the same family by a shell fired by an Israeli naval gunboat, during their funeral in Gaza City. Four Palestinian children were killed and one was critically wounded on a Gaza beach on Wednesday by the shell fired by the Israeli naval gunboat, a Palestinian health official said. Asked about the incident, an Israeli military spokesman in Tel Aviv said he was checking the report. Gaza health officials said 207 Palestinians, most of them civilians, had been killed in air and naval barrages, in the worst flareup of Israeli-Palestinian violence in two years. One Israeli has been killed by shelling from Gaza that has made a race to shelter a daily routine for hundreds of thousands in Israel. (Mohammed Salem/Reuters) 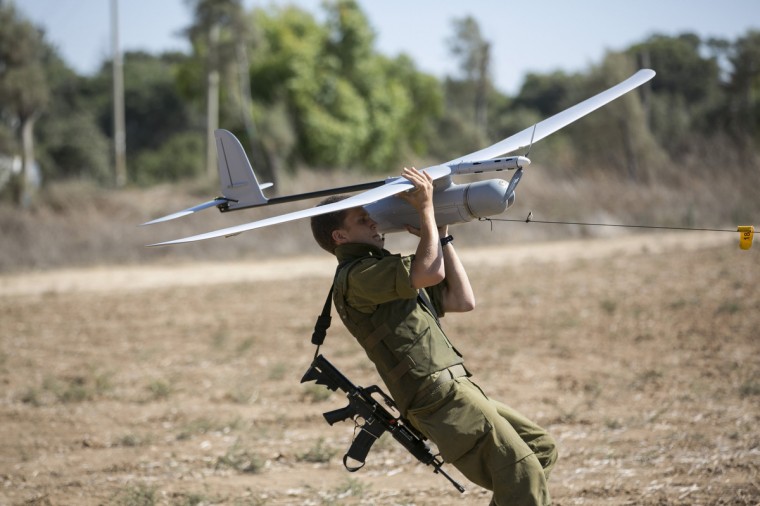 An Israeli soldier launches a Skylark unmanned aerial vehicle near the Israeli-Gaza Border. Israel on Wednesday agreed to a proposed six-hour cessation of hostilities in the Gaza Strip for humanitarian reasons, a Israeli senior official told Reuters. The official, speaking on condition of anonymity, said it had not yet been decided when the lull would take place. Hamas had no immediate comment. (Baz Ratner/Reuters) 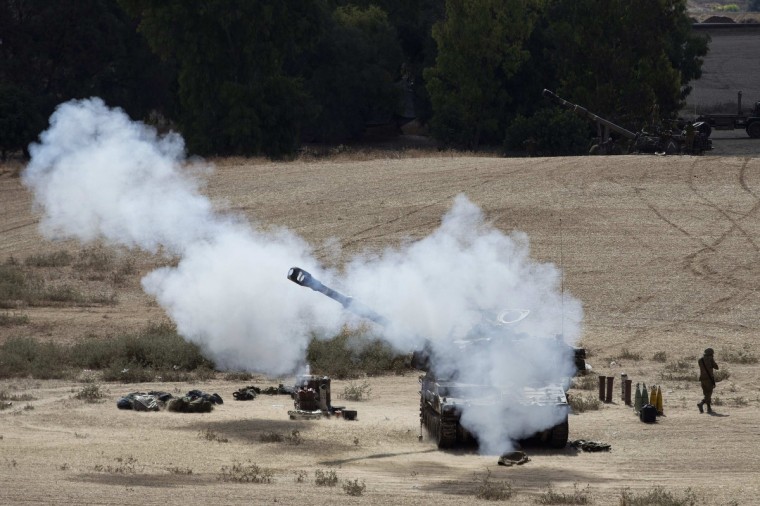 An Israeli mobile artillery unit fires towards Gaza from outside the central Gaza Strip. Israeli shelling killed four boys on a Gaza beach on Wednesday, a local health official said, and Palestinian militants fired a further 70 rockets into Israel after a failed Egyptian attempt to halt more than a week of warfare. (Baz Ratner/Reuters) 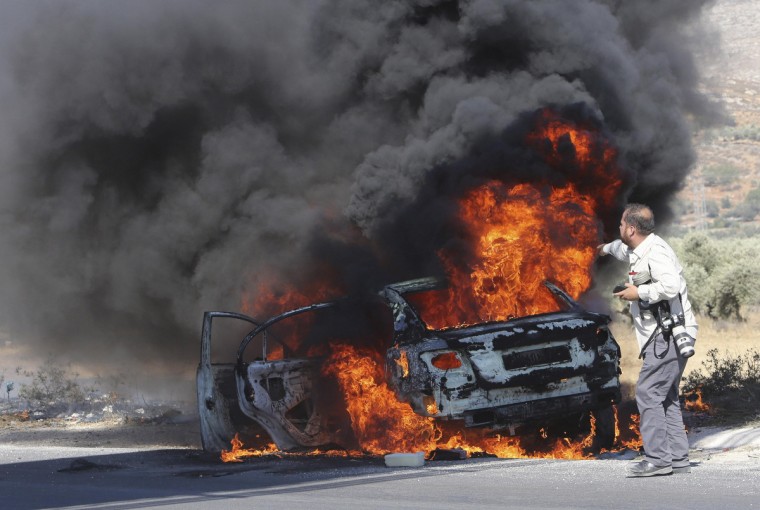 AFP photographer Jaafar Ishtayeh looks at his burning car after it was hit by tear gas canisters fired by Israeli soldiers, during a protest by Palestinians against Israeli air strikes in Gaza strip, at Hawara checkpoint near the West Bank city of Nablus. Ishtayeh, a Palestinian, was at the scene to provide coverage of the protest. (Abed Omar Qusini/Reuters) 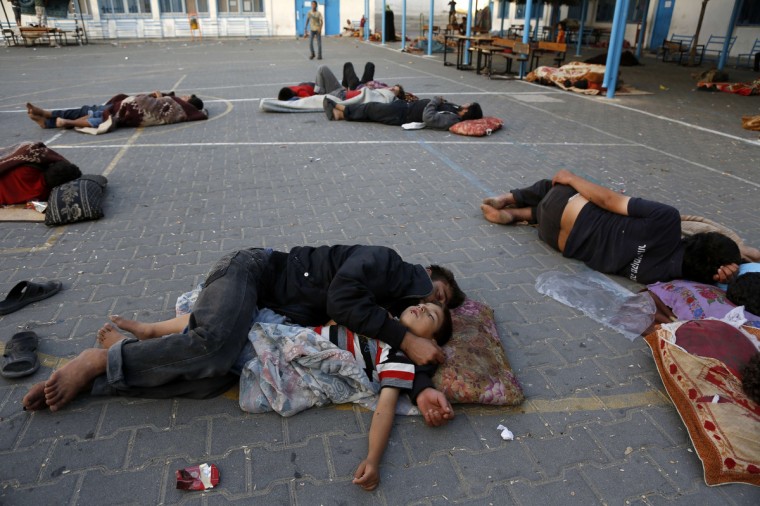 Palestinians sleep at the yard of a UN school in the northern Gaza Strip town of Beit Lahiya early on, after evacuating their houses near the border with Israel. The Israeli army has warned some 100,000 Palestinians in the eastern Gaza Strip to evacuate their homes, military sources said. Since July 8, militants have fired nearly 1,000 rockets and mortars into the Jewish state, and Israel has carried out around 1,500 strikes against targets inside Gaza. (Mohammed Abed/Getty Images)