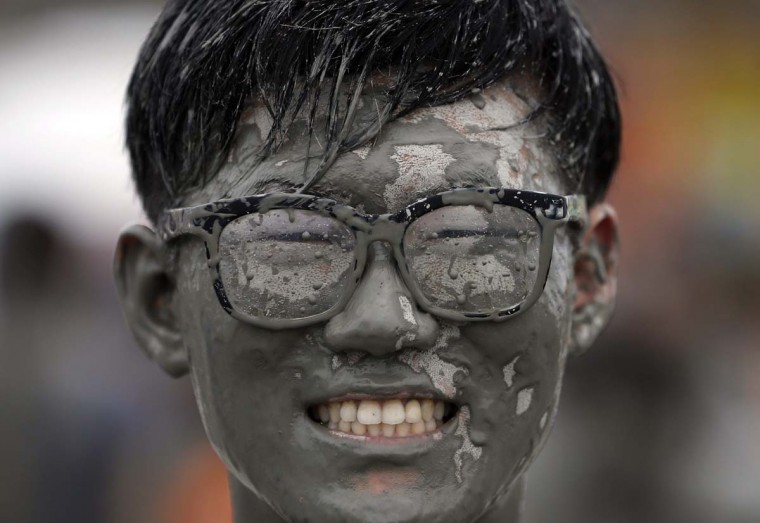 A tourist poses for photographs as he plays in the mud during the Boryeong Mud Festival at Daecheon beach in Boryeong July 18. About 2 to 3 million domestic and international tourists visit the beach during the annual mud festival, according to the festival organisers. || PHOTO CREDIT: KIM HONG-JI – REUTERS 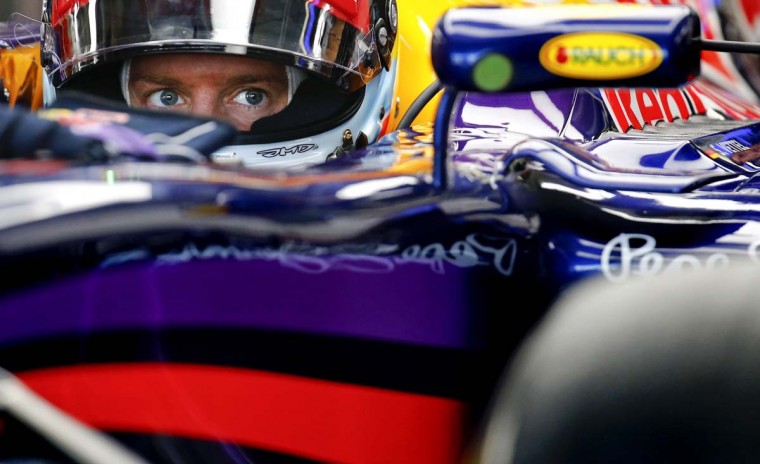 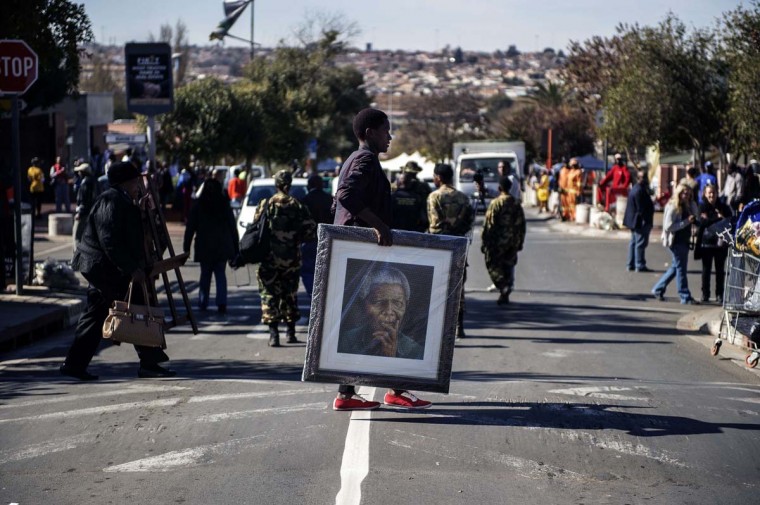 A woman carries a painting portraying the late Nelson Mandela outisde his former house in Soweto as various activities marking International Mandela Day take place in front of the house turned museum of the late global Icon Nelson Mandela on July 18 in Johannesburg. Mandela Day is a global call to action that celebrates the idea that each individual has the power to transform the world, the ability to make an impact. Two decades after Mr. Mandela’s election by the South African parliament, activists in Malta have been fined for their use of a banner reading “stop Israeli Apartheid” according to news outlet Malta Today.|| CREDIT: GIANLUIGI GUERCIA – AFP/GETTY IMAGES 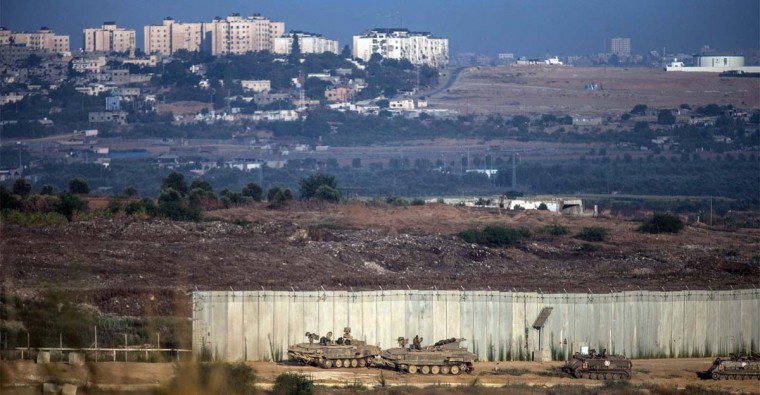 Israeli tanks sit positioned next to a gap in the wall seperating Gaza and Israel on the morning July 18, near Sderot, Israel. Late last night the Israel operation “Protective Edge” sent troops into Gaza, officially turning the offensive into a ground operation. Photo by Andrew Burton/Getty Images 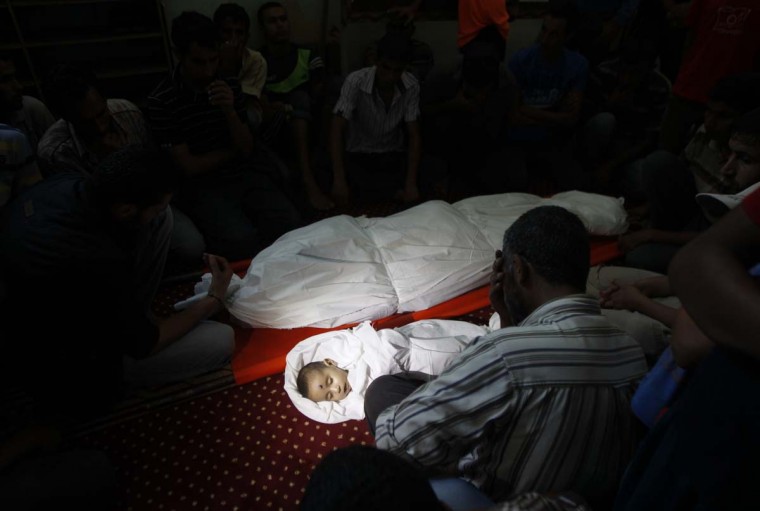 Palestinian mourners gather around the body of five-month-old Fares al-Mahmum and another victim of Israeli bombardment during their funeral on July 18, in Rafah, in the southern Gaza Strip. The Palestinian infant was one of five people killed by Israeli fire in separate incidents in the southern city, as Israel pressed a ground offensive on the 11th day of a massive operation. || CREDIT: SAID KHATIB – AFP/GETTY IMAGES 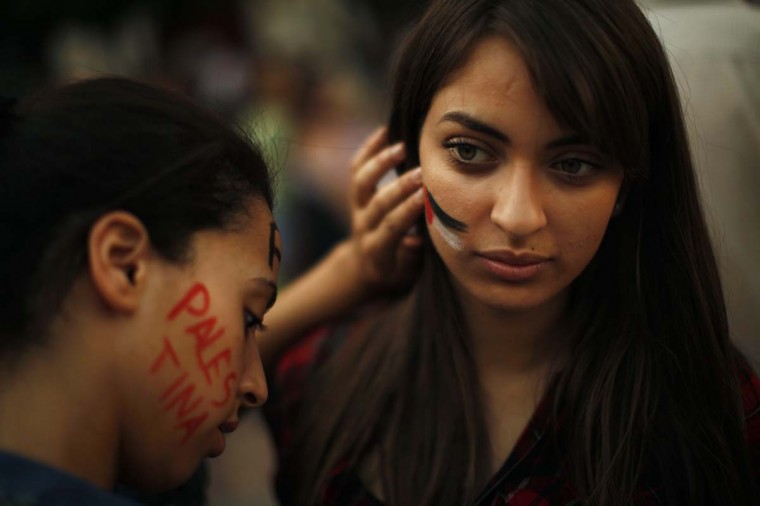 A Morrocan woman paints the Palestinian flag on the face of a compatriot during a protest against Israel’s military action in Gaza, at La Constitucion square in Malaga, southern Spain, July 17. Israeli Prime Minister Benjamin Netanyahu on Thursday instructed the military to begin a ground offensive in Gaza, an official statement from his office said. The Israeli military says Gaza militants have fired more than 1,300 rockets into Israel. Palestinian health officials say 233 Palestinians have been killed in Israeli air and naval strikes. The International Business Times today reported that the Israeli death toll during the two-week conflict stood at 2. || PHOTO CREDIT: JON NAZCA – REUTERS 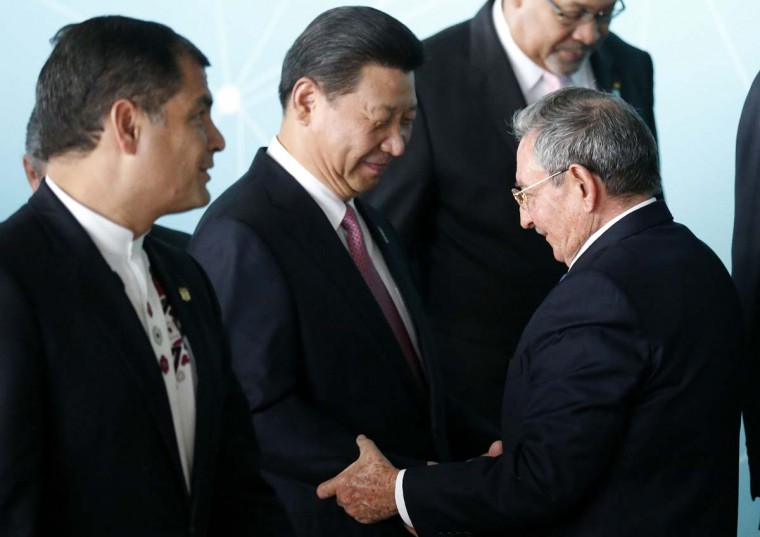 Ecuador’s President Rafael Correa (at left) looks on during a meeting of China and Community of Latin American and Caribbean States (CELAC) on July 17. Ecuador announced Thursday that it was calling in its ambassador to Israel, according to La Informacion and El Universo. || PHOTO CREDIT: SERGIO MORAES – REUTERS 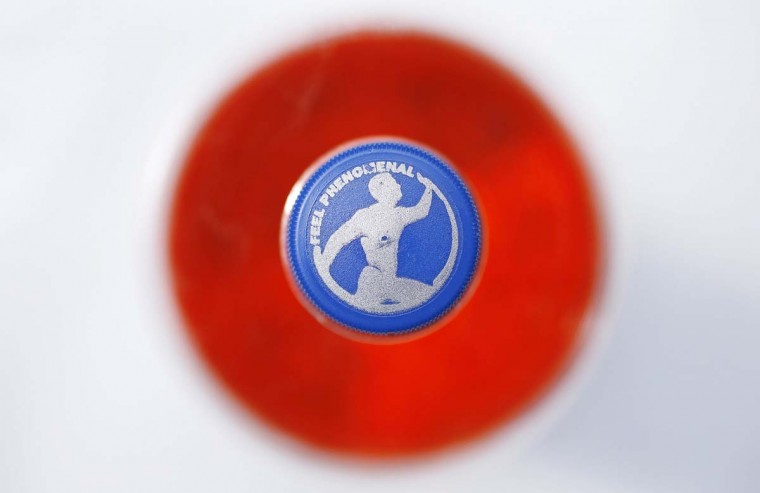 A bottle of Irn-Bru is seen in Edinburgh, Scotland May 2. Irn-Bru has been manufactured since 1901, the manufacturer, A. G. Barr, describes the soda as “Scotlandís ‘other national drink.'” Scottish separatists are closing the gap on their unionist rivals as a September independence referendum draws nearer, according to a poll. But pollster TNS said it would still be a “major task” for them to draw level in time. In a poll of 995 adults, TNS found that support for the pro-independence campaign had grown by two points to 32 percent compared with last month, while the campaign to reject independence had slipped back a point to 41 percent. In the run-up to the vote, Reuters photographer Suzanne Plunkett took a series of close-up pictures of food, drink and various objects typically associated with Scotland. || PHOTO CREDIT: SUZANNE PLUNKETT – REUTERS 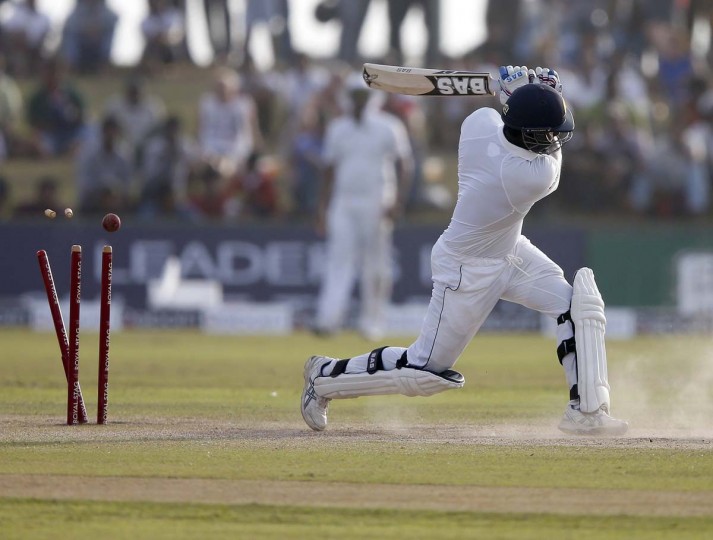 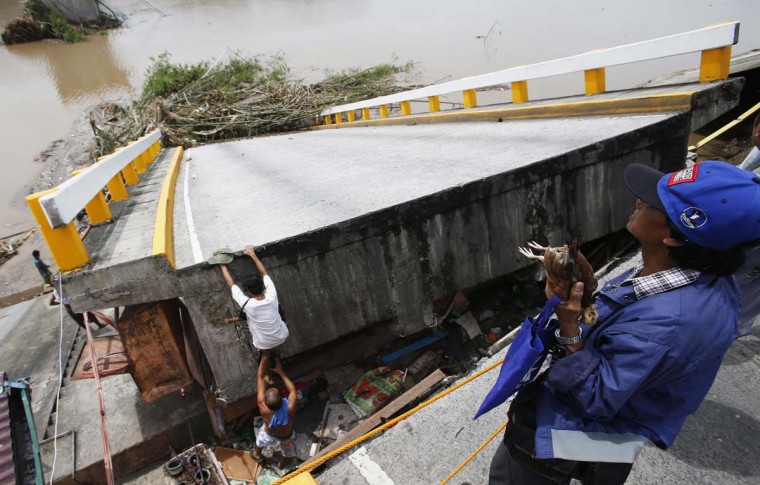 A resident climbs on a bridge destroyed during the onslaught of Typhoon Rammasun, (locally named Glenda) in Batangas city south of Manila, July 17. The Philippines set to work clearing debris, reconnecting power and rebuilding flattened houses on Thursday after a typhoon swept across the country killing 38 people, with at least eight missing, rescue officials said. Typhoon Rammasun, the strongest storm to hit the Philippines this year, was heading towards China after cutting a path across the main island of Luzon, shutting down the capital and knocking down trees and power lines, causing widespread blackouts. || PHOTO CREDIT: ERIK DE CASTRO – REUTERS 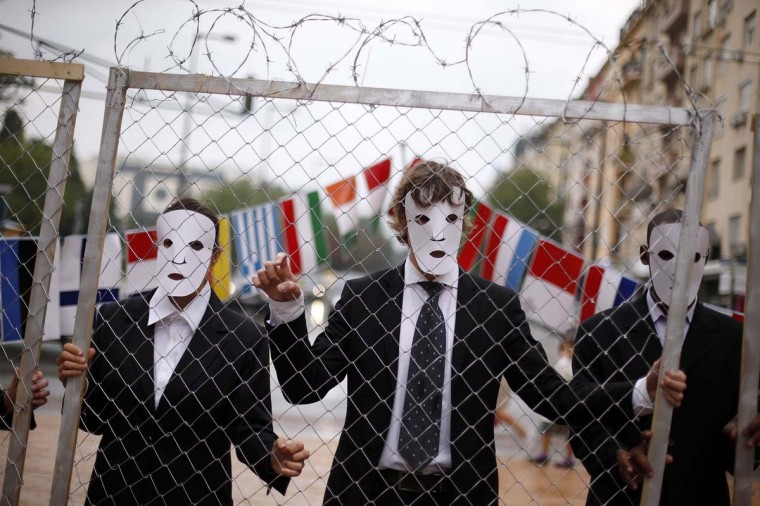 Activists participate in a demonstration organised by Amnesty International in central Sofia July 18. Some 70 activists from over 20 countries took part in the demonstration as part of Amnesty International’s “S.O.S. Europe” campaign for the human rights of migrants, refugees and asylum-seekers in Europe and its borders, according to organisers. || PHOTO CREDIT: STOYAN NENOV – REUTERS 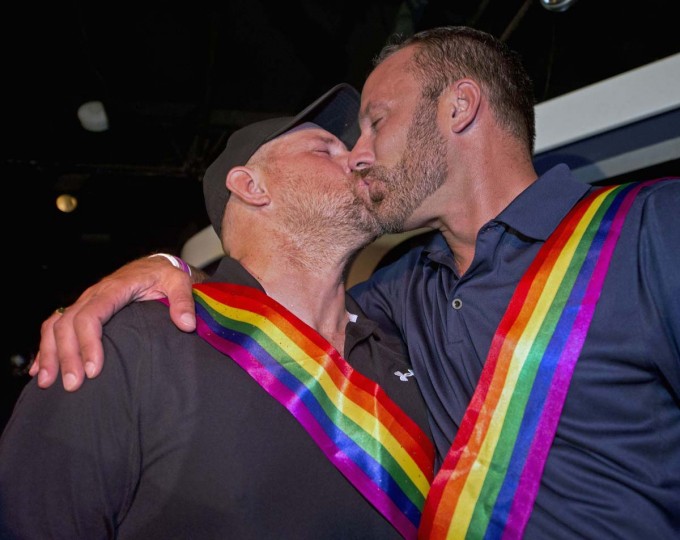 William Lee Jones (L) and Aaron Huntsman kiss during a celebration in Key West, Forida in this handout photo provided by the Florida Keys News Bureau July 17, 2014. Jones, Huntsman and about 100 other people marked a Florida Keys judge’s ruling overturning Florida’s ban on same-sex marriage on Thursday after the couple’s legal challenge, the latest in a string of court rulings across the United States voiding the state laws that restrict the right of same-sex couples to marry. || PHOTO CREDIT: ANDY NEWMAN/FLORIDA KEYS NEWS BUREAU/HANDOUT VIA REUTERS – REUTERS 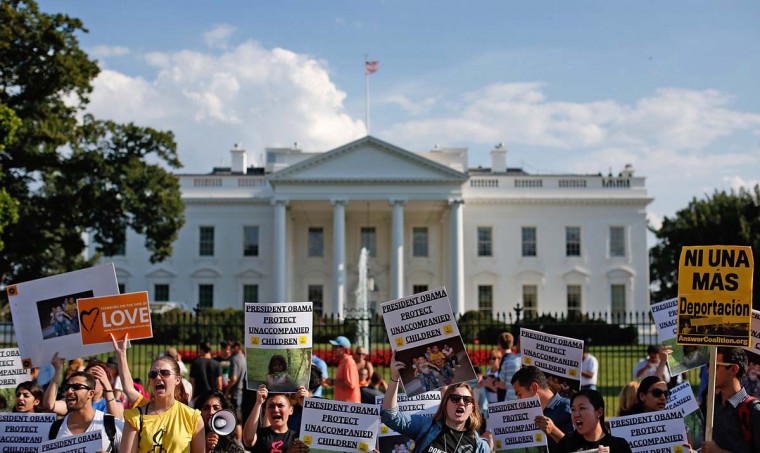 Immigration reform protesters gather in front of the White House on July 17, 2014 in Washington, DC. The protest was organized by Amnesty International to push the message “Don’t Send Unaccompanied Migrant Children Back.” Amnesty International and the protestors want to demand that President Obama protect the rights of unaccompanied migrant children, some as young as five years old, who are crossing the southwest border of the United States. Reportedly these children are fleeing organized crime, gang violence and insecurity from many Central American countries. Reports also state that many of these children are survivors of sexual violence and at higher risk of kidnapping, trafficking and other serious human rights abuses. (Photo by Win McNamee/Getty Images) 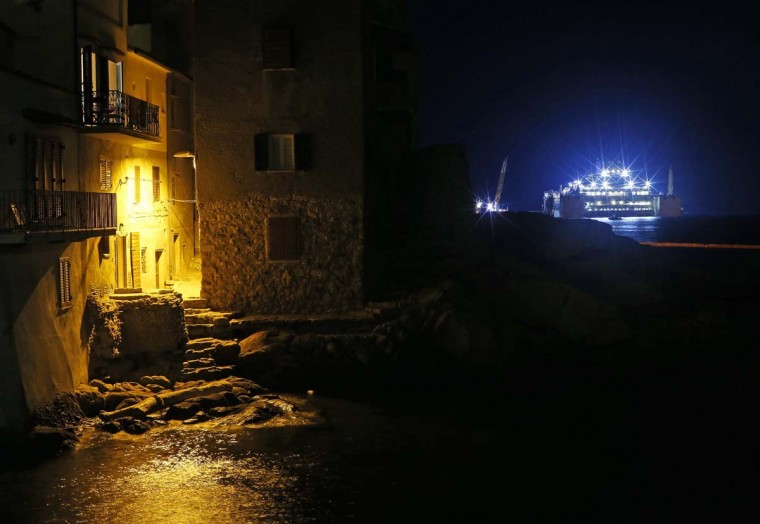 The Costa Concordia (R) cruise liner is seen at Giglio harbour at Giglio Island, early July 18, 2014. Preparations to tow away the Costa Concordia continued on the Italian island of Giglio on Thursday, with engineers connecting the last chains and cables to the sponsons, the large metal boxes attached to the wreck. The wrecked luxury liner is expected be towed away next Monday from the Italian island where it sank two and half years ago, killing 32 people. || PHOTO CREDIT: ALESSANDRO BIANCHI – REUTERS